Feel 100% satisfied with your purchase -- with no restocking fees & no return shipping costs* within 30 days of delivery. Learn More
This item is currently out of stock and it may or may not be restocked.
Out of Stock
Add To ListFound on 44 wish lists 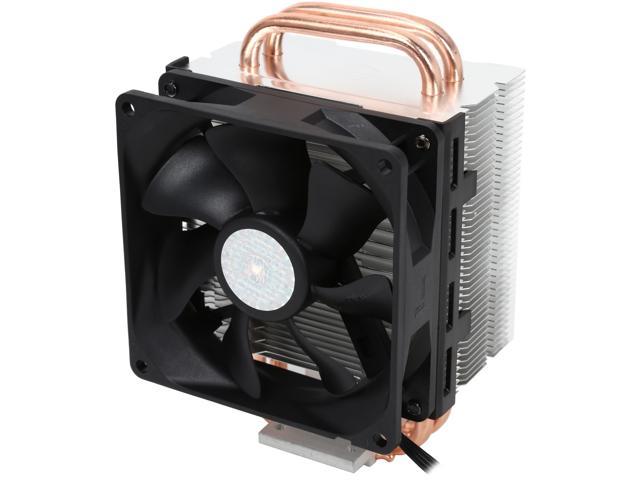 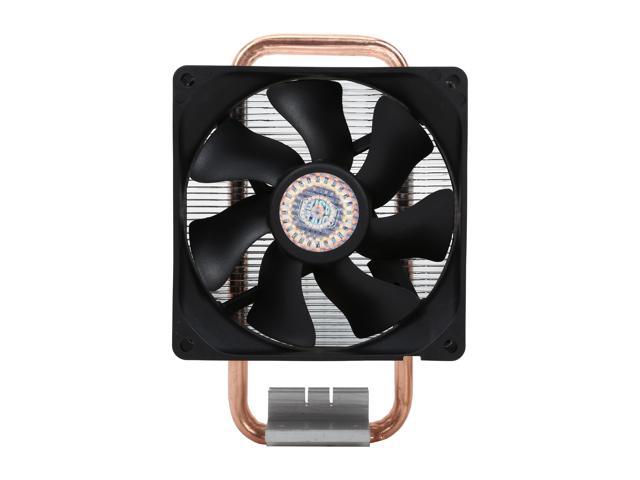 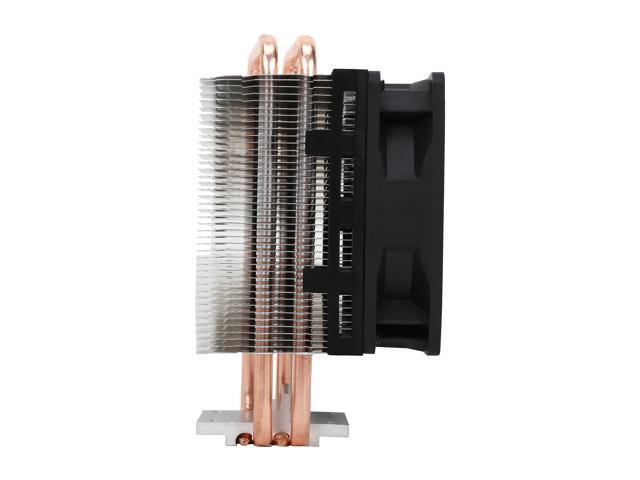 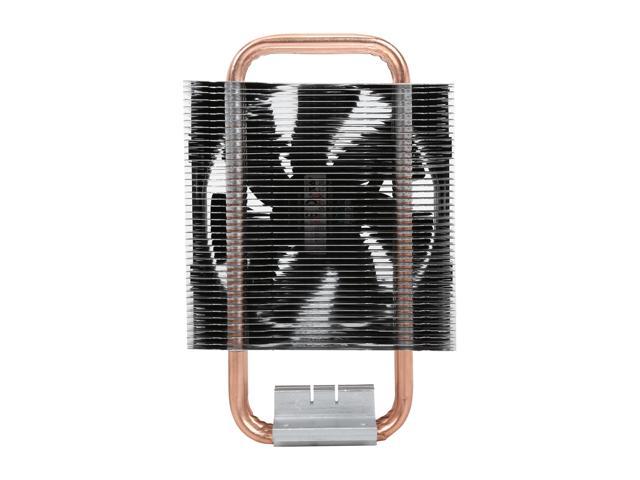 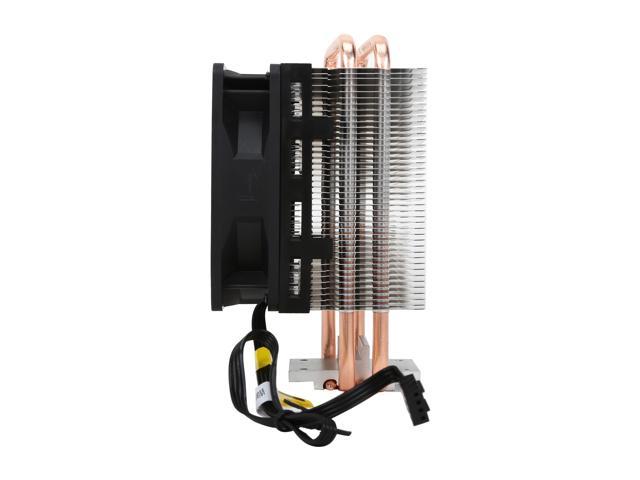 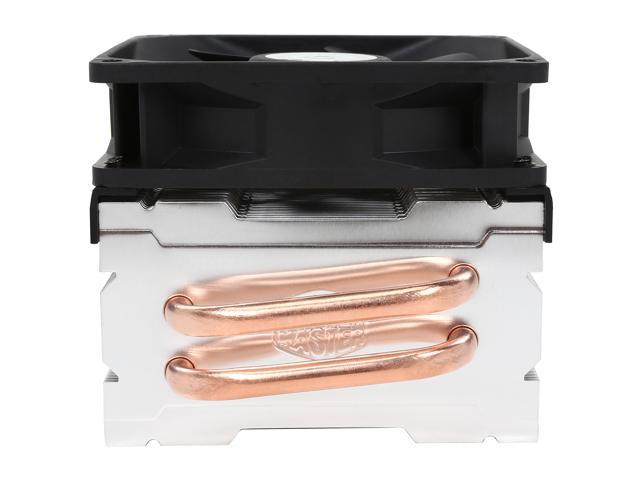 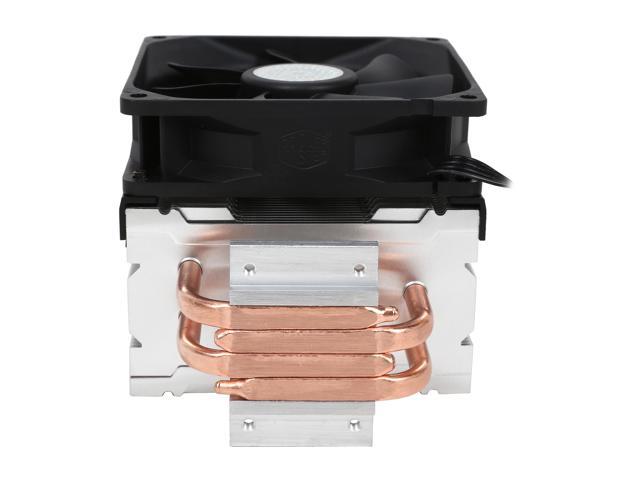 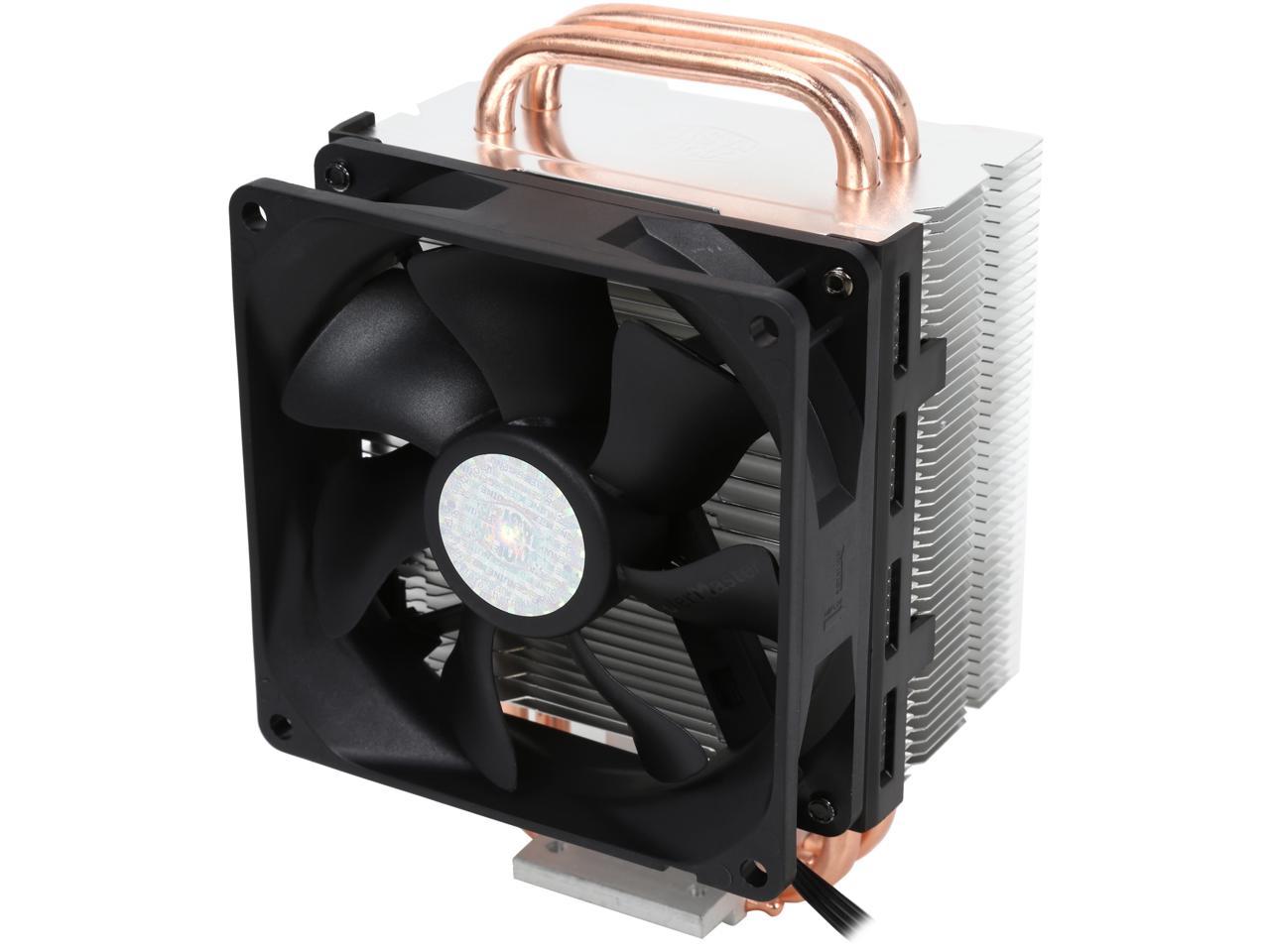 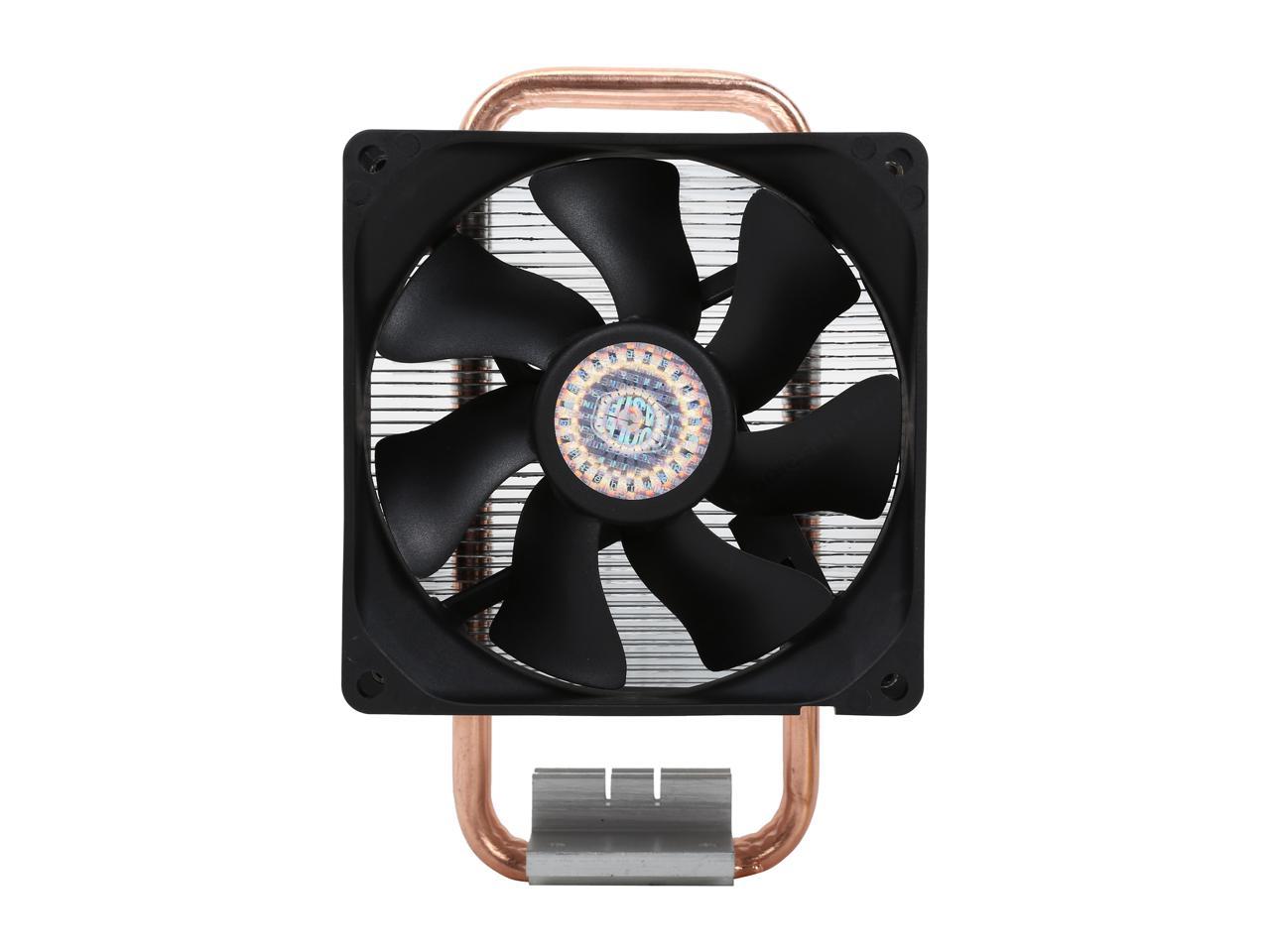 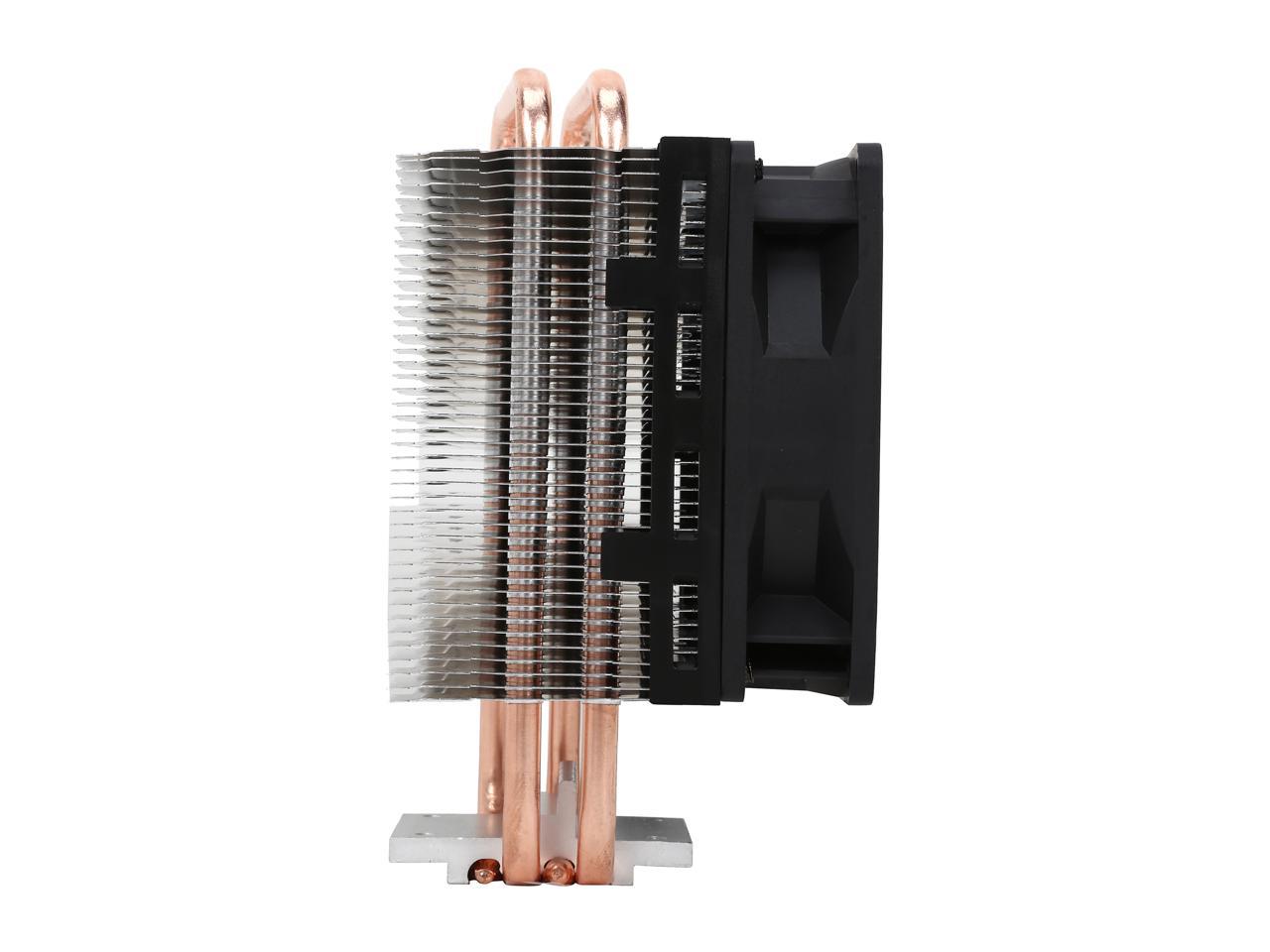 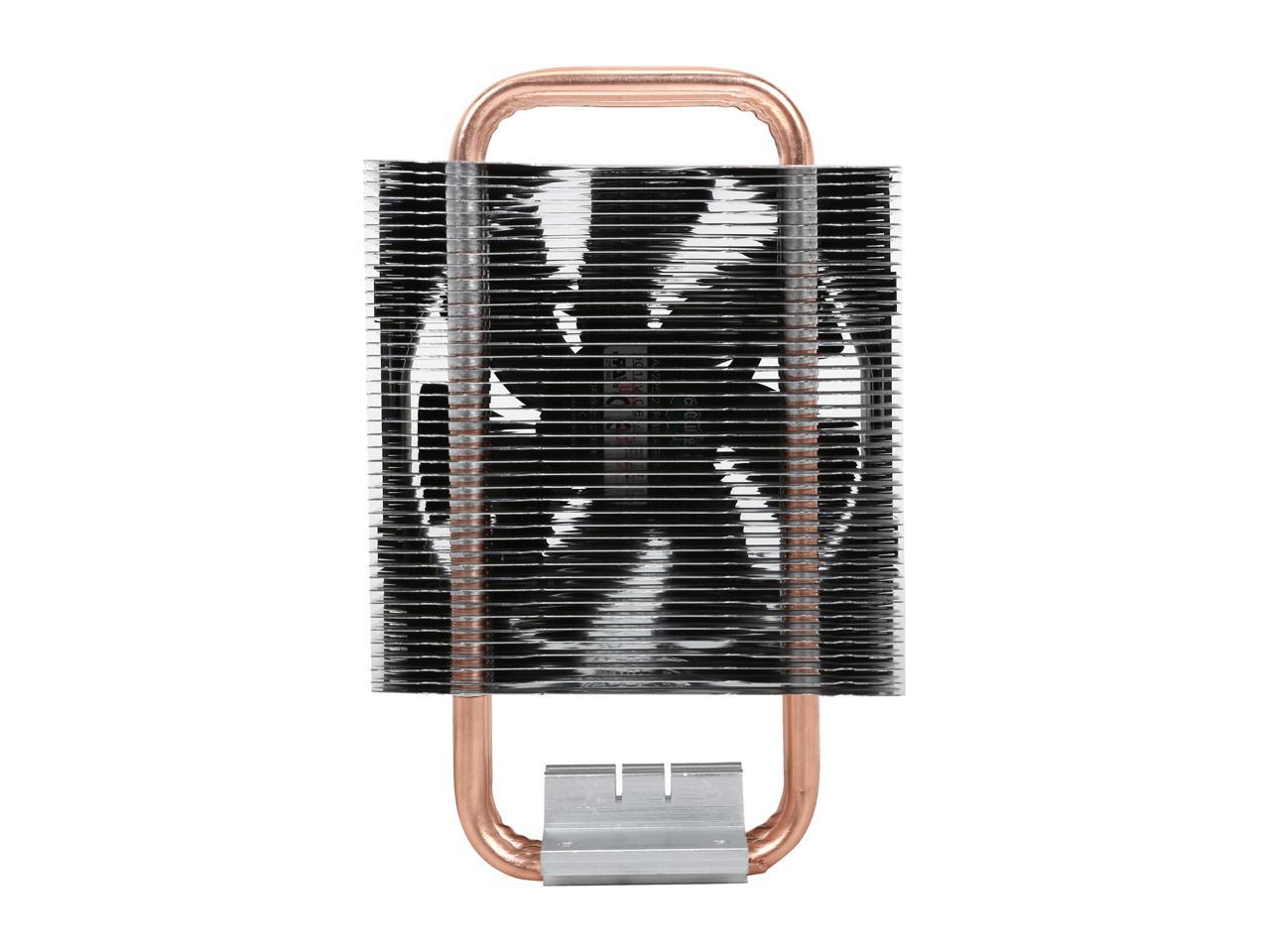 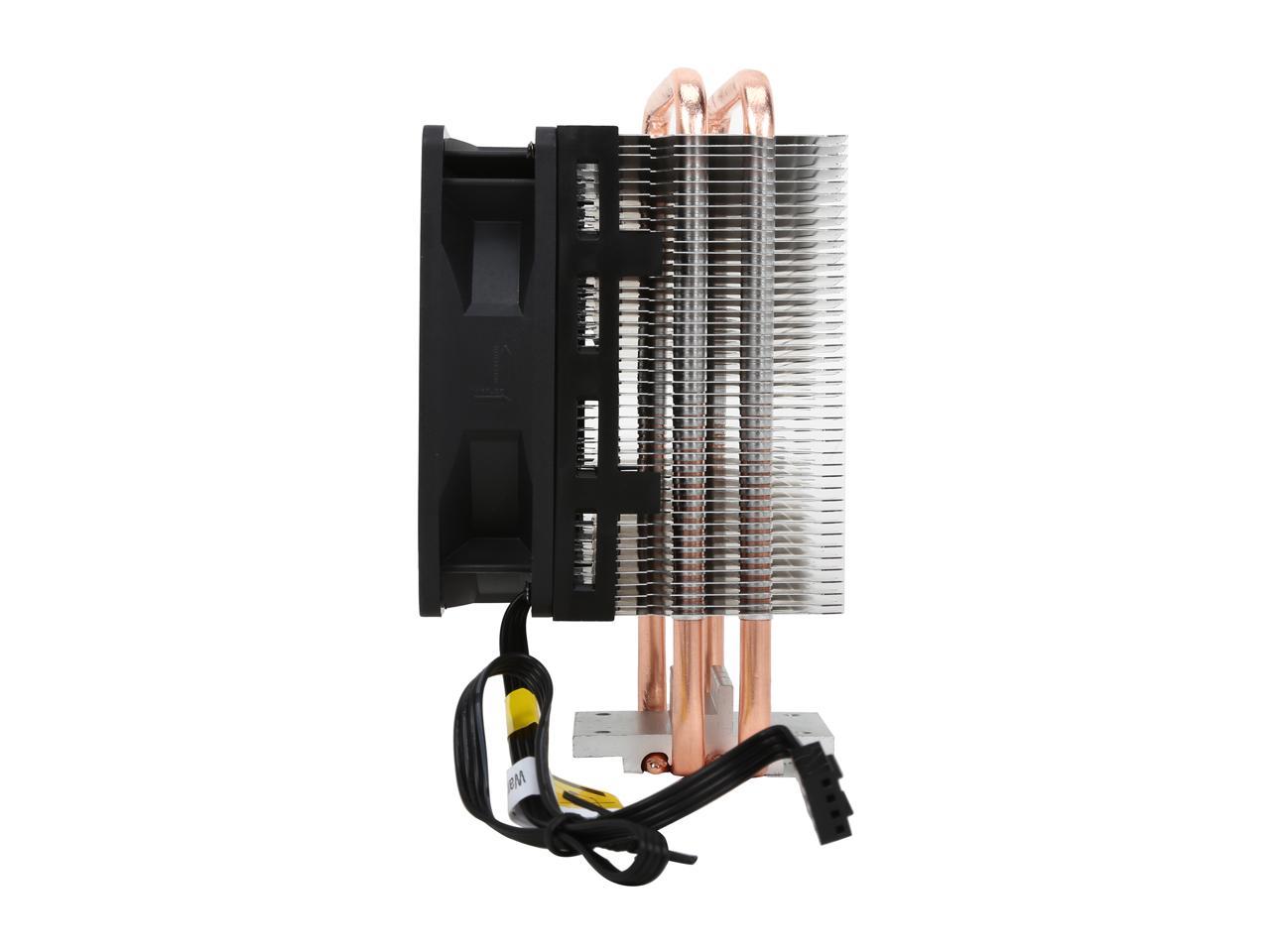 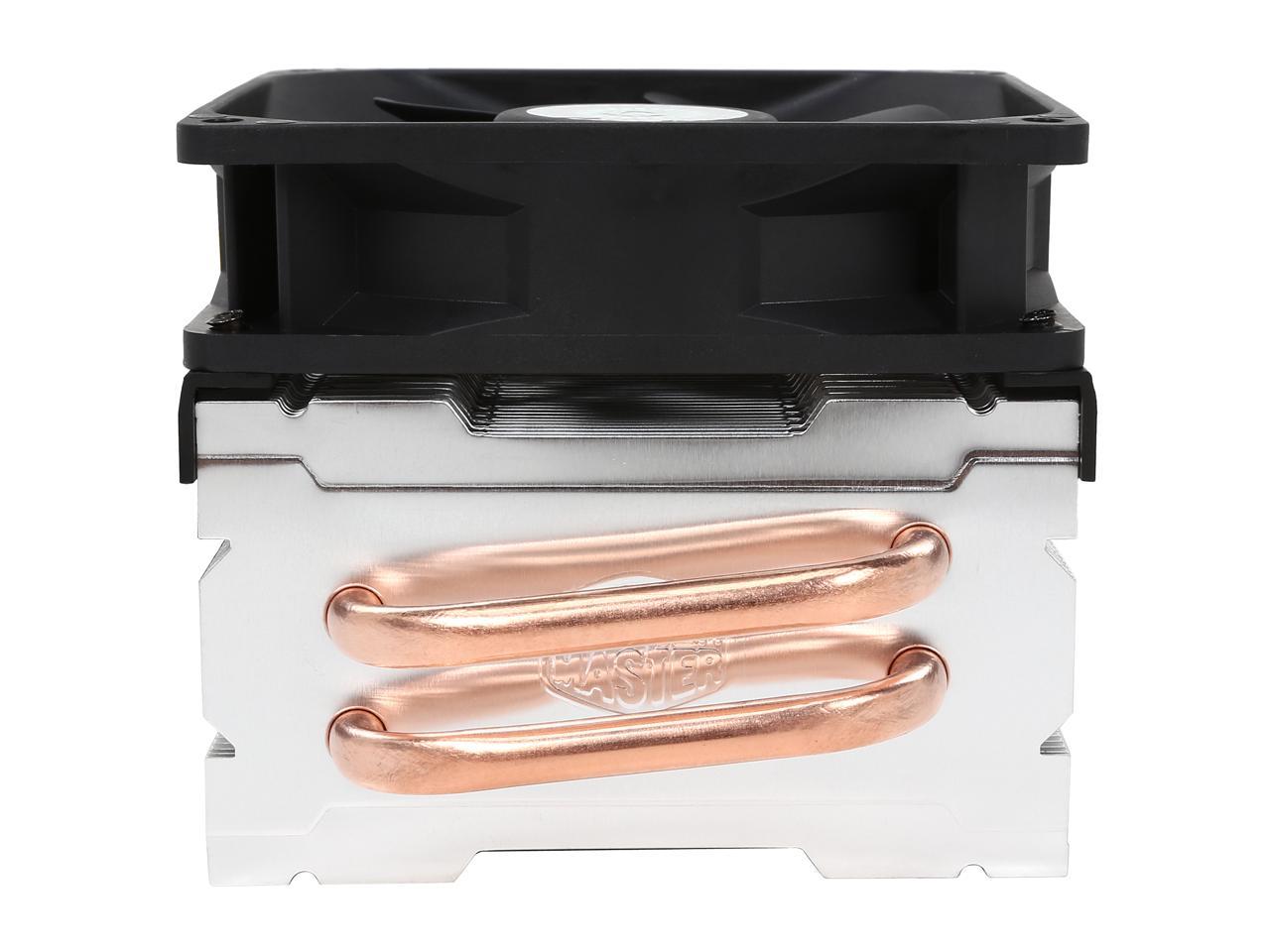 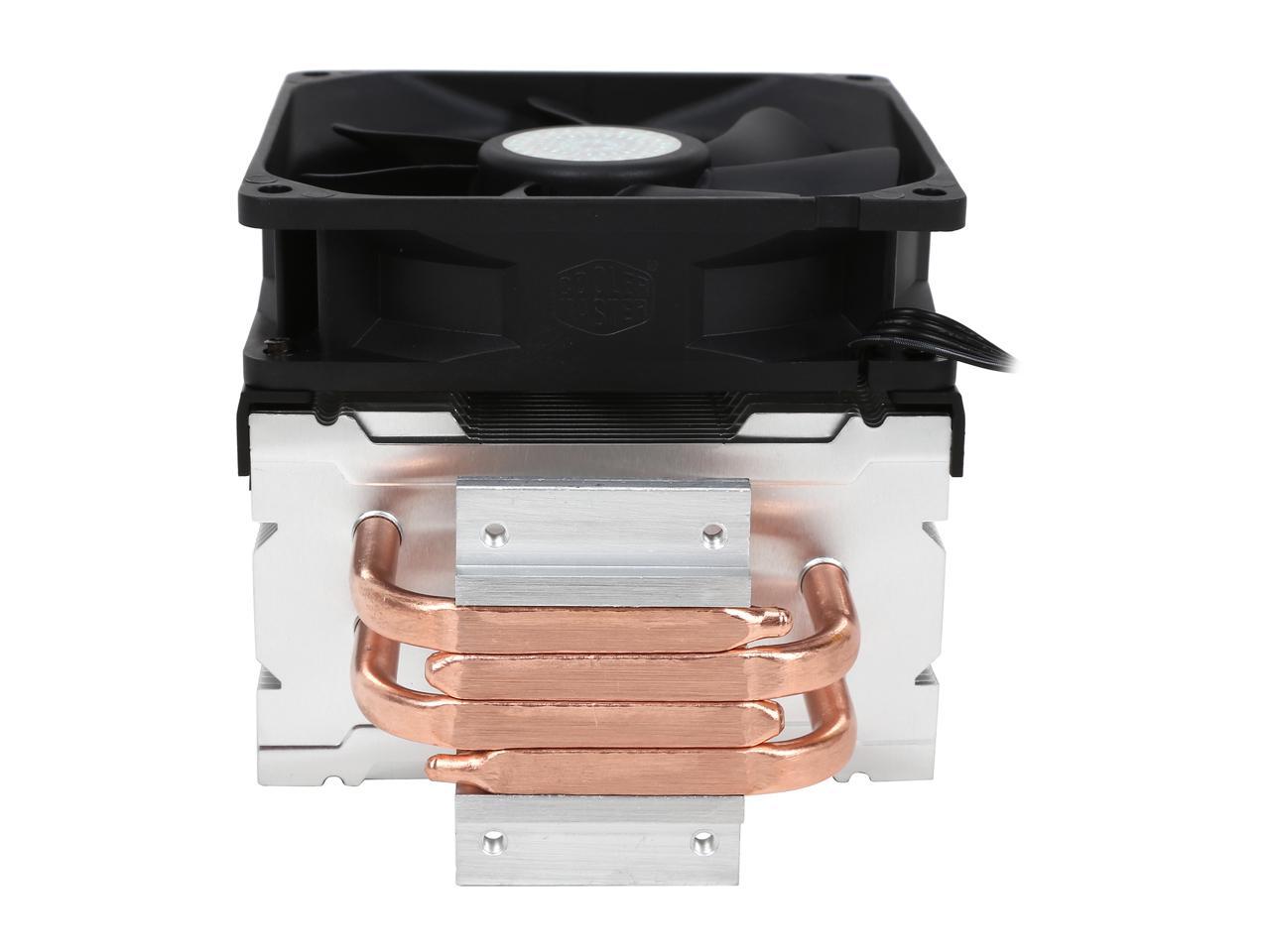 Pros: As far as low cost CPU heat sinks go, this is the best bang for your buck for under $20. It has direct contact heat pipes, which has been around for a few years now and makes a significant difference from older coolers that don't utilize direct contact. I was concerned about how well it would work when the quad heat pipe model was only $6 more, but when I got it out of the box I realized the design of it allows the cooler to utilize the two heat pipes very effectively. Both heat pipes make contact twice. The pipes make contact with your CPU, then go up through the fins, loop around and make contact again. I was impressed with that design. I imagine it is nearly as efficient as the quad heat pipe design. I was also concerned that this cooler would be too tall to fit in my very confined case, but it fit with room to spare. It may not fit in some small form factor cases, but for the vast majority of mini towers and larger, I would imagine it's small enough to fit. It has a single 92mm fan. Which is very quiet. It was barely audible even from only inches away with my case open. Even at full speed it's not that loud. It makes a mild whirring sound. Very reasonable in terms of volume. The performance of this cooler is good, not great. If you want great then you'll have to spend more. But for what you pay, it is an excellent cooler. I used this cooler for an old Anthlon dual core build I am making into an HTPC. Those CPUs are notorious for running hot. I tested this coolers performance for average to high CPU use and the CPU never exceeded 49C. I am using Prolimatech PK-3 as a thermal paste. That has a lot to do with the low temperature. Cooler Master paste performs satisfactory. But for excellent cooling capability, a high end thermal paste is the key. It's the difference between 49C and 59C in some cases. The CPU was at factory clock, no added voltage or overclocking. In my book, less than 50C is my target temperature. 60C is acceptable, but much more than that and I start to get uncomfortable. So with this cooler and a good thermal paste, I was able to keep my CPU cool for a very reasonable cost. The quality of this cooler is good. None of this fins were bent, they were all properly attached. The heat pipes weren't perfect, I discuss that in the cons, but it clearly didn't impact cooling capacity by much. The fan works well and moves air through the fins well. The installation couldn't have been any easier. One of the perks of using AMD CPUs. Installing coolers is always an easy task. Unlike with Intel sockets, which can be a pain. It is a good looking cooler. For any kind of normal PC, that's not super high end, it looks really good mounted to your mother board.

Cons: My only complaint about this cooler is the contact points where the copper heat pipes meet your CPU are very roughly finished. They should be shined and polished, but the contact surface was very rough and not perfectly flat. Clearly no work went into enhancing the contact point at all. But, it is possible to shine that surface yourself with the proper tools. Using my Dremmel, a polishing wheel and polish and some time, I was able to bring that surface to a nice shine. Not mirror finish, but far better than factory condition. There are gaps between the heat pipes at the contact surface of the CPU. I pulled this heat sink off after assembly a couple times and noticed that the thermal paste tends to build up between the heat pipes in those gaps. You should keep that in mind when installing this cooler. You may want to add a little more than normal thermal paste to compensate for the paste that will build up in those gaps. I also noted that where the heat pipes were bent the copper kind of bunched up at the elbow in some spots. I can imagine that might possibly impede flow inside the heat pipes. Reducing their effectiveness. But without being able to see inside the pipes, I can't say for sure.

Overall Review: For what I paid, I am very happy with this coolers performance. But, the heat pipes were far from perfect. Which is why I deducted one Egg. I wouldn't hesitate to buy this cooler again for another project. As long as I wasn't doing any overclocking. I don't recommend this cooler for any kind of heavy overclocking. For mild overclocking on most CPUs, it should be alright. But there are CPUs that run very hot normally and adding too much voltage with any CPU can easily extend the heat of a CPU well beyond this coolers capability to cool. Do some research on your CPU before you decide on a heat sink for it. I also have a Cooler Master Hyper 212 Evo on my i5 2500k and my friend has a Hyper 212 on i7 960 and they work remarkably well for cooling overclocked CPUs. Even with only a single fan. If you want to get into high overclocks, then this isn't the cooler for you. But Cooler Master does have coolers on offer that are suitable for overclocking. I imagine it's possible to add another fan to this cooler, creating a push-pull setup. Enhancing this coolers capability further. But I didn't see the need for it in my case.

Pros: I just started getting into building entry level gaming computers as I have always dealt with office computers. Seeing as the stock heatsink wasnt cutting it for my AMD 8 core processor I was looking for the best entry level cooler without spending a lot. So far this is the BEST. Its keeping my temps within a few deg C of the MB temps.

Cons: I dont really see it as too much of a con as I am a machinest for my profession. The heatsink like others have said doesnt have the best finish where it sits on the CPU. All I did was take some 200 grit sand paper and set it on my surface plate (or for the common person, any fairly flat surface), rubbed the heatsink back and forth a few times to sand it nice and smooth. Then I took scotch brite and did the same thing. That buffed out to under a 62 finish (again work talk, but it means a fairly good finish). To me it cost nothing and was able to do this in under 2 mins. But to anyone else still shouldnt cost much as sand paper isnt expensive anyways and probably have some laying around. The scotch brite isnt necessary if you dont have that laying around. Nothing I am going to take an egg off for as to me it wasnt an issue. Can see it being an issue for others though.

Pros: It does the job for my AMD AM4 Ryzen.

Cons: When installing you really have to make sure it lined up correctly. Very easy to slide around on top of the processor.

Cons: It's not the benevolent spiritual master of all time, space, and dimension.

Overall Review: Look. It's a cooler. For it's price, design, and intention, an excellent one at that. Keeps my Ryzen 1800X at around 34 at idle and have yet to get beyond 72 under heavy load. So it does it's job. And it fits the factory AM4 fan mount. So I'm happy. Until some of the other manufacturers and designs can catch up with discreet AM4 brackets. I'm just fine with this little workhorse. Buy it for what it is and you will be happy. Buy it for what you think it SHOULD be, and you will be disappointed.

Pros: So far, my Ryzen 5 2600 idles at around 35 degrees using this, and even under load barely hits 60, I can't even hear it over my Server PC which is on the opposite side of my room

Cons: the bracket for AM4 is incredibly frustrating to try and latch on without some practice, so I probably fiddled with it for 10+ minutes before I even bothered to put the thermal paste on, just so I could figure out how to make it stay where I wanted

Cons: For the price ? none.

Overall Review: Great product to use for AM4 while the vendors send out brackets.

Overall Review: The AMD stock cooler for my AM4 Ryzen 2400G mounts via screws onto the motherboard directly without any brackets. For a few minutes I thought this cooler had been mislabeled as AM4 compatible by Newegg until I looked in my motherboard box and found the brackets needed to attach this cooler to the motherboard. It attaches more like an AM3 or FM2.

Pros: Runs my 8700 under 50 degrees Celsius under full load. Easy to install on my Z390 Comes with thermal paste. Edit: This thing is awesome. Keeps my 9900k under 60 degrees full load