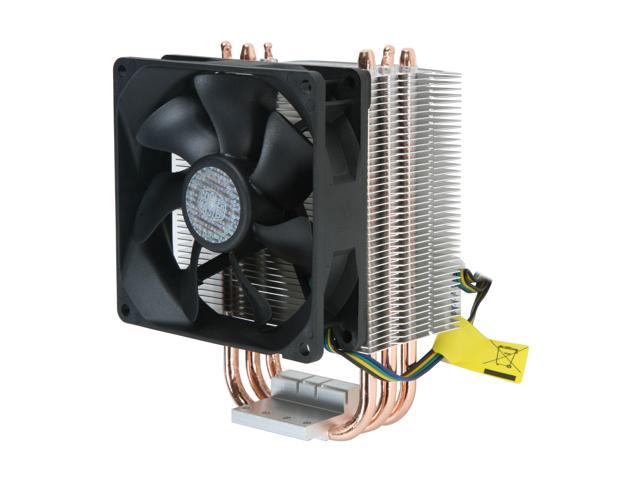 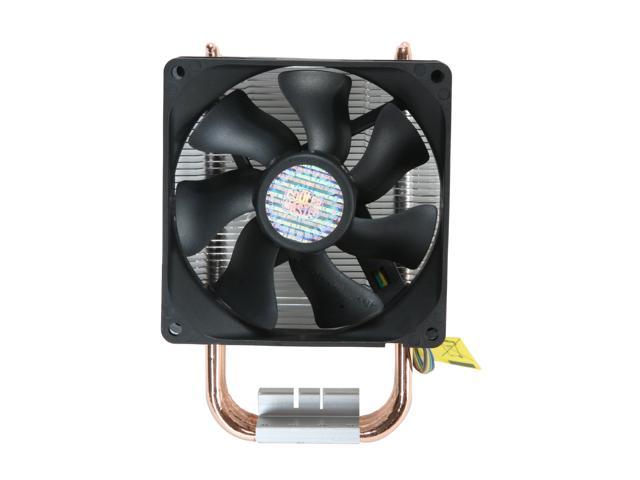 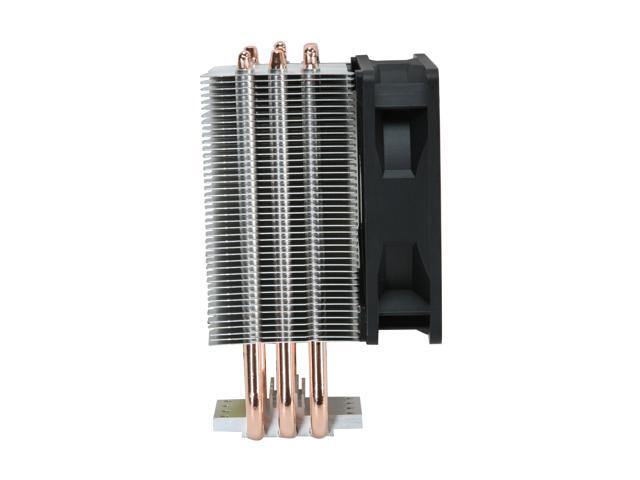 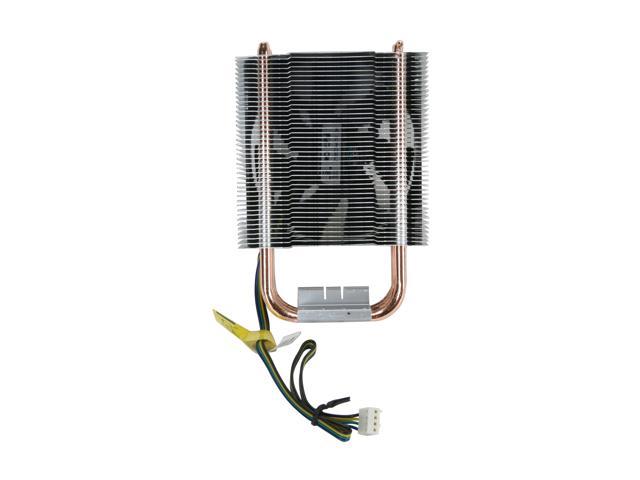 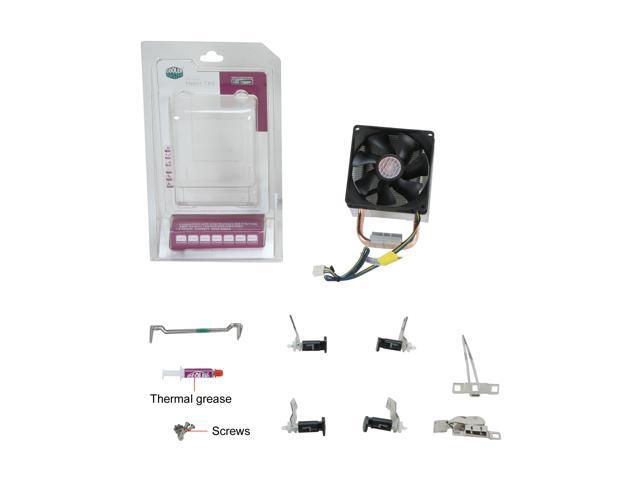 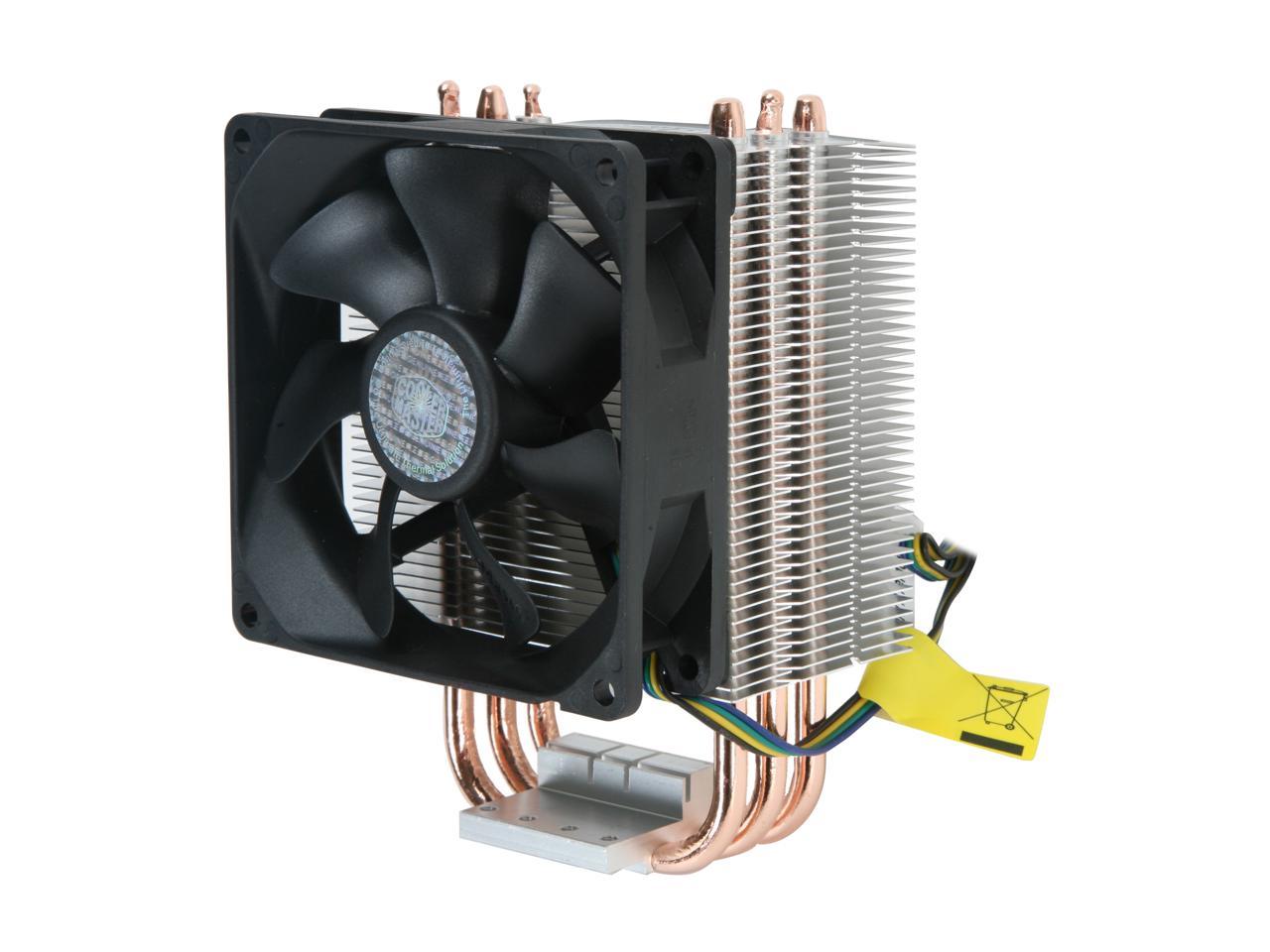 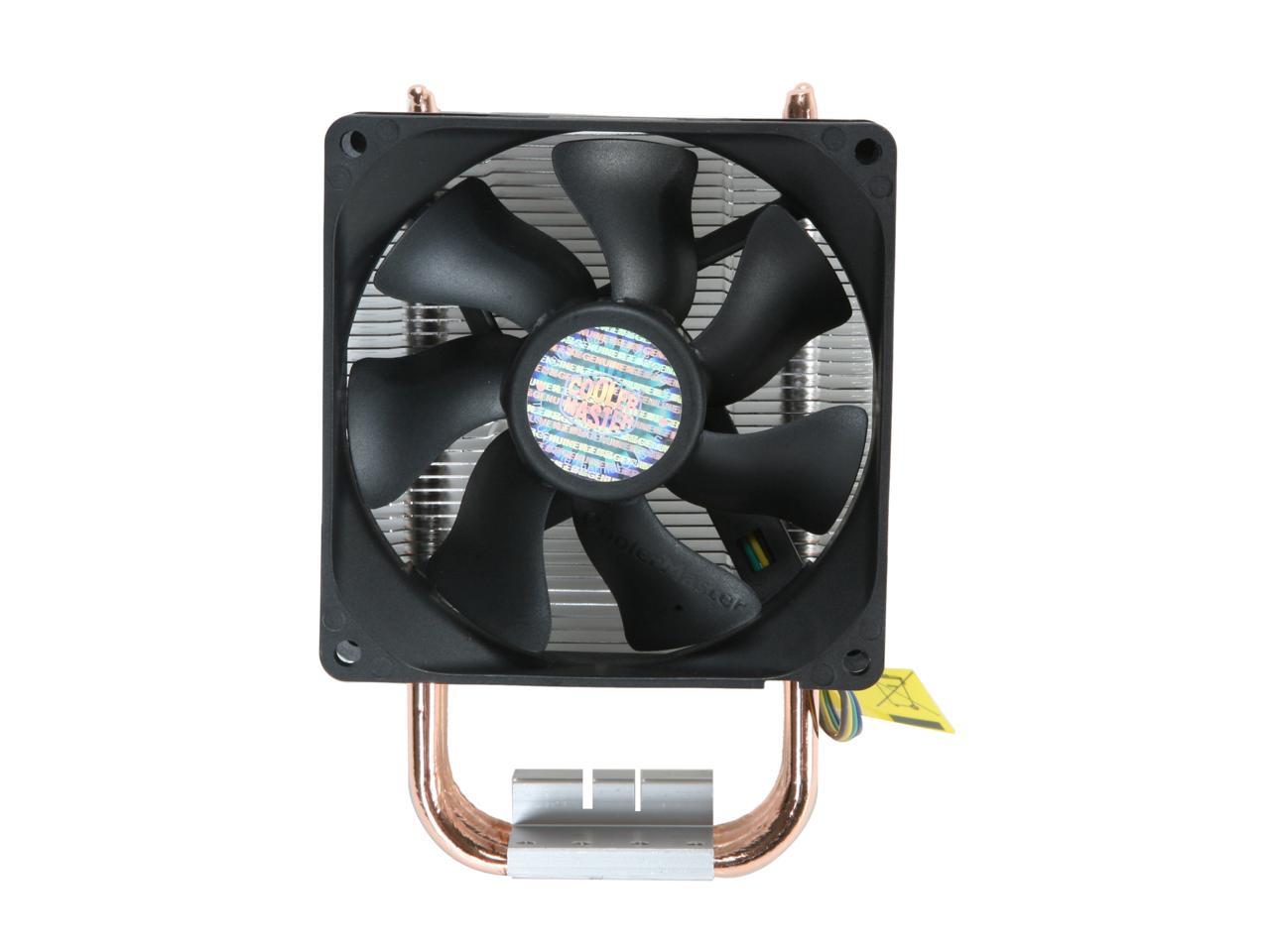 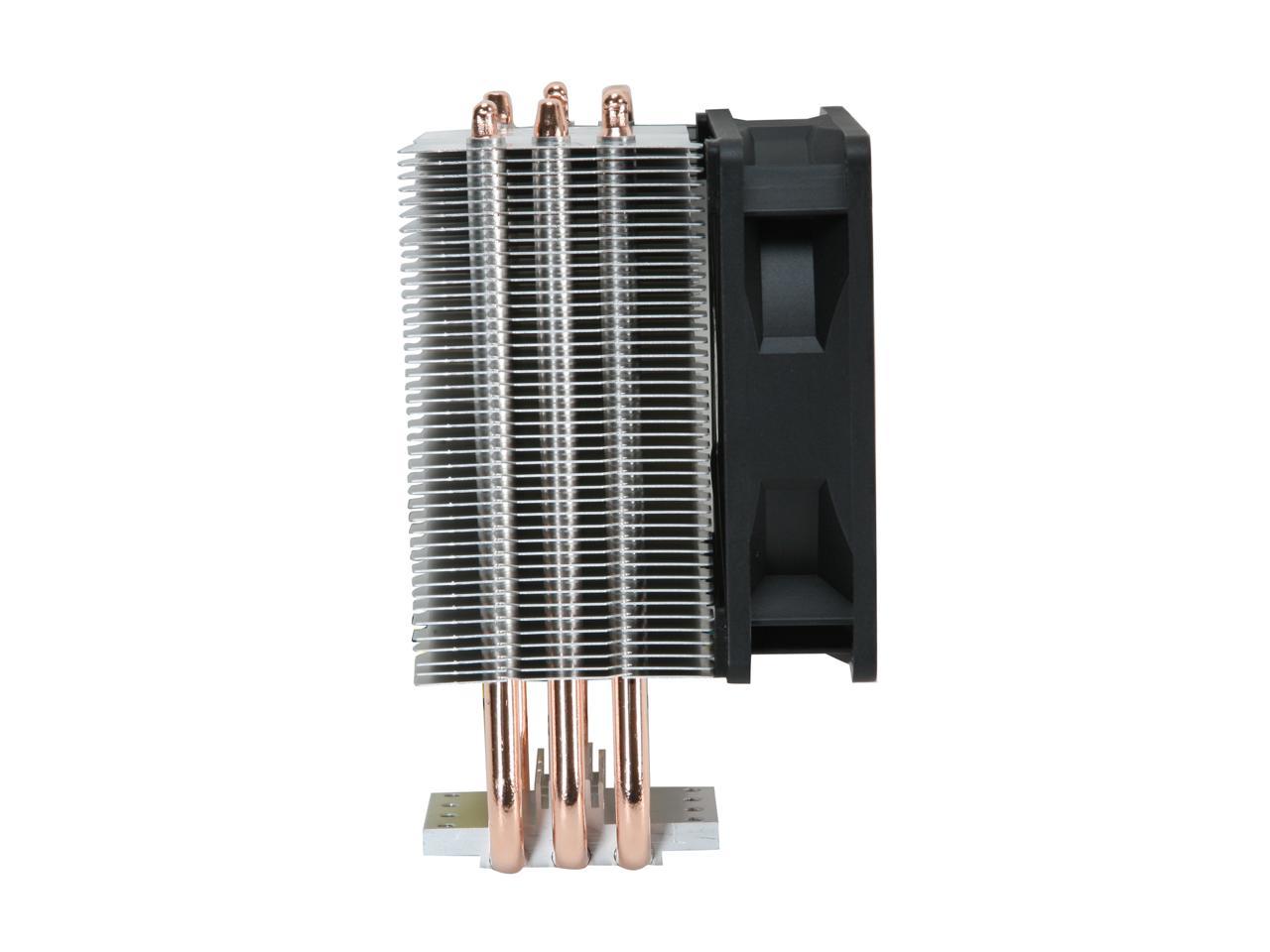 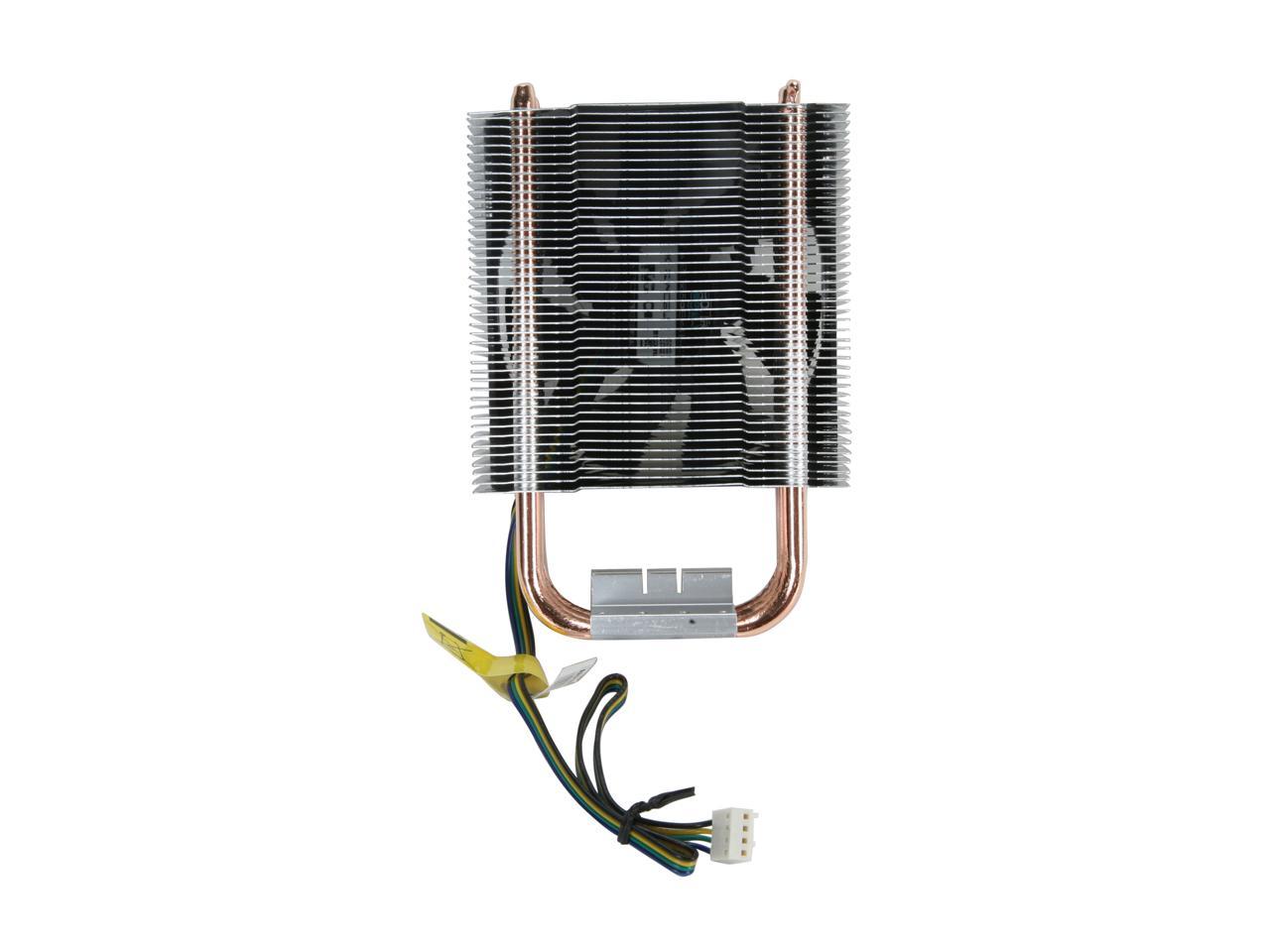 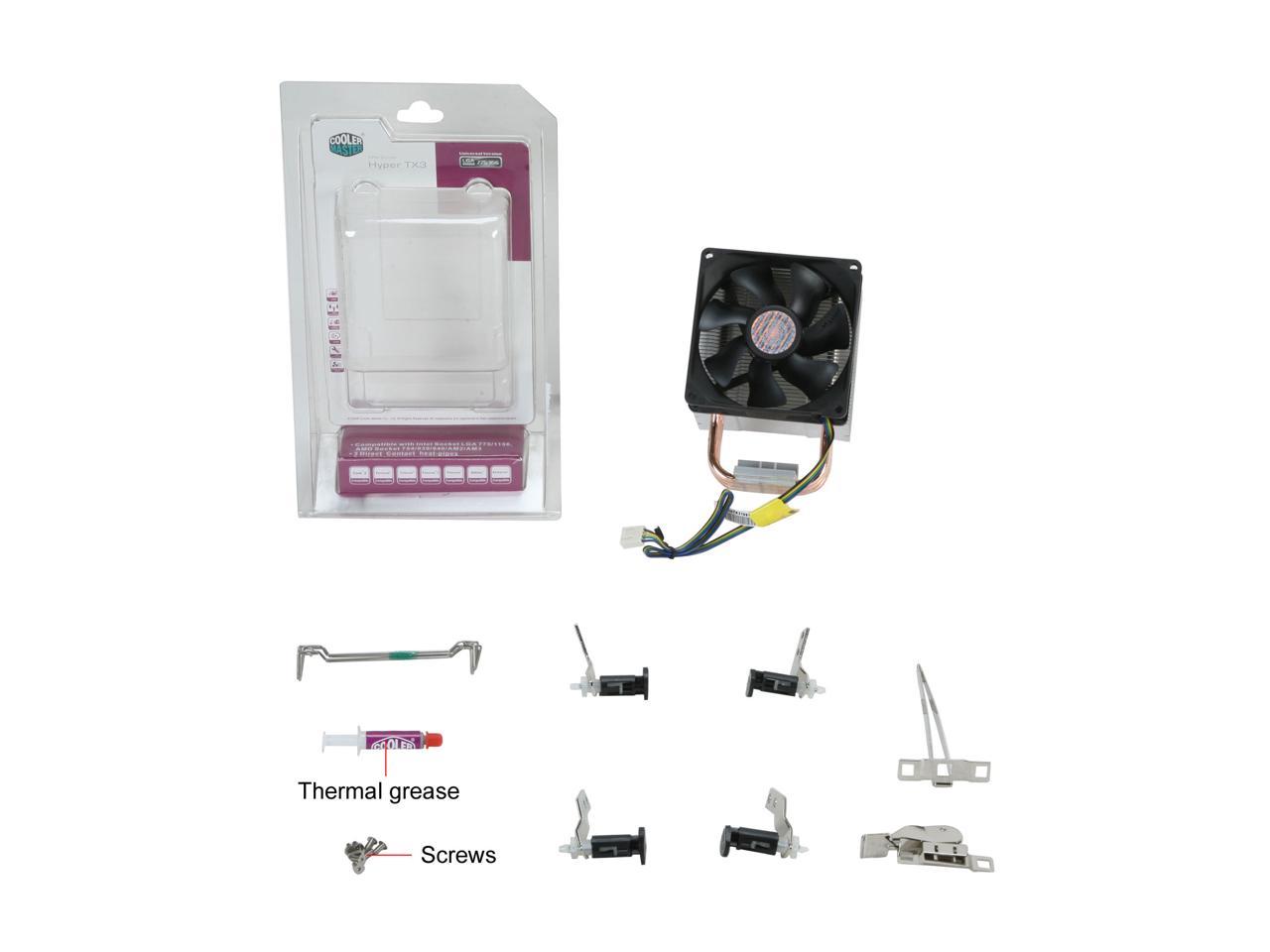 Cons: The 939/AM2 adapter isn't my favorite, but over the years, I have gotten better at holding it all together while pressing the lever down

Overall Review: I have been using some variant of this cooler for years. It wouldn't be my first choice for a performance build, but for narrower cases, it does the job. I have this one in my daughter's computer with an AM2 Athlon X2 overclocked from 2.8 to 3.5GHz and it cools well enough. I really like the fact that, down the road, I can replace the fan with a standard sized fan offering lots of options.

Pros: Lots of install options. The packaging didnt even advertise AM2. The installation was easy and it included everything. This thing fit tight with the AM2 brackets. NO need to remove motherboard is a HUGE bonus. Dropped my temps easilly 10+ degrees at idle and under light load never went over 51degrees. Fit perfectly in my mid ATX case. Price!! 20bucks free shipping.! WOW

Cons: Directions are not very clear on the fan flow direction. Its kinda difficult to tell which way the air is blowing. It didnt make my AMD X2 6000 have equal core temps. Been fighting that since the day I bought it. Fan does cover memory slots 1 and 2.

Overall Review: Installed on BFG 590SLI AM2 board AMD X2 6000 I also own the Hyper212, installed on my own pc. Im not knocking the hyper 212 but I just think it is too big. The Hyper 212 mounting system kinda stunk and wiggled alot. This cooler I think would have been a better option for my personal i7 build. Just my 2cents.

Overall Review: I was happy with the performance, but I expected a better fan from cooler master. I've had generic off-brands that lasted longer than 2 years.

Manufacturer Response:
Hello Edwin P, We apologize for the trouble you are experiencing with the Hyper TX3. The Hyper TX3 does have a 2 year warrany so please contact us for a replacement fan. Phone: 888-624-5099 Respectfully, Patrick CMUSA Support

Pros: This was the first after market CPU cooler I have ever purchased and I was pleasantly surprised. Idle temp is at 30 C and load temp hasn't gone over 43 C (room is around 21 C). Also was very happy to see instead of the cheap looking metal paper clips in the description to hold the fan on there are plastic attachments similar to the Hyper 212.

Cons: Installation I suppose-it was easier than other stock coolers I have installed but they are all really a pain the rump to install.

Pros: Does a good job cooling. Fit in my Mid tower box. FX-8350 with a decent load. No issues so far. Held in place solidly by one big metal clip. Little feet to help stabilize it. Comes with silver thermal stuff.

Cons: Tight fit. I don't leave my computer case open any more, just in case it would somehow tip over into something other than a flat surface. Mobo is an ASUS M5A99FX it was a fairly tight fit.

Pros: A solid heatsink in my book. Running it on my Asus P8Z77-v Pro board with Intel's I7-3770K cpu and it does a great job. CPU runs at 30 to 32C idle - and never over 46C under heavy and continuous gaming load (yet). It has a really quite fan too - can't even hear it at cpu idle or low load. I bought this cooler because most of the ones with the larger 120mm fans would not fit cleanly on my motherboard without covering/obstructing the 1st bank of the memory slots. This one has the smaller 92mm fan and it barely fit - and the fan can be adjusted up a little for those of you with the tall memory sticks with big heatsink fins (like me). You can reverse the fan as well if you don't mind the hot cpu exhaust blowing back over your memory sticks (instead out the back of your case).

Cons: No cons really - but be careful with the push pins that mount it to the board. A little tricky if you don't have them lined up with the motherboard holes just right - and make sure the pins are not in the locked position during install else you might bend or even break the plastic pins.

Pros: Pros: -Super easy install for AMD chips, and as far as I can tell, it looks as though it'd snap in the same holes as some stock Intel sinks. -Quiet. It's not huge for me, as I've got way too many case fans because cooling is more important than noise to me, but it seems pretty efficient. -Can be mounted in any direction- albeit, it's a touch more difficult to get it to sit still when mounting it sideways. -Fairly aesthetic. It's definitely not an ugly sink, which may or may not matter to you. -Doesn't impede the DIMM slots even if mounted sideways. -Fairly light so it isn't going to put a lot of strain on the board if you keep your case upright. -Comes with mounting brackets for a secondary fan for "Push/pull" configurations. Useless if you've got a top mounted exhaust and you mount the cooler sideways, though. -Affordable. About $30 anywhere you go. While it may not be on the top line of air coolers, I'd say that if isn't efficient enough for your needs, air isn't going to cut it regardless. -Without altering fan profiles, it's allowing my OCed FX to idle at about 28c-30c with a max load temp of 45c-47c... with my case fans on their lowest setting.

Cons: Cons: -Mounting it sideways is a pain as it doesn't have full rails on the mounting surface to support the cooler properly during install. Do-able, but a little extra metal would've made it effortless. -Inefficient fin design. They're so far apart, and there's no air turbulence generated to help kick the heat away. -Doesn't tell you anything about the included thermal paste. Didn't use it, but I'd prefer to know what I was putting on my components if I wanted to. -Slides around a lot until the thermal paste sets. Checked it about 5 times, and ran it for the first few times on it's side to ensure that it didn't slide or apply asymmetrical pressure to the paste and result in poor contact or air pockets. -Doesn't appear to mount as accurately sideways. My cooler seems to have a bit more of an inclination towards one side of the processor than the other which might be an issue for some. -Grooves on the processor bed for the heat pipes are quite deep. I'd recommend using the spread method on the cooler itself, and then take all the excess off until the paste is flush with the bed, and then use the traditional method of mounting a sink for best results and coverage.

Overall Review: Whether this sink is for you depends on what your intention is. If you go into your build anticipating that you'll be overclocking quite a bit, then just do yourself a favor and get a water cooling system. $20 vs $100 seems like a large jump, but it's fully justified. You don't have to worry about ambient air temperatures and attributes affecting the thermal profile and temperature of your CPU. You will run at significantly lower temperatures which will result in greatly increase component life, or even translate into significant performance increases in overclocking. In my opinion, this cooler is a nice, cheap, entry level air cooler that'll do it's job as well as it needs to. Not the top of the line, but nowhere near the bottom. Good price per performance.

Pros: Cools my Phenom II X4 955 (not OC'd) quite well while being almost silent. My BIOS is set to keep the CPU around 45 degC with a minimum 50% duty cycle and I hear only a faint woosh of air when I listen for it with the side of my case open. Temperatures dropped about 7-10 degrees Celsius over the stock AMD cooler.

Cons: None really. Probably won't do as well as a bigger cooler, but fine for my needs.

Overall Review: Like I said above, I have my BIOS set up with a target temperature of 45 degC and a minimum PWM duty cycle of 50%. Look in the hardware monitor section of your BIOS setup for this. The retention mechanism for AM2/AM3 sockets looks a little odd at first, but is pretty easy. Remove the fan from the heatsink first, mount it, then put the fan back on. The lever on the retention mechanism should start at the left (when looking at the lever from the front), then move it to the right to clamp down the heatsink.