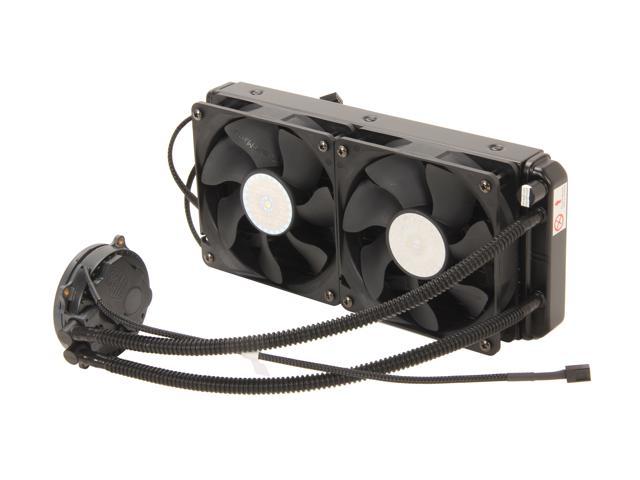 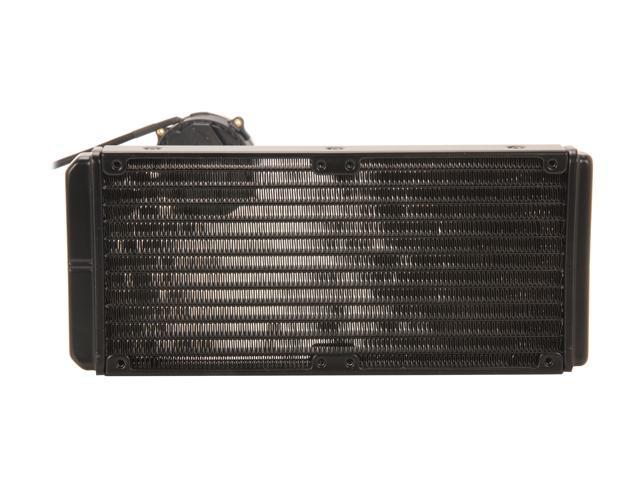 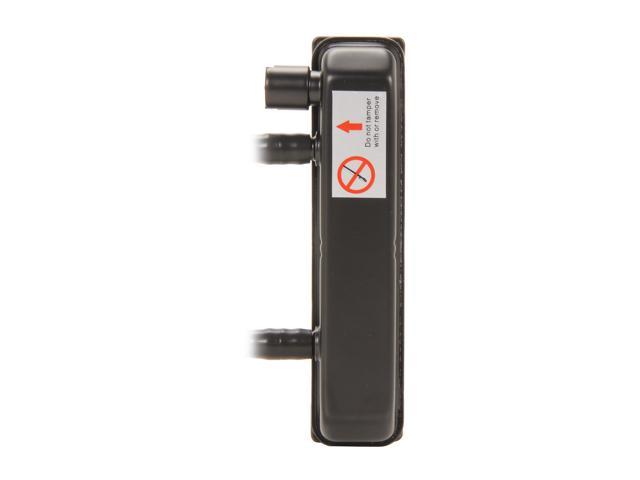 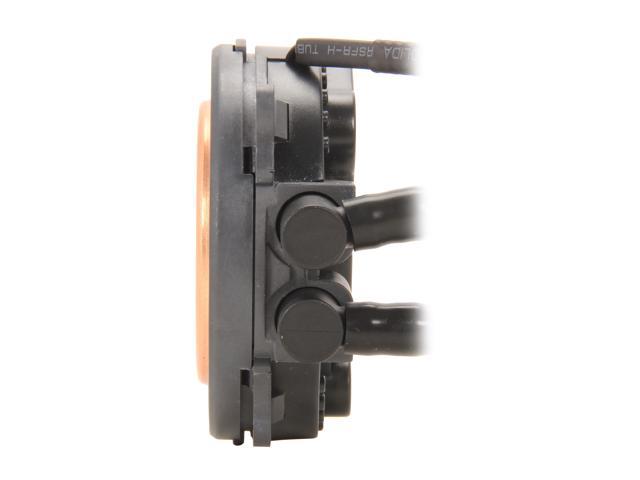 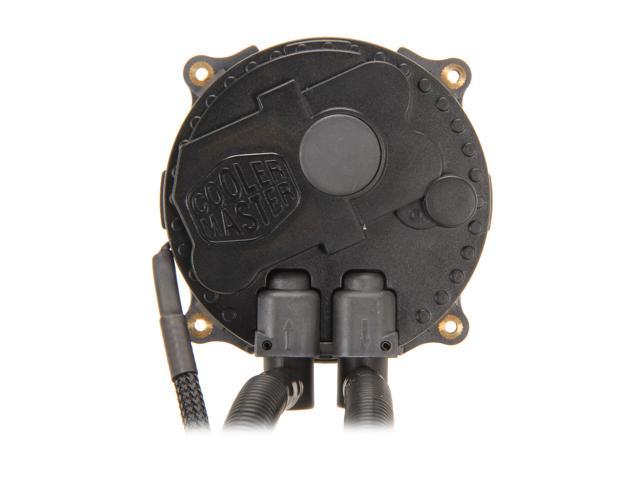 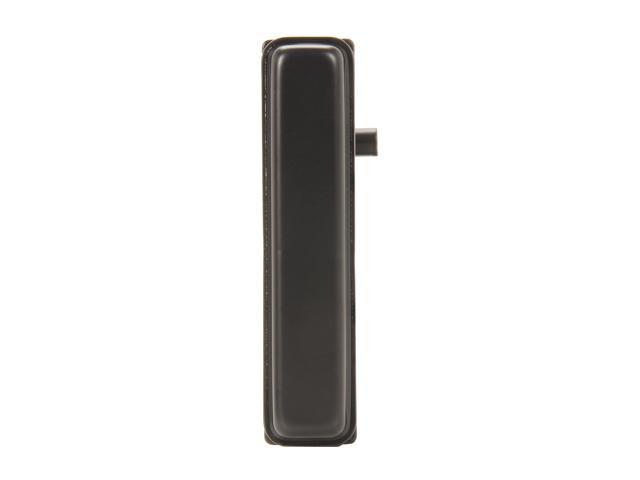 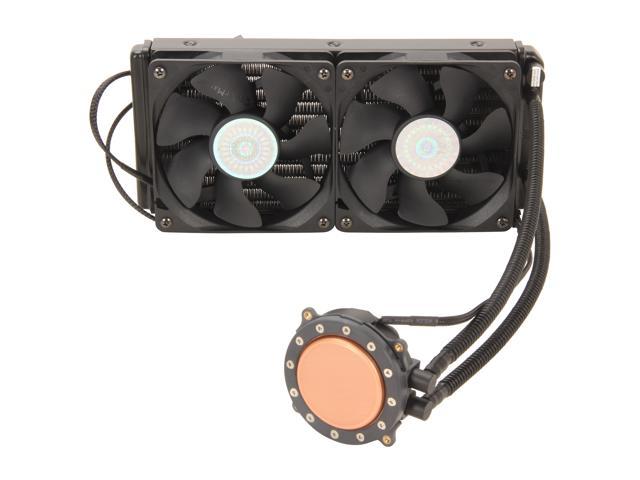 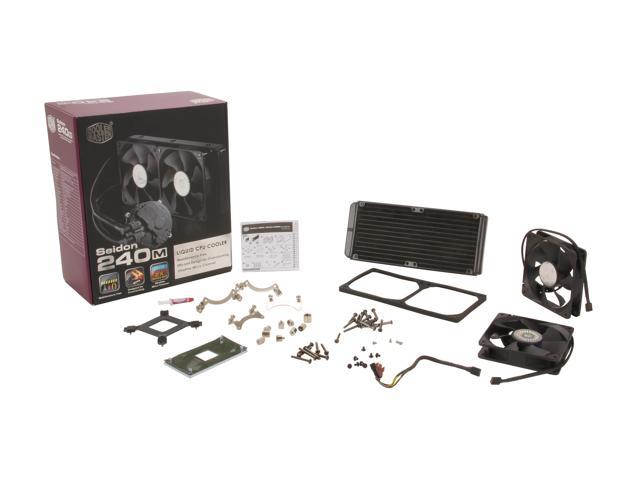 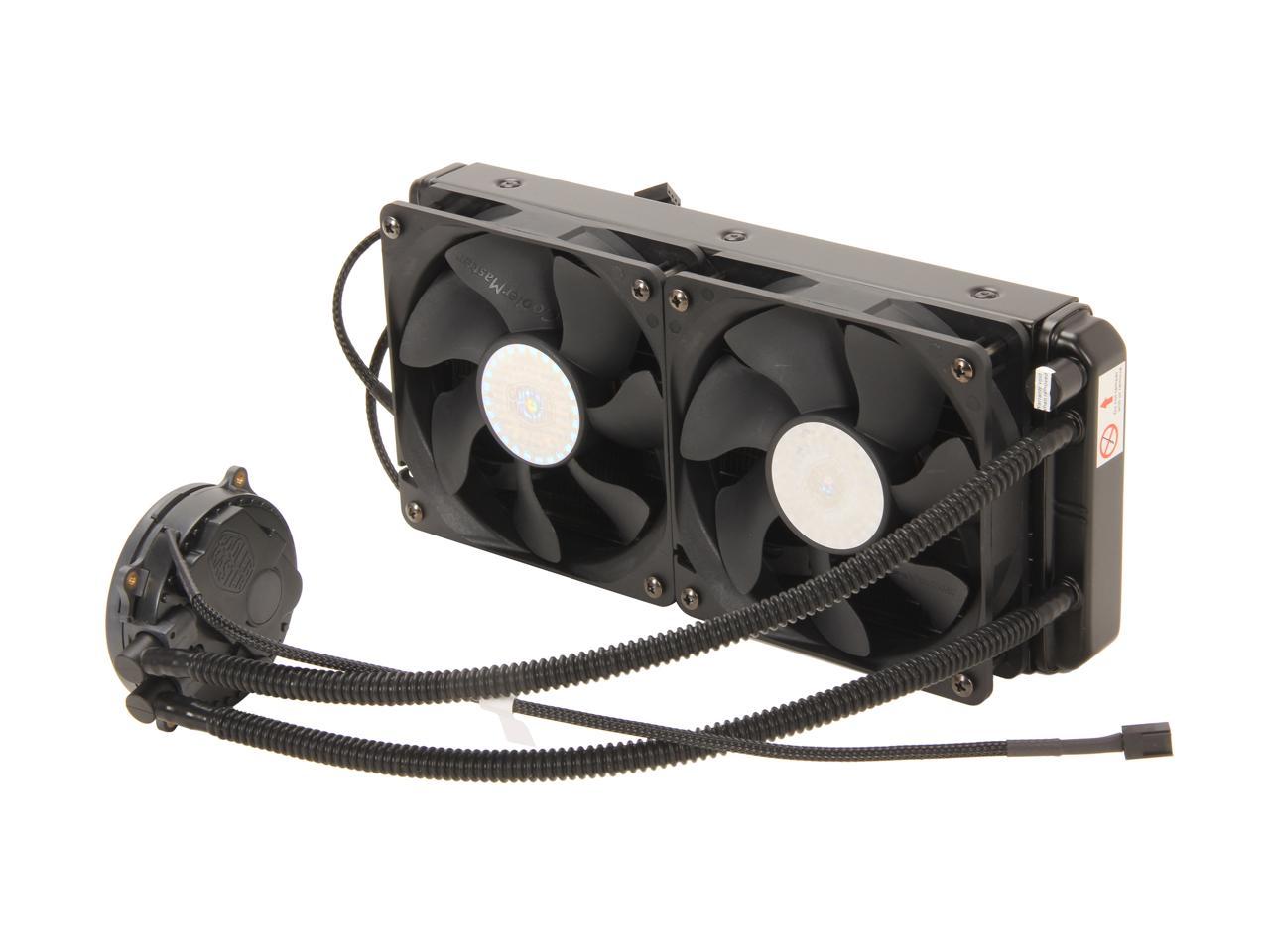 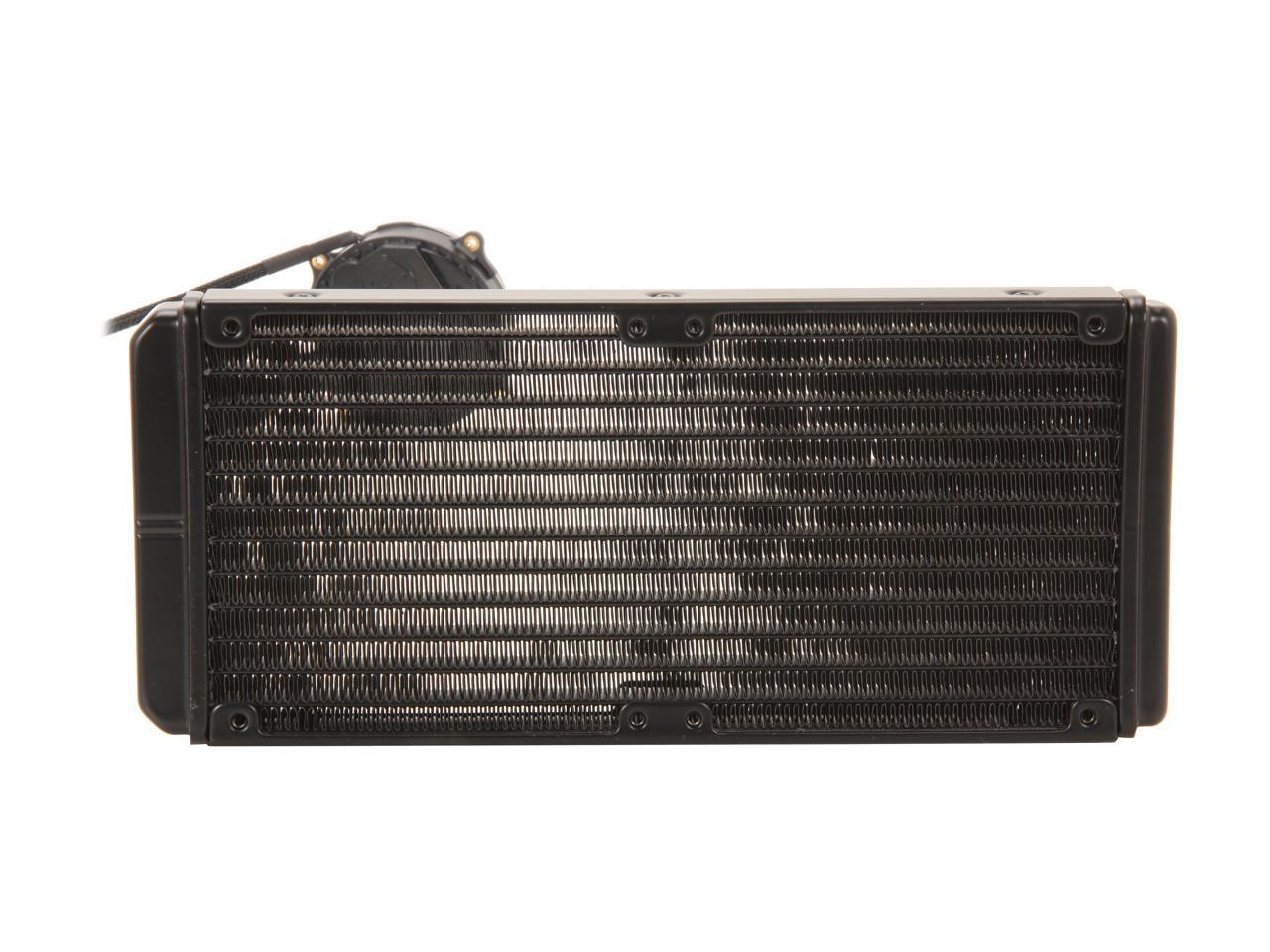 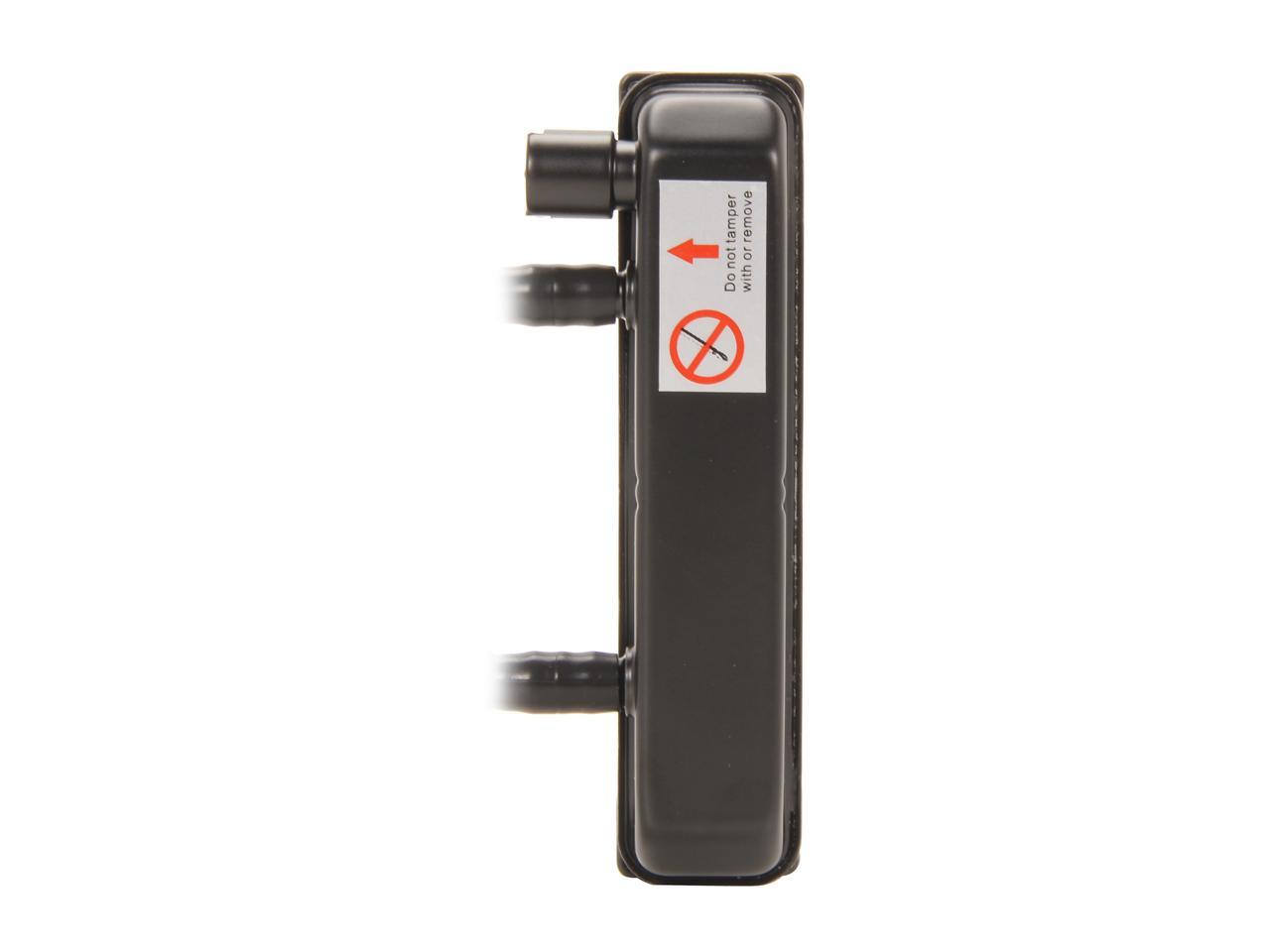 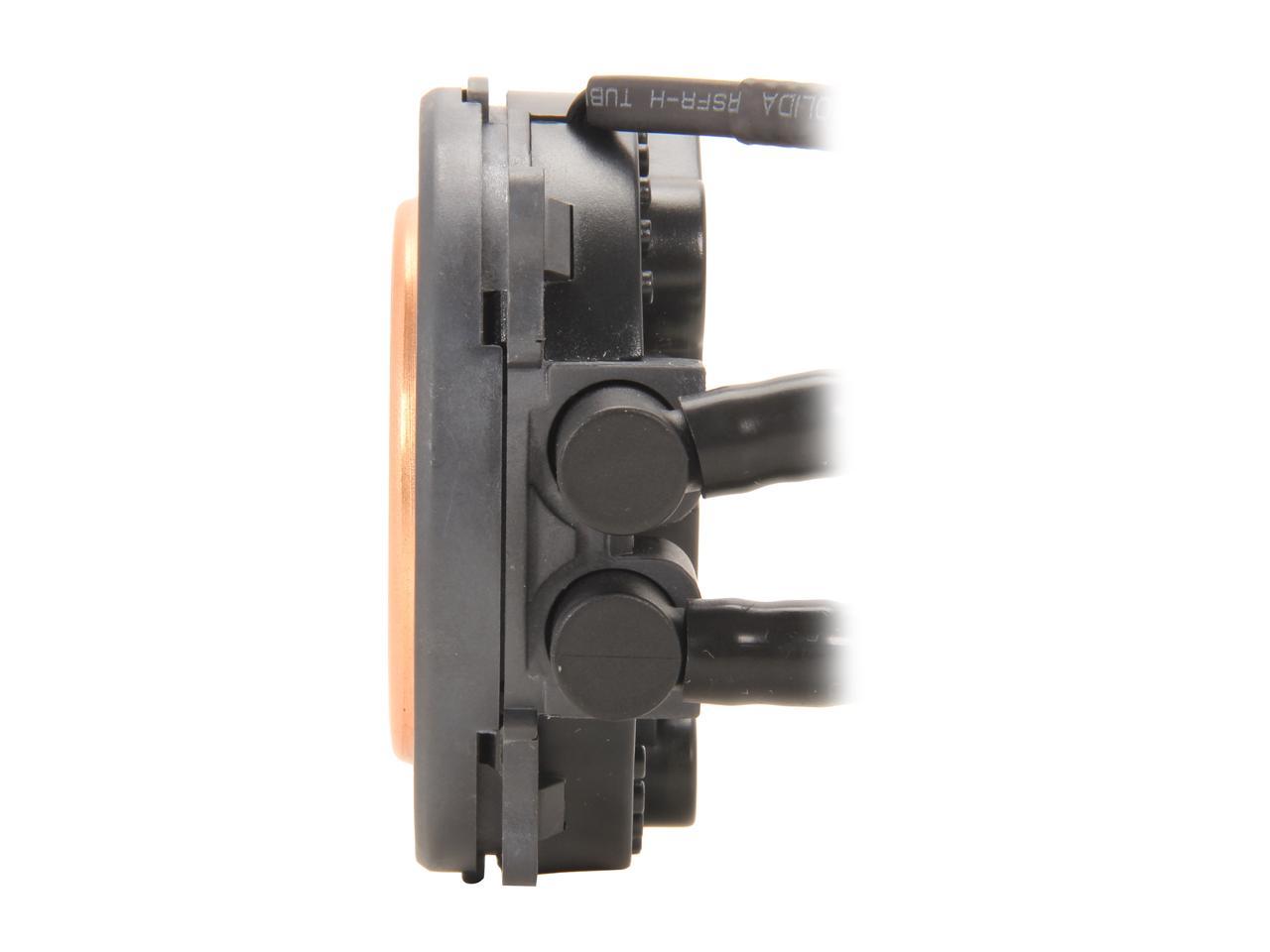 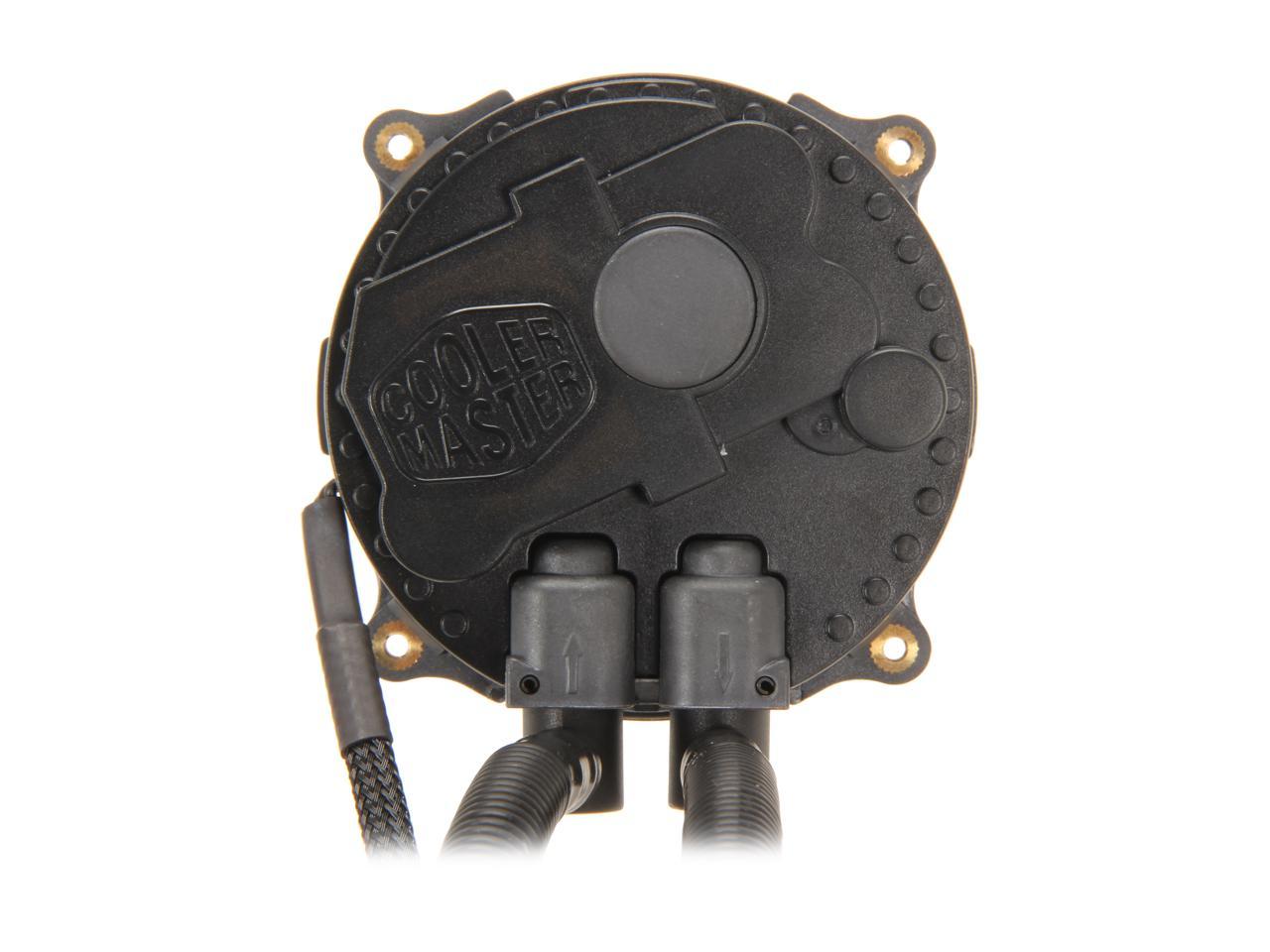 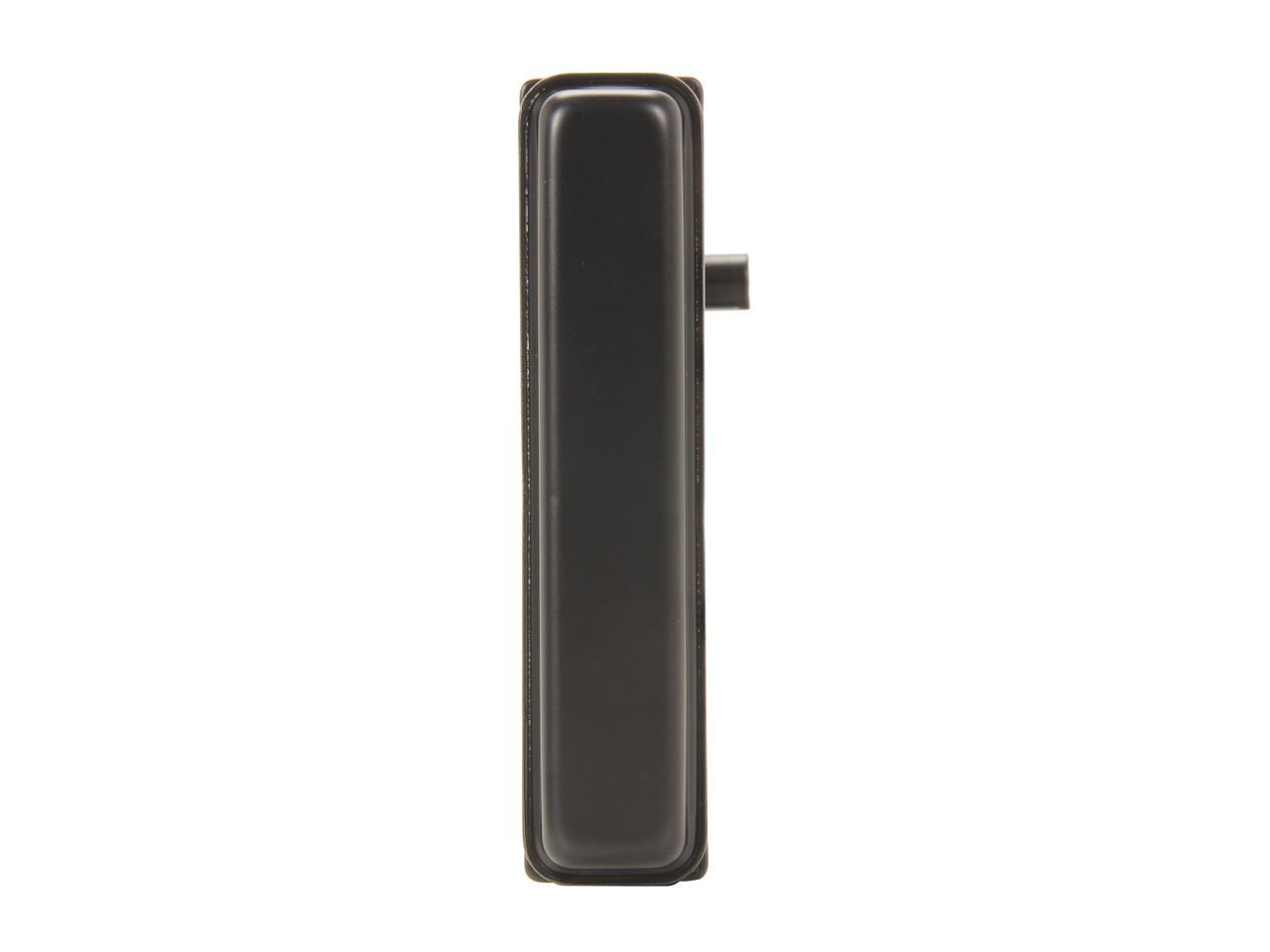 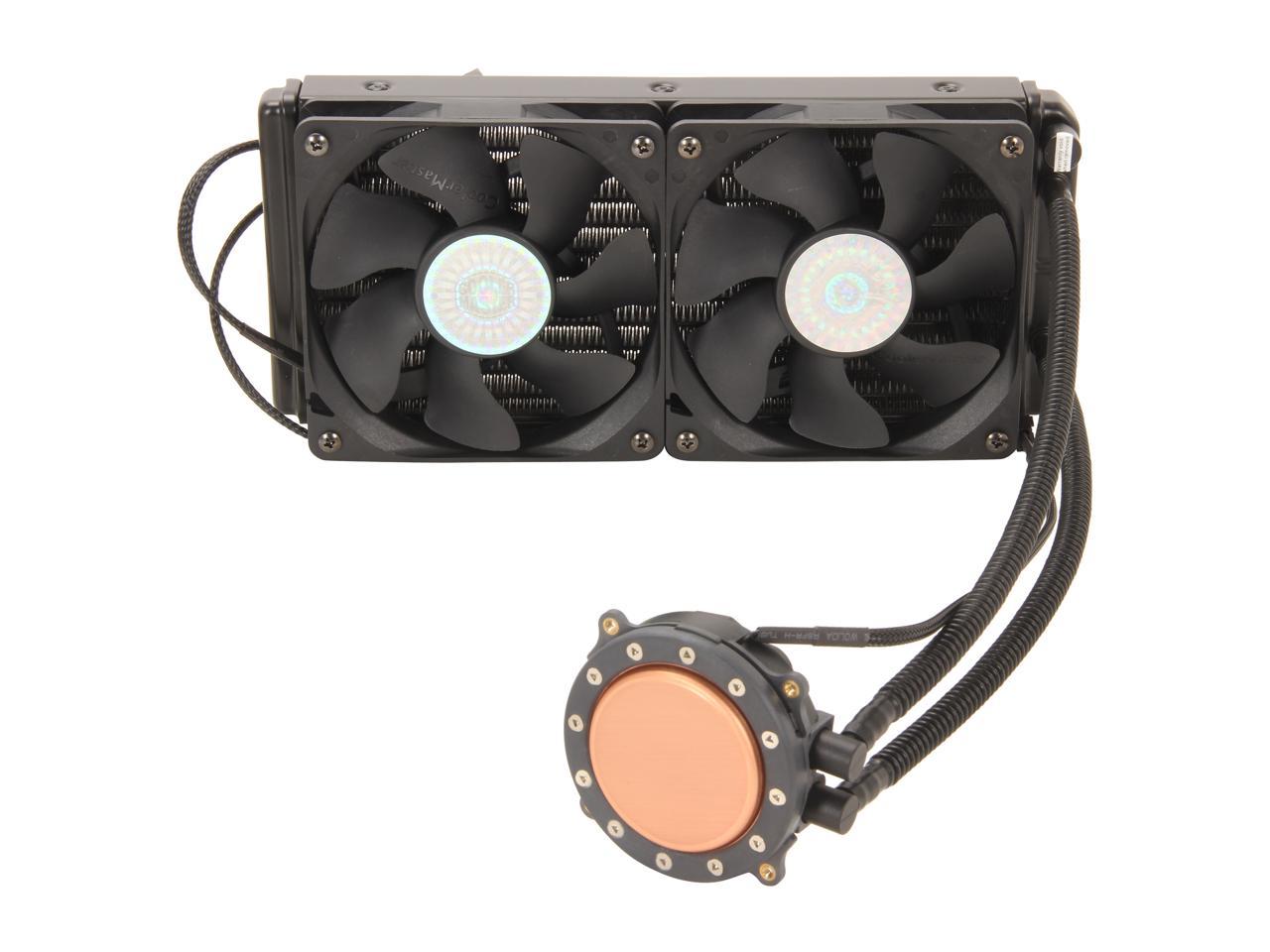 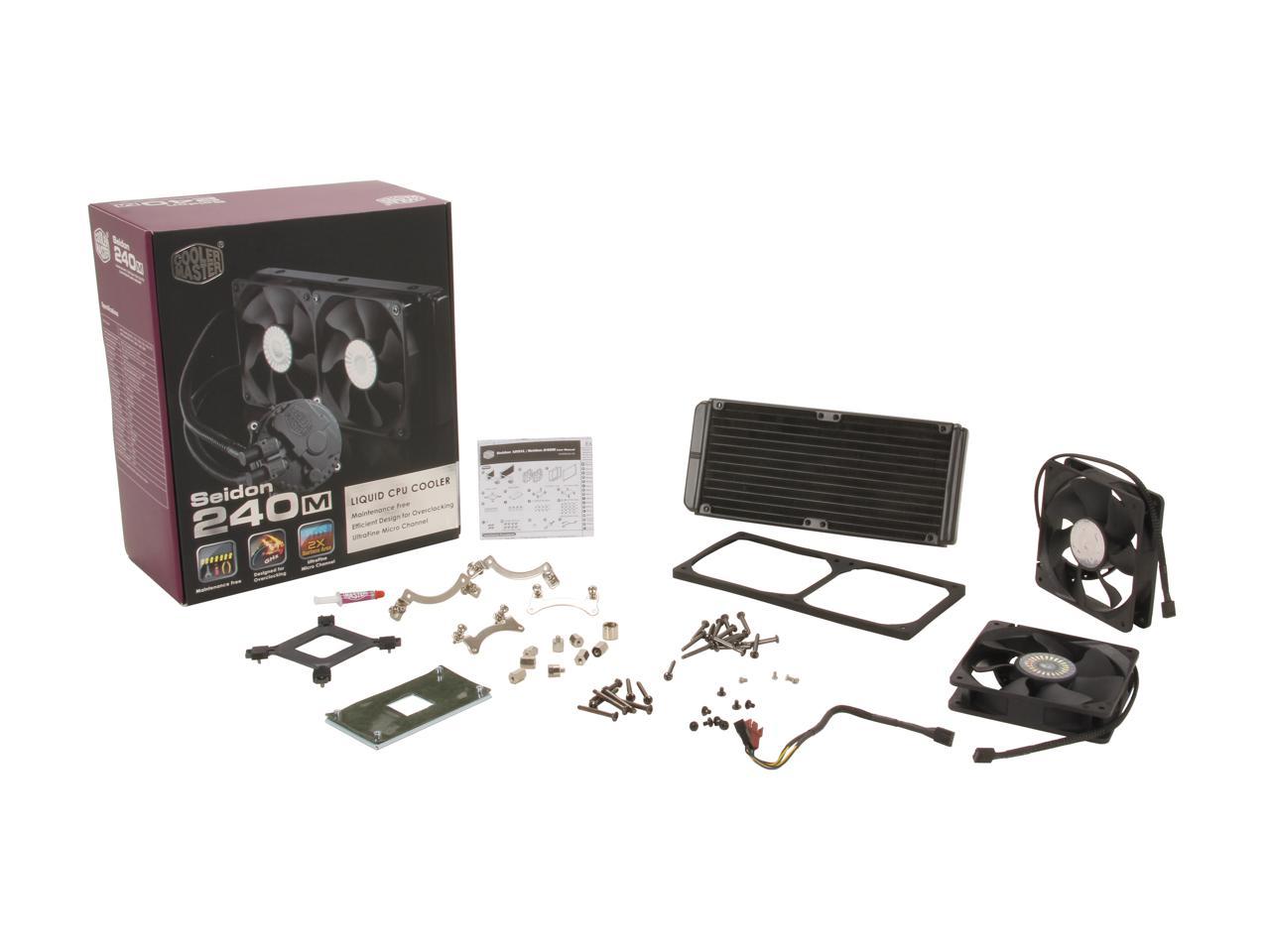 (230) Write a Review
OUT OF STOCK.
Overview
Specs
Reviews

Following the success of the Seidon 120M, COOLER Master introduces an improved CPU water cooler Seidon 240M. It has all the cooling technologies of Seidon 120M applied and has larger radiator up to 240mm. The larger radiator not only sheds more heat but also supports two 120mm fans. The compact design brings it to the masses. Also, the Seidon 240M is designed with zero maintenance and universal CPU socket compatibility.

Overall Review: I started looking heavily into overclocking recently. My old i5 2500 could overclock decently with the stock air cooler, but my i5 4670k was burning up at 75-80C core temps! And it could barely go past 4.4GHz. After a friend of mine told me the wonders of liquid cooling, I decided to get this kit. Installation is a breeze and works well with the Rosewill Thor V2 case. The included fans are noisy though- they're 4 PIN fans and I think I may lower the fan speed to quiet them down. My core temps idle at 30C and at load 45-50C which is significantly better than 75C! With the stock fan it was idling at 44C. I highly recommend this to anyone on the fence about liquid cooling.

2 out of 2 people found this review helpful. Did you?
Peter P.
Ownership: 1 day to 1 week

Pros: Assured fit with the Coolermaster HAF XM tower for my new build. Bolted right up no problem and attaching the giant copper heat plate to my MB was a breeze. My first watercooled rig. Small socket provided to assist in attachment of the Cooler standoffs. Prefilled Price was right with a rebate compared to the higher end air coolers I looked over.

Cons: I'll always worry about the possibility of a leak. In some circumstances you might want a cooler where you can route lines thru a case and have to fill it with coolant later. This cooler being fully assembled means you don't have a whole lot of play in positioning.

Overall Review: my i5 is always running too hot since it's oc'd to the danger zone most of the time. This cooler could absorb anything I tossed at it and CPU temp rarely hit 50. Easier to clean then a straight CPU cooler as the radiator is accessible from the top panel of the case. Nice setup. I have cats and fur has always been a problem, it seems to get in everything. The air cooler for my i5 needs monthly dust off treatments. We'll see how much ends up in the radiator.

Pros: Performs way above expectations! My current setup was banging on ~60 degrees under load, 70+ degrees under load with some overclock. Now, I'm sitting at 47 degrees under load, and maybe 60-some degrees with the same overclock. CPU idles about 1-3 degrees above case temperature at best. My previous cooler wan an older Coolit ECO 120, basically the predecessor to all the Corsair AIO (all in one) 120mm units. It was great in it's day for my dual, quad, and even six core AMD CPUS, but the 8 core Vishera with overclock (voltage hog) was just too much to handle. Installation was a breeze on my system. I'm using the fans in a push configuration with the radiator mounted to the top of my Antec p280. Perfect fit, perfect setup. The instructions, oddly enough, aren't terrible. (FYI, some cases with dual 120mm have the fan spacing kinda funny. To verify this unit will fit, get two 120mm fans and place them right next to each other, touching, if all eight holes line up this will fit your case.) With PWM (pulse width modulation (4 pin)) fan control and target CPU temp set to 40 degrees on my motherboard the fans run ~600 rpm idle and ~1500-1800 under full load. Most fans are pretty quiet if relatively unobstructed and kept at or below 1200 rpms. (Keep in mind, they could ramp up to ~2400, but there is no need as the system dumps heat so well.) At 1500 rpms, around 50% PWM speed, fans are just a smidgen above audible, but not at all loud enough to be annoying in my opinion. It's hard to judge sound, but the best way I can explain it is to say when my central heat kicks on, it is louder than my computer. Some have questioned why Cooler Master included fans capable of 2400 rpm...because they are quite loud at those speeds, but I like the option just in case I want to goof around and really push some high voltage during a benchmark or two. At 2400 rpm, they are loud, but for stock or mild overclocks I doubt you will ever need them to run past 1400-1500 rpms. At that speed they are pretty tame. I set mine up with the pump's power drawing from my "system fan one" 3 pin header (and it set to 100% in BIOS). Then I used the two PWM fan to one PWM plug adapter (included with the unit) to plug the fans into my CPU's 4 pin fan header, as I have better control over the CPU fan speed on my system. I don't know what else to say, this thing works...well. I haven't gotten the opportunity to compare it against it's rival AIO water coolers...but I can't imagine them doing much (if any) better. This system is simple and effective. Provided your motherboard has half way decent PWM control on the CPU header, you simply don't need a USB interface along with more software to make it work.

Cons: I honestly have none. It's functioning exactly as advertised.

Overall Review: Wow! Cooler Master has knocked it out of the park with this one. I haven't been this impressed with a CPU cooler for a long, long time. For the record... AMD FX-8350 @ 4ghz-5ghz MSI 990FXA-GD80 4 4gb 1600 Patriot Vipers @ 1600mhz 2 MSI 7870s in Crossfire @ 5760x1080 Eyefinity 2 Mushkin Chronos 120gb SSDs 2 Western Digital 150gb Raptor Xs Antec 1200 Antec p280 etc...etc...etc... PS: Do me a favor. If you go with a (any) water cooling setup, get some sort of airflow to your Northbridge and Mosfet areas on your motherboard. When manufactured they expect a standard CPU air cooler giving them a nice breeze, with setups like these that doesn't always happen. I'm personally using a pair of 40mm fans that came with an old set of RAM to provide such a breeze. With a water cooler your entire system will run cooler, but you still have to take care of your motherboard's hot spots. W

Cons: Pump gave out after a week. Wasn't even working well to begin with. Temp spikes were all over the place.

Overall Review: Kind of worked last week. Came back from a trip that took up this week and pump seems to be dead. 85*C+ spikes that shut down the motherboard. Installed stock cooler and saw 35*C on idle. A lot of people have good reviews for this. I blame it on Coolermaster's poor quality control. Will return and go with a different brand, next time. Huge waste of money. Should have build my own liquid cooling system.

Overall Review: I used this cooler on an AMD 6800K. It was probably overkill but I wanted to utilize the radiator area on the N400 case. It kept the system very cool and I enjoyed the near silence. However, the pump died this morning and CPU shut the system down. I was forced to install the stock heatsink/fan which was kept new in the box. I've forgotten the crazy sound a heatsink and fan make over the time I owned this cooler. I will RMA this baby and see how long the replacement lasts. Thanks for the 2 year warranty!!

Pros: Very, very silent cooling kit. Unless you crank the fans up but I like to leave it at default. Keeps my i7-5820k overclocked to 4.2ghz nice and cool at 52 degrees at maximum load. Installing this cooler was actually really simple and easy.

Cons: pump went out less then a year of use and cooler master rma is a joke

2 out of 2 people found this review helpful. Did you?
Manufacturer Response:
Hi Davis, We apologize for the trouble you had with our cooler. To remedy the problem with rma or any other issue, please contact us via the method below so we can rectify the situation. We wish to make things right. Respectfully, CMUSA Support. Phone: 1-888-624-5099 Site: http://account.coolermaster.com
martin p.
Ownership: 1 day to 1 week
Verified Owner
Amazing deal on an amazing cooler12/4/2014 11:10:31 AM

Cons: -Setup can be somewhat a pain -Radiator is somewhat large and clunky (be sure case can fit) -Best method is push/pull for this beast (so needing 2+ fans) -The stock CM fans it comes with are slightly noisier than my Noctua fans.

Overall Review: I was originally planning to purchase the Kraken X60 ($120) but this was an ad special and the reviews I had read put it just behind the X60 by a small margin. Being $45.00 cheaper than the X60 and only losing a few degrees on the benchmark, I couldn't pass up this deal. The Installation was fairly straightforward and although a manual isn't needed I have read about people placing fans the wrong direction. Fans! The best configuration for this massive radiator build is a push-pull method (2fans on each side of the rad), sucking in air and pushing it out the opposite end. This isn't needed but is recommended for maximum cooling performance. I unfortunately could not fit all 4x fans in my case to assist the Seidon 240m, as I have an Haf XB Evo modular case paired with a GTX 680 4gb Classic. When everything was fully installed the GPU was 7milometers short of fitting. As to not press my GPU against the fan I than preceded to take 1 of the 2 fans out blocking the PCI-E slots and than moved the fan to a open fan slot in my case (which now has 8-fans). Coming from a Noctua NH-D14 cooler (one of the best air-coolers) I can say I am glad with this purchase, and would purchase another Cooler Master product anytime as they have proven once again why I use them in my builds. Case: Cooler Master Haf XB Evo GPU: Evga GTX680 Classified 4gb Mobo: Asus z97-a CPU: 4790k (4ghz) Cooler: Cooler Master Seidon 240m Ram: 8gb G.skill Ripjaws HDD/SDD: WD Cav.Black 1TB / Samsung 840m