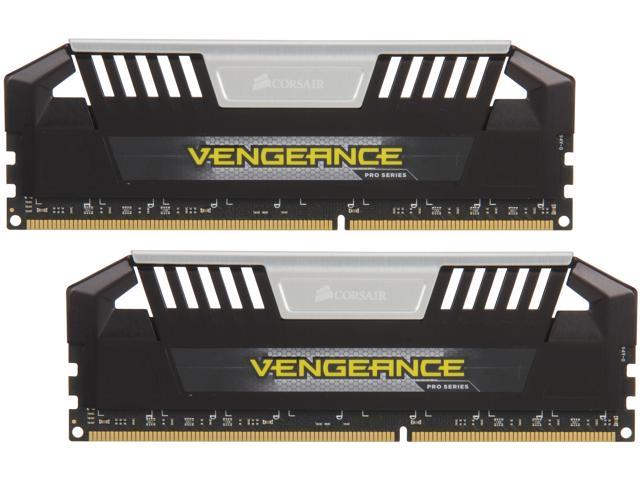 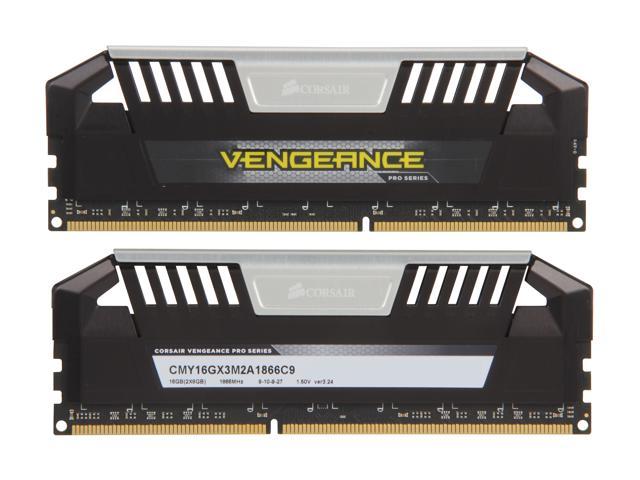 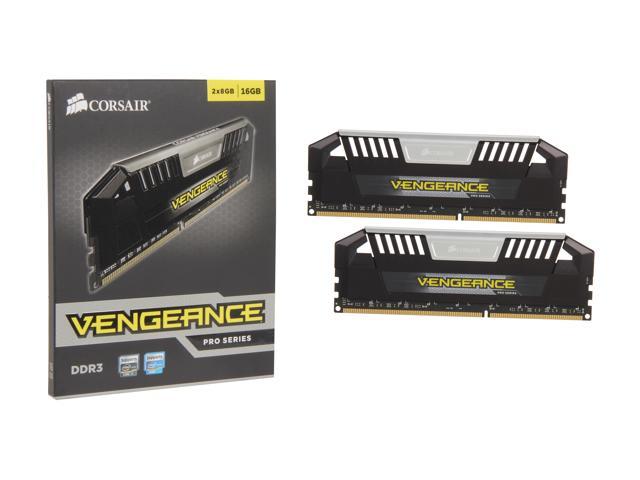 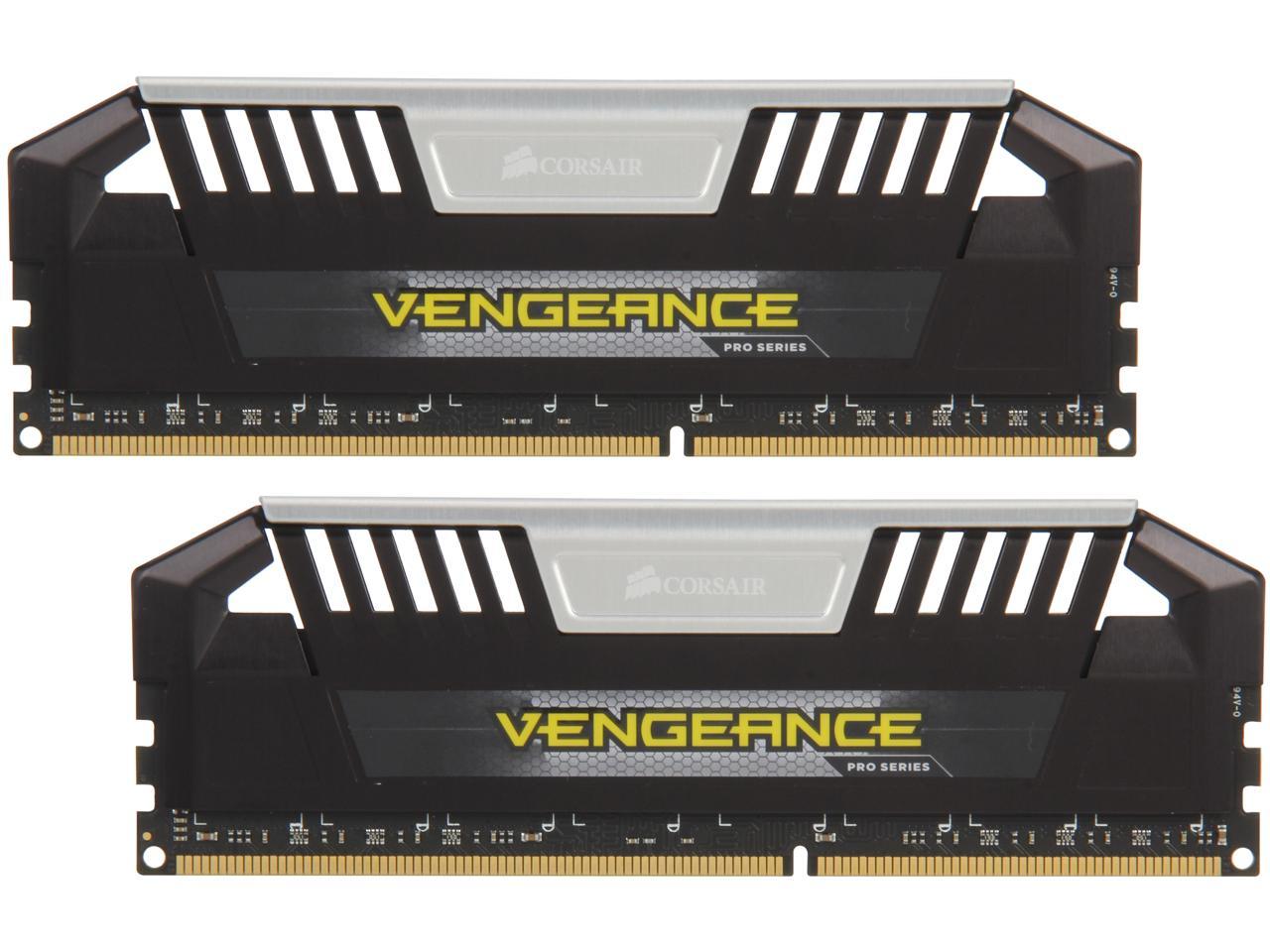 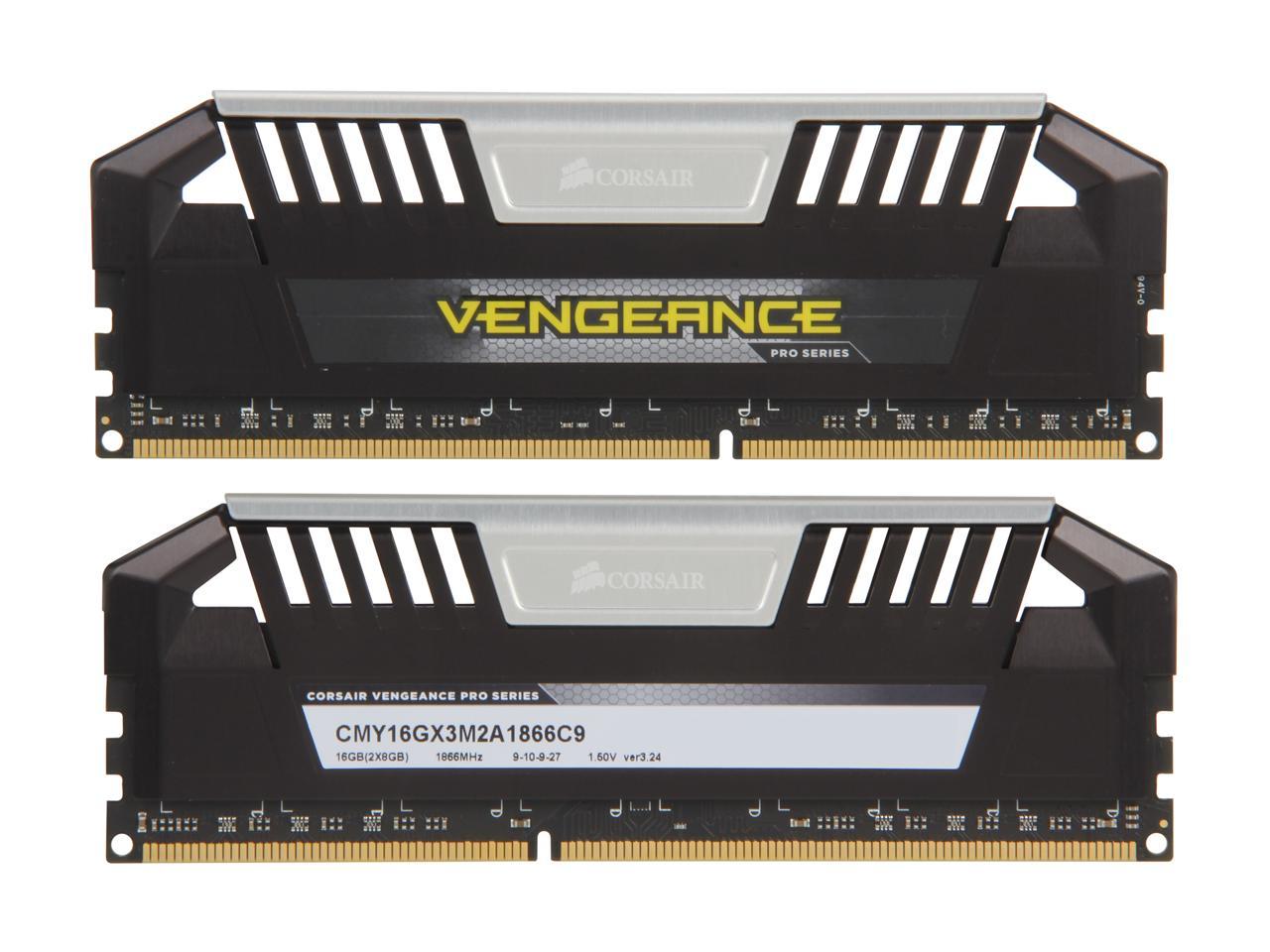 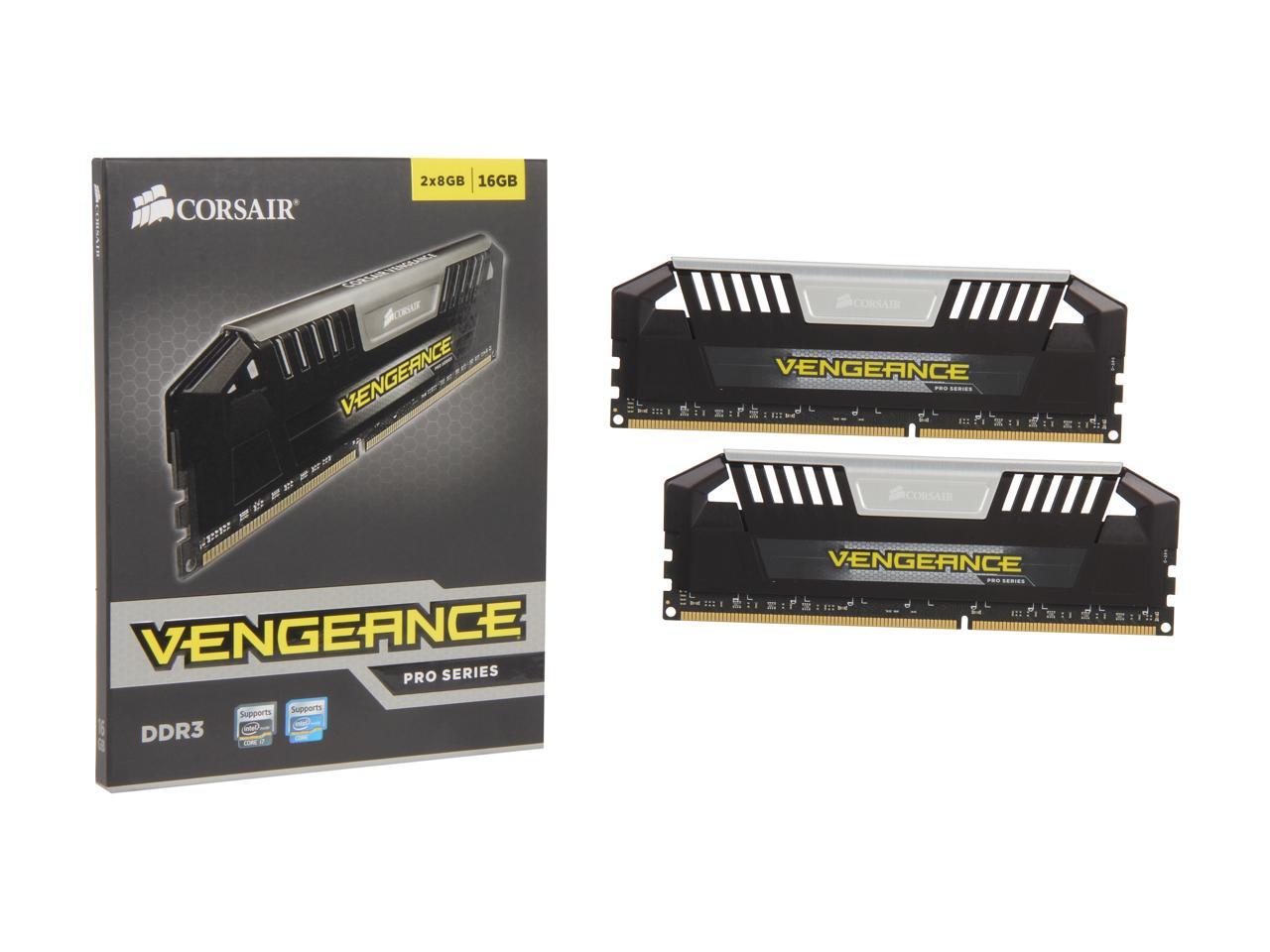 Pros: Good price and decent timings for DDR-1866 RAM. No issues running XMP profile at stock voltage. Ran for about a month and put it through it's paces. No issues.

Cons: Heat spreader is pretty cheapo. Stamped sheet metal and the colored portion is just a clipped on piece. No "functional" issue, just seems flimsy. A far cry from my old DDR3-1600 G. SKill Super Pi stuff I had with a thick metal hinged heat spreader.

Pros: I purchased 32-GiGs worth of these memory sticks. They are 1866mHz and easily overclockable if thats your forte. Quality memory sticks from a well known computer parts manufacturer. Lifetime warranty on any memory sticks is a huge plus. Great for musicians who have lots of VST's and VSTi's in their DAW's that hog up lots of memory. Also great for people who people who play modded minecraft with tons of mods installed. Also great for people who do lots of video editors & video rendindering. Memory is pretty cheap in price these days, so why not have extra memory available..... Better to have more and not need it, than less and in need of it. :)

Cons: First and Foremost, this is NOT the fault of Corsair. For those angry and wondering why they can only get these memory sticks perform at 1333mHz instead of 1866mHz like they are suppose to operate... The reason being is as follows... Its because AMD processors only supports 1 memory DIMM at 1866mHz per channel that are 1866mHz in speed. This is also true for many of the motherboards out there. You have to find motherboards and CPU processors that actually specifically say that they actually support (DUAL 1886 DIMMS per channel) and NOT 1 DIMM per channel. Also, ALL FX CPU's by AMD do NOT support dual channel 1866, and they state it right on their support section of their website... So be very vigilant and read carefully first before committing. Figure out if your motherboard and CPU can be able to handle and operate higher clock rate DIMMS such as 1866mHz. For those that might be a bit confused... Each memory channel on your motherboard holds 2 memory sticks. which means you only have 2 channels, which totals up to 4 memory sticks. Some motherboards out in the market can hold 8 memory sticks which is a whole different conversation. Basically see if the motherboard and CPU information actually says if you can install 2 memory sticks that are 1866 or higher within each memory channel on your motherboard. Save yourself the hassle and research first. Dont make the same mistake I did. My AMD FX-8350 and Gigabyte GA-990FXA-UD5 does NOT support (dual 1866mHz memory sticks per channel). I currently am operating these 32-GiGs memory sticks at 1333, Until I change over to Intel i7-4790-k CPU and Asus Motherboard. Its really sad, because ive been using Gigabyte for 8 years. And I feel like they have let me down completely on this. I love Gigabyte boards because to me, they have always been extremely stable. But now the game has changed and my hand is being forced. That also means saying goodbye to AMD, and switching over to Intel hardware for my MAIN use computer.

Overall Review: I hope my information helped someone from going through the heartaches I did. and I hope it helped you on your journey to getting your killer computer. :)

Pros: Rock solid at the specified settings. I used them on my new ASUS Maximum VI Hero board. My CPU is the Intel i7-4770K, and it runs all my stress tests at 4.5 GHz while the memory is running at the specified settings (9-10-9-27-2T and 933 MHz, which is DDR3-1866). My CPU cooler is the Noctua NH-U14S, which comes with a 150mm fan that just clears this memory in the first DIMM slot closest to the CPU.

Pros: They're pretty They give you a 7.9 score in the WEI without overclocking The red part of the heatsink is removable, assuming you want to use them in a different build with a different theme Has plenty of OC headroom due to the low base voltage and good timings

Cons: Neither stick would work at first. While this really can't seem to be an issue with the RAM due to the fact that if they really were dead, they would still be dead or at the very least unstable at anything but the worst settings. I tried everything I could think of and then some to get them working at first, and got nowhere. I tried them again the next day and had zero issues anywhere.

Overall Review: This is an update to my previous review. After trying them again the next day, there were no issues whatsoever and everything worked perfectly as it should. Memory diagnostics showed no errors. I would like to apologize to Corsair for getting worked up before, when there must have been something I was doing wrong, or something else was causing issues that isn't now. I would just like to say that if at first it seems like there could be no other cause other than faulty modules; give it a day and try again. I am still clueless as to what caused my trouble in the first place, but it has resolved itself and everything is working great now. Specs- Intel i7-3770k@4.5GHz Asus Maximus V Formula 2x8GB Corsair Vengeance Pro 1866MHz AMD Radeon HD 4850 (placeholder card) Intel 520 120GB SSD WD 640GB 7200RPM HDD Azza Solano 1000R case Corsair GS800 PSU

Pros: Great looking, really nice heat spreaders. Goes great with all my red led fans. I haven't tried OCing these and do not really plan to, the speeds are great. 9-10-9-27. Hard to find 8gb RAM with these lat. speeds.

Overall Review: Make sure you know what DIMM slots to use. My Asus P8z77-v-pro mobo has 4 slots, I had them filled with 2gb x4 sticks and figured the 2 sticks would go into A1 and A2 slots. Nope. Asus website says A2 and B2 slots when running only 2 sticks of RAM. After reseating the RAM everything worked great!

Pros: I almost bought the blue, but now I'm super happy I went with the red colored Corsair Vengeance Pro DIMMs. These sticks perform great as other users have said, but the icing on the cake for me is the way these sticks look as peer through the transparent siding of my case. The pictures here on newegg.com don't do these sticks justice. Like some of you, I was kind of iffy on the shade/color of the red, but in reality the color is a much deeper, dark cherry metallic red and don't look "as childish" and plastic-y as they appear in the pics on this page (if you know what I mean). Seriously, the actaul color is WAY different than the pic depict and that is a good thing. So if you want RED DIMMs, but are iffy about the color, just go with these...you won't regret it for one second!

Cons: Red piece on-top of the stick wiggles just a TINY bit if you touch it, but how often do you handle your DIMM sticks?

Overall Review: Final Thought: The red color is 100000X sexier than the pics depict. If you want red DIMMs to go along with your red-colored themed custom desktop build, buy these...you WILL NOT regret it!

Pros: They look great and they worked with no problems what so ever but the part I didn't expect was how well they take overclocking. I'm currently running them at 2145mhz with 9-9-9-24 timing and they are rock solid stable. I have stress tested this new system like crazy and this memory doesn't bat an eye.

Pros: This RAM overclocks very well, I have it at 2400mhz right now.