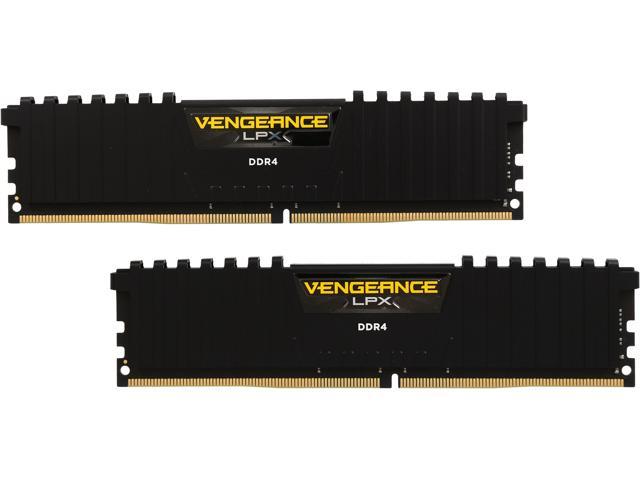 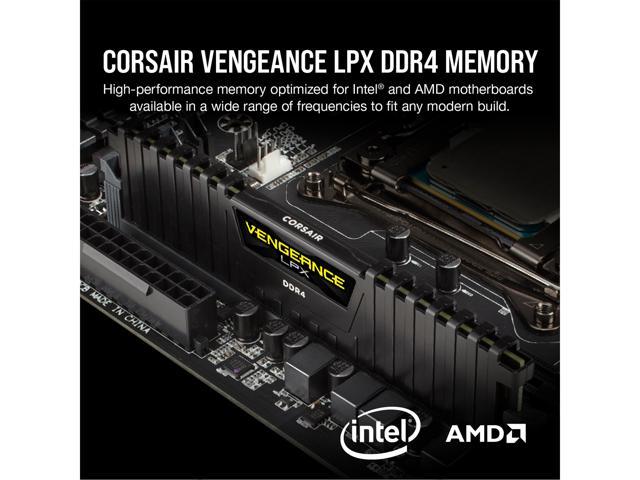 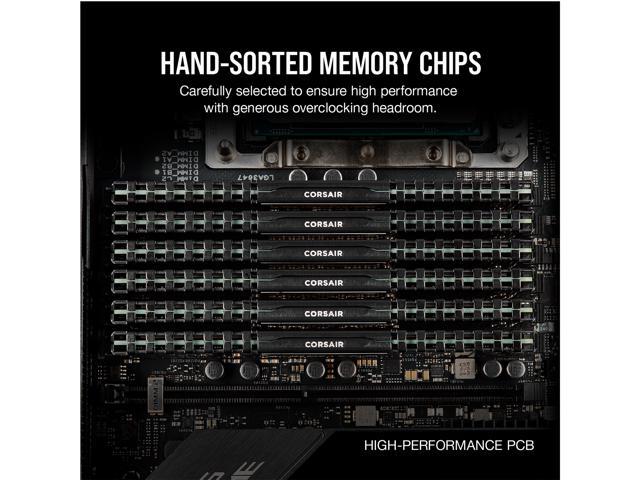 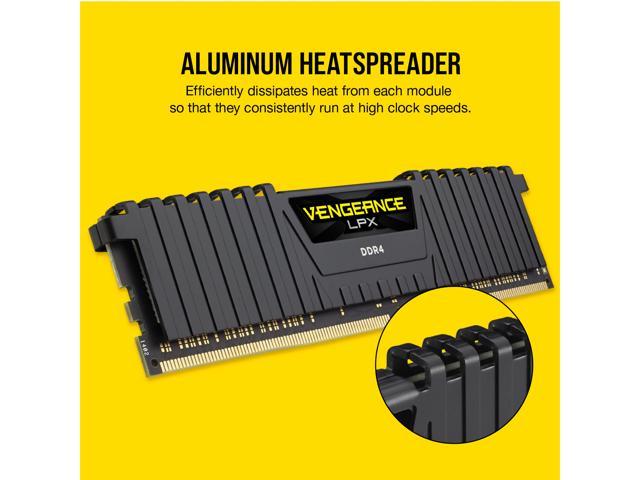 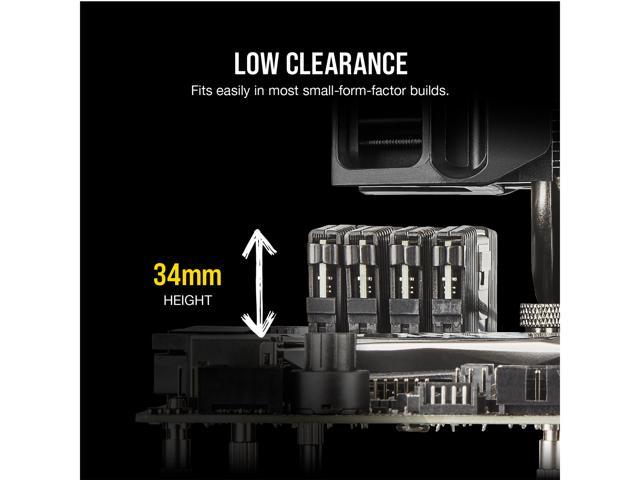 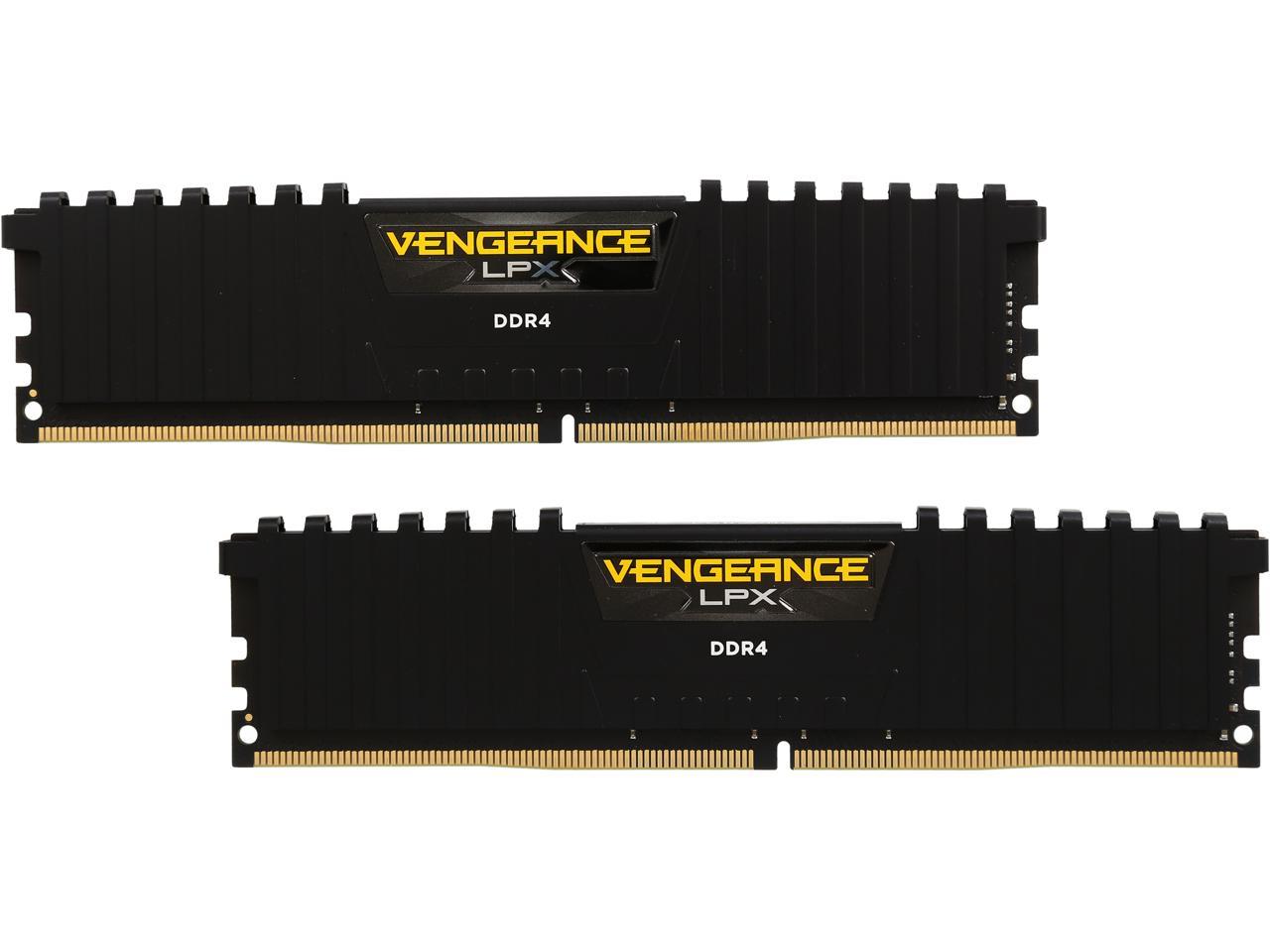 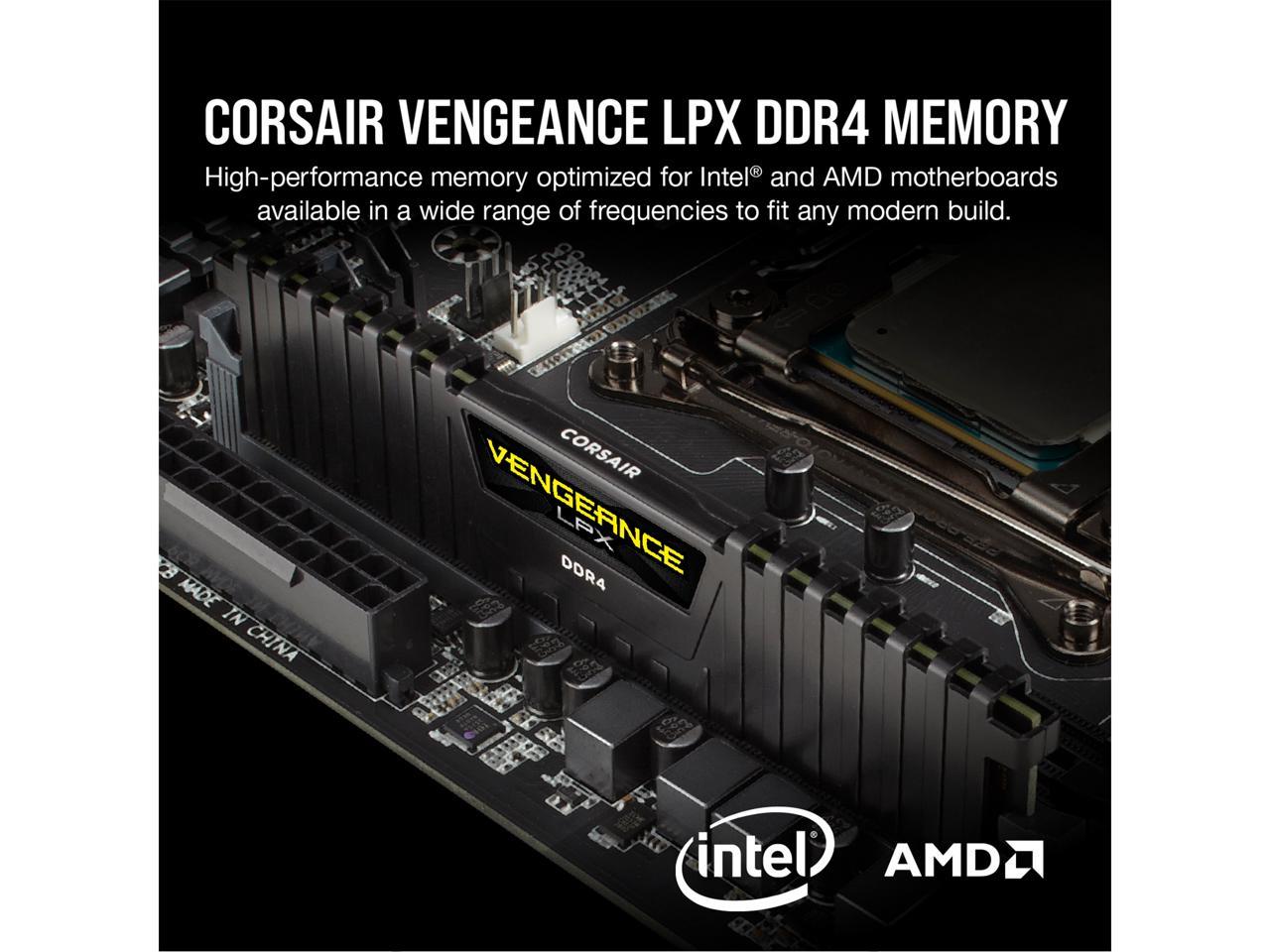 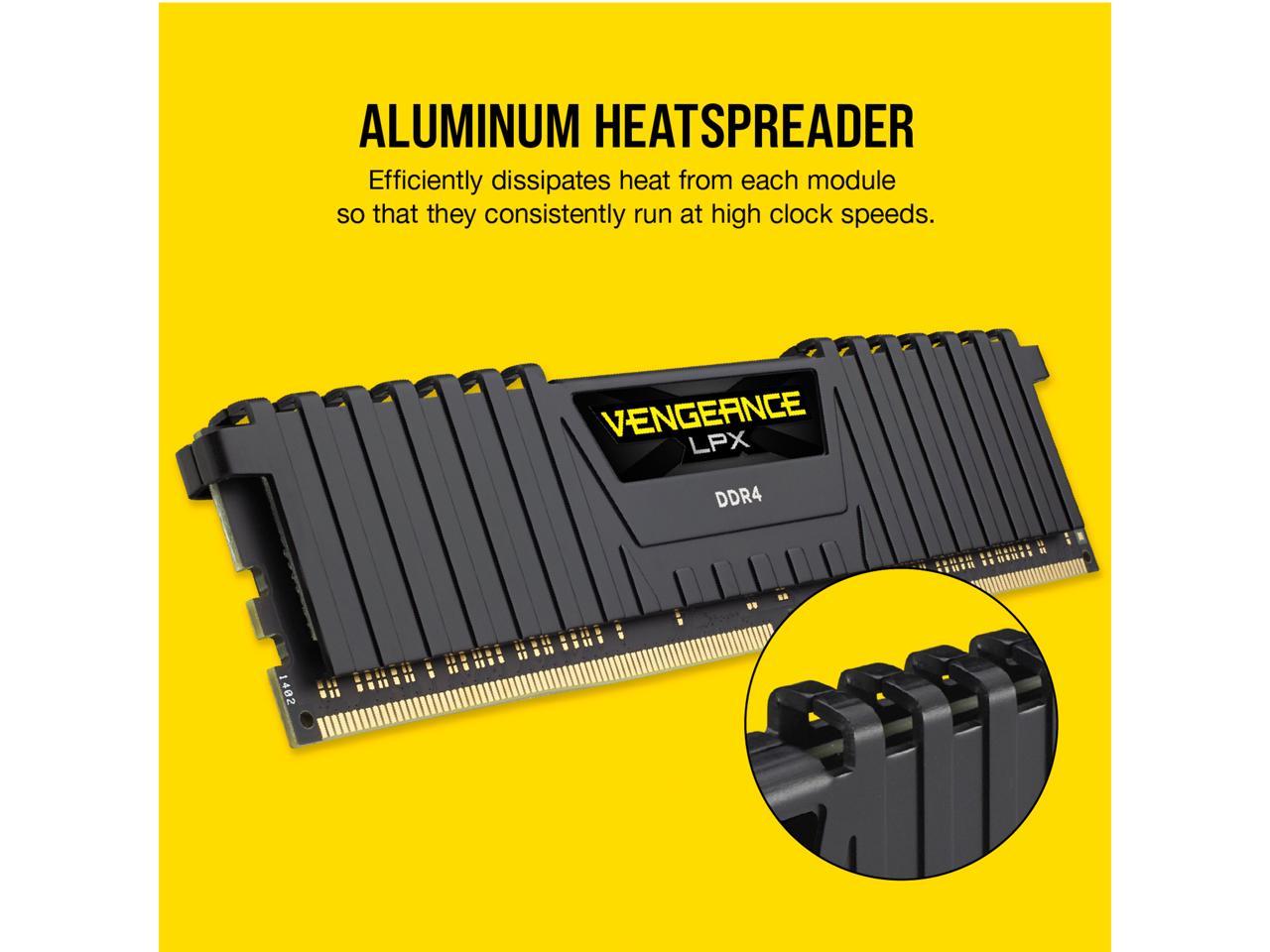 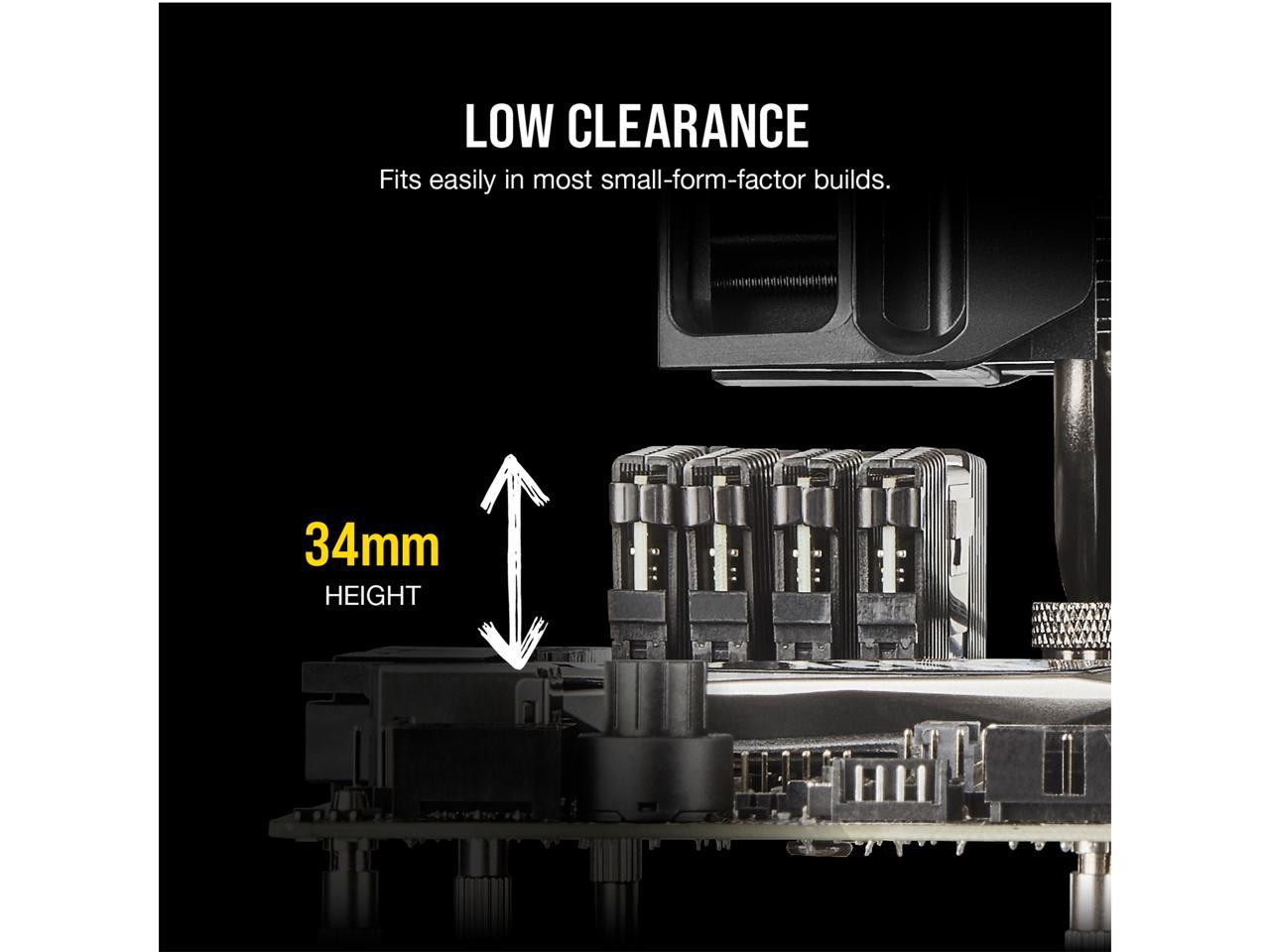 Pros: • Price is reasonable for a mid-range set of DDR4, especially as DDR4 is new amongst PC enthusiasts. Ram prices come down as technology advances • Reliability of Corsair products, I have had many different PC related products made by Corsair and the reliability and quality is world class. • RAM support XPM 2.0 which allows for easy automatic RAM overclocking, DDR3 usually only had one profile • The set is rated to run at 2400 Mhz (at 1.25v), that is obtained to use the XMP Profile 1, you can also set it at XMP Profile 2 which will allow it to run at 2666 Mhz at 1.35V • RAM timings did not loosen up on the primary timings when choosing between XMP1 and XMP2, it remained at 14-16-16, tRAS did loosen a bit from 31 to 35 but that is negligible • Low voltage required to run at rated and 2666 Mhz speeds. Low voltage result in low heat and you can’t go wrong with that in terms of MTBF • Color scheme, it is a personal preference, it goes well with my Asrock X99X Fatal1ty Killer board. • RAM sticks are low profile, so it does not interfere with aftermarket air HSF (Heat Sink Fans) coolers. • Impressive bandwidth improvement over DDR3

Cons: • Honestly can’t think of any, price will come down in time as DDR4 migrates across all newer chipsets.

6 out of 6 people found this review helpful. Did you?
Patrick S.
Ownership: 1 week to 1 month

Pros: Corsair has come out with some very nice DDR4 memory. With its aluminum heat spreaders, low profile design and reliable performance they look as good and they perform. Test platform is a Gigabyte X99 UD4 LGA 2011-v3 with a i7 5820. The ram fit into this system with ease. Corsair claims the compatibility has been tested across the entire line of X99 boards . After install I ran the typical Memtest86 just to check that I didn't get a bad chip. First a couple of hours of Memtest86 and not a glitch. Then into the BIOS and selected the proper XMP profile and reboot. Windows 7 loaded and everything looks great. A couple of run with ADA64 and its running as it should and timing are exactly as advertised. Next test was the Intel Extreme Tuning software memory test. Everything checks out this ram runs great and is doing just as it should. I really like how the memory looks and with this size heat spreader it should fit with any CPU heat sink. With DDR4 being an entire new platform it's hard to do comparisons. I tested the same ram but 2666 model and this is showing similar results. Also most software is not fully DDR4 compatible yet. Corsair DDR4 provides excellent performance, easy XMP set up, standard sized heat spreaders, 1.2v and no need for a cooling fan.

Cons: There has been improvement in the heat spreader especially the low profile design. I still don't like how it raps around the ends of the PBC. I have run into clearance issues on some small systems but not this one. It would be nice if they had billet aluminum like its competitors instead of stamped. Price is still a little high but it will come down its just a matter of time. Its offering limited performance gains for the price at this point in time.

Overall Review: The Corsair Vengeance LPX 2400 both meet and exceed my expectations on Intel's latest X99 Express platform. They provide XMP high performance capabilities and well as look great. The new heat spreaders and look is truly impressive. Although DDR4 is a limited feature right now with very few platforms that support it, it will soon be a common commodity on the PC market

3 out of 3 people found this review helpful. Did you?
David S.
Ownership: 1 week to 1 month

Pros: These new Corsair DDR4 Vengeance LPX memory kits are very fast and exceeded my expectations. I installed these on a Gigabyte GA-X99-UD4 LGA 2011-v3 paired with an Intel 5820K CPU and the system is quite fast but not extraordinarily quicker than a comparable x79 system. The Vengeance modules are very eye pleasing and have the typical Corsair quality feel and build. There were no issues installing the 4 module set in the Gigabyte UD4 motherboard, and the system booted without a hitch. The Intel XMP 2.0 timings defaulted correctly at 2400MHZ and 1.2 volts, a good sign indeed. Using the Gigabyte bios I was able to overclock the modules to 2666MHZ at C15, but they needed a voltage increase to 1.35v to maintain stability as well. They were warm to the touch at 1.35 volts. After the initial boot and ensuring everything is stable I ran the new MemTest86 v6 beta for 3 complete cycles and no issues surfaced or errors displayed, so the Corsair quality is showing. Running version 5 of AIDA 64 I was able to reach the following benchmarks at 2666 C15; Read: 47233 Write: 46912 Copy: 53722 All respectable scores and should prove very beneficial running memory intensive tasks. Using Adobe Photoshop Elements 13 on Windows 8.1 x64 Pro was very enjoyable and lightning fast playing and adjusting several digital photos converted from 35mm film. The speed of the memory helps tremendously using these types of programs.

Cons: Price of course, it seems. They are expensive out of the blocks and hopefully we will see some price drops coming our way. I would like to get another set for my x99 UD4 motherboard.

Overall Review: This is a great set of ram, easily overclockable to 2666MHZ speed, if you don’t mind upping the voltage a bit. Fast, stable and works wonders with memory intensive programs like Photoshop. I don’t think you will be disappointed with this set of 16GB DDR4 memory.

3 out of 3 people found this review helpful. Did you?
Michael W.
Ownership: 1 week to 1 month

Overall Review: Booted on first try in an Asus X99 Deluxe with an Intel 5820K. Ran Prime 95 all night on all cores (24+ hours) with no issues. Windows 8.1 Pro runs extremely smooth, as do all games with no stutters (using a Zotac GTX 770 4GB). Coming from an x79 2011 setup with 16GB of DDR3, I wasn’t really expecting any real-world mind-blowing speed increases in games, but I did notice slightly better performance in FSX, which is very RAM and CPU dependent. But since I was coming from a fairly modern setup (X79), that wasn’t what I was looking for when testing the RAM. I was looking for stability, and this RAM has that at a modest price. I can’t comment on this RAM’s use in HTPC cases because I am using an Antec 1200, but to my naked eye there should be no reason these wouldn’t work based on their height. They also don’t get overly warm. I am a long-time Corsair fan. Most of my platforms over the years dating all the way back to the Pentium II featured Corsair RAM. I have never once had to RMA a single stick of RAM. But even if you’re a little worried, their lifetime warranty proves they stand behind their product. The fact that these are among the cheapest DDR4 16GB kits make this a no-brainer to me. I would not hesitate to buy.

2 out of 2 people found this review helpful. Did you?
Edwin P.
Ownership: 1 week to 1 month

Pros: Good thermal performance without a crazy big heat spreader. I wouldn't call it "low profile" because the RAM is still a standard size, but it doesn't have giant fins coming off the top. Respectable overclocking Lifetime warranty Superb Corsair quality and service. I have several components from Corsair, and they never dissapoint.

Cons: Based on MSRP, you can get better timings for the same price

Overall Review: Performed as expected at stock speeds, as well as 2666mh with 1.35 volts. It would not run at 2666 at 1.2 volts. Timings remained the same at either setting. In addition to the memory overclocking, I was able to get my 5820k up to 4.45 ghz with 1.272 core voltage using this RAM in quad channel. Overall, if you're looking for ram that can overclock and still fit underneath your giant CPU air cooler, this is a great option. You my be able to get better timings with a lesser brand and save a little cash, but the performance difference is really negligible in most applications. I would rather go with a proven brand than chance getting something that can barely run at the rated specs.

2 out of 2 people found this review helpful. Did you?
Ethan H.
Ownership: 1 week to 1 month

Pros: Corsair's memory offers mid-range DDR4 performance for a low-end price. Yes, it is higher than the DDR3 equivalent. That's a given until DDR4 becomes the mainstream memory option. The LPX series comes with low profile heat spreaders that, as other reviewers mention, do not hit even large heatsinks on crowded motherboards. It cleared a Noctua NH-D14 on a micro ATX motherboard. Speed is OK but not stellar. Memory latency is at the slow end of the performance DDR4 range, while the 2400 MHz speed is near the middle. Most real-world applications and games are not hugely sensitive to memory speed. so this isn't a huge concern. Even with the low-profile heatsinks, the thermal performance of the LPX memory was exceptional. I used the memory in a micro ATX chassis built for silent operation rather than high airflow. Running memory-intensive benchmarks and tests caused no errors and DIMM temperatures remained in a good range. Setup is also easy. XMP profiles are included for both default 1.2 V 2400 MHz and overclocked 1.35 V 2666 MHz operation. Configure the BIOS, boot, done.

Cons: This particular module does not quite hit the sweet spot in Corsair's Vengeance LPX lineup. Is it worth an additional $10 over the 2133 MHz kit? Yes. Likewise, I would argue the 2666 MHz memory option is worth another $10.

Overall Review: The real benefits of DDR4 memory are higher density (a pricey option for now) and quad-channel bandwidth. If your X99 motherboard offers 8 DDR4 slots, filling them with either two of these Corsair kits or the 2666 MHz version would be a good choice. Performance is acceptable, pricing is good (for DDR4), and the thermal solution is superb.

1 out of 1 people found this review helpful. Did you?
Dustin H.
Ownership: 1 day to 1 week

Cons: not much availability of ddr4 boards at this point (zero amd)

1 out of 1 people found this review helpful. Did you?
Scott S.
Ownership: 1 week to 1 month

Pros: This is the first time I’ve used or implemented DDR4 ram had to search to find a computer to test it in due to ddr4 being so new but I did get to use it for a while and it was impressive. This is a great kit 16GB 4x4GB 2400MHZ with good low latency numbers 14-16-16-31 Very sleek and low profile this allows the use of large CPU coolers without clearance issues. A must have for Extreme gamers and Graphic hungry systems… Corsair makes quality everything and this ram is one of those. I performed many RAM stress tests and this ram never even showed a slight hint of a glitch during the 14 hour testing round.

Cons: This RAM Kit has my approval for its design and performance just not the price. However DDR4 is still very expensive and so are the motherboards they work with, I will be waiting till prices come down before buying in to the x99 motherboards and DDR4 memory.

Overall Review: Only removed one EGG due too high price but this will come down over time with supply and demand. And i would like to say the system i tested it in wasn't much faster then my DDR3 2400mhz system