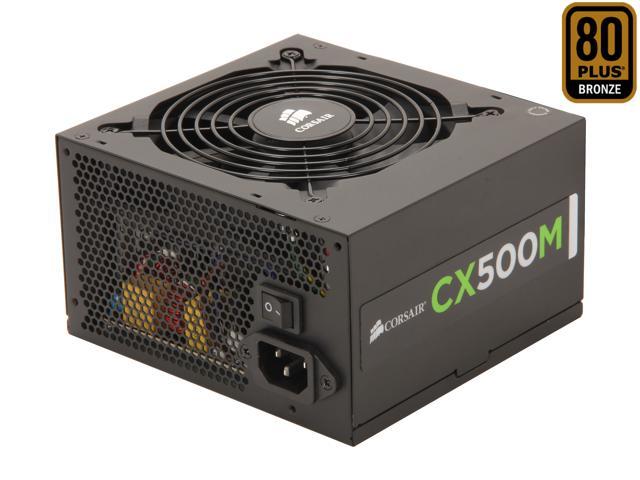 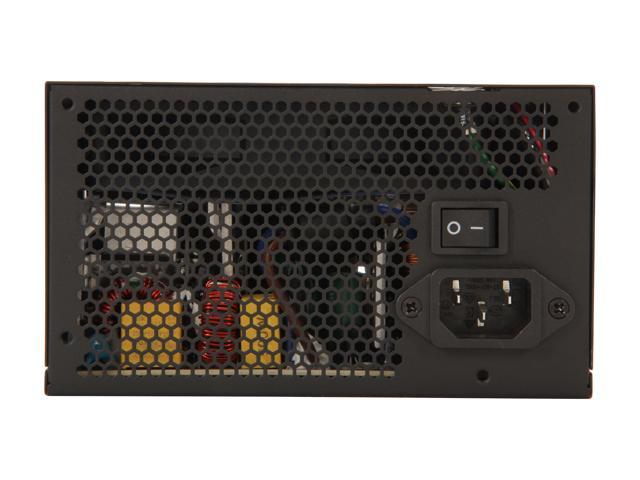 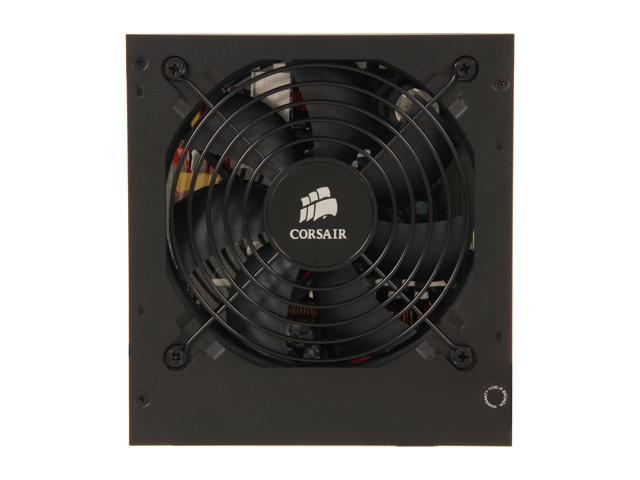 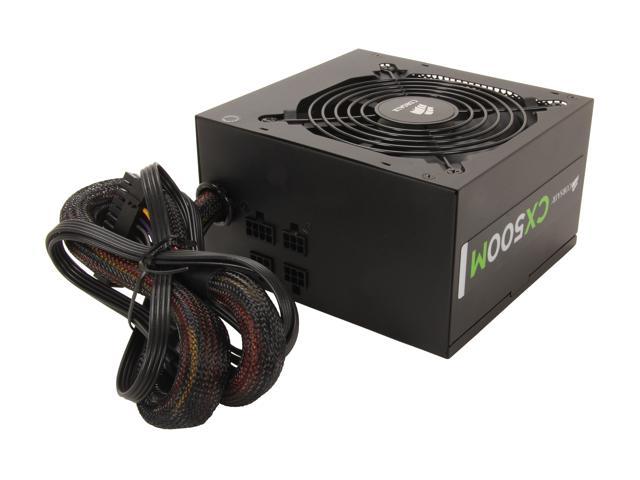 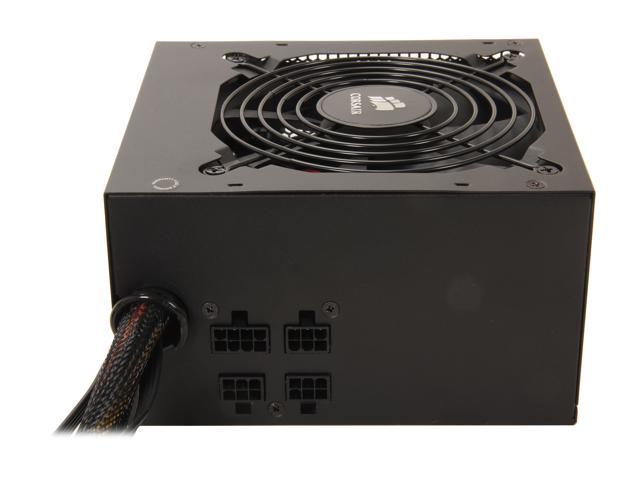 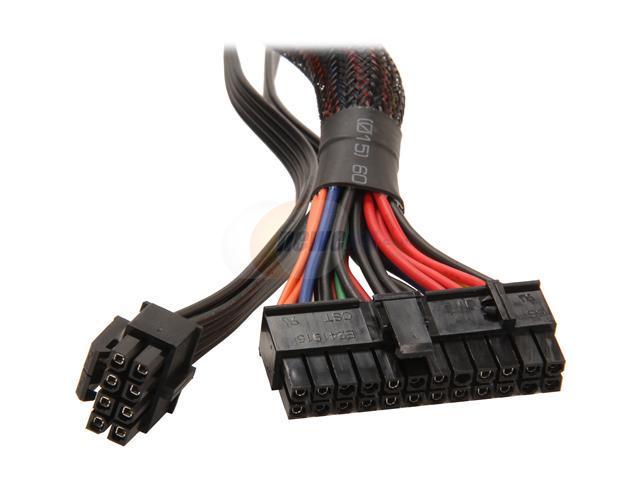 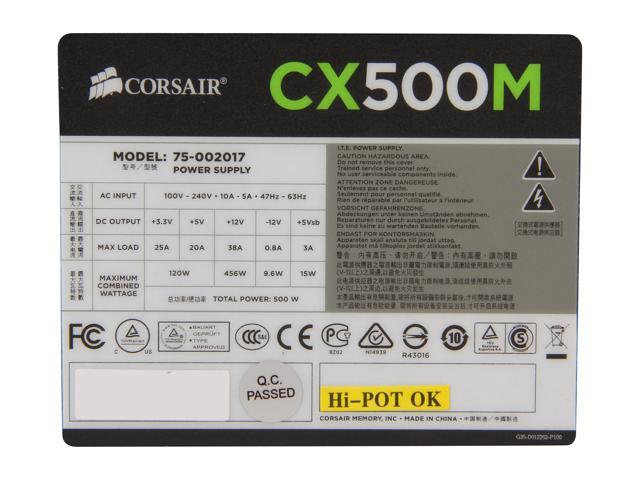 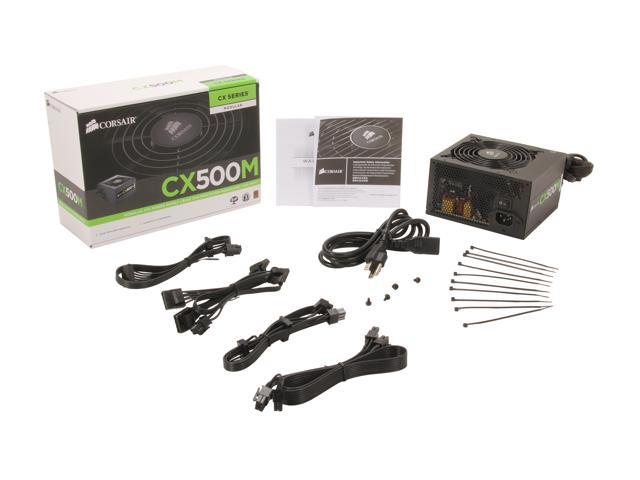 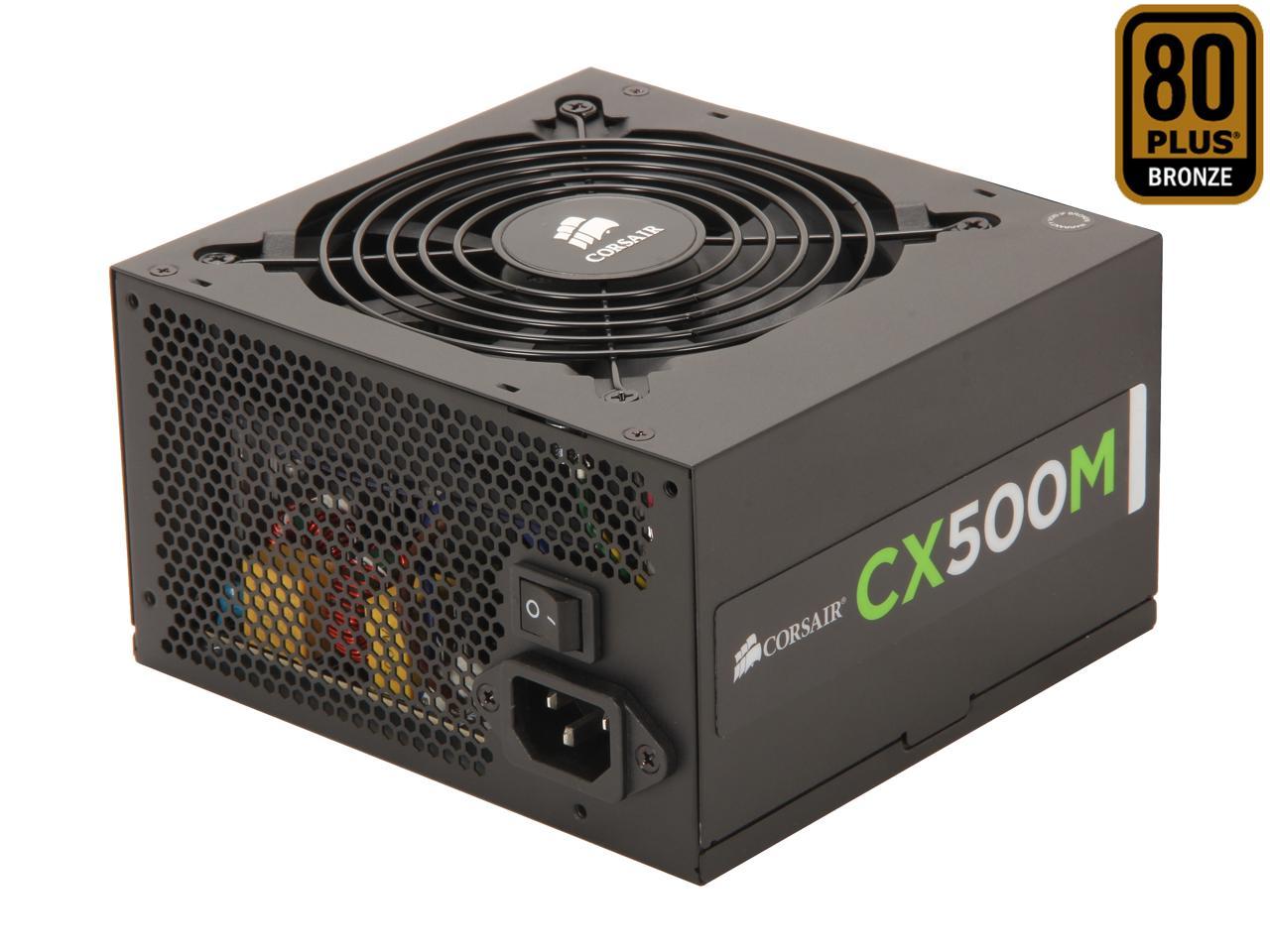 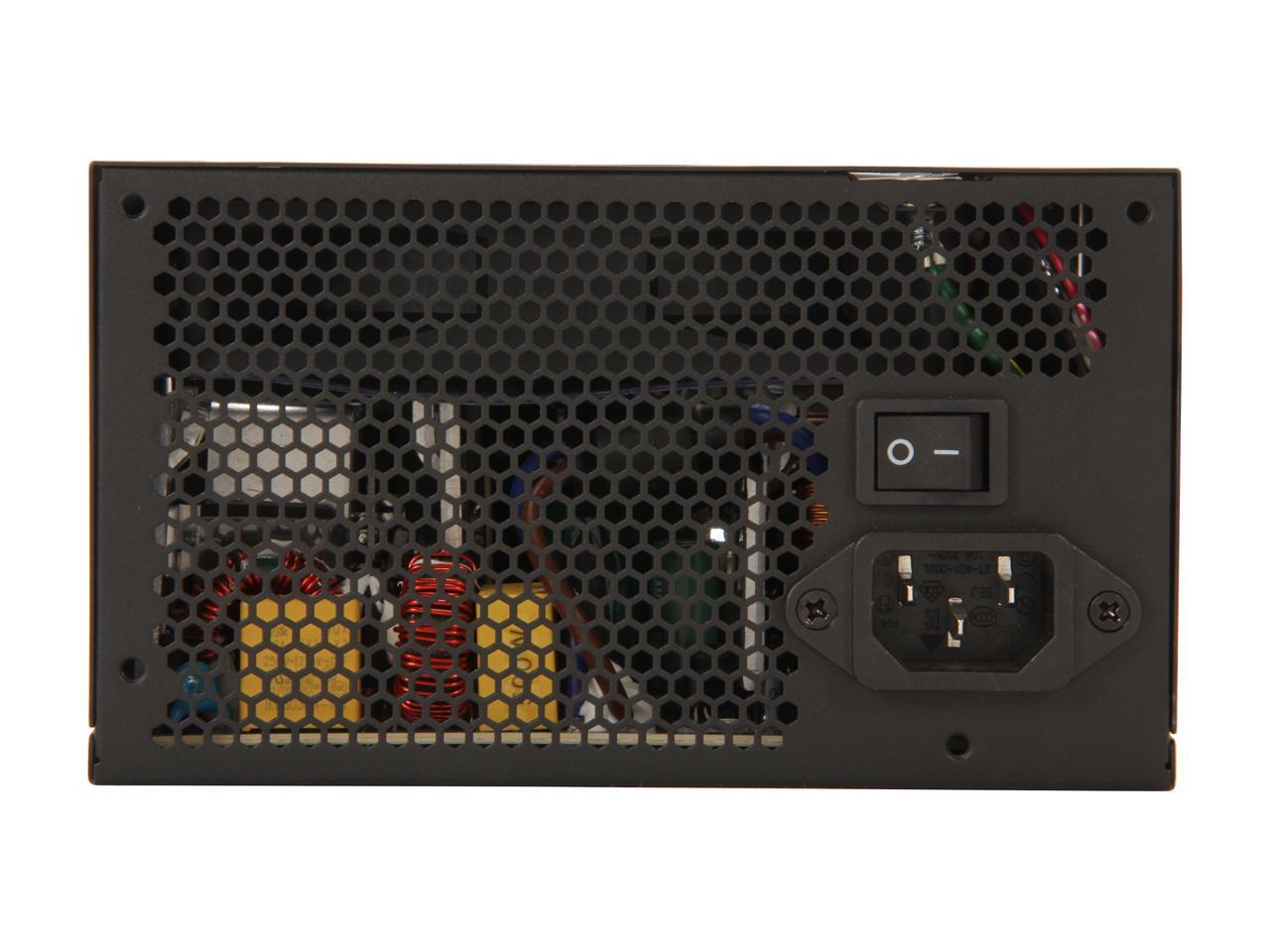 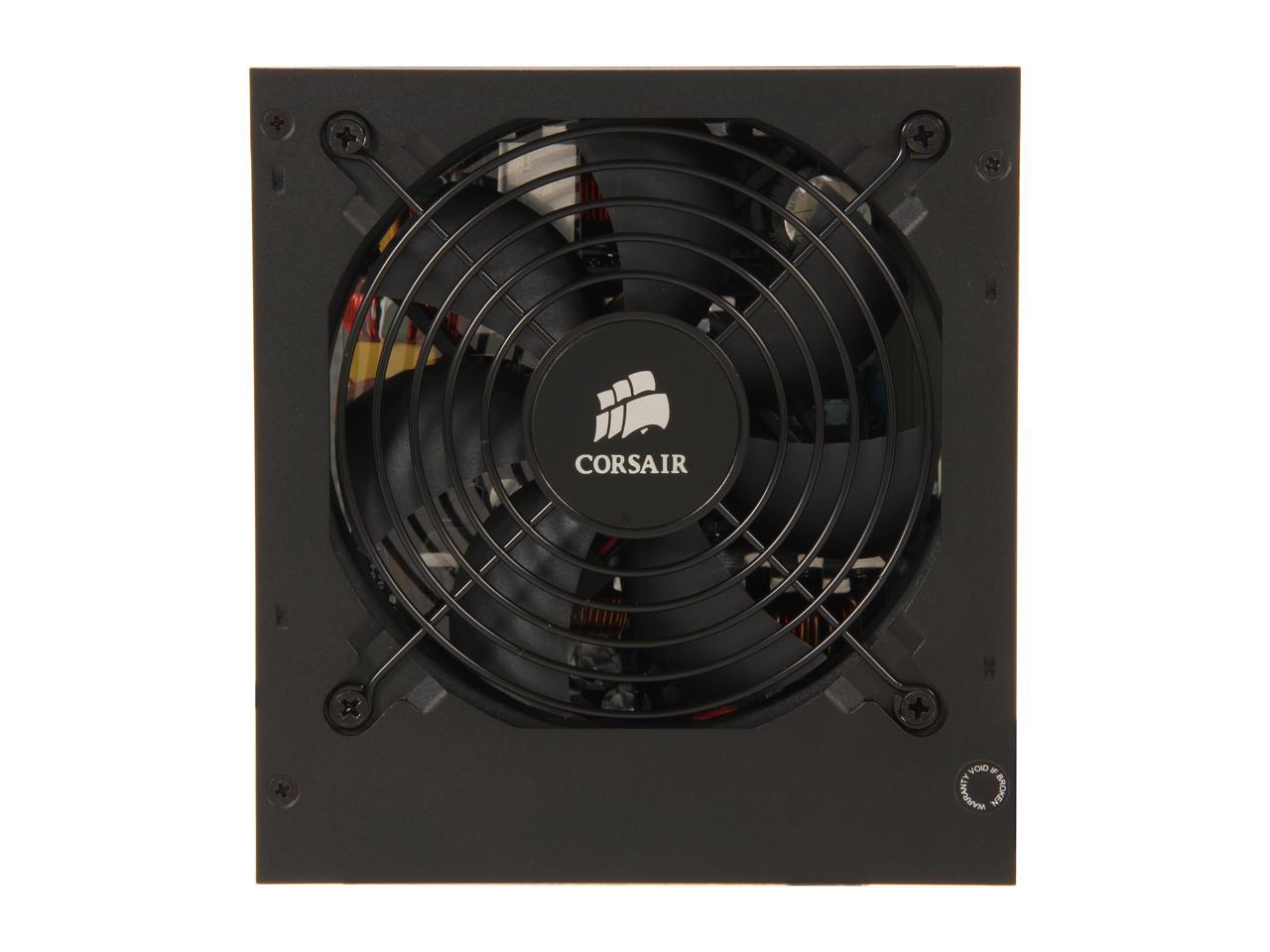 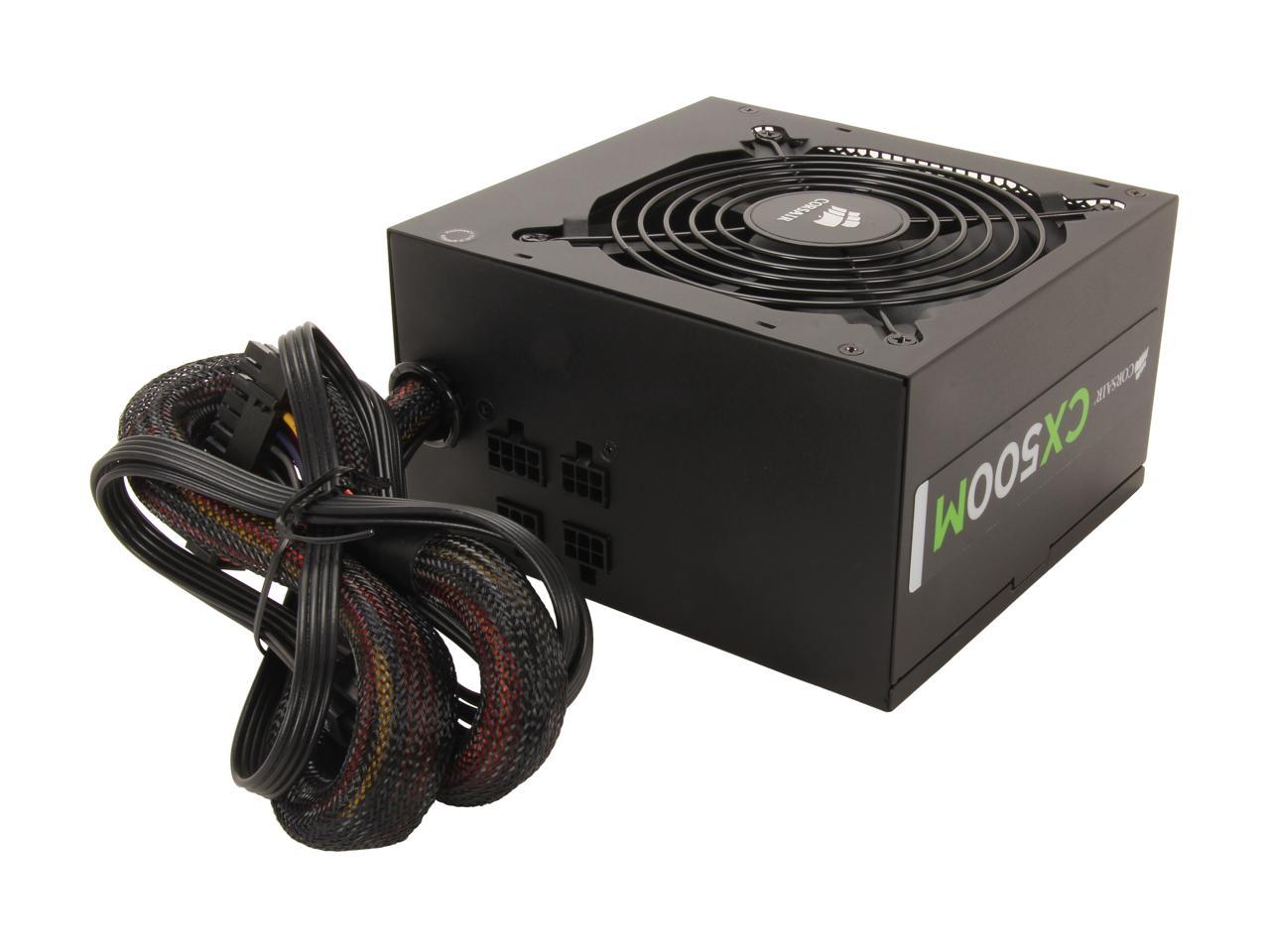 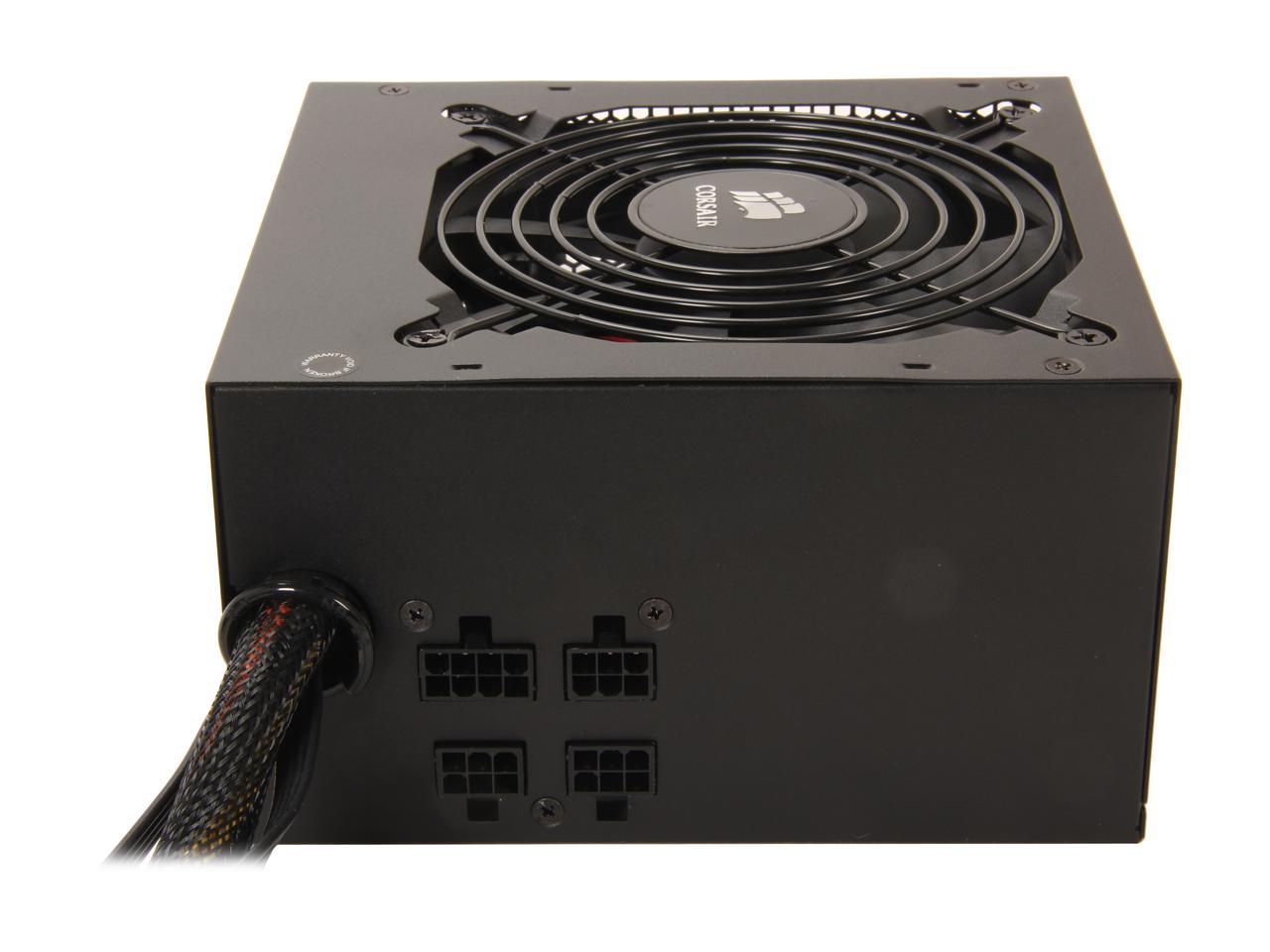 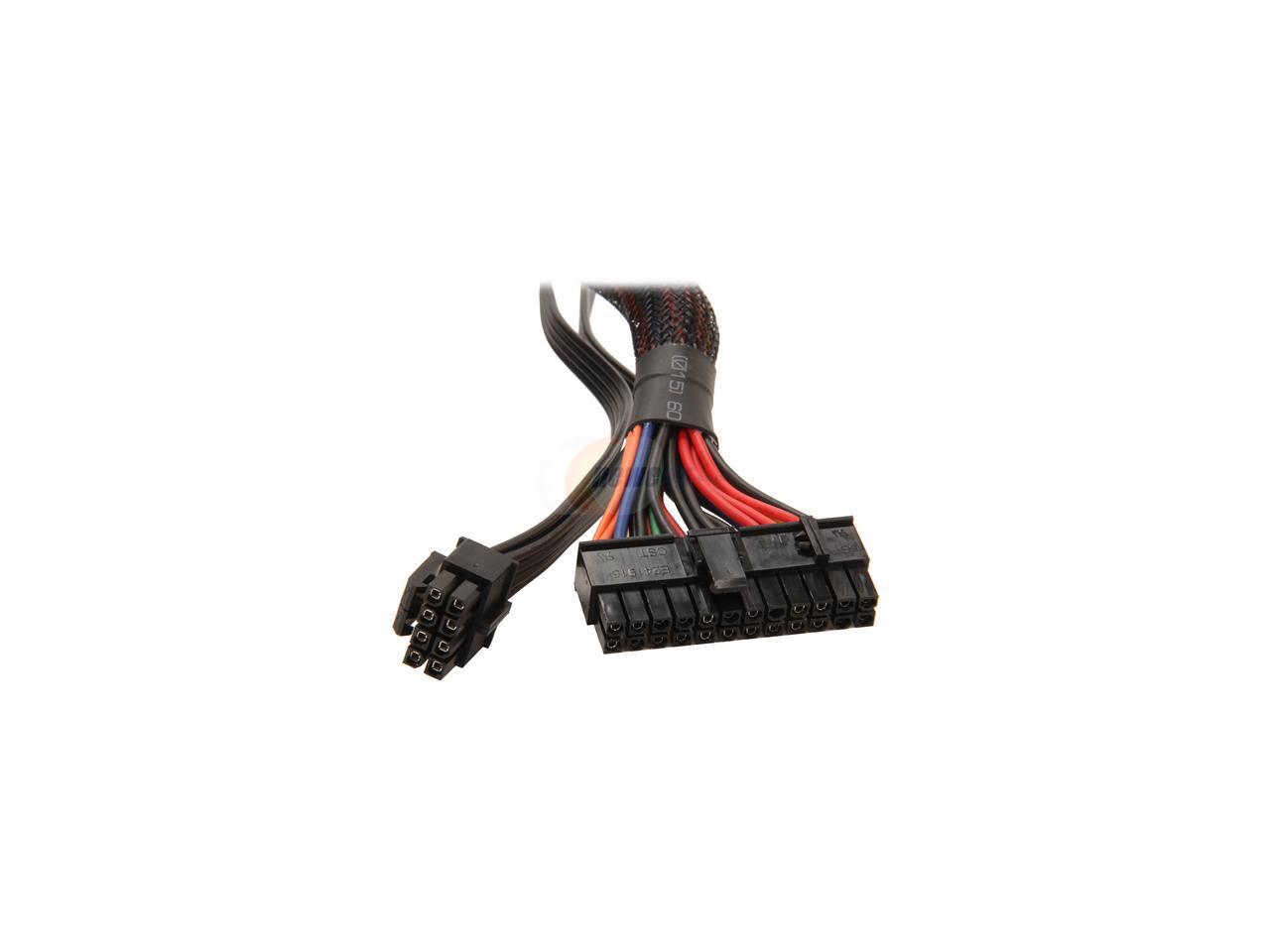 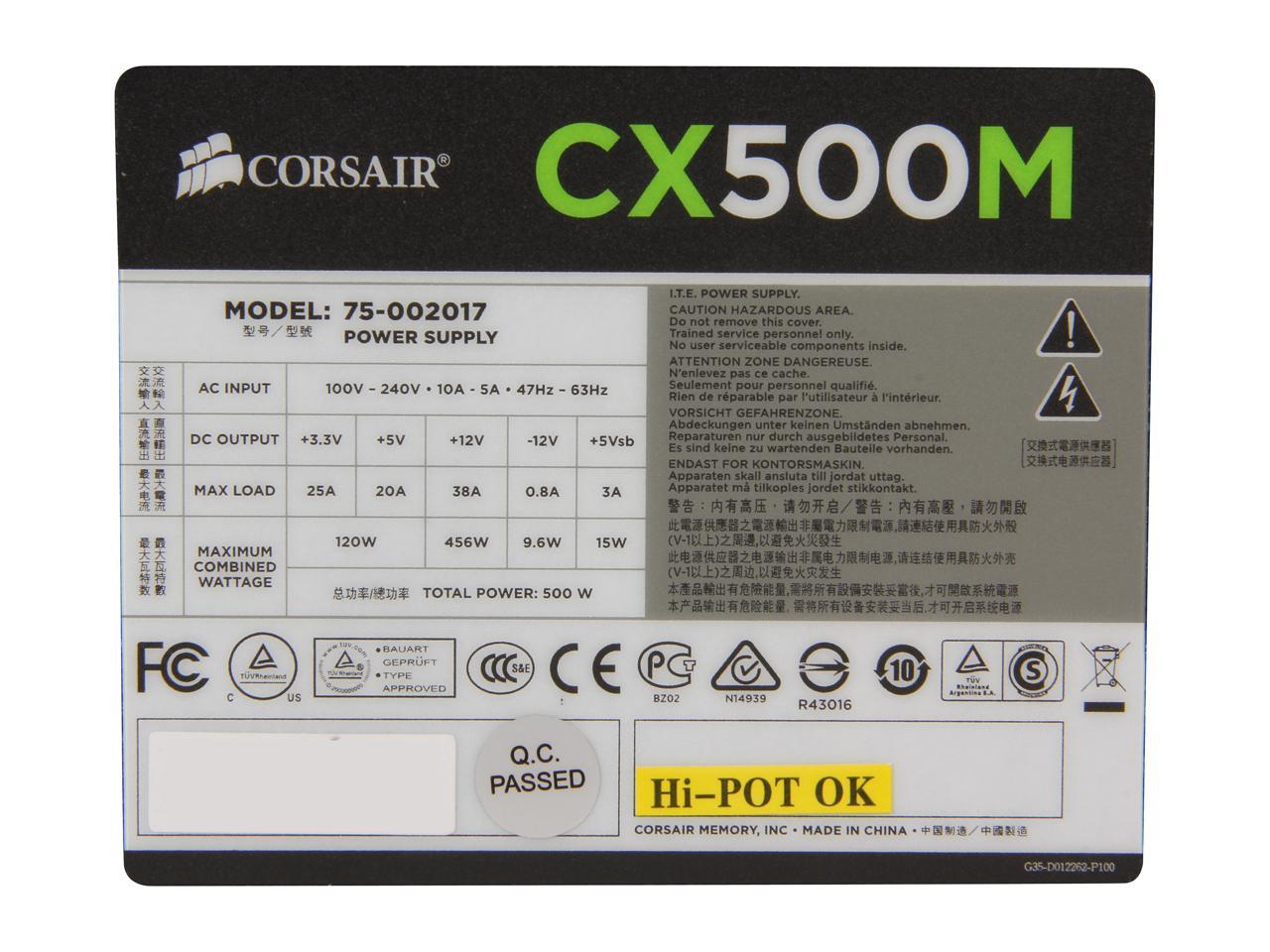 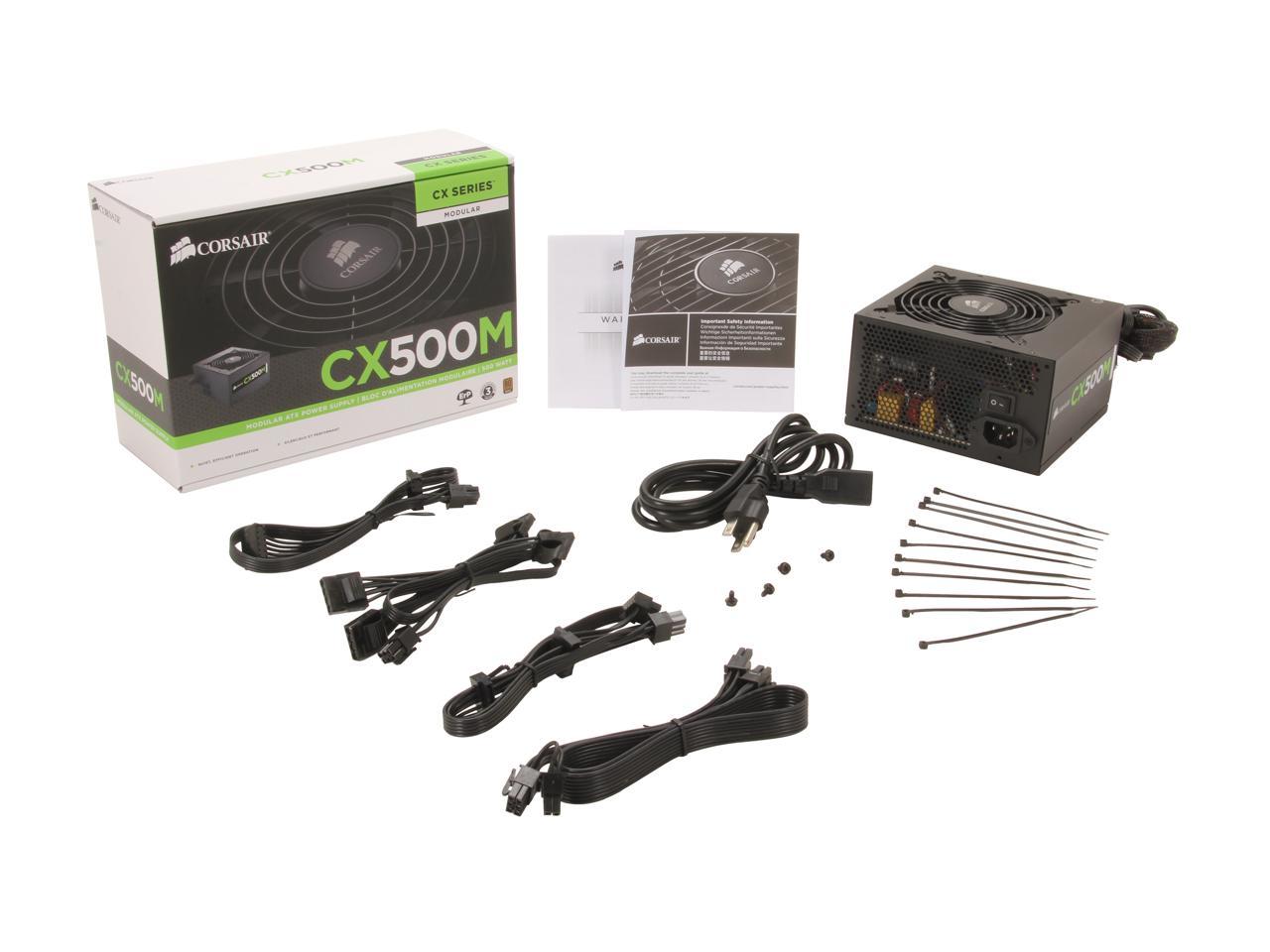 An excellent choice for basic system builds and desktop PC computer upgrades, offering high reliability, low noise, and a simple, restrained look. 80 PLUS Bronze efficiency rating means better use of input power and less waste heat generation. And the semi-modular design is helpful in your effort to build a clean system with the least possible clutter. 80 PLUS Bronze certified efficiency and clever fan design allow for little or no detectable fan noise during regular operation. Since the peripheral power cables aren’t hard-wired to the power supply, you can connect only the cables you need for your exact configuration of PCIe cards and storage devices. The rest of the cables stay in the box, and not in your PC’s case where they can add to the clutter and interfere with airflow. Every Corsair power supply is designed by our California engineering team and built to our exact specifications. The same care that goes into the design and testing of our renowned high-power enthusiast power supplies also goes into the CX Series Modular, because you need confidence and reliability regardless of your build budget. Once you’ve installed a PSU, you shouldn’t have to think about it. Employing a thermally controlled fan makes the CX Series Modular quieter at idle, and the large diameter reduces noise even when you’re pushing your system hard. CX Series Modular is built and tested to strict standards for trouble-free installation and smooth operation.

Learn more about the Corsair CX500M

Pros: i only buy power supplies from 3 major manufacturers, corsair being my first choice. perfect for a box that has low power requirements.

Pros: At 140mm, it's exactly the same size as the bracket in my Armor A30 case. The psu it replaced was 20mm larger, and took up entirely too much space. It runs cooler and quieter than anything I've used previously, and every connector in it is very high quality. I couldn't be happier with this purchase. The fact that I got this on an impossibly good sale was just a bonus. I wanted quality, and that's exactly what I got.

Cons: The 24-pin was a bit long, but was far more flexible and maneuverable than the shorter and fully modular one it replaced. As a result, it was still the better option. Don't get me wrong, I'd still like it to be shorter, but it was a best case scenario long cable.

Overall Review: I spent almost three weeks researching various psu's to creatively cram into my A30 case to replace my old x-connect 2(which considering it still works after 7 years of continual use, I have to say it's a better psu than it's given credit for). This did the trick beyond my wildest dreams. If I had to do it again, I think I'd spring for a 650w version so I had a little more freedom with high end parts. Alternatively, I'd like to go 80 plus gold or platium next time(if I can find it in 140mm) because even bronze runs much cooler than the old x-connect did. I was surprised. This switch alone dropped my cpu load temps by about 3 degrees C, partially because it covered the top fan less, and partially because it generates less heat. That may not sound like much, but when's the last time changing a psu dropped your cpu temps?

Overall Review: I got this for my daughter-in-law's PC. It's a modest Athlon IIx4 system with an ATI 5770 card in one of Rosewill's mini towers. There is simply no way to effectively hide cables in one of those mini towers, and the PSU we originally installed had a very noisy cooling fan. This Corsair PSU is quiet, and we were able to run only the cables needed so the interior is much tidier with better airflow.

Overall Review: My CX500M is very quiet at idle, but under gaming loads (i5 4670K + GTX 760), the PSU fan whirrs up and become the single noisiest component in my build. By comparison, my older PC P&C Silencer Mk III 550W unit is much quieter under similar loads, and that's even with my Corsair unit in a padded case and the PC P&C in a non-insulated case. Would recommend this for low-powered builds only, for which it is a great option.

Pros: ran for a couple of days delivered the advertised power

Cons: after running well for a couple of days, the fan on this PSU experiences a stuck bearing, or goes off balance, or something else happens, and the fan starts rattling like crazy. This happens every 3 to 5 hours

Overall Review: I can restart the PC, or turn it off and on again, might take a couple of times, and get the fan back on center and/or the bearings loose. But within the next 3 to 5 hours, the same thing will happen. Given the weight of the PSU, it will cost as much to send for RMA as the PSU cost originally. So, lesson learned. I would avoid this model, and will probably avoid any CX Corsair, and spend more to get something with a better build quality.

Pros: It works at this time. hope it works forever after this ordeal.

Cons: you need to be handy to fit this to mobo; poorest qualtiy control on 24 pin; could destroy your mobo, scar your fingers.

Overall Review: My first corsair psu..This is the second unit though (a replacement for one that has 24 pin that can't be pushed in all the way- reason pin is 0.42mm wider than my previous psu that fits on all 4 motherboards . Yes I had to find and use my caliper to get to the bottom of the issue in the 3rd hr (3hrs)). 7days later, I got this replacement, I first measured it and this one is narrower by 0.05mm compared to my standard psu that fits, so happily, I proceeded in installing this one. Guess what, I could not fit this thing the same way as the first one. Tried to measure again. This one should fit due to given tolerance. 2hours- I did everything in my power not to split my motherboard or soldering in the board by resting my left fingers below the board while pushing the 24pin with my right hand- it never worked. If I forced it in, something is gonna give. Until...... I used a paperclip. I hope I don't need to return this one for any functional reason in the future.

Pros: -500W with Promo rebate made this $40 -Modular plugging was fun

Cons: I'd really be fishing for negatives here...

Overall Review: I got this for a buddy's build... I stockpiled old parts from my rig when I upgraded for myself. Eventually needed a PSU and scored this on sale with rebate. We recently put it all together and this was a breeze to hook up and route everything. He's running with a XFX R7 360 2gb and having fun with that. I even have a 750W Corsair PSU in my rig, not as modular as his but overall satisfied with the bronze PSU's.

Pros: Semi-modular so I can remove unnecessary cables.

Cons: Died after a month of use. There wasn't any heavy or stressful loads on the PSU.