OUT OF STOCK
Sold by: Newegg
Shipped by Newegg
This item is currently out of stock and it may or may not be restocked.
Out of Stock
Add To Wish ListFound on 8 wish lists 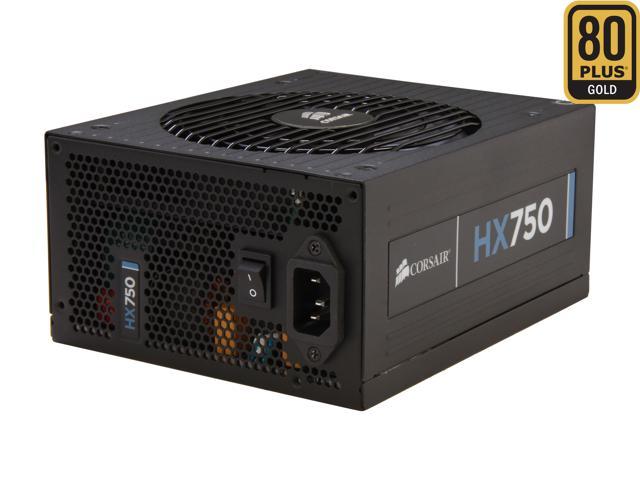 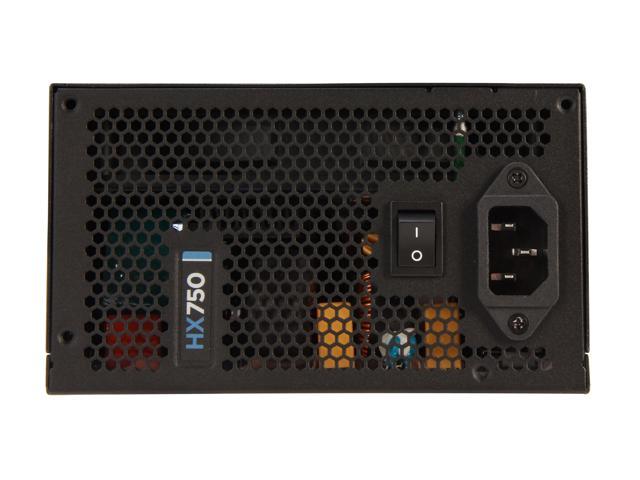 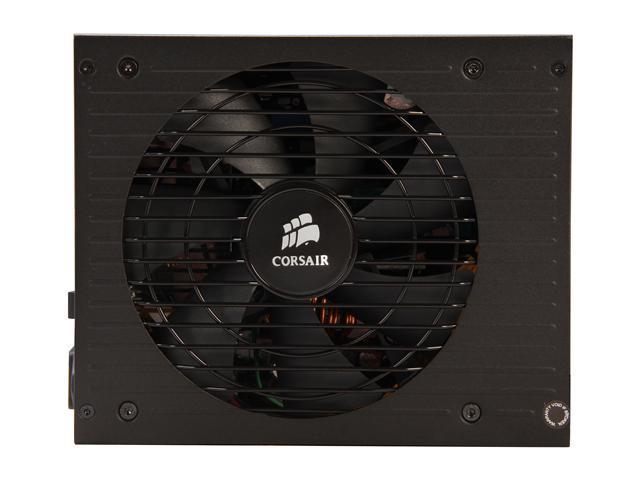 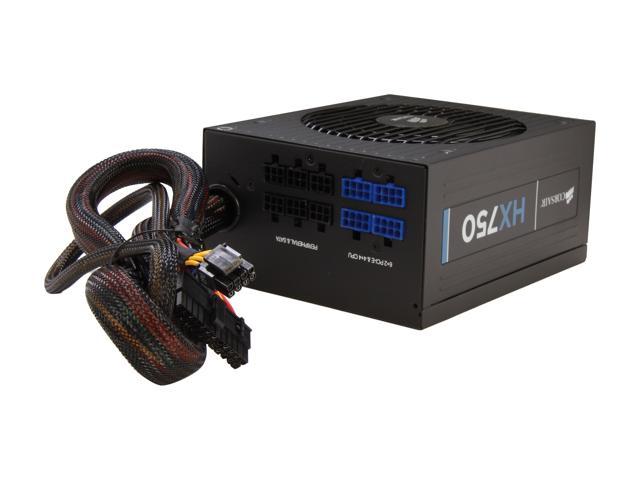 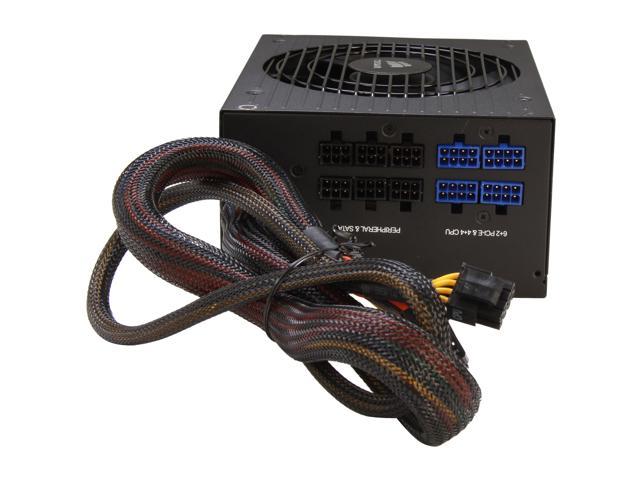 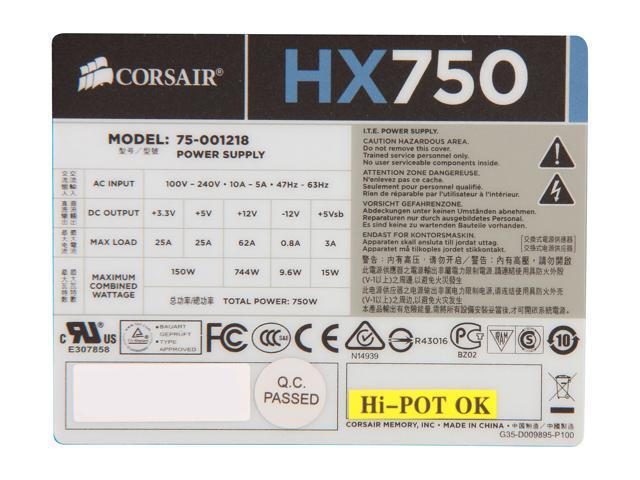 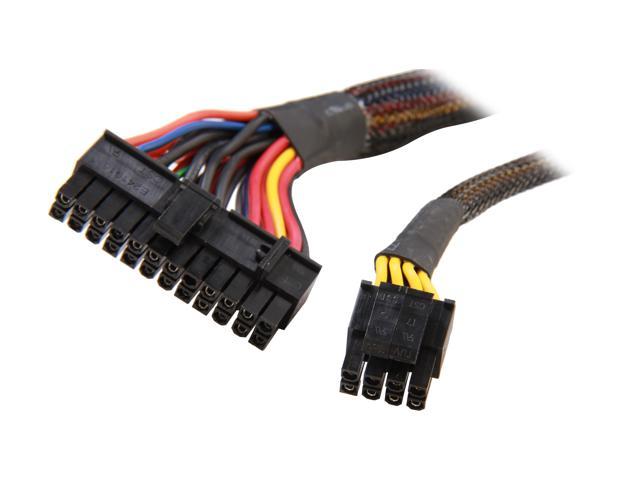 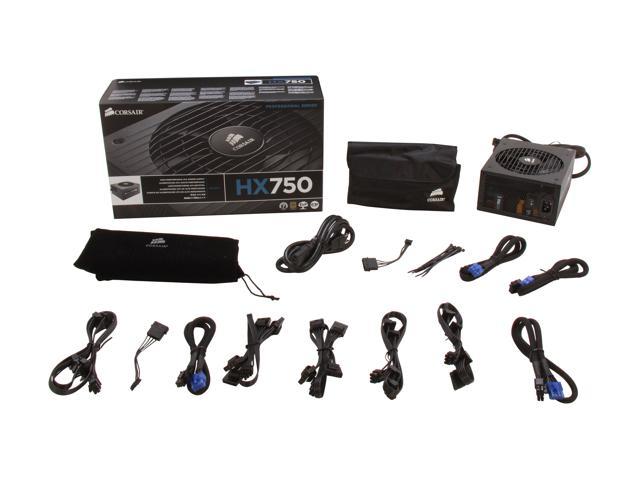 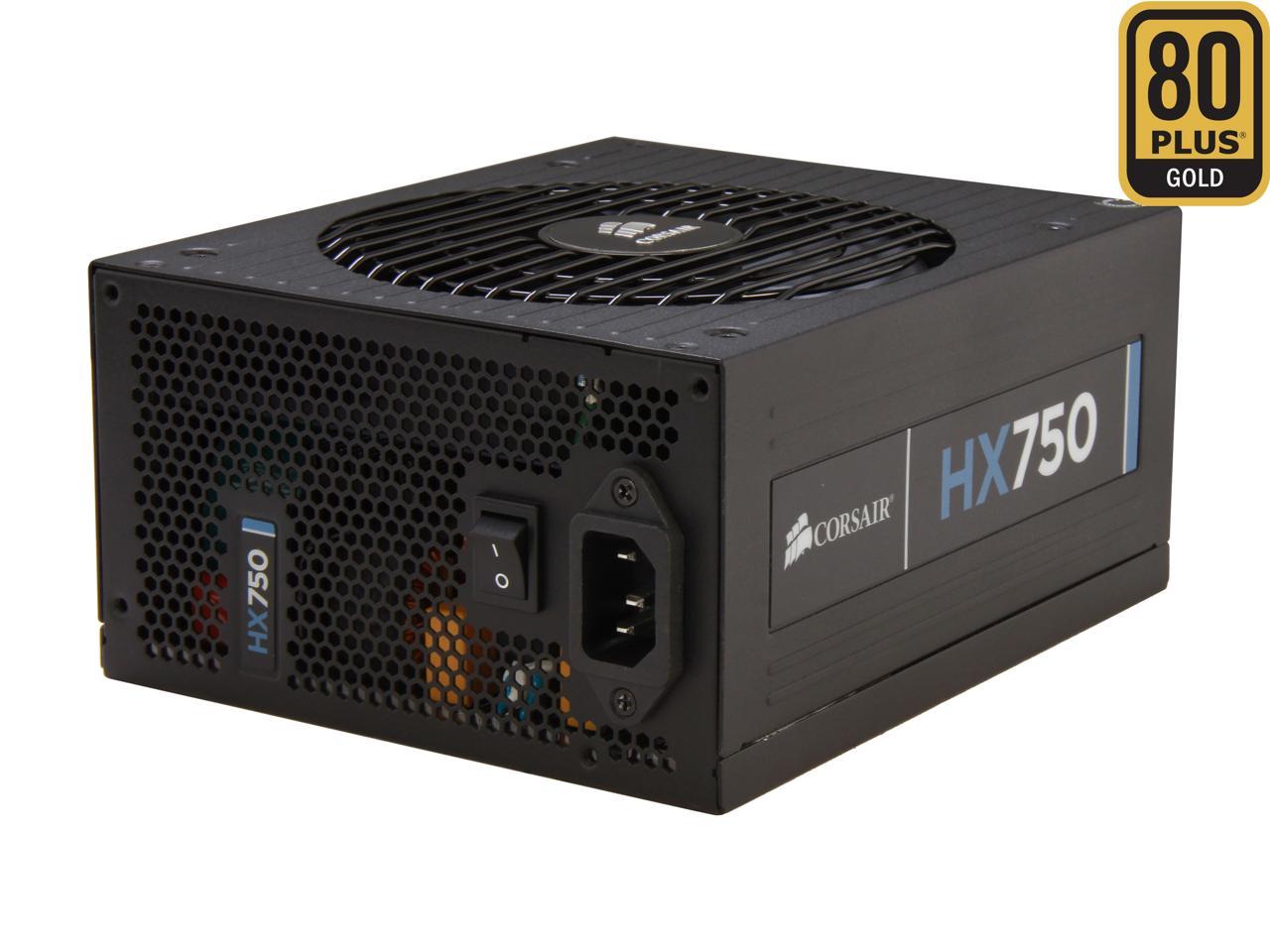 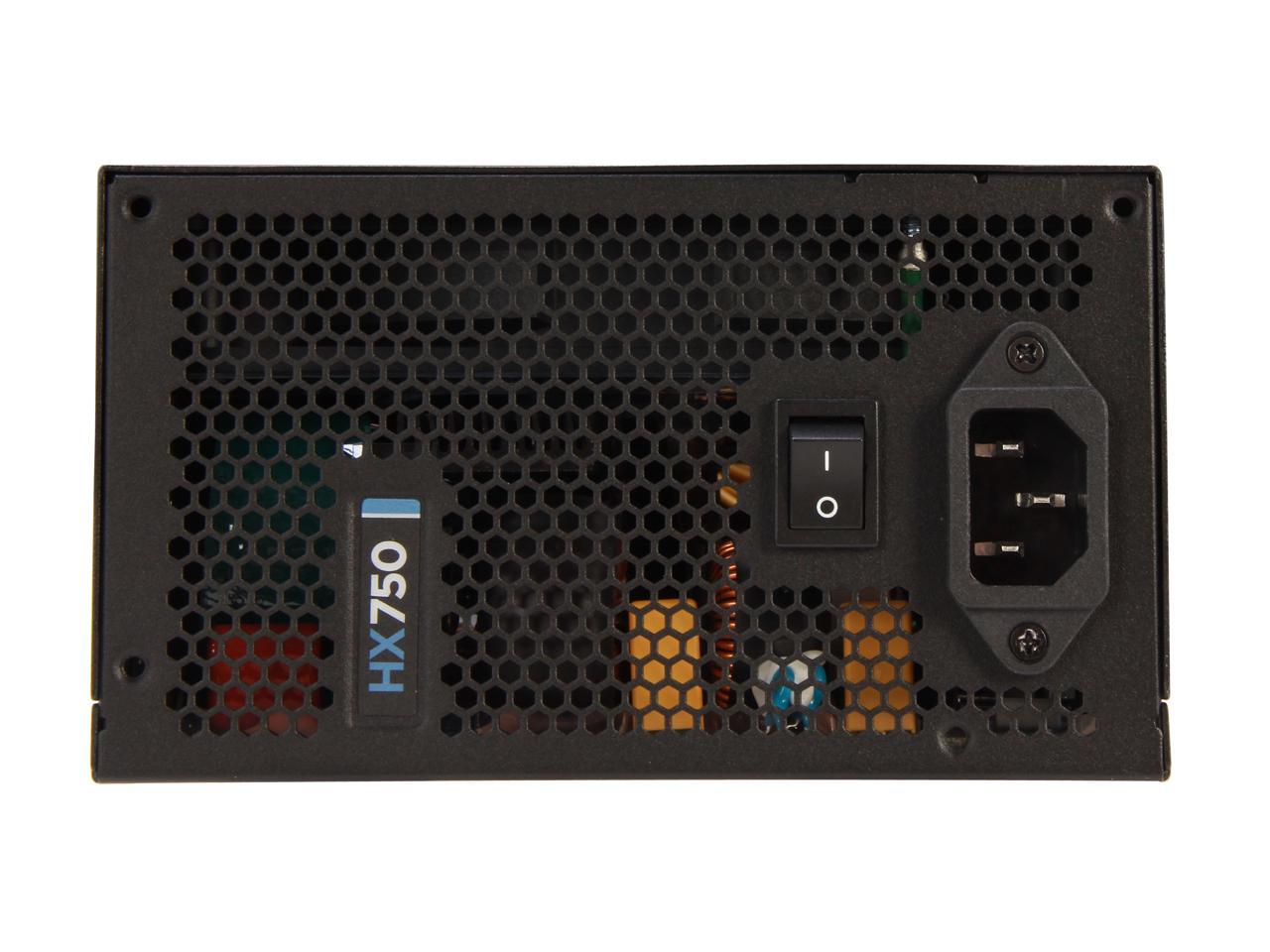 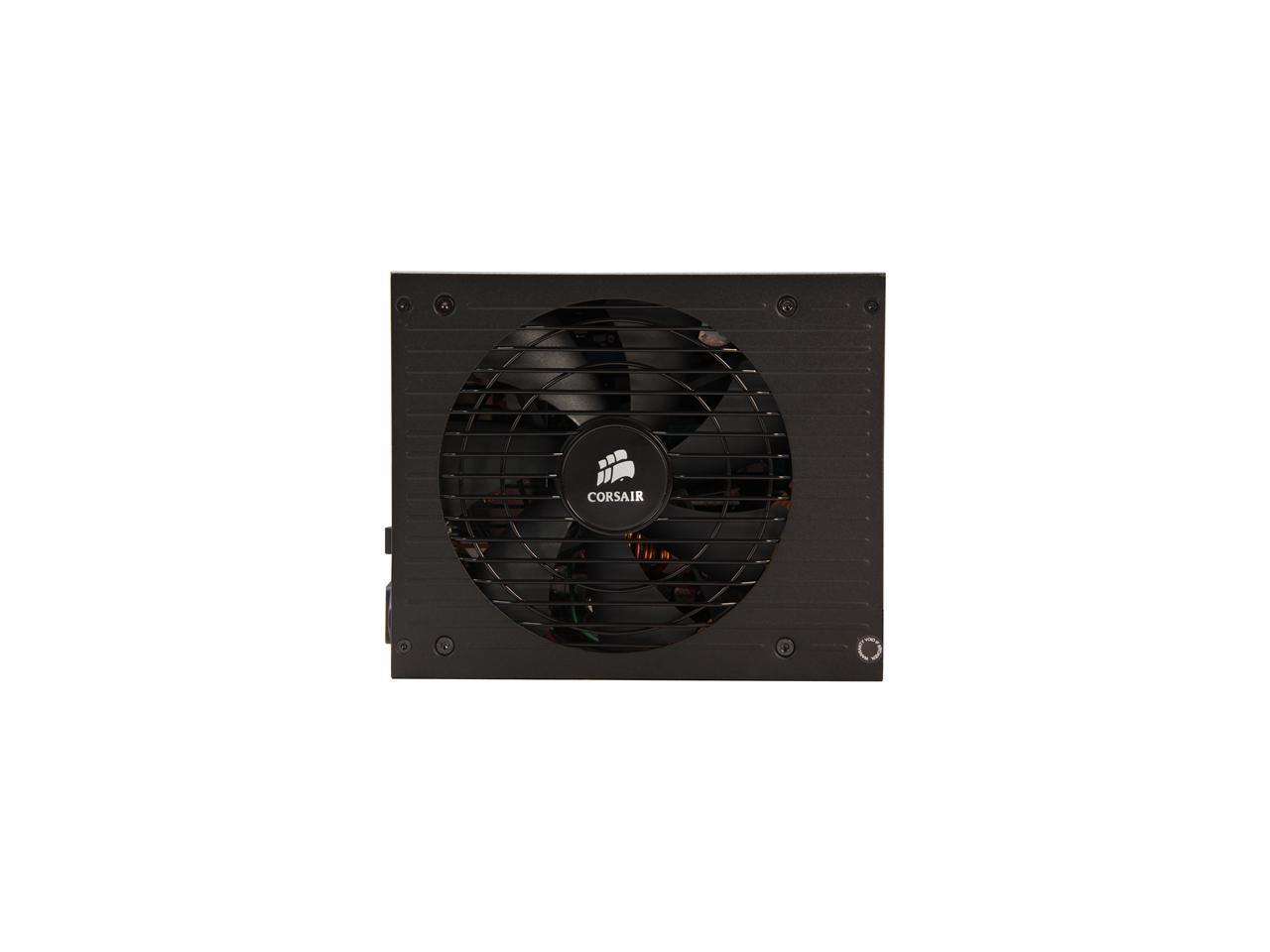 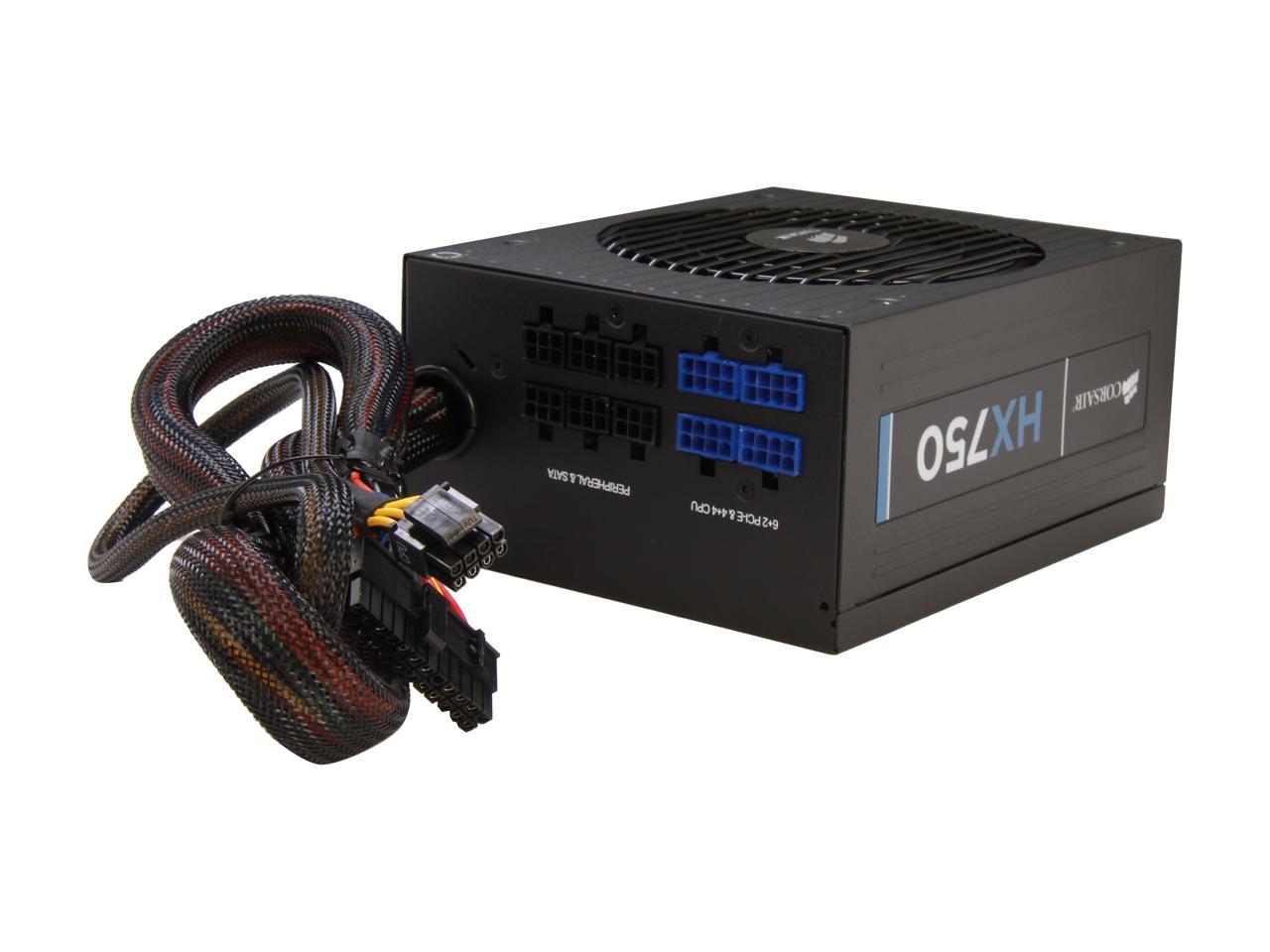 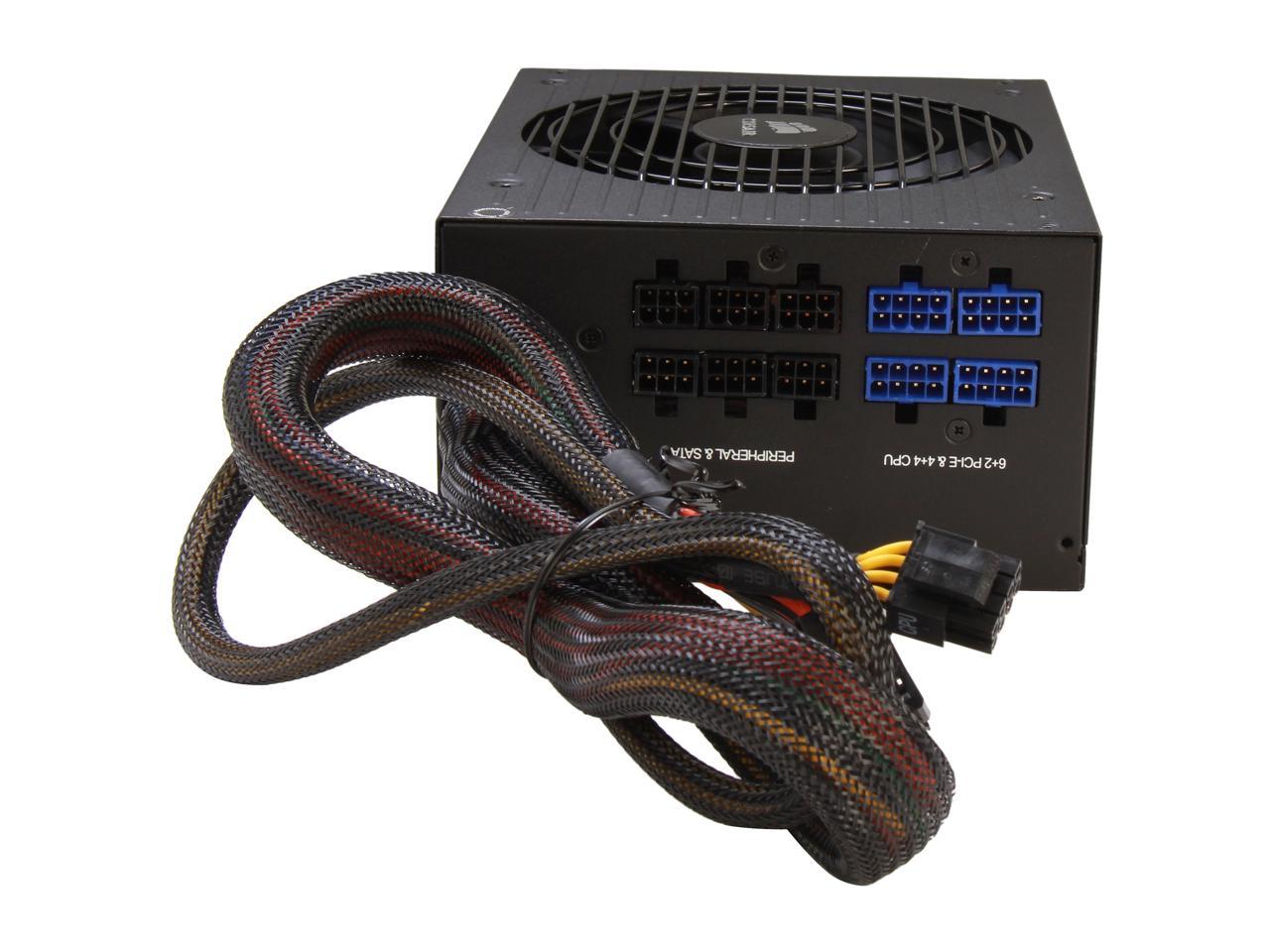 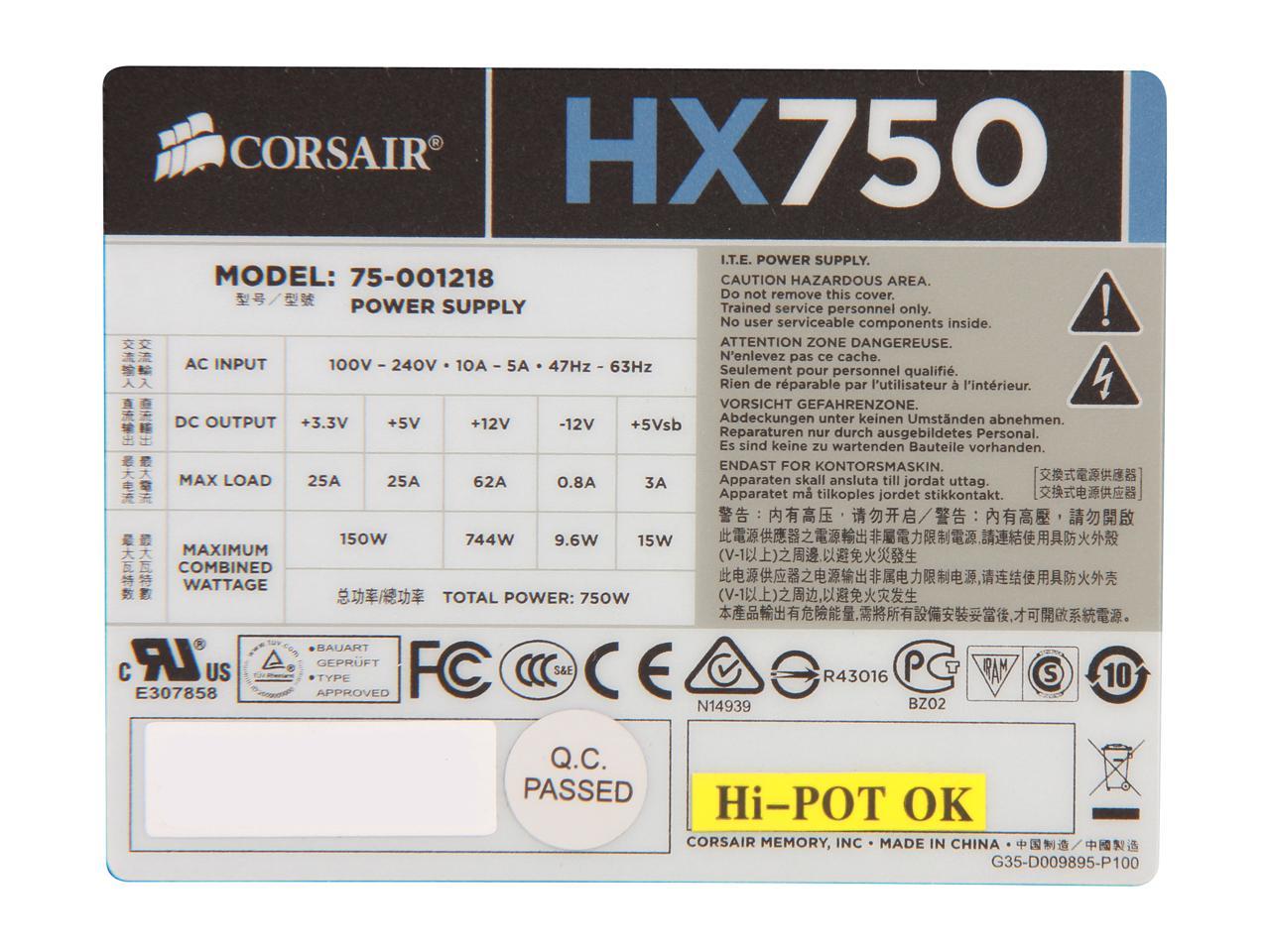 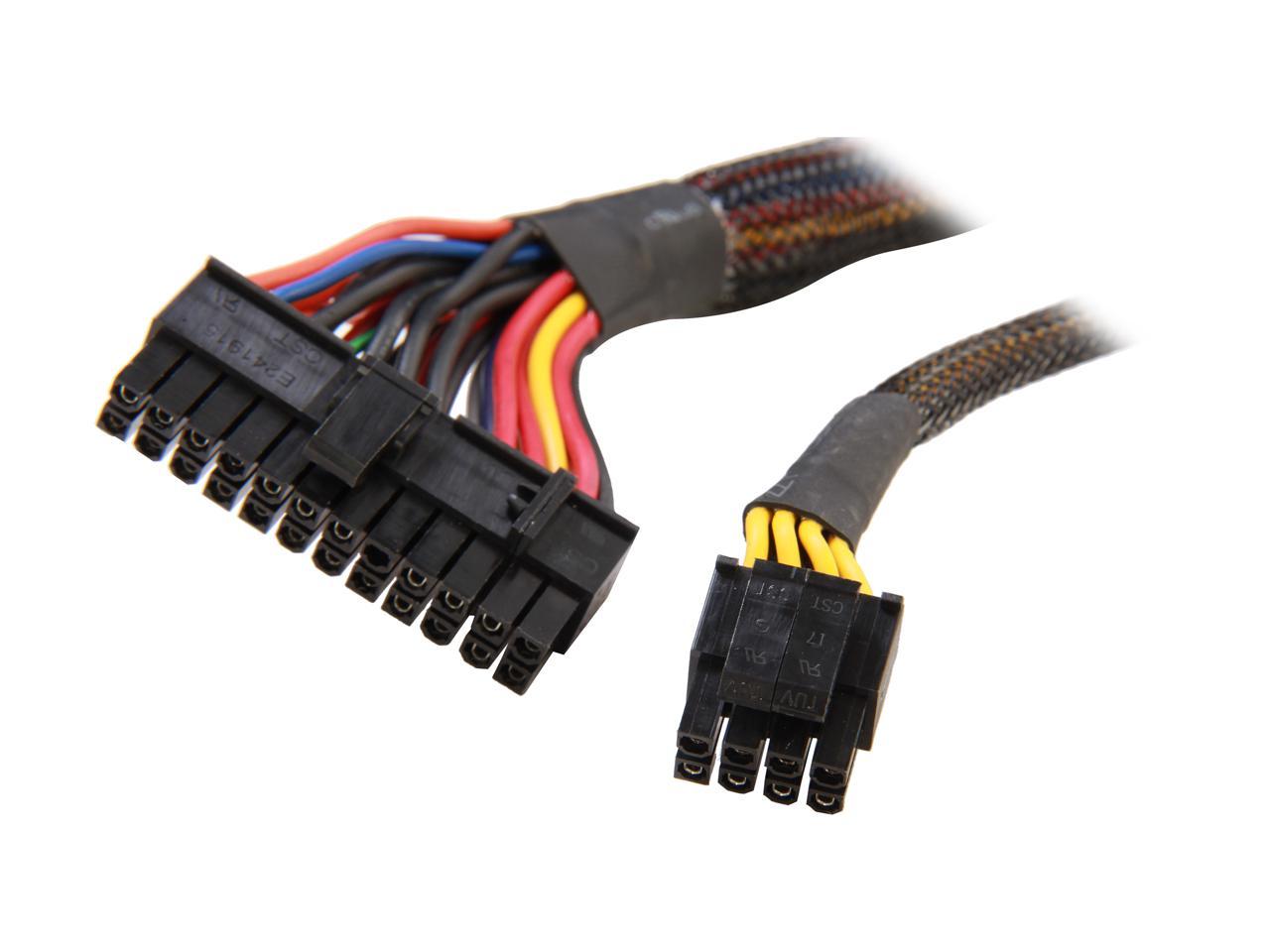 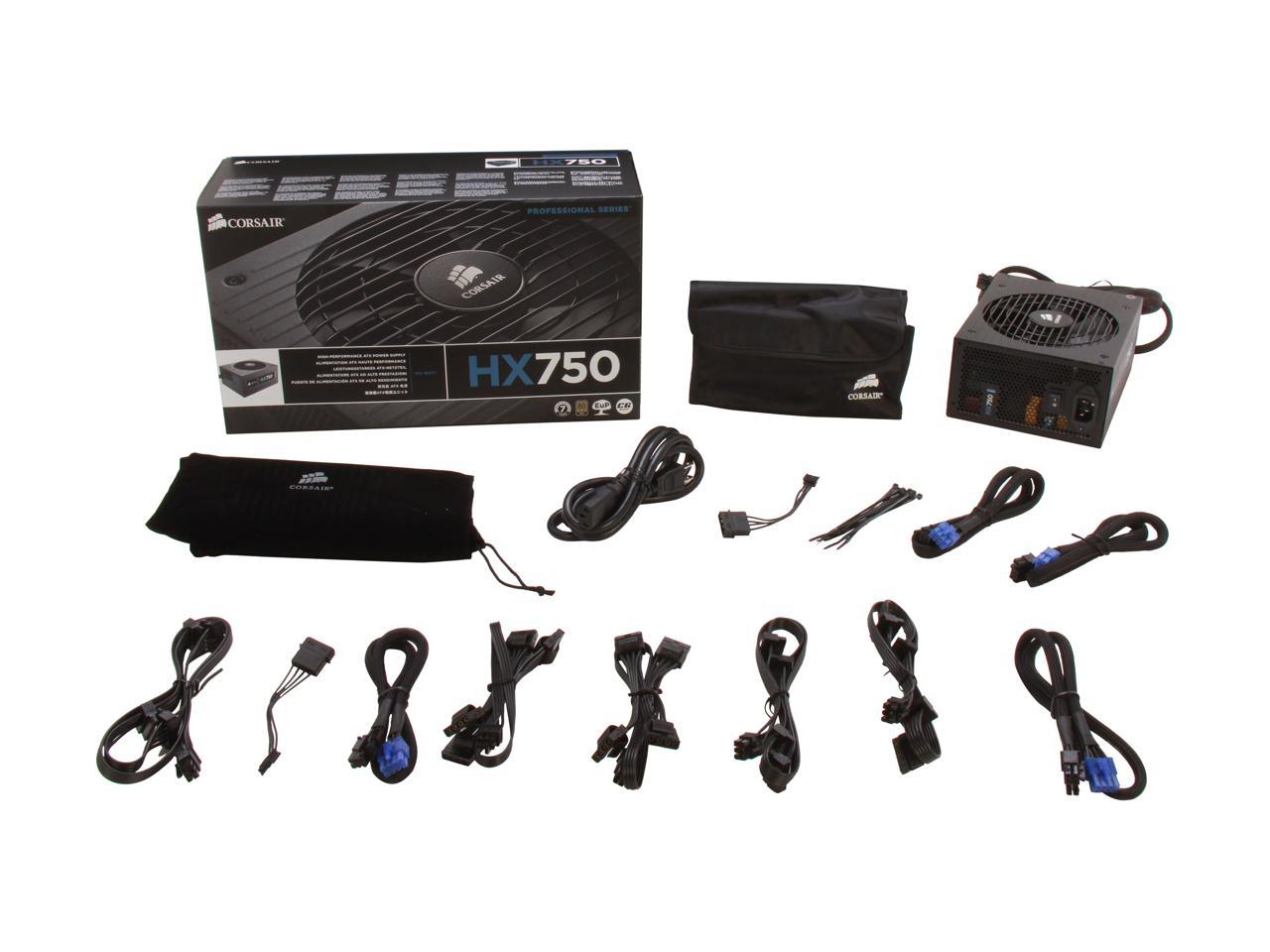 (1,306) Write a Review
OUT OF STOCK.
Overview
Specs
Reviews

Learn more about the Corsair HX750

Cons: As in previous review

Overall Review: PSU failed bad. Some caps went KA-BLEWY. Corsair honored warranty with NO problems. I sent the unit back in original box with all components (cost $25) Corsair concurred and have sent me a NEW replacement. A guy can't ask for more then that

1 out of 2 people found this review helpful. Did you?
Andrew K.
Ownership: more than 1 year

Pros: Beautifully built, as all Corsair products are. Everything, the casing, the cables, the connections, the comedy bag that the PSU comes in, all feel very high quality. I would hazard to say this PSU is the most reliable part in my whole system.

1 out of 2 people found this review helpful. Did you?
Michelle D.
Ownership: 1 month to 1 year

Cons: Non at all!

0 out of 1 people found this review helpful. Did you?
Noah F.
Ownership: 1 week to 1 month

Pros: It will work, for the application unlike mine.

Overall Review: For my setup, I unfortunately found out that I still need another 100Watts, danged PSU Calculators don't even acknowledge my CPU, of which Newegg doesn't even have an Out of Stock listing for it. It baffles my mind as if my CPU doesn't exist, but I am typing this right?

Pros: Since this is a 750 watt "Professional Series" PSU, it was with relief I saw the power load on my APC RS1500LCD drop 10-15% - improving runtime further at the UPS in the event of a power failure. I had replaced an Antec 650 Blue supply on an ASUS M2N32-SLI Wireless Deluxe that is loaded with multiple hard and optical drives, fans, and the ASUS EN9800 GTX Dark Knight video card. No slouch, this computer does use some serious power while running at 3.4 GHz in Quad processor form with 8 GB of RAM and multiple fans to keep it cool under Vista Ultimate X64. Don't get me wrong, as the Antec 650 Blue is a great PSU, but it is only 70% percent efficient compared to the over 80% provided by the Corsair 750HX - and it maxes out at 650W to the 750W of the 750HX. Some will say the 740HX is too much power supply for most systems - I will explain why it isn't, and why they are dead wrong. 1st - this is a Silver Certified Supply with a .99 correction factor holding power to specification.

Cons: continued.... Most power supplies only hold this to a .80 correction factor, and the better correction factor of the 750HX improves the life of your components. Next - there is the efficiency rating. Power supplies run anywhere from 70%-90% efficient. The lower that number, the more power is wasted to heat - heat that then has to be blown away from the PSU. This means your cash is trickling away with power your computer isn't using - and that airconditioned room your in is having to work harder at keeping you and your computer cool. Now - why a 750W power supply isn't too big. Power supplies are rated according to the temperature ranges they experience. That can mean your power isn't as good as you thought it was as you approach those limits. Most experienced builders try to keep requirements on PSUs under 50% just so the supplies will run cooler. This means a quiet supply like the 750HX will often have its fan running slower and quieter. This also extends the life of the PSU.

Overall Review: continued... Yes, you might have seen your power use at idle was only 190-200 watts - but did you know that can quickly double in use, like while gaming or running some softwares? Well, that just took your maximum need from 200 to 400 watts - or just over half the maximum rating of the 750HX. Starting to see where this is going? With higher power use, all supplies run warmer - when they get too warm, they first get loud at the fan, then they start making an odor, and then eventually they go fizzle or pop. You also might not notice until your motherboard and other components went south with the PSU. If I add another video card for SLI, the 750HX also supplies two more dedicated PCIe power connections for a total of four - my 650 Blue couldn't do that - and most smaller supplies than the 750HX can't either. A seven year warranty. At any rate, just think about how much you value what you've paid for, those additional dollars for a better quality PSU can and will save cash.

Pros: So this power supply worked great for 11 months. It powered 3 hard drives and a SSD drive. Plus my water cooling pump, SLI, two Blue-ray drives and a four-core CPU with HT that was over clocked. It ran 24/7. Corsair's 7 year warranty and they stand behind their product. I bought Corsair because I was sick of buying bad power supplies and I made the right choice.

Cons: It stopped working after 11 months. I think it was a storm that blow the power supply.

Overall Review: I called Corsair and got a real person within 1 min and he spoke clean English. I sent the power supply back and they sent a brand new one within a week (during X-MAS). Great company great power supply.

Cons: Had to RMA it. Please see "Other Comments"

Overall Review: In my review from 10/22/2013, I stated that this PSU fried my HDD and DVD drive. It turns out I'm an idiot. This PSU did, in fact, fail, and I had to RMA it, but, when I replaced it with a new ThermalTake PSU, I had left one of the Corsair SATA power cables in my computer, which I used to hook up my HDD and DVD drive. YOU CANNOT MIX AND MATCH MODULAR PSU CABLES FROM DIFFERENT MODELS OR BRANDS!!! The plastic tips will fit, but the pinouts are different and you will get the wrong voltages going to your components, which will probably destroy them. Only use the cables that came with that specific modular PSU. Please don't make the same stupid, expensive mistake I did. Something as simple as this cost me about $180 in hardware.

Pros: This is a follow up to "This is not the power supply you will be getting" I have installed the unit, works well so far but is is most definately not a (CMPSU-750HX) power supply. This unit is a new model (CP-9020031-NA) The details page show the old unit at the top and the model you will receive further down the page. All of the product tour pictures are the old model and the details page is a mix of both units. If you go to the link to the manufacturer's product page you will not be getting the professional series HX750 powers supply shown. You will receive the HX750 series.

Cons: The problem here is partially Corsair's fault. They make a Professional HX750 PSU (80+silver SKU CMPSU-750HX) and now an HX series HX750 PSU (80+ gold SKU CP-9020031-NA). I don't know if the new HX gold model is going to replace the professional series model or not. You can find the model you will receive if you go to Corsair site and select Products, Power Supply Units, HX series. When a company knowingly offers you a product under a SKU and supplies you with another model SKU, this is called consumer fraud and is illegal. I have informed Newegg and you can look at my earlier post. Newegg chooses not to correct this. Another user before me pointed out the problem of the gold vs silver certification and 3 of 3 users did not find this info helpfull.

Overall Review: I do not think anyone should buy this power supply until Newegg gets it correct. If you look at the HX750 and HX1050 now being sold at Newegg, in the description, they have lost the "Professional Series" tag and list it as an "HX series" no more SKU shown and both are the new gold certified model. The reviews are lumped in with the older Professional model. The HX650 is still showing the "Professional series" and SKU in the description. All 4 models show links to the Professional series models and are incorrect. Surprised to find none of the buyers looking for a professional series power supply and rate themselves as highly knoledgeable have not bothered to check into, reveal the problem and ask Newegg to stop misrepresenting what they are selling.

19 out of 19 people found this review helpful. Did you?
Manufacturer Response:
Dear Customer, We’re deeply sorry for the mix up, our HX1050, HX850, and HX750 have recently upgraded to Gold Certification. We have investigated the issue and it is now resolved. As of today, the Silver certified units will no longer be shipped. If you have purchased a Gold Certified HX series PSU- but received a Silver Certified power supply, please contact Newegg to receive the appropriate PSU. Thank you, Corsair Customer Support