FREE SHIPPING
Sold by: Newegg
Shipped by Newegg
Newegg’s gift-wrap service is the ideal solution for making your gift special! Select your item as a gift, then add your message. Your gift will also be discreet with no prices being included on the packing slip.
Price Alert
Add To Wish ListFound on 450 wish lists 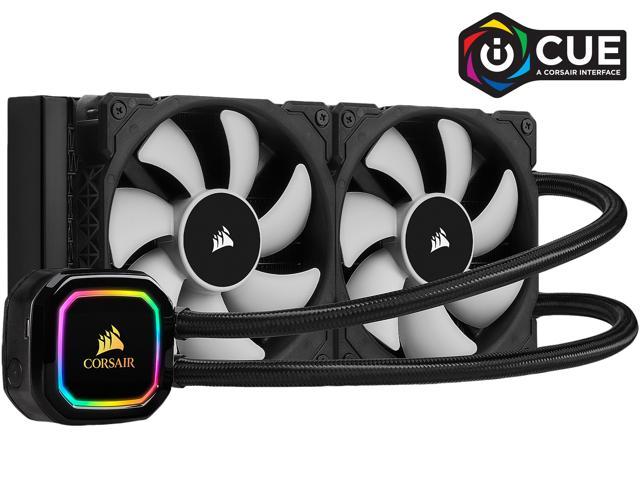 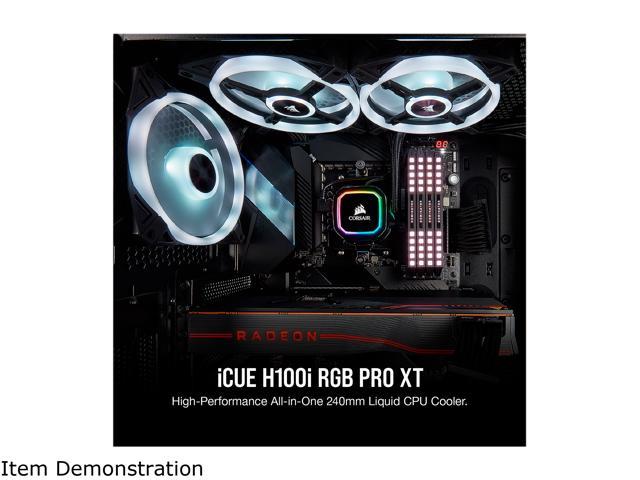 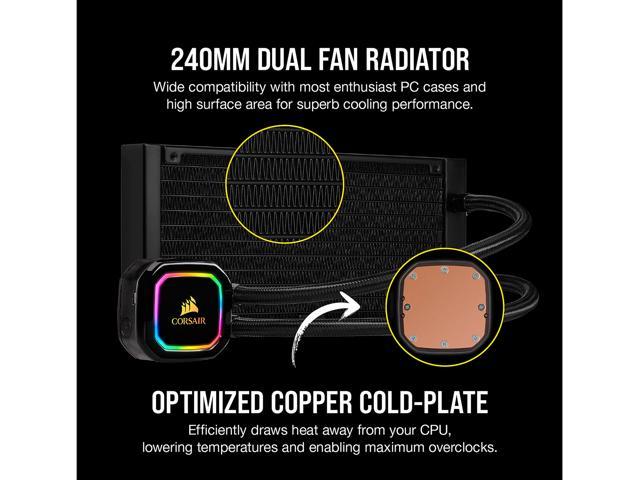 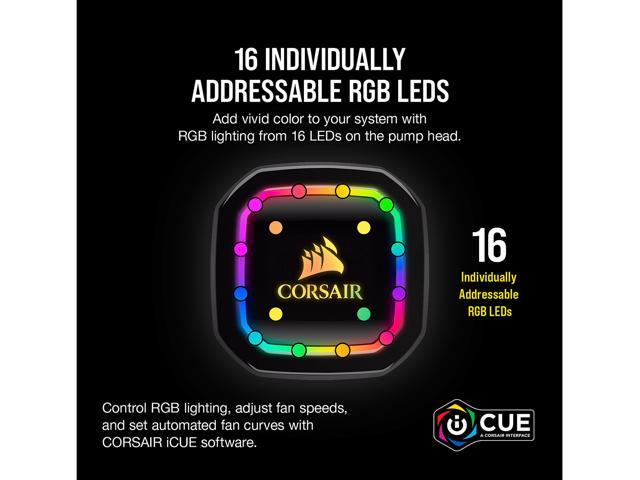 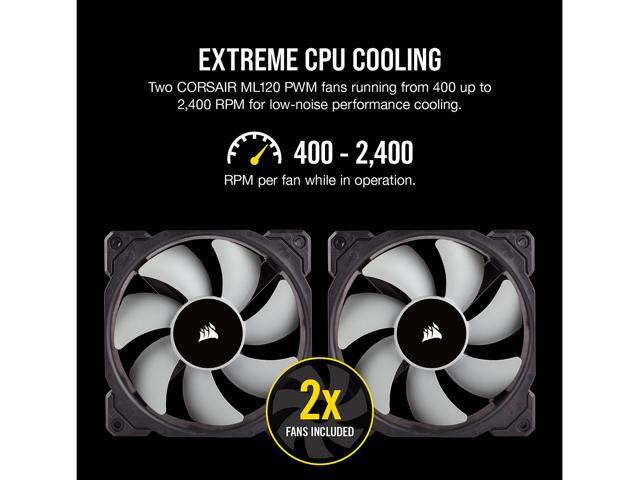 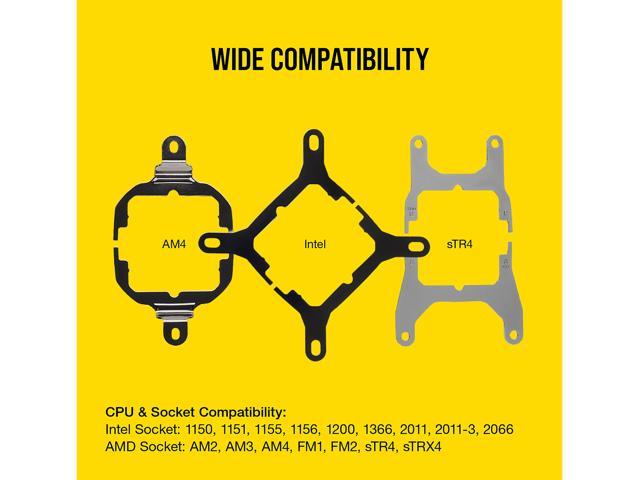 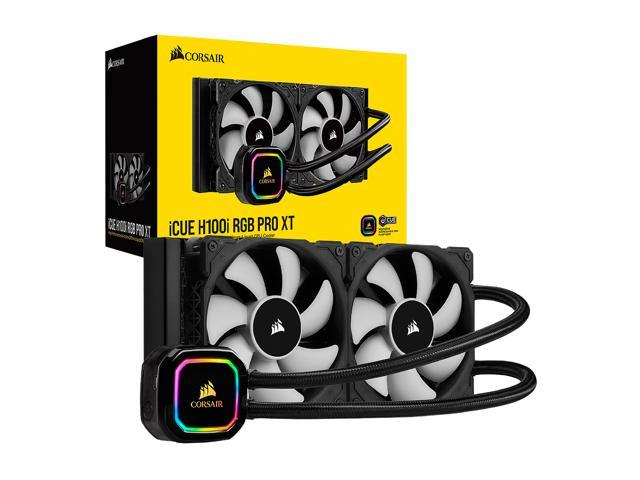 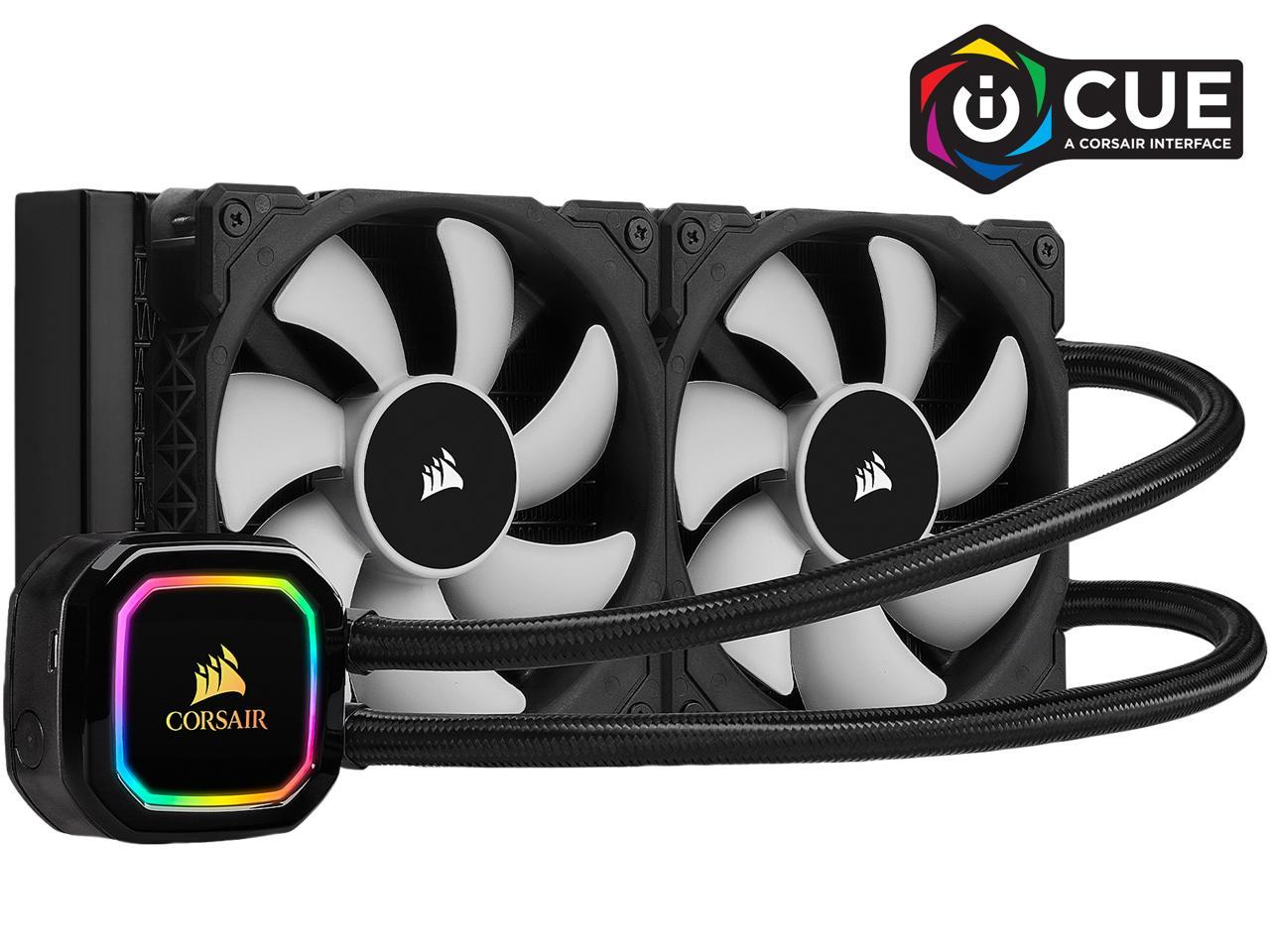 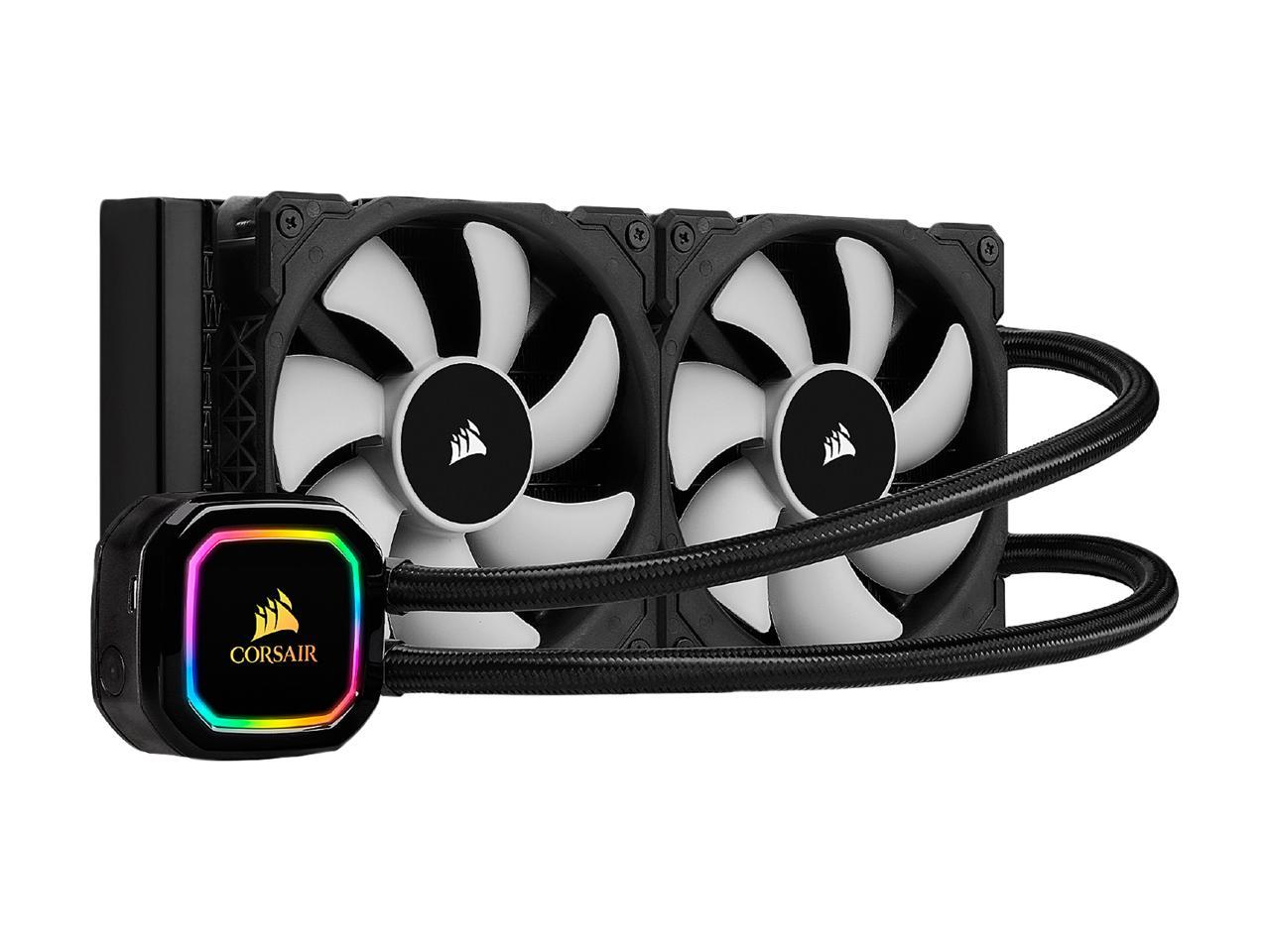 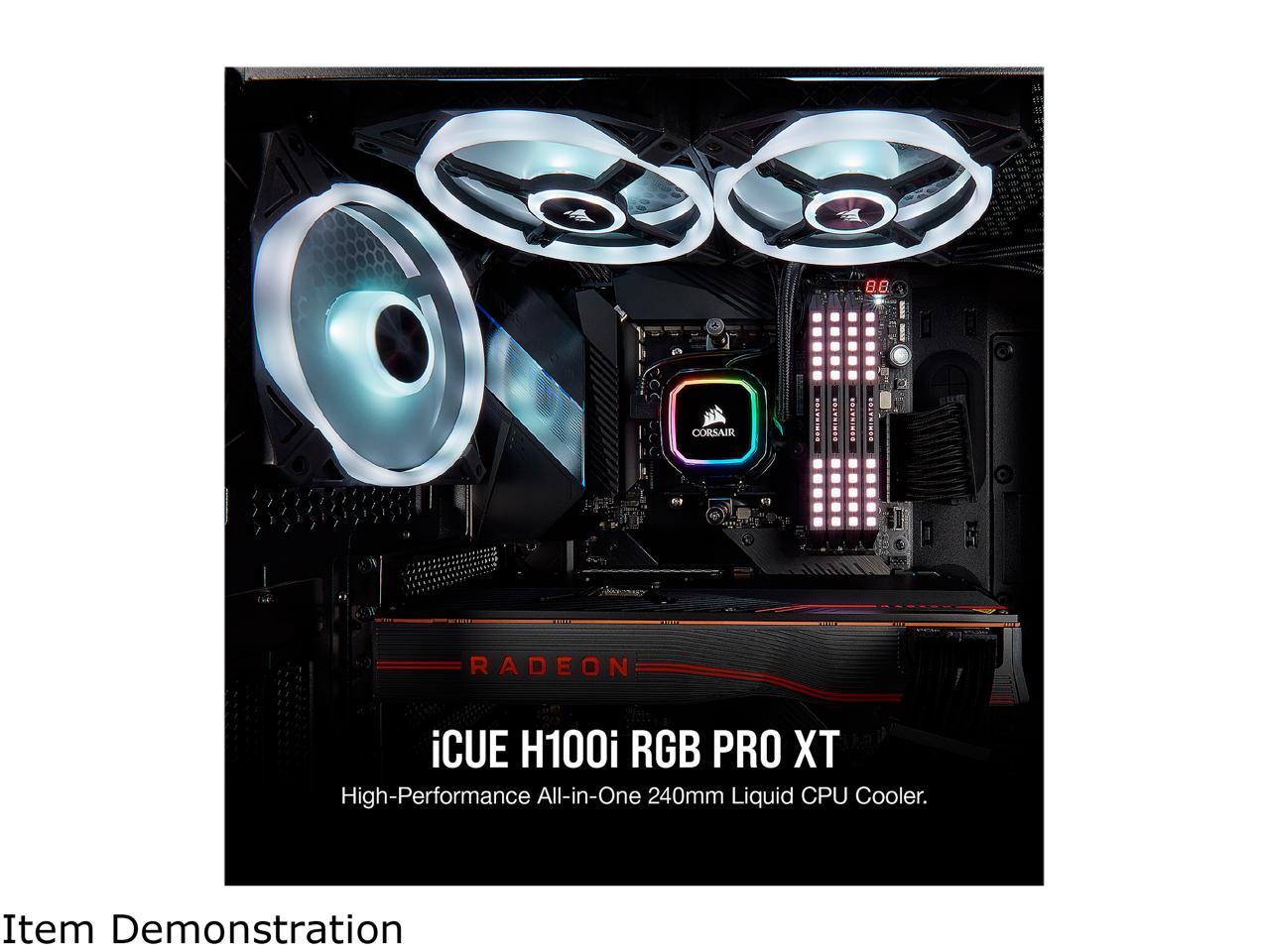 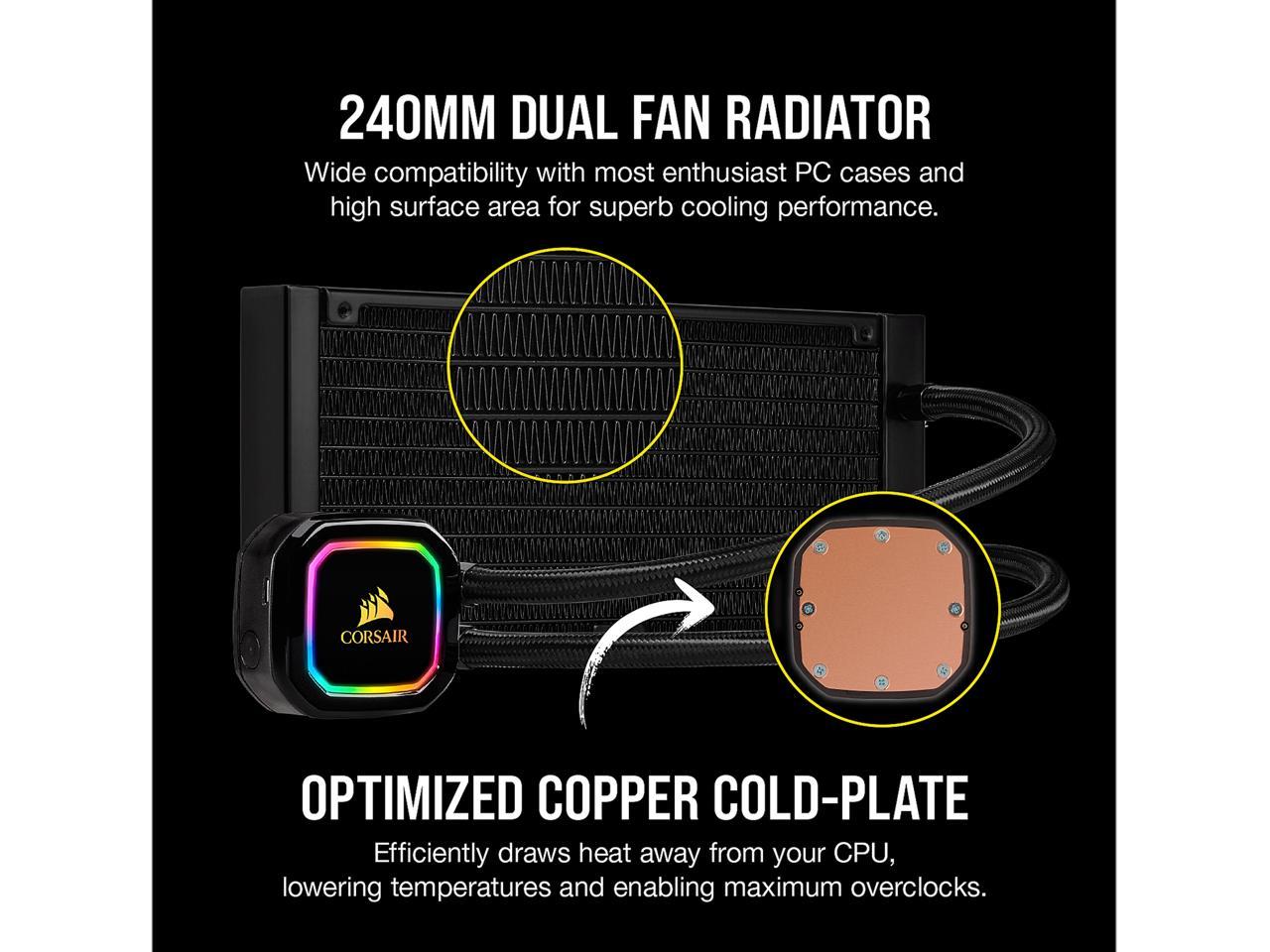 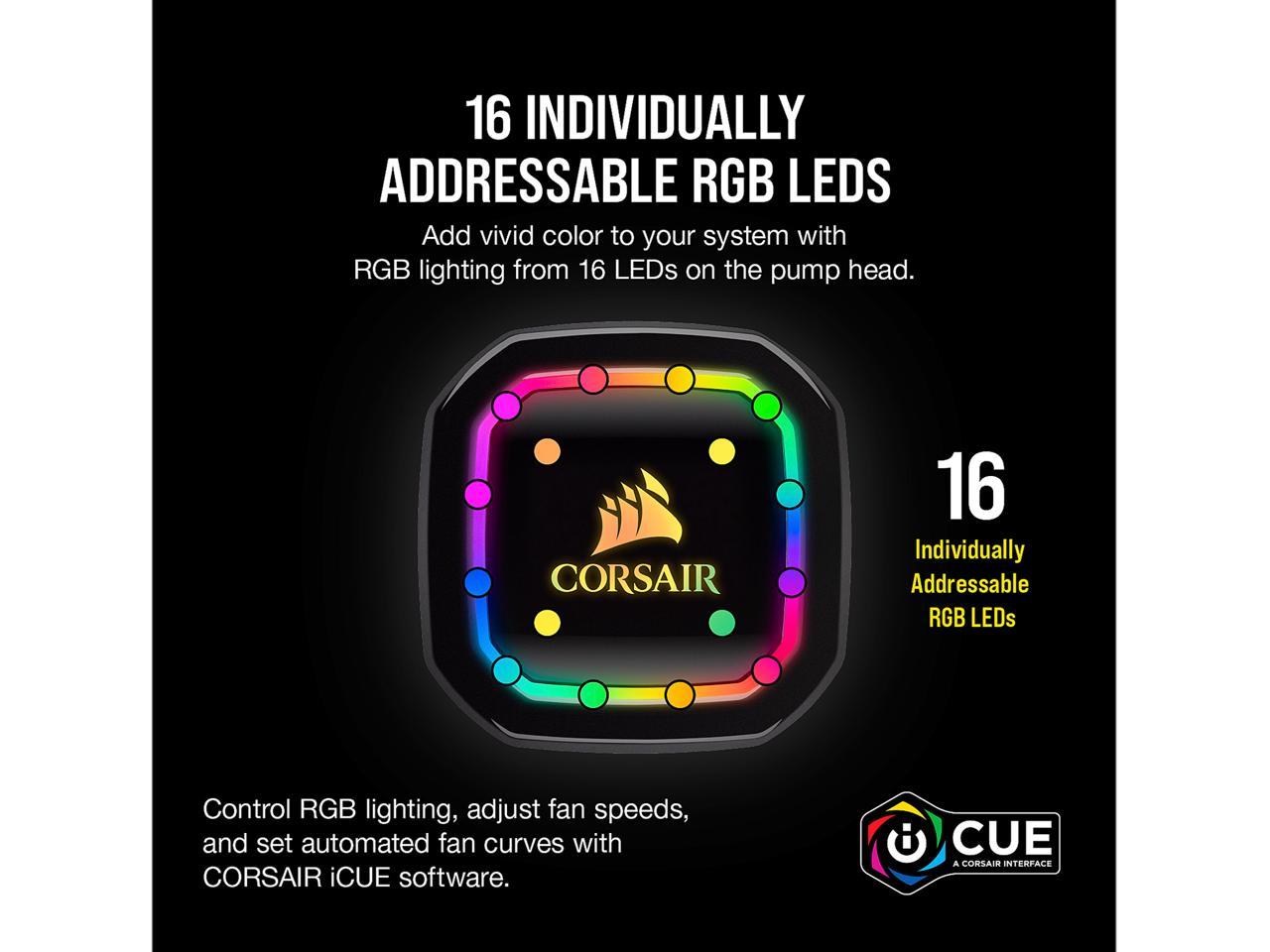 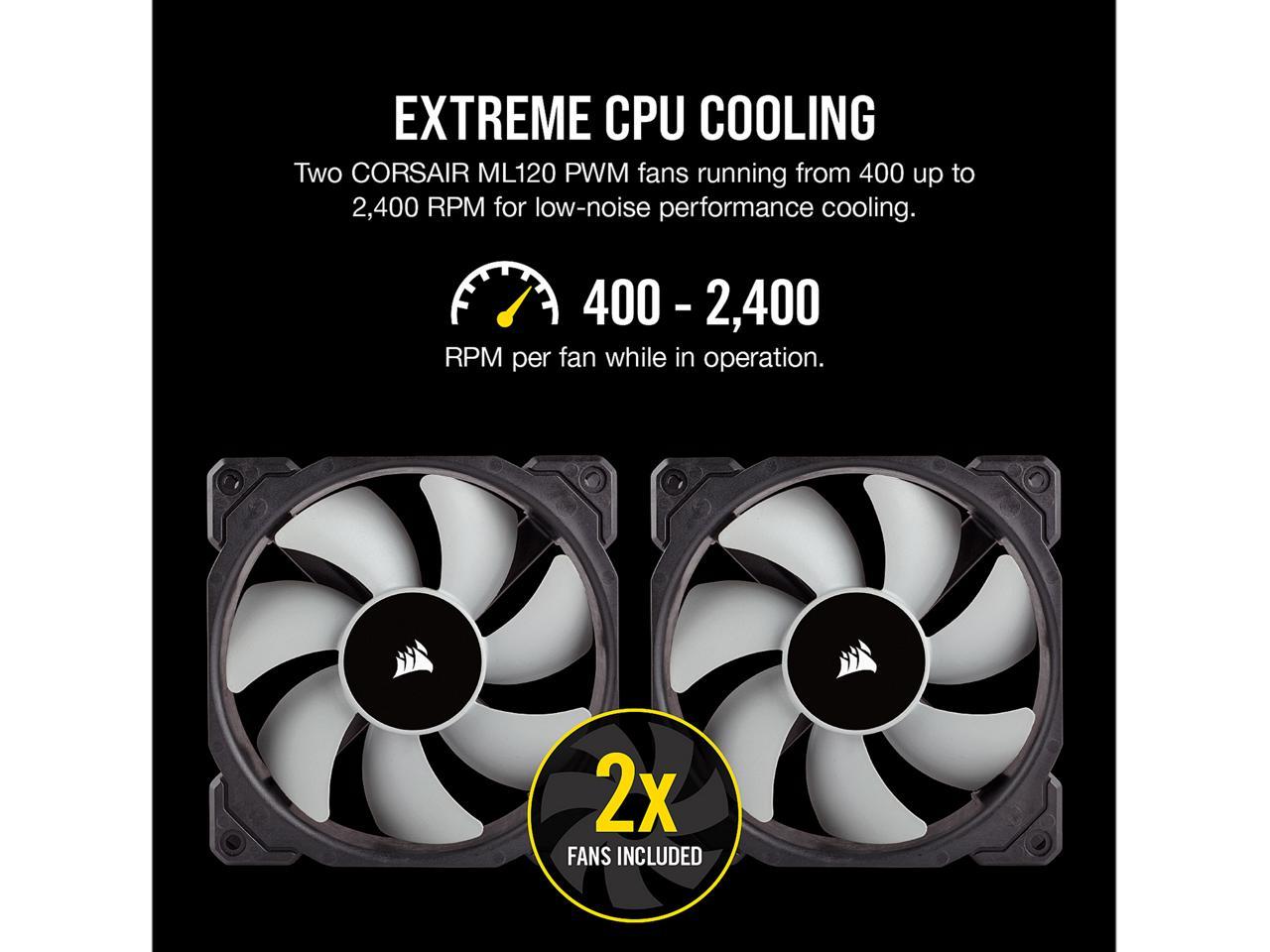 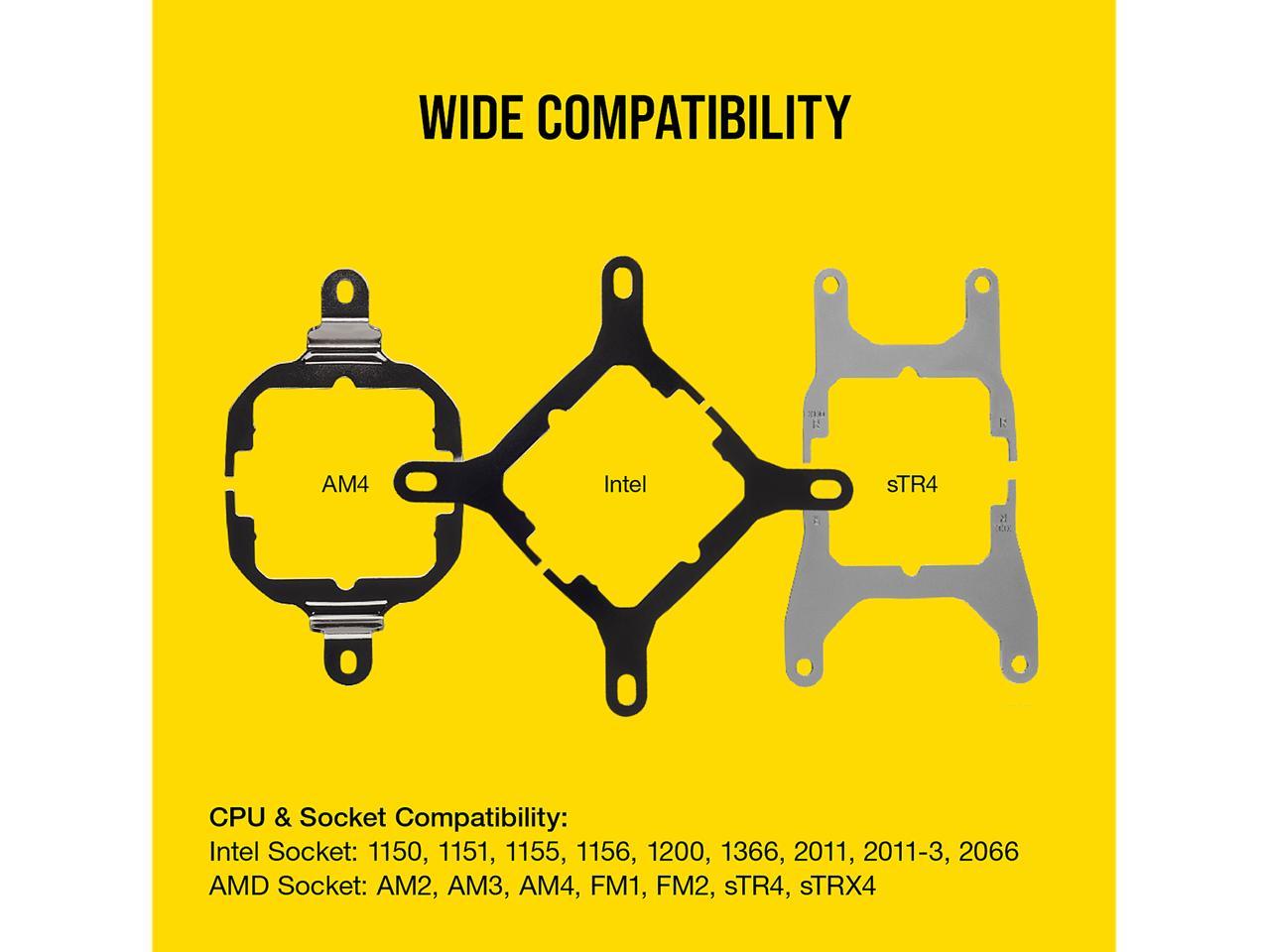 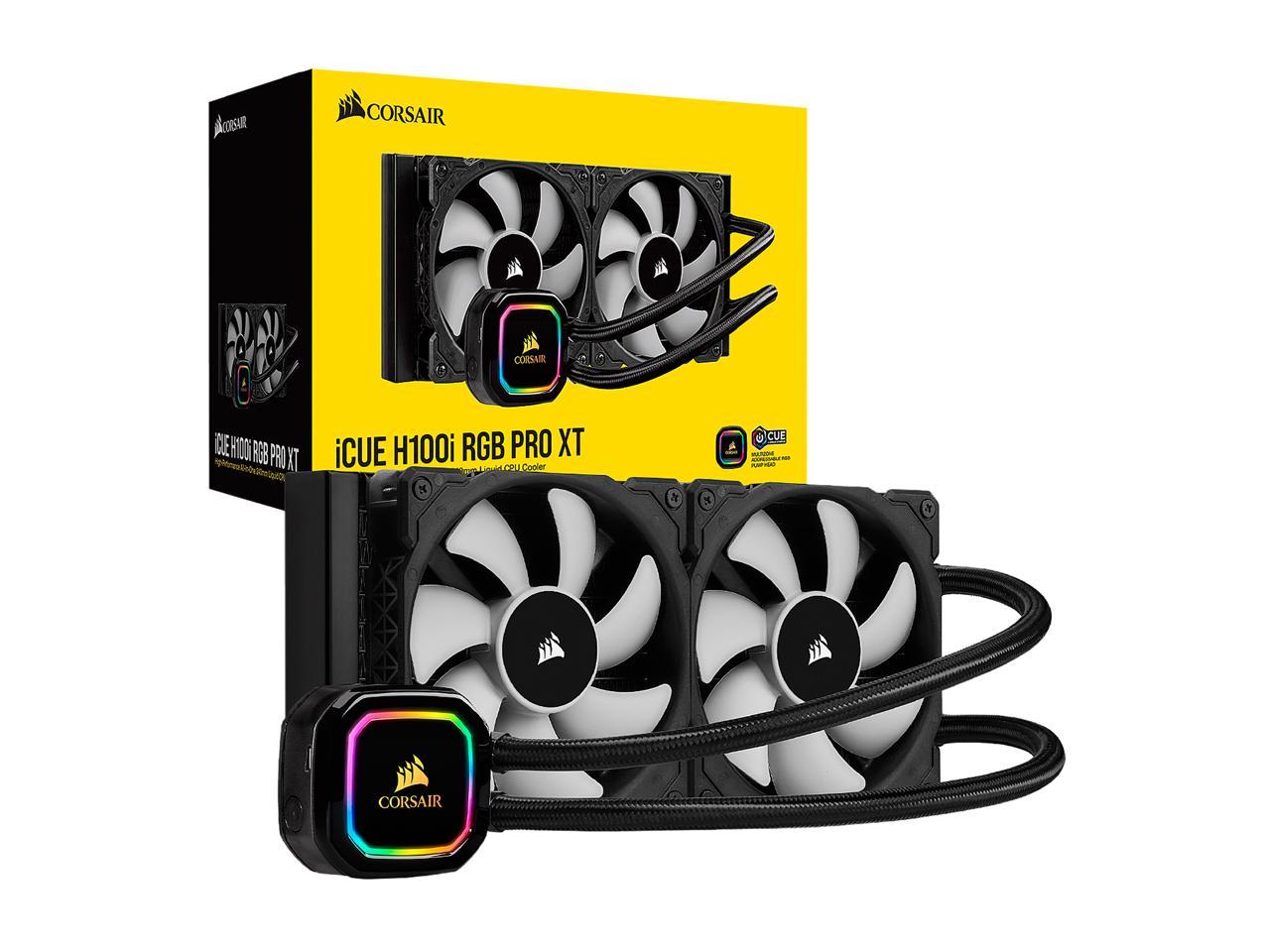 Cons: -Dropping an egg because I feel like the wiring harness could be streamlined. Having 3 different wires come out from the pump seems silly, and makes cable management a bit of a pain.

Overall Review: I swapped my Noctua NH-D15S for this, I wasn't expecting to get much better performance and I really didn't. I mostly did it for aesthetic reasons. The massive air cooler was such an eyesore. This cleans up any build. I haven't run any benchmarks, but speaking anecdotally, I'd say this performs just as well as Noctua's (fantastic) chungus air coolers, maybe a little better. During gaming sessions on my i9-9900k, I was heatsoaked around the low 50s, a little better than the Noctua at the mid 50s. Overall very happy with it, especially into my first foray into water cooling. Side notes: 1.) Once this is installed for the first time *or* after you move your PC, you might want to jiggle your PC a little after it's been turned on to clear any bubbles that might've found their way to the pump. 2.) One thing that the installation guide doesn't tell you when you're installing on an Intel socket, the back brace doesn't cinch up onto the mobo and is a little loose. I was worried about this, before learning that once you seat the pump to the CPU, that looseness goes away.

Overall Review: Great instructions so its not bad too install, quality build with amazing RGB and core temperatures. My stock i9-9900k is running idle at 35C in a 22C room temp. Highest temps at 60C. Also easy to control through iCUE.

4 out of 4 people found this review helpful. Did you?
Angry Scientist
Ownership: 1 week to 1 month
Verified Owner
Tricky install but fantastic cooling11/28/2020 1:27:54 PM

Pros: - Keeps my 5800X at 60C during 4.95GhZ clocks - Looks cool - Quiet fans for the most part - Even with my mistake during the install, it works beautifully (see other thoughts)

Cons: - This was my first build with an all-in-one liquid cooler, so it was a bit tricky to install (this mainly stems from the fact that everything is connected in the box, and the cover on the CPU contact portion does NOT like to stay on, leading to much caution to prevent smearing the thermal paste) - Make sure your case has an ability to mount it (my CM HAF X could mount it on top with screws, but not the recommended number of screws by Corsair)

Overall Review: I initially installed the CPU pump head upside down (likely not a functional problem, just visual), so I removed it and flipped the orientation. You don't have a lot of mounting configurations possible, depending on the case you're using. During this reconfig, I obviously smeared some of the thermal paste. However, it didn't seem to make a difference in the end, and my CPU is hitting far higher clocks than I expected, and still staying at 60C. Fantastic cooling.

Cons: The only thing, missing rgb fans ? but at this price its ok.

Overall Review: If you are on a budget. go for it !

Overall Review: Purchased this as an upgrade from my Corsair H60 when it was unable to keep my CPU cool when attempting stable overclocks. Before my temps were well over 70 and even 80c under load, 40-45c at idle. Now they are low 30s at idle and between 60-70 under load (Escape from Tarkov and COD: Warzone @ Ultra-ish). It was simple to setup since it mounted exactly like my old cooler. Other reviews mentioned excessive cables leading to poor cable management but I did not seem to have that issue. My standards of cable management may also not be as stringent. My only complaints are the noise and iCUE interface (the latter not really being a unique issue of this product rather than an entirely different entity of it's own). I have never had fans in my tower that I could hear over my headset during gaming but when set to max those things become very audible. I currently have it set up as an exhaust at the front of my tower (an accident as I meant it be an intake but the symbols on the fans themselves don't seem to be correct) and plan to change them to an intake so they may be a touch quieter after that. Overall, would recommend if you are trying to overclock and want a bit of flair to fit your corsair setup.

Cons: Screw compatibility with the case is poor for mounting the heat sink itself.. would have preferred the ability to connect more screws.

Overall Review: Worth it

Cons: little tricky to install on AM4 Socket.

Overall Review: I would definitely recommend this again.