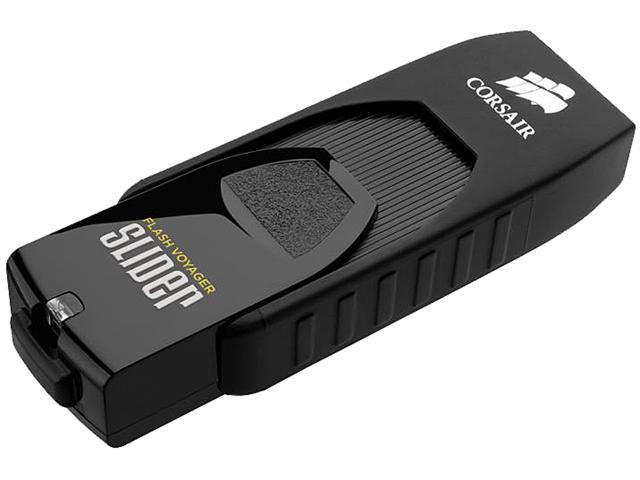 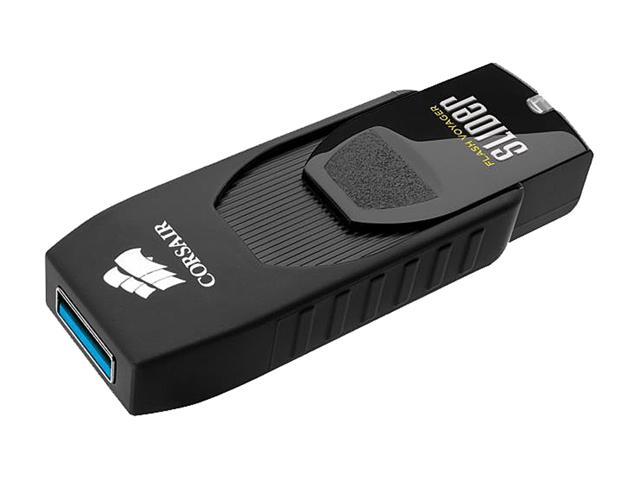 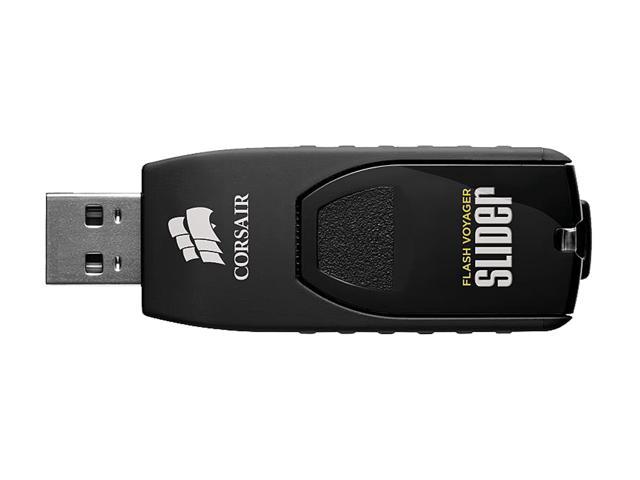 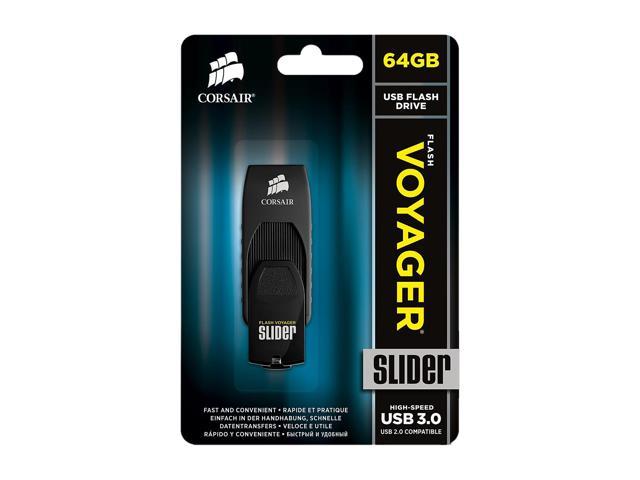 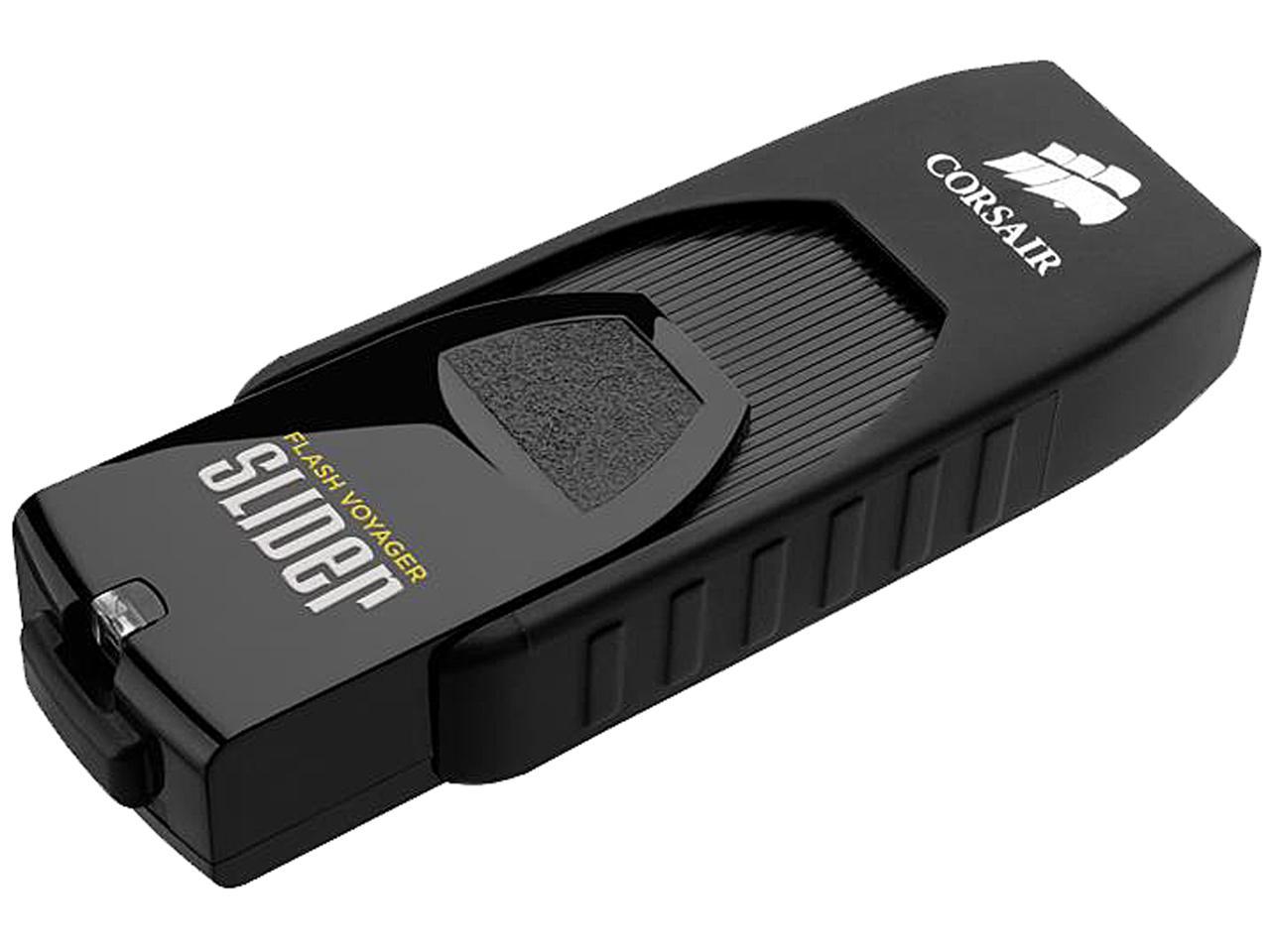 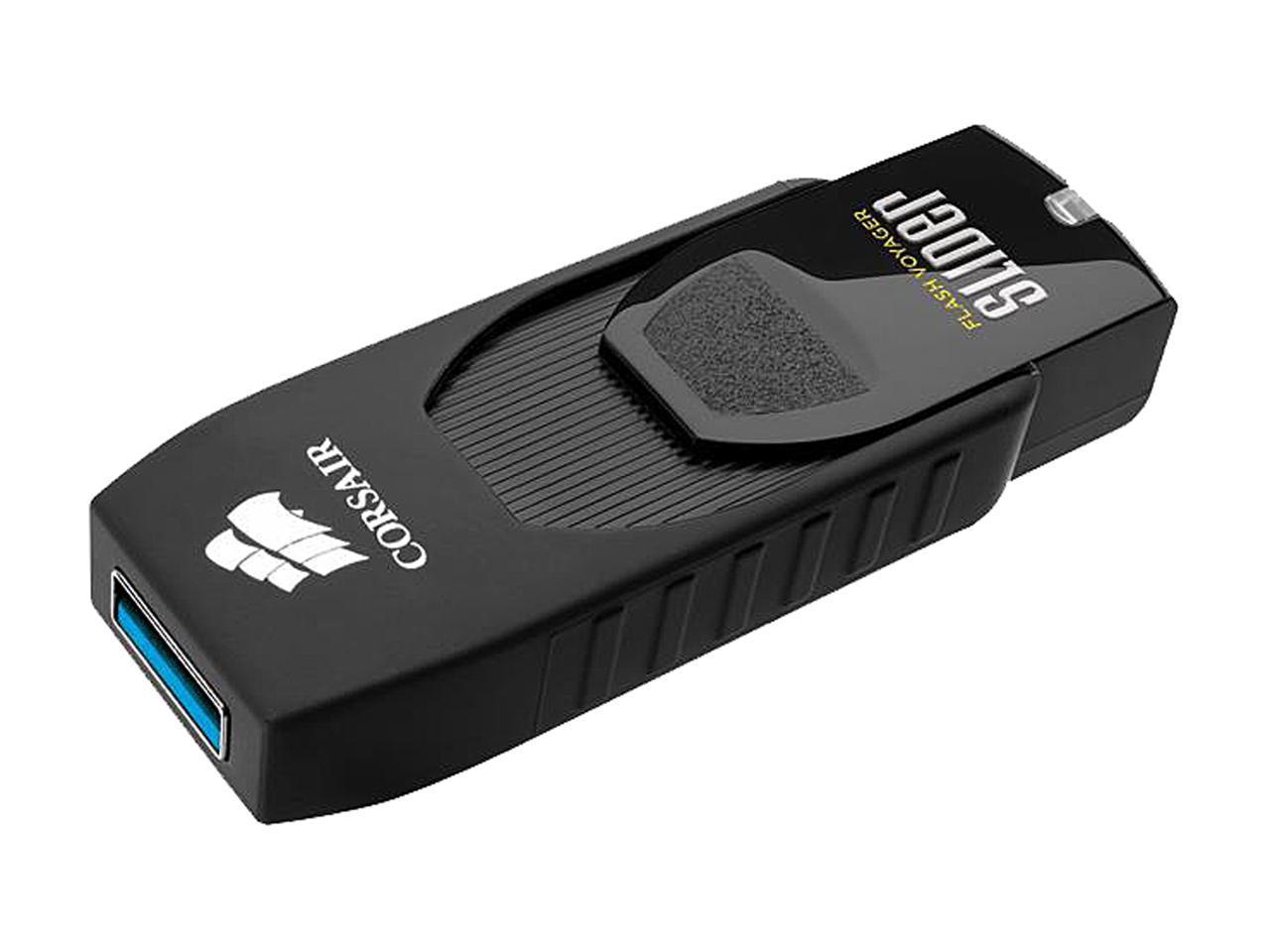 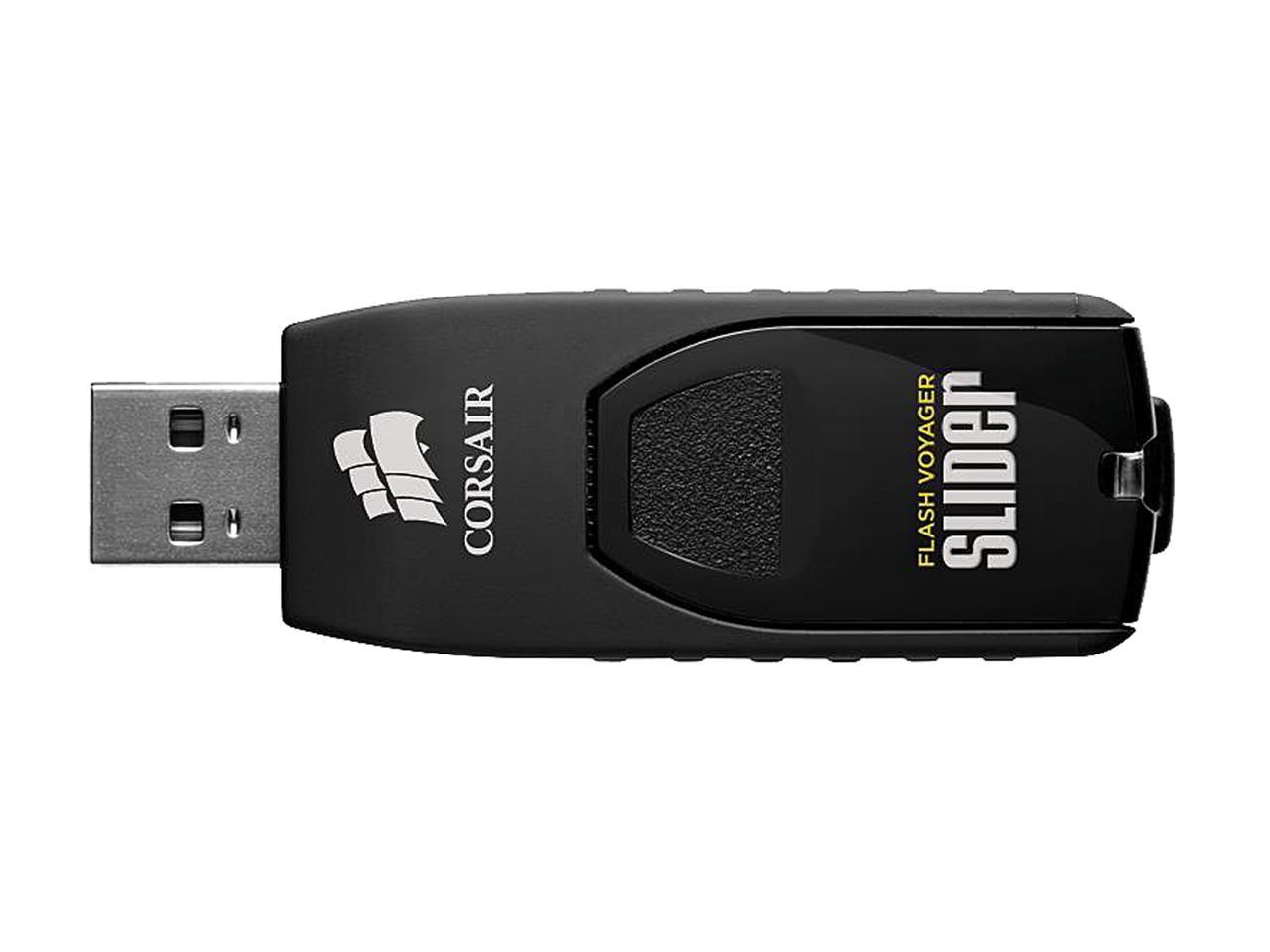 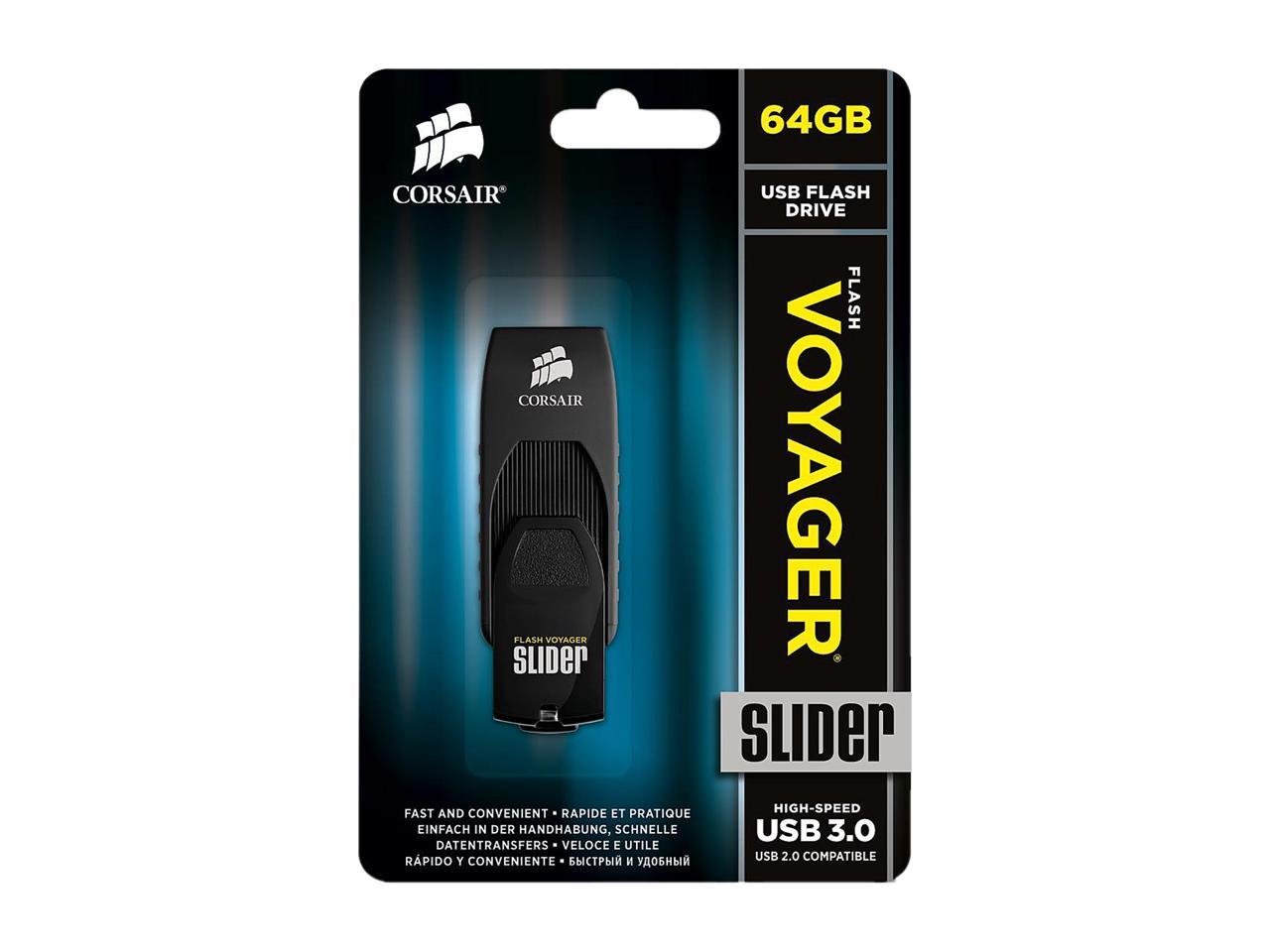 (62) Write a Review
OUT OF STOCK.
Overview
Specs
Reviews

Learn more about the Corsair CMFSL3B-64GB

Pros: Fast Read and Write Speeds on USB 3.0 I've received similar speeds as others USB 3.0 Speeds on average: Write: 10 -14 MB/s Read: 40 - 65 MB/s USB 2.0 and lower are on par with standards. I think the key points of this device is the slider, size and durability. Seems very thick and sturdy. Enough space to hold all my code backups, utilities, and ISO's for use around the office.

Cons: Slider isn't very tight and slides back too easily. A little thick if you have a tight spot between USB devices.

Overall Review: If used on a lanyard like in an IT situation around the office it works great.

Pros: Lots of storage for a pretty attractive price. Thick and somewhat built well, would easily take dropping and probably a wash cycle or two. Capless, retractable design means you won't have to keep an eye on a cap to protect the USB interface. Has a loop for a lanyard and a blue activity LED. Good USB 2.0 performance.

Overall Review: The Voyager GO is only $7 more (at this time) and offers (in most cases) double the performance, as well as a smaller size and MicroUSB connectivity for your smartphone. If you're in the market to buy a USB 3.0 drive, I'd definitely recommend the Voyager GO instead of the Voyager Slider. The Slider is serviceable, but, I think it would be an easier sell if it was roughly $20 cheaper, leaving the GO as more of a stretch/price premium over it.

Overall Review: I have MANY Flash drives. I use a lot at work and even more at home. So when using this flash drive I cant help compare it to ones I already own. With that in mind, this drive is not a speed demon. Read speeds are OK. Write speeds on the other hand are not that great. But I like to keep in mind a lot of "USB 3.0" drives these days are not as fast as you might think they should be (this even applies to Portable HDDs) . Its just the reality. When you go to buy a "USB 3.0 drive", unless you are spending big money dont expect much faster sustained write speeds over USB 2.0. Its just the way it is.... I did do some benchmarks for good measure but I really like to do real world test to know what I can expect out of each drive I own so I know what to best use it for. For that I move a folder of mixed files and divide the size of the folder by the time it takes to finish moving. For this test I used a folder of 13MP pictures and 1080p videos taken from my Note3. The folder was read to and written from My PCs Windows7 Boot drive (a Sata3 SSD). The folder was 13.7GB @ 909 files. avg speed as tested: Read: 13.7GB @ 3:37 = 63.1MB/s write: 13.7GB @ 15:47 = 14.4MB/s The next day I took this drive to work and did a similar test on a different PC. The File was a Linux ios. It was read to and written from the PCs windows8.1 Boot drive (a Sata3 HDD). The iso was 1.19GB. avg speed as tested: Read: 1.19GB @ 0:14 = 85MB/s write: 1.19GB @ 1:09 = 17.2MB/s With Both tests I left he Drive formatted as it was out of the box (exFAT @ 128Kb) and I also rebooted the PCs between write and read tests to eliminate any Cache that windows may have stored. Some other things Id like to note: The sliding action of this Cap less design is kind of cheap. It will lock in the open position but does not lock when closed. when in my pocket (or anywhere else for that matter) it kind of just half pokes out , not really closed or open. Not sure if mine is defective of if it even matters to most people. Its definitely not a deal breaker for me personally. Like almost every other Drive out on the market , There is a little hole at the end of this Drive for attaching to your key chain etc. Sadly though you will need to supply your own lanyard or smaller key ring to do this. As the shape of the hole wont allow for a regular sized keying to fit. I really cant wrap my head around why this is par for the coarse with manufactures. Either make the hole big enough for a regular key ring (something everyone commonly owns) or supply a small ring/lanyard with the drive (not something commonly owned). In the big picture im sure it cost less than a penny to include something like this in the package. All in all this is not a bad Drive. Write Speeds are the only major Con (since they are advertised higher) but I have a few other USB 3.0 Drives that have similar speeds, so by no means is this a "slow" Drive in the arena of Budget USB3.0 Drives.

Pros: There isn't a whole lot to say about a flash drive, but these are my thoughts. The flash drive is 64GB, it can hold a lot. The drive is made of 2 plastics. The outer part is a softer feeling plastic that can handle being dropped, thrown or otherwise abused. The rest is the shiny plastic you are used to seeing with a lot of cheaper electronics. The blue LED is lit only when transferring files and isn't too horribly annoying which is nice. The read speed is not too shabby either. The write times are a bit slower with around 17MB/s average on a file transfer. The read times average about 80MB/s. This will be the kind of flash drive to store CD images and other large files meant for redistributing. As for the average Joe, it works great for anything you could need, store it all and never worry about the space. But please, always keep a backup! We as a people will put more things on it as the capacity grows, but be leery of carrying all your eggs in one basket. See my other thoughts for my recommended application of this drive.

Cons: The write speeds are a bit shocking compared to the reading speed. You can read data at about 80MB/s, but writing is closer to 17MB/s. The slider design is nice in that there is no cap, but there is nothing to prevent particles and other objects from going in to the connector even with the slider closed. Finally, if you are not properly lined up with the port, you will simply close the slider instead of inserting the drive. The slider doubles as the grip and if you push too hard or have stiff USB ports, it will become very annoying to keep pulling the slider back.

Overall Review: All in all, I would recommend this drive for use by IT personnel for storing and taking ISO images and other large programs from place to place. This is primarily due to the number of reviews that cite failures. I have only had this drive for 1 month and have had great luck with it. But many have had failures and 64GB worth of data is a lot to lose. So always make backups of your personal data!

Pros: Good size for backing up files or what ever you need it for Feels pretty rugged and could withstand a drop Very Competitive price per size Recognized in 3 different operating systems (Win7, Win8 and Win 8.1) 5 year warranty

Cons: Definitely not the fastest 3.0 drive I have used as other reviewers have stated. Although the read speeds are pretty snappy the write speeds are only slightly faster that USB 2.0.

Pros: high capacity. inobtrusive cool slider designer. no cap needed speedy usb3. flash drives have come a long way since the 1gb/2gb/4gb days tried it in multiple computers and different versions of windows. no problem for system to recognize it played videos and podcasts off of it no problem. blue led blinks when being accessed

Cons: when you slide it close, the end slinks out a bit, the usb head doesnt stay fully closed tried to test it and drag and drop a blu-ray movie into it, it wouldn't let me, even though there was plenty of space. maybe this error is on the OS side I don't think the slider design will stand the test of time

Overall Review: I would pay a few more bucks and grab the 128gb capacity. You never know...

Overall Review: Other: The formatted capacity is 57.6 GB. It is formatted as FAT32, great for compatibility, but bad for large files. The write speeds aren't superb. I have older USB 2.0 flash drives that have better write speeds, but that was a selling point on those, not on this drive. The description lists fast read speeds and it does deliver them. I didn't encounter any real issues using this flash drive for small videos, documents, pictures, etc.

Pros: +USB 3.0 with good read speeds for a flash drive +No stupid caps to lose, since it retracts back into its own case. +64GB (57.6GB pre-formatted in FAT32) +Nice blue led that isn’t an annoying bright light. +5 year warranty so they must trust their product. If it did have to be replaced it shouldn’t cost much to ship it due to its light weight. Most products don’t come with 5 year warranties.

Cons: -It would be nicer if the write speeds were faster than they are.