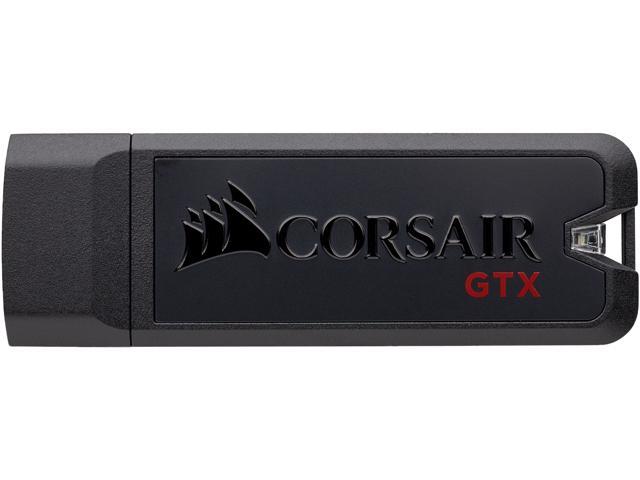 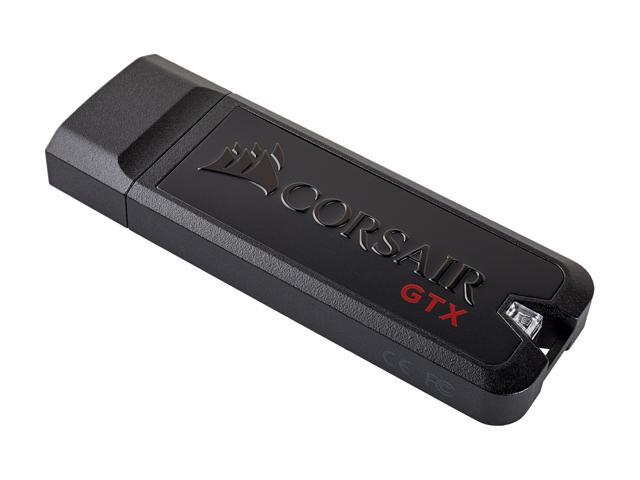 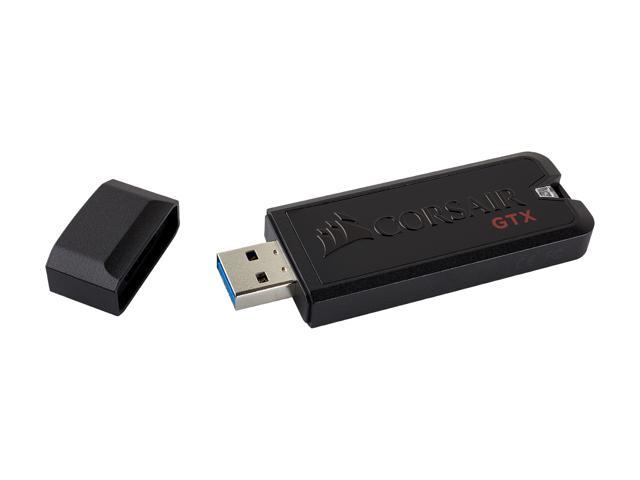 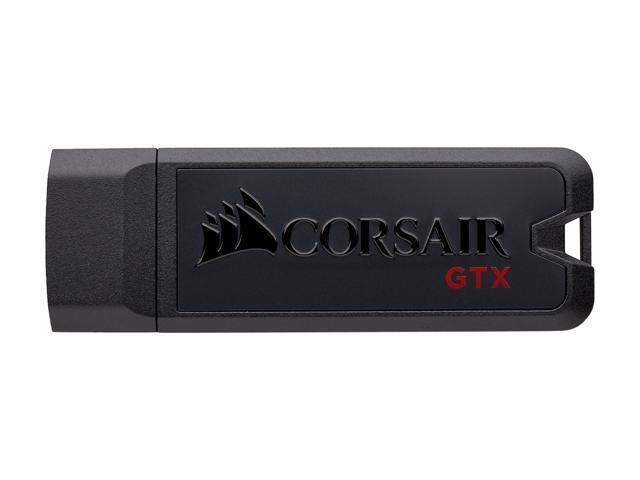 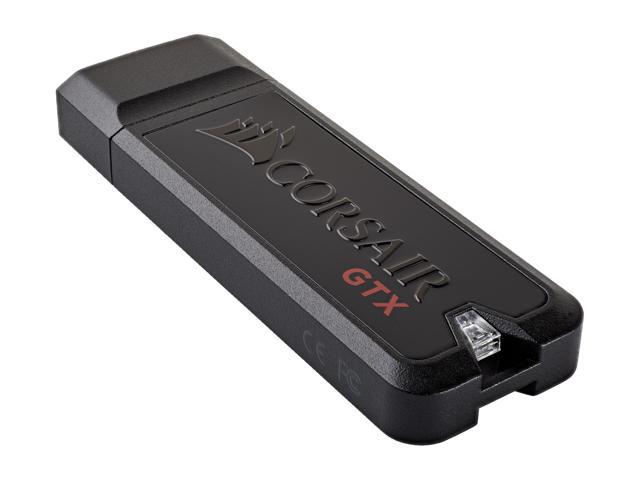 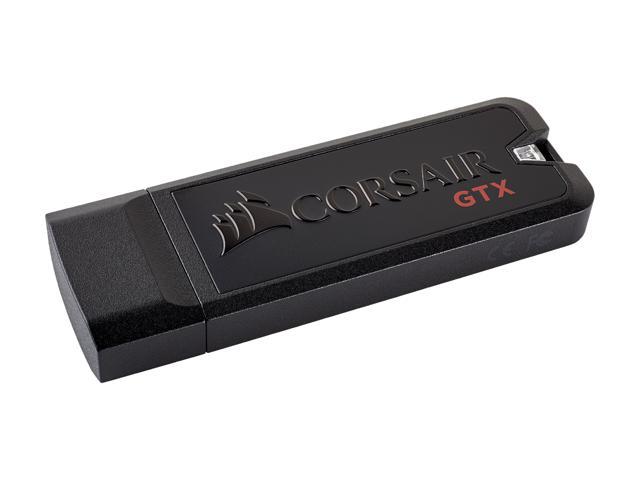 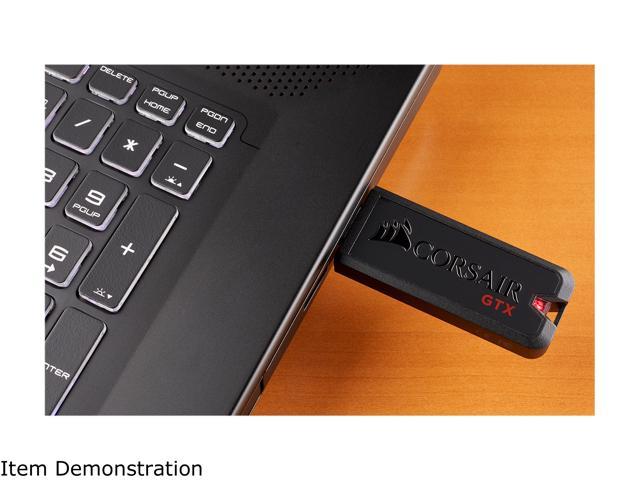 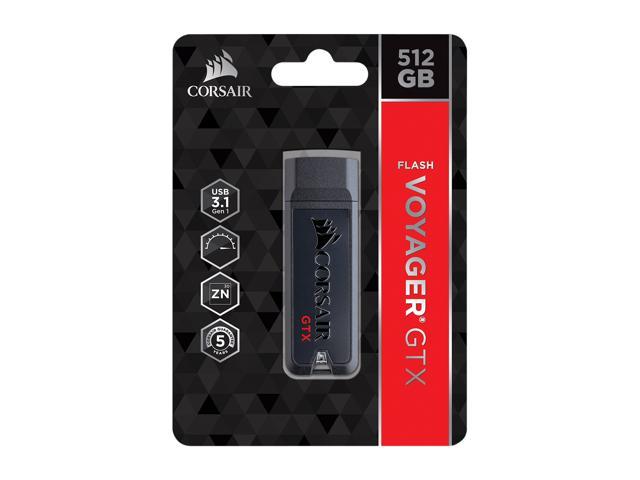 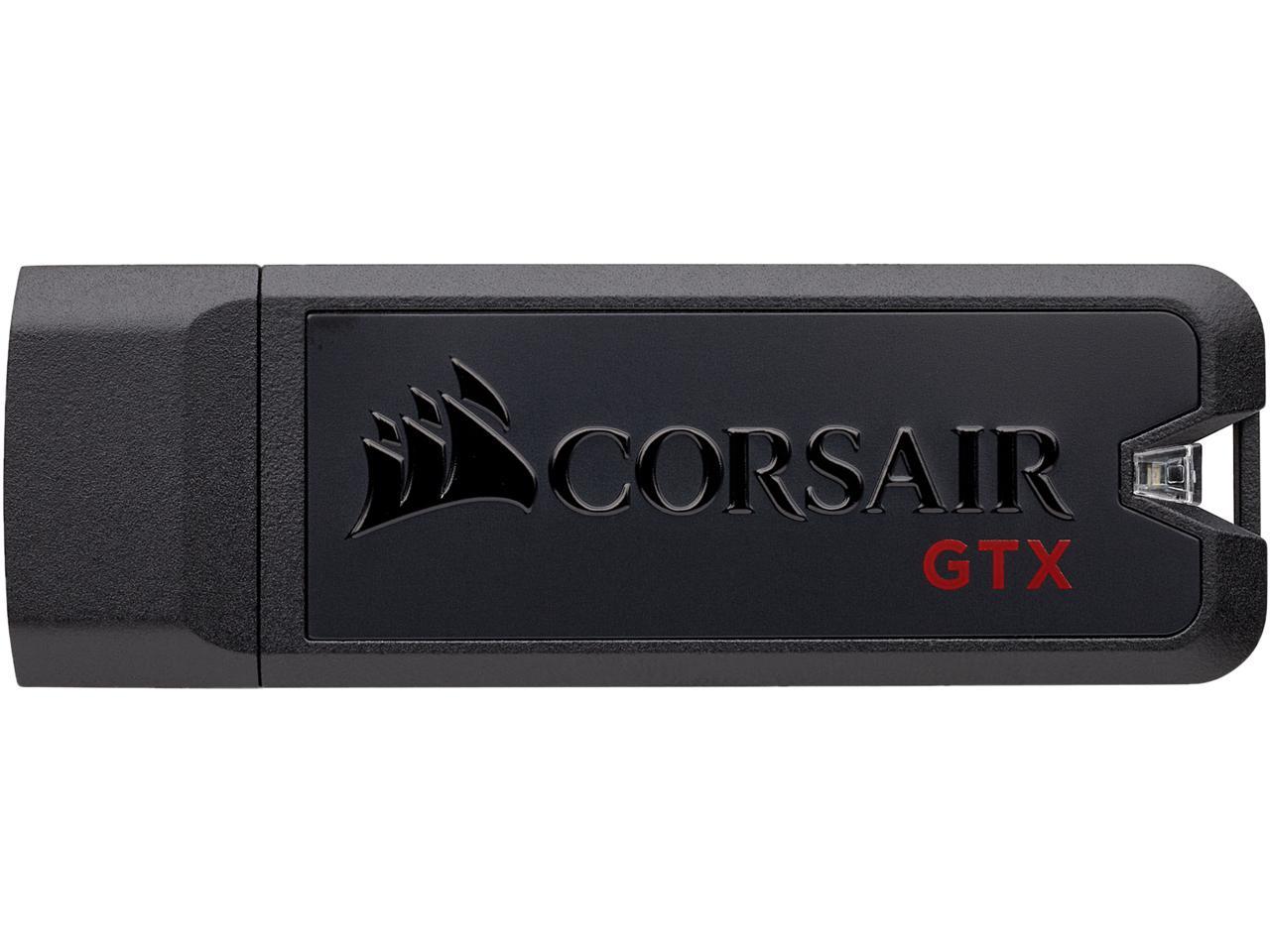 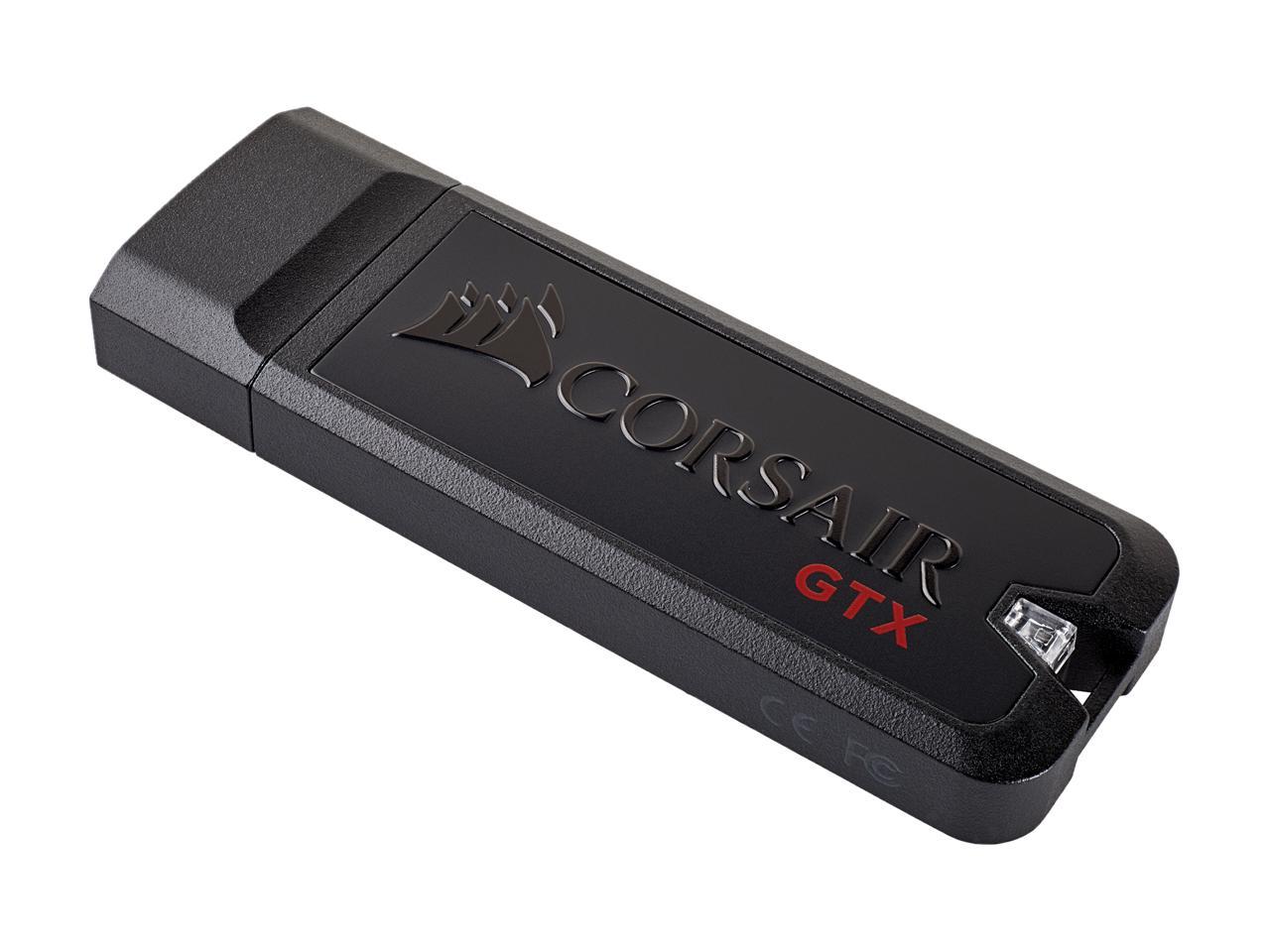 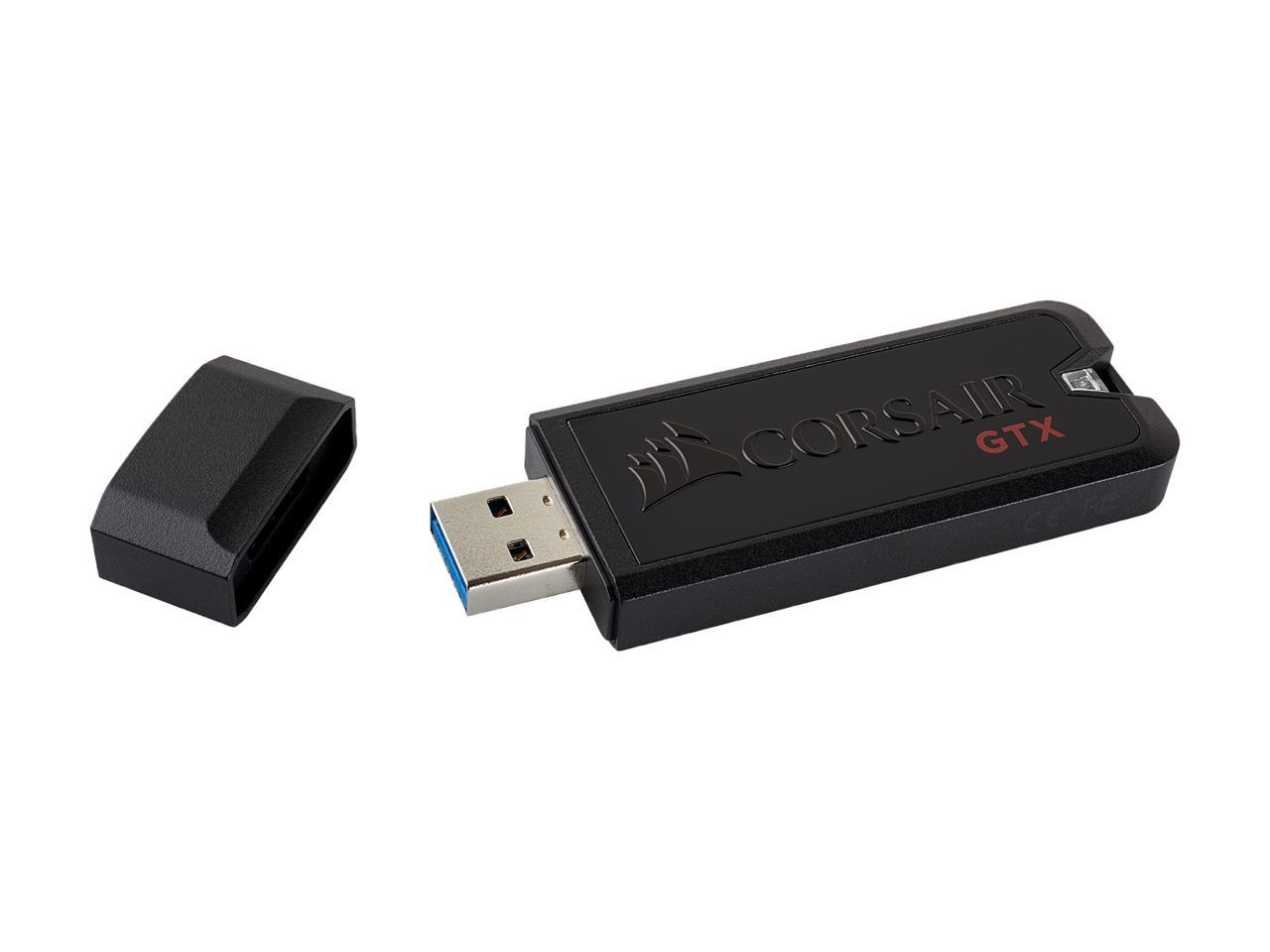 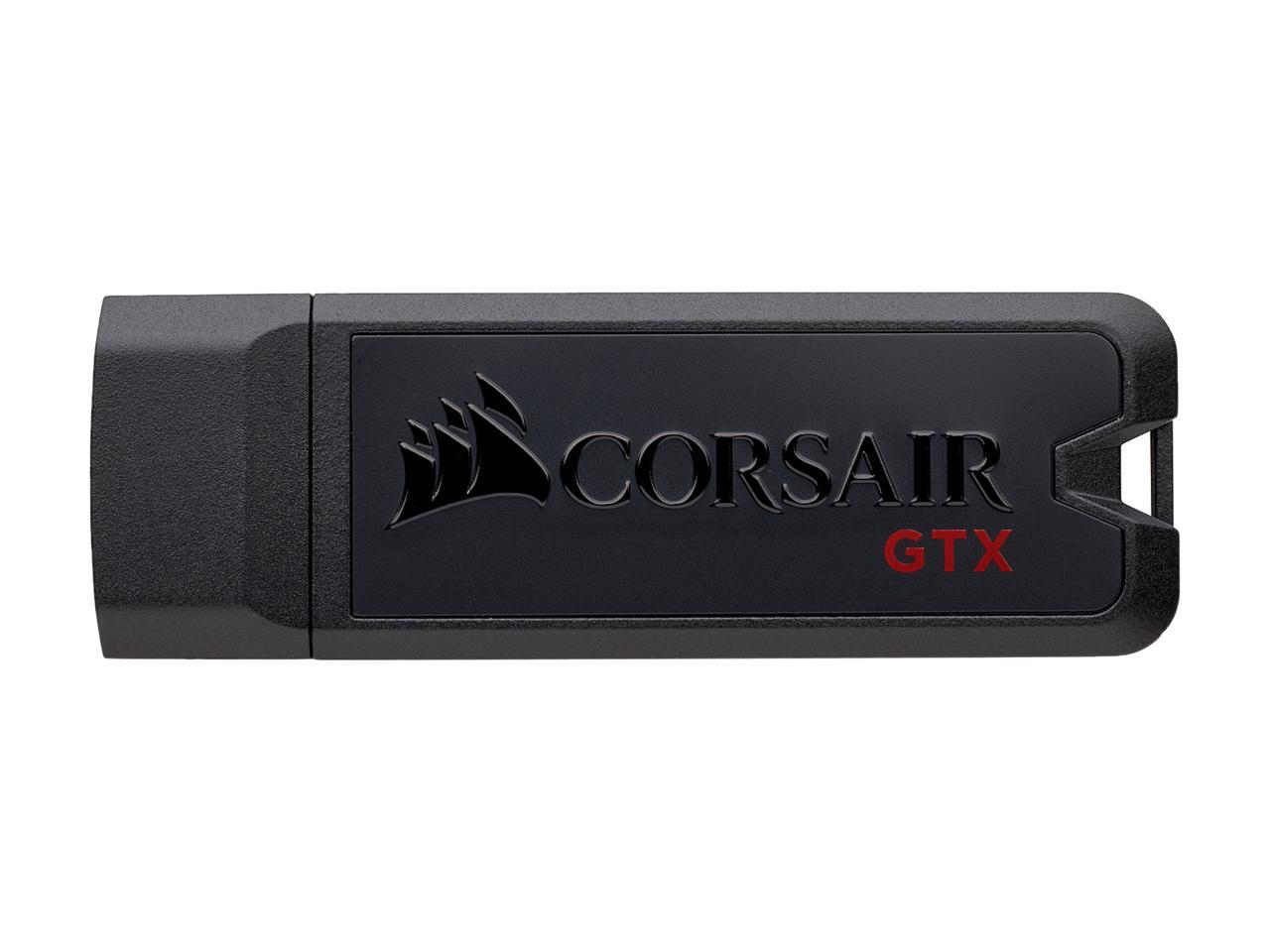 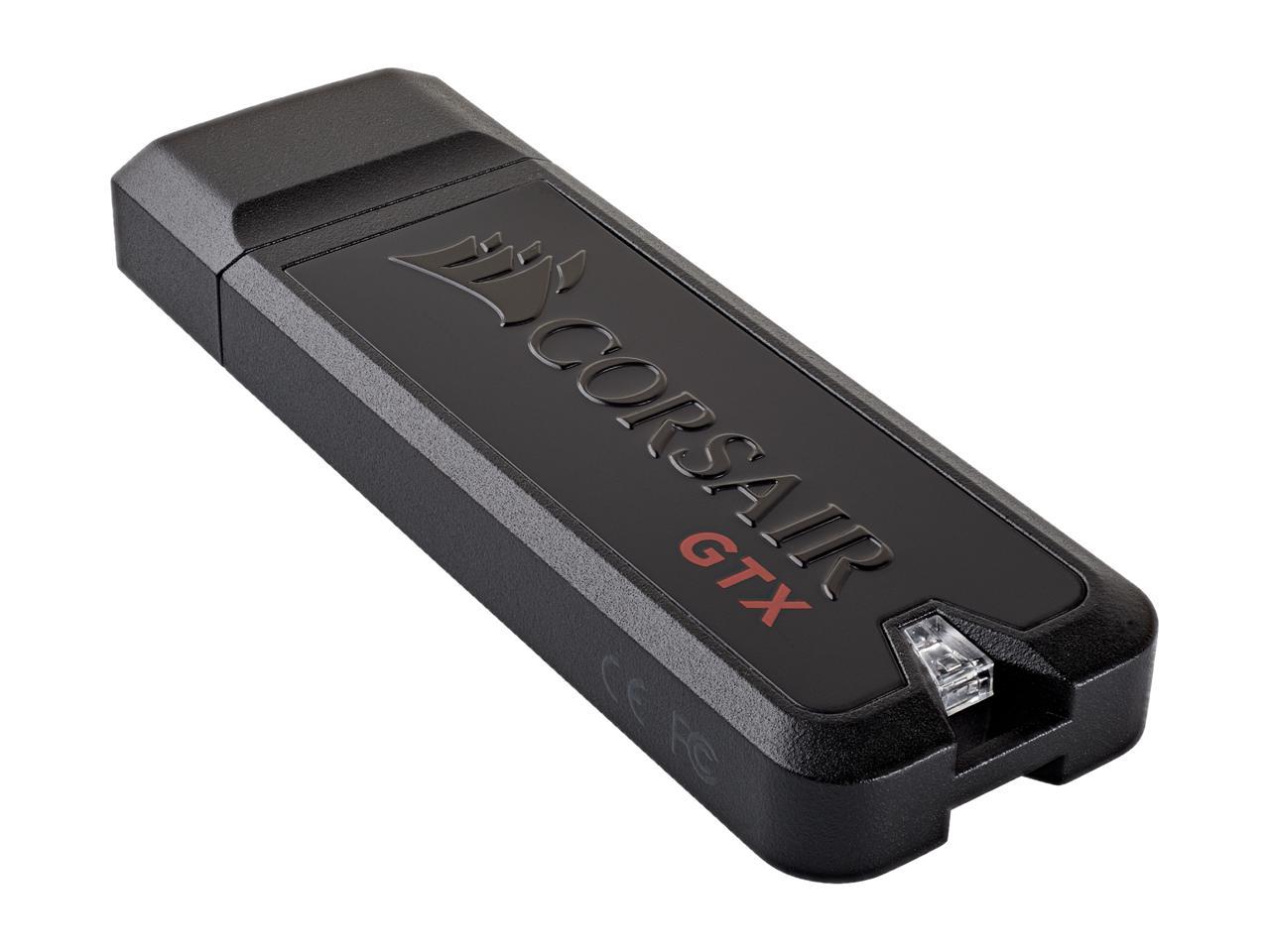 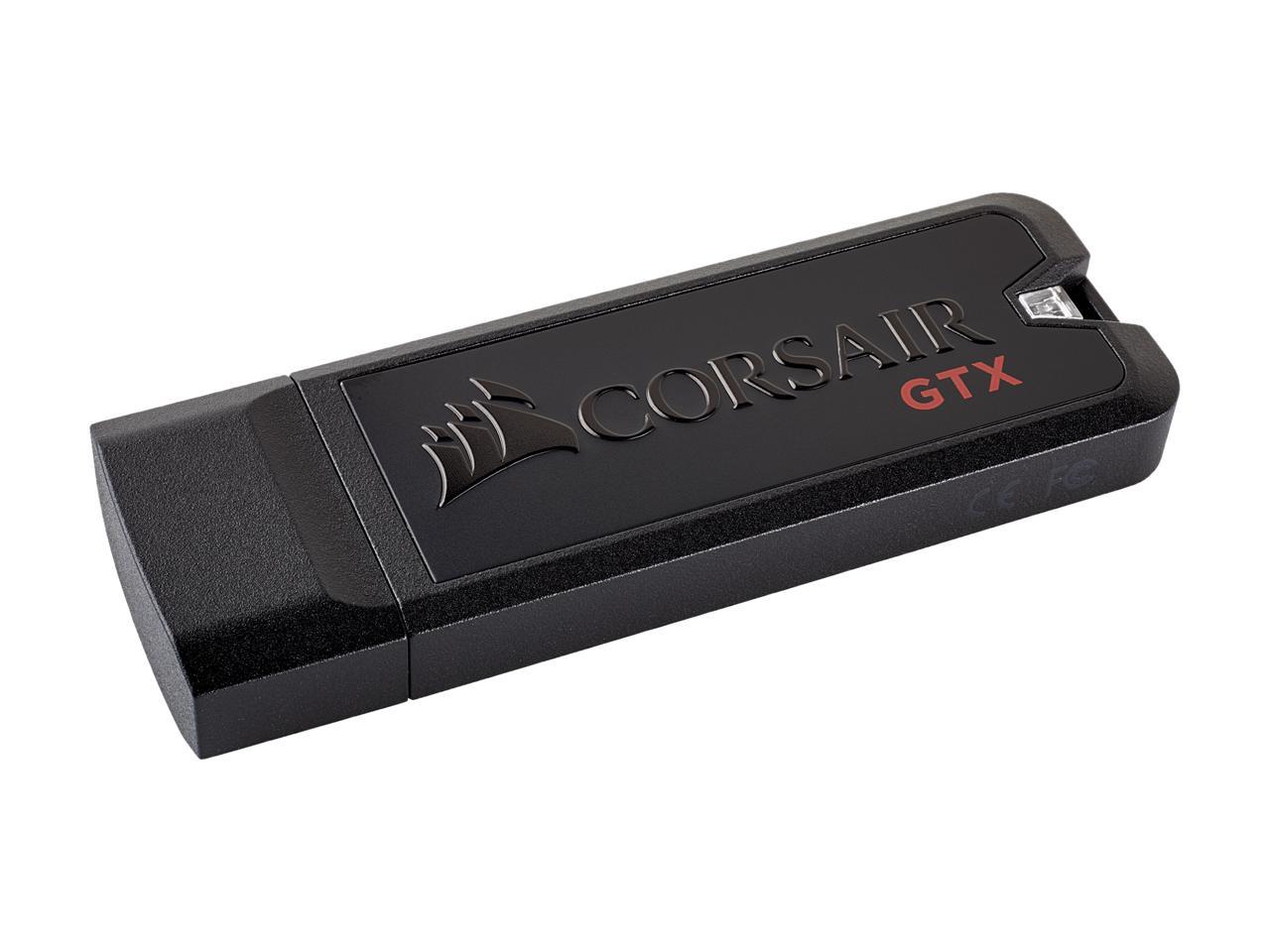 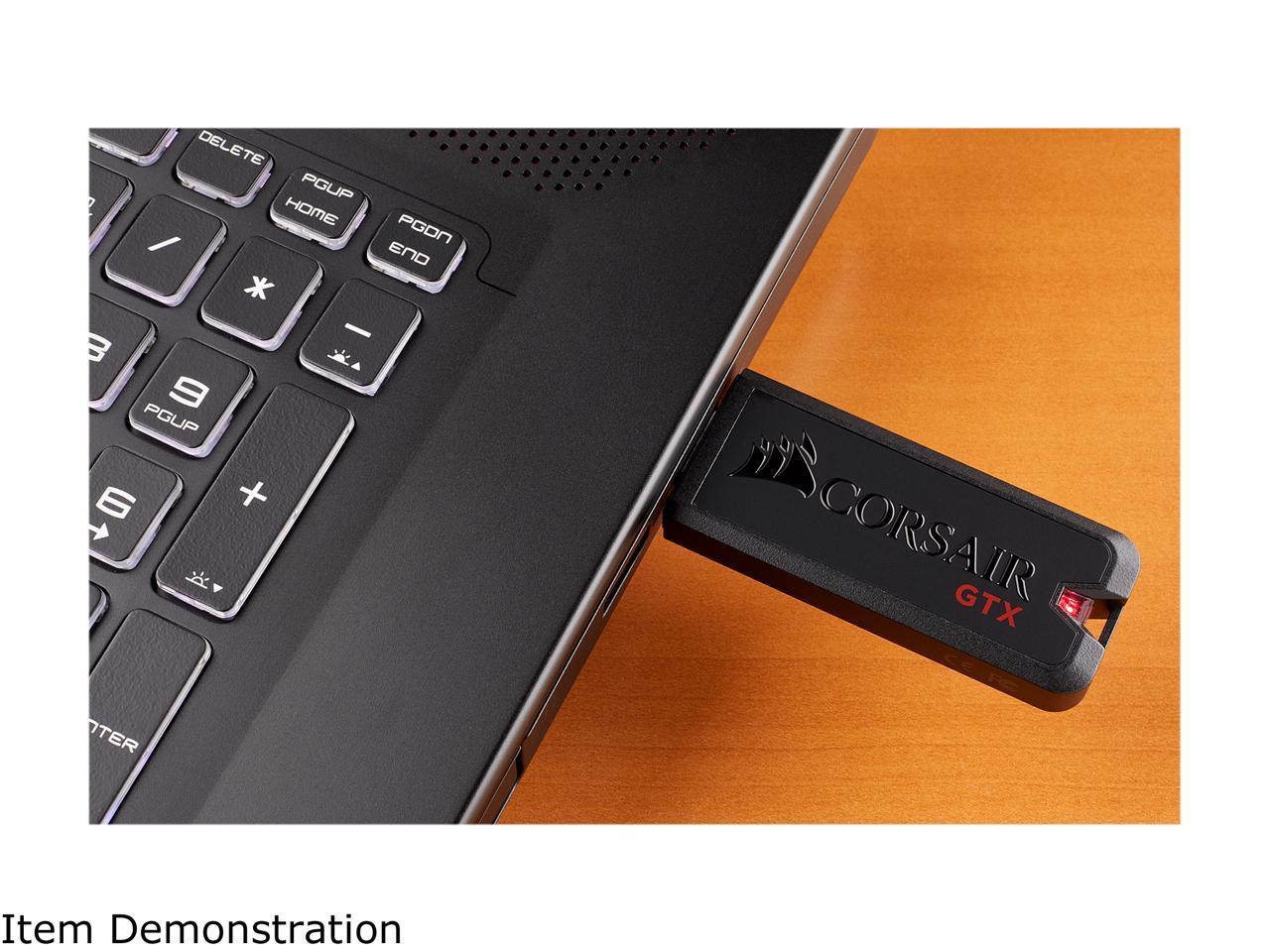 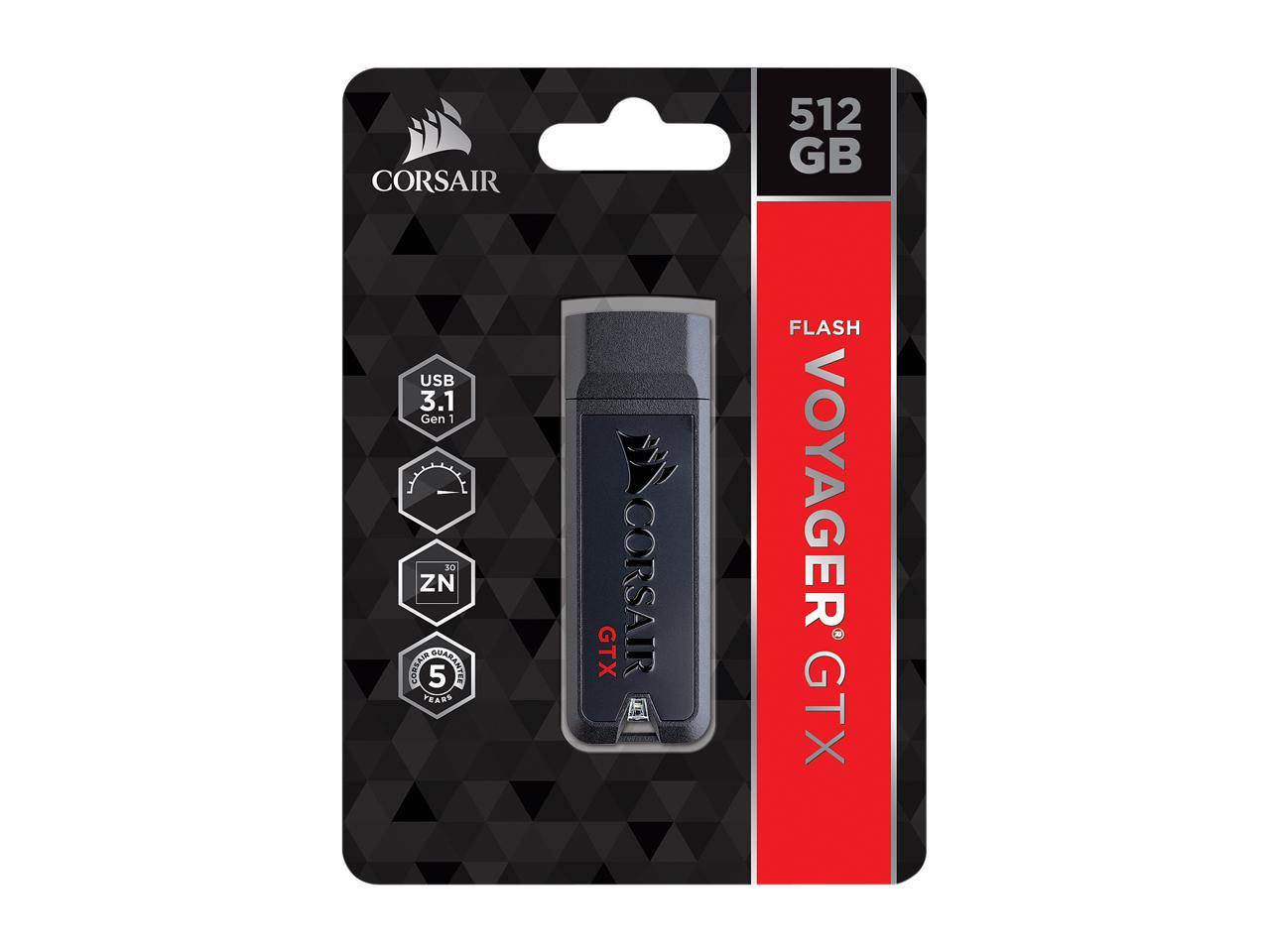 Learn more about the Corsair CMFVYGTX3C-512GB

Pros: size, both physical and capacity. 256GB in a USB drive that's not much bigger (smaller in some cases) than drives with much lower capacity.

Cons: It isn't the fastest drive out there, I ran a couple benchmark but the numbers are nothing to write home about. The drive is plenty fast to watch full HD movies from but copying to it can take a bit depending on file size.

Overall Review: I know benchmarks are great for comparing, but real world results for me tend to be 45 seconds per gig for writing files. Most videos I write to this drive range between 3.5 to 7GB so it can take a few minutes per video but it's worth having the ability to transport them in my pocket. My benchmarks don't seem to be quite as high as some other reviews but I'll post my results anyway. Comparing mine to other benchmarks, your speeds may be closer to theirs than I'm getting. My equipment is: MB: Z97E-ITX/ac CPU: i7 4790k RAM: 16gb (2x8) 2133 HD: Transcend MTS400 256GB M.2 SSD OS: Windows 10 Pro Insider Preview build 10074 CrystalDiskMark 4.0.3 4K: read 6.922 - write 0.078 Seq: read 43.84 - write 24.30 I have to give this thing 5 eggs. It may not be the fastest thing out there but it has made my life much easier. When copying multiple videos/large file you'll have to give yourself a few extra minutes but that's been the case with all portable drives I've encountered anyway.

Pros: Very small and compact flash drive, easily fits in tight places and would be very easy to carry around. Build quality is very good; despite being small, it's built well and feels very solid and rugged enough. The slider mechanism has a better, tighter feel to it than the other Corsair Slider (non-X1) that I have. Has a nice tactile click when the slider is in the full 'locked' position (either fully in or fully out). The slider piece has a rubber coating and side ridges, which helps with grip and overall feel. Has a lanyard loop and a blue activity LED. Having all this storage (256GB!) in a form factor smaller than a Hot Wheels car is just unbelievable. Read and write speeds across the board are excellent; either the best or near the best compared to the 2 other Corsair USB 3 flash drives that I own. (See 'Other thoughts' below for full details.)

Cons: Minor complaint: being a capless design means there's no cap to lose, and the USB interface slides into the main body, but obviously means it is not protected from lint, dust, dirt, etc.

Cons: - The drive doesn't make great use of USB 3.0. Writing several large and small files to the drive resulted in an average transfer rate of around 17MB/s with a maximum of around 19MB/s. Reading from the drive wasn't quite as bad but still never reported speeds faster than 73MB/s. Average reads were closer to 65MB/s.

Overall Review: Personally, I want more speed out of a USB 3.0 flash module, but the price isn't bad here. You get somewhat decent speed, great capacity, in addition to compact durability. It's a good deal if you don't require the speed. The drive is preformatted using FAT32 which does not support files larger than 4GB. Unless the drive will be used on an unsupported system I generally suggest formatting to NTFS or exFAT. I noticed another reviewer questioning the 58GB reported capacity. This is normal and is the result of how computers calculate storage capacity vs the way storage capacity is sold. The drive certainly has around 64,000,000,000 bytes available. However, a kilobyte is not 1000 bytes, it is 1024 bytes. Similarly, a megabyte is 1024 kilobytes, not 1000. And so on... The number to remember is 1024, not 1000. So, if you do the math you'll find that 64,000,000,000 bytes comes out to 59.6GB. All drive capacities are calculated this way.

Pros: Fairly compact capless design, this mid-range flash drive is a great way to update your aging USB 2.0 drive for a reasonable price. The sliding design protects the USB connector when not in use, so you can toss this in your computer bag, purse or pocket. There is also a place for you to connect a lanyard or keychain, if you like. The sliding portion is non-slip coated and has knurling on the sides, so its easy to open and close with two hands, but takes some practice to do it one handed. Drive comes preformatted FAT32, and is nice and empty, ready to go. No "included" software junk. Of course, if you want to save big files on it, you'll want to reformat to NTFS or exFAT. I used exFAT.

Cons: Transfer speed. As a mid-range drive, its speed is not the fastest, but is almost certainly faster than your old USB 2.0 drive. Using a computer with a known fast USB 3.0 port, I measured 78 MB/s read and 17 MB/s write speeds. The write speed was a little disappointing comparing to other drives in its size/price class, but the difference isn't huge. (I'm calling this price class "midrange" which to me means a value priced drive from a name brand with a real warranty.) So your decision to buy this is probably still based on price, design, and brand. The design is boxy, which is typical of corsair, and reminds me a bit of 1980's TRON video game. A bit wider than some other drives, it may have a fit issue for some, but it wasn't a problem for me.

Overall Review: Like the design? Need a big flash drive for short money? Is it on sale? If the answer is yes to these, this might be your next flash drive. Those who want more performance might step up to the well rated Slider X2 version of this drive, which, for a few dollars more, promises *much* higher speeds. "You pays your money and makes your choices." I compared this drive head to head with a Sandisk Ultra USB 3.0 64GB sliding drive -- a very similar drive: Roughly the same physical size, sliding case design, USB 3.0 with similar advertised speed and typical price, and also released recently. The Sandisk was about 5-10% faster in my measurements, mostly in improved write speed -- enough to measure, but not enough to notice in actual use, I suspect. The Sandisk design is more '90s than '80s, which is to say its less boxy. The Sandisk sliding mechanism while easier to "one-hand" may be more difficult to use by folks with bigger hands or arthritis :). YMMV. Catch either on sale for about twenty bucks and it's a no-brainer. Ask yourself, why are you still walking around with a 4GB USB 2.0 flash drive in your pocket when you can carry 64 GB for the cost of a yuppie food coupon?

Pros: USB 3.0. Shorter length than other USB flash drives. Retractable USB head can protect it from damage. Good read/write speeds compared to other USB 3.0 drives I've used. Corsair product warranty. Considered a pro because I've had good experiences with Corsair customer support in the past.

Cons: USB contact is exposed even when retracted. If carried in a pocket or pack/bag it will collect dust, dirt, etc inside the USB head. When inserted into a USB port some of these particles will remain behind. Does not lock open or retracted very well. Could possibly come open in your pocket exposing the USB head to damage. Also can make it a little more difficult to plug into the USB port than necessary if not held by the proper points.

Overall Review: USB 3.0 write speeds varied from ~100-130MBs. Read speeds reached up to 635MBs. Writing to & from a Samsung EVO 840. The Corsair Flash Voyager X1 gets average 25MBs faster write speeds and 40+MBs read speeds than my Patriot Supersonic 32GB. For the price I would say it is worth it for the speeds but I would avoid it because of the capless design.

Pros: It's a fairly useful USB 3.0 pendrive. The Key-ring hole on it is big enough to give some play on the lanyard, which is appreciated. The rubberized coating seems to have held up very well through the environment as it has seen a lot of use as an imaging/software storage pendrive for me. The memory itself has been reliable and the transfer speeds are decent. The fact that it's a slider means you don't have to worry about losing a top cap.

Cons: It would be nice to be able to disconnect the keyring hole section from the rest of it. I've seen better speeds with other drives. It's also a tad wider than a standard pendrive.

Overall Review: Overall a solid pendrive that I recommend.