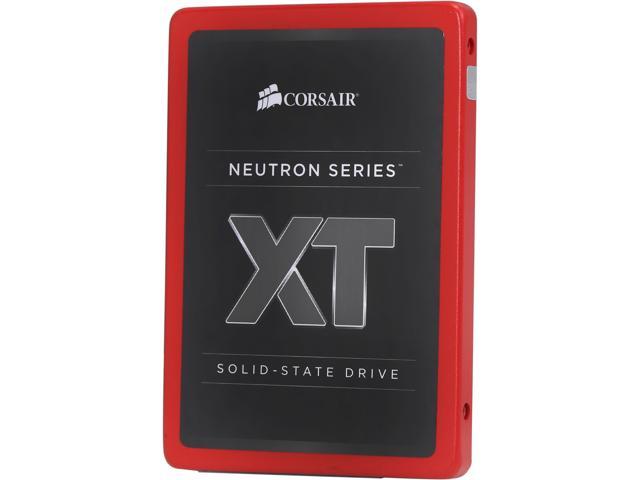 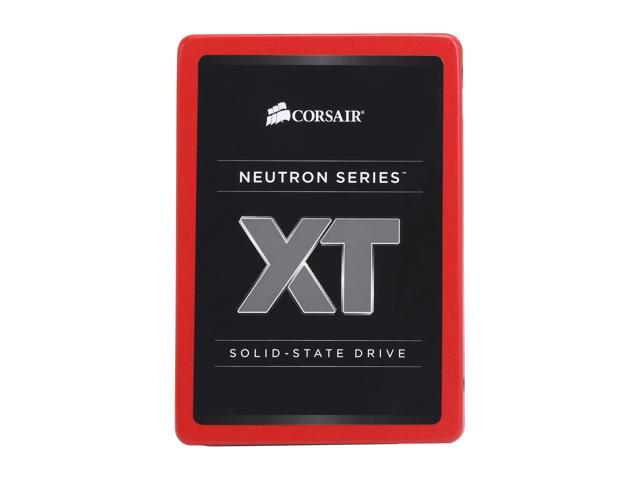 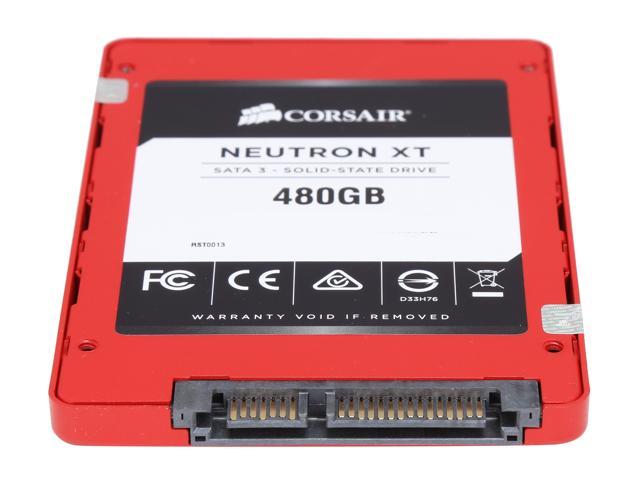 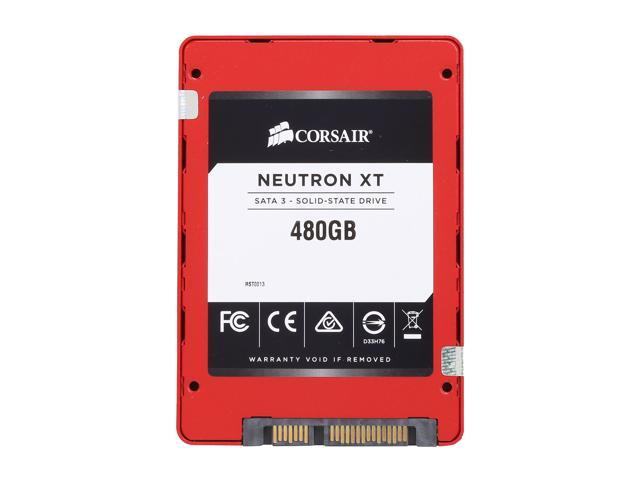 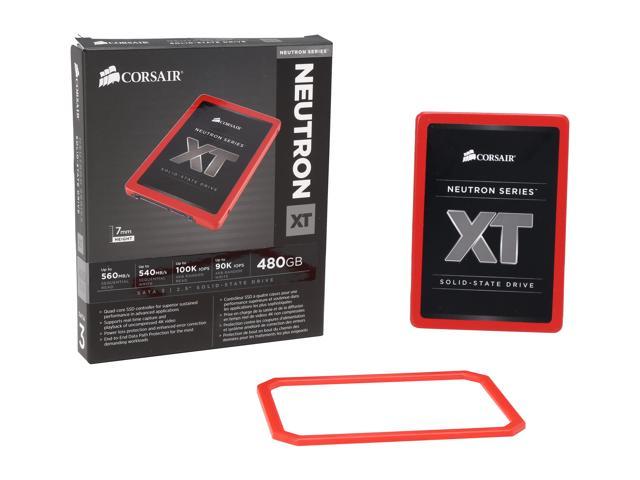 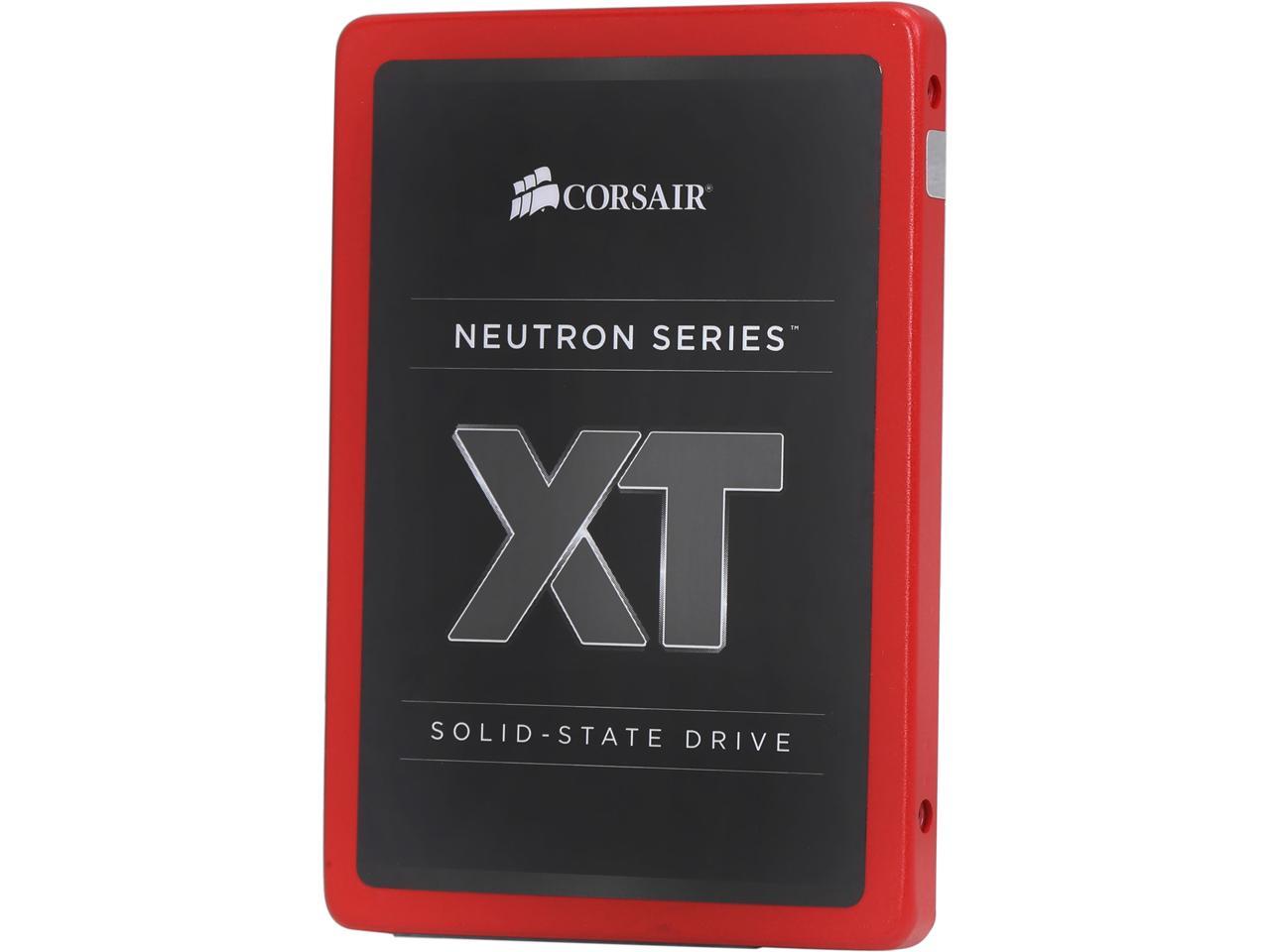 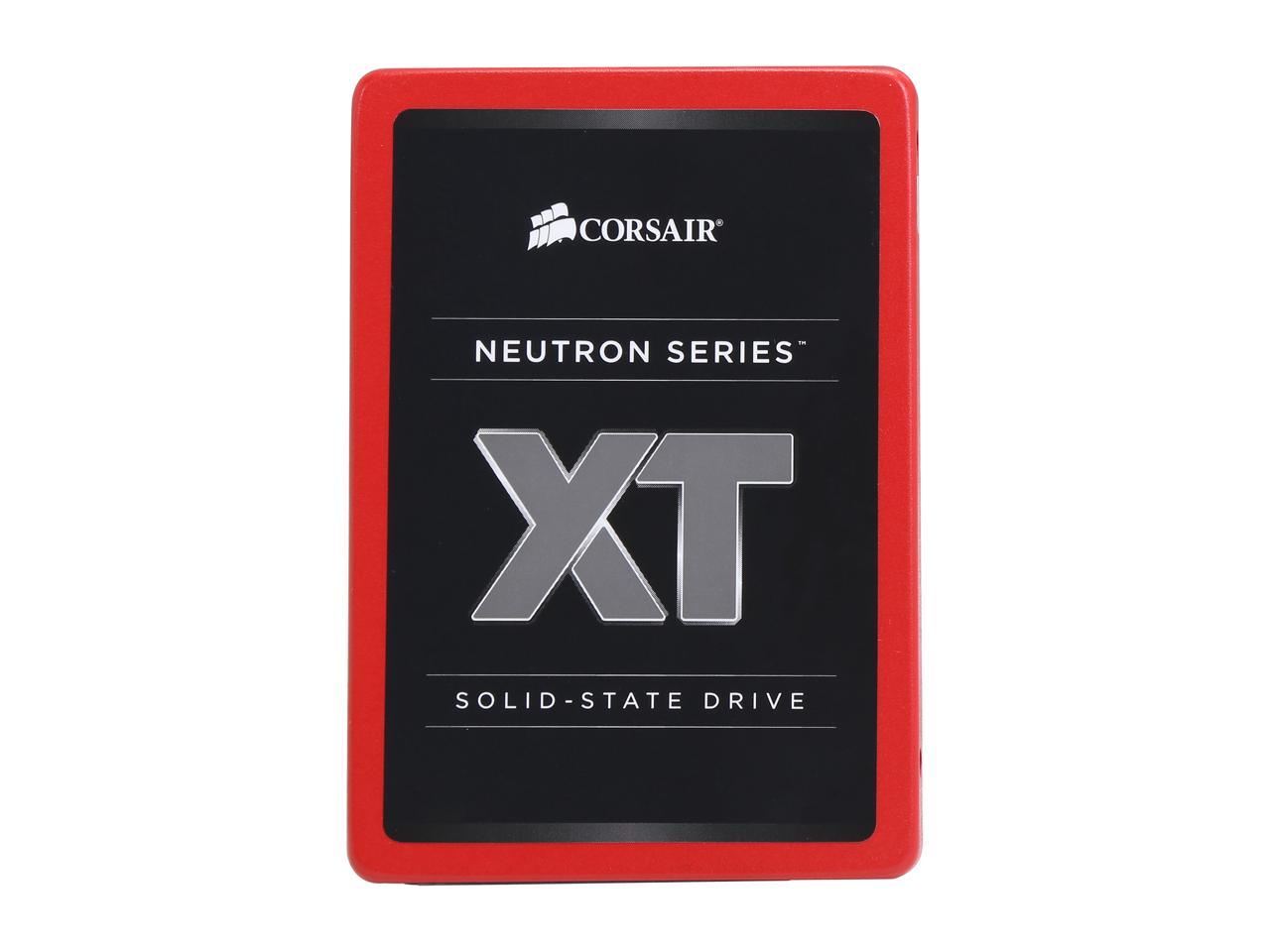 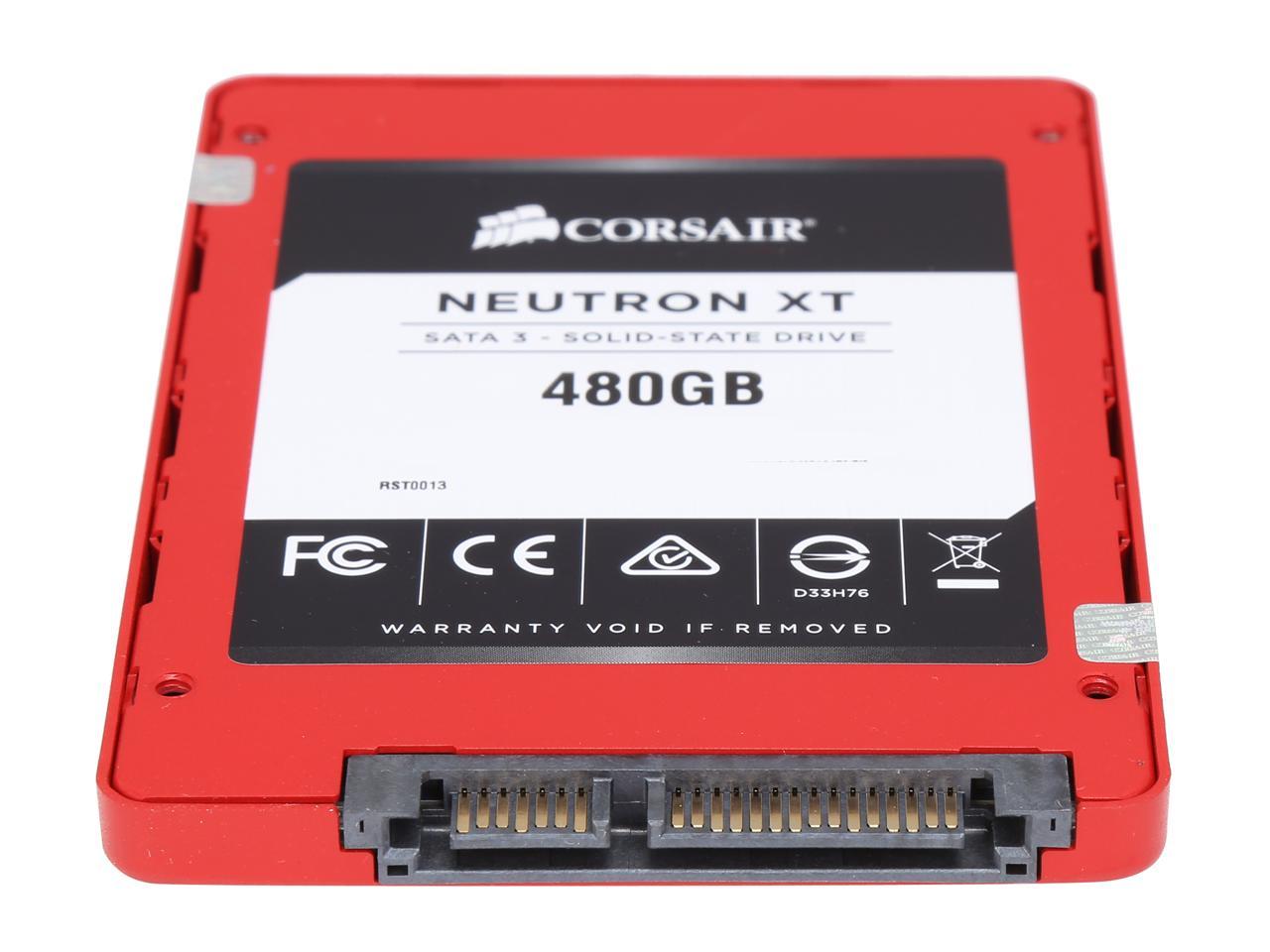 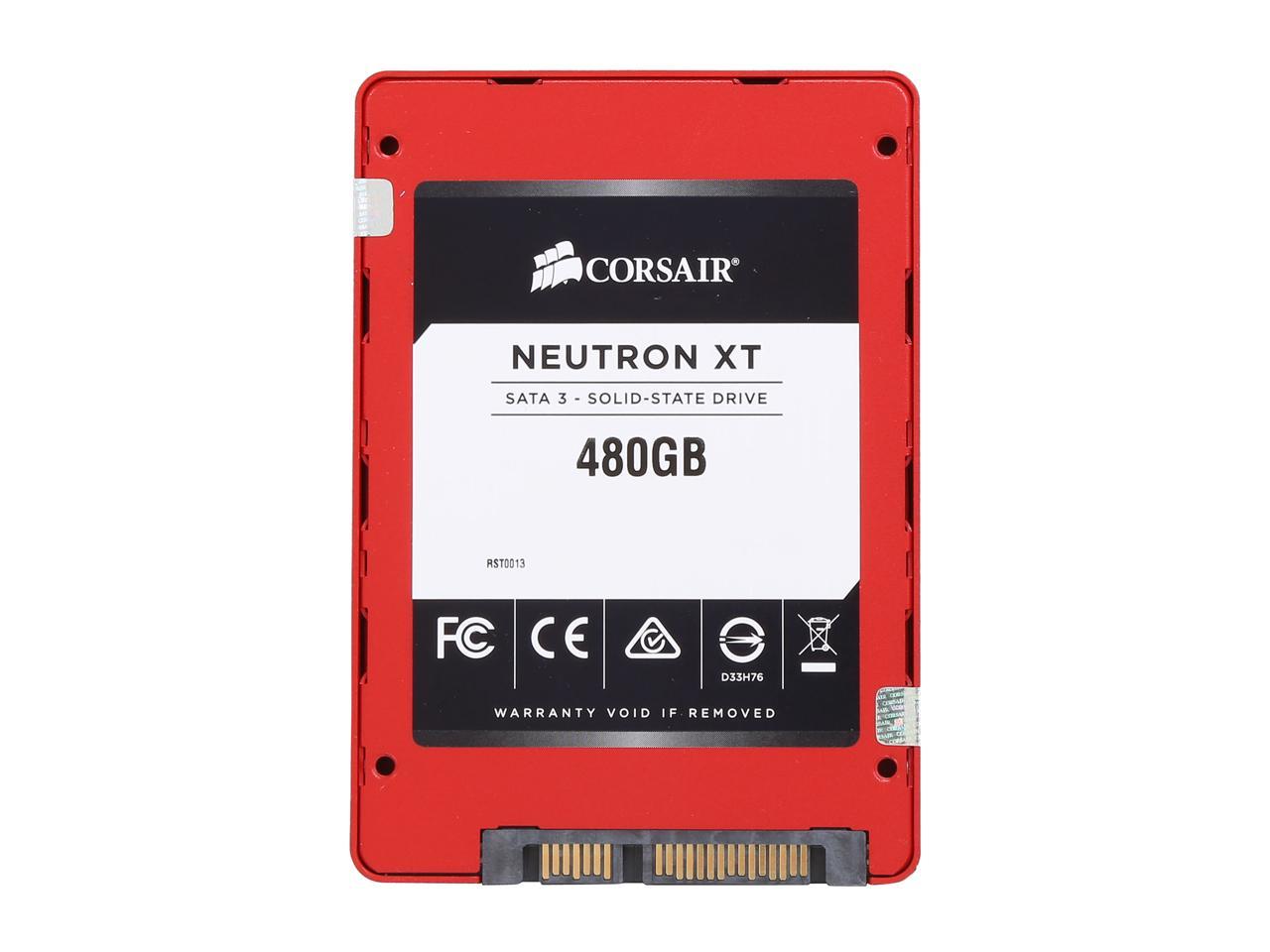 Learn more about the Corsair CSSD-N480GBXT

Gentry B.
Ownership: 1 week to 1 month

Pros: This little thin light weight 480GB SSD pretty much nailed its top read and write speeds. When plugged into a SATA III slot on an Intel Z77 motherboard, according to ATTO disk benchmark suite, sustained write speeds of 540MB/s and read speeds of 560MB/S were almost instant. Basically this little drive reaches the highest possible speeds the current SSD hardware architecture can achieve. The next step up in speeds would come from the new PCIe SSDs which easily doubles the rate, not to mention pretty much doubles the price too.

Overall Review: Excellent drive, I could not be more happy or impressed. The life of the drive and energy efficiency is guaranteed. For those looking quick boot times, fast game loads or solid high resolution video streaming, this drive is for you.

3 out of 3 people found this review helpful. Did you?
Scott S.
Ownership: 1 week to 1 month

Pros: Must have!! Amazingly Fast!! Great SSD Very fast over 580mbs through a USB 3.0 to SATA adapter that's pretty Awesome!! Transfer 40 GB of data in about a minute. I didn't believe it so i transferred 100 GB in under 3 minutes. This Drive is on the higher end quality witch calls for the higher price tag but with a 5 year warranty and the speeds its worth the extra $$$ For further testing I installed this Drive into my PS4 now tell me about game loads and boot ups are basically gone, boom, boom, boom, its ready to play wow what a difference. This drive would be a Awesome addition to a laptop, desktop really anything with a hard drive. Its a must have must buy piece of hardware!!

Cons: None maybe little lower price but that will come with time.

Overall Review: Drive has error correcting abilities also that you will never see happening witch is great when ever bit counts.

2 out of 2 people found this review helpful. Did you?
Gokul K.
Ownership: 1 week to 1 month

Pros: Small, compact and sleek, as expected from a standard SSD. Runs quietly and cool. The biggest thing about this particular SSD which grabbed me was the speed. Taking an average of 3 CrystalDiskMark specs the results were 522 MB/s read and 508 MB/s write. Lower than what is advertised but real close and good enough in my book. Boot speeds were fast as usual with my pc booting up in 7 seconds flat. Corsair SSD Toolbox is a breeze to use and very easy to navigate. Firmware was updated promptly and useful features such as overprovisioning are available. NAND memory is MLC meaning two bits per cell. This results in greater longevity than TLC based SSDs which contain 3 bits per cell. This is also a Toggle NAND SSD which uses both Asynhronous and Synchronous memory access. Plain and simple, this results in better performance at a lower cost. Power consumption is lower due to smaller and more power efficient transistors than older SSDs. SSD controller is quad core which supposedly results in lower latency and higher performance compared to older controllers. Can't really test the benefit of it but it sounds good on paper

Cons: No VNAND (vertical nand) memory. Touted as being the better type of NAND to use with performance and longevity benefits across the board Only a 3 year warranty which is expected of MLC memory. Wish it was more though. No option for disk clone.

Overall Review: Solid SSD and definitely one to consider when looking for performance at a decent price point. Being a MLC SSD, it will last you quite a while with moderate usage most likely longer than the warranty. However with VNAND just entering the market this drive does not look appealing in my eyes due to the increased performance and longevity benefits that VNAND provides. Nevertheless a worthy choice for anyone that is looking to use this a boot drive or simply for data storage.

2 out of 3 people found this review helpful. Did you?
gregory b.
Ownership: 1 week to 1 month

Cons: Not as fast as it could be in random reads No disk cloning software functionality 3 year warranty

Overall Review: Every single one of my home and work computers and laptops now has at least one SSD, working as a boot drive and some also utilize SSD’s as data drives. The reason for this is simple, even the slowest SSD is many times faster to access than the older mechanical HDD’s. HDD’s are still cheaper but the cost of SSD’s have dropped in the last few years making them an absolute must for anyone considering an upgrade. That brings me to the Corsair Neutron XT, this is a fantastic looking drive in black and red and the specifications are mouth-watering, MLC Nand, a quad core cpu controller and max read and writes of 560mb/s and 540mb/s. This should be one of the fastest SSD’s I own. I cloned the boot drive (Samsung Evo 850 500gb) of my primary PC easily enough using EaseUS Todo Free. I did install the Corsair Toolbox first but there was no option for disk clone. Once installed I used the toolbox to check for new firmware. This was easy enough and better than having to search for the correct firmware online manually. The pc certainly booted in to windows quickly which was encouraging to see. As I run a 500gb Samsung 850 Evo in the PC usually, it was easy to run a few tests, including Crystal Disk Mark and AS SSD (which can both be downloaded online for free), and compare them to the Samsung drive. I was blown away; the speed of the Corsair Neutron XT was amazing. In Crystal Disk Mark the results for sequential read and write were 551mb/s and 543mb/s. The Samsung 850 Evo gave results of 532mb/s and 521mb/s in the same test. AS SSD uses incompressible date samples in its tests and is a great tool to test SSD’s with as it often shows a worst scenario situation. Anyhow the Corsair aced this test too with reads and writes of 519mb/s and 502.40mb/s. My Samsung drive ended up with 496.35mb/s and 489.50mb/s. In all fairness once the Samsung rapid mode is enabled the Samsung drive is faster but all tests were done with rapid mode set to off. In AS SSD copy mode the Samsung drive was faster than the Corsair XT but not by much. I do a fair amount of photo editing and the Corsair XT felt just as speedy starting Photoshop and booting in to windows as the Samsung drive. I was disappointed in the 3 year warranty, I fully expected that for a drive of this price and quality 5 years should have been the minimum, after all it is running MLC Nand with a quad core controller. This brings me to the performance and price. It is a fast drive, probably the fastest drive I currently own, however it is also the most expensive drive I own. This makes it difficult to recommend, I can have 95% of the speed at 66% of the cost if I buy my current favorite SSD. Granted I won’t get the fancy MLC Nand or a quad core controller or the overall speed. I took an egg off for warranty and lack of disk cloning software. This is a blistering fast drive, to justify the price I would want a better warranty and disk cloning software, or a lower overall cost.

Overall Review: ...Currently testing Win10, Mint Linux 17.x and good old Win7-64 Ultimate in serious gaming mode... I like! I picked up one of these elsewhere...

Pros: Extremely fast performance Looks very Nice Feels strong when you take it out of the box

Cons: I'll update if I encounter any

Overall Review: I have never purchased anything I wasn't satisfied with from Corsair. They have always made high quality products and this is falling right into that zone.

Pros: I installed this SSD and cloned my OS from the HDD I was using (7200 RPM Western Digital Black), and I have to say... the difference is absolutely noticeable. This is my first SSD, and the only question I have to ask is "why didn't I buy one sooner?" I'm running on an older machine I built 5+ years ago (Core 2 Duo 3.0 GHz Processor, 4 GB RAM, Abit IP35 Pro mobo, Nvidia 8800 GT ... nothing the least bit impressive), and I'm in awe. I noticed the difference as soon as I booted on it the first time. Visual Studio launches in a fraction of the time, and the difference in the read/write time is significant. 10/10 would recommend without question.

Cons: None. This drive is amazing, and I'll be buying more for my other computers.

Overall Review: I bought this drive (along with four 2 TB Western Digital HDDs) after the HDD died on my work laptop. Going through the stress and frustration of recovering the data on that laptop made me realize how old that the hard drives on my personal computers were getting, and the fact that I didn't have a redundant backup system for my data. Do not let yourself think "It's an SSD, so it won't fail and I don't need to back up my data." An SSD is not a silver bullet for keeping good habits and keeping your data backed up.

Pros: Speeds are exactly as advertised and are very consistent. The Corsair SSD Toolbox software is very good and not bloated with things you don't need.

Cons: Price. But it is comparable to other high capacity drives right now.