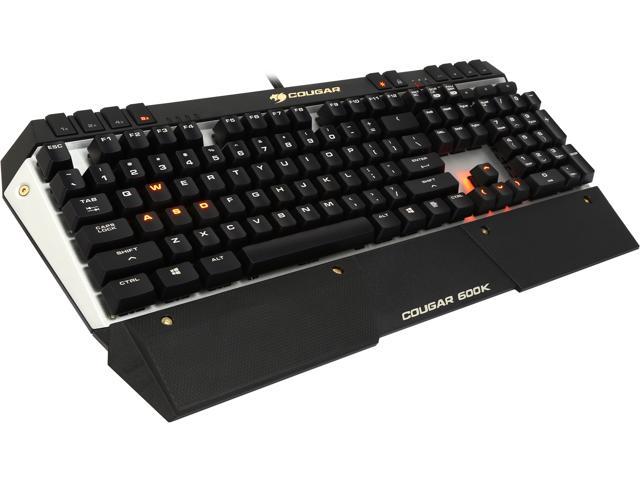 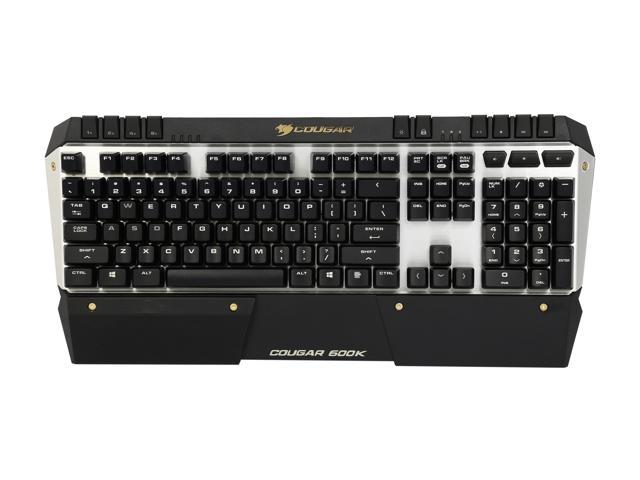 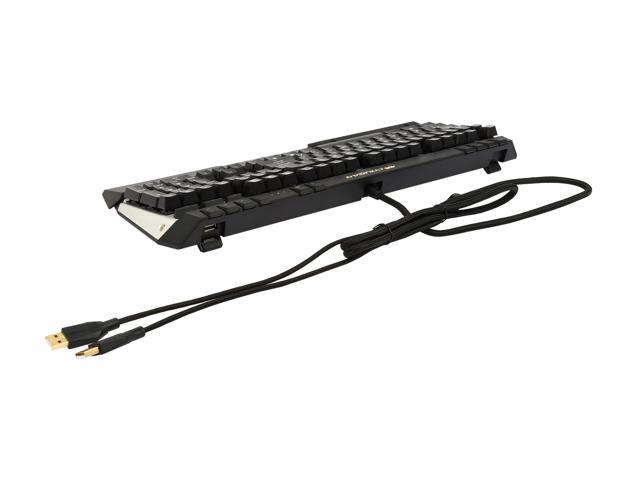 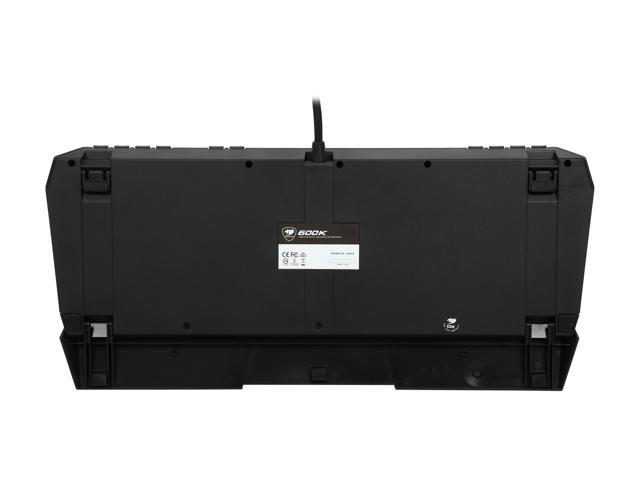 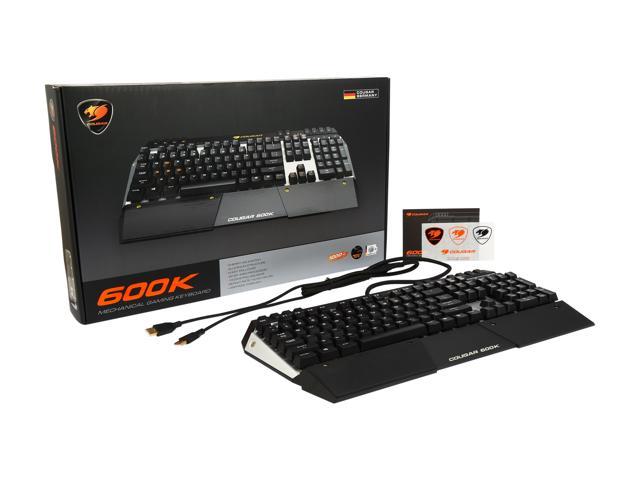 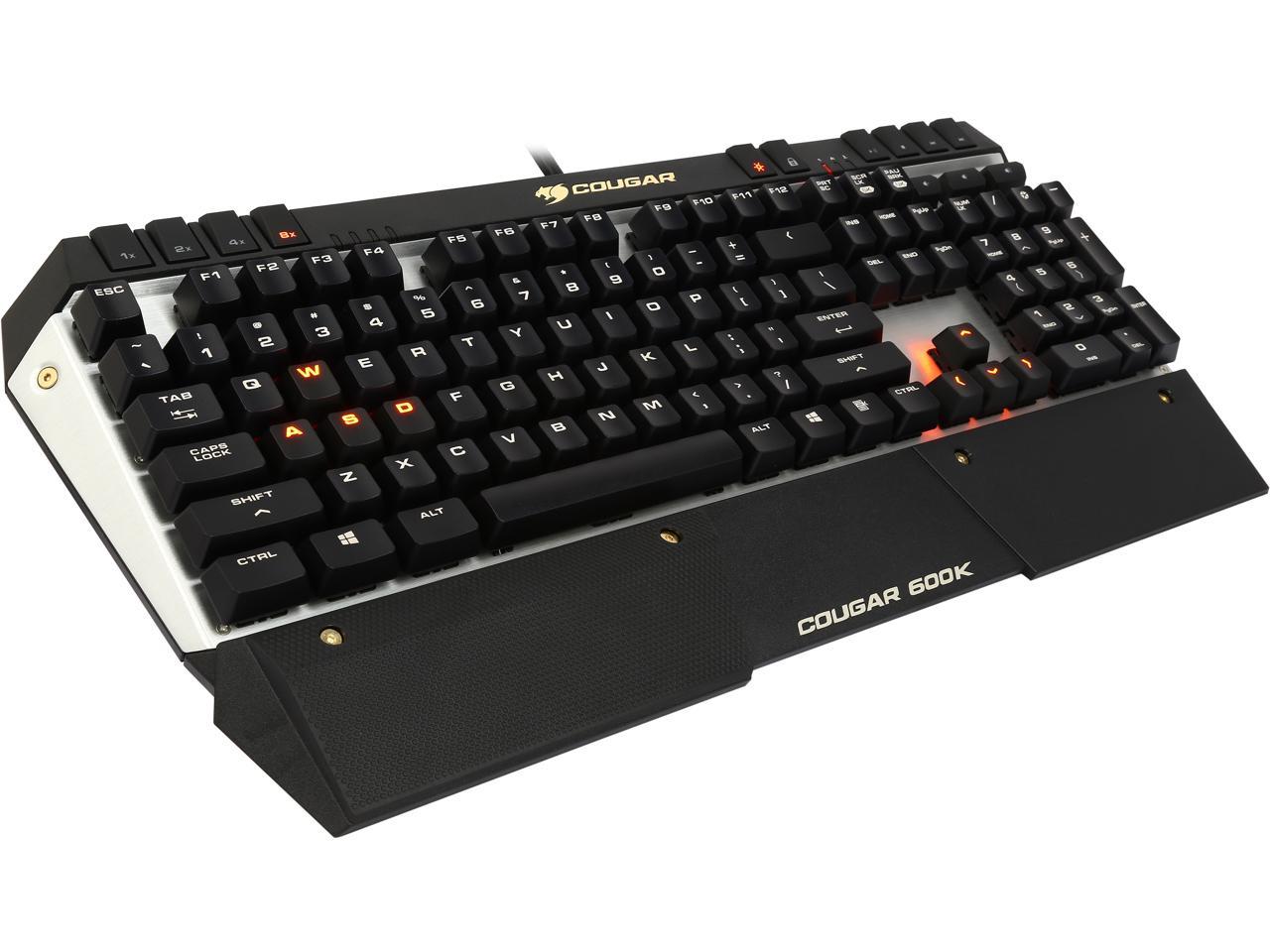 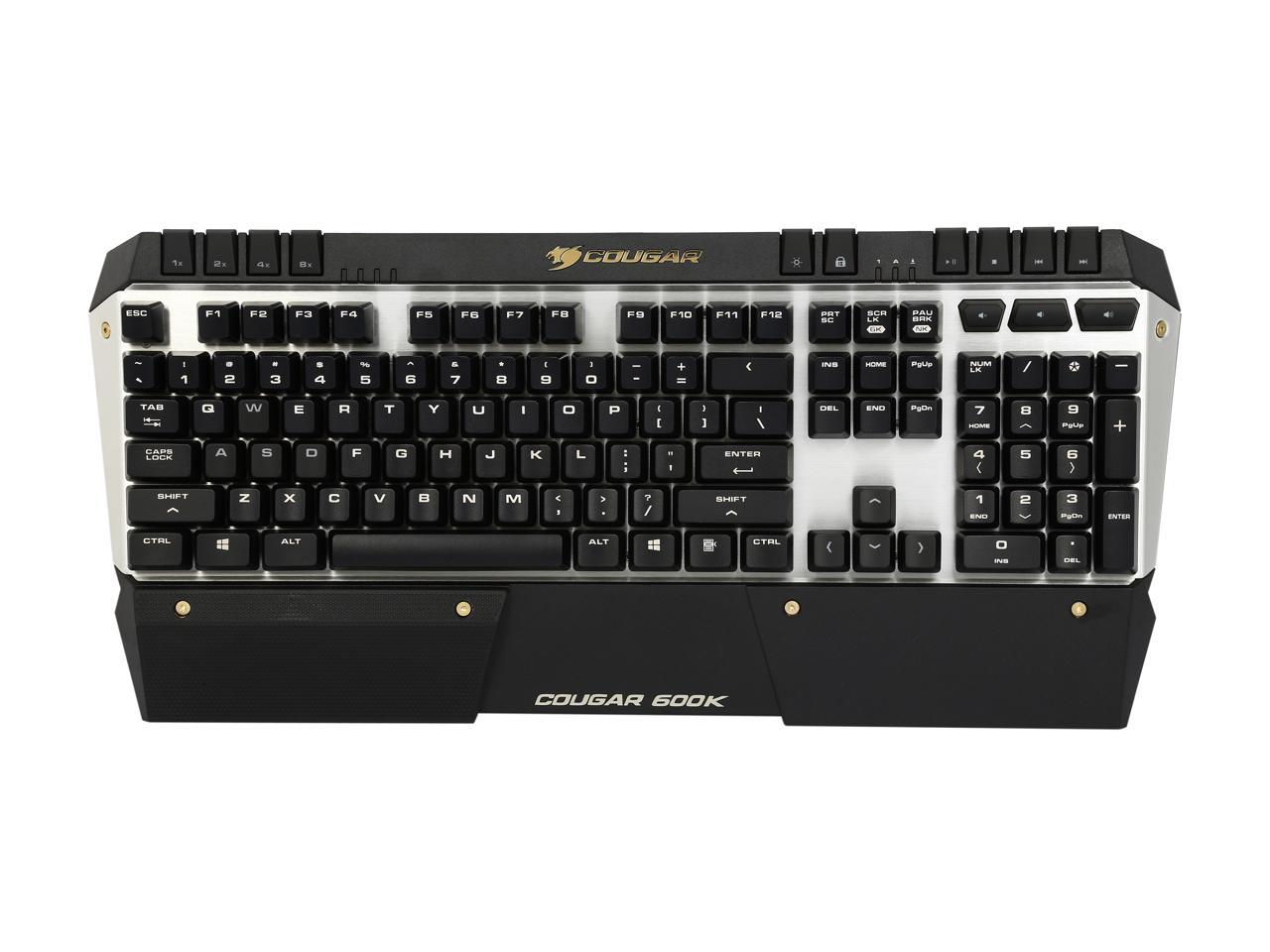 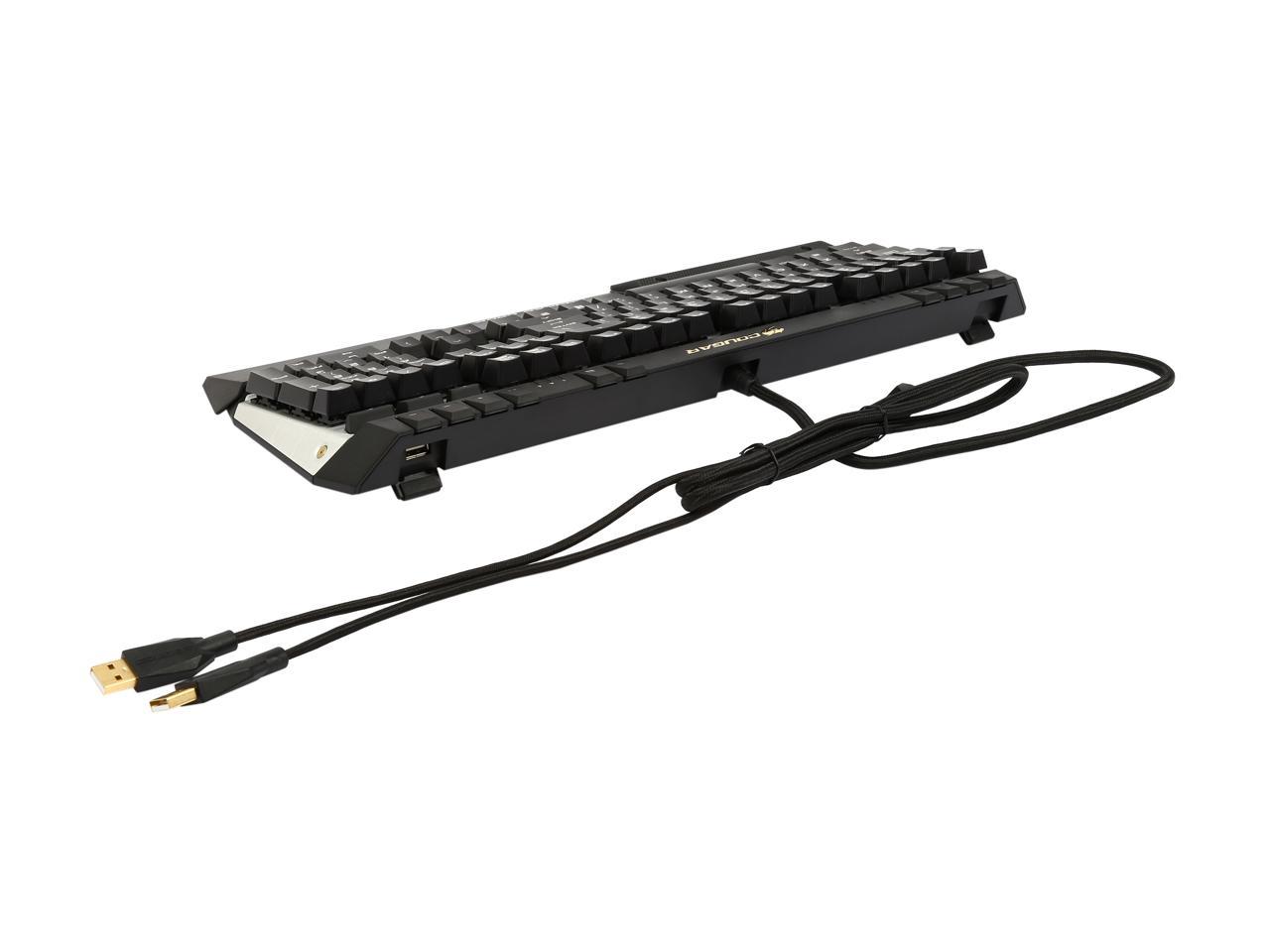 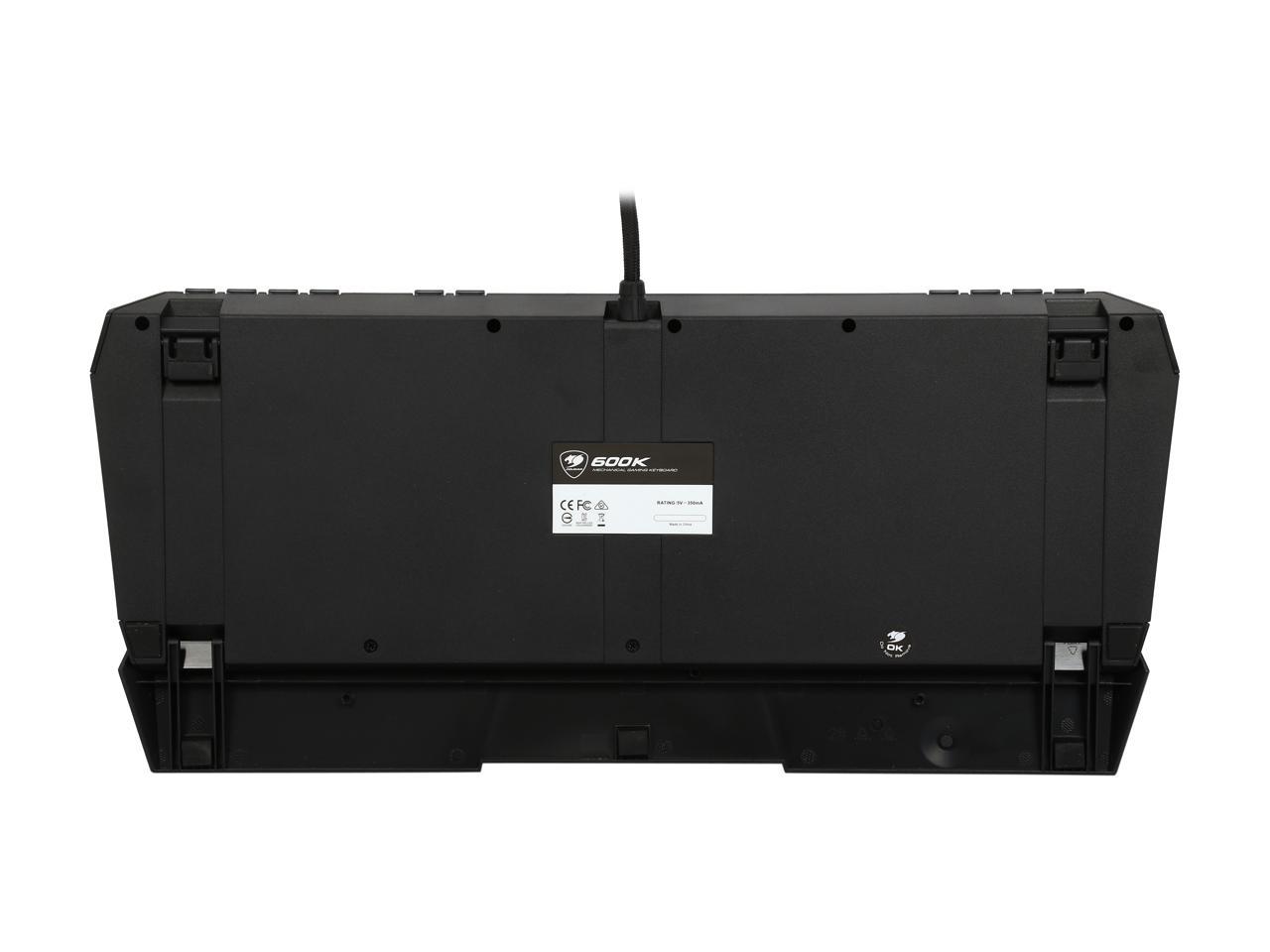 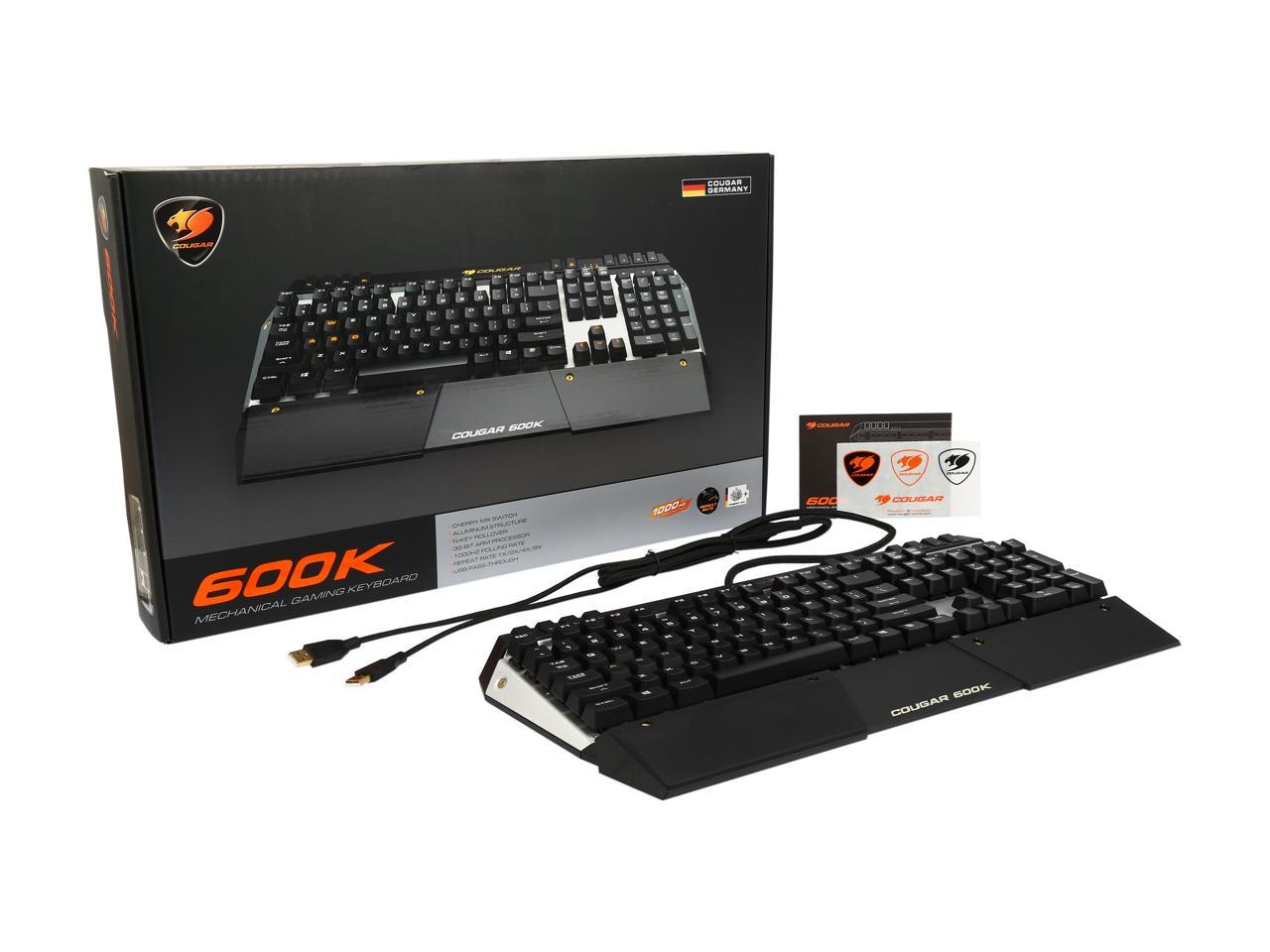 The COUGAR 600K is the best keyboard for those people who want a NKRO mechanical keyboard but do not need any of the additional functions that other high end keyboards usually come with. Only the standard keys, plus some core handy functions that don’t get in the way. All of this in an award-winning aluminum design inspired by the geometrical shapes of stealth warships’ silhouettes. No macros, no remappings, no setups. Just you and the highest quality keyboard available on the market. USB Pass-Through
Quickly connect your mouse or other USB device.

Both for the sake of design and for improving durability, the mechanical key modules are mounted on an exposed and bent aluminum structure with premium brushed surface treatments. This structure makes the keyboard sturdy and durable, and gives you what every keyboard should give you: a strong sense of being in command. The COUGAR 700K allows for quick adjustment of the repeat rate of the keyboard, especially useful for games which require pressing repeatedly a specific key. Protect yourself from injuries, gain comfort and improve your performance. Especially designed for FPS (but useful as well for other game genres) this detachable rubber palm support provides a strong grip and just the right height to effortlessly keep your hand in place during action. Learn more about the 600K

Pros: Great, fast response! Consistent pressure to press keys all around. Isn't too loud, and the silver look under the keys is really appealing to the eye. I also like that Cougar didn't overdo the lights; they put lights only where they should be which is great!

Cons: The only thing I might think twice about is the price. However, I'll take it that Cougar isn't the leading keyboard manufacturer in the industry, so it has to raise its prices to stay competitive.

Cons: So, bought this 32 days ago. 3-4 times it has made my computer unresponsive to using any keyboard that I connect(I have a wireless one also that does not work when this happens). I have to disconnect and reboot the computer(rebooting does not correct this). Once rebooted I can reconnect the keyboard and it will work for up to a week before this occurs again. The most recent time that it happened my browser was scrolling up/down, zooming in/out and jumping between pages. The issues started with the keyboard and only happens with this keyboard connected. I have a $3k build, so there isn't a lack of quality in my system. I'm finally frustrated enough to get an RMA and it happens to be 32 days since purchase. I guess I bought a $130 paper weight.

Overall Review: Do yourself a favor...spend the extra cash and get something of better quality. Live and learn I guess.

Pros: This keyboard is beautifully built. It feels, and is, incredibly solid with it's brushed aluminum case and strong, braided cords. Like all cherry mx switches, it just feels right. I actually got the blue cherry switches on this one, as it is a gift for my mother, who frequently writes and publishes books, and needed a better keyboard than she was typing on. Her reaction when she started typing on this keyboard was, "wow, this is the best keyboard I've every used," and given how many she has used in her lifetime, that is high praise indeed. She particularly liked the action and "clickiness" of the keys, shape of the actual keys, which are slightly concave to hug the fingers, and the fact that the keys are actually raised rather than sitting flush on the keyboard. Actually, I really like the feel of that, too. For myself, I also really like the fact that is a usb passthrough. Oh, and you don't need any drivers to get full use out of this keyboard, which is going to be a huge boon to my technologically illiterate mother!

Cons: For what I paid for this keyboard, I give it five stars. You'll notice that I've only given it four stars officially, however, and that is because it's MSRP is significantly more than what I paid. In fact, for only a little bit more, I think $10, you can get the 700k, which has full keyboard lighting (only orange), and several dedicated macro keys, though it has a split spacebar, which some people don't like. That doesn't bother me, so that is they keyboard I use myself, and I like using the macros for all sorts of things besides games. As it turns out, I got the 600k on sale for $80, which is a terrific price, but the MSRP is not exactly a steal. Also, I don't really like the fact that only wasd and the arrows light up. It's clearly stated that that is the case, and this is, technically, a gaming keyboard, so I understand why, but I just don't like it. I'd rather have all or nothing. I also don't understand why it needs two usb ports to enable usb passthrough (one for the keyboard, one for the passthrough). If they keyboard were running a huge lightshow or had all sorts of bells and whistles, I'd understand, but that's not the case here. It seems like they could easily have gotten away with using one usb port for both the keyboard and passthrough capabilities, but maybe that's just my lack of knowledge about the inner workings of the keyboard. No matter what, it's only usb 2.0, and I would love to have 3.0 passthrough. The only other "con" that I have about this is that I don't really like the media controls very much. They work fine, though the buttons are a little stiff, but I MUCH prefer to be able to control the volume by rolling a dial a la the high end Corsair boards, rather than keep pushing a volume up or down button.

Overall Review: This is a really good keyboard, actually better than the 700k for those people planning on using it for heavy duty typing. I highly recommend it for its exceptional build quality, especially if you can get it on sale.

Cons: Affter 40 some odd days the keybooard has started t malfunction. Sooometimes the letter o, fff, shift and few others will either not work or repeat themselves. i got an RMA# but the item is oout of stock. Not sure I would want another one even if it wasn't. prooblem is I dont have a spare to use while I find out how they are going to replace what they don't have and dealing with this while i move out of state is aggravating. Refunding my money was not an option .. go figure. This was my first mechanical keyboard and a nice potential upgradde for me. After spending $1000's at Newegg over the past few years I have to say I am not impressed with my first return experience. I will be thinking long and hard before I place another order here.

Overall Review: The ergonomic design will make this an excellent dooor jam.

Pros: The keyboard seems to be really well built. The version I bought has the CherryMX Brown switches. It really isn't any louder than my old keyboard. This keyboard doesn't require any drivers or set-up of any kind. I like the fact that I can remove the palm rest. I started with it attached, but have since removed it. It was comfortable, but it seemed to be causing me issues when typing. It could be that I'm not used to the keys yet. They are just a little smaller than my old keyboard. Overall, I would say for the price I paid, I got a really nice mechanical keyboard.

Cons: While a lot of people may say the rubberized feet are nice, I find it a bit annoying. Every time I want to move the keyboard, the feet grab, and the top feet collapse. Not a real big issue, but enough to annoy me. The palm rest that comes with it is very nice, but in the center when attached, it bows. It seems to need a little more support

Overall Review: This is my first mechanical keyboard, and I have not been disappointed at all. It seems really well built, and typing isn't really a bit change from the membrane type of keyboard. I love the feel of the keys when typing. You can really tell when they have been activated. If you are looking for your first mechanical keyboard, give this one a try. I think you will be impressed. It doesn't have all the back lighting and some of the other features, but it does what it was designed to do, and at a pretty decent price.

Pros: The awesome aluminum top plate, mx red switches, orange back lighting on the typical moment keys, gold plated connections, usb pass through port on the keyboard, nothing wrong with this keyboard and from what I've seen its always on "sale" its an absolute steal.

Overall Review: when your playing games make sure to have the setting on 1x and nothing else cause it thinks your pressing the keys super quickly other than that there was nothing i ran into but thats not a con. great keyboard great price.

Overall Review: This is my 1st mechanical keyboard and I didn't know what to expect when getting it as the only other keyboard I have tried was the corsair K70 Cherry mx reds. Since the switches were cherry mx black it almost felt like a membrane keyboard so I felt right at home compared to trying it cherry mx reds. I definitely noticed a difference in response time and because of that the keyboard is able to determine very minute difference in pressure making it so I can do commands such as alt+tab faster. Soundwise my 5 140mm fans going at full blast pretty much overshadows this in noise so I don't really notice it that much. Also I use headphones so that also explains why I don't really hear the sound.

Pros: Gorgeous Highly functional Plug and play, no driver downloads or installs Excellent fit and finish for an aluminum inset in plastics design The adjustable hand rest is stable and comfortable

Cons: The beautiful rainbows that I see always emanating from it 'do not' end at a pot of gold.

Overall Review: Cherry mx blacks are a bit firm at first but like a steinway piano, once you are familiar with it, the weight adds confidence to the keystroke. I waited until this came up in a sale on newegg. Having used it, I kinda wish i just got it months ago..