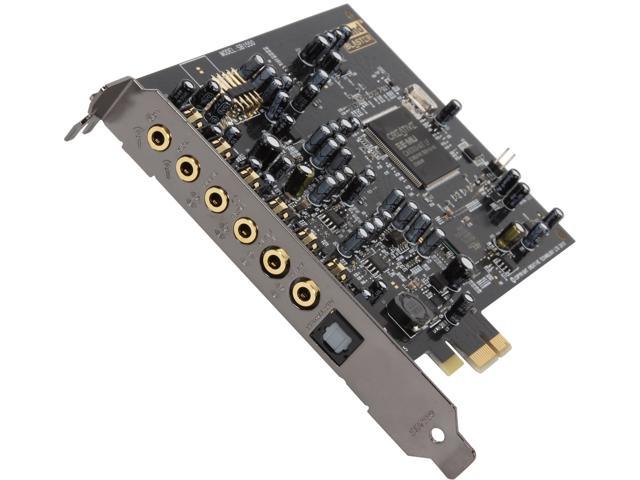 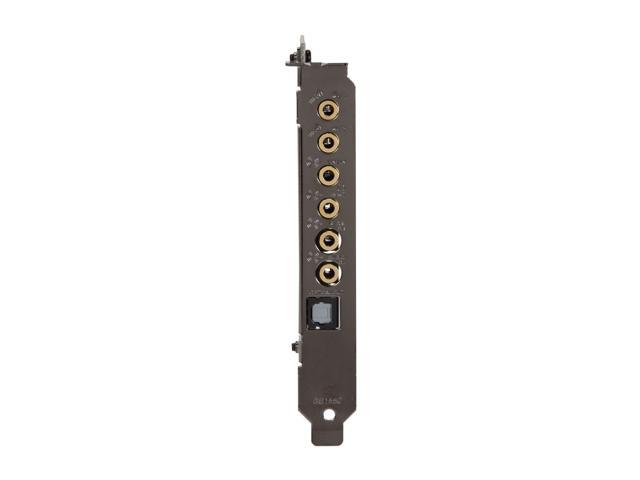 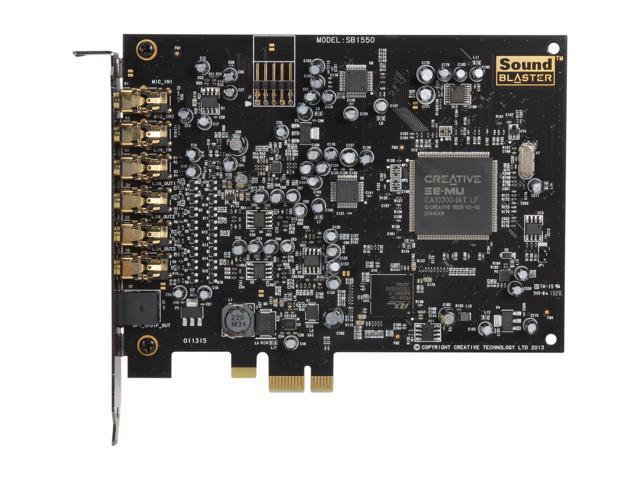 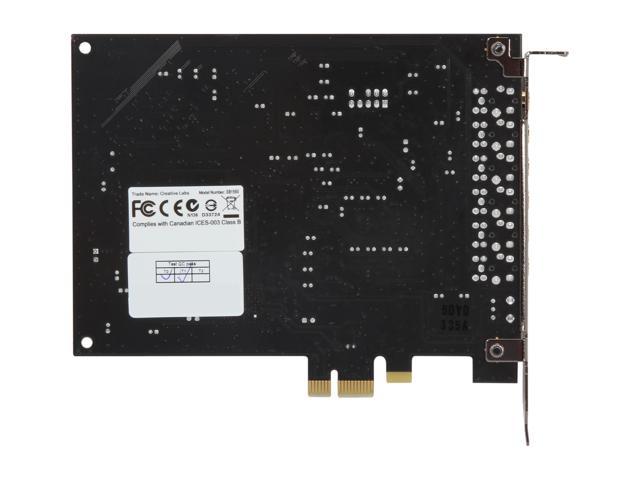 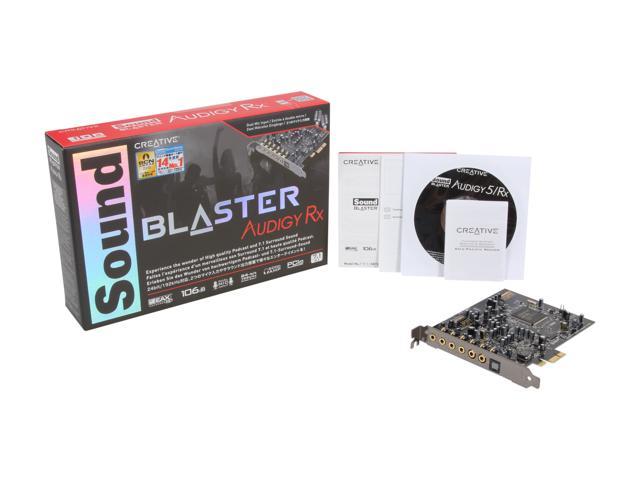 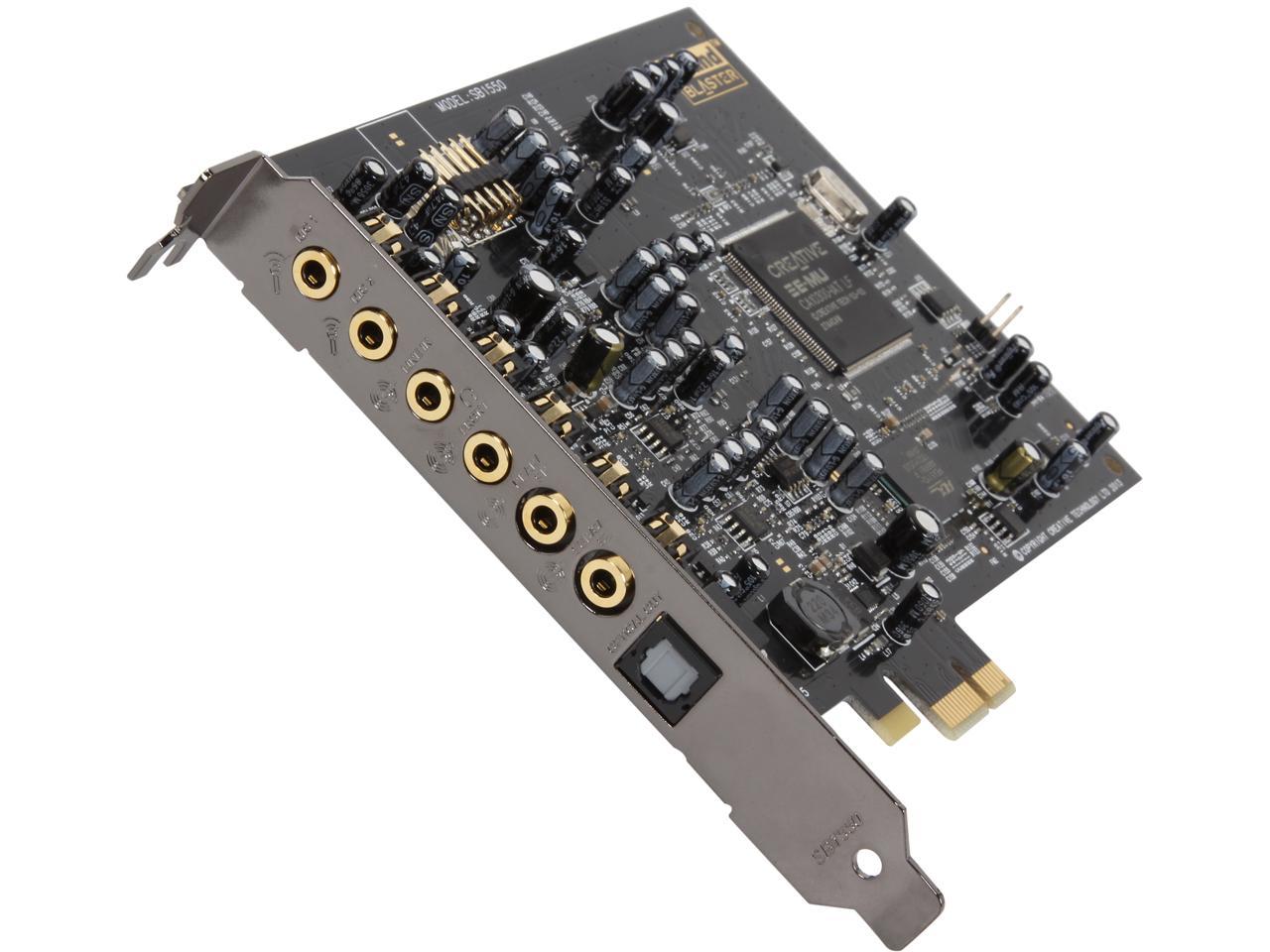 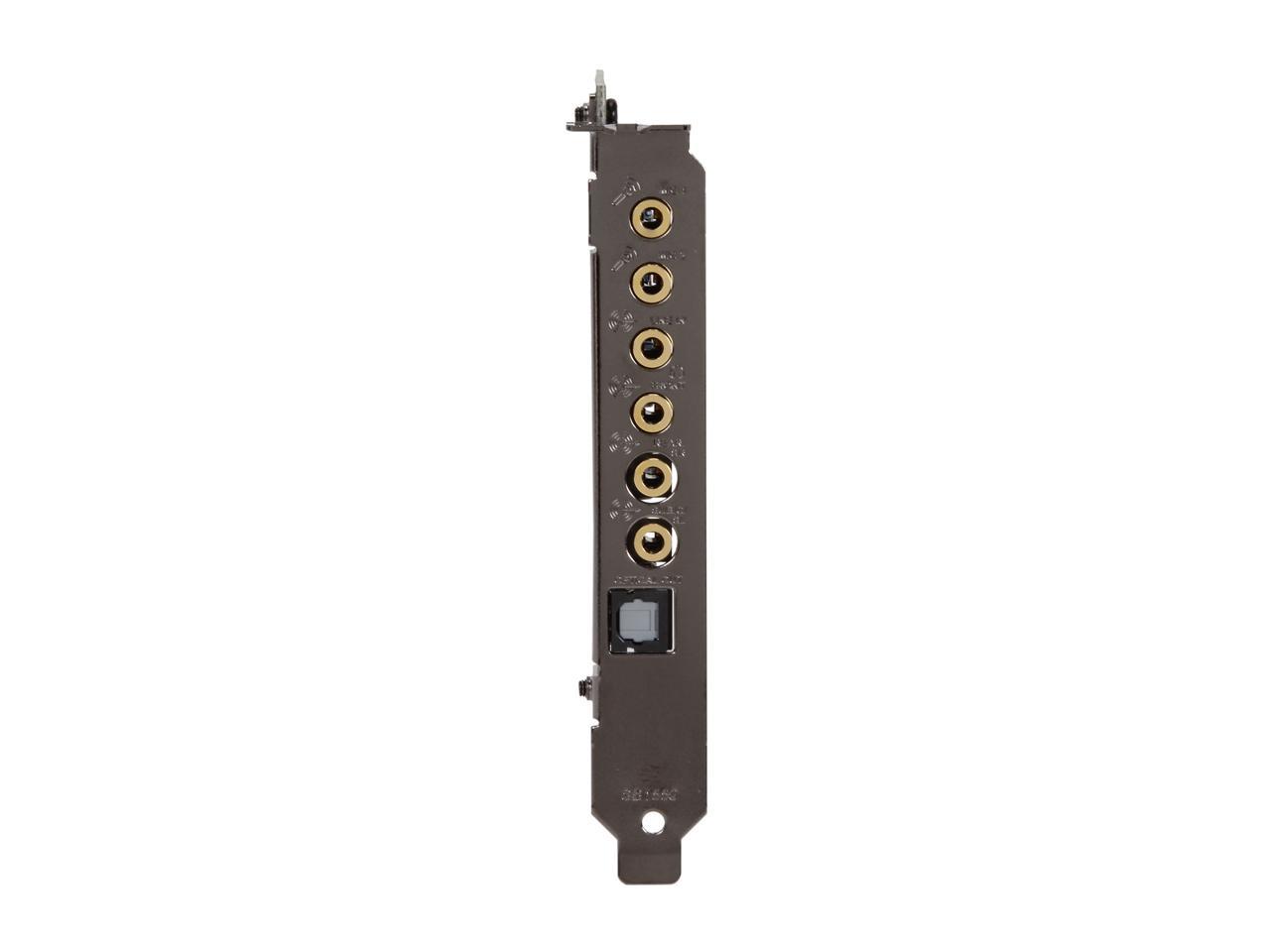 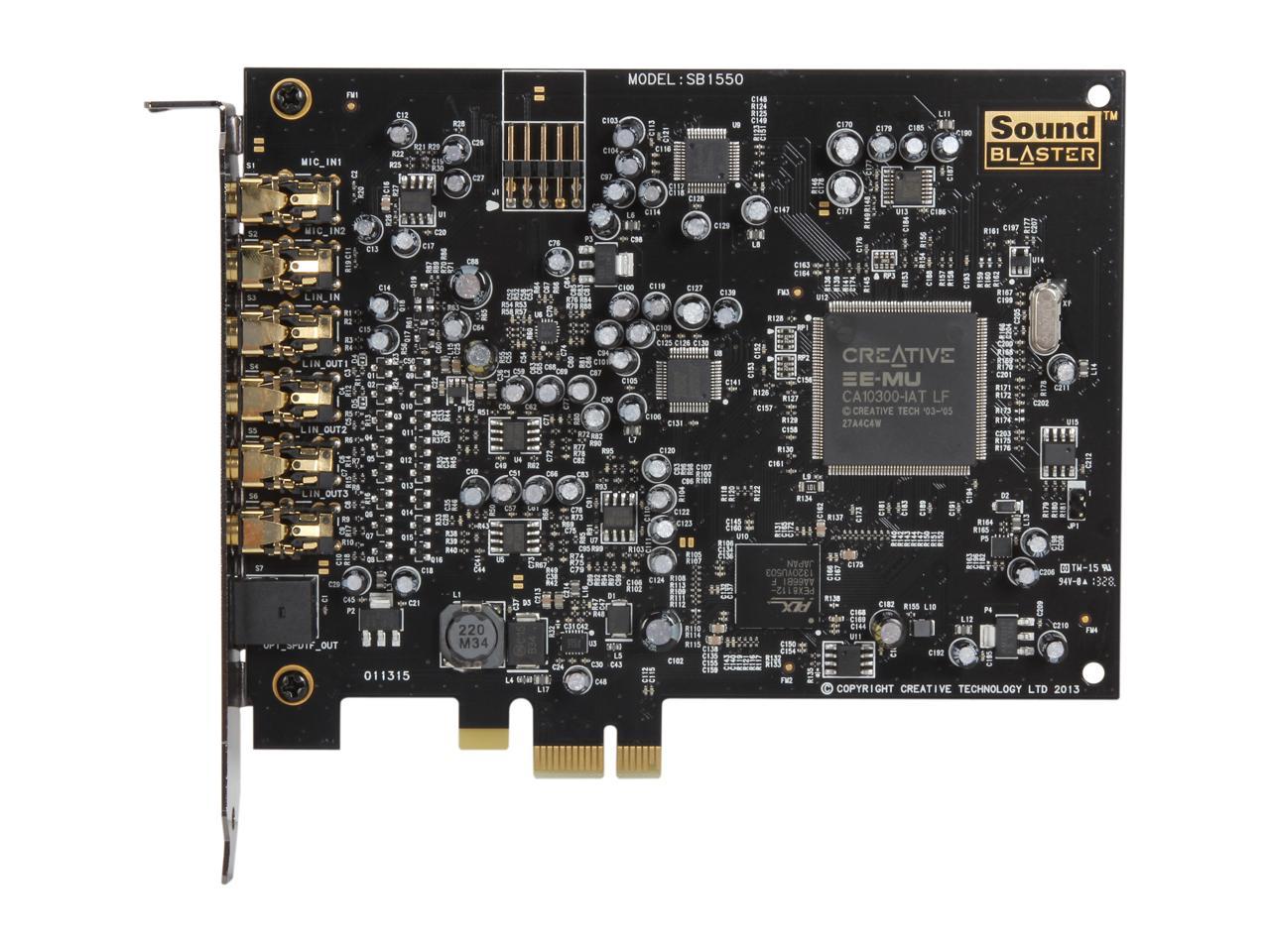 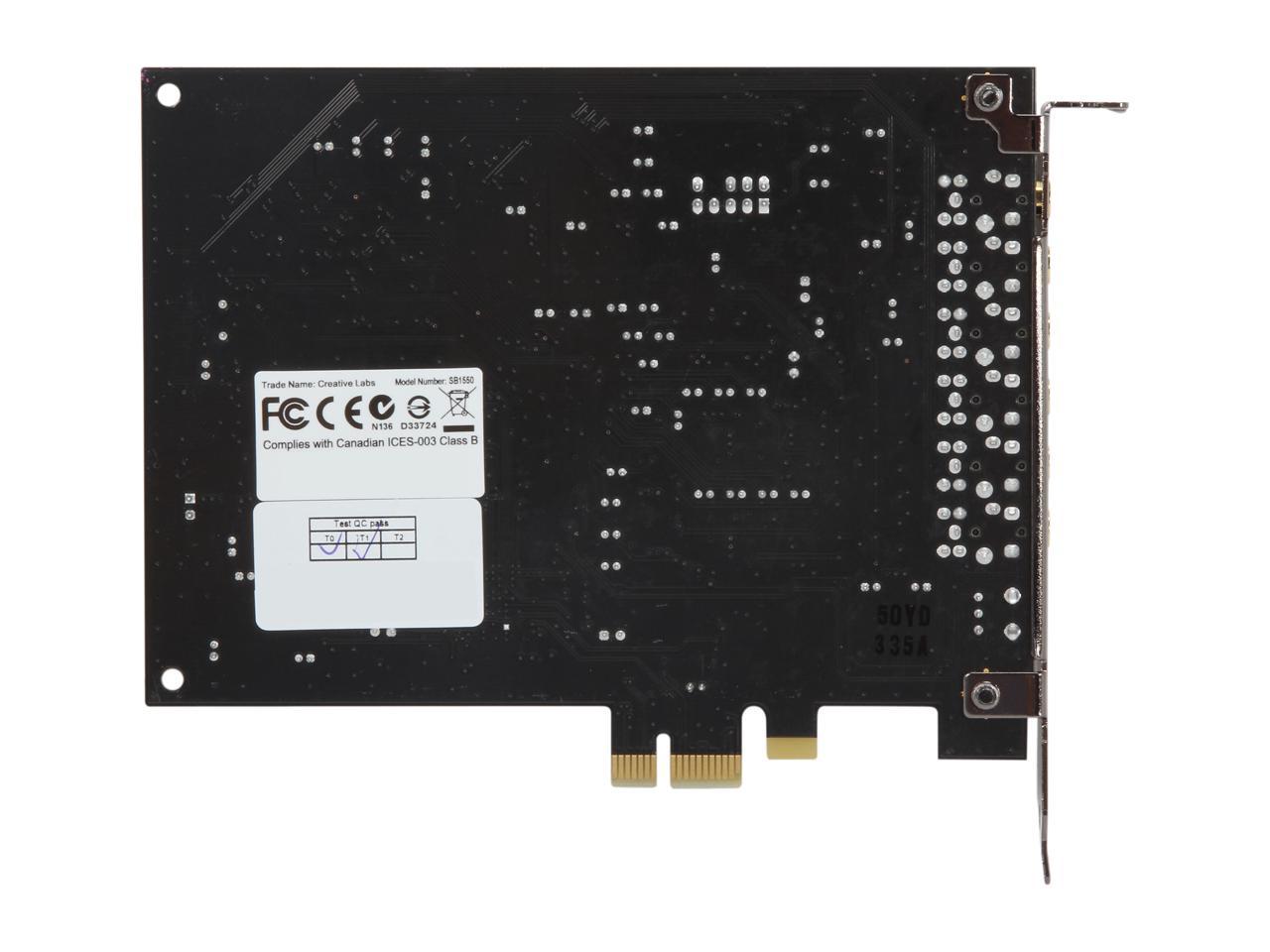 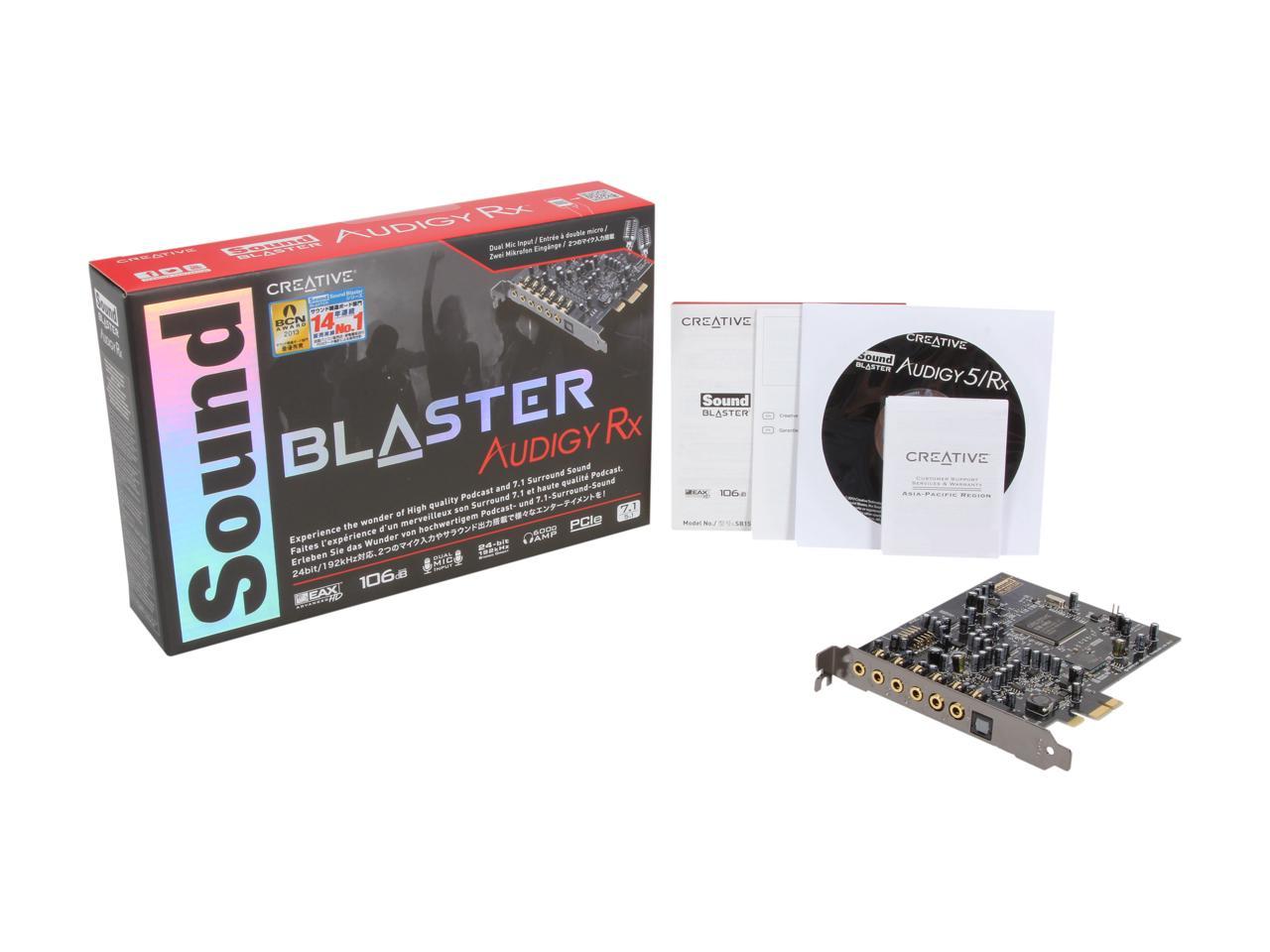 Enjoy premium Sound Blaster audio quality over and above basic motherboard audio with a Signal-to-Noise Ratio (SNR) of 106dB. Plus, Stereo Direct lets you listen to your music pure and unprocessed at the amazing bit rate of 24-bit 192 kHz.

The Sound Blaster Audigy Rx also lets you enjoy a truly cinematic experience, supporting up to 7.1 multi-channel speaker output. It gives you an immersive, cinematic audio experience for your movies, games and more!

The Sound Blaster Audigy Rx is an advanced sound card that represents the perfect upgrade from basic motherboard audio to immersive cinematic surround sound. With its advanced chipset designed to process the legendary EAX reverb engine, you can look forward to experiencing superb 7.1 multi-channel audio. It also features an SNR of 106dB and the Sound Blaster Audigy Rx Control Panel, a piece of dedicated PC software that allows you full control of every aspect of your sound card.

If you're big on entertainment, you would also love it for its EAX Studio software that allows for additional hardware-accelerated environmental effects to your music, movies, games as well as for your voice input and communications. Sound Blaster Audigy Rx features the Creative E-MU chipset, which was designed to process the legendary reverb engine EAX (Environmental Audio eXtensions) and deliver amazing cinematic audio playback effects without having to bog down your CPU. This ensures you get great quality effects and audio without affecting your computer's processing power. The sound card has two microphone inputs to allow you to grab a friend to sing simultaneously! Or, use the second input to record the music accompaniment while you sing. The possibilities are endless!

With the 600-ohm headphone amplifier, the Sound Blaster Audigy Rx is able to drive the most demanding of studio headphones. Keen to get started on recording right away? Sound Blaster Audigy Rx comes with recording software such as Creative WaveStudio and Creative Smart Recorder, so you can create your content immediately!

Control and Customize Your Audio

Sound Blaster Audigy Rx Control Panel is a dedicated PC application that lets you control and customize every aspect of your sound card. You can adjust your Creative Multi Speaker Surround (CMSS or CMSS 3D) settings to upmix stereo content to your multi-channel speaker system and add acoustic depth to your multi-channel content. Or, use Mic Monitoring and Stereo Mixing to hear yourself while you record and so that you can hear the effects instantly.

The powerful EAX Studio software lets you control and perform detailed adjustments to all of the EAX Advanced HD settings such as adding environmental effects to your music, movies and games, or change the key of your music on the fly to match your voice.

Cons: There's a little bit to figure out and to fine tune using ASIO drivers.

Overall Review: This card is completely compatible with ASIO drivers but you have to turn off some features like CSSD 3D sound. I only use 2.0 output straight to a 1200 WATT dual speaker, mono PA system. My drums sound way more authentic and extremely powerful. Best soundcard I've purchased since 1999 when I bought a Sound Blaster PCI-16. Just get the right driver through Creative's site for Win10, work with ASIO through input and MIDI settings and find that sweet spot in the sampling list. Perfect card for this type of use if you want an improvement in sound quality over on board sound.

Pros: I'm a long time sound blaster user, going back to the ISA cards mid 90's. Loved the SB Live and XF-I cards. When I was migrating from the XF-i cards to the newer gen sound blasters I went with a Z card initially, I hated it. I went right back to the tried and true SB XF-I cards that I loved, they just work. They stopped selling them so I got adventurous again got this sound blaster Audigy RX. The problem with the Z card was that it was just too complicated for its own good. If you have several hours and want to tweak the EQ and make it sound good, knock yourself out. But I prefer the old fashioned works out of the box with slight adjustments to the standard windows Bass/Treble etc controls. The RX fits the bill and sounds almost exactly like the XF-I cards I loved. I had two computers setup and hooked up to the same speakers, one setup through and XF-I the other through an RX and just bounced back and forth between the two on a single track, and I could hardly tell a difference. There are some new features with the RX though, which is good. A few minutes of setup and it was perfect. Very clear sound blaster audio like I expect. Been using them for 20+ years and I love it when they get it right.

Cons: Not really any cons, the internal audio hookup for the front panel connections was moved from where it was on the XF-I cards, I think the XF-i cards had it right.

Overall Review: Supermicro X10SRi-F-O, Intel E5-2620V3, PNY VCGGTX7602XPB video card, WD2000FYYZ Hard Drive, (2) Samsung Memory M393A1G40DB0-CPB, Supermicro SNK-P0050AP4 CPU Heat Sink, LG BH16NS40 DVD drive, (2) Noctua NF-S12A-FLX fans, (1) Noctua NF-S12A-PWM fan/Windows 10 Pro/64 bit, Corsair AX860i power supply. The Audigy Rx sound card had significant compatibility problems with Windows 8.1. Most, if not all, of the issues appeared to be resolved in Windows 10 and with the Creative Labs issue of updated drivers. For those that use the Midi features, even the Soundfont Bank Manager and Vienna appear to work properly in Windows 10. I have briefly tested the card with Cubase 4 (64 bit), and with up to date demo versions of Pro Tools and Sonar Professional and have been able to use audio input, output, latency and sound font features of the card. Configuration of the card in these software packages, however can be trying and there may be other limitations based on the software and the configuration. One last note - the new Windows Media Player kept defaulting back to the GMS built into Windows 10. But, my most recent trial of Media Player midi features indicates that the Audigy Rx sound fonts are finally being utilized. This may be a Microsoft/Media Player issue in that Microsoft appears to be abandoning and/or scaling back Midi and sound font technology.

Cons: At this price point, I am always hoping for more control for each frequency, much like a full equalizer from back in the day.

Cons: - Weird software included has some strange, non useful features - Confusing placement of the front audio jack connector - Poor labeling on the back for connections

Overall Review: The front panel I/O connectors share channels with the stereo speakers & one of the mic inputs, so note that if you intend to use headphones you must turn off your speakers too.

Pros: Ease of installation, great sound quality, setup and adjust ability was a breeze. Easily switchable between this and system sound if needed but I don't think you would need to.

Cons: Connecting to the front panel was easy but would not mute external speaker system when headset was used.

Overall Review: After upgrading my desktop os, lost the ability to do one thing I love to do and that is to play music on line in chat rooms. So I got this to give me the options needed to play again. After installation and setup, I'm back to playing tunes again and enjoying working on becoming an online DJ lol !!! Thanks so very much

Pros: Low latency hi-res hardware based sound processing/recording. Supports true ASIO 2.0 WITH live monitoring. Solid realtime live effects processing and "soundfont" compatible midi synth are in hardware. Heavy tasks are not remotely troubling my CPU. My Xonar cant do this. The drivers are solid and the card's full functionality is recognized by all of the recording/DAW software I have tried.

Cons: The software bundle is weak. Actually quite lame. If you want a "Karaoke Card" (does anybody really want this?) it might be terrific. Podcasters will also find some benefit to the effects processor and simultaneous input recording/monitoring. The rest is all fluff. The front panel jacks are shared, not switched. This is a pretty big con that doesnt affect me much since mine is a headphones-only application.

Overall Review: This is in many ways an Audigy 4 with a PCIe interface tacked on, so its 10-year old tech. But its good tech, and I don't need a full-on fancy/expensive recordists card. This card was DESIGNED for recording back when, but is not currently marketed that way. Pity. For gaming, or home theater, I would not pick this. For home recording for the non-novice on a budget, it has been PERFECT; a lot of bang for the buck. The FX version of this card DOES NOT use the same tried and true EMU chipset. The RX and FX cards aren't remotely related, so cant really be compared for value.

Overall Review: Shame on me for not reading the fine fine fine print and then thinking that the pictures in their online manual were of, you know, real cables. Nope. They're not for sale anywhere I can find, they ONLY come with their speakers, and that's it. Here's the deal -- if you have a Creative speaker/amp then you're in luck - they seem to come with the proprietary cables that are needed to actually hook up 7.1 audio. Problem is that I've got Razor's Tiamat 7.2 Headset. I'm not going to waste my time buying 4 more cables and rigging up some work around for Creative's horrific design choice on this card. Think about this: There are TWO Microphone jacks, AND a line in. Then they went with 2x 4-Poll 3.5mm jacks and 1x 3-Poll 3.5mm jack that handles all 8 speaker channels in a 7.1 setup. Worst. Design. Ever. I gave Creative another chance after 5 generations of Audigy thinking it was time to see if they've gotten their game together. I'm fully disappointed. There won't be a next time.

22 out of 28 people found this review helpful. Did you?