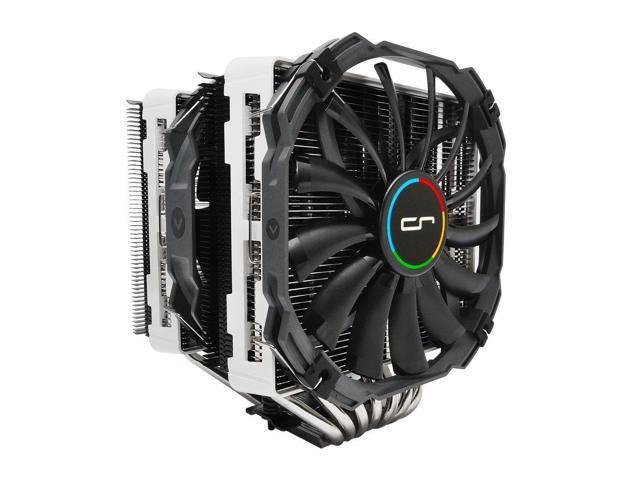 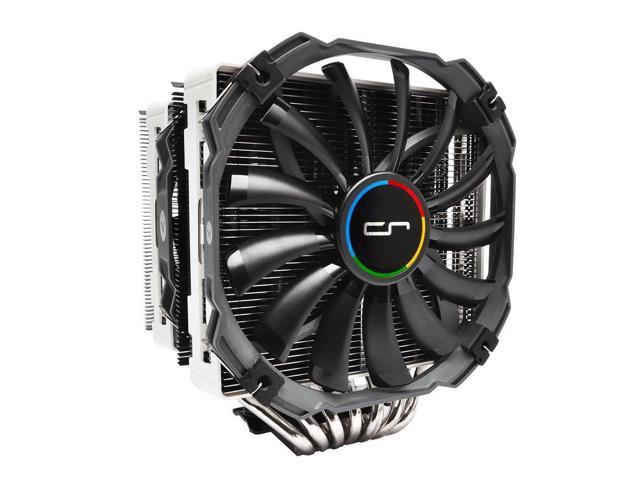 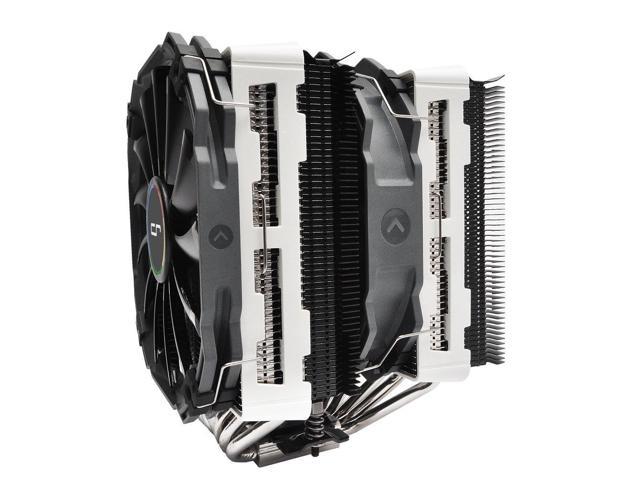 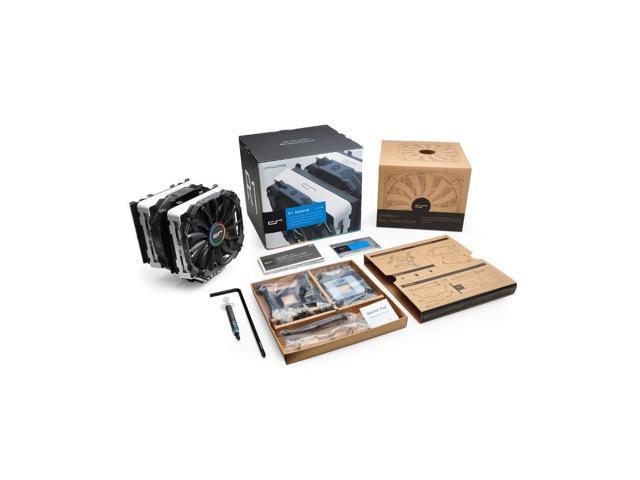 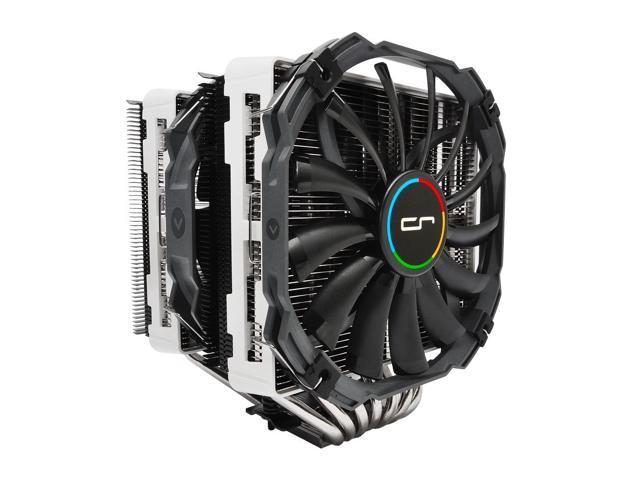 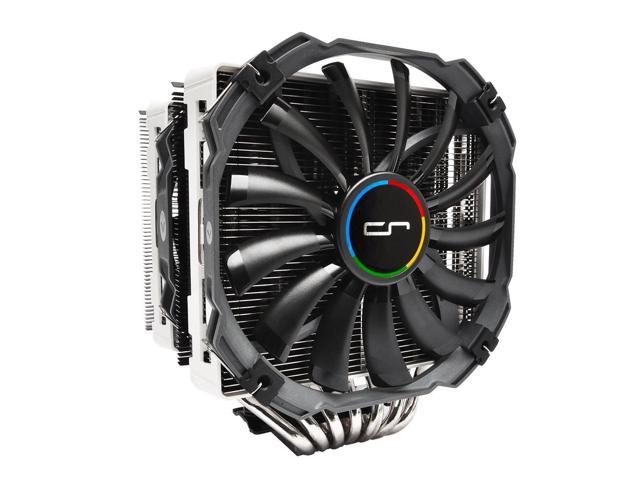 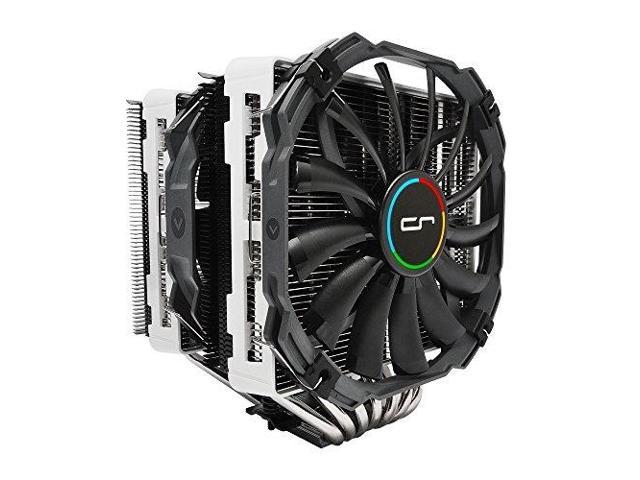 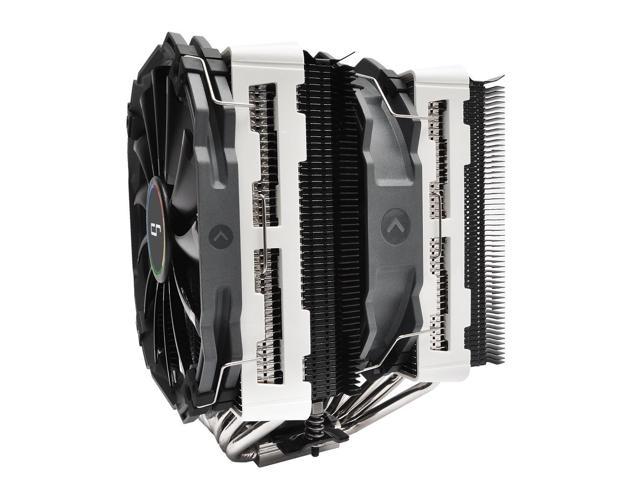 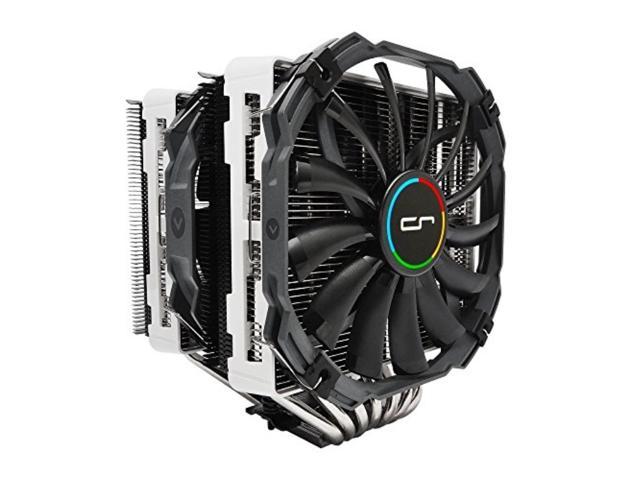 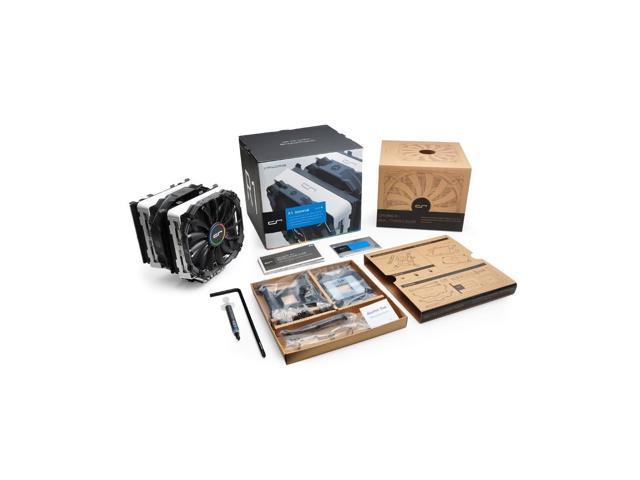 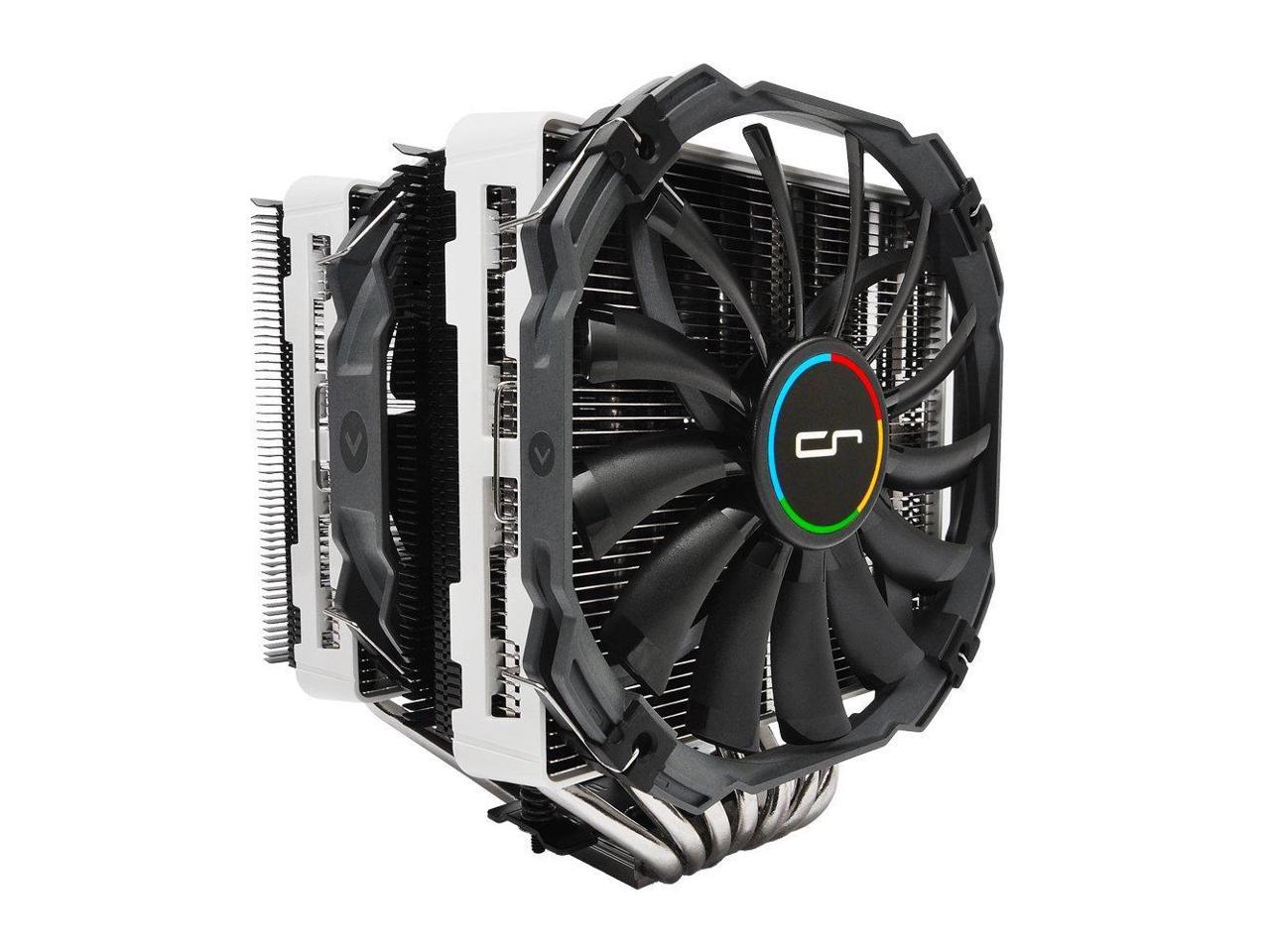 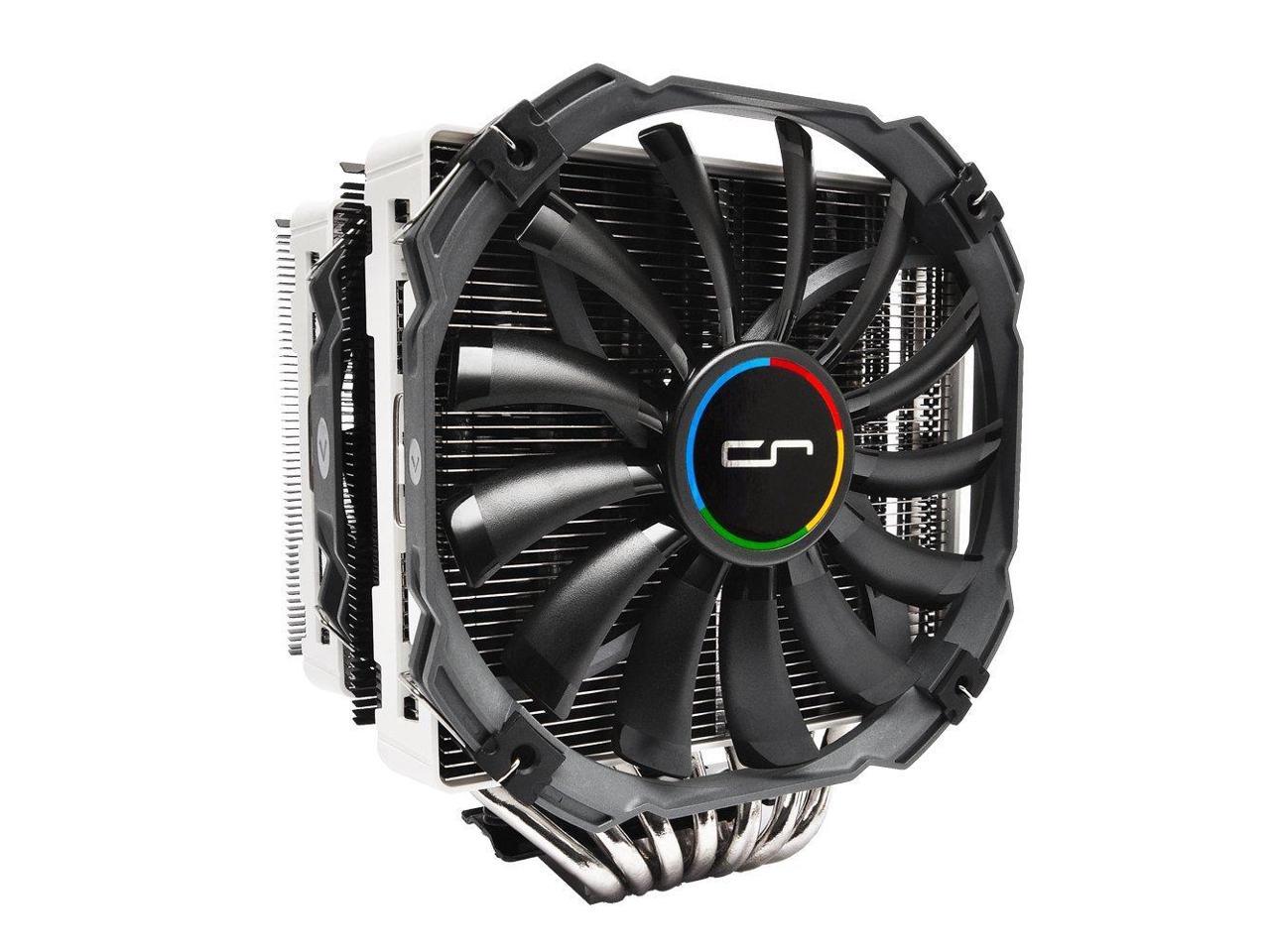 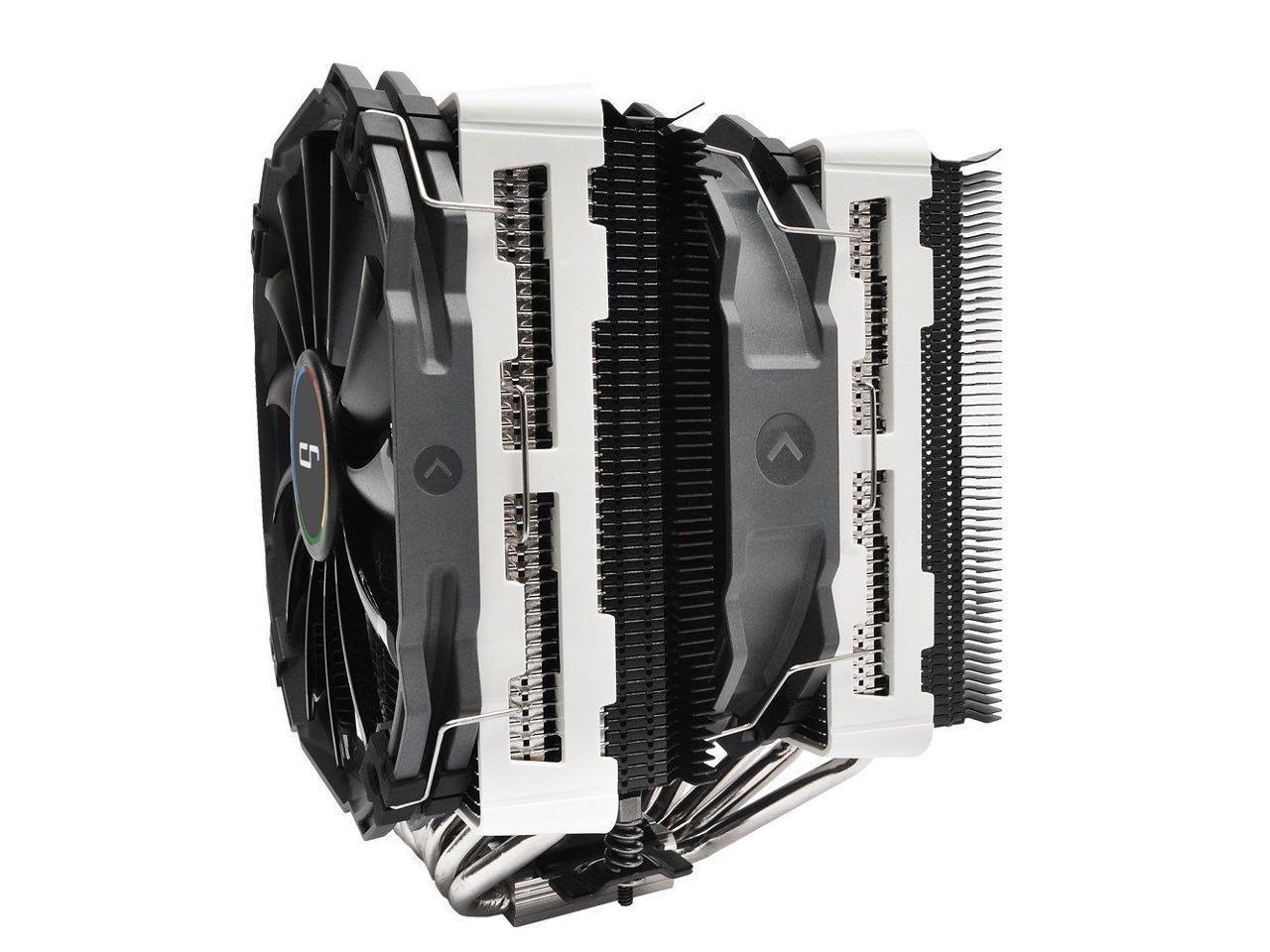 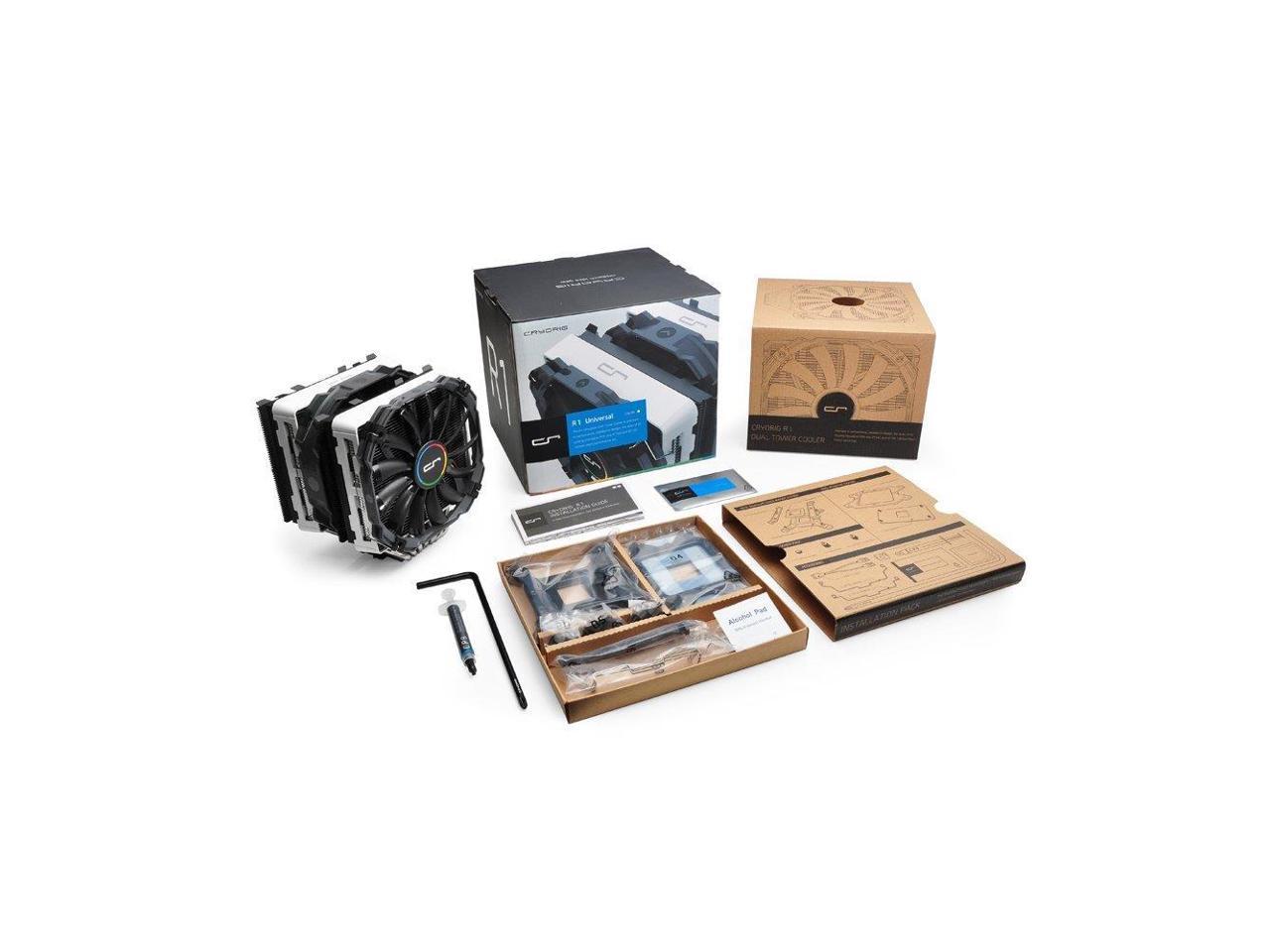 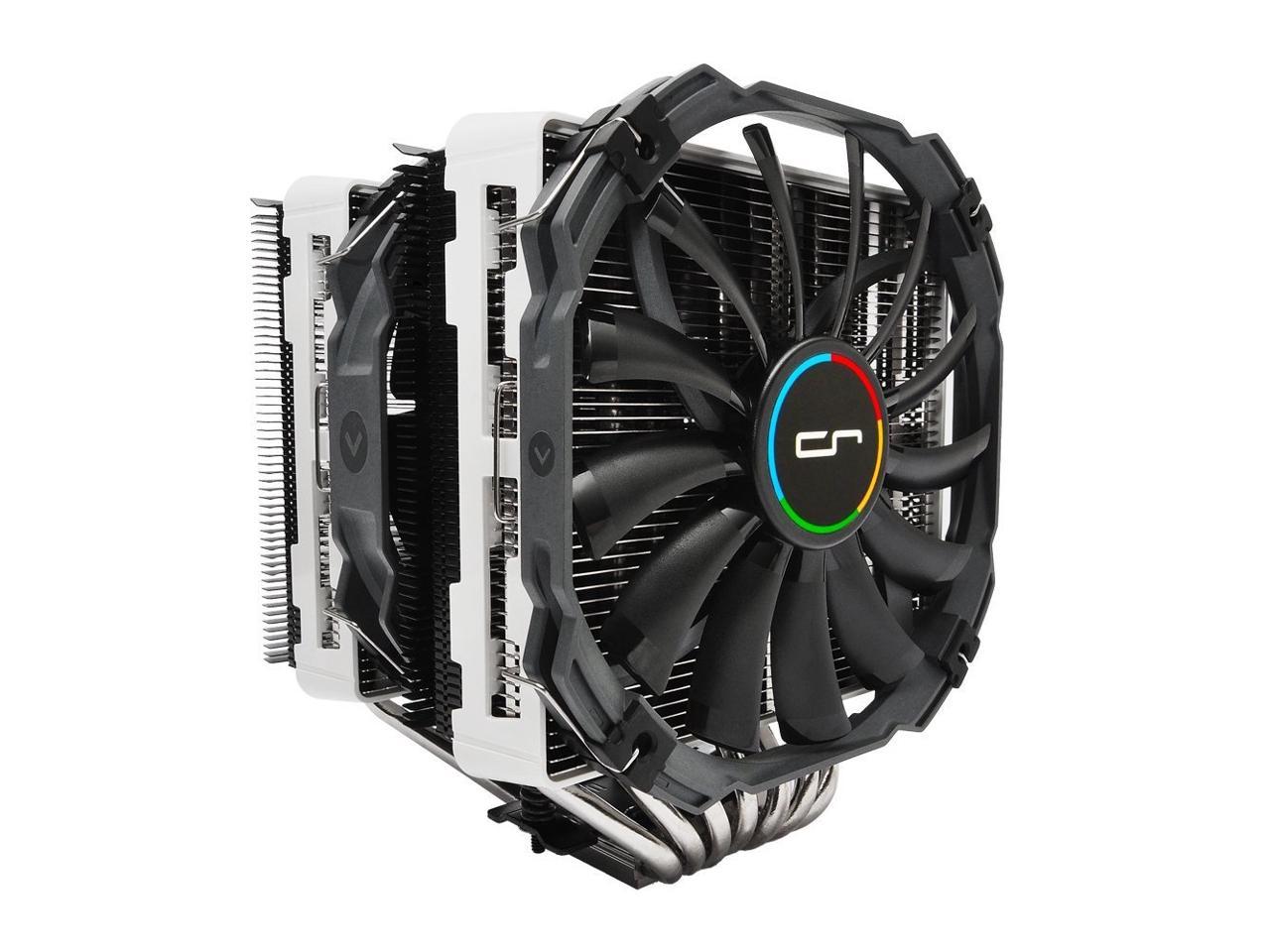 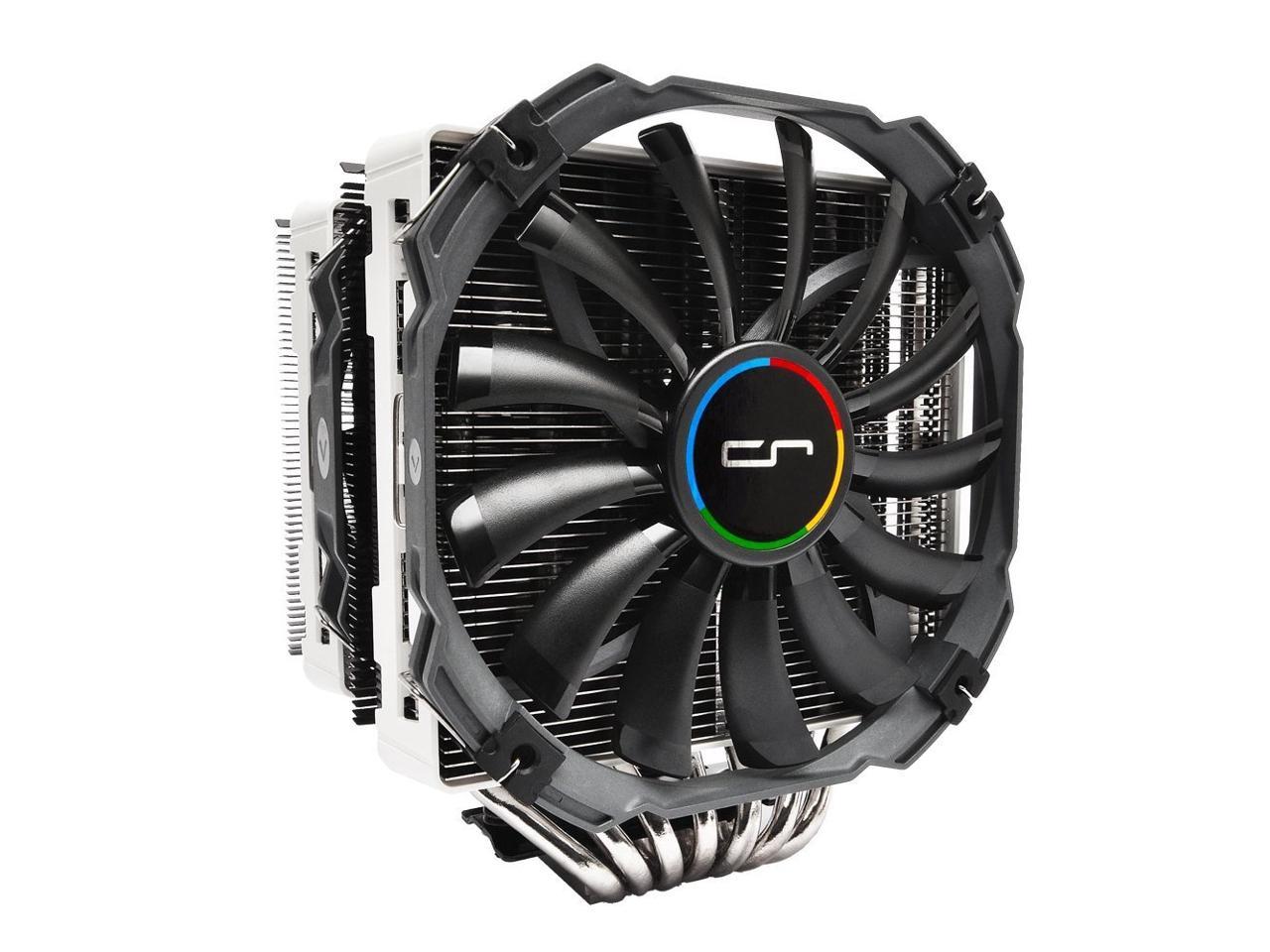 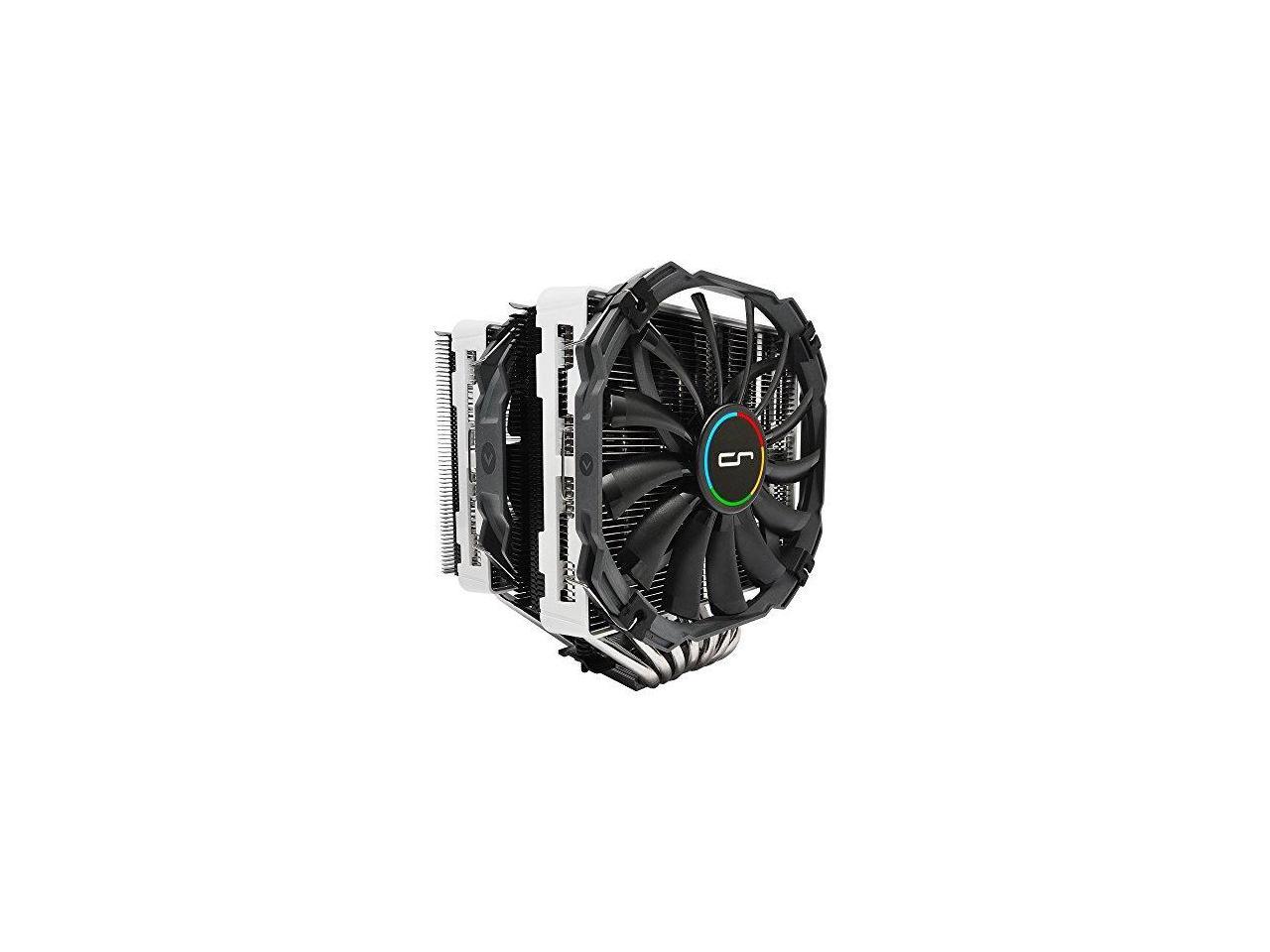 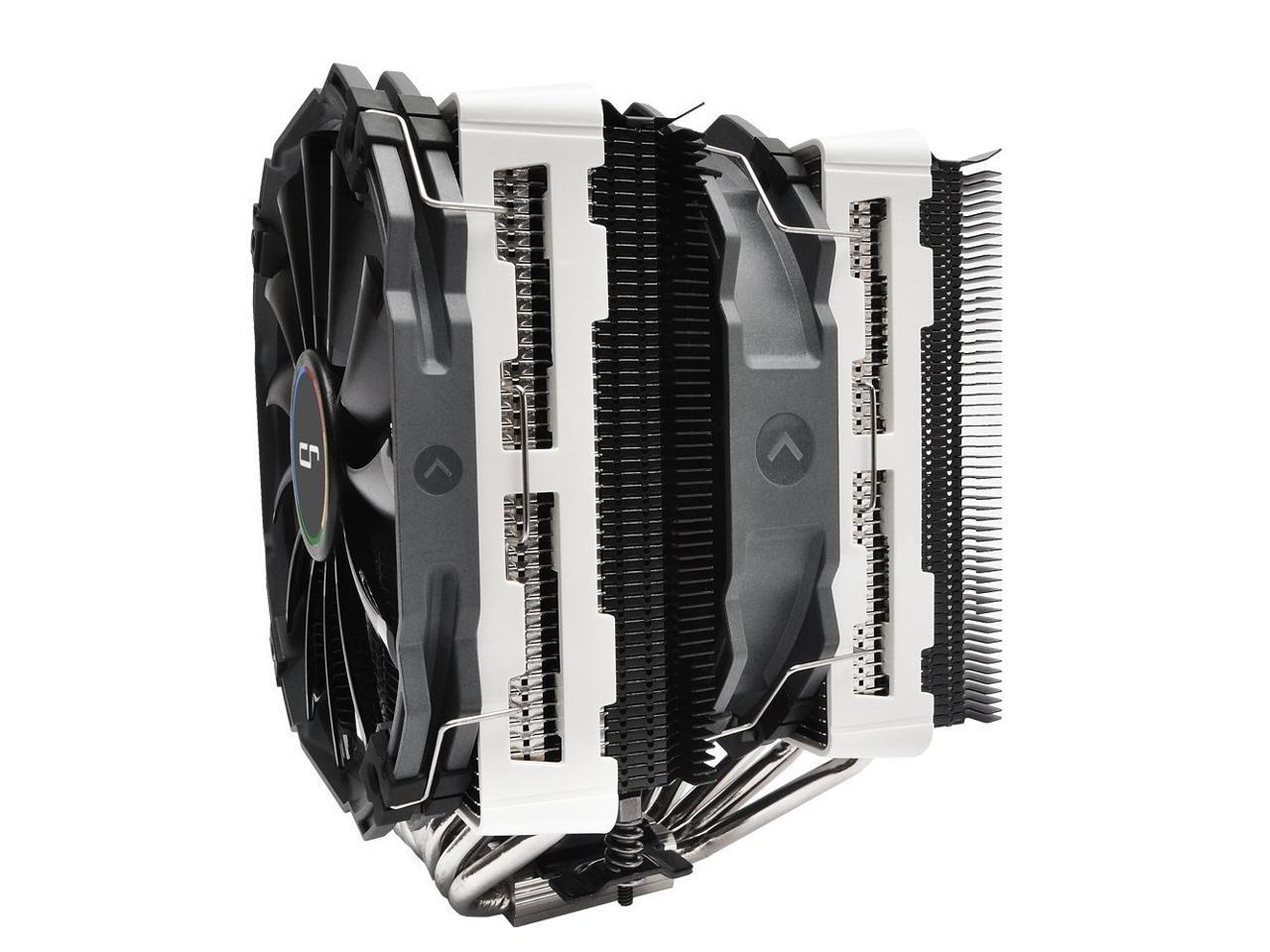 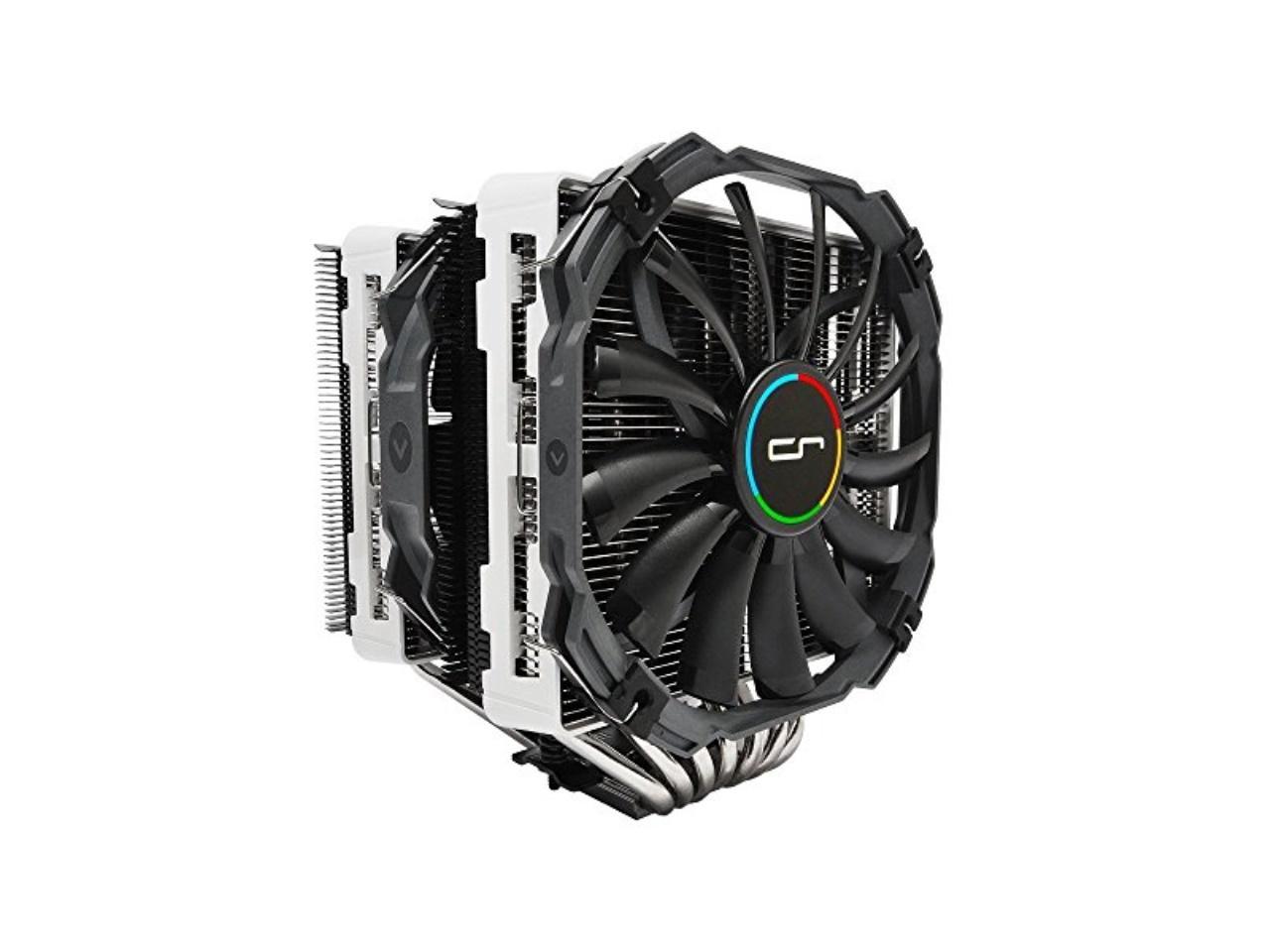 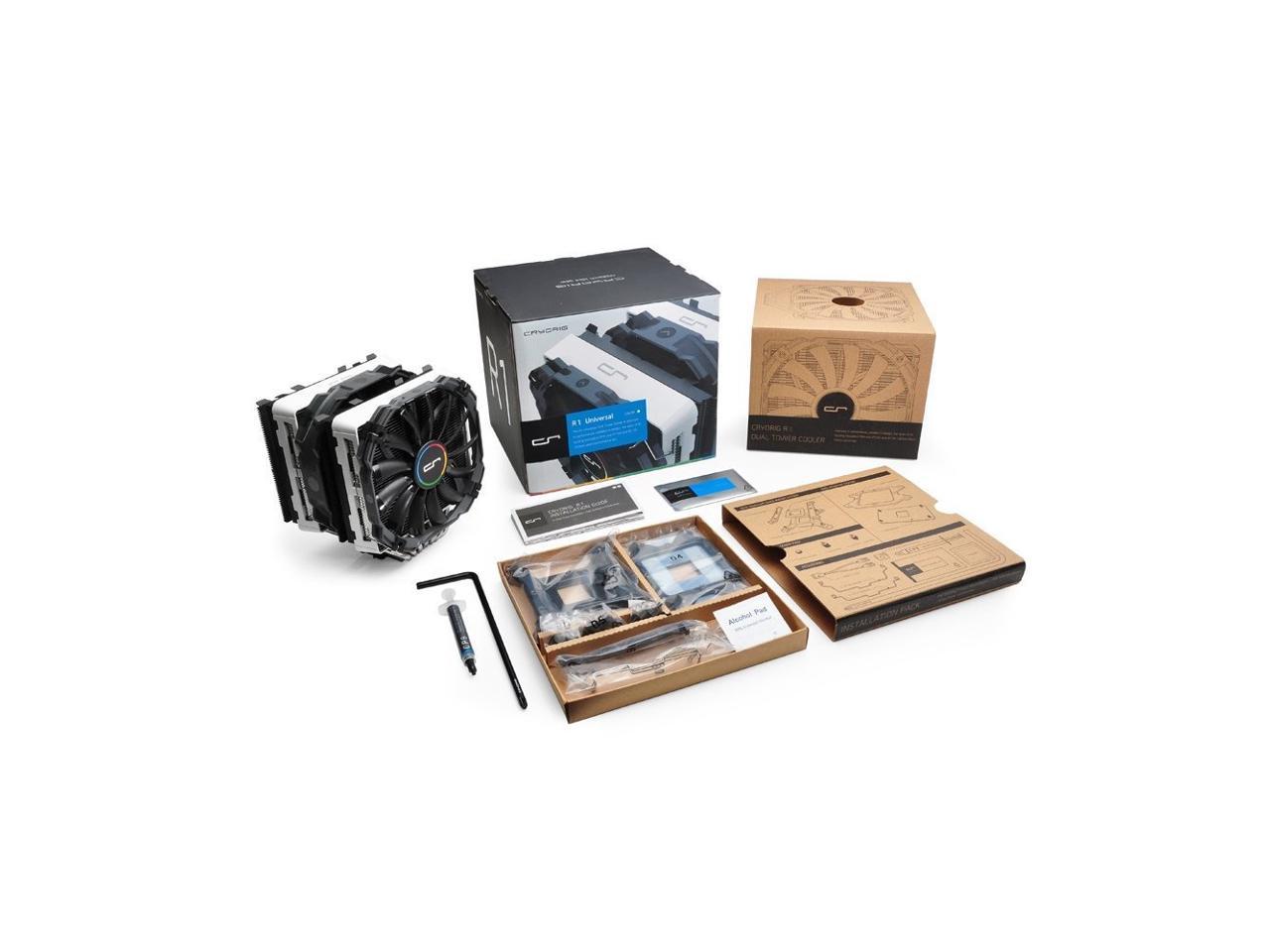 Spreading Out and Making Room

On aluminum sheets, heat spreads out in a radial direction. By displacing the heatpipe alignment on the heatsink fins, our Heatsink Displacement Optimization™ allows for better and more evenly spread heat conduction on the fins compared to traditional linear alignment. The individual tower stack is separated into two sections, the loose air intake and the high density exhaust section. By the laws of fluid dynamics, the increase in fin count in the exhaust section squeezes airflow and increases exhaust air speed. The increase of airflow speed in our Jet Fin Acceleration System™ allows heated air leave the tower faster. Kill the Noise
Silence is Cold

Acoustics are just as important as performance. That's why both the XF140 and XT140 140mm fan integrate acoustic optimizations. Both fans featuring High Precision Low Noise (HPLN™) bearing and the detachable Acoustic Vibration Absorbers that give the fan a snugger fit while canceling vibration and noise at the same time.

Focusing on providing the widest range of compatibility, the R1 utilizes an asymmetric slanted heatpipe layout to move the front heatsink fin stack further away from the RAM zone. Also, fitted with a 13mm thin XT140 the CRYORIG R1 offers optimal compatibility for RAM with tall heat spreaders on both Intel (115X/1366/775) and AMD platforms. The R1 Universal is made to fit with high-end tall RAM, even on smaller ITX boards. RAM tolerance is virtually unlimited!

*Filmed on an ASUS H87I-Plus ITX board and Corsair Vengeance RAM. Pros: AWESOME SIZE. It fits with tall memory! It's seriously great in every way, shape, and form. If you want high end performance, without the complexity or relatively poor performance of any/all lcs systems, this is the ticket! Great looks to boot!

Cons: The slim fan made a grinding noise. I have a FT02 (Silverstone) case, so the heatsink is rotated 90 degrees...I was bummed...

Overall Review: until I contacted Cryorig via email. They responded promptly to my issues, and sent a new fan out to me. Not only did this fix my issue (I had a bad thin fan, and the new fan does NOT make ticking noises) but I received a full box of the new fan, which came with some peripherals that didn't come with the heatsink. I am SO IMPRESSED WITH THIS COMPANY...THEY DESERVE YOUR MONEY. Get this...these guys are great!

Pros: Mounted to a X470 Aorus gaming 7 Wifi. Went together ok, cleared my G.Skill trident Z RGB ram. Noise level was ok, some fan level tweaking made it virtually silent except for 1 thing (see cons) Keeps my 2700x at about 50 degrees in game Looks good, no brown or tan to be seen

Cons: It is a tight fit in my Fractal Meshify C, but it does fit. I recommend mounting to motherboard and placing it all in together. Just a little tight to get to standoff screws due to the size. The 140mm Slim fan has developed a slight rattle, it does get worse as time goes on.

Overall Review: Newegg had this to my door quickly, so 5 eggs for them. Cryorig made a great product, but gets 3 eggs due to the Slim fan and poor customer service. I registered my product, contacted them twice about a warranty replacement, no response either time. Trying to find a customer service email seems near impossible. I will have to replace the fan on my own, but I will have to go somewhere else because the fan is $56 here on newegg for some reason, but $17 elsewhere.

Cons: Read the reviews and do not, I repeat, do not over tighten heat sink mounting screws. Once the mounting screws are completely seated, stop. The thermal paste that comes with the R1 is ok but an Artic Silver or another paste would give you a little better performance. Note: When installing heat sink, remove the fans, makes it easier to install Note: If you get the Colored Cover Mod, install them before installing heat sink, save the headache of removing the fan clips which can scratch the covers

Overall Review: Replace a Corsair H100i in push pull configuration with R1 Universal. CPU: Intel i7 4770k at Overclocked to 4.2 Ghz Motherboard: Asus Z97 Sabertooth Case: Corsair D750 I was getting the following temps: H100i: idle: 32c, under load: 46-49c R1: idle: 25-26c, under load: 35-40c I have not tried it yet but on other reviews, this heat sink does better then the H100i with higher OC settings. Note: Make sure your case is deep enough to house this heat sink.

Pros: I've been doing a lot of reading whether to go with this cooler or go with the tried and true NH-D15. General consensus is that the performance will relatively be the same and it's a matter of aesthetics. The R1 Universal managed to fit nicely in my case even though it is slightly taller than the NH-D15 by 3mm. I had clearance for my tall HyperX Beast ram, so the ram clearance that is advertised is true for my motherboard. Your mileage may vary. I upgraded from a Corsair H80i as I was disappointed with the performance. The R1 Universal is roughly 5-10 degrees cooler overall, idle and load compared to my H80i. The unboxing experience was excellent, Everything was laid out, everything was labeled and illustrated vividly. Cryorig's got their boxing game on lock. It's quiet, looks good, It's on sale until 9/17. Get it!

Overall Review: My box's flaps were outside of the box indicating it probably opened. Thankfully, all of the parts were in the box without any damage.

Pros: performs the same as my previous Corsair H110 AIO. The reason why I replaced my H110 was because one, the pump failed and second, after inspecting, i noticed coolant bits forming around the tube opening near the radiator! My computer froze one day while I was working on a paper for school and I freaked out! After doing some diagnostics, it turns out that my H110 pump decided to fail. I only had the H110 for about 2 years when this happened. So I told myself never again I am going to risk my expensive X99 workstation with an AIO water cooler like the H110. After doing intense search on the internet and youtube, this Cryorig R1 is one of the king of Air Coolers. I have a Thermaltake V71 case so fitment was no issue.

Cons: You know that you should always check the fitment, height and memory clearance before purchasing this beast! I had no issue because my case is full tower. It will not fit the Corsair 450D, that was a case I wanted to change in to. Your memory must be normal standard size and not those high wing span cooler attached to the memory.

Overall Review: IMO , this is the best looking king of coolers. I was thinking about getting Noctua, but I am sorry Noctua NH-D15, but the colors just don't work for me and the Noctua NH-D15 is slightly bigger than the Cryorig R1 and so is the Phantek PH-TC14PE

Pros: Big, attractive, awesome design! It was pretty simple to set up. I was surprised, this is the first air cooler I've purchased and I expected it to be big.. but WOW! Fit in my H440 without any issues, I have a 5820K overclocked to 4.4GHz and it keeps it idle @ around 32 degrees. Under a full load It would hit around 65 degrees but that was the highest I saw it go. Very attractive!

Cons: Only issue I had is due to using a X99 platform, the ram I purchased was a little to tall.. I am using the HYPERx 16GB DDR4 3000 - I had to remove one of the memory heat sinks, which personally wasn't really an issue for me. might bother some though.

Cons: Slightly a pain to install but nothing to take an egg off for.

Pros: No risk of leaking Solid build with a good warranty On par with high end AIO coolers Fairly quiet Keeps i5 8600k OCed at 5.0GHz at 60 during long gaming sessions Easy to install (with 1 simple trick) Looks a lot better than Noctua coolers and does the job within 2 degrees of variance

Cons: Not hard, but slightly tricky to install at first.

Overall Review: After taking off the center fan on the cooler, I was able to easily see when my screws were lined up with the mounting bracket. Would highly recommend for anyone wanting to have a high end cooler with no risk of pump failure or leaking.