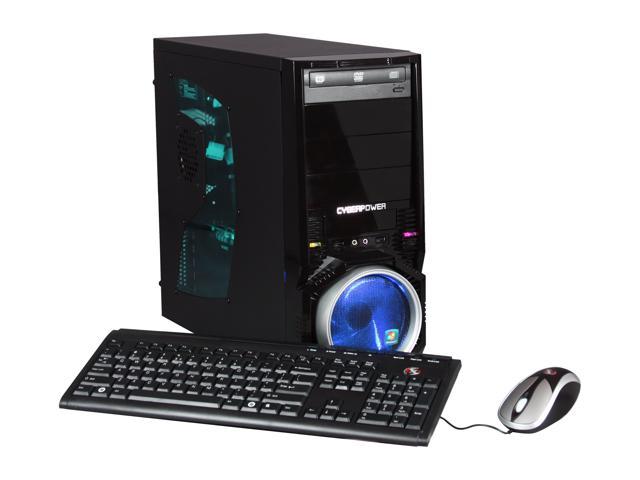 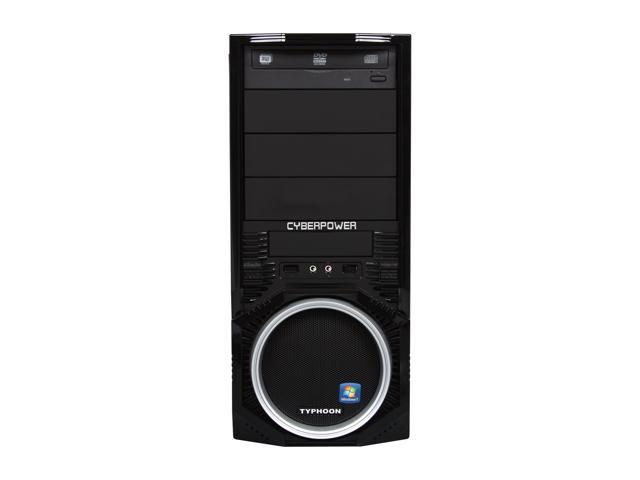 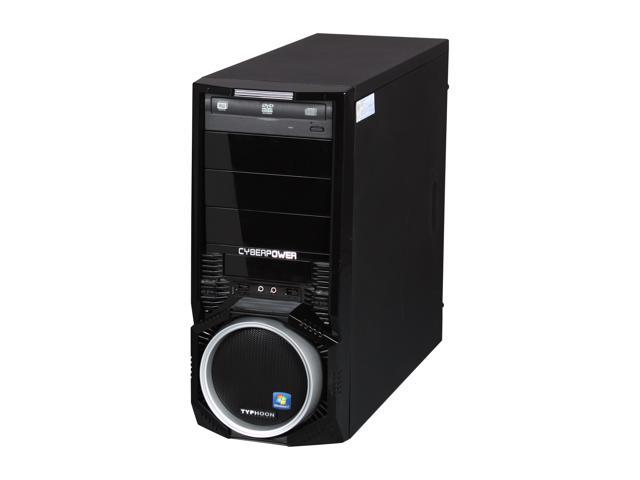 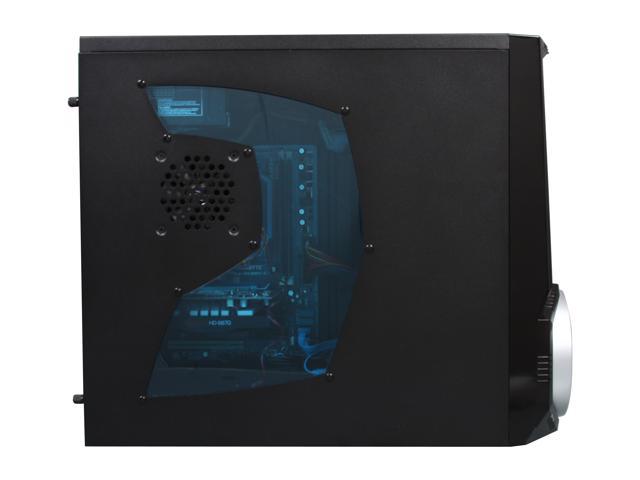 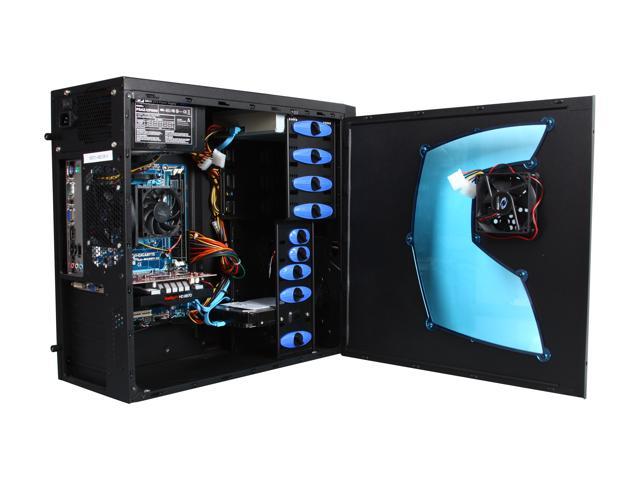 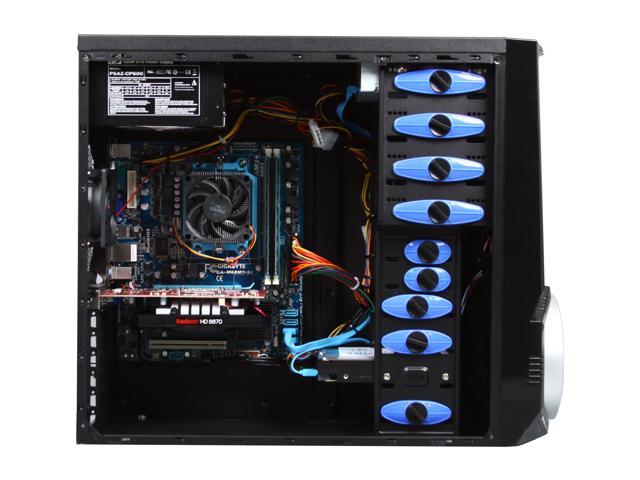 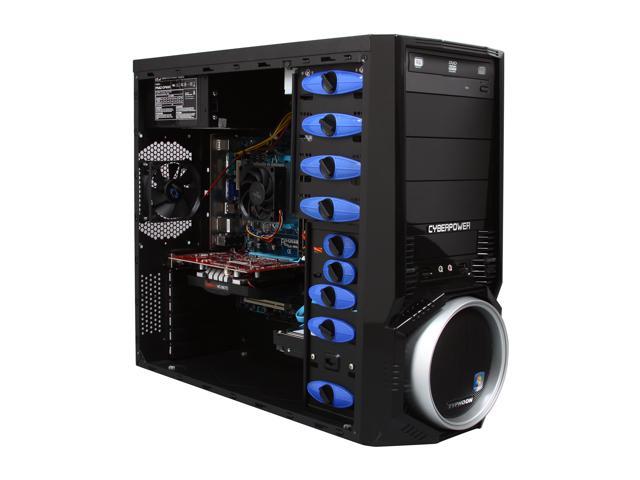 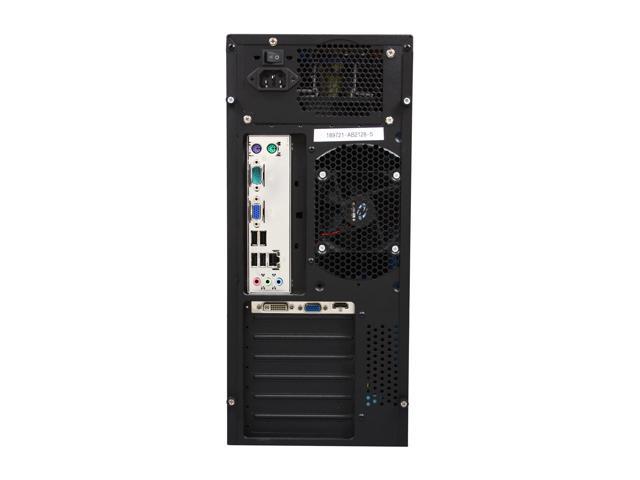 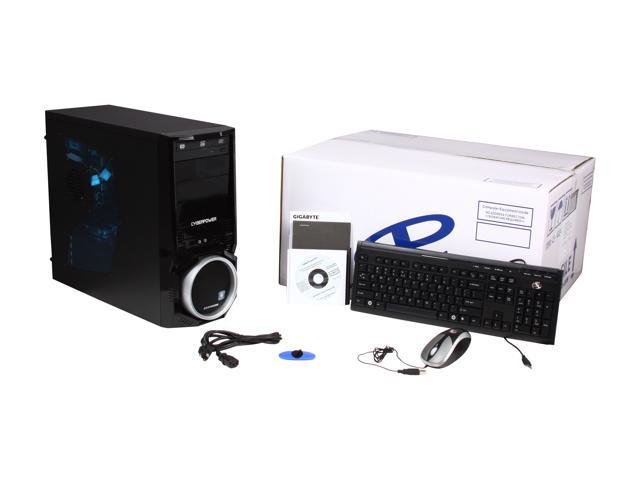 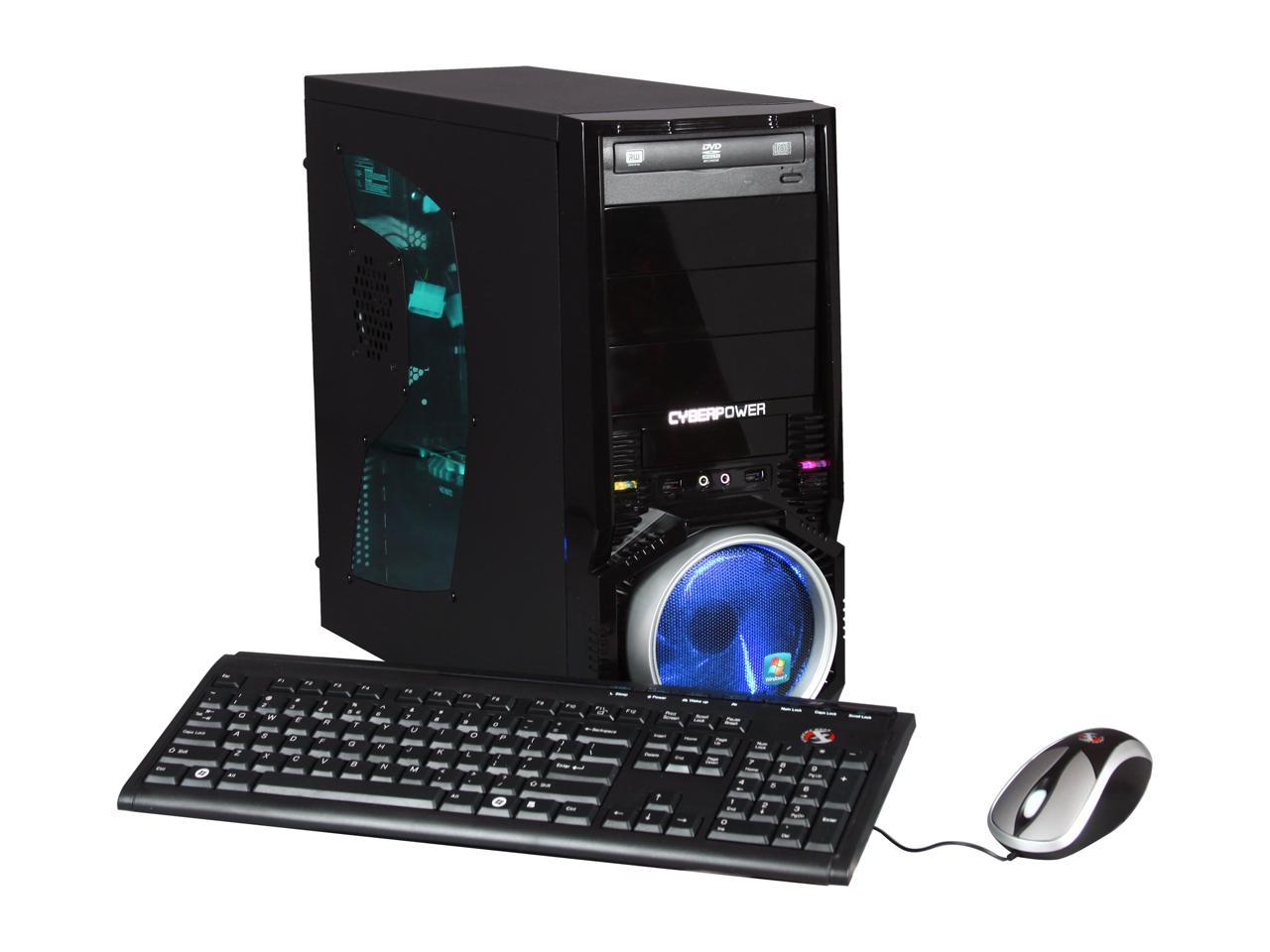 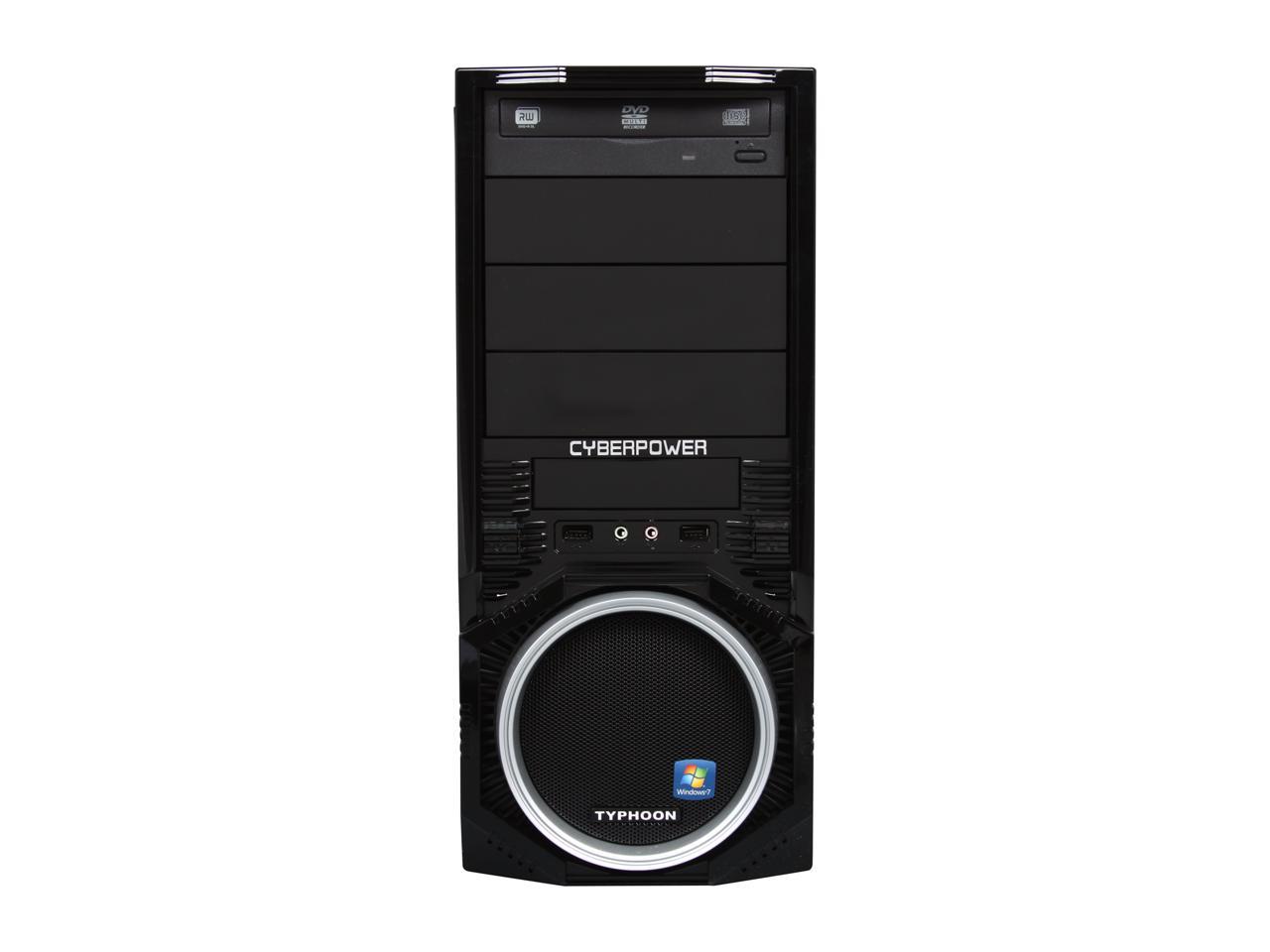 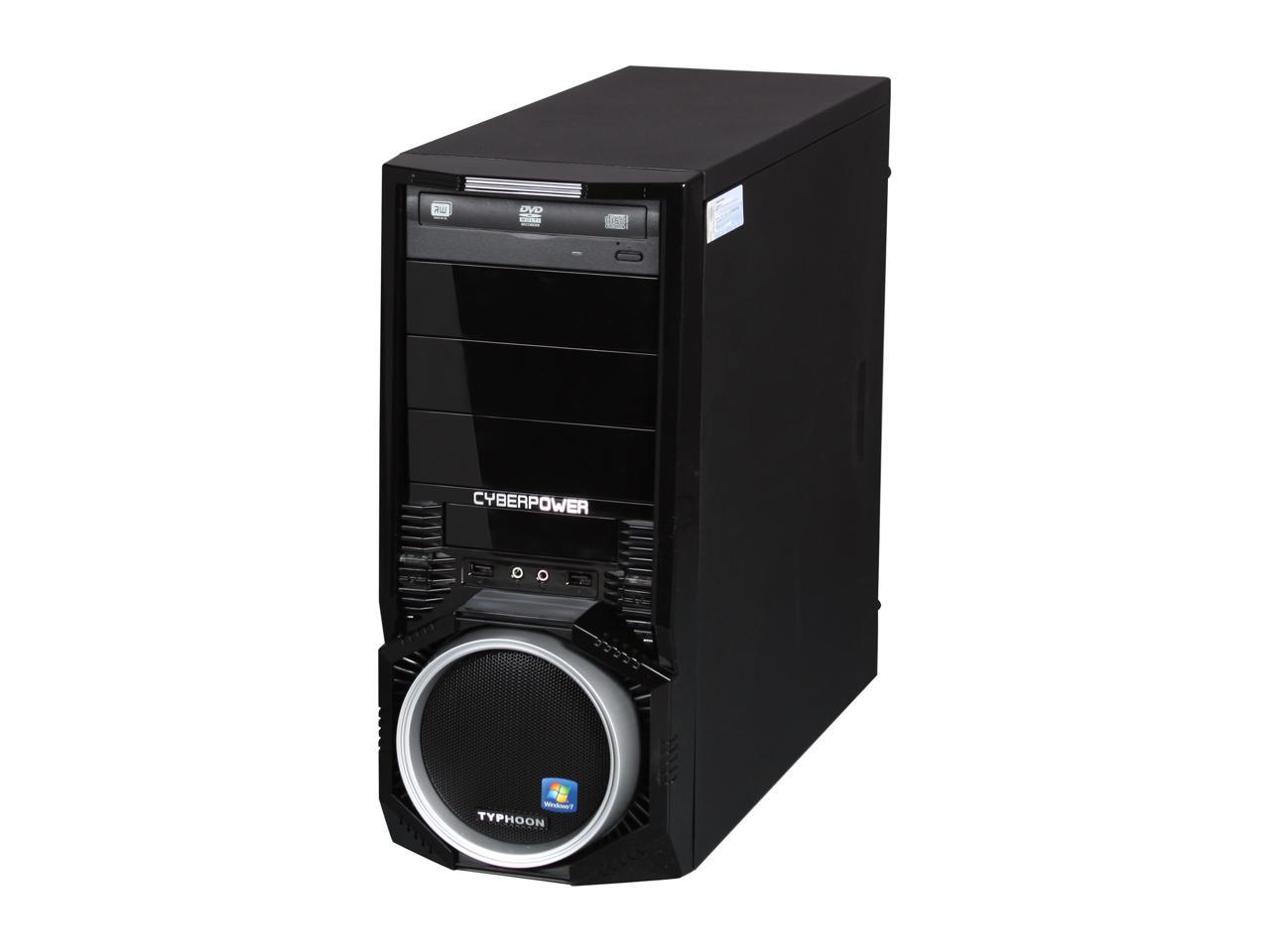 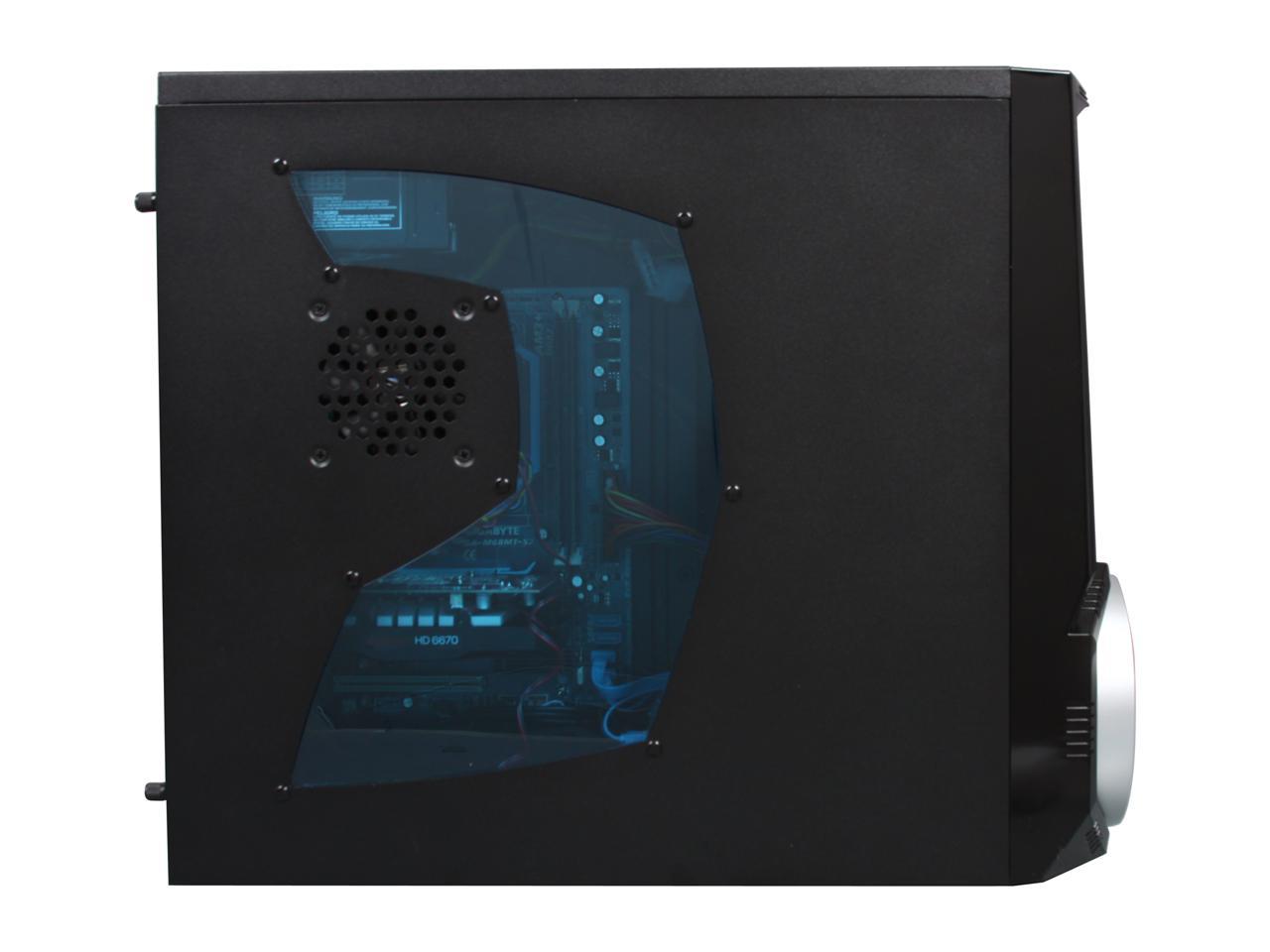 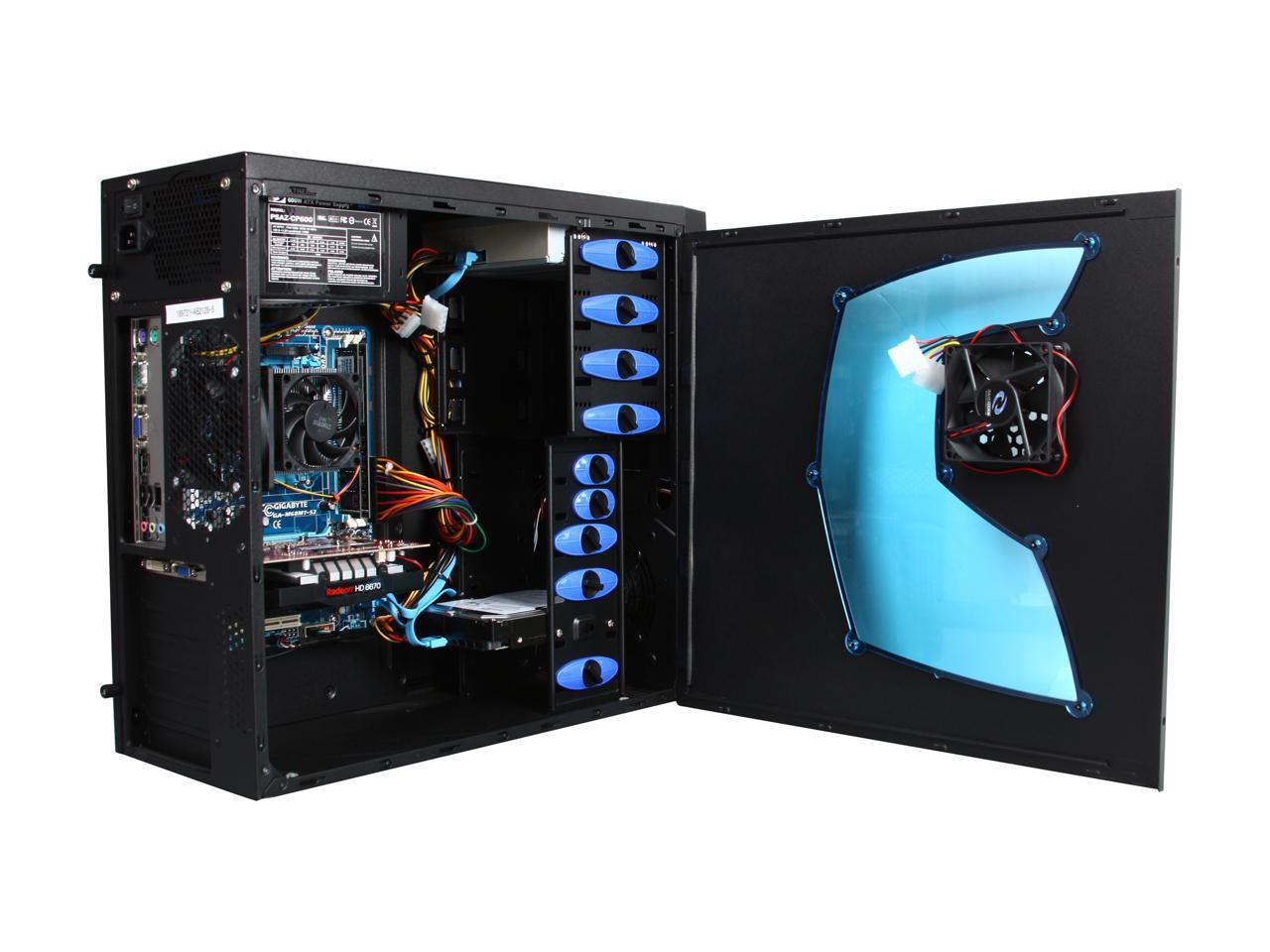 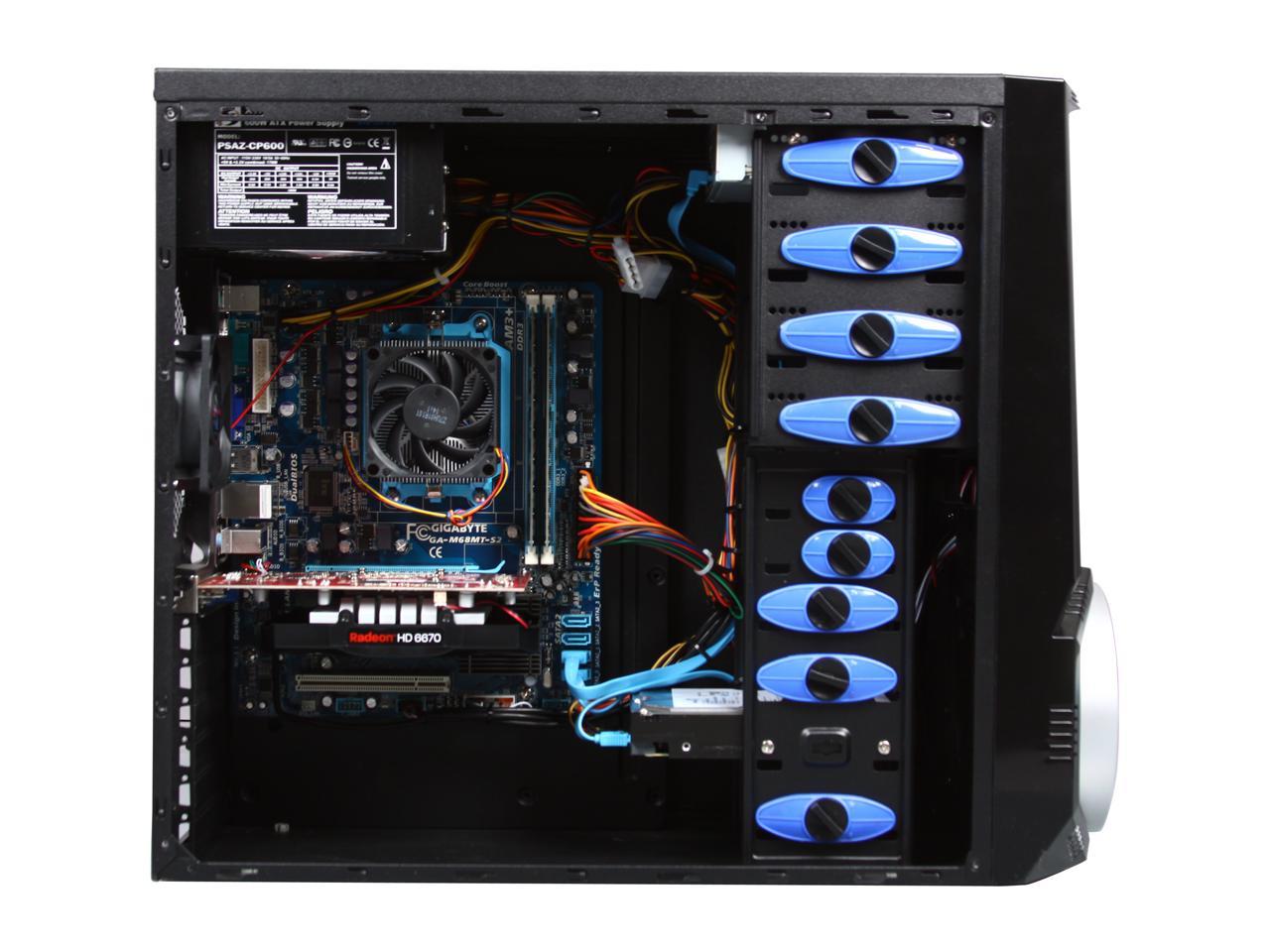 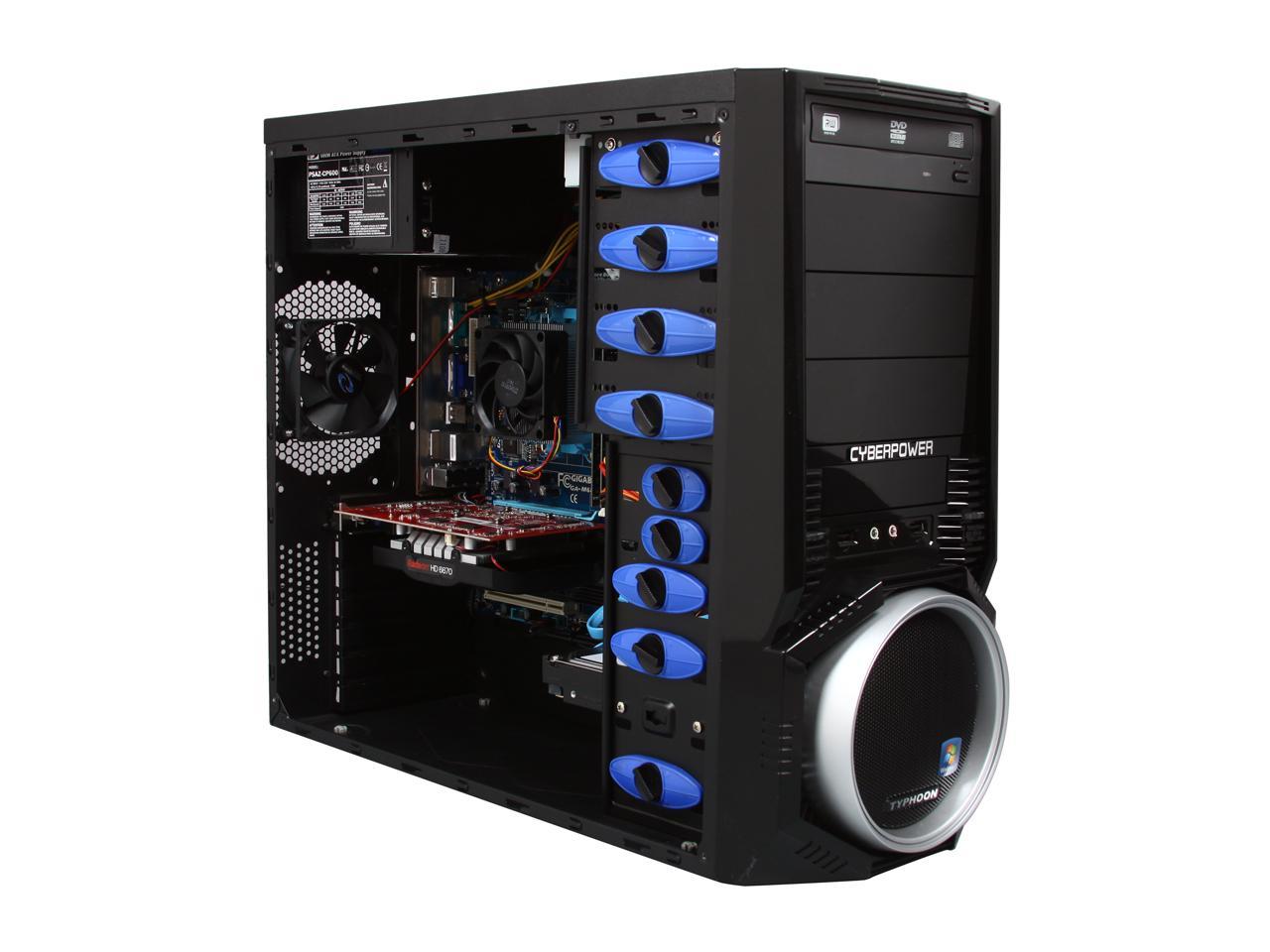 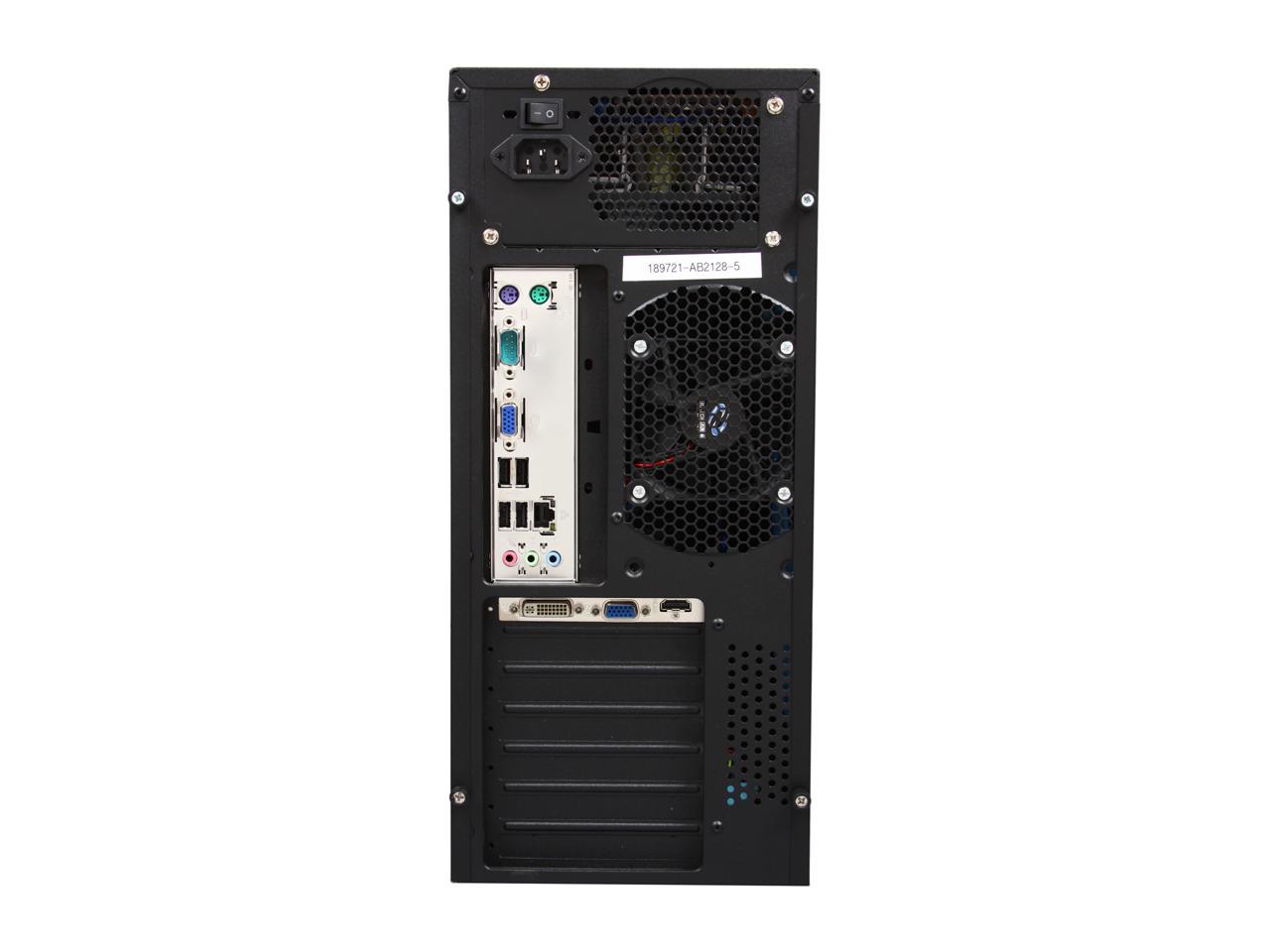 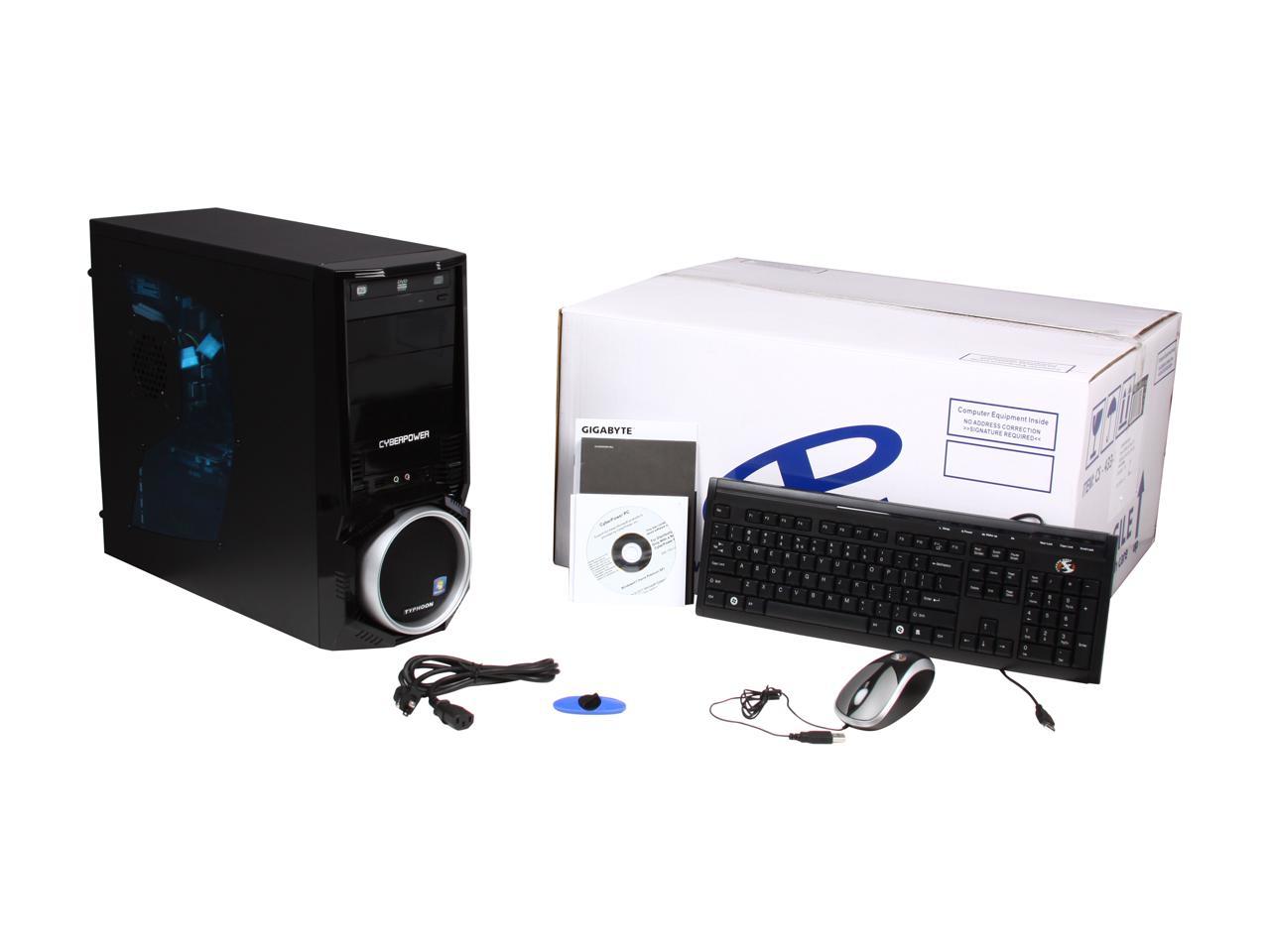 (25) Write a Review
OUT OF STOCK.
LOADING...
Overview
Specs
Reviews

Pros: Worked great right out of the box. Bought it mainly to play a few MMORPG's..World of Warcraft and Star Wars The Old Republic. Plays them both great on high/ultra settings. Fans are very quiet. I have really enjoyed this pc so far.

Cons: Problem with the front mic/speaker jack, while they do work I get odd high frequency screaching out of them, but the ones on the back work just fine. The only major problem I have is that my cd/dvd drive is EXTREMELY LOUD. Seriously, its almost unbearable and kind of scared me the first time I popped a dvd into it to try it out. Hopefully I can sort this out with customer service.

Overall Review: Gave it five stars despite the two cons I have with it, it really is a great rig for the money.

Pros: Well, lets start with the blazing fast CPU i love it :) Next is the 8GB of RAM works wonders have no issues. Shipping only took 2 days which amazing and the computer itself runs quite cool and quite. Graphics card is where it depends on the person... You can run most games on low settings. I can run BF3 at 1920x1080 at 25-35 FPS but to me that wasnt enough so i bought myself a 6870 :)

Cons: Graphics card isnt to good with the CPU as a combo.

Overall Review: BUY IT. Just upgrade to a better GFX you wont regret it. and for those that want to run Team Fortress 2 dont worry i can run it at max out settings with 40 FPS on the 6670

Cons: The computer case arrived yesterday, and I hear something flying around in the case, and it turns out to be the graphics card. This wouldnt be as much of a problem if the metal back plates could be taken off (I honestly dont know why, but I can't for the life of me get the plates off). I just registered through cyberpowerpc, and told them my issue, and I hope they can take this back and do it right, because I dont have the time to sit and try and put this thing back together.

Overall Review: I was really excited to try out this computer, but now I think I'll have to wait until they can fix this.

1 out of 1 people found this review helpful. Did you?
Manufacturer Response:
Dear Valued Customer We do apologize for the inconvenience. We understand the frustration and will make sure issue is taken care of. Understand that products must register first to process for any services since no information given prior to purchase. Our technicians will do what is necessary help retrieve a system for services. Again help us help you, if the product has not yet been registered, please email to Cyber_tech2@cyberpowerpc.com with your full information, you can also go to http://www.cyberpowerpc.com/forum/forum_posts.asp?TID=10802.
John M.
Ownership: 1 day to 1 week
Verified Owner
3/1/2012 7:24:19 AM

Pros: Great Deal for the money. Smoking fast and relatively quiet considering the number of fans in the case. I added a 4 port Rosewill USB card, since you can never have enough USB ports these days.

Cons: Failed to boot on first try, hence the 4 star rating instead of 5. Opened the case, checked all connections and realized that the tech who built this system plugged the hard drive into the wrong socket on the mother board. Switched to the correct socket and everything ran smoothly.

Pros: Great rig specs for the price, graphics card handles SC2 on high/ultra. Not too much bloatware either. 600W power supply allows you to make slight upgrades on the video card seeing as how the Radeon 6670 requires a minimum 500W supply.

Cons: Right out of the box one of the fans was flying around the inside of the casing, but easily fixed by opening the case and mounting it somewhere convenient. Also, front audio/mic jacks aren't working which I don't really seem to have a fix for.

Overall Review: IMO it's a little risky buying this PC, but (with the slight inconvenience) it is definitely possible to ship back for a full replacement by Newegg within about a months worth of time I believe.

Pros: So, I decided to pick this bugger up cause I needed a something to play games on, and for the most part its been working alright for Skyrim (not including the high def texture pack), Metro 2033 (less than max graphics), APB Reloaded and Deus Ex (with low settings and a lot of stutters during cutscenes). So it works for most games, just not very well. It is really big though, with lots of room for upgrades or what have you, and has a lot of pretty blue fans, and blinky lights if your into that kind of thing.

Cons: The biggest issue I'm having has to do with the graphics on this rig. I used the system requirements lab software to see if I could play BF3 and similar "high end" titles. After doing so however, the site was saying that I only have 751.5 MB of video ram. I don't know if its a fluke with the software or my card though, but if it is my card, I have no idea if I can fix it myself with a software (I have all the current drivers for the card) or if it needs to be replaced. Also, the motherboard does have slots for multiple cards, so crossfire is out of the question.

Pros: everything is great with this computer, easy setup out of box, working great.

Cons: there is no audio coming from the front earphone jack...but the rear jack works fine.

Overall Review: I think its the jack itself..ill call to see if i can get it resolved.

1 out of 1 people found this review helpful. Did you?
Tonilyn D.
Ownership: 1 month to 1 year
Verified Owner
Disappointed (Purchased 2 of the same product for different people in the household)9/2/2012 9:51:04 AM

Pros: Mine runs like a dream. His is complete trash.

Cons: Price is high for all the headache. Tech Support is Lip Service.

Overall Review: Its really hard to put Pros and Cons of this particular make and model because I myself purchased one with my bonus from work and the thing works like a dream. My fiancee on the other hand decided to purchase the same exact thing and it is literally the worst computer he has owned. His old Acer is a better "gaming" computer than this one. For one while he is in full screen game mode, after a half hour or so the screen will go entirely black and either freeze the computer completely or it will remove him from his game and return him to the desktop. And Cyberpowers tech support is lip service at best, the only thing they tell you to do is send it in and MAYBE it will be fixed within 6-8months. Which as spoiled as this may sound is a stupid long amount of time to go without a computer for something other Tech supports would try to help you fix over the phone. All and all MY computer runs like a dream. His runs like a 50dollar refurbished library computer. Really disappointing.

Did you find this review helpful?
Manufacturer Response:
Dear Valued Customer, We do apologize for the inconvenience. Cyberpower will always stand behind their products and will provide support whenever in need and will make sure the issue is taken care of. Please contact us directly by email to Cyber_tech2@cyberpowerpc.com for direct support or contact our direct line at 888/937-5582. Be sure to also include your full contact information since we do not have any information if the product has not yet been register.