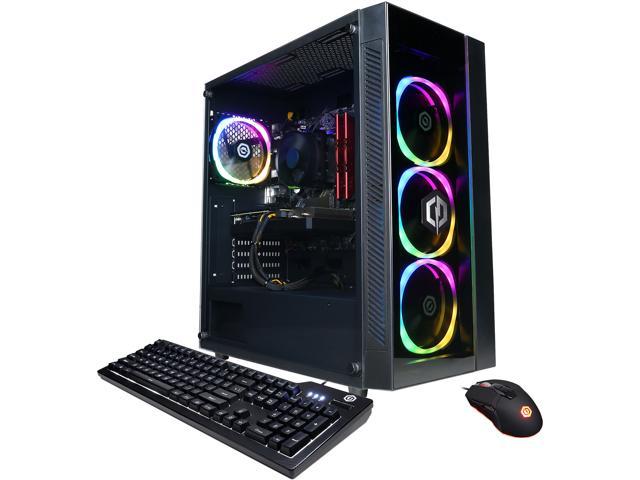 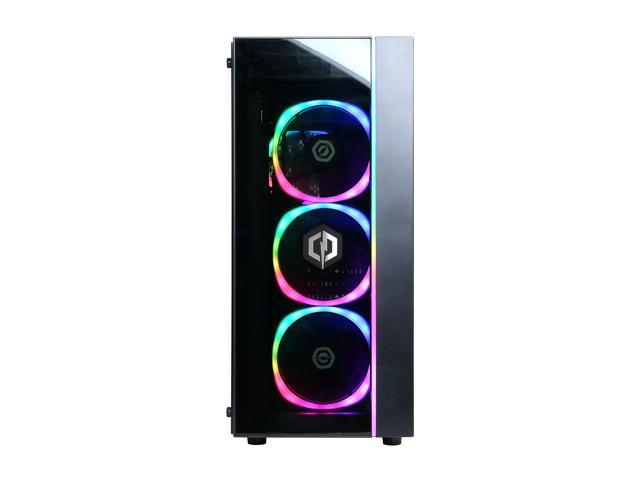 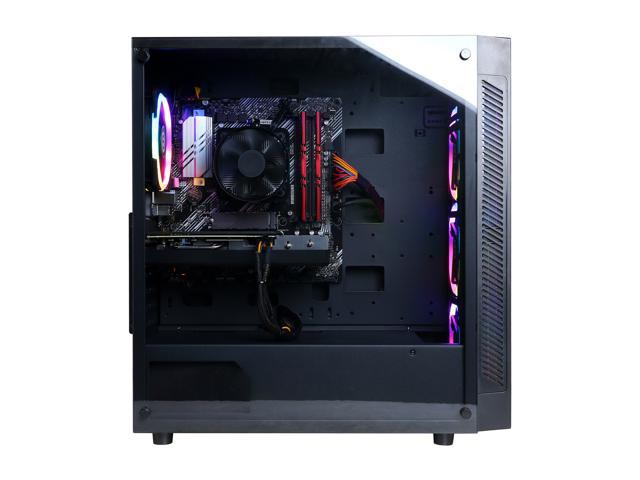 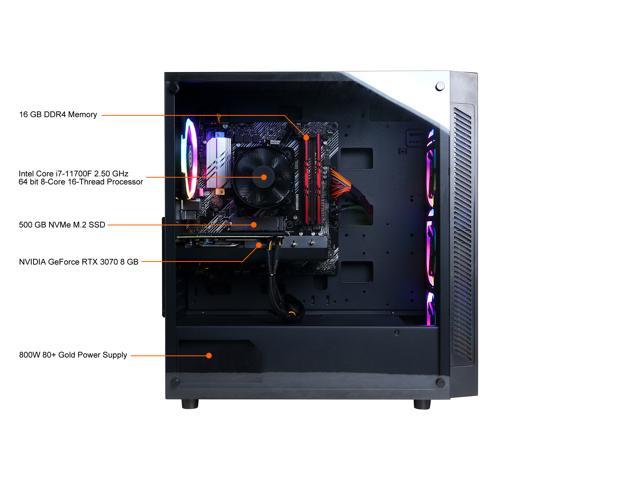 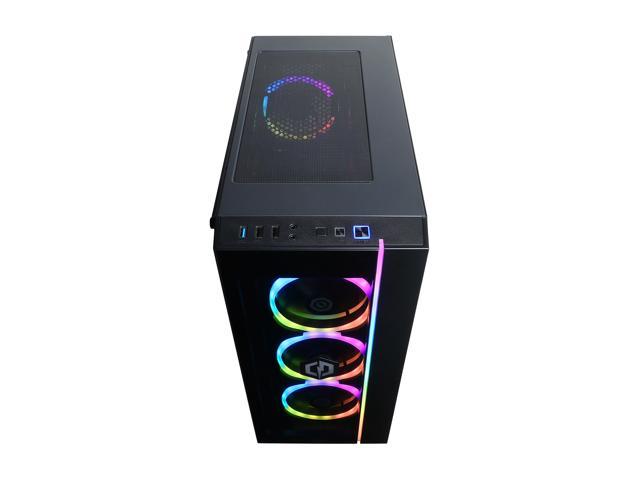 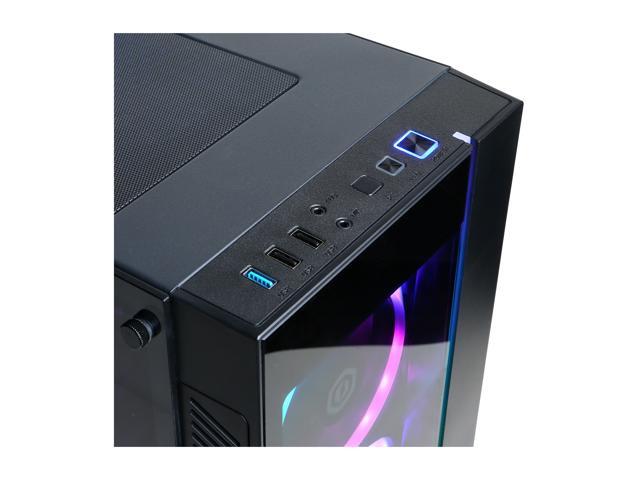 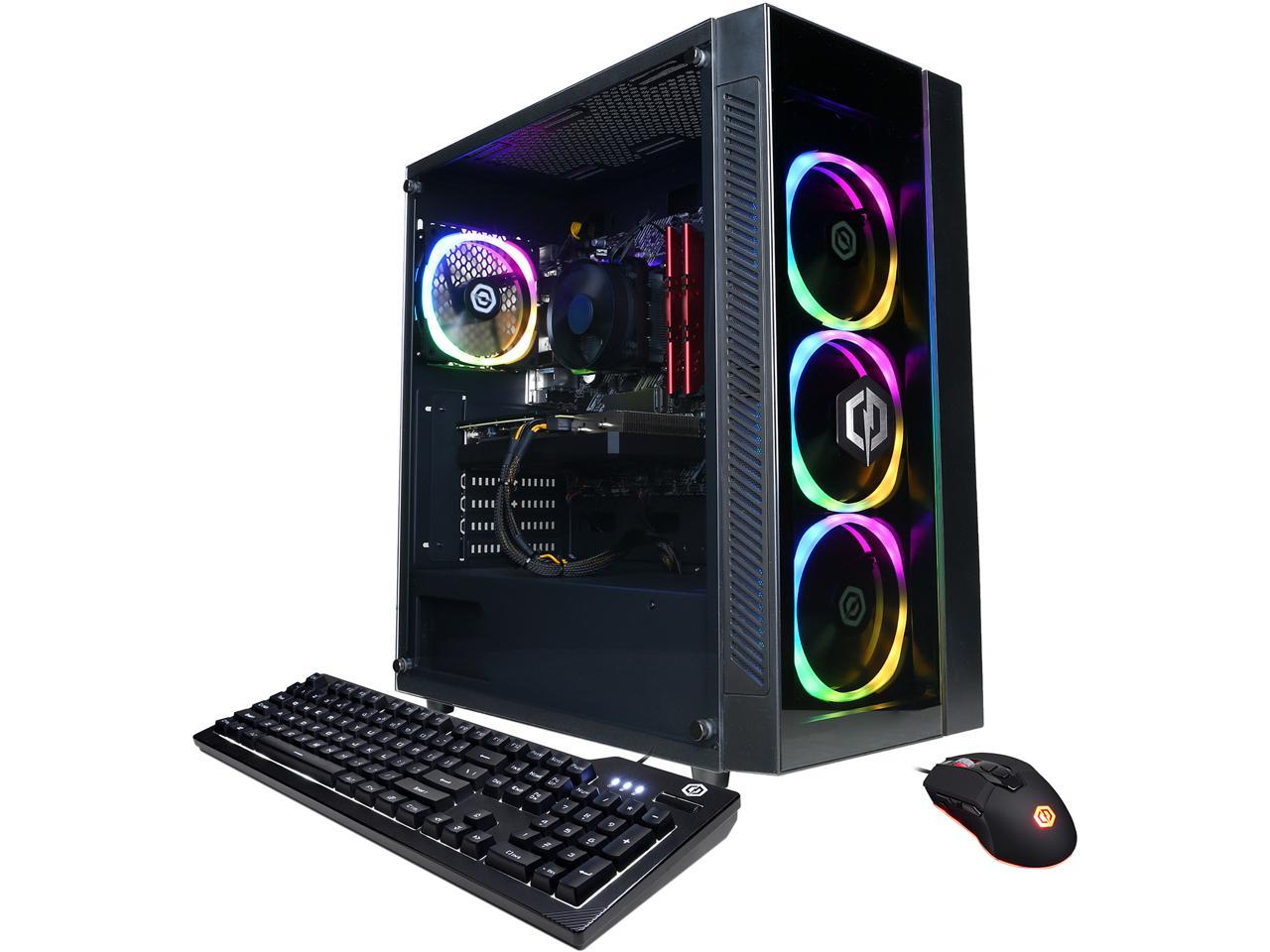 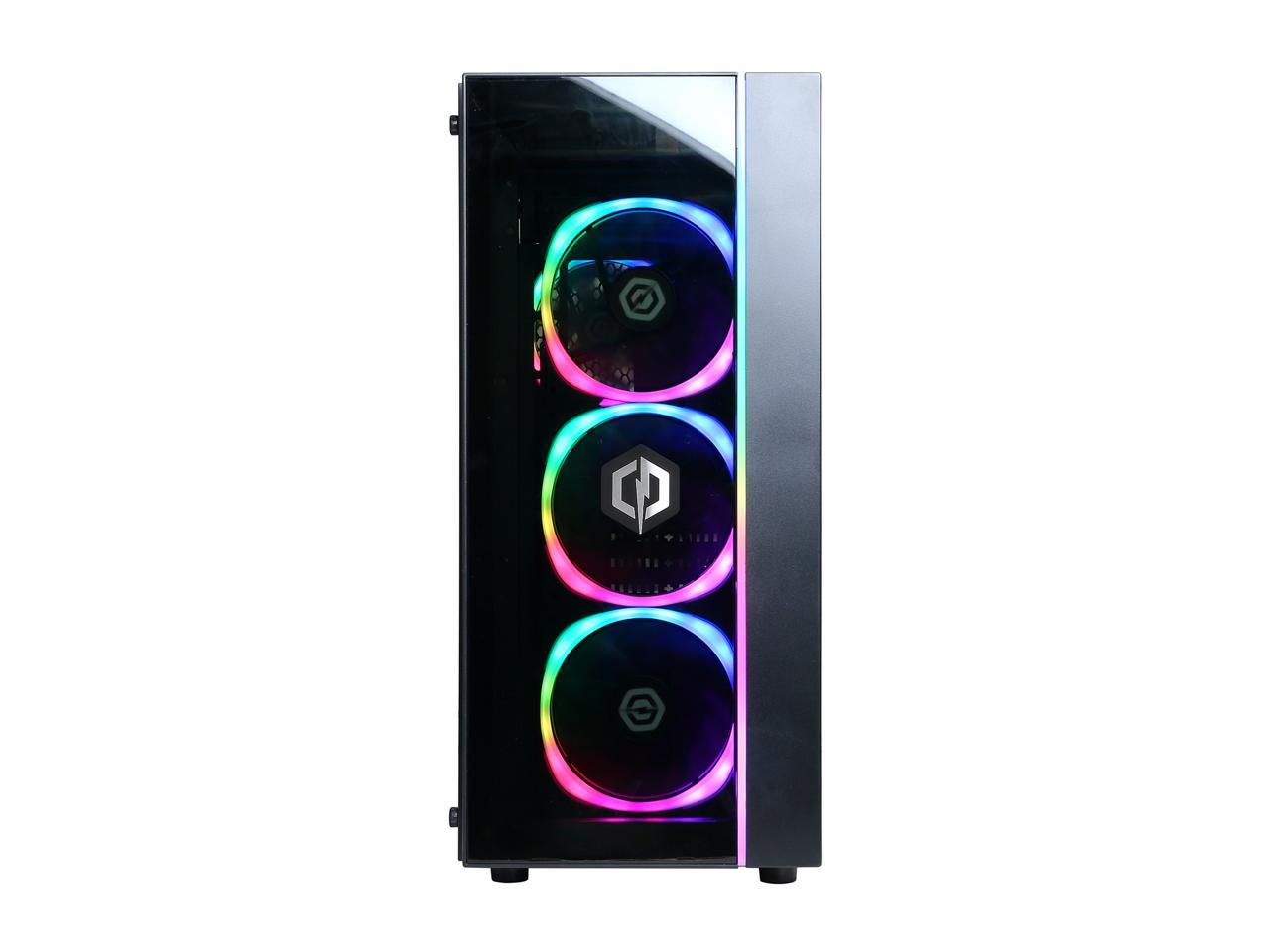 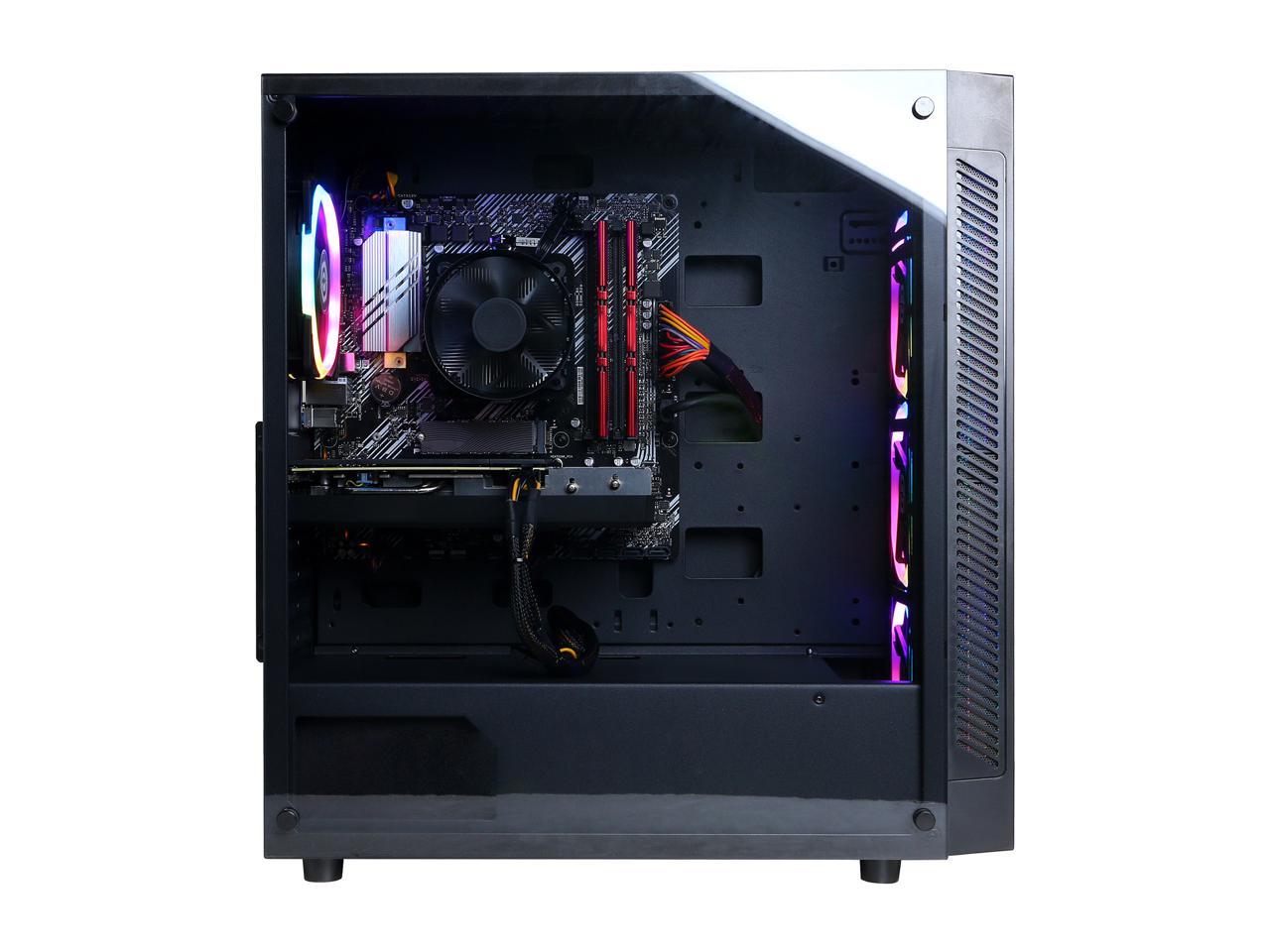 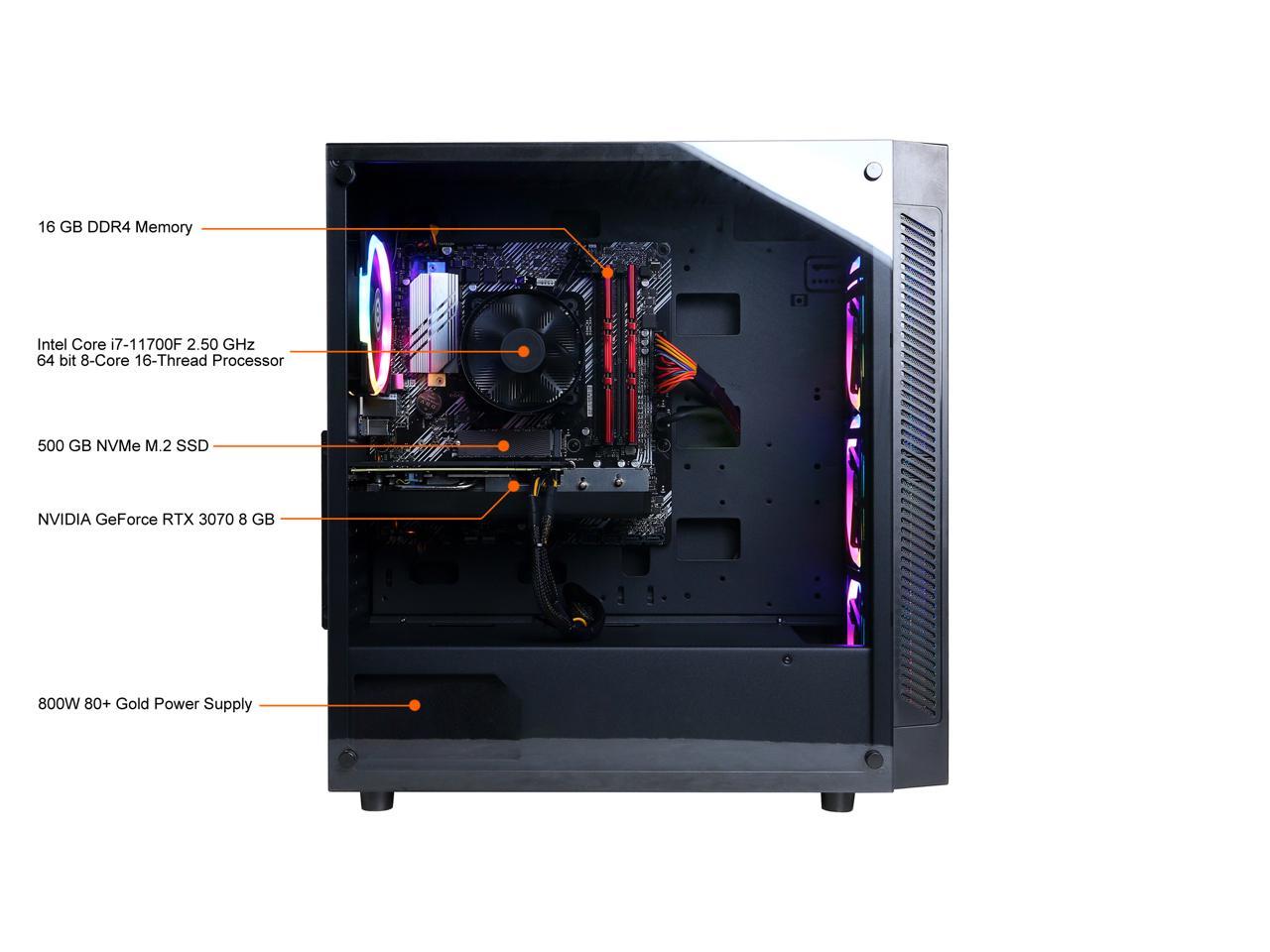 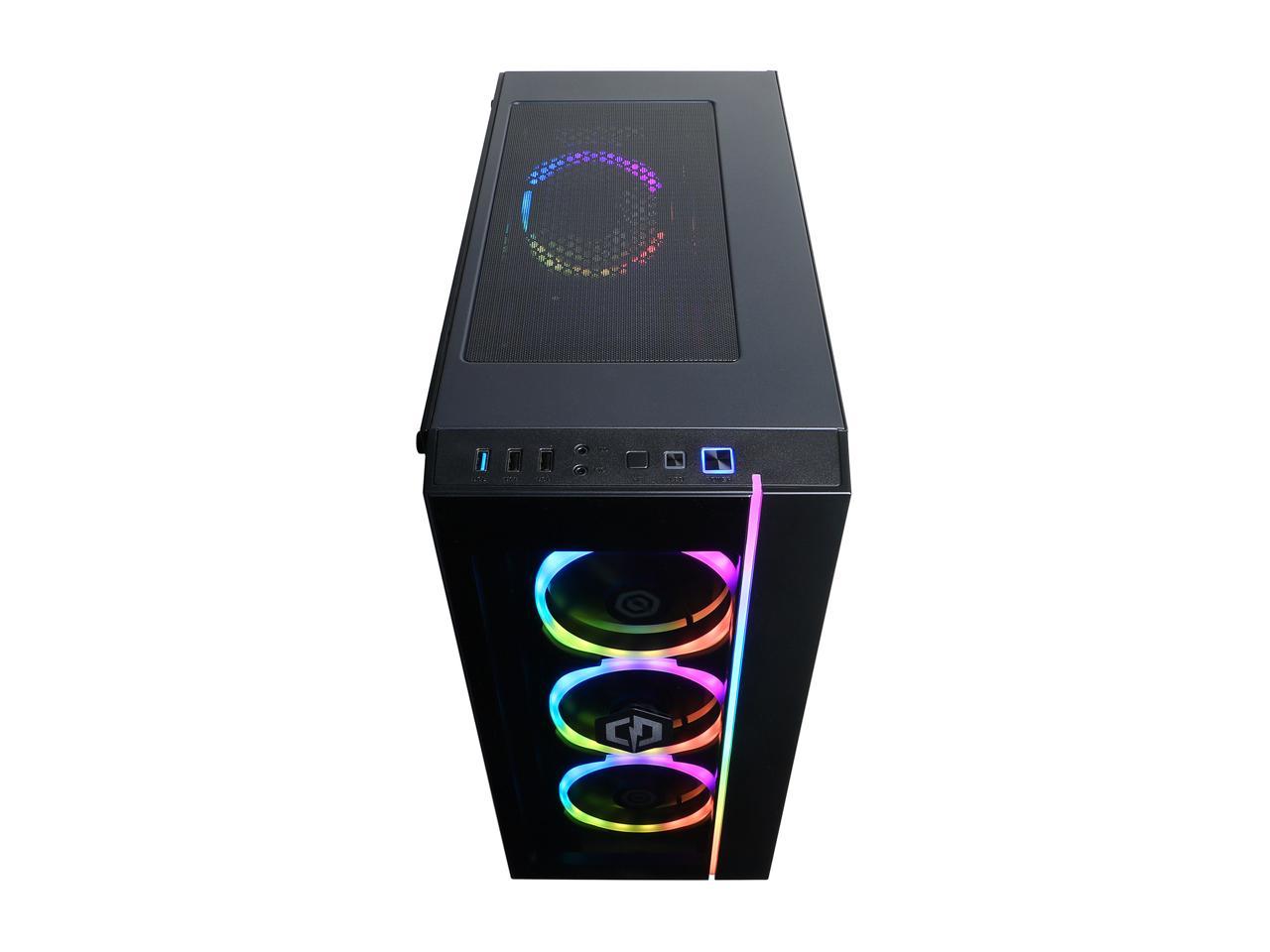 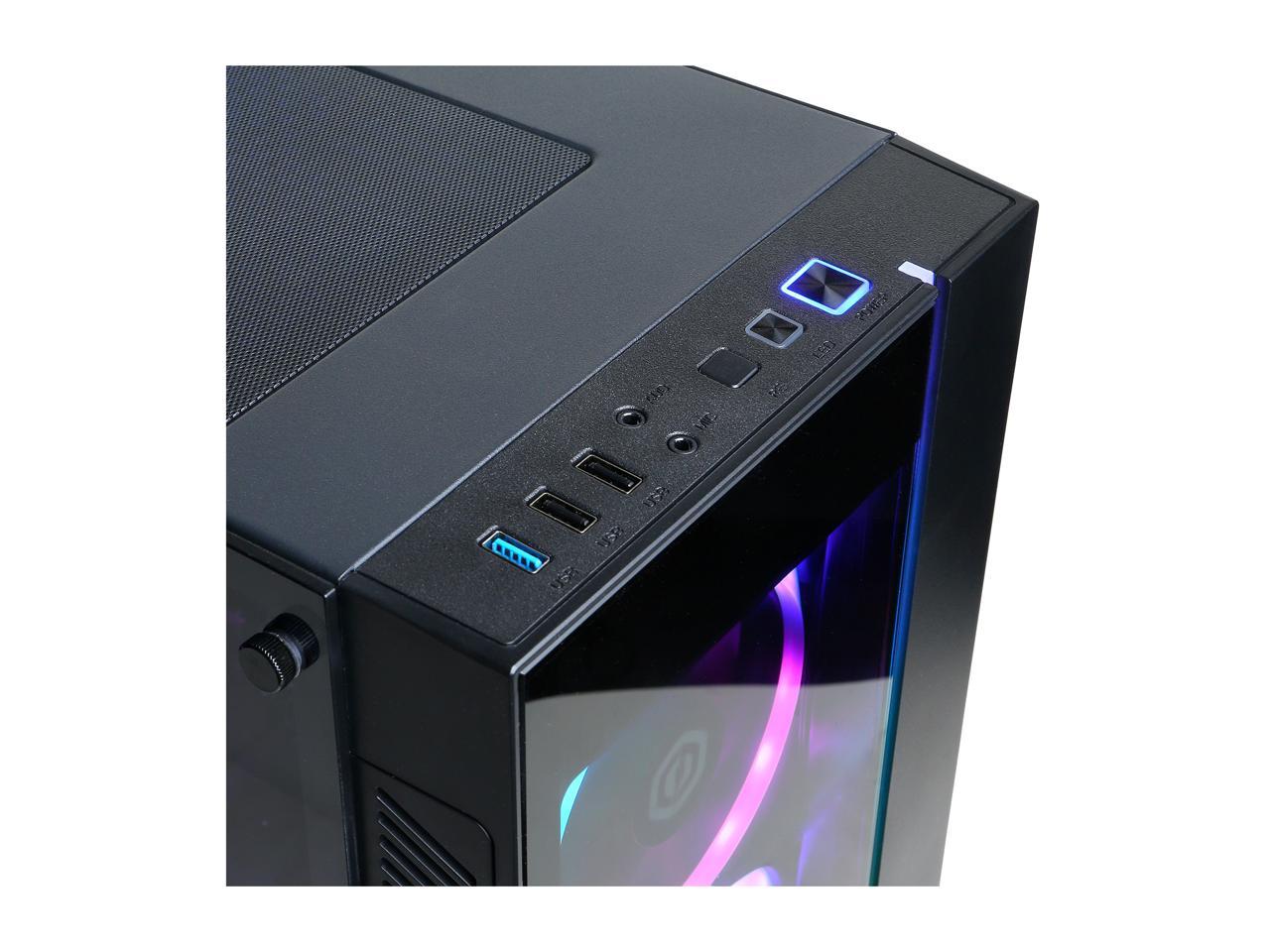 Engineered for passionate gamers who demand the best. Conquer the latest AAA titles in FHD and 2K. And the case's tempered glass panels showcase your rig's internals and gorgeous RGB lighting that will surely wow everyone.

A new generation of Intel Core processor offering awe-inspiring performance with up to 8 cores (16 threads) and 4.90 GHz Max Turbo Frequency, so you can play, record and stream simultaneously with high FPS and effortlessly switch to heavy multitasking workloads.

The GeForce RTX 3070 is powered by Ampere—NVIDIA’s 2nd gen RTX architecture. Built with enhanced Ray Tracing Cores and Tensor Cores, new streaming multiprocessors, and high-speed G6 memory, it gives you the power you need to rip through the most demanding games.

Learn more about the CyberpowerPC GX60090

Pros: Extra M.2 Gen 4x4 slot big enough for a 22100 SSD to be installed (routed via northbridge). 2 open RAM slots. Built in WiFi card is off to the side and out of the way. Extra interface ports on the board to add extra USB ports. Fresh and clean Windows 10 install without a ton of advertisements installed.

Cons: Only SSD is a 500GB M.2 Gen 3x4, mounted under the video card, communicating on the southbridge. Unique sized stand-off for the other SSD doesnt include a mounting screw (which was nearly impossible to match up). System/case fans independently powered, leaving the MB ports empty, making all the advanced BIOS management of those fans somewhat useless (including the dead fan emergency shut down feature). Fans are loud, but to be expected, except CPU fan appears to be severely undersized for the heat generated from a Gen 11 Intel Core i7.

Overall Review: Overall, I have really nothing but good things to say. If buying this, plan to buy a new SSD to add on and some extra RAM. Whats included is 16 GB of 3200 DDR4, so I bumped mine to 32. When time comes, I may also want to upgrade the cooling system, and reroute fan power to the MB. Lastly, I HATE the look, lol. This isnt a con because everyone has their own taste, but I must add that is looks quieter than the model pics show. It isnt as loud and flashy as it appears (which was a great relief to me, someone who normally cuts ALL LED lighting on a system). The machine provides MORE than enough power to where it doesnt need an extra light show to look good. Using it shows the true power of this unit.

Cons: Look for the cheap Intel cpu cooler and replace it. Cable management was bleh. No mounting hardware for extra drives.

Overall Review: Everything on the system worked right out of the box. No broken or missing pieces. Everything worked as it should. But...I noticed right off that they had used a small intel cpu cooler on the build. And sure enough that was this systems Achilles Heel. The system ran great under non gaming loads. Everything seemed fine for the first few days. But when it came time to play any demanding games the Intel cpu cooler just couldn't keep up. The CPU heated up and would crash to desktop. No warning other than some really loud fan noise. No errors just either a blue screen crash or a black screen crash to desktop. After running some tests on memory and the drives I loaded up a monitoring program for the CPU. Sure enough the cpu was hitting the TJM and was crashing the game. As soon as the game crashed temps would drop and all would be fine. I ended up having to pull the Intel CPU cooler out and replaced it with a 240 AIO. CPU Temps now never reach over 65 under full load and everything is stable. Bottom Line: Buy only if you want to invest in a new CPU cooler. The one they installed is not strong enough to cool the very hot running i7-11700F

2 out of 2 people found this review helpful. Did you?
Manufacturer Response:
Dear Valued Customer, We are sorry to hear about your experience and apologize for any inconvenience this may have caused. We always recommend you contact us as soon as you run into any issues with your PC as we are usually able to resolve it over the phone. If you haven't already, please contact our tech support agents at your earliest convenience so we can look into the matter further. Tech Support: (855) 888-2039 techteam@cyberpowerpc.com Hours of Operation: Monday - Friday: 8:30AM - 6:00PM PST Saturday: 9:30AM - 3:00PM PST CyberPowerPC Support
Anonymous
Ownership: 1 day to 1 week
Verified Owner
Good buy, but upgrade cpu cooler9/6/2021 11:39:46 AM

Cons: CPU temp practically lives at 90-100 degrees even when not gaming. Need to upgrade cpu cooler immediately. RAM isnt great quality but it works for now. No room for extra drivers.

Overall Review: Not disappointed in purchasing this device.

Pros: Came with an MSI brand 3070, which I couldn't find anywhere reasonable. Build quality is really great, with relatively easy-to-manipulate cable management already done. I was able to make upgrades (Second SSD, better CPU Cooler, more ram) with very little hassle, even with taking out the motherboard and other components. Good airflow, even in my cramped setup. Pretty colors Comes with decent Keyboard and mouse, which I liked.

Cons: I took proactive steps to upgrade the cooler after reading other reviews. While this wasn't too bad, for someone who doesn't like to work on their own stuff, this might be an issue. I say might, because I didn't even bother running the computer with the stock cooler first like I should have for the review. You're milage may vary, I tend to push my gear and I cooked my last computer, so this step was a no brainer. Not sure about the onboard WiFi. My networking setup sucks, but I used an upgraded antenna and it seems to work OK. You should hardwire anyway, so take it or leave it It was a bit pricey, but in this crazy time it was worth the money

Overall Review: I've been running it for a few weeks now, and have had ZERO issues with it. Very satisfied. I'll try to update this review after a longer time frame and update my thoughts.

Pros: Was able to plug in and get right to town with set up/gaming. Great graphics card for this price!

Cons: I suggest getting a 1TB SSD to replace the 500 and also a 32gb ram to update the 32 other than that, works great.

Overall Review: Didn't come with the greatest RAM or SSD, but I can update those myself, besides that great rig.

Overall Review: PC arrived quickly, very clean, only one thing unplugged. Included mouse and keyboard are nice. As other reviews have stated, this thing cannot handle any graphical content without crashing. I have yet to replace the stock CPU cooler, but I find it aggravating to say the least that I cannot use something like this at this price point right away. My issue would not be so drastic if it werent for the price tag. Im happy to spend money on quality products, but being a novice to this hobby and trade did not help make me feel better about spending the money on this. I would be happy to leave a better review once I solve the issue of cooking the CPU, but I cannot in good faith give this more than one egg out of five.

Did you find this review helpful?
Manufacturer Response:
Dear Valued Customer, We are sorry to hear about your experience and apologize for any inconvenience this may have caused. We always recommend you contact us as soon as you run into any issues with your PC as we are usually able to resolve it over the phone. If you haven't already, please contact our tech support agents at your earliest convenience so we can look into the matter further. Tech Support: (855) 888-2039 techteam@cyberpowerpc.com Hours of Operation: Monday - Friday: 8:30AM - 6:00PM PST Saturday: 9:30AM - 3:00PM PST CyberPowerPC Support
Anonymous
Ownership: 1 month to 1 year
Verified Owner
The fan on the CPU is not adequate.8/24/2021 1:48:18 AM

Pros: For the shortage of hardwear in the current market the price isnt bad.

Cons: The fan on the cpu can not handle the type of heat this thing outs out. Just starting it up without running anything I saw temperatures bewteen 90°C and 100°C. These heat levels can be damaging to the processor and may lead to it having a shorter lifespan. You will absolutely need to buy a new heatsink for this rig.

Overall Review: Im disapointed that they would make a really great rig like this only to have it fall short by putting in a heatsink that would never be able to keep up with the processor.

Did you find this review helpful?
Manufacturer Response:
Dear Valued Customer, We are sorry to hear about your experience and apologize for any inconvenience this may have caused. We always recommend you contact us as soon as you run into any issues with your PC as we are usually able to resolve it over the phone. If you haven't already, please contact our tech support agents at your earliest convenience so we can look into the matter further. Tech Support: (855) 888-2039 techteam@cyberpowerpc.com Hours of Operation: Monday - Friday: 8:30AM - 6:00PM PST Saturday: 9:30AM - 3:00PM PST CyberPowerPC Support
Anonymous
Ownership: 1 month to 1 year
Verified Owner
Faulty PSU8/18/2021 2:44:15 PM

Overall Review: Seemed to be a great computer bought it mid July. A bit over a month later it won't turn on at all. I'm thinking the PSU is faulty