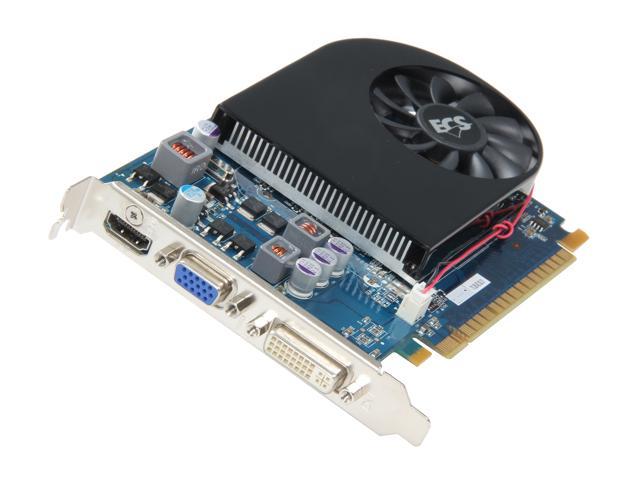 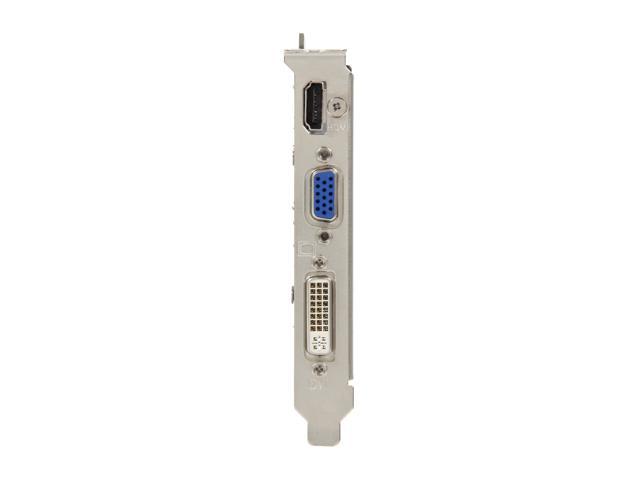 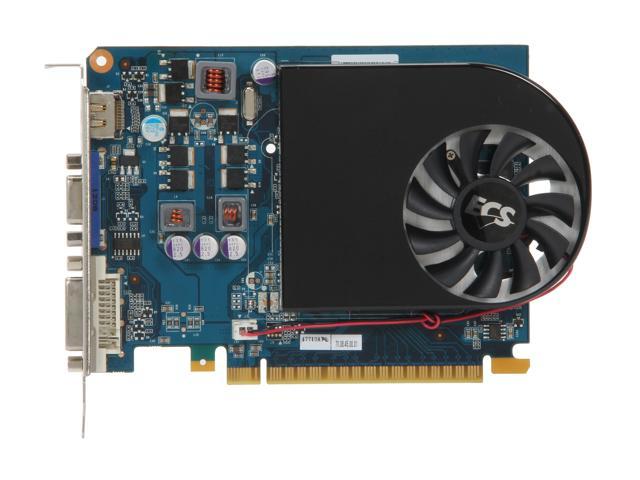 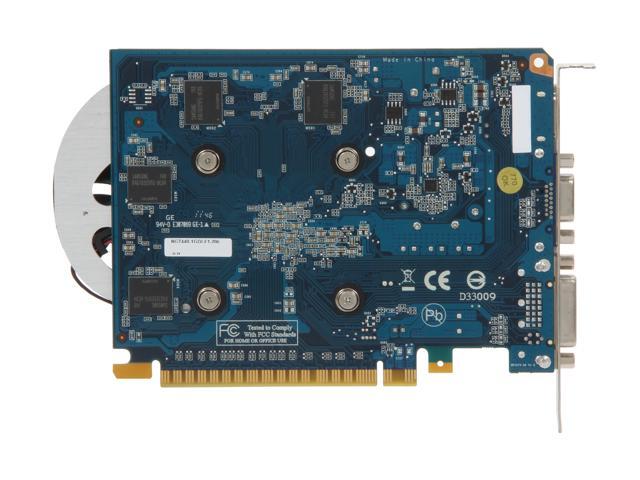 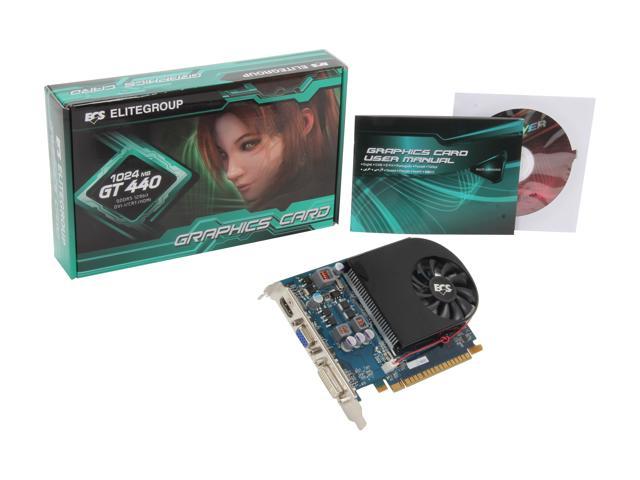 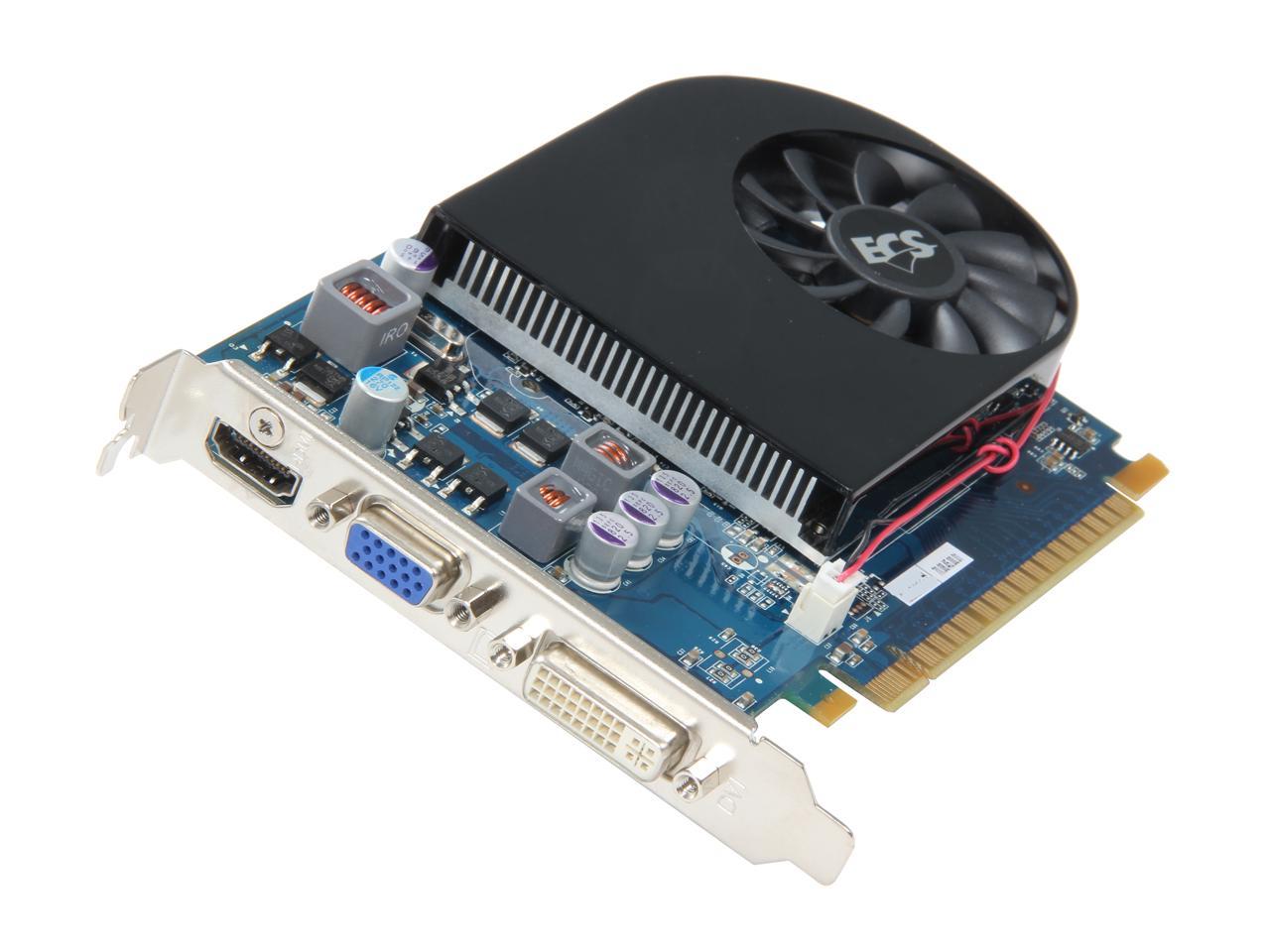 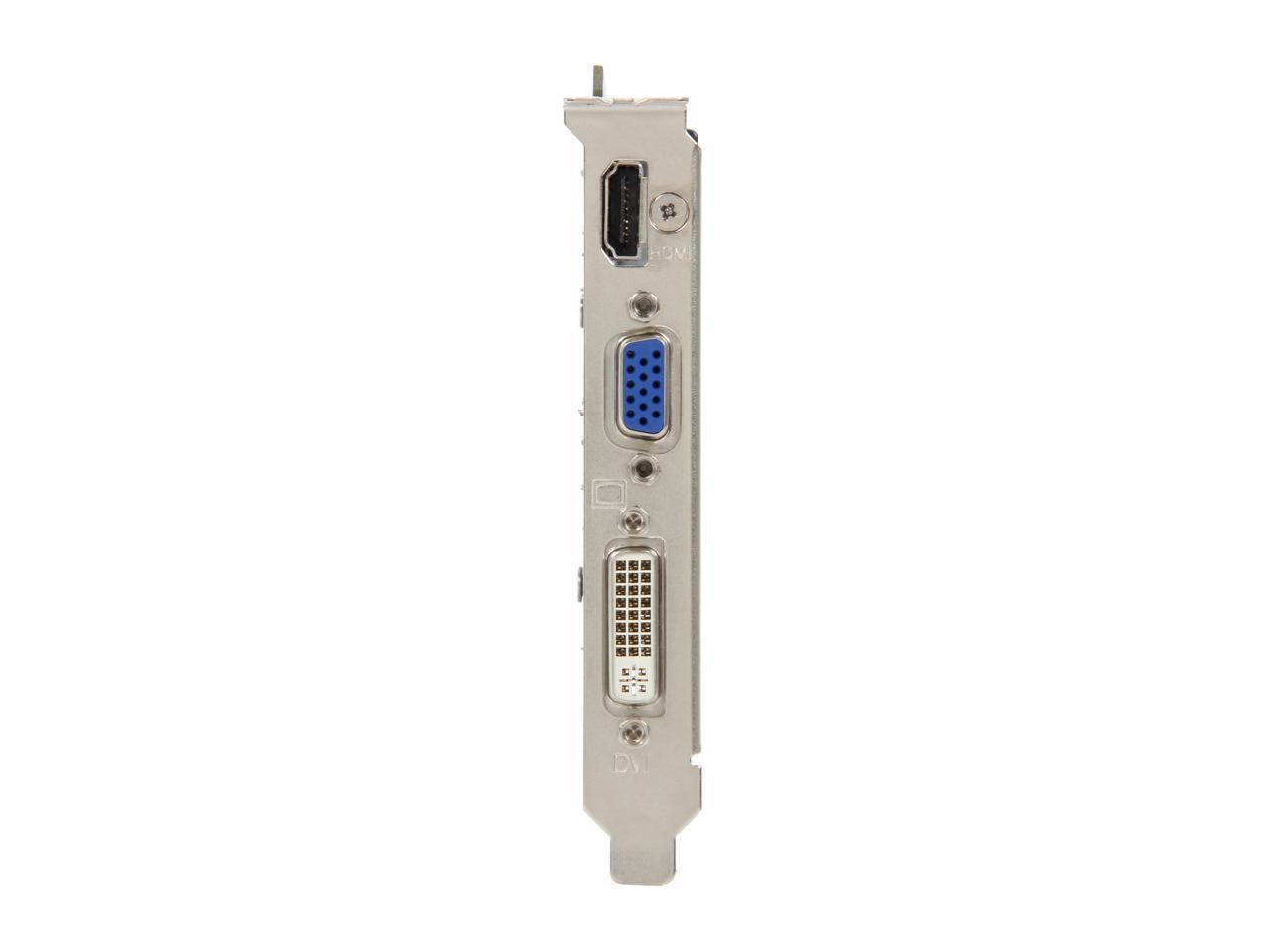 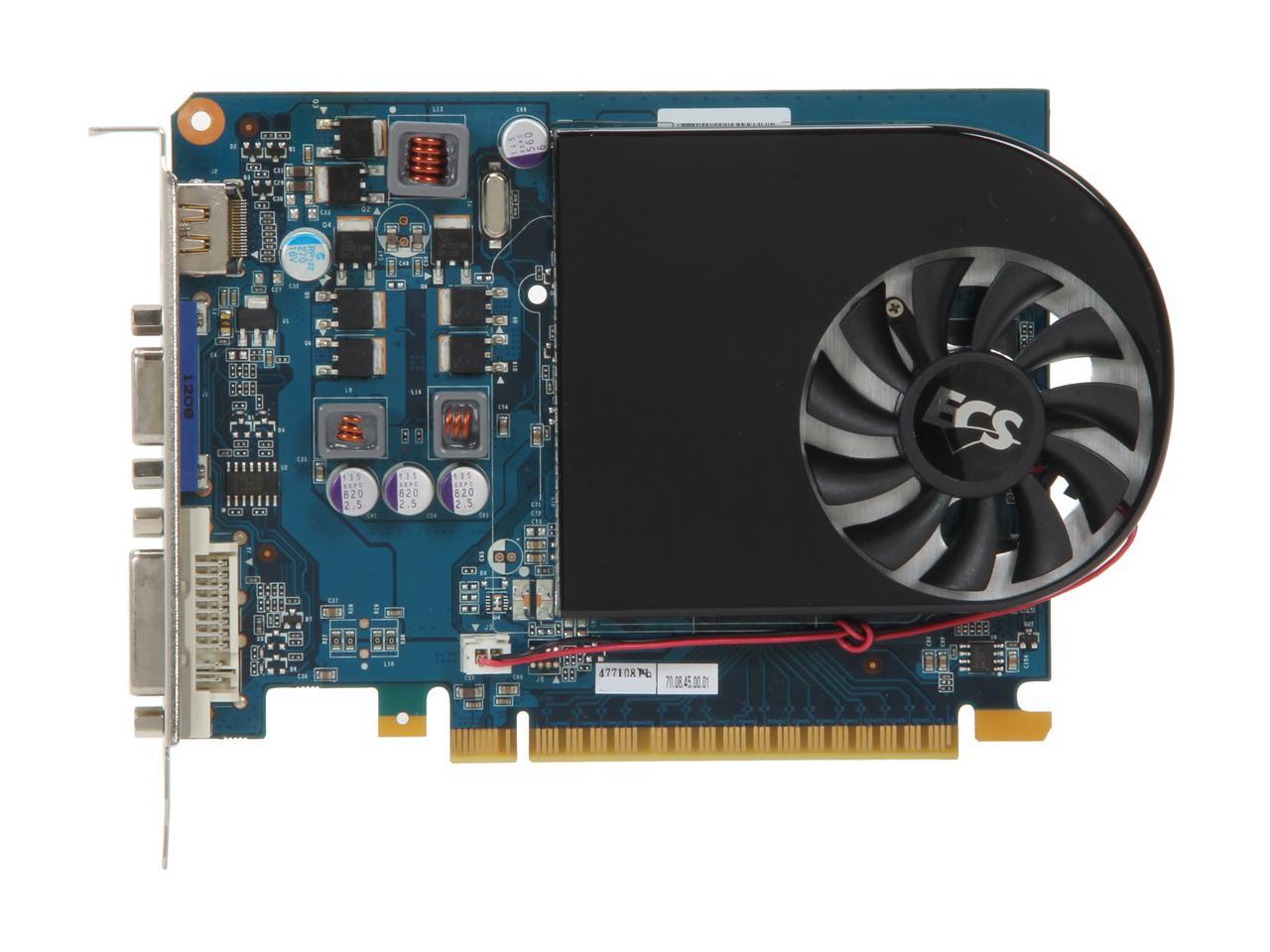 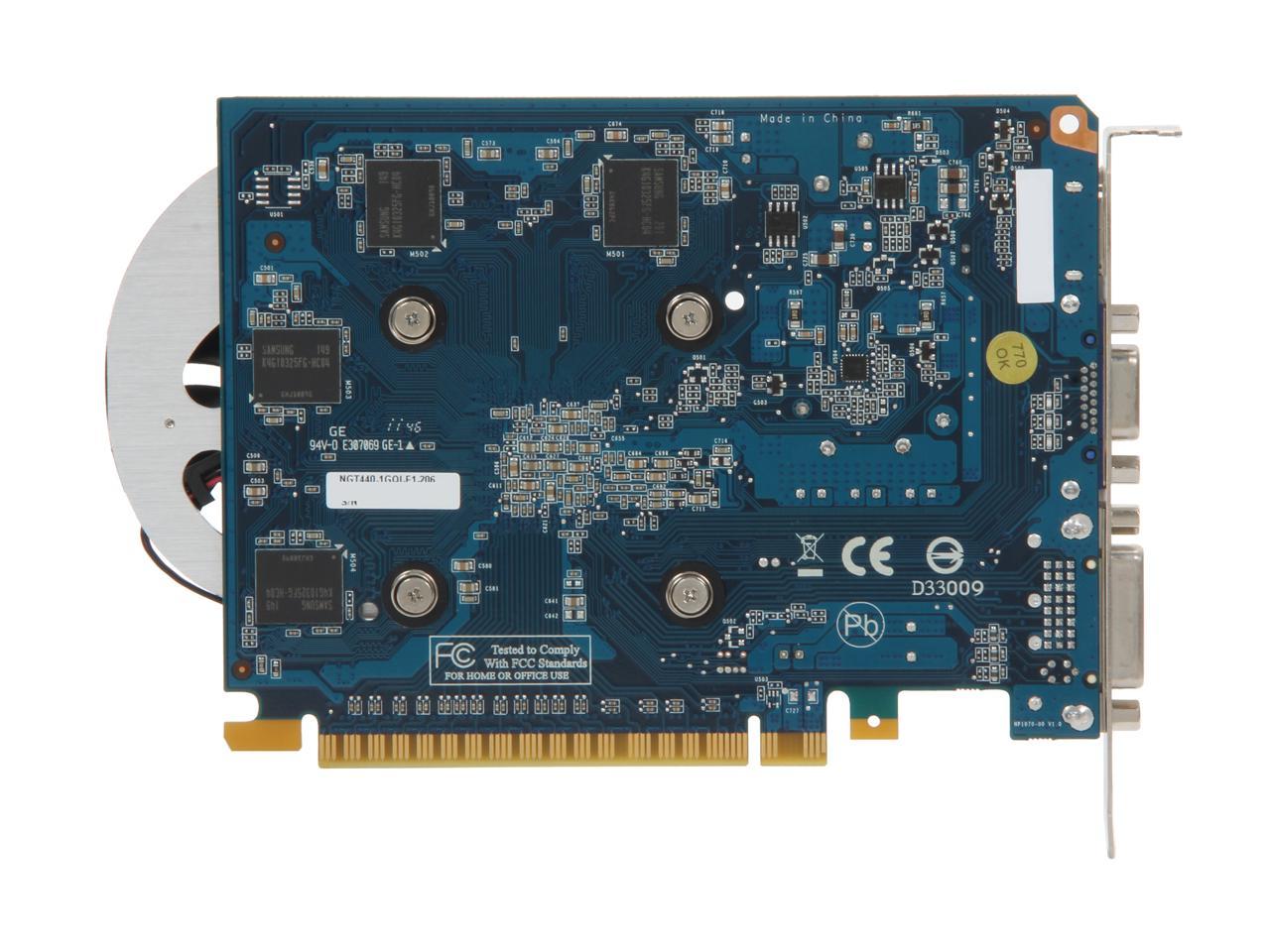 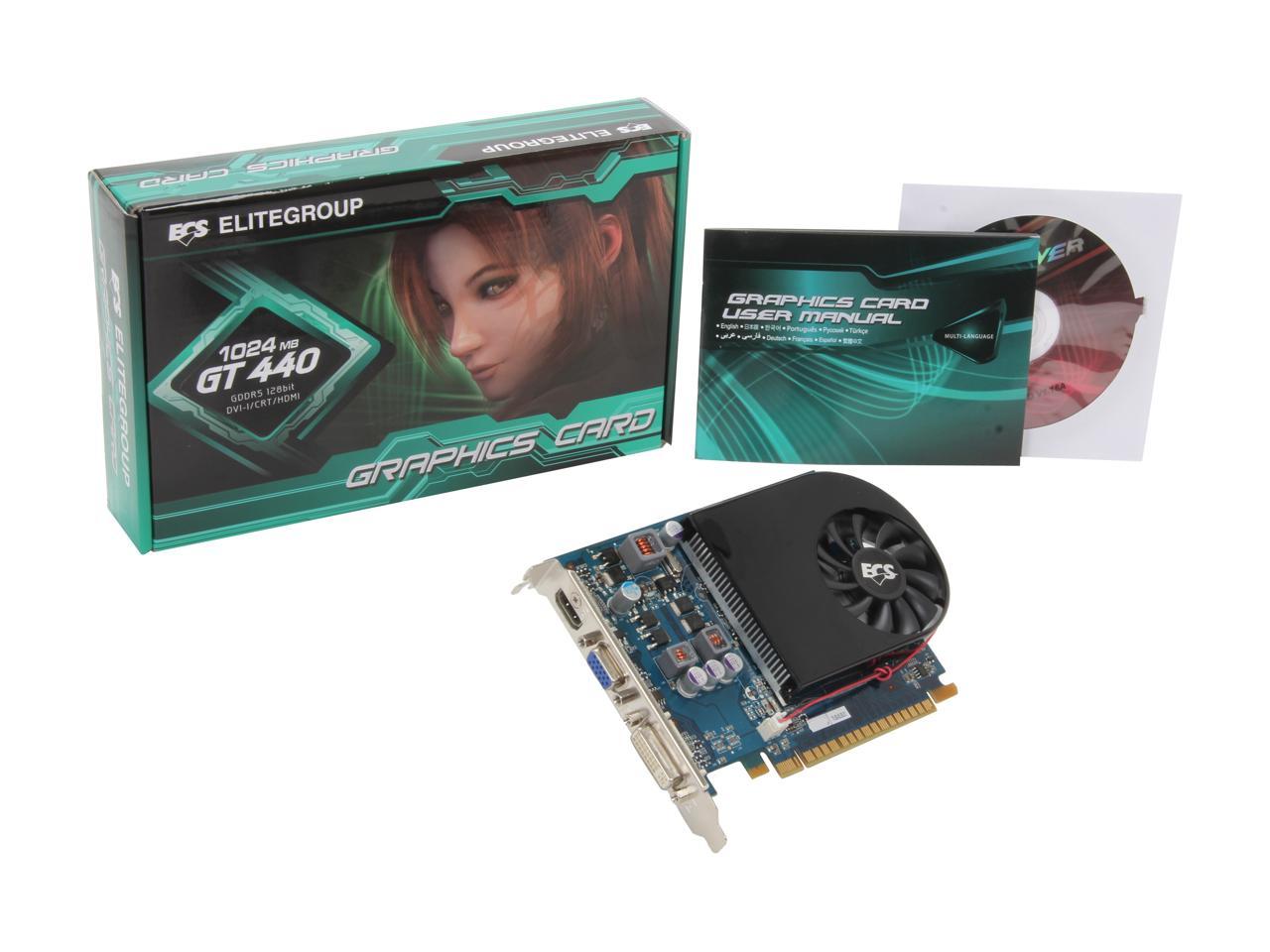 (35) Write a Review
OUT OF STOCK.
Specs
Reviews

Pros: Easy to install, Windows 7 found and installed drivers, for those who like Windows Experience Index, it went from a graphics 4.4 with my previous 9500 GT, to a 6.8. For those who like Shuttles, this fits in a Shuttle XPC easily. Seems to work fine with 300W power supply, and there are no needed power connectors for the card. Runs WoW just fine, and looks great.

Cons: Takes up a nearby PCI slot based on fan size. The driver on the CD it comes with is garbage, I did downloaded and install the latest drivers from NVIDIA. Fan is a bit more loud than my last video card.

Overall Review: I will try to remember to follow up and post an update. Overall so far very happy, especially given the price.

Pros: If you are on a low end computer, like myself, with a 300watt powersupply or somthing along those lines this is a great card. It is about as much preformance as you can squeeze out without going super in depth and updating everything. Sure, there are 130$ cards that are bomb, but if your a entry level gamer just starting to upgrade they are a waste up front unless you do a full system overhaul, your power supply will be to weak, and odds are your CPU will bottleneck the card anyway. That is why i highly recomend htis card for any entry level gamers not looking to get to much money into thier machine. It runs benchmarks roughly 300% higher then my old nVidia Geforce 8600 GT, and for 82 dollars, 57 after rebate, i dont see how you can beat that. Short version: Worth every nickle you spend on it if your not looking to go super high end on your computer.

Cons: It is loud as stated, but not 'that' loud. A lot of people exaggerate how loud it is. Personally i have a louder cpu fan to begin with so it for the most part sounds the same noise level it did when i had my 8600 in it.

Overall Review: For 57 dollars after rebate, there is NO gpu better for a quick update to a house computer to allow it to pretty much instantly play games. Yah, not at the highest settings, but in my personal opinion, on par or slightly better then an xbox 360 can.

Cons: The fan always runs on maximum RPM. It was so loud that I couldn't stand it and had to replace the heatsink and fan myself.

Overall Review: I bought this card for casual gaming. I have a ThinkStation E30 and the PSU cannot handle video cards that need more power. This card would be perfect, but it makes many times more noise than the 4 other fans in the computer together. I wouldn't buy this again.

3 out of 3 people found this review helpful. Did you?
Manufacturer Response:
We do apologize for the issues you had experienced with your fan. We understand that you have already replaced the fan but want to let you know that we are here to help you with any issues you may have. If you have any question regarding ECS product please feel free and don't hesitate to contact us. When contacting us, you can refer to case #ECD11101710007 I or any of my team members here at technical support will be able to help you. Our hours are Mon-Fri 9am-6pm PST. Thank you, Andy Phone# 1-510-771-0284 Email: andy_K@ecsusa.com
Anonymous
Ownership: 1 week to 1 month
Verified Owner
Knowingly Satisfied10/21/2011 9:17:43 AM

Cons: As already stated the fan runs loud, quite loud in fact.

Overall Review: This replaced a GeForce 9500 which ran around 115 F at idle. Great upgrade for me that includes around a 60% gpu improvement and substantial gain from DDR2 to GDDR5 RAM. Throughput and speed my friends. :) I've only been using this for a week so I can't speak to reliability. This would have been a 5 egger if it wasn't for the fan noise, but the fan and heat sink combined with lower gpu power consumption result in cool functioning temperatures. My modest build ran whisper quite before this card, but I typically use headsets so I can certainly live with the fan. My modest new build is now complete and for about $650 I have a box that runs the likes of Crysis 2 at med - high settings with a 3.1 GHz Sandy Bridge Core Duo, 4 gigs of G.Skill, a decent Thermaltake case with a 430 W PSU, a HD TV tuner card, a 1.5 TB HDD and a recently purchased Acer 23" widescreen monitor. All from Newegg. :)

Pros: 1GB of DDR5 memory for relatively low price. This card was bought by my boss to replace my 4 years HP workstaion's FX -1500 that only has 256 mb DDR3 memory Card is light but runs a lot better than my aged professional Quadro card though it was more heavier and more parts welded on. This card makes almost every settings available in Autocad c3d's "3d config" and large cad file opens, runs lot fast & smooth. (FX1500 was for hundreds of $!!)

Cons: Fan spins like crazy (but noise not belongs to louder)

Overall Review: The temperature right below 30 C so there is no need to let fan woking so hard, If there is a fan speed control that would make this card perfect. (my homecomputer's geforce 9800gtx has auto fan speed control, runs silent on normal load)

Pros: Better performance than I expected.

Cons: The alignment for the connectors are kinda un-aligned on my card. Conflicting with connecting dvi & vga. Have to set the card kinda crooked.

Overall Review: This card performs, stays cool (so far), and seems to run well on 350watts. The card I received had a large flat cooler that covered the gpu side of the card almost completely, and it is single slot. It should fit into tight places well.

Cons: My son has corrected me about my previous review. He says he can only run BF3 on medium settings, as someone else mentioned. I had seen him set it to the higher settings, but he says he wasn't getting a good frame rate when he used those settings. But he is still running Skyrim on high settings. I just wanted to submit this correction before someone bought this card expecting it to perform better than it actually will.

Pros: runs really really cool for me and I am just running stock air coolers. Barely peaked above the 45-50° C range running skyrim compared to +65° C on my previous card (gt 240). It's a loud fan, but it cools pretty well. I think that is a fair trade-off. Also Gddr5 for this price is great. A budget card well worth it.

Cons: I guess if you are a stickler for noise then it would bother you.

Overall Review: When the box arrived it was crushed in the corner. The card was undamaged thankfully. Also I hope the manufacturer honors the rebate. I hear too many stories about rebates never being honored.