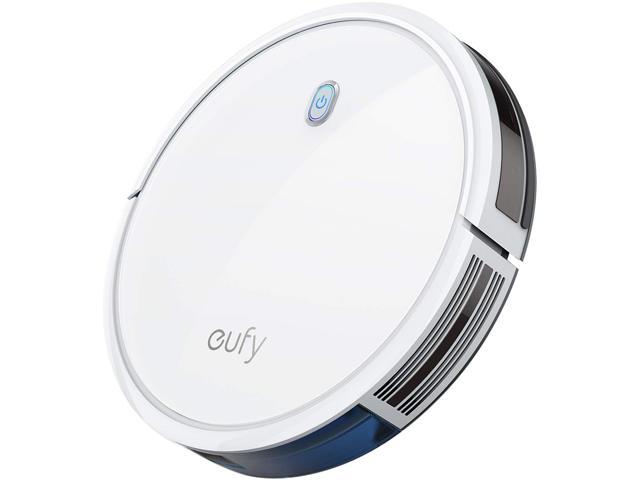 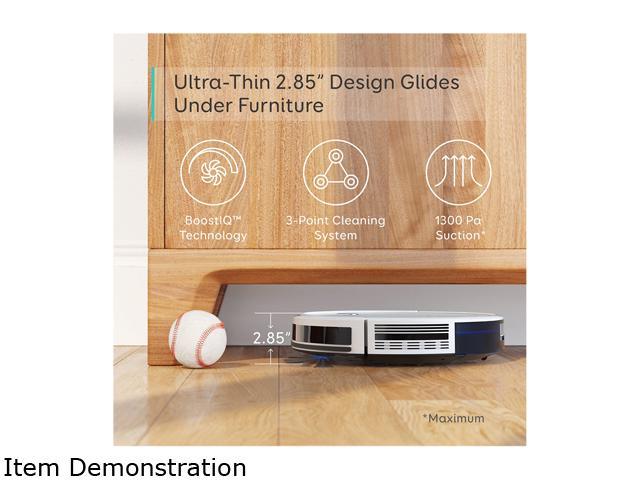 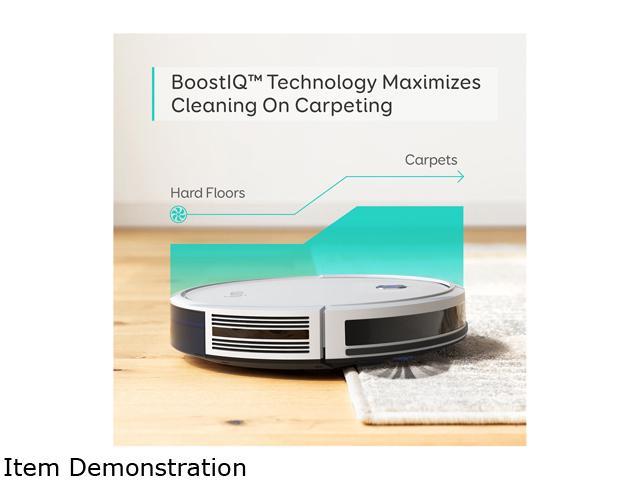 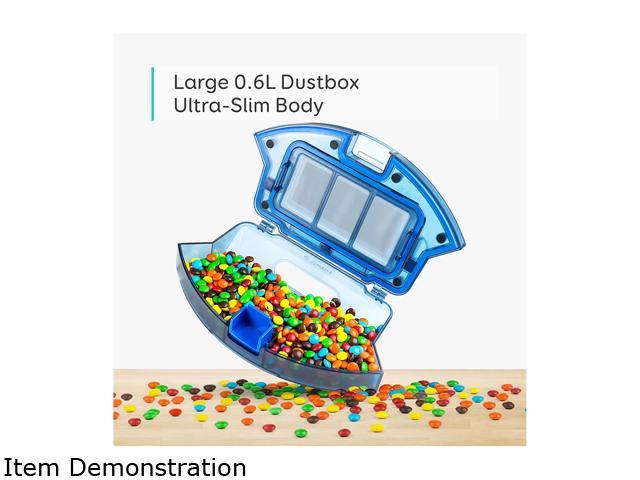 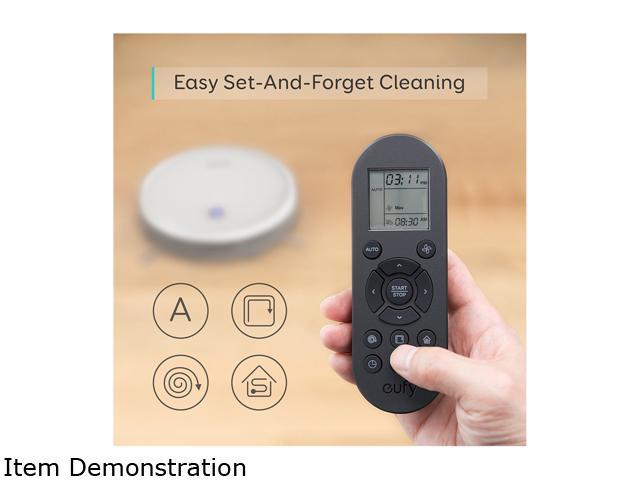 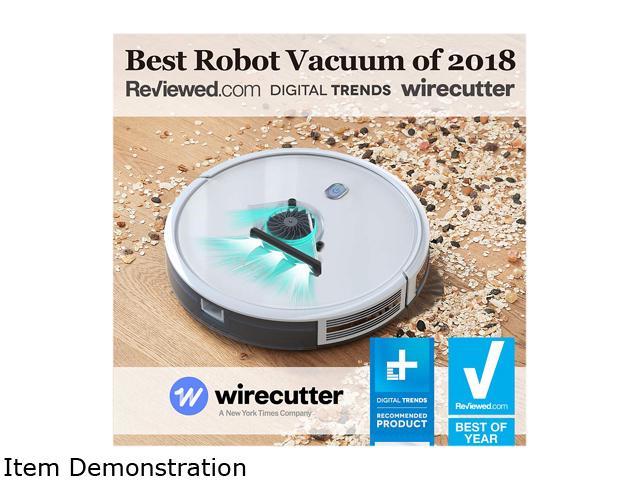 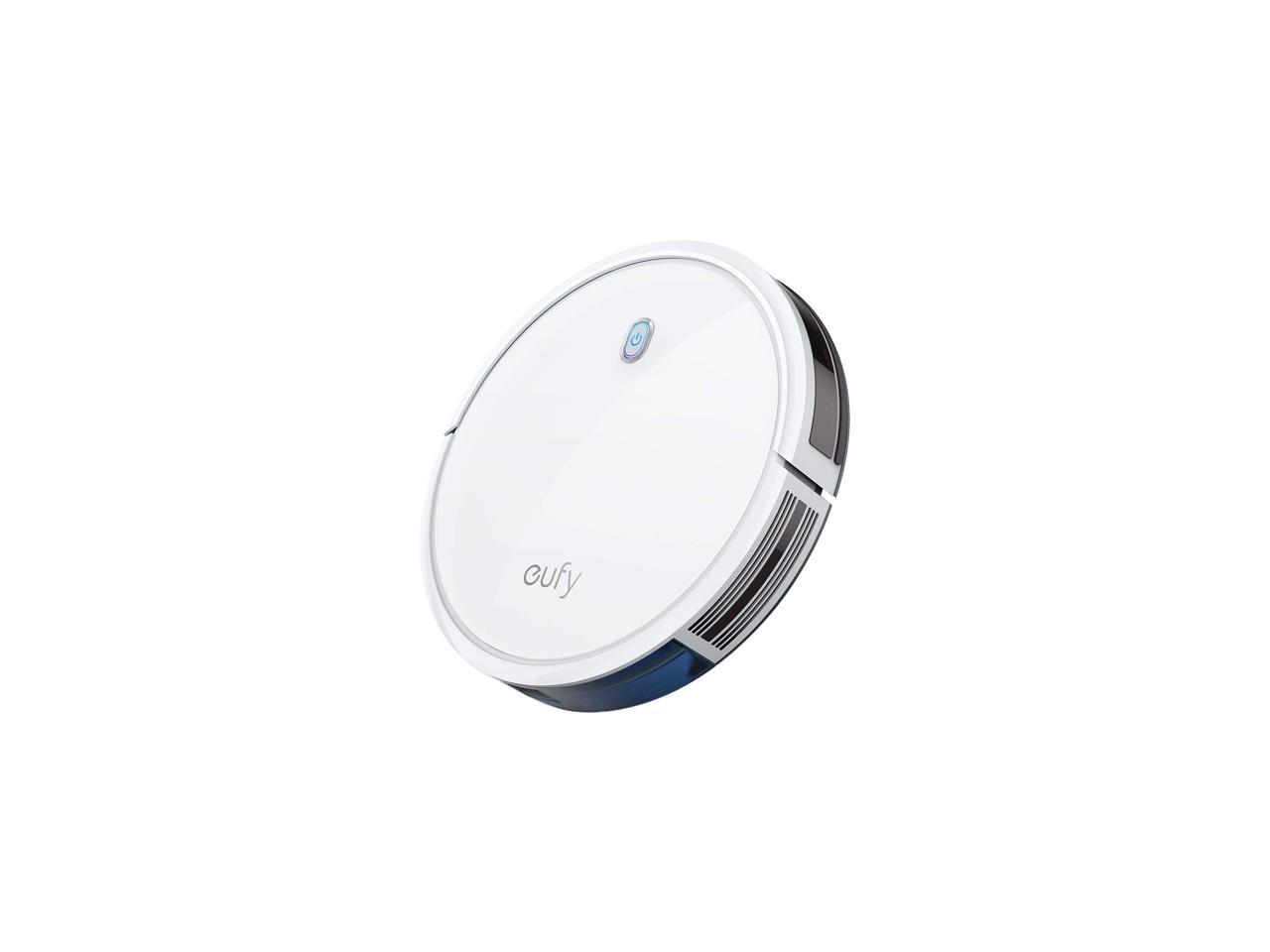 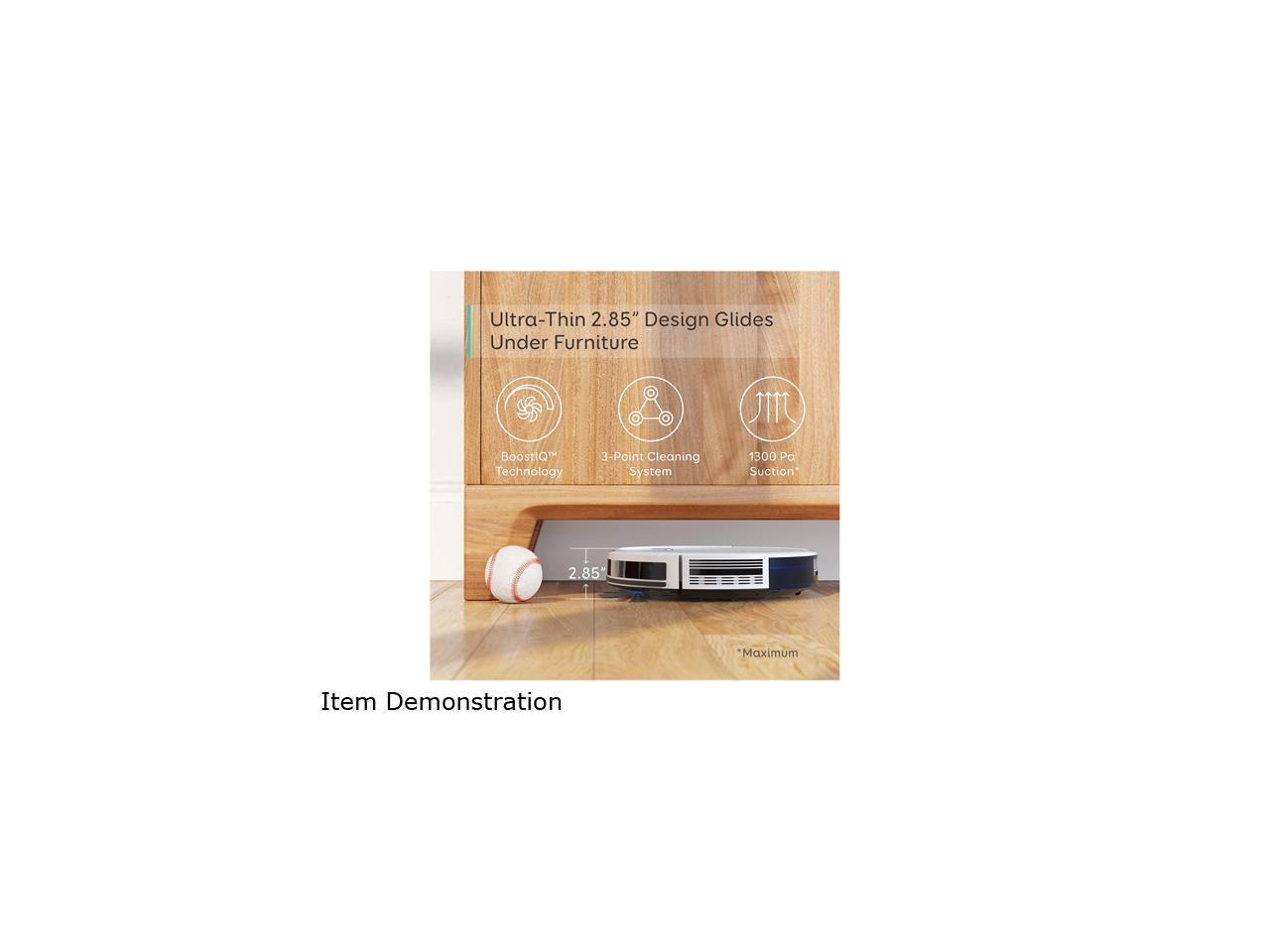 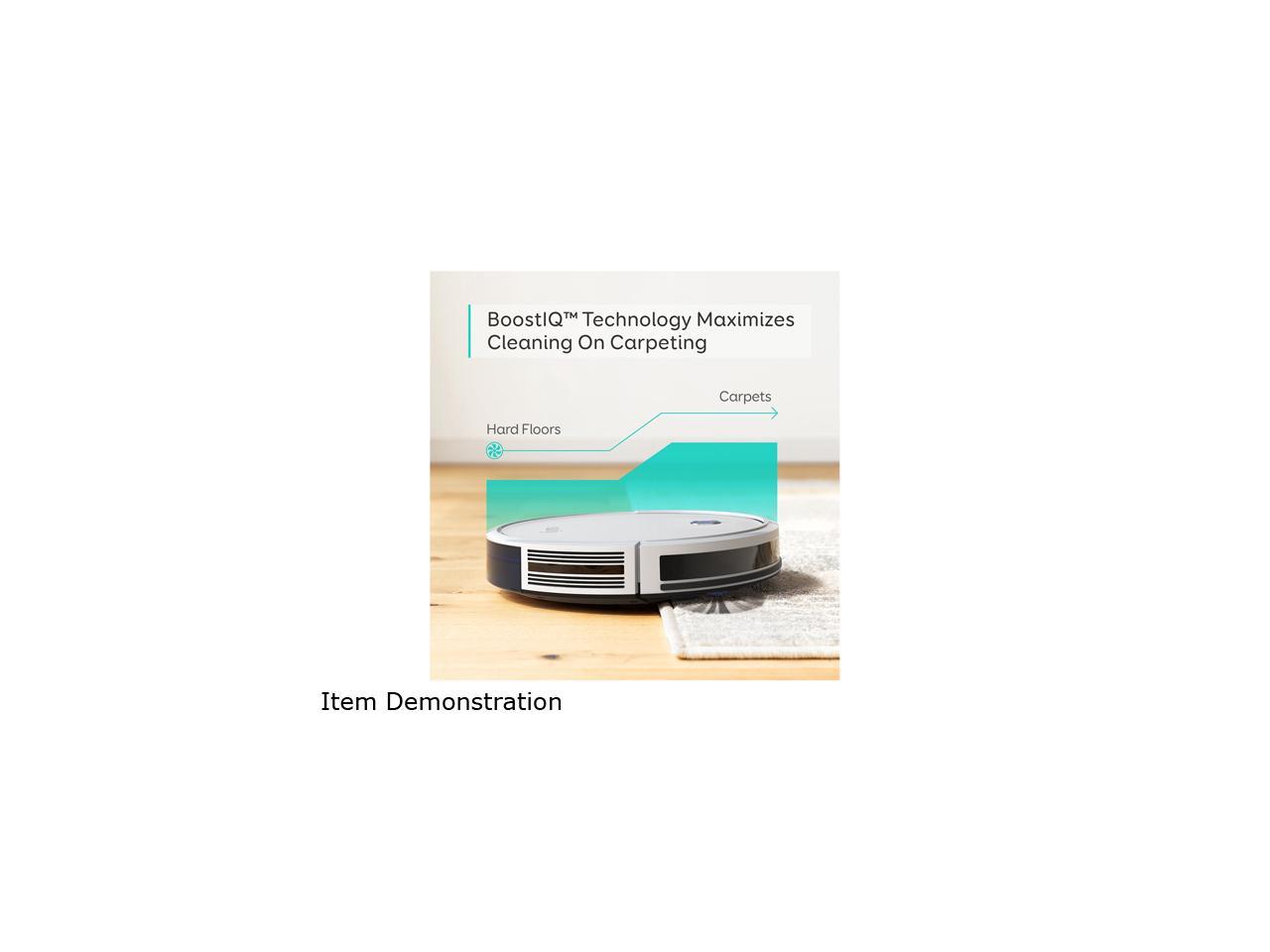 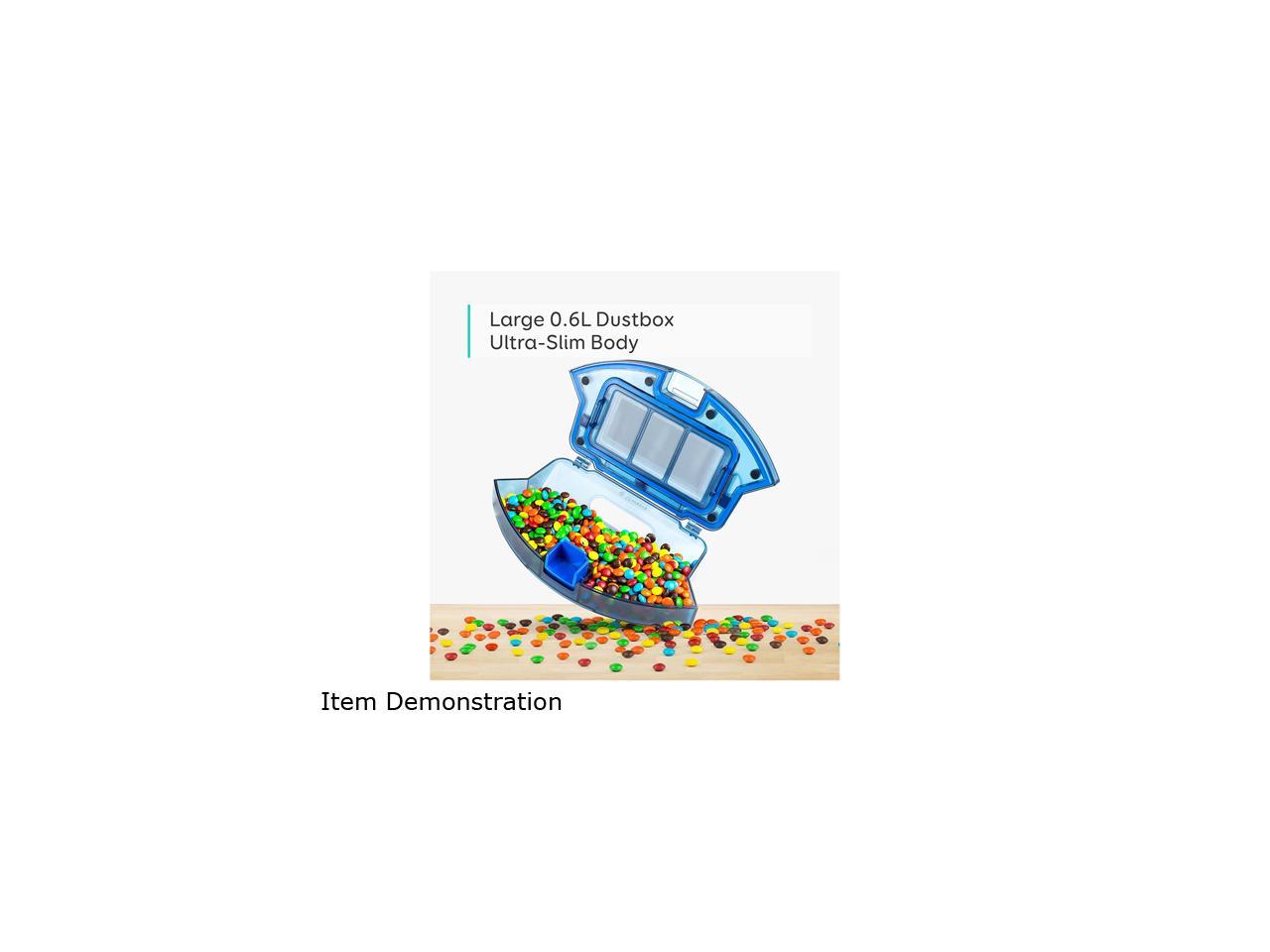 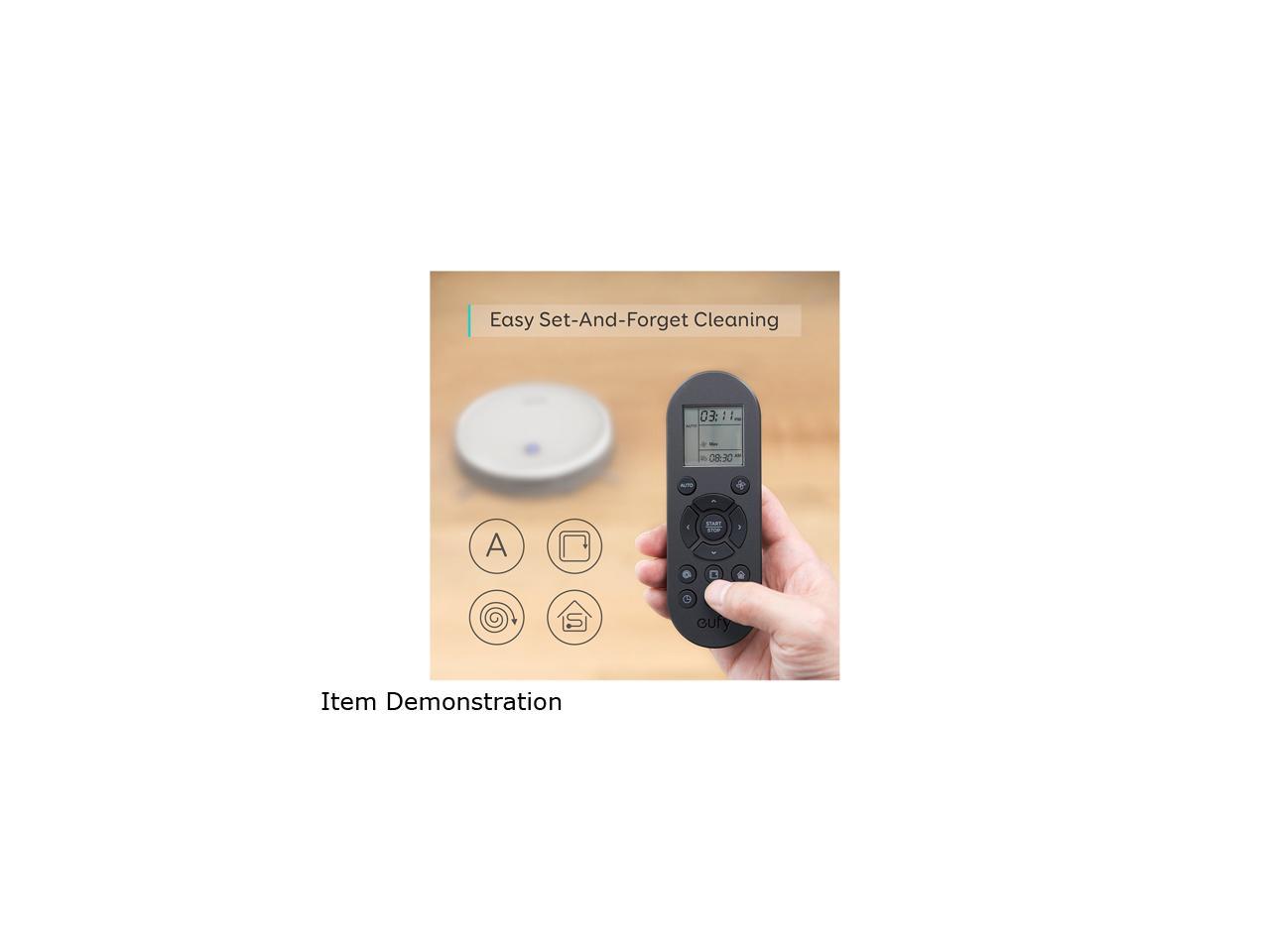 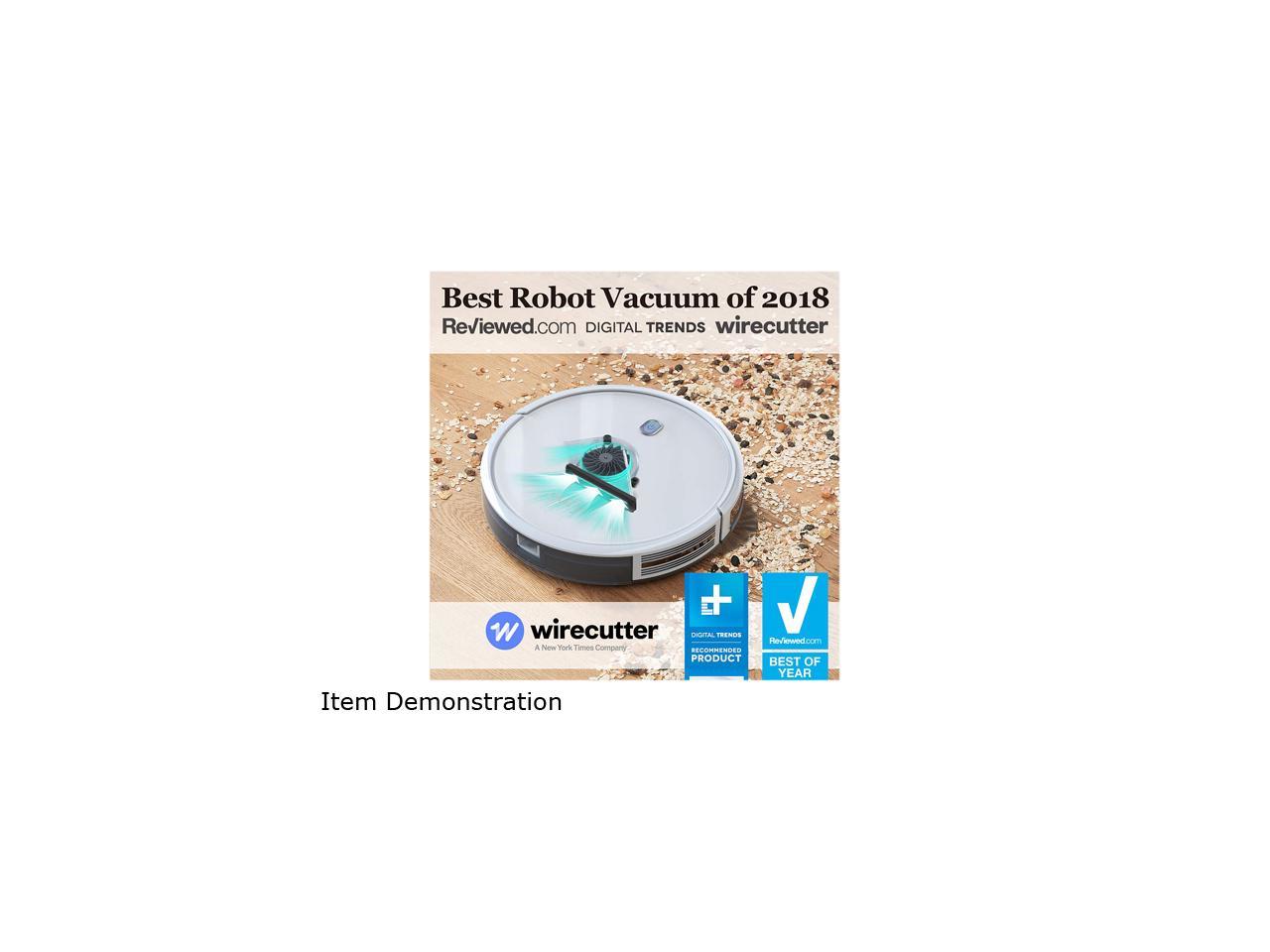 The Super-Slim and Powerful RoboVac RoboVac 11S sucks up dirt and dust with 1300Pa of suction for a spotless clean you can see and feel. Large wheels roll over carpets and climb over door ledges to get to the mess. RoboVac uses drop-sensing technology to avoid falling down stairs and off of ledges. RoboVac automatically returns to the charging base when power is low, ensuring it’s always charged and ready to vacuum. RoboVac combines a dual-layer filter and one high-performance filter to acheive a clean home. Multiple cleaning modes and a pre-set vacuuming time ensure an effortless, thorough clean while you do other things or nothing at all. RoboVac cleans up to 100 mins** per charge, so you get to enjoy a completely clean home from a single charge. A large 0.6L dustbox holds more dirt per clean to reduce the frequency of emptying.

Please follow the instructions in the user manual when deciding the position of the Charging Base to ensure automatic recharging.

The use of Bounce Navigation means that RoboVac will follow a random path when cleaning. This method is still proven to cover an entire room over time.

Cons: Dust clings to this thing like a needy girlfriend due to Electrostatic discharge.

Overall Review: I needed something to replace my 10 year old Neato robovac....this thing seems to fit the bill. The quiet, low profile nature means it isn't very noticeable while it scoops up the aging dust-bunnies under the furniture that too lazy to move. I have a very large great-room and watching it work kinda reminds me of a drunken sailor on Saturday as it wanders around bumping into things. After 2 hours of operation, I suppose the law of averages dictates full coverage by the Vac.

Pros: Multiple cleaning options affordable easy to use quiet doesn't fall down the stairs has some intelligence more than bouncing Doesn't integrate with Alexa or Google

Cons: Doesn't map Uses the bouncing techology Doesn't integrate with Alexa or Google 11S doesn't have the ability to have multiple scheduling options per day etc. Can only have 1 time preset per day.

Overall Review: I ordered two of these. One came fully charged and the other needed charging. On its first run, I kept an eye on it the whole time. It was a good idea because I found some cords that I didn't remember I had that I needed to bundle out of the way with the provided zip ties. I found it interesting that although it doesn't map, it does have some intelligence more than just bouncing. After a certain time in a room, it starts to do the edges. I have a dog that sheds a lot. We have 1600 sq ft on each level. We decided to set up on a daily schedule at 5 am. Yesterday, I ran it twice. Because it can get to places that we often couldn't, I had a lot to clean out of the reservoir and even the roller brushes the first time. The second time I had a full reservoir as well. The cleaning process is simple. We just got new vinyl plank flooring. We have tile in some rooms and the only carpet we have it small rugs in front of the exterior doors and in the bathrooms. Because of this, we don't have a bunch of old stuff hiding out in the carpet. We do have stairs and the technology has kept it from going down the stairs 100% of the time. We have darker floors. With our dark floors and running it in the dark at 5 am this morning it didn't go down the stairs. It was nice to wake up with clean floors and just a reservoir to cleanout. When I got up, it was recharging on the dock like it should be. Fun with the small rugs. I purchased low profile rugs. Since the rugs are new as well, they don't lay flat 100% yet. I put anti-slip things under the rugs. The rugs are where they were before they ran. It has had challenges getting on top of them, but it gets on top of them. The bathroom mats were thicker/taller and it had no problem getting on top of them. We decided based on the size of our home to put one upstairs, and one downstairs. After our test runs yesterday, we decided that we would create our own schedule for doing the bedrooms and bathrooms. That way I can make sure things are off the floor and the mats are removed for cleaning under and around them and then also when down so that eufy can clean them. Also for the first time in some bedrooms, we can be in there and make sure that cords are up etc. I don't have a large budget, so this works for me. Sometimes, less technology can mean a steadier product and less to break down. I also considered a different robotic vacuum that had a 2 in 1 with a damp mop function. That being said, the reservoirs were both smaller, and I felt with my dog, that wasn't a wise move. I have health issues and not a lot of energy. By scheduling the cleans before we get up in the morning, I can damp mop when needed while I am still fresh. I am very pleased so far. I purchased a 2-year warranty with it that will go into place after the one year warranty is up.

Pros: Its not on wifi Its thoughtfully designed for cleaning It cleans alot

Cons: you have to clean it the brush to clean it broke after repeated use have to replace brushes after a while battery only last 1-2 hours

Overall Review: worth every penny...if you are thinking about getting this. Get it

Cons: - Gets stuck a lot under couches and beds or on slightly raised surfaces - Doesn't "learn" the surrounding area so it keeps getting stuck in the same places - Doesn't have a set pattern, just goes until it bumps into something and then tries to move around it or turn completely around, no obvious method to the madness - Hits feet all the time - Sometimes doesn't grab everything and instead flings it across the room - Already had to replace right wheel and bumper - Has a hard time finding "home" when it needs to recharge and sometimes doesn't make it home before dying

Overall Review: - I would purchase again, though I do wish it had smarter sensing and mapping - That 2 year warranty - Lots of cheap replacement parts on popular online stores (off brand, but works identically) - I'm amazed at how much dirt and hair gets picked up. How nasty was my house before I got Eufy??

Pros: Great vacuum power Docks itself to recharge Pretty quiet Oddly my two Rat Terriers aren't bothered by it at all. O.o Can be programmed on a schedule Transitions from hardwoods>tile>carpet fairly easily

Overall Review: So far this thing has been impressive. It is my first robot vac of any kind and I am surprised at how much I like it. We have two small dogs that really get worked up with guests, and the regular vacuum, but don't seem to care at all about the robot vac. It is quiet unless its on hardwoods under your feet, then it is kind of annoying, but schedule it to run when your not around, like its intended and I think its great. The debris capacity seems like two cycles and it needs emptied. It seems to have plenty of charge in our 1500 Sq Ft home. Mostly hardwood, with two tile baths and two carpeted bedrooms.

Pros: To be determined.

Cons: Side brushes fall off easily.

Overall Review: I bought this to clean a studio apartment. It does not appear to be up to the task. There is a large, low, area rug at the center the of the apartment and the vacuum loses a side brush every other time it runs into it. This means it loses a brush every couple of minutes. If I have to babysit it while it randomly wanders around a tiny apartment for 40 minutes then what is the point? I should have bought a regular vacuum.