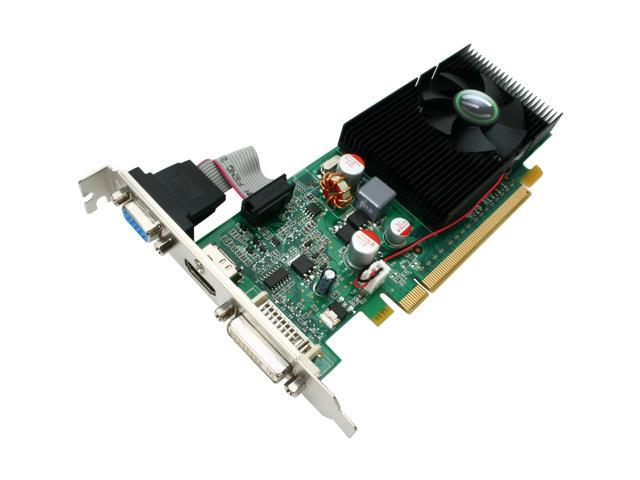 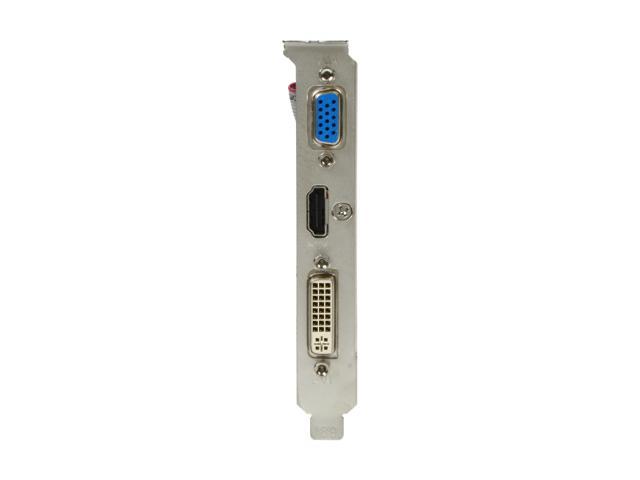 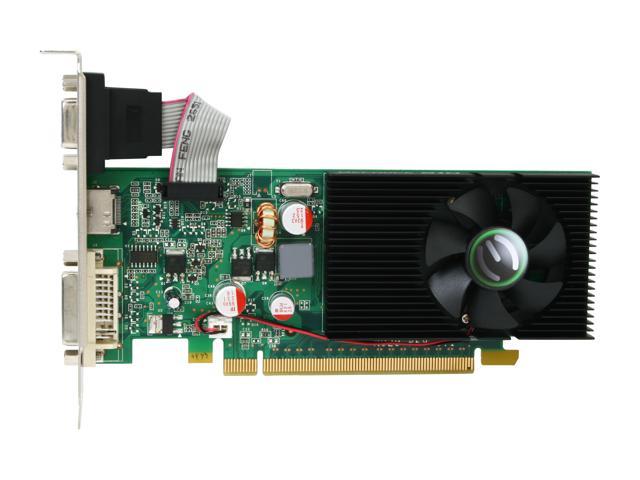 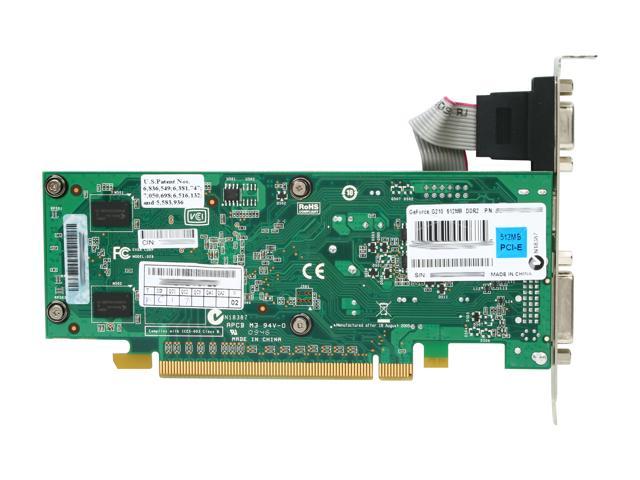 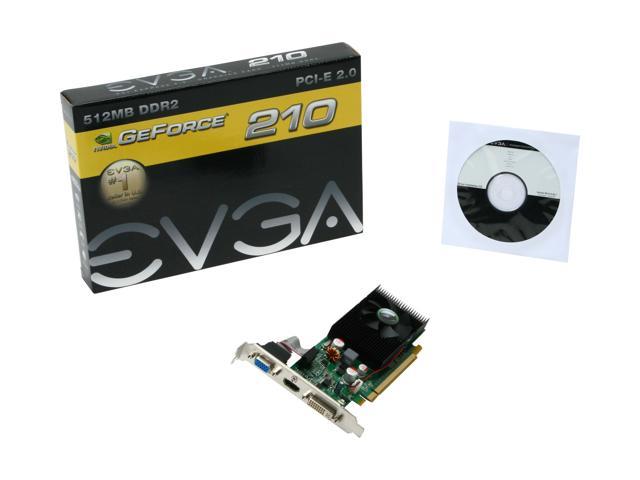 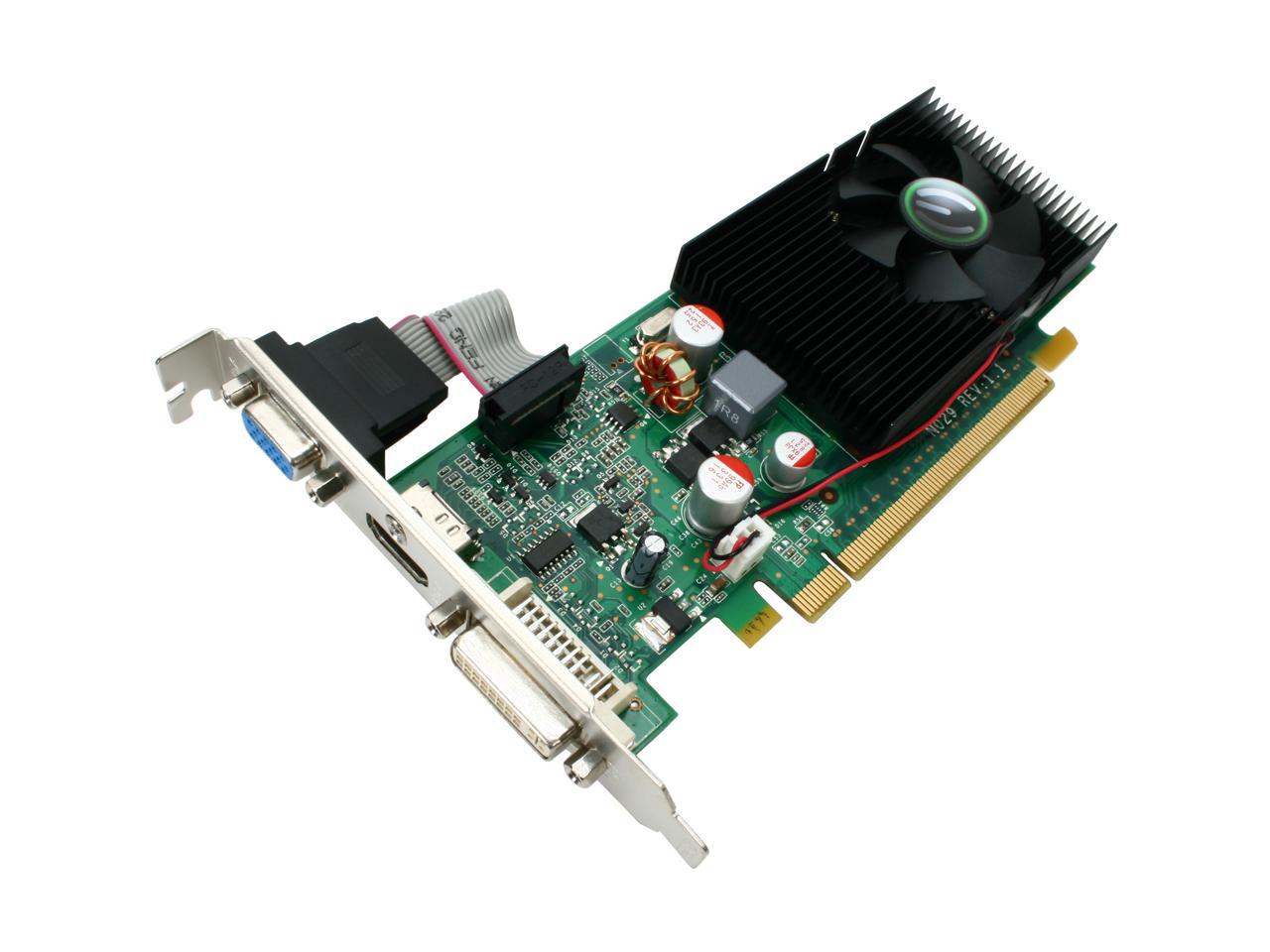 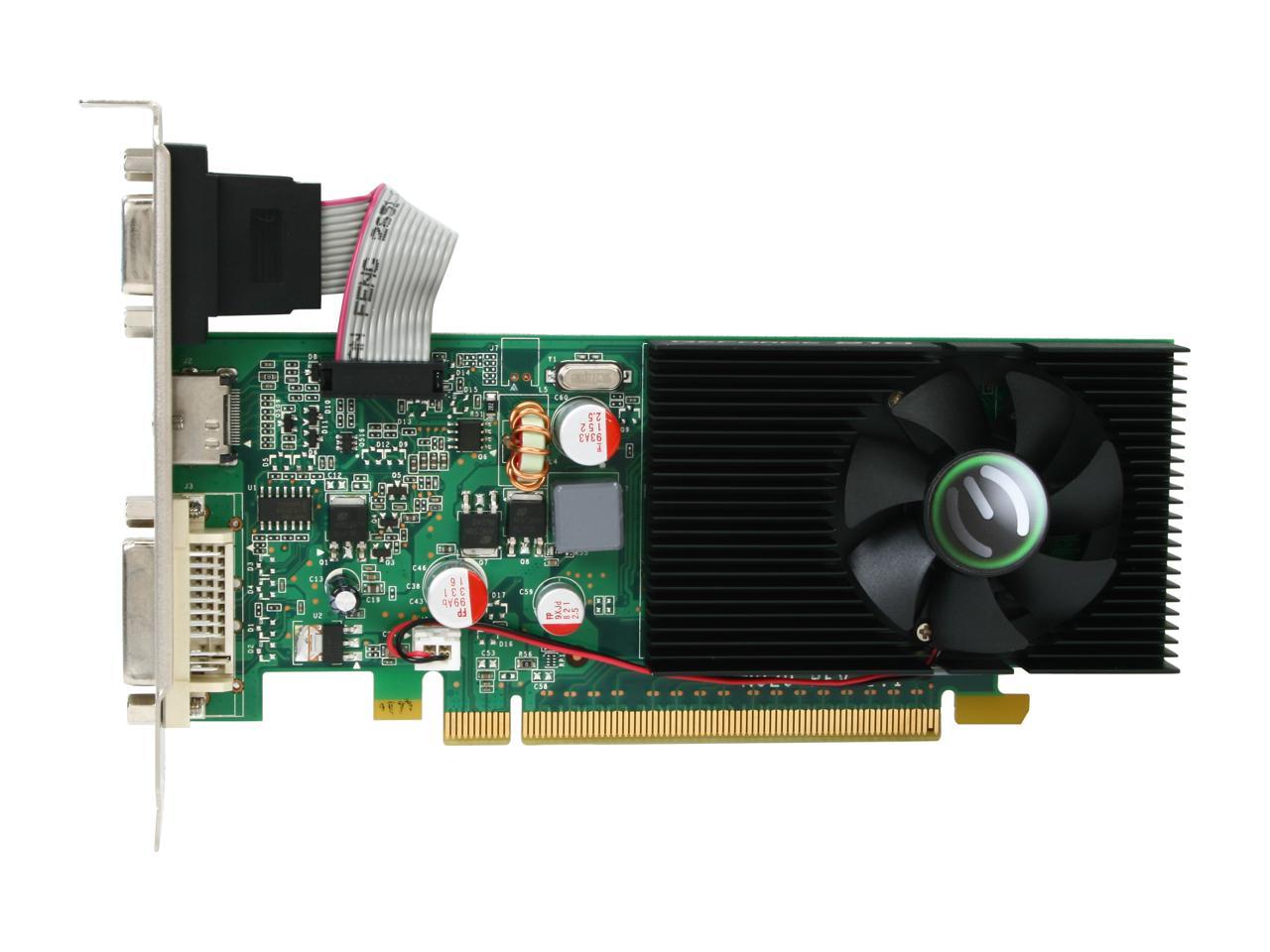 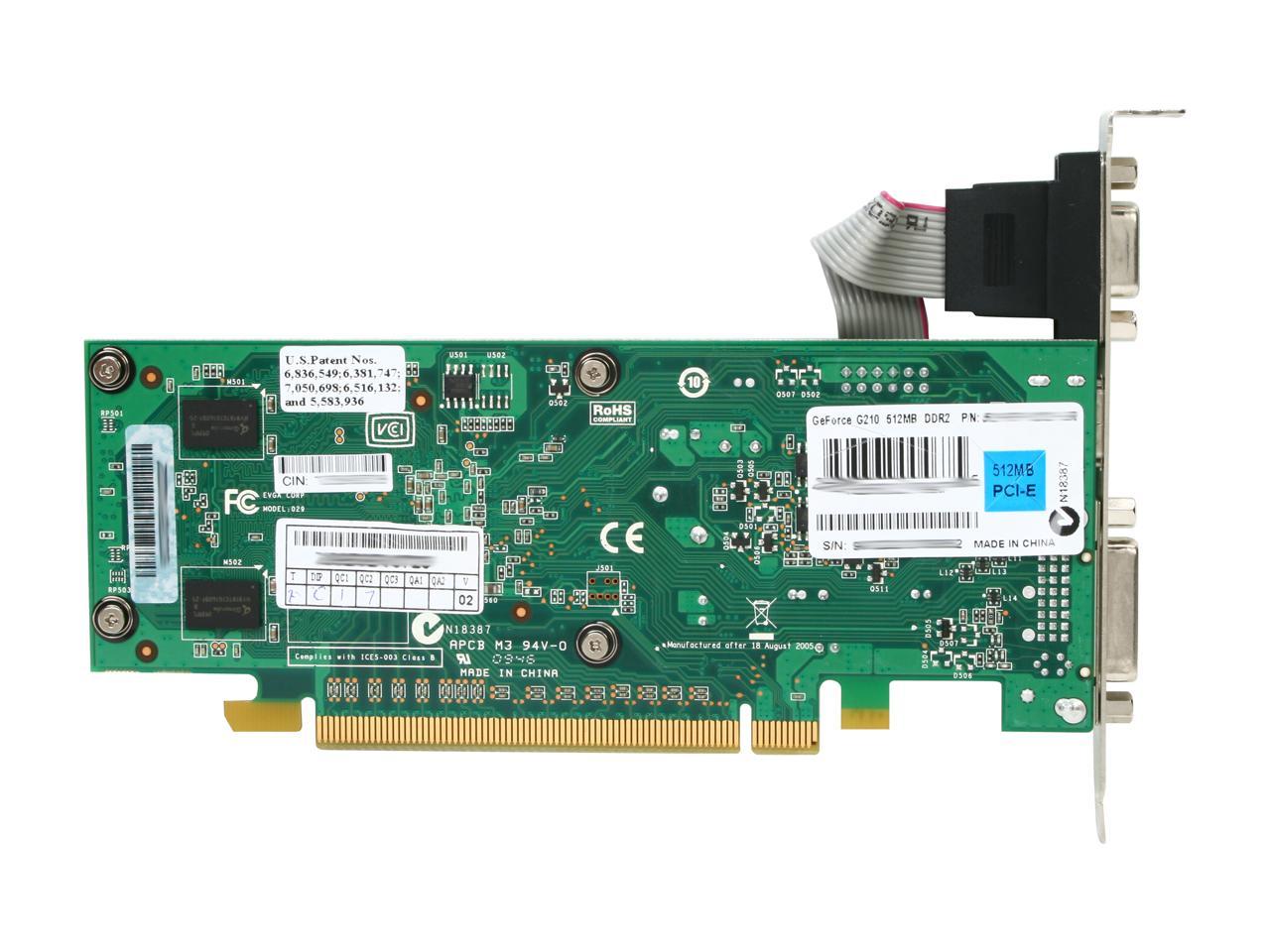 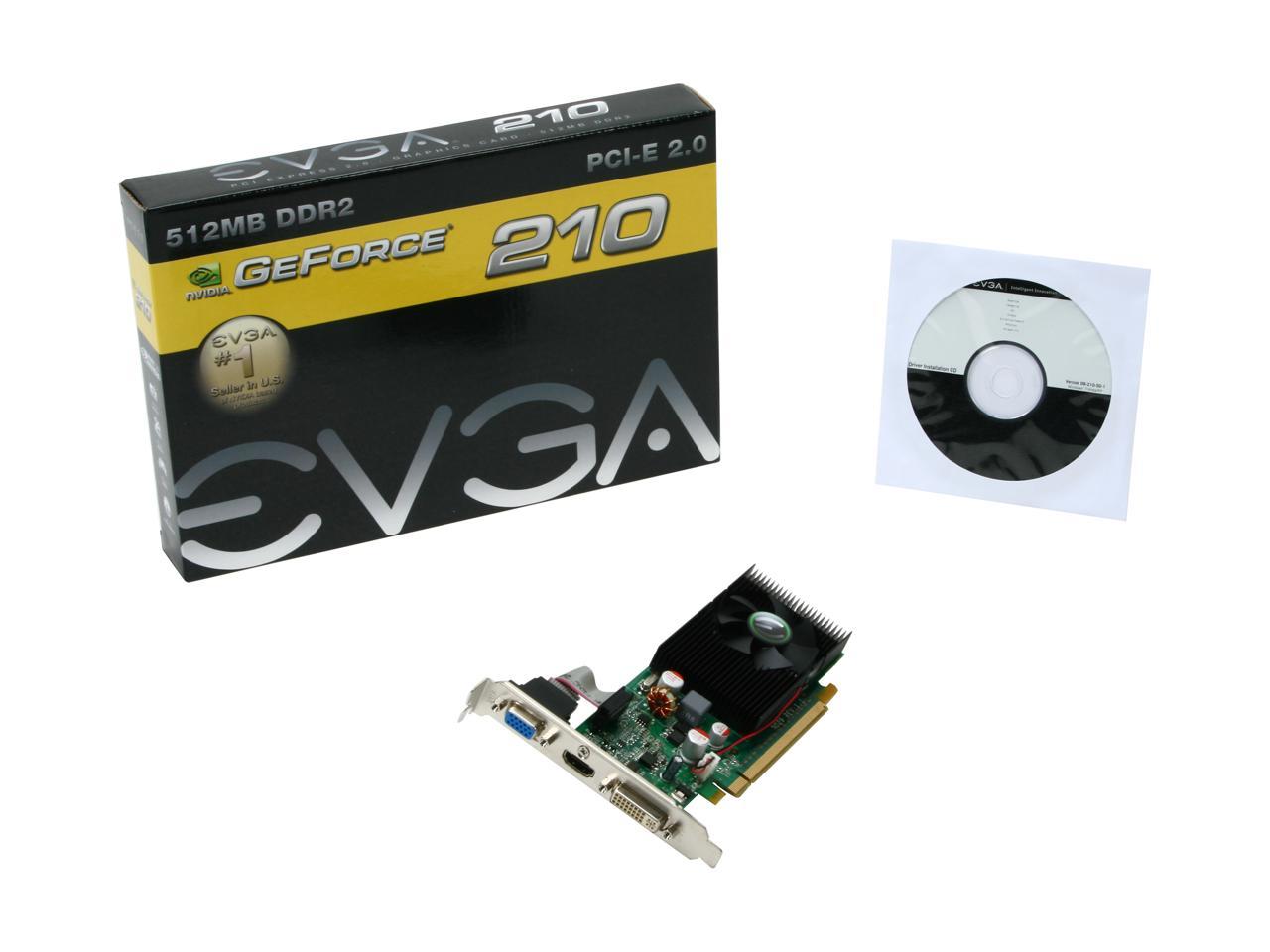 (58) Write a Review
OUT OF STOCK.
Specs
Reviews

Pros: After MIR, $9.99!!! When you're presented with the option of an i5-651 (dual core w/ on chips gfx), or an i5-760 (quad core) plus this card... for $10 you got a ton more computing power. For system that has to be used as a application server for 5 clients + a workstation... that's a significant jump in performance for such a small price! The card is excellent in Win 7 w/ Aero. Perfect for great video playback as needed and more than what's needed for simple workstation graphics.

Overall Review: This is going in a commercial build for a small business client. The choice was either an i5-651, or an i5-760 + this card.

Cons: Really is no faster than some of the integrated solutions - however, it will not leech off of your system meory capacity/bandwidth. Your motherboard chipset will also be cooler if you use this over an IGP. As stated by others the memory is 400MHz (DDR2 "800 effective"). Uses the same Samsung chips as my ATI 4650 card which clock to 550 just fine on the ATI card - though Ntune and EVGA Precision limit the memory overclocking to 486... darn! Supposedly pushes 2.3MPixel/s and 4.6MTexel/s w/6.4GBps memory bandwidth. I know those are low numbers but I feel like I'm really not getting those numbers. I often use ATI stuff these days and I don't know if it's shader power or what but I feel like an ATI card withthe same ratings would get a slightly higher framerate in games... just saying, not trying to bash - the ATI 4350 is identical in numbers to this card and is roughly 50% faster in some benchmarks......!

Overall Review: I got this for 6 dollars after rebate. I got an ATI 4650 for Around $27 after rebate. If you want to be able to play games here and there the 4650 (claimed to be too slow for games by most gamers) is like greased lightning compared to this card. Overclocking the memory from 400 to 486 provided roughly a 10% increase in benchmark performance - however, clocking the gpu from 589 to 650 did virtually nothing. I expected this thing to kinda "wow" me and do about half of what the 4650 could do... not even close, it was pitiful - both in a 32 and a 64bit OS with the latest driver straight from Nvidia. I know that this thing is crippled by it's LOW memory bandwidth, but I think it is more or less the whole package that does it in. It is almost as if there is some inherent limitation in the mix that shouldn't be there. The pixel/texel output from the card should be enough to play a game or two with detail turned down, but all it really does is disappoint. Great little card for NON-3D

Overall Review: Got this for close to nothing after rebate. It's a real nice cheap basic card. Has VGA, DVI and HDMI output so flexible there. And it's quiet (irrespective another review or two) and does exactly what it's supposed to do. I use my machine at present to edit some video, do Photoshop and watch some Netflix. I'm sure the card would fall all over itself in moderately heavy gaming but, for a basic card, it's real nice. I haven't tried the included overclocking software because I haven't needed to... but I expect that I'll be playing with it before long. Just another added plus of a nice card. (Just hope that rebate eventually turns up!)

Pros: After a 4 hour driver installation battle it works (mostly). Runs cool, offers all the latest nVidia acceleration features at a low price.

Cons: The fan has no PWM control, it runs at full blast all the time regardless of temp and it's NOISY. My system is literally twice as loud as it was before overall. Major driver compatibility issues with WinXP.

Overall Review: I purchased this to replace a GeForce 7 series that was failing (was causing shutdowns during bootup). I'm not a gamer and just needed the hardware video acceleration and dual monitor output heads. I now wish I hadn't gone for the lowest price solution because the noise levels were not worth it. I assumed a low power card would run quit, and I assumed wrong. Also, Windows XP users beware: it took me hours and multiple BSODs to get this card working due to the fact that the driver installation would hand and fail. I traced it to the nVidia HD Audio drivers which support audio on the HDMI port and was able to get the drivers to take by skipping this portion of the install. I'm not currently using the HDMI port anyway, but am now curious whether it works at all given the issues I had. My advice would be to spend an aditional $30 and get a superior and quiet running GT430 series card instead.

Pros: This is a great little video card for low-end and budget minded buyers. Very quiet and easy to install. Already had the latest Nvidia driver installed from my previous on-board graphics chip, so was literally a case of plug-n-play. Definite improvement in HD video play back.

Overall Review: It won't play the newest games on high settings, but you knew that already right? Well I can at least play Counter-Strike Source, Battlefield 2, and MS Flight Simulator 2004 at 1440x900 with medium-high settings.

Cons: Fan is a tad bit loud at default settings, but there is software available to control fan speed.

Pros: Mine uses SAMSUNG K4N1G164QE-HC20. The data sheet on Samsung's website lists the max frequency on these chips as 500MHz. So if yours has those chips..... why are you still at 400MHz?

Cons: Nope - none, unless a person paid full price. For $6 this card has no flaws. It performs better than a $7 extra value meal ;)

Pros: Pros—Ran great out of the box for $20 after rebate! It boosted my Windows Experience score for Graphics from 3.0 to 4.0 and my Gaming graphics from 3.0 to 5.1. The GPU runs at a cool 38 Celsius and the colors look great. I’ve bought 4 other cards are bargain basement closeout to beef up my old Compaq computer and this card definitely did the trick. It has slightly lower score on passmark 7.0 but boosted the windows experience the most.

Cons: Cons—The memory is listed 800Mhz on the webpage but EVGA precision software says it’s running at 400MHz. You can get a little more out of the card with their software but not enough to make a real difference. I guess if you want that much better performance you should jump up to the GT 240 or higher.

Overall Review: Other – Make sure your Power Supply support this card. You need a minimum of 18 amps on the 12V circuit so I had to swap my power supply. Luckily for me they’ve been running specials on those and I picked one up for $15.