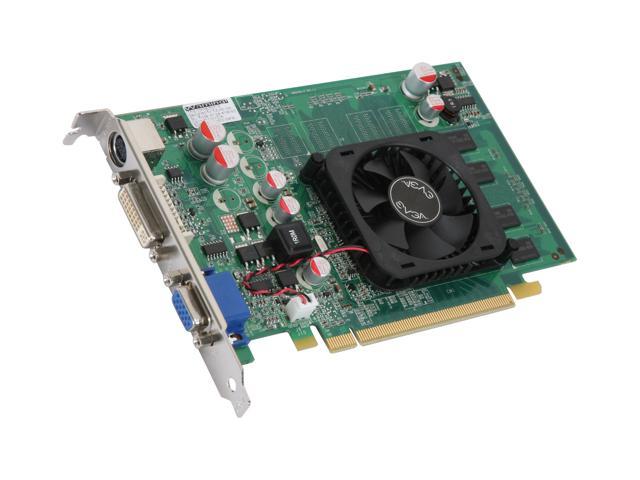 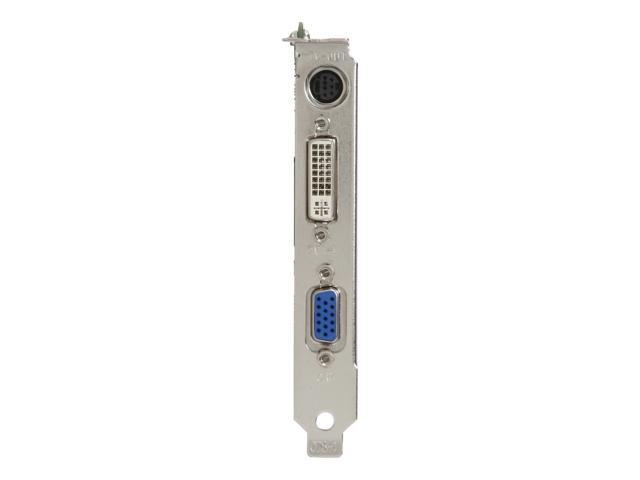 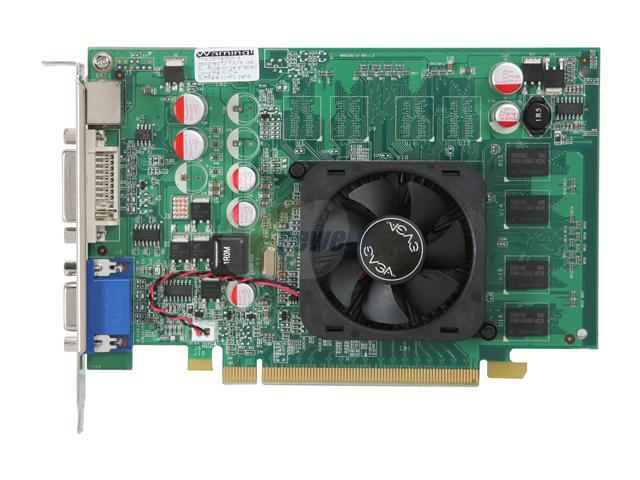 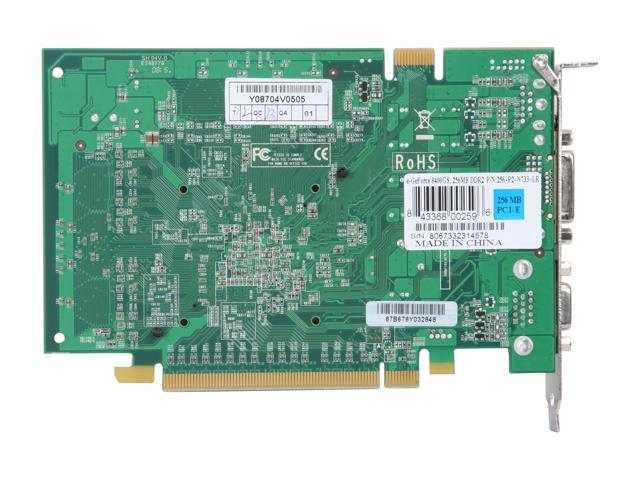 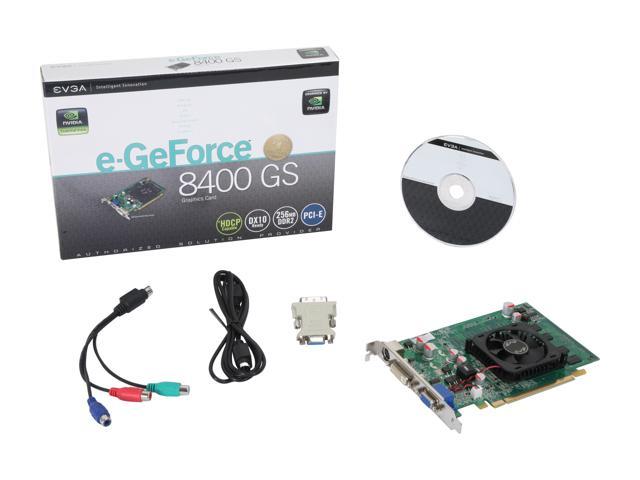 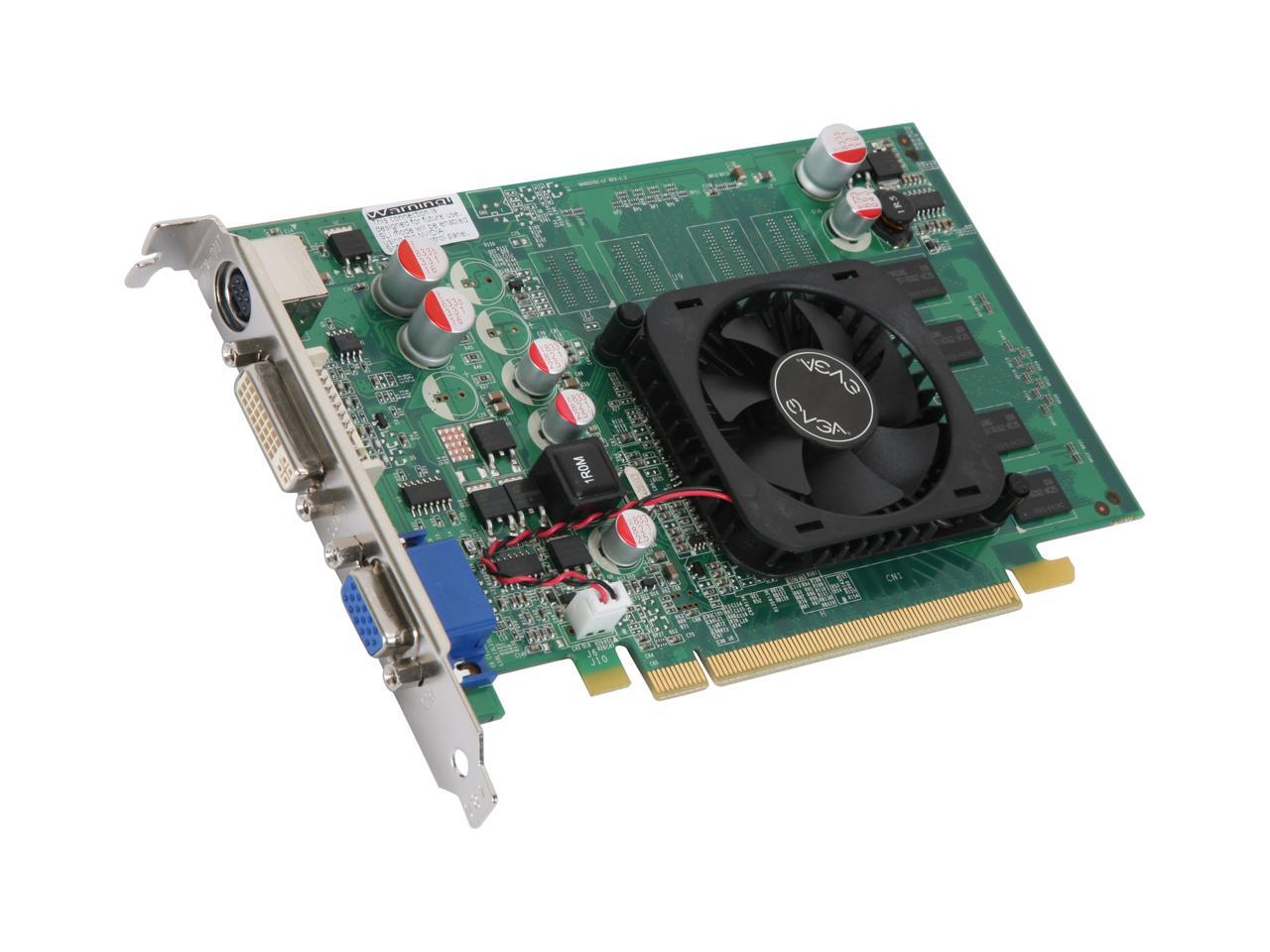 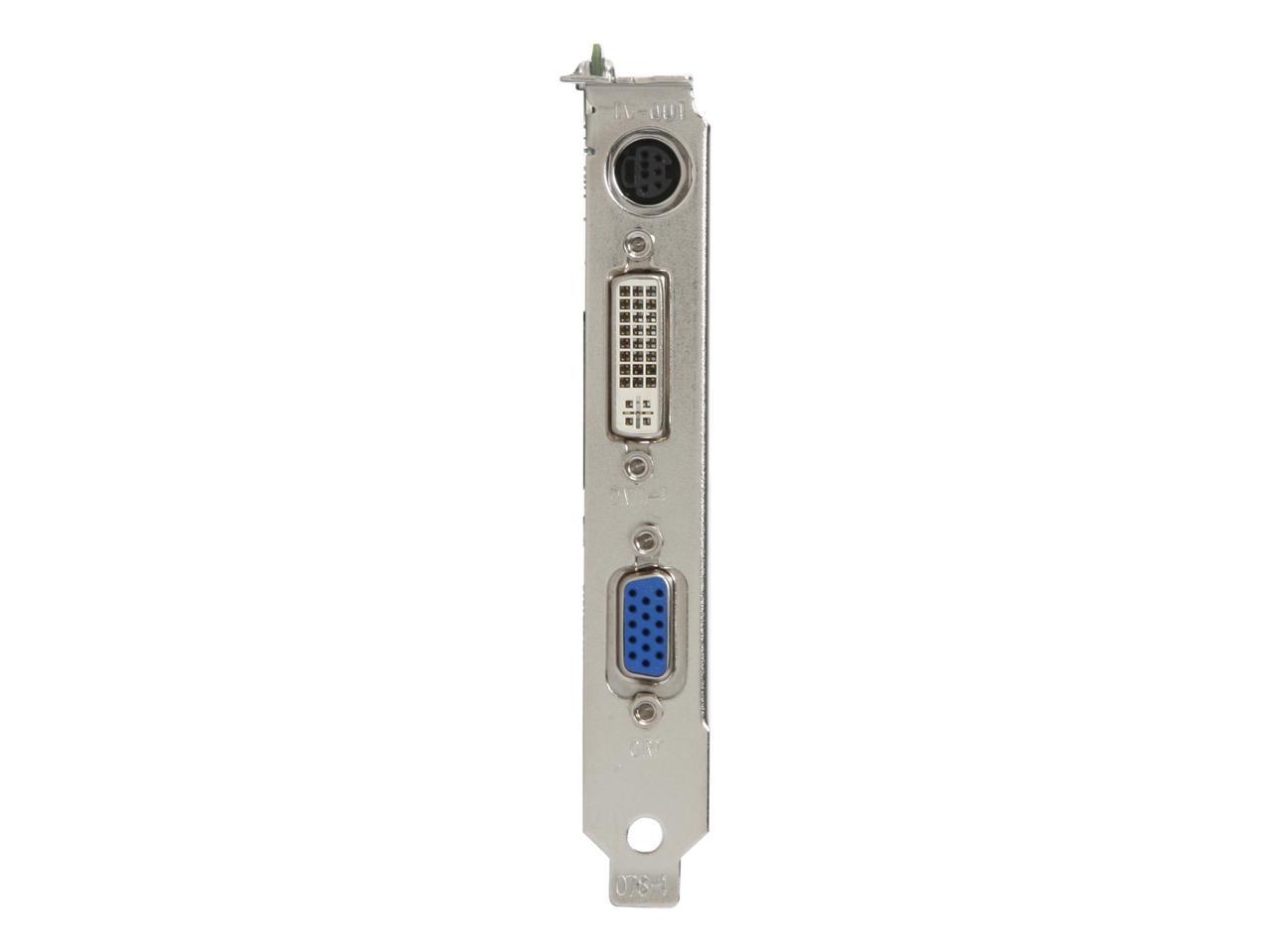 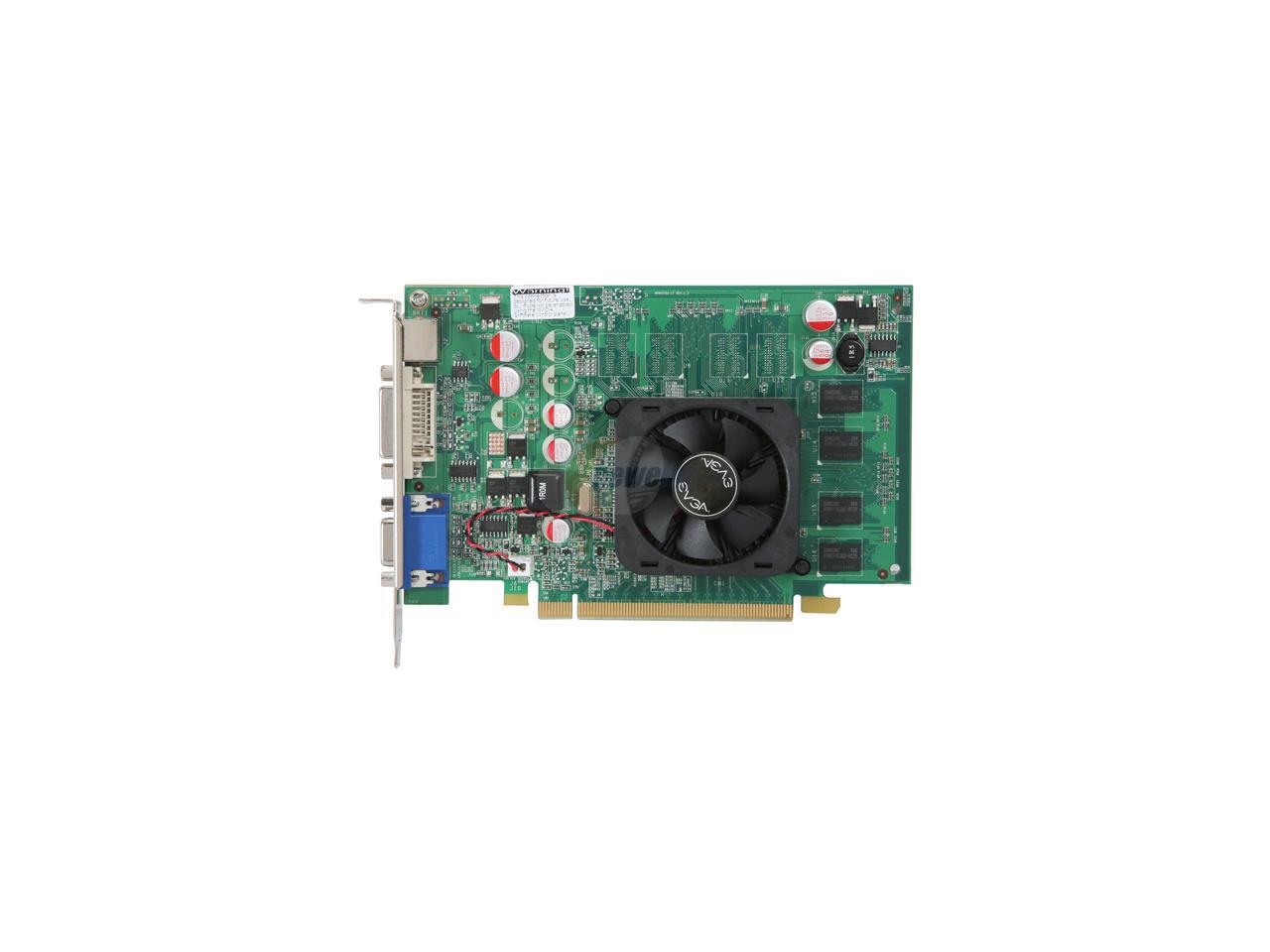 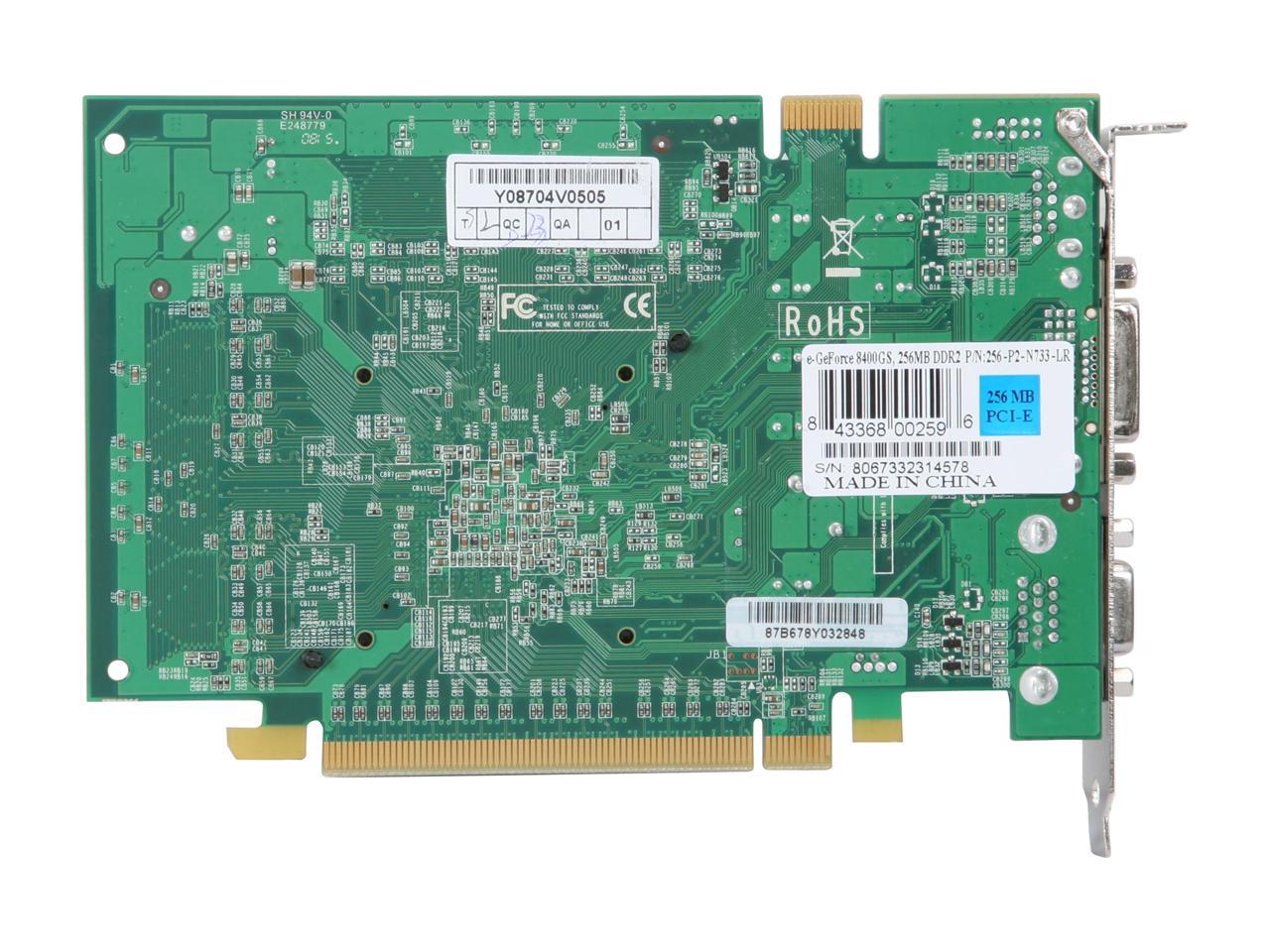 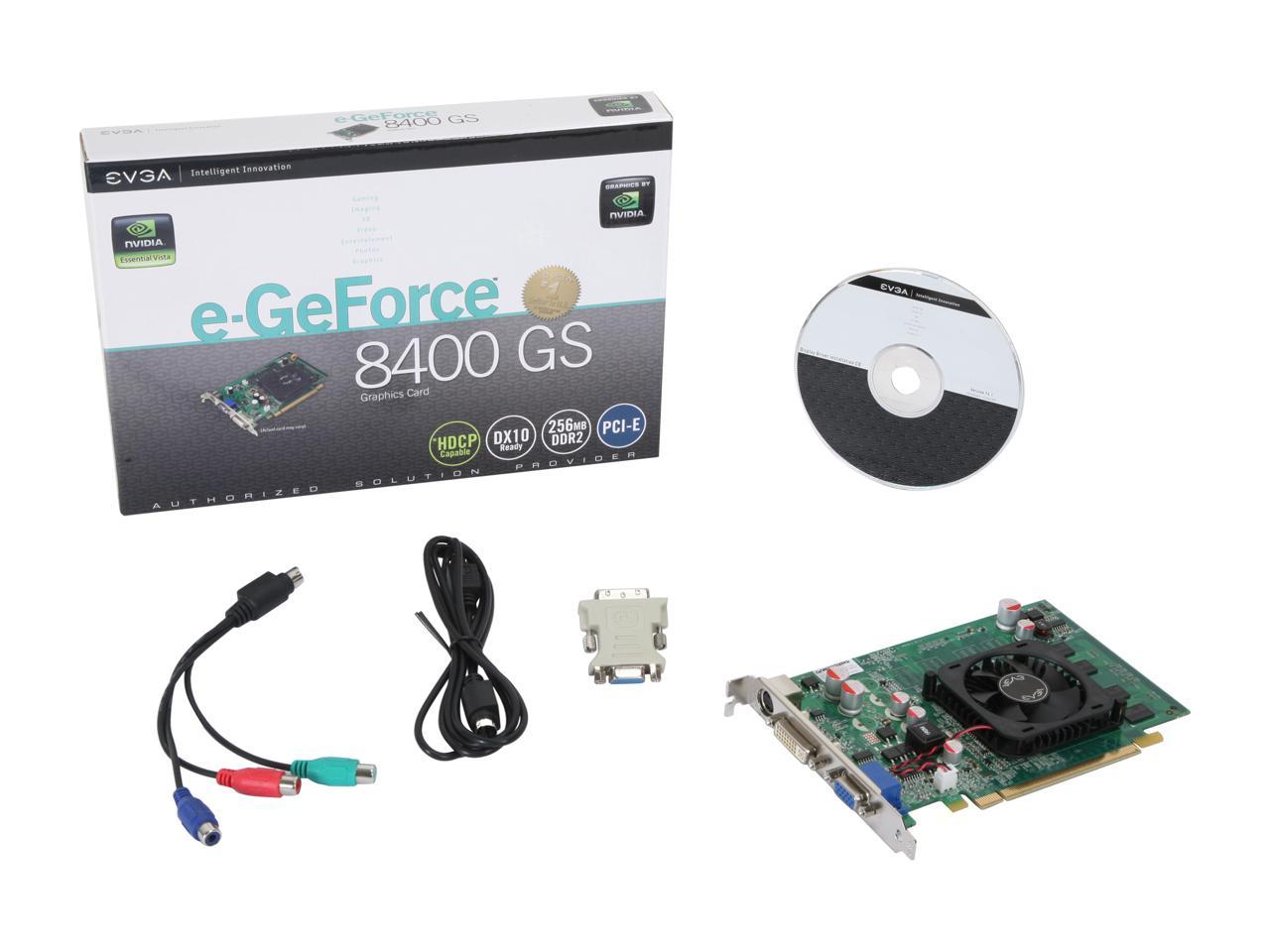 (39) Write a Review
OUT OF STOCK.
Overview
Specs
Reviews
The GeForce 8 series offers a complete family of graphic cards ready to meet the unique needs of their users. The series features a unified DirectX 10 Shader Model 4.0 & Open GL 2.0 architecture for stunning 3-dimensional graphics and lifelike texture rendering. With 10-bit per channel output, the 8 series produces higher fidelity color and separation. The cards support SLI for multi-card rendering and NVIDIA's PureVideo HD.
The 8400GS is designed for those who need more graphics processing than their CPU can handle. It processes video data with 16 stream processors fed by 256MB of 64-bit double-pumping GDDR2 SDRAM running at 533MHz to deliver 1920 x 1200 resolution. The core clock runs at 459Mhz and the 400MHz lets you use two monitors for increased workflow, or wide-screen gaming.
Video can be streamed via S-Video or HDTV outputs. An onboard fan aids board cooling and case airflow so you're ready to go right out of the box. Choose the NVIDIA GeForce 8400GS card for stellar graphics and versatile video output at a price that won't break the bank.

Pros: Great card, works very well with Ubuntu linux. If you want to do multi-head with linux this is the card. Even plays my games in linux with wine with a good frame rate

Pros: Excellent card. I upgraded from a Radeon 9800, and the performance increase was substantial. Not for UBERHEAVY gaming, but light to mid gamers should find this an acceptable cost alternative to buying an 8600 or higher.

Cons: The backplate was broken slightly when it arrived - so that it was hard to screw the card in, but if you have a screw in the slot below it, it works just fine.

Overall Review: I'd've liked to go with something higher, but it does what it needs to at a great price.

Cons: Cooling fan is small and high-speed and therefore very loud. Not very high-pitched but loud enough to be heard from inside the case under the desk in an office, over the sound of my typing.

Overall Review: Unplugged the fan and it seems to be okay, installed in a Dell BTX tower so the main system fan may be providing enough airflow. Realistically all 8400GS cards ought to come with passive cooling. Even without increasing the size of this heatsink, just making it a full heatsink instead of cutting out space for the fan, would have been plenty.

Cons: Will not play any games even though I didnt buy it for games I cant seem to get it to work with any games I own even on low.

Overall Review: If your looking for a cheap card to playback HD content this is cheap simple solution that works well. The cards cheap fan is quite and the card doesnt run hot. The card also reads as a 512 card so it does have 256MB onboard and the 512 shared.

Pros: This card works great with Vista media center. My primary goal was to watch HD content at 1080p and it achieves this goal superbly.

Overall Review: Wish this had a passive cooler for noise, but it's very quiet anyway.

Pros: Nice card for the Price. Performed as expected. I got this for next to nothing with a mail in rebate.

Cons: Runs hot and the fan can get pretty loud if case cooling is an issue.

Overall Review: I bought this card so I would have a spare to be used while my main card was being sent in for a step-up. I didn't really play any high end games during that time, so I cannot comment on it's gaming performance.

Cons: Dead on Arrival. plugged it in, fired up the box and got no post.

Pros: Great video for a workstation. Displays TV onboard like its a Sony Trinitron. Maybe not for gamers but is fine for a computer to do work.