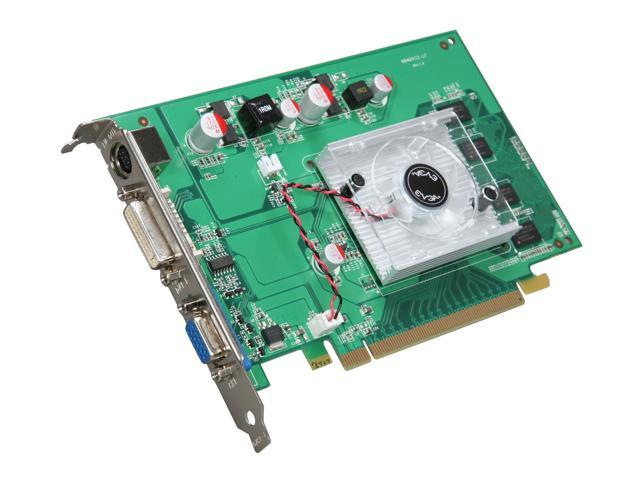 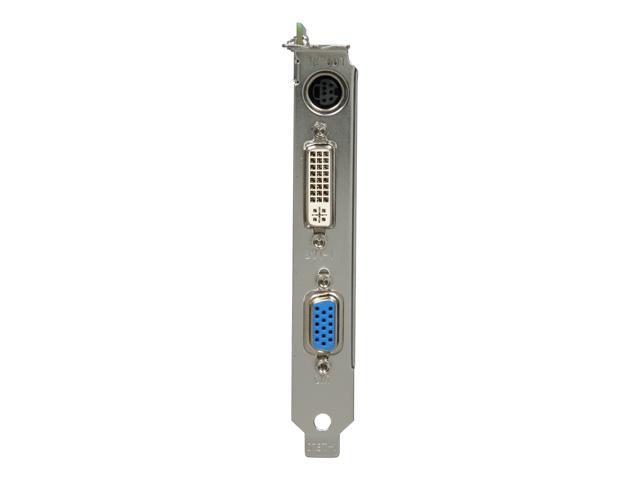 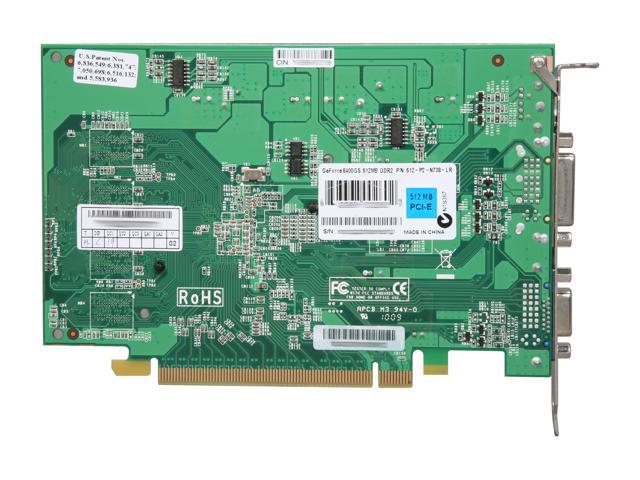 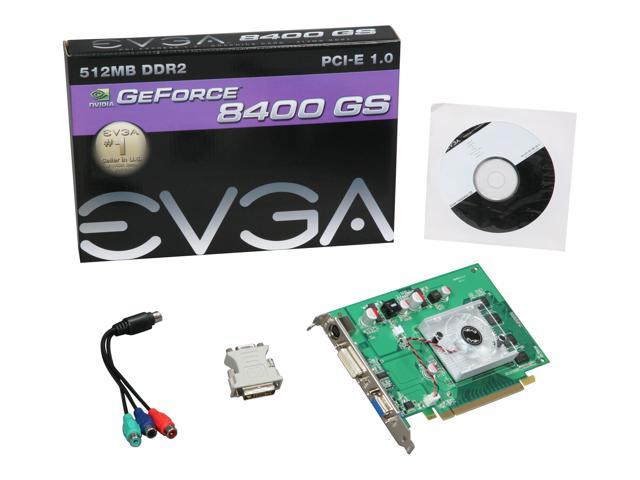 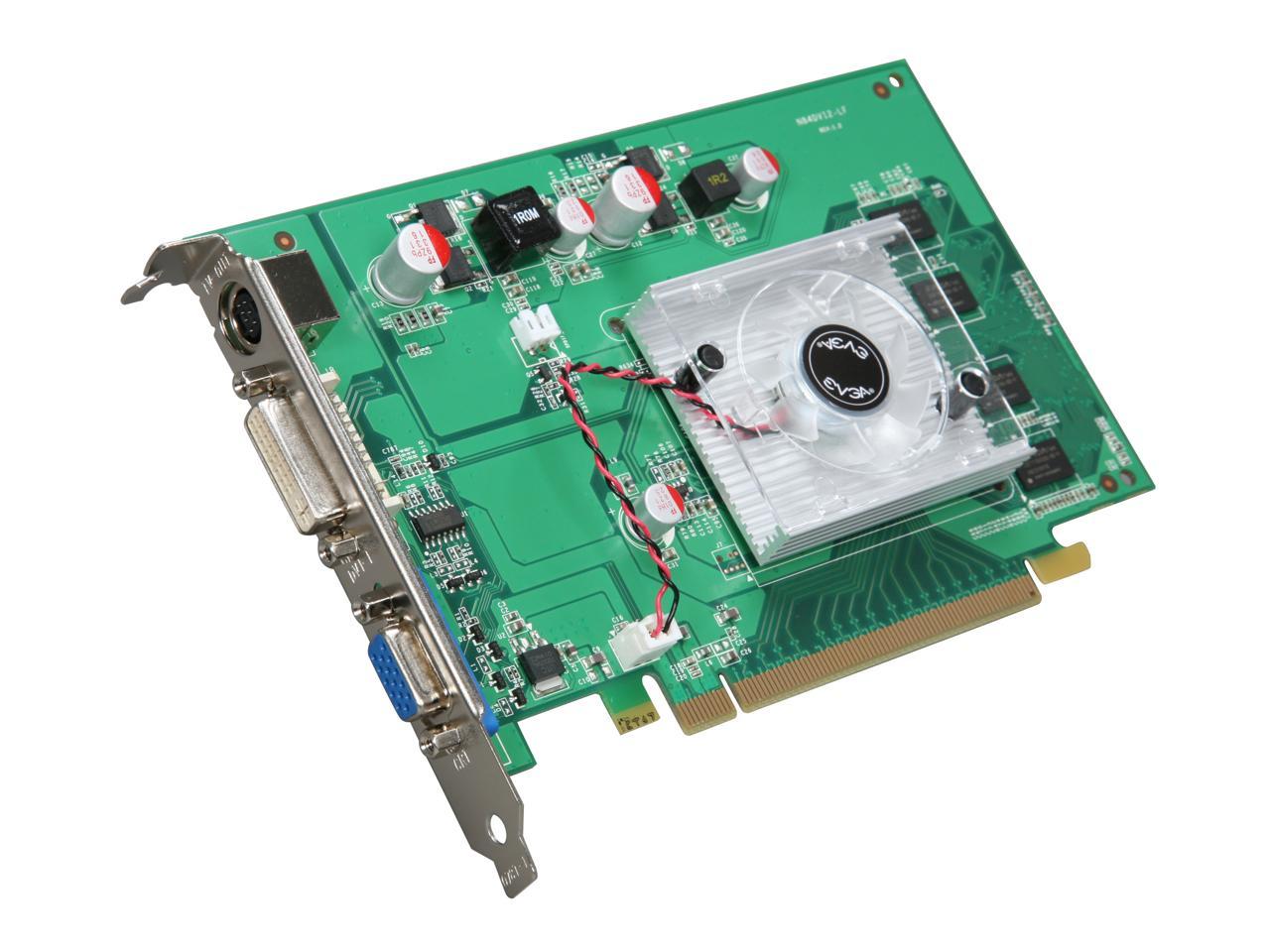 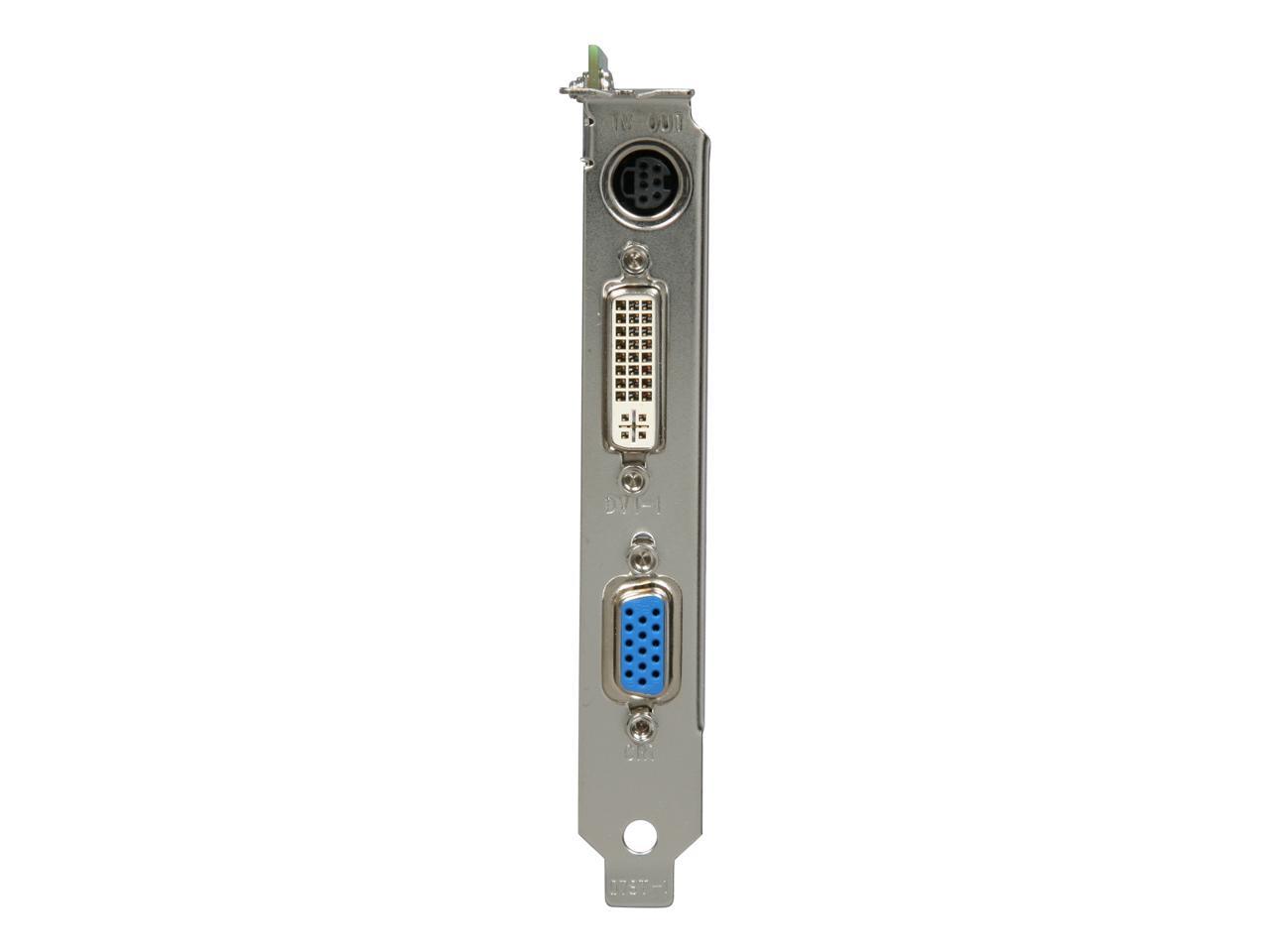 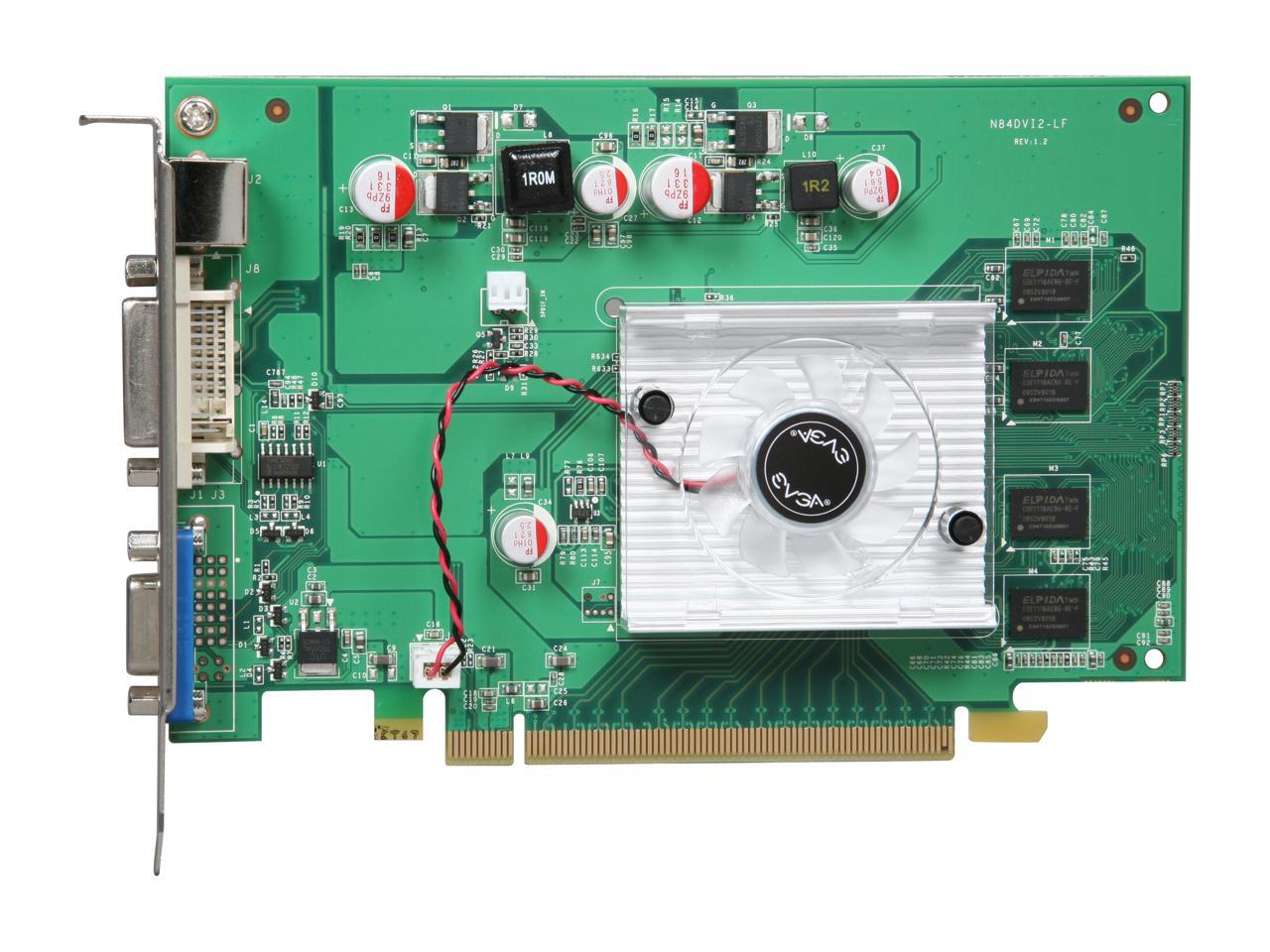 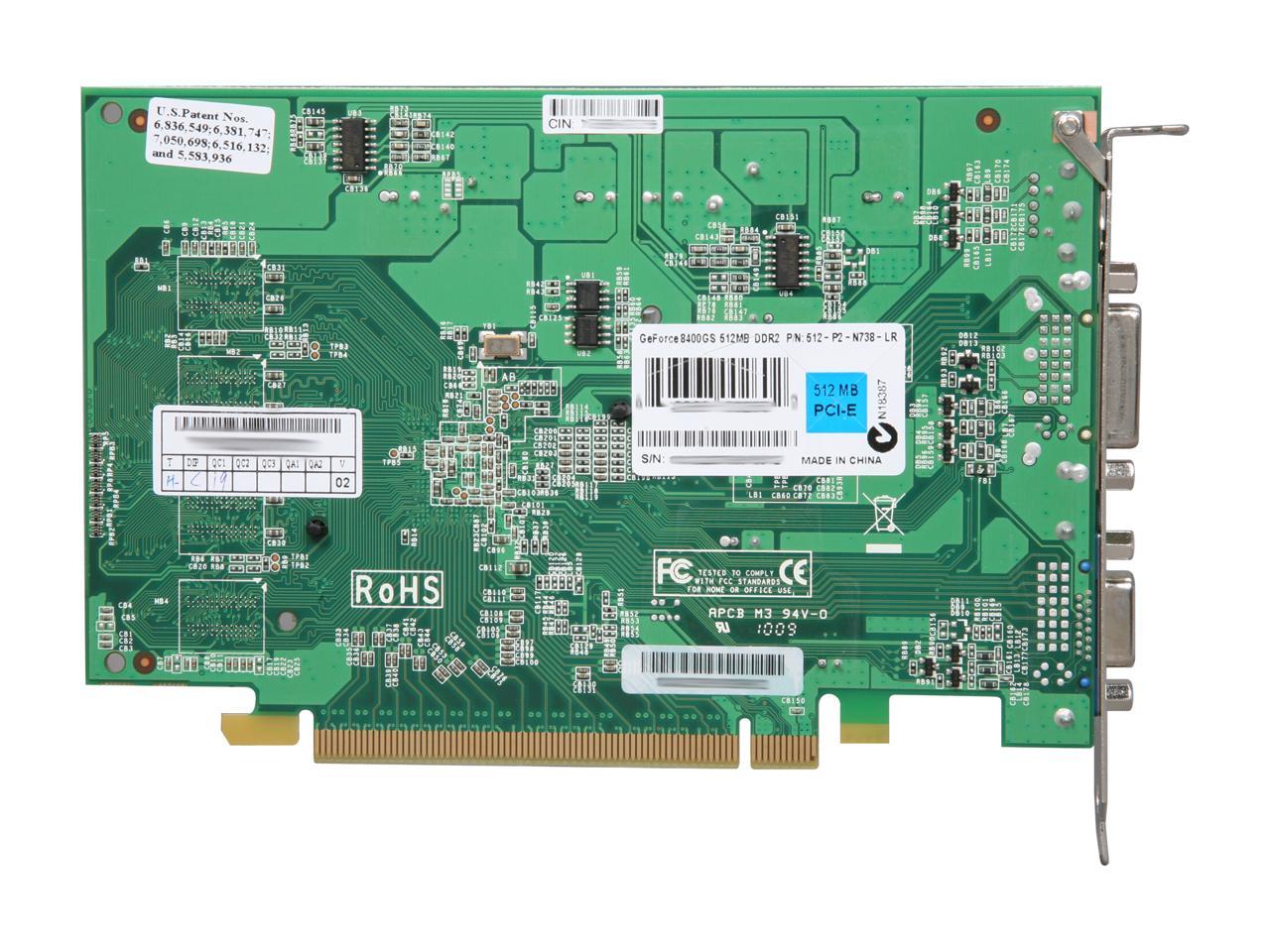 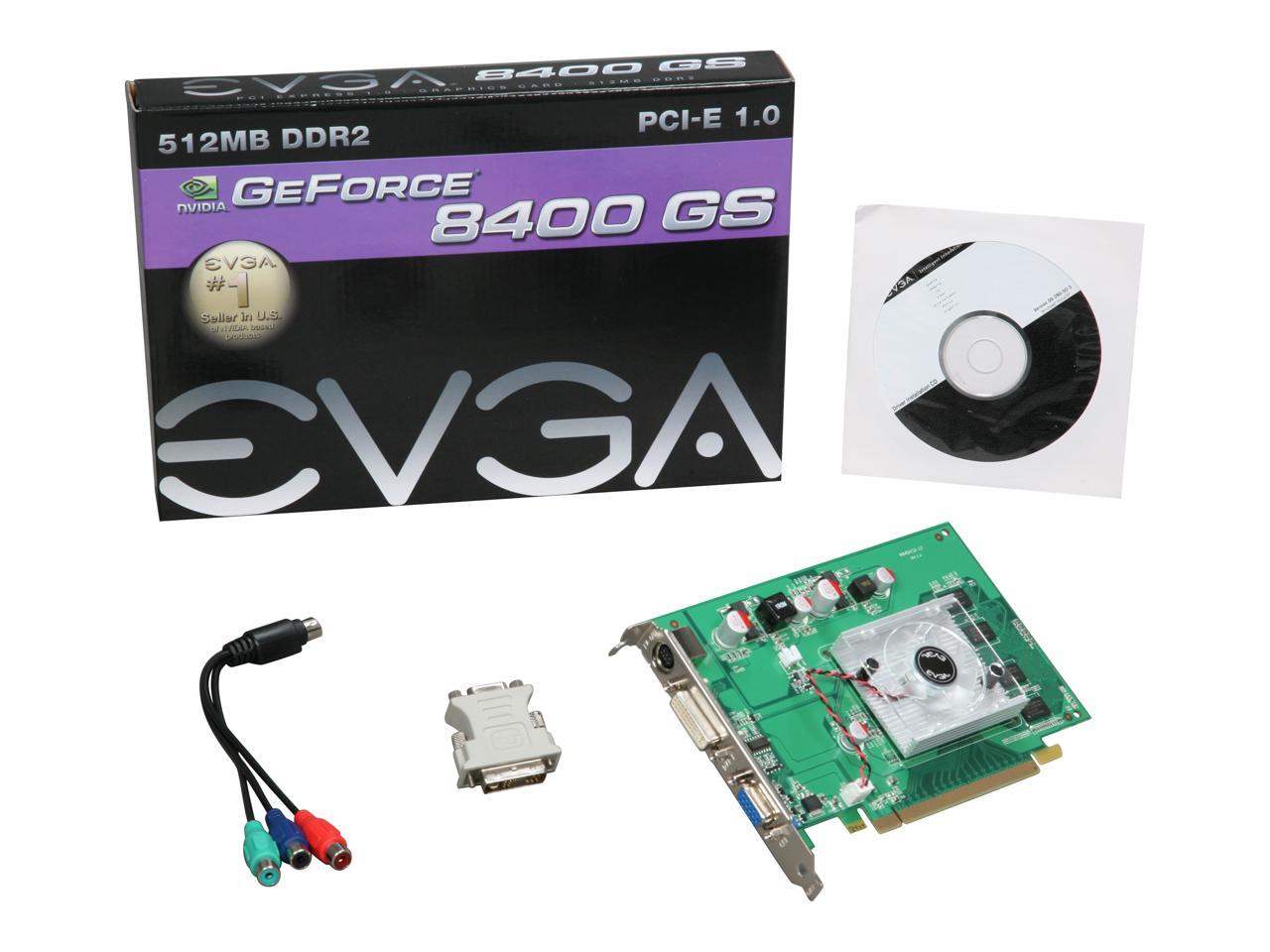 (129) Write a Review
See more "pci express x16"
OUT OF STOCK.
Overview
Specs
Reviews
The GeForce 8 series offers a complete family of graphic cards ready to meet the unique needs of their users. The series features a unified DirectX 10 Shader Model 4.0 & Open GL 2.0 architecture for stunning 3-dimensional graphics and lifelike texture rendering. With 10-bit per channel output, the 8 series produces higher fidelity color and separation. The cards support SLI for multi-card rendering and NVIDIA's PureVideo HD.
The 8400GS is designed for those who need more graphics processing than their CPU can handle. It processes video data with 16 stream processors fed by 512MB of 64-bit double-pumping GDDR2 SDRAM running at 532MHz to deliver 1920 x 1200 resolution. The core clock runs at 459Mhz and the 400MHz RAMDAC lets you use two monitors for increased workflow or wide-screen gaming.
Video can be streamed via S-Video, Composite or HDTV outputs. An onboard fan aids both board cooling and case airflow so you're ready to go right out of the box. Choose the NVIDIA GeForce 8400GS card for stellar graphics and versatile video output at a price that won't break the bank.

Pros: This was a great upgrade for my pretty strong computer, which came with a controller and not a full on card. I went from having terribly low FPS on the lowest settings of TFT2 to having it at max settings and running very smooth and crisp. The price is a great find as well, can't beat this deal. Installation of the card itself was painless and installing the drivers was fast. I'm using Vista, and I can tell the interface is a bit sharper in addition.

Overall Review: I can see this being either a good big or small upgrade from whatever your computer's graphics capabilities/ports can give.

Pros: Great card for the money, runs Quiet. Will play many games that are not too demanding (Half Life 2, BF1942 etc.) No problems whatsoever.

Overall Review: If you are going to play a newer game like Halo 2 for pc, you will want a better card. the 256mb ddr3 geforce 8600gts is a better choice, if you can pay a few more bucks.

Pros: No need for direct power from the power supply. That made it incredibly simple to replace the failed graphics card on my 3-year-old Dell Dimension. It was so easy and so affordable, I bought a second one (plus some memory) to upgrade an Acer that had been purchased solely for office apps and surfing. The teenagers are now giving both older machines rave reviews for playing COD.

Overall Review: I very much appreciate the Newegg "learning center" links. I know more about computers than the average joe, but it's not my job and technology changes fast. I had figured out that my graphics card was failing, but had little confidence in replacing it on my own. The learning center link was a great guide. I then put in the info on my machines, and received a list of compatible parts. I made a choice based on reviews and the learning center. Voila! My teenage boys now think I'm a genius. They can now include the old desktops in their gaming LAN so they can have even more friends over.

Pros: You can see an image on the monitor.

Cons: Card had serious warp - almost couldn't get it to fit into the PCI-e slot. Worst fan I've ever experienced. Not only was it loud, it also vibrated throughout my Antec case. Probably three to four times louder than the two case fans and PS fan, combined.

Overall Review: My older eVGA card was great. It was super quiet and performed well, until it blew out two capacitors. The 8400 GS is horrendous - I RMA'd it after one day of torture.

Pros: After a decent OC, it was able to play Crysis decently well. Runs cool, quiet, and can be pushed pretty hard. Great for average gaming, and CAD/CS3 work.

Cons: Shader and mem clocks are linked, artifact at ~ 800 on the shader. Just not enough balls for some gaming, don't buy it if you are into gaming.

Pros: I simply Got what I paid for, Low budget card = Low Graphics capabilities. ran great and did its job the second I plugged it in. Required Power supply said Higher than 250 but I'm Running it on 150PSU.

Cons: The inside packaging, was a little nerve wrecking of how it was kind of just in there with one layer of bubble wrap, when I got it, but it did work fine. Installation CD on card was out of date...as usual something you'd expect but It was an easy fix...if I was on Cable internet, 100mb file, running on a cricket modem, 5kbs a second.

Overall Review: Running on AMD 4450e 2.30ghz CPU 32bit Vista 150 PSU unit and 2 gigs of ram Ran Starcraft 2 on low got 30 FRAMES lowest it went was 10FPS because of allot of units on screen Ran starcraft 2 on medium, got 20 frames but easily got Laggy when there was a moderate amount. (4on4 maps) If I played it on a 2on2 Map on medium I might've gotten Better Frame rate. Played Company of heroes on Low all the way resolution at 1280-800 No LAGG Ever even when there was alot of explosions and smokes everywhere. Then again maybe the 150 power supply might effect the maximum output of the video card. Not sure, Not That much of a tech wiz so yea...so far 150 PSU runs great.

Pros: Ordered and received within two days. Popped it in and started right up... no issues whatsoever. I bought the card for Sims 3, but I also do online classes and have to use programs that require high amounts of video and memory. One program I use is Maya. I have two gb of ram and this video card and it runs pretty smoothly considering I'm below the operating suggestions of the program. Definite recommendation.

Cons: None since installing the card in August of 2010.

Pros: Works well with Win7. Is definately worth what I paid for it.

Overall Review: My son and I built a Win7 last year and got one of these second hand. When it died, I figured the last one worked so well, even used, let's just get another one. So far, I am satisfied.