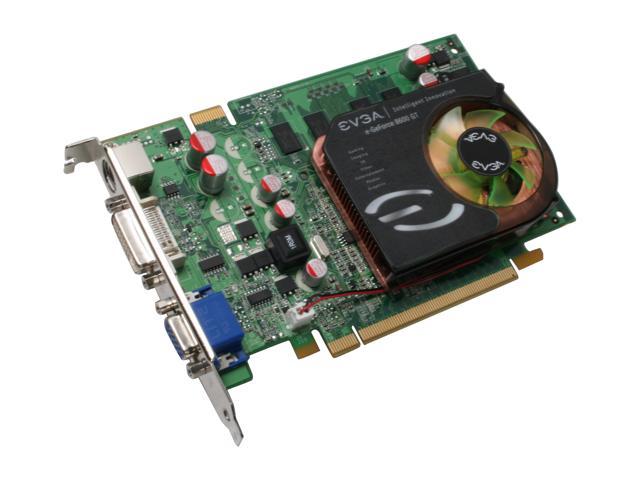 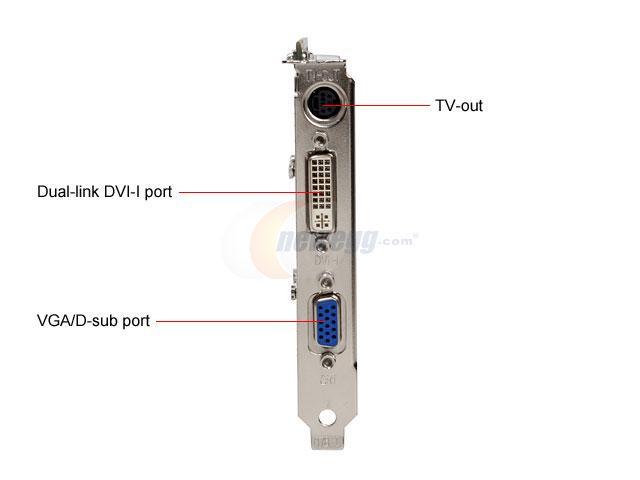 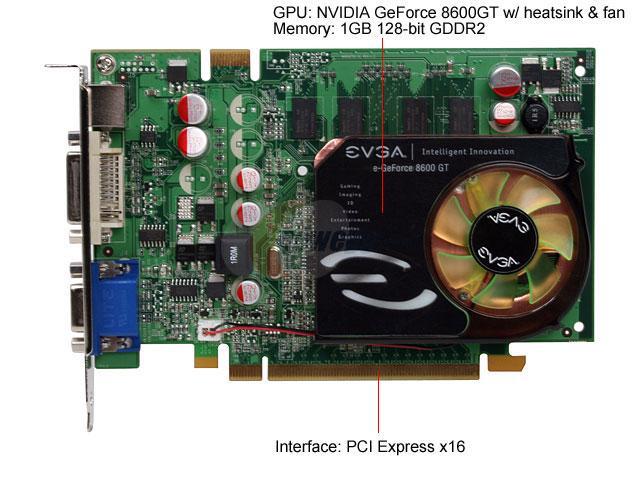 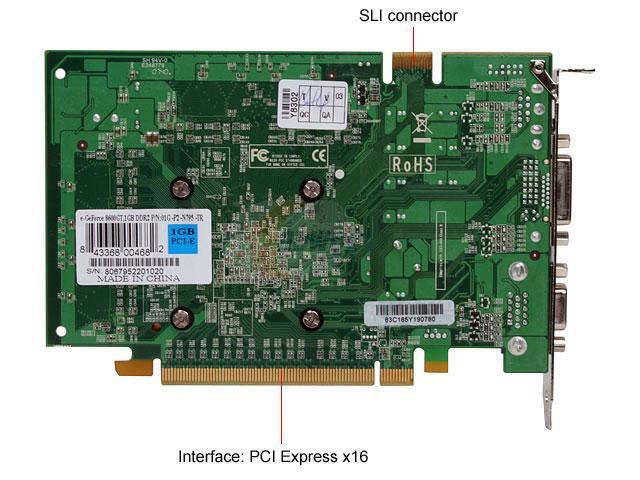 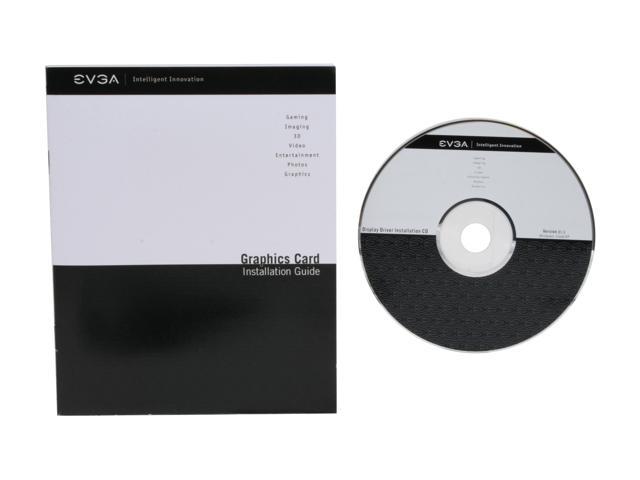 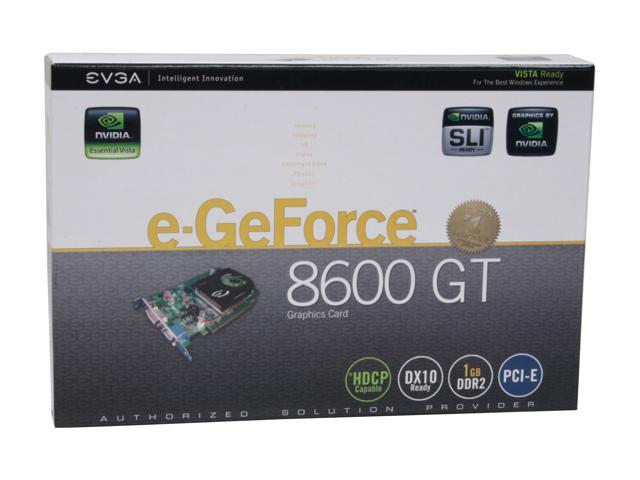 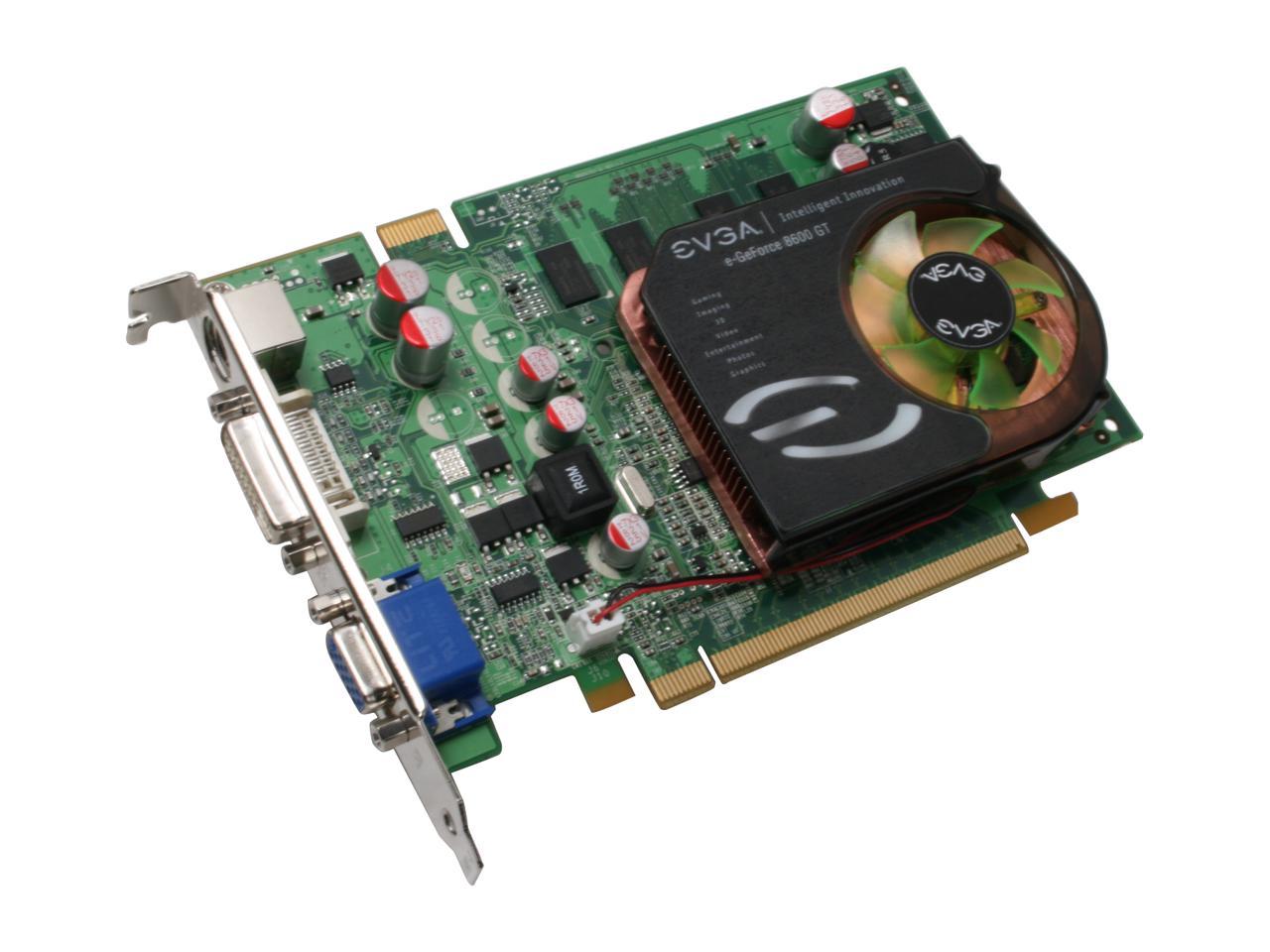 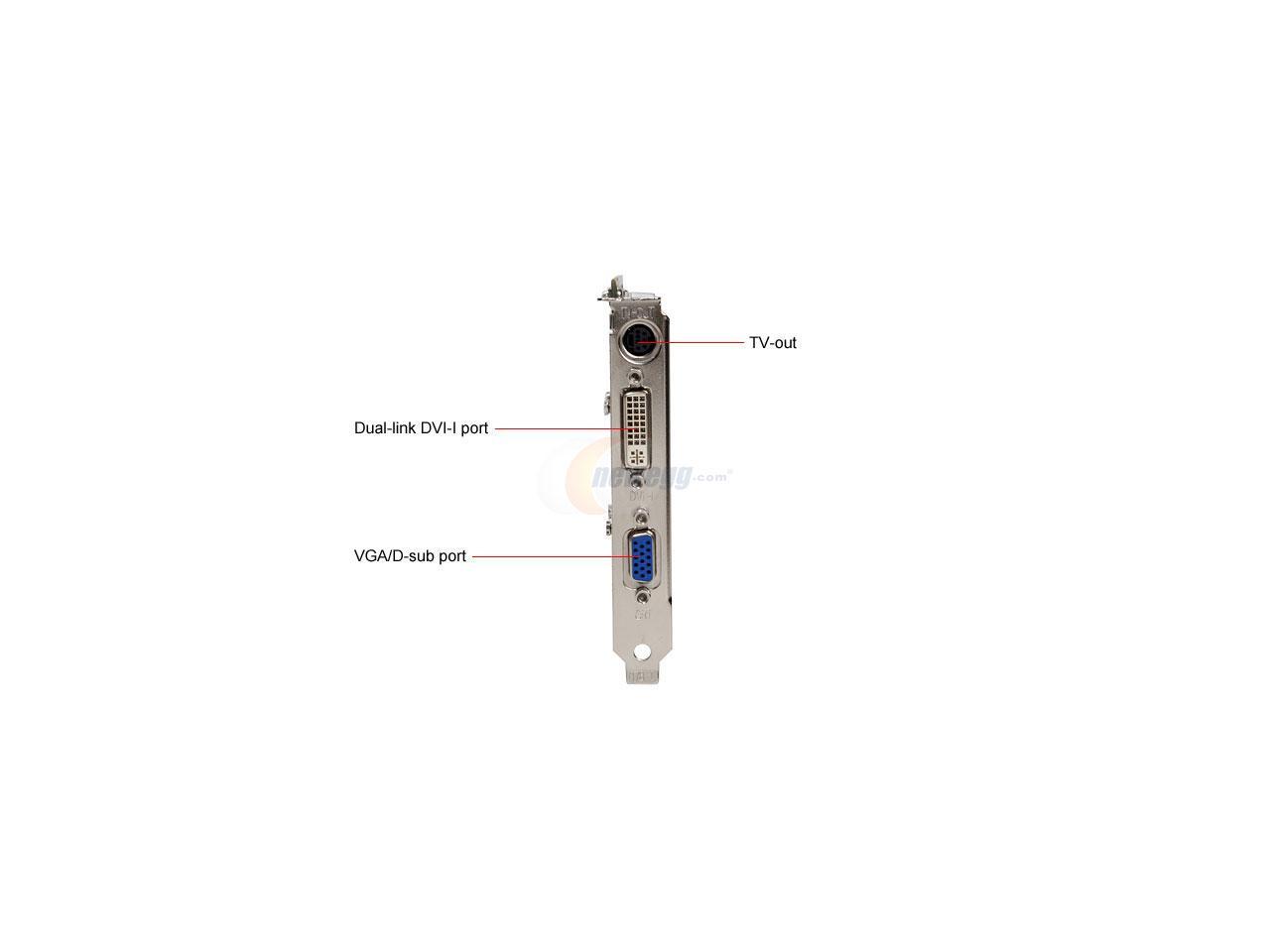 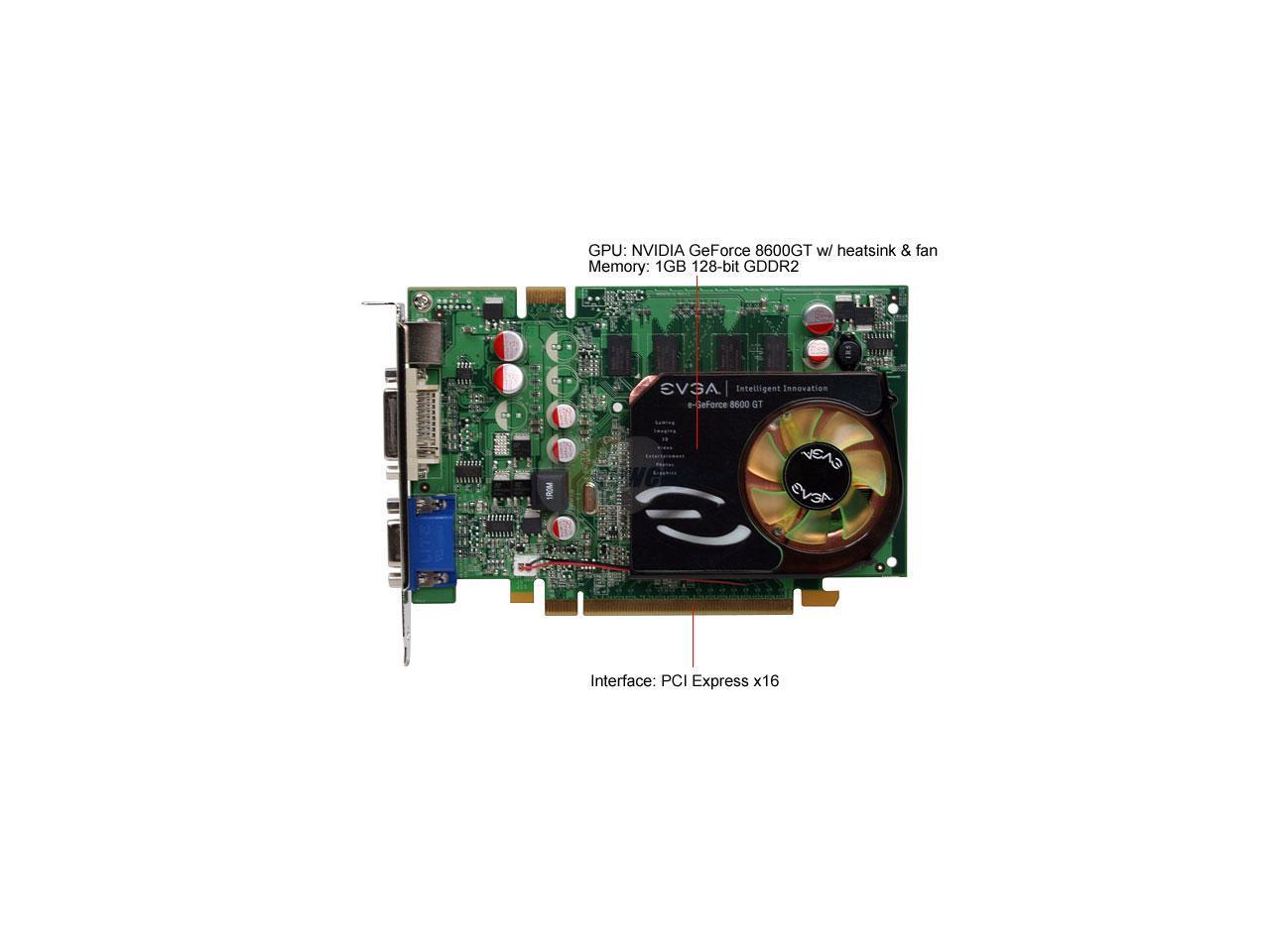 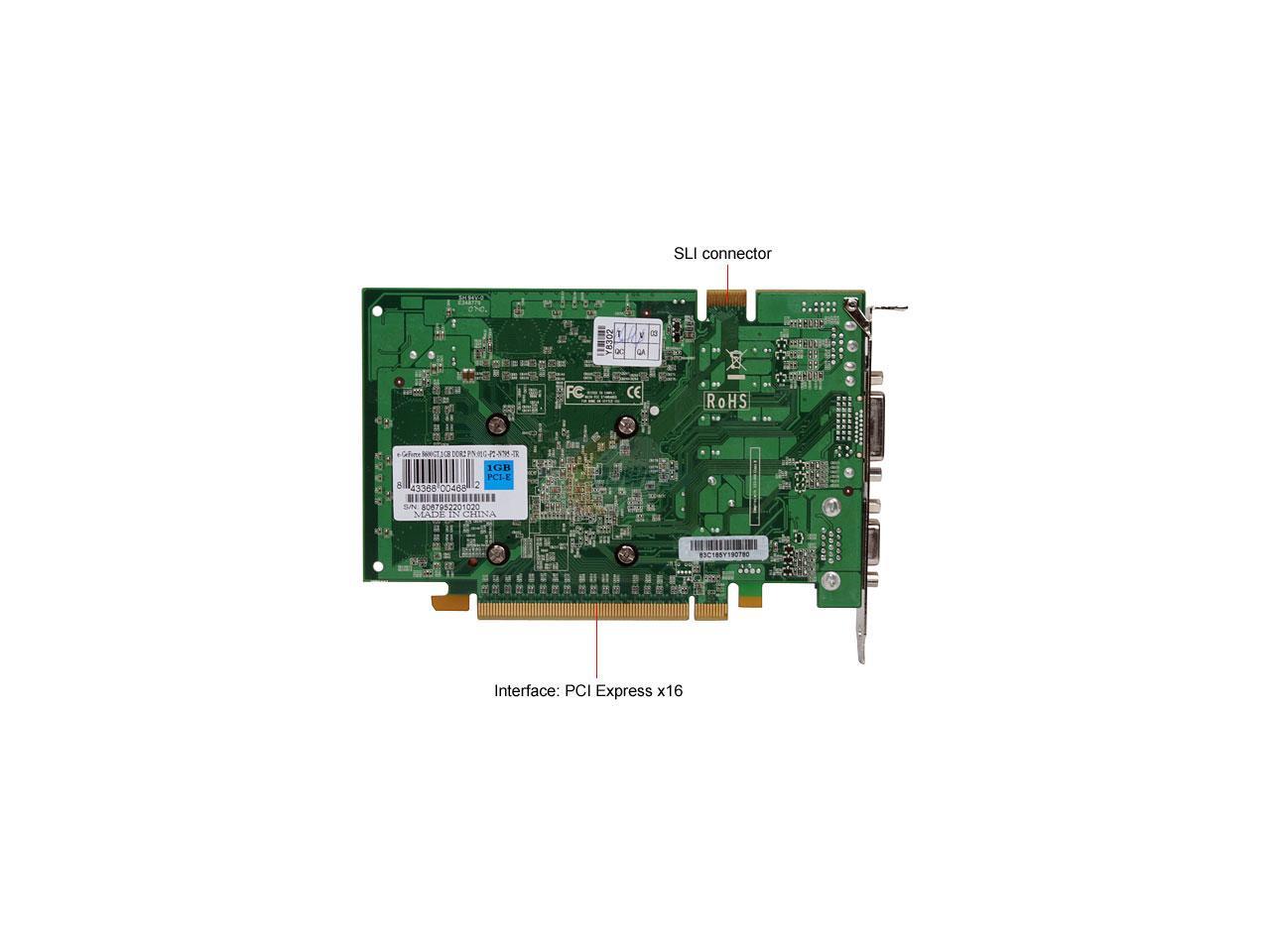 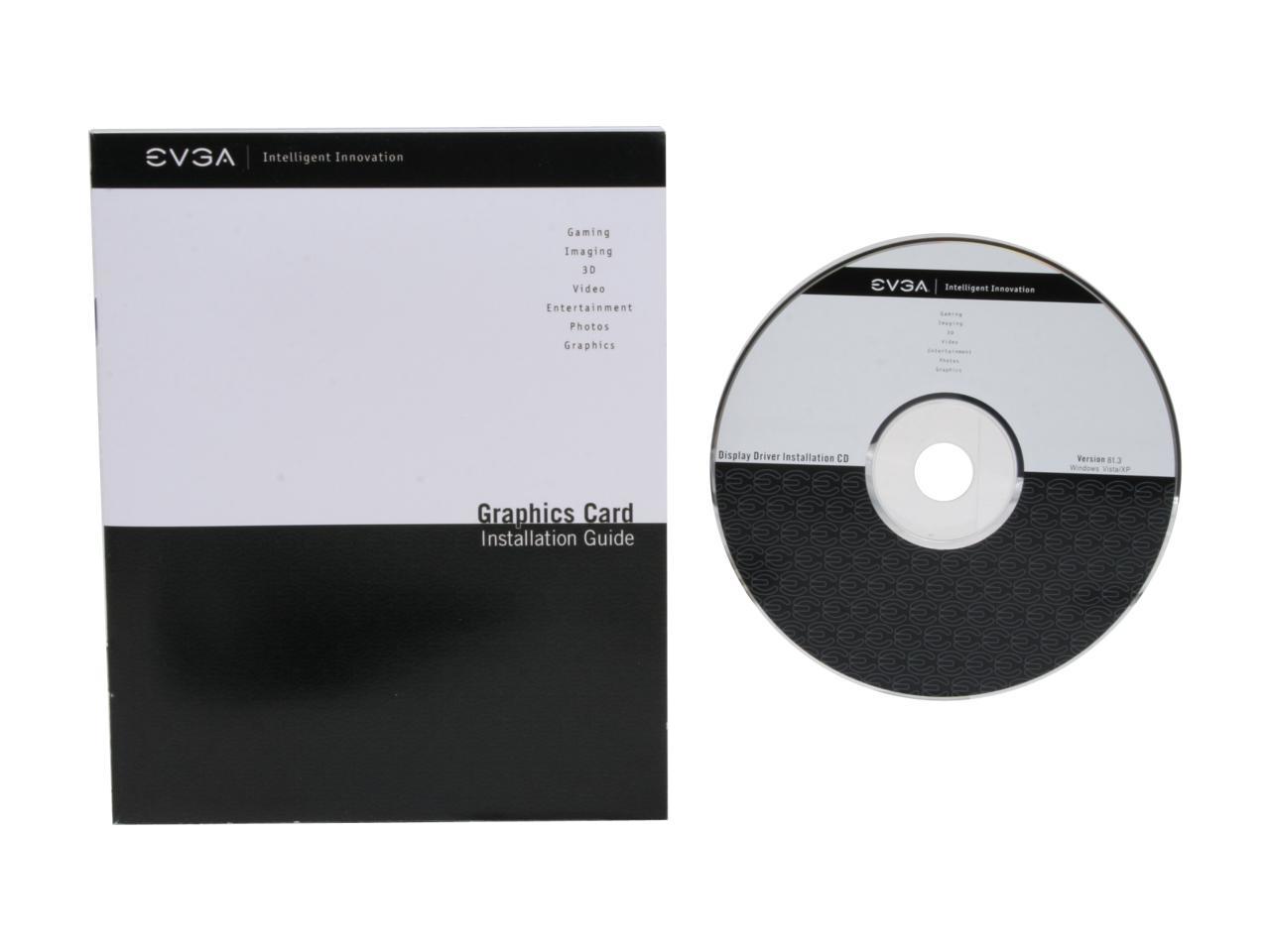 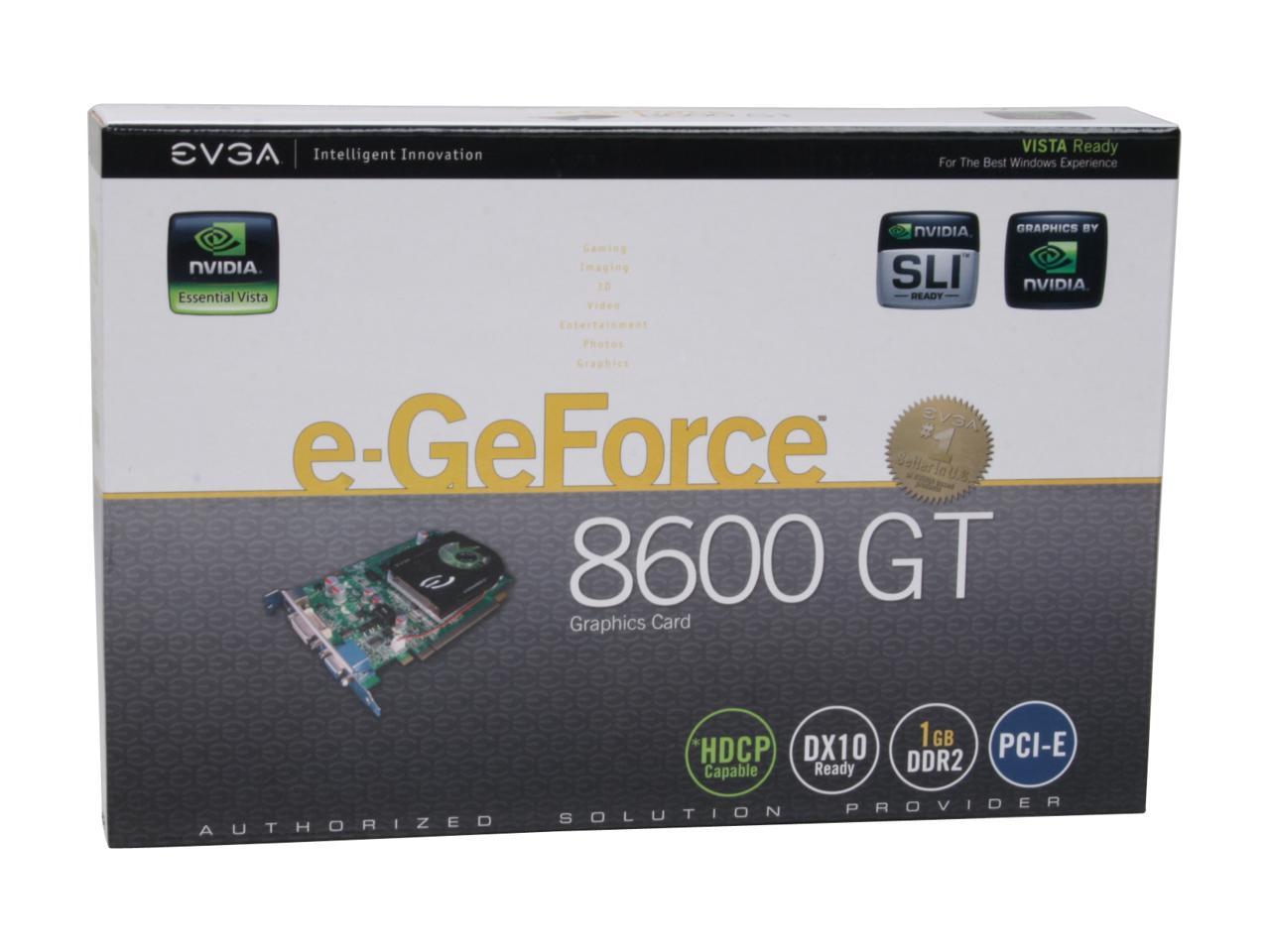 (26) Write a Review
In stock.
Ships from United States.
Most customers receive within 4-9 days.
Overview
Specs
Reviews
The GeForce 8 series offers a complete family of graphic cards ready to meet the unique needs of their users. The series features a unified DirectX 10 Shader Model 4.0 & Open GL 2.0 architecture to produce stunning 3-dimensional graphics and lifelike texture rendering. With 10-bit per channel output, the 8 series produces higher fidelity color and separation. The cards support SLI for multi-card rendering and NVIDIA's PureVideo HD.
The 8600GT offers faster video processing at an affordable price with higher resolution rendering. It processes video data with 32 stream processors fed by 1GB of 128-bit double-pumping GDDR2 SDRAM running at 800MHz to deliver 2560 x 1600 resolution. The core clock runs at 575Mhz and the 400MHz RAMDAC to let you use a pair of monitors for increased workflow or wide-screen gaming. Both DVI are double-linked to handle the biggest monitors.
Stream video through S-Video or HDTV outputs. An onboard fan aids board cooling and case airflow, so you're ready to go right out of the box. Choose the NVIDIA GeForce 8600GT card to bring best-in-class graphic performance and flexible video output at a middle-of-the-road price.

Cons: Getting you old PCIx card out can be tricky, push the tong aside on the motherboard connector.

Overall Review: Nice for card not to require the extra PCIx power connection.

Pros: One gig of memory really helps out with my map intensive games (draw distance). Crysis purrs like a kitten.

Overall Review: I've already had an eVGA 7600 for a year so reviewing this card only after a day of use is easy. It's a solid manufacturer and card. This card is for my mid-range gaming platform.

Pros: Runs Crysis fairly well. I play all my other games on max settings with no problems FEAR, NFS ProStreet, ect... Great Card for the price.

Overall Review: Would buy it again.

Pros: Lots of Bang for the buck!!!! The most graphicly intence game I own is Mass Effect. On my 512mb Geforce 8400gs i had every setting as low as possible and it still hic upped, now i set the resolution one step higher and maxed out everything else... it runs hic up free!

Cons: Had to get a power supply as well :(

Pros: Awsome card for a really good price! This card is an excellent card for the price and graphics it can handle. I would recommend it to anyone looking for a good cheap card.

Cons: Only con I found was it was a little tricky getting the old PCI-E card out, just because I didn't know you had to pull the tumbtab away from the card then pull the card up. Other than that no cons except the fact that I couldn't get the 8800GT instead because of my price range and power limitations.

Overall Review: I found that it was nice to have the 1GB of RAM that came on the card. It does help other programs run. If you a gamer, I mean more gaming then average surfing the web and such, then I would recommend getting a NVIDIA PhysX card in the future it will take a load off your processor and also make game effect like explosions look really really cool!

Pros: plays back HD content (1080p) perfectly, has no problems with Blu Rays

Overall Review: great for the price

Pros: Great video card for the price. Im getting 250+ FPS in Counter Strike Source. Have not gotten any other games on it but for the price its great!

Pros: The Price was fairly good for the performance, plays simple games very well, Battlefield is not a problem 2 or 2142 for that matter, but not at hi-quality.

Cons: The 1gb memory is not really doing anything, no extra power connector. Not good with 3d rendering software, ok for small projects but anything sizable is not going to be quick.

Overall Review: I play alot of FPS games, Crysis, Battlefield 2142, and game play is ok with medium to low settings about 60 FPS, in Crysis. 3DS Max, is ok until you really pure on the textures and the lighting.