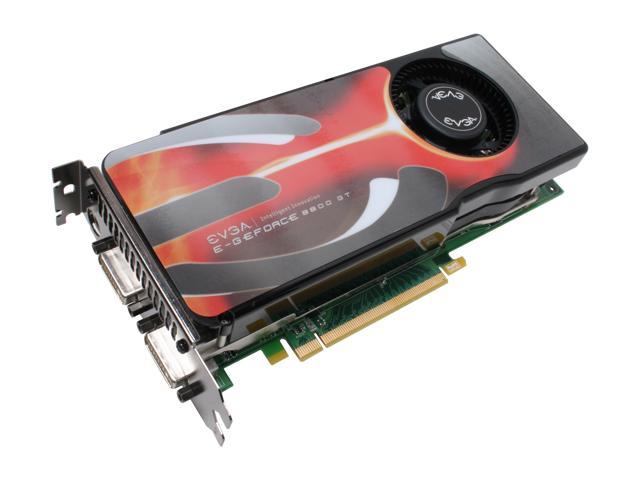 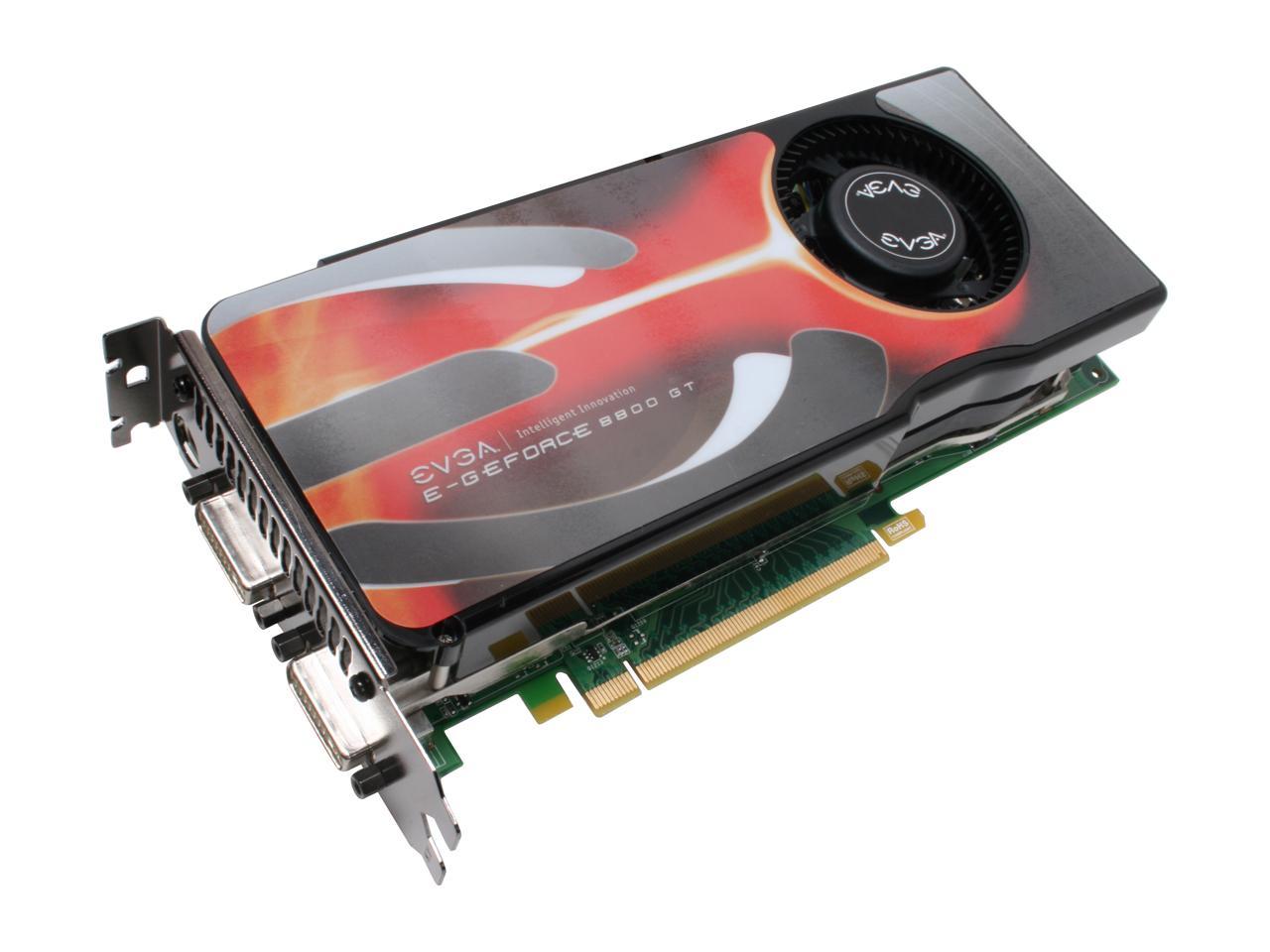 (65) Write a Review
OUT OF STOCK.
Overview
Specs
Reviews
The GeForce 8 series offers a complete family of graphic cards ready to meet the unique needs of their users. The series features a unified DirectX 10 Shader Model 4.0 & Open GL 2.0 architecture to produce stunning 3-dimensional graphics and textures. With 10-bit per channel output, the 8 series produces higher fidelity color and separation. The cards support SLI and NVIDIA's PureVideo HD.
The 8800GT gives solid response and delivers blistering video and graphic performance while remaining cool under fire thanks to the AKIMBO embedded improved cooling system. Its 754 million transistors can handle anything your games throw at it – and with reduced energy requirements. Accelerated processors offer faster video and other high-demand graphic effects.
112 stream processors are fed by 512MB of 256-bit GDDR3 SDRAM running at 1800MHz to deliver a full 2560 x 1600 resolution. The 600MHz core clock keeps everything moving and the 400MHz RAMDAC and twin dual-linked DVI let you output to multiple and large monitors. Video can also be streamed via the HDTV or S-Video outputs for greater flexibility. The 8800GT hits the mark for price while delivering high-end graphic performance.

Pros: I already had a Base EVGA 8800gt with the Akimbo Cooler Add on. It was cool, pretty quiet and rock steady. Now, with this one in and both OC's 120mhz over stock, they fly too. Great cards from a great company. NewEgg and EVGA. the way to go.

Cons: Akimbo cooler is big. Some people have issues with the back plate hitting cards installed in the slot above the cards.

Overall Review: Added 1078pts to my 3dmark06 with adding this card. I ordered this card early Wednesday Morning with standard freight, and it delivered before noon Yesterday. Talk about a very pleasant surprise. NewEgg and EVGA have my business for a long time to come...

Pros: I have had this card since 2008. It is now 2013. It has lasted through two CPUs, two motherboards, two sets of RAM, three PSUs and probably 10 installs of Vista and then 7. I even bought a card to replace it two years ago (A 650 something, I think) that died from underpowering (my bad!). I didn't have the cash to upgrade again, so it went back in. I have played every game I've bought with this card. The only ones it's had trouble with were Crysis and Crysis Warhead, which I had to run windowed at 1024X768. EVERY other game I have ever played has been stellar. I might not be playing it on the highest settings, but I don't care as long as I can play it, and I never turn the settings below medium. That includes games like Far Cry 3, Bioshock Infinite, Supreme Commander 2- all at 1080p (and in SC2s case, on two screens). I regularly play a game on one screen and netflix on the other with no lag or stutter. It is quiet enough, quieter than my case fans. EVGA makes a great product. I actually will keep this card for a long time just for sentimental value long after it is replaced.

Cons: None. I mean, it's a lower level card from more than 5 years ago and it still plays all the games I play at maximum resolution with NO problems ever.

Overall Review: This may be a useless review, but I don't even care- this has been the longest lasting part of this current computer other than the case.

Pros: Dual slot cooling blows air out of the case. I'm sure the card performs up to spec but I was unable to verify due to card being DOA.

Cons: Fan is loud at high speeds. Card was DOA.

Overall Review: After installing this card, the boot screens and Windows loading screens displayed severe artifacting. Opening the card in the device manager gave the good old "error code 10". Sending the card back to EVGA is out of the question, they make the user cover shipping BOTH WAYS. I buy a product, it's defective, now I have to pay more money to get a new one. I would do a flat return but would end up losing more money through restocking fees and return shipping. I am trapped with this broken card. My only viable option is to pay more money and ship it back to Newegg and HOPE the new card will work. This is unacceptable. The $104 card i purchased is now up to $115 through no fault of my own, I guess we will see how far this rabbit hole goes.

Pros: G92 architecture, DirectX 10 (still pretty slim software pickings), incredible upgrade from my EVGA 7600 GT 256 mb bought in 12/2006 (from NewEgg, of course). 512 mb, Akimbo cooler/dual slot from what I've read and see on my own really keeps the temps down. Nice to finally go into game options and check all the high settings. Rendering in Age of Empires III (a DirectX 9 game) looks awesome. Great, great price! Pays to wait 6 mos or so before jumping on the latest and greatest.

Cons: Man this thing is huge! Not so much a con but had some difficulty getting the backplate all the way down in the case. Seems a bit longer than the plate in the 7600 GT I had. Had to slip about 1/8" down between the back of the case the mobo, was tough to do that and slide into the mobo slot without really being able to see the bottom of the card and not shear off some capacitors.

Overall Review: Without alot of fiddling running at about 59 C at idle and mid 60's under load playing some Age of Empires III last night. I've got nTune installed and will play around with profiles and fan speeds to see if can get it down a bit.

Pros: Great Performance in all games.

Overall Review: Previously, I reported that my temps were around the 50c mark when idle and 60c or more under load. This is acceptable for this card but I found when I used Riva to increase fan speed to 90%, it idles at 40c and loads around 48c. Even lower at 100%. The card is not noisy at 90% or even 100%. Sounds like a standard case fan at those speeds. No need to overclock this card, performance is that good.

Pros: This was an upgrade from an nvidia 6800 GS so the differences are astounding. I didn't bother playing Crysis with the old card so now I'm enjoying that on all medium settings with no problems at all. Also, with the extra cooling you can overclock this card quite at bit and it'll still idle at about 40C.

Cons: Long and thick card. This might be a problem for some, but it fits perfectly in an Antec 900 case.

Overall Review: I chose this card because of the extra cooling. Combined with the ventilation of the Antec 900 case it stays very cool.

Pros: Bought this card without fully understanding what it was I was getting. This card is a little overclocked by EVGA and it is screaming fast. From opening the package to installation took about 2 minutes. Newegg and UPS delivery was also fast, but not as fast as this card.

Cons: No demos or demo games on the enclosed CR-ROM.

Overall Review: Be advised - this video card is very, very fast and will meet all of your current and probably most future needs. This card is probably too much (fast and powerful) for me at this time, but the price was right. Also, please note that this card is BIG! You will need at least 9 - 10 inches long and 2 slot widths to fit this card into your system. Great card, but you will need lots of room for it to fit.

Pros: I've been overclocking this card from the MSI Core Control software that came with MoBo. Running the Folding@Home GPU script I can stabily run this card about 15-20% faster RAM and GPU speed. Temp gets close to 140F when pushed. My Acer 22" LCD seams a lot sharper now than with my 6yr old ATI card.

Cons: Made mistake with build...flip flopped on the MoBo choice at the last minute and overlooked/confused the fact that MSI P45 Platinum supports Crossfire and not SLI. So my plan to upgrade to a second 8800GT later won't work...My fault!!