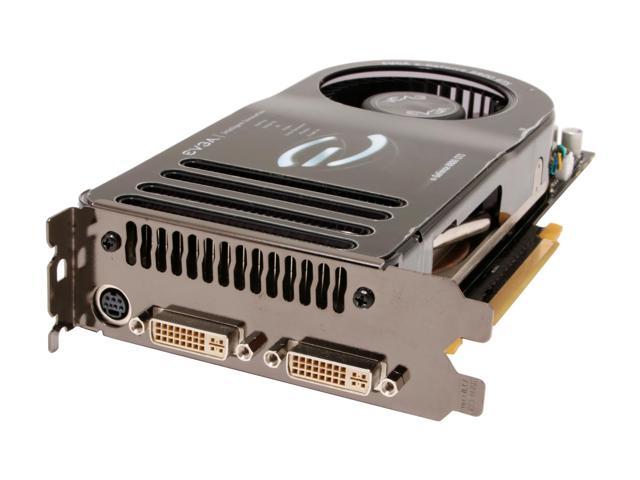 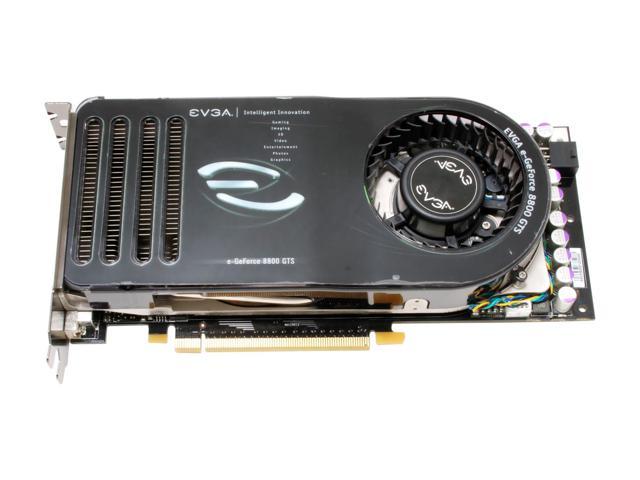 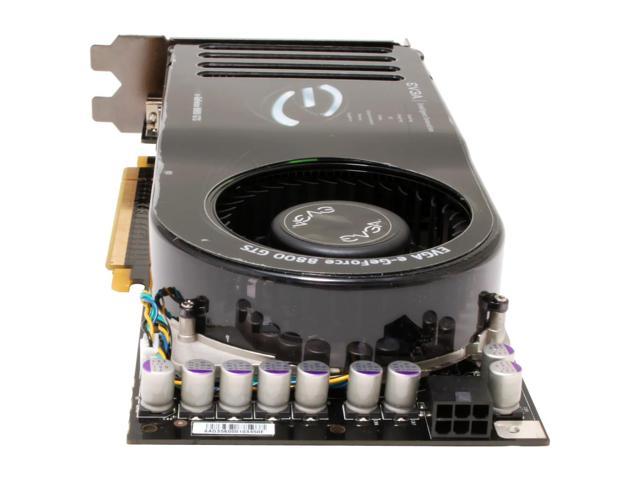 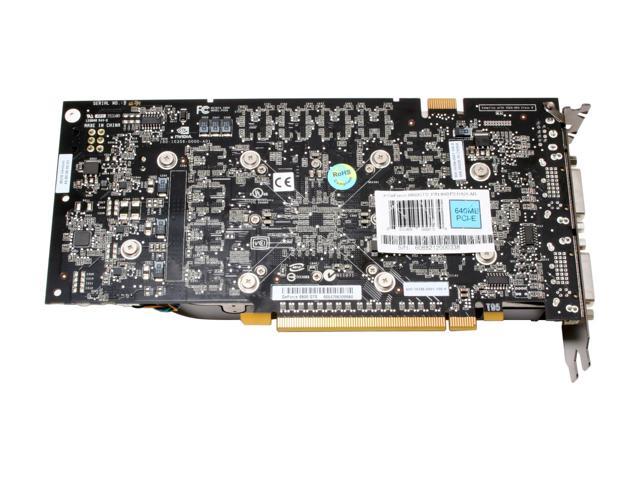 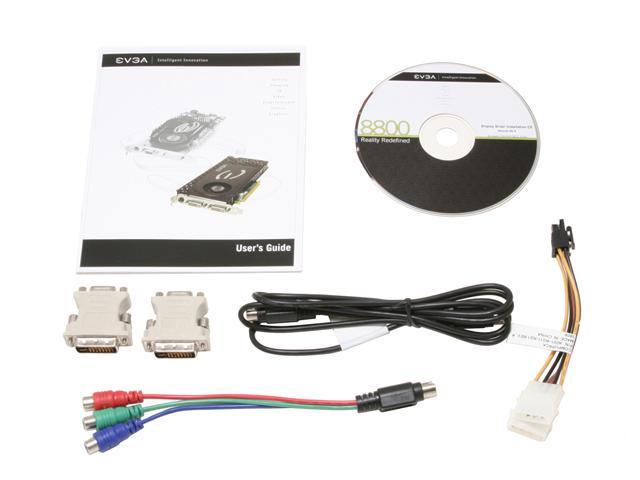 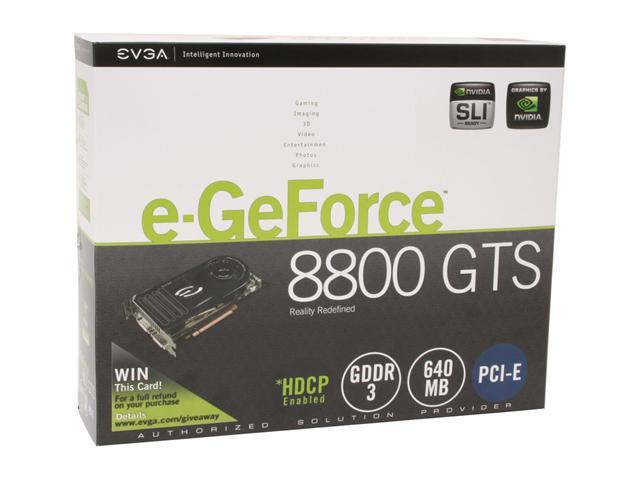 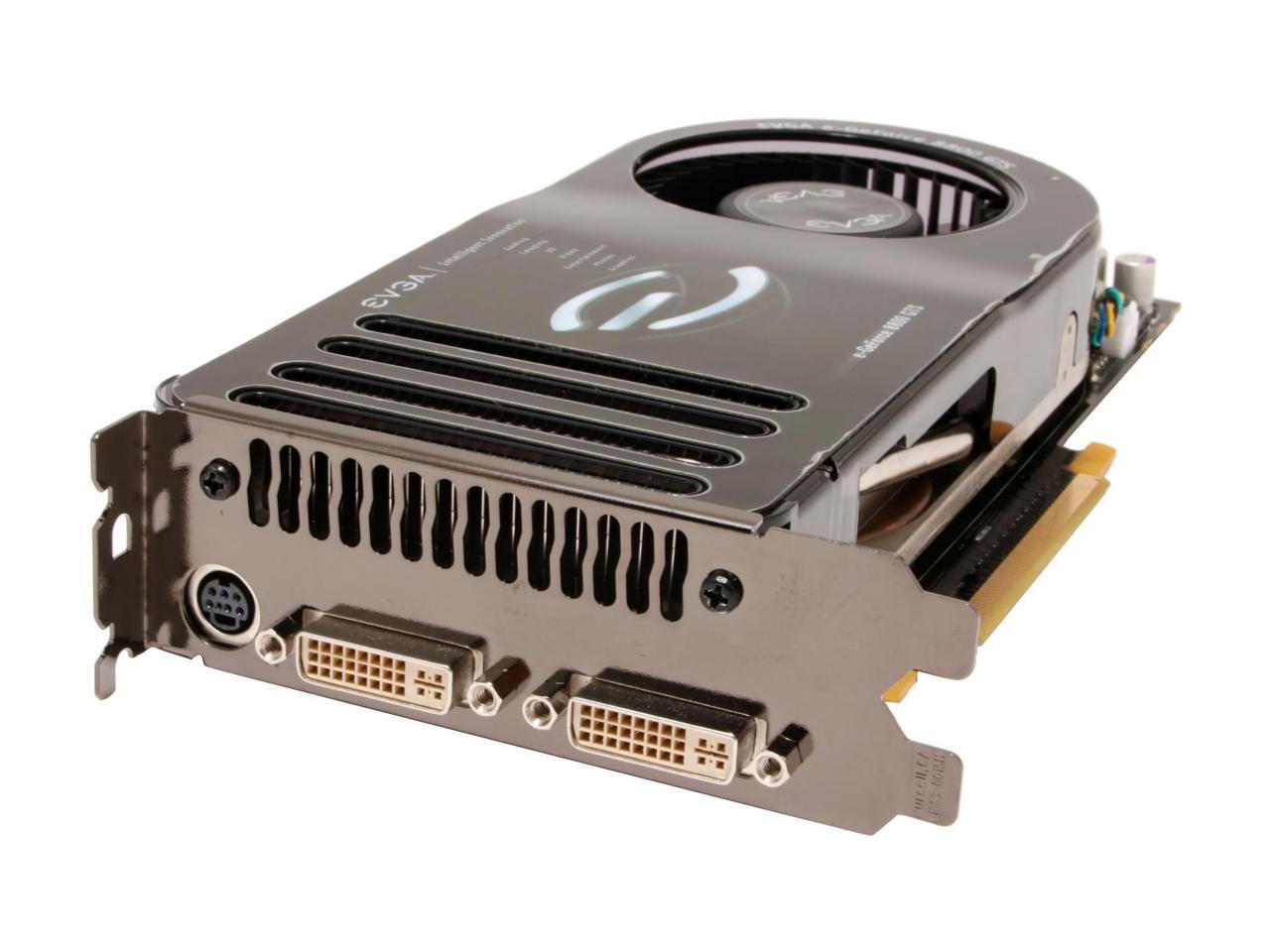 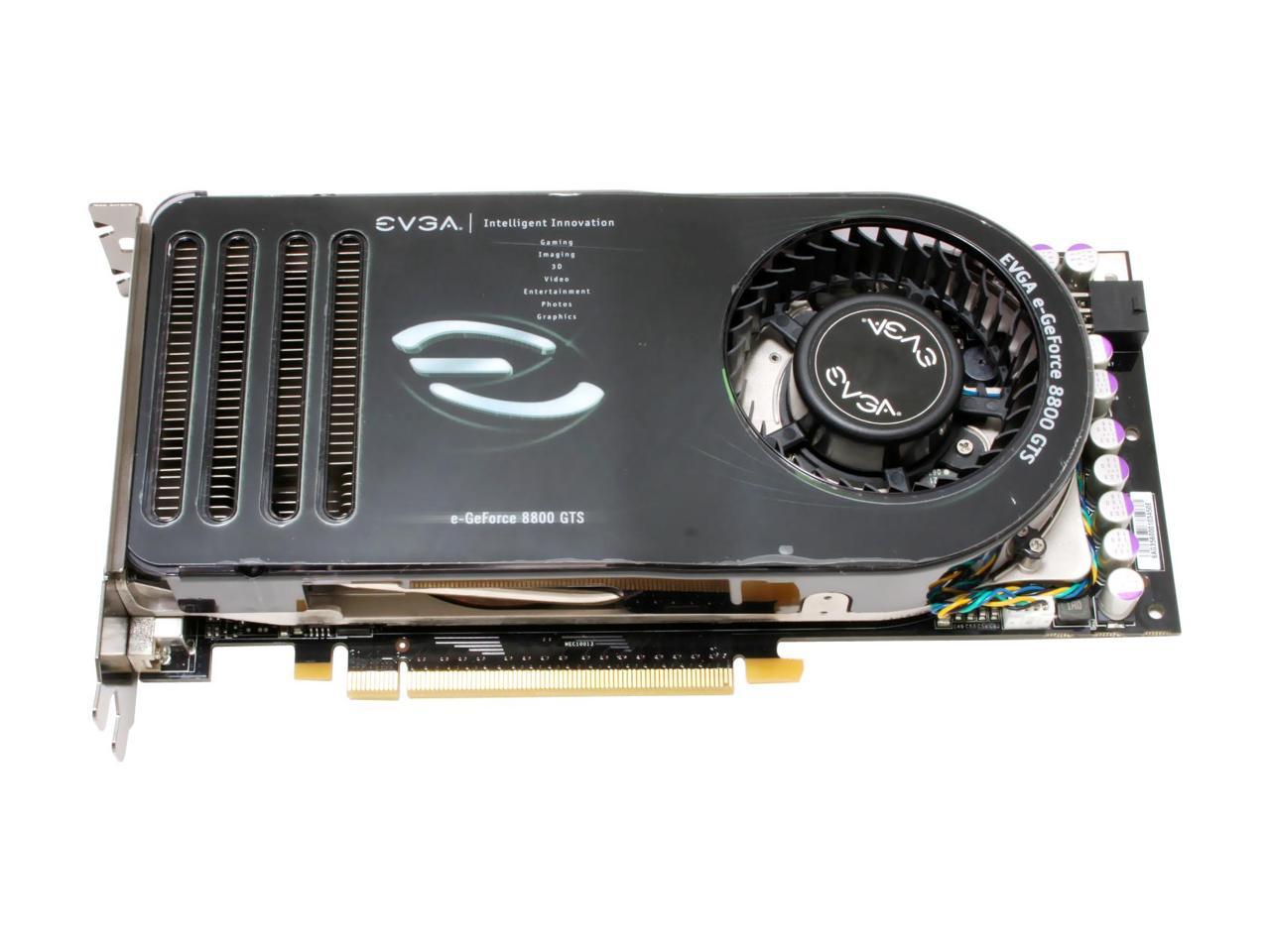 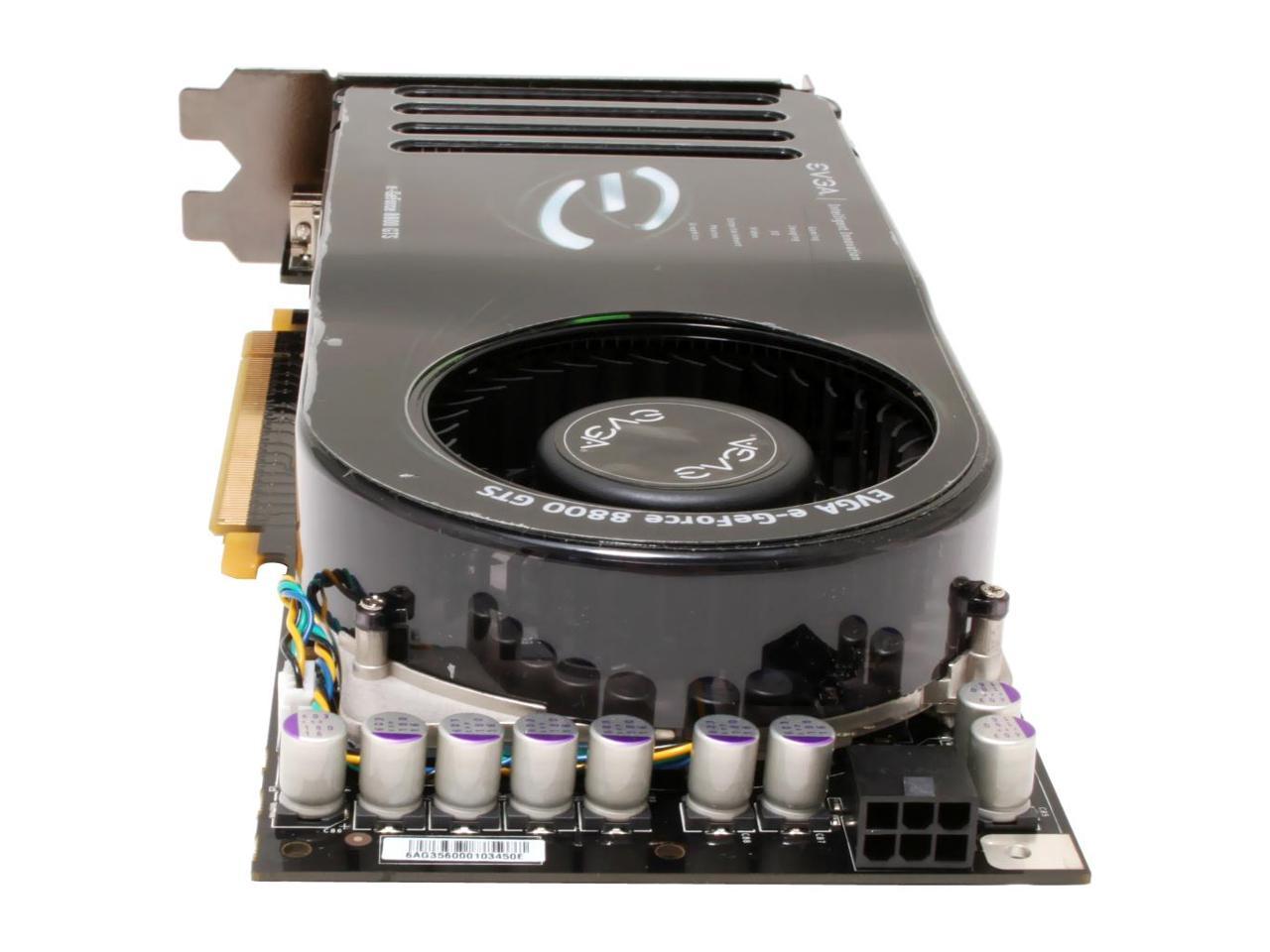 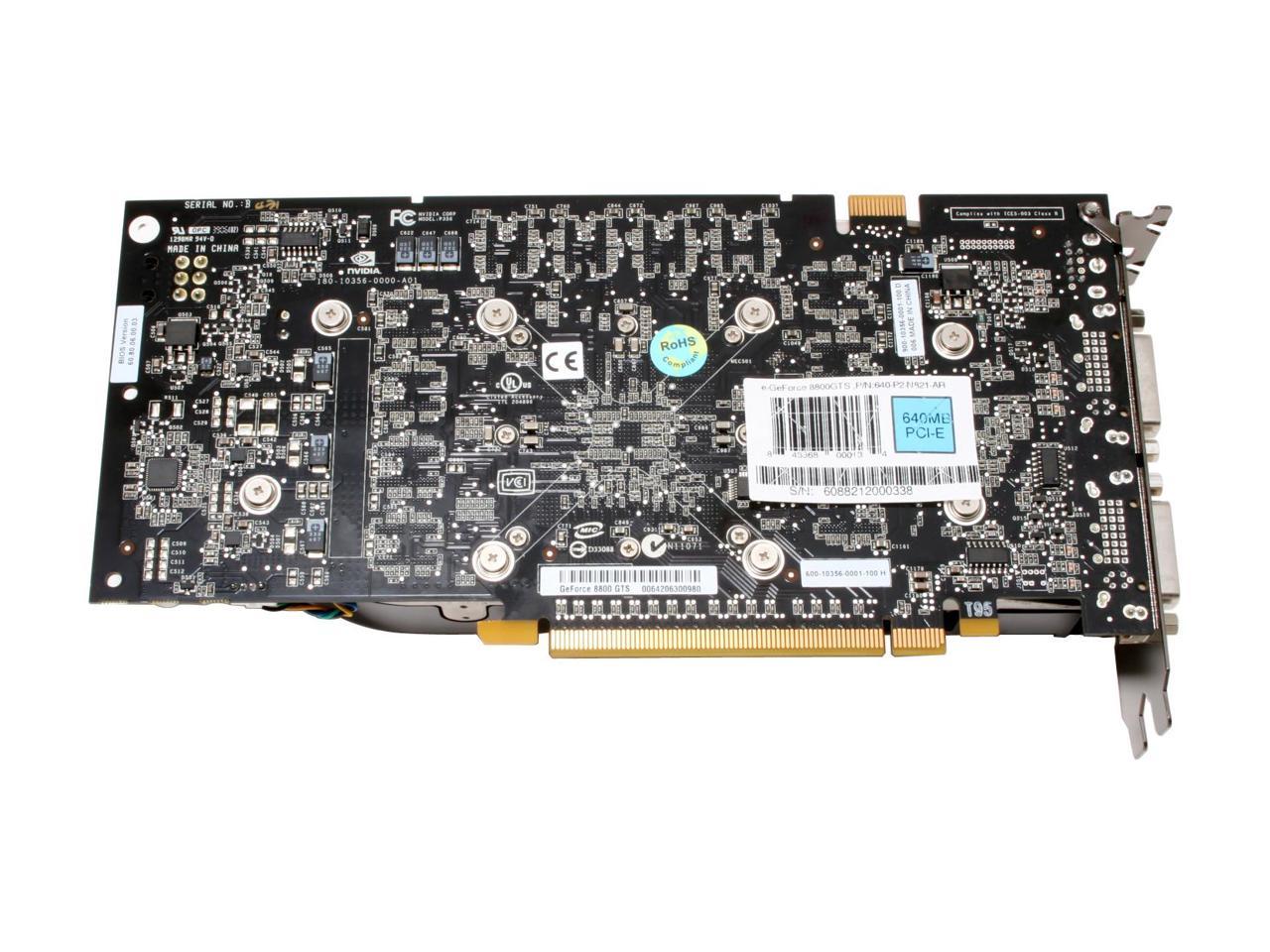 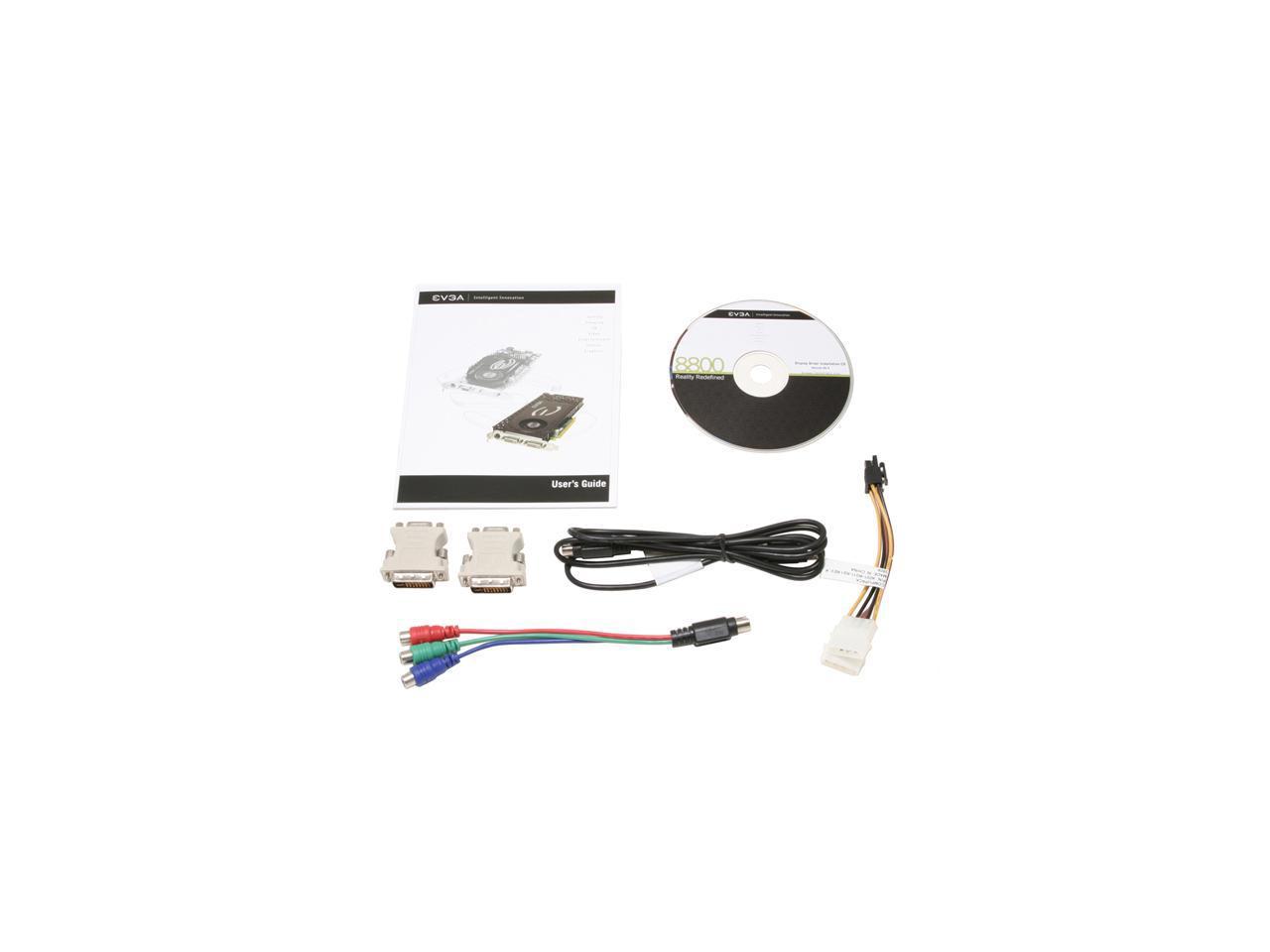 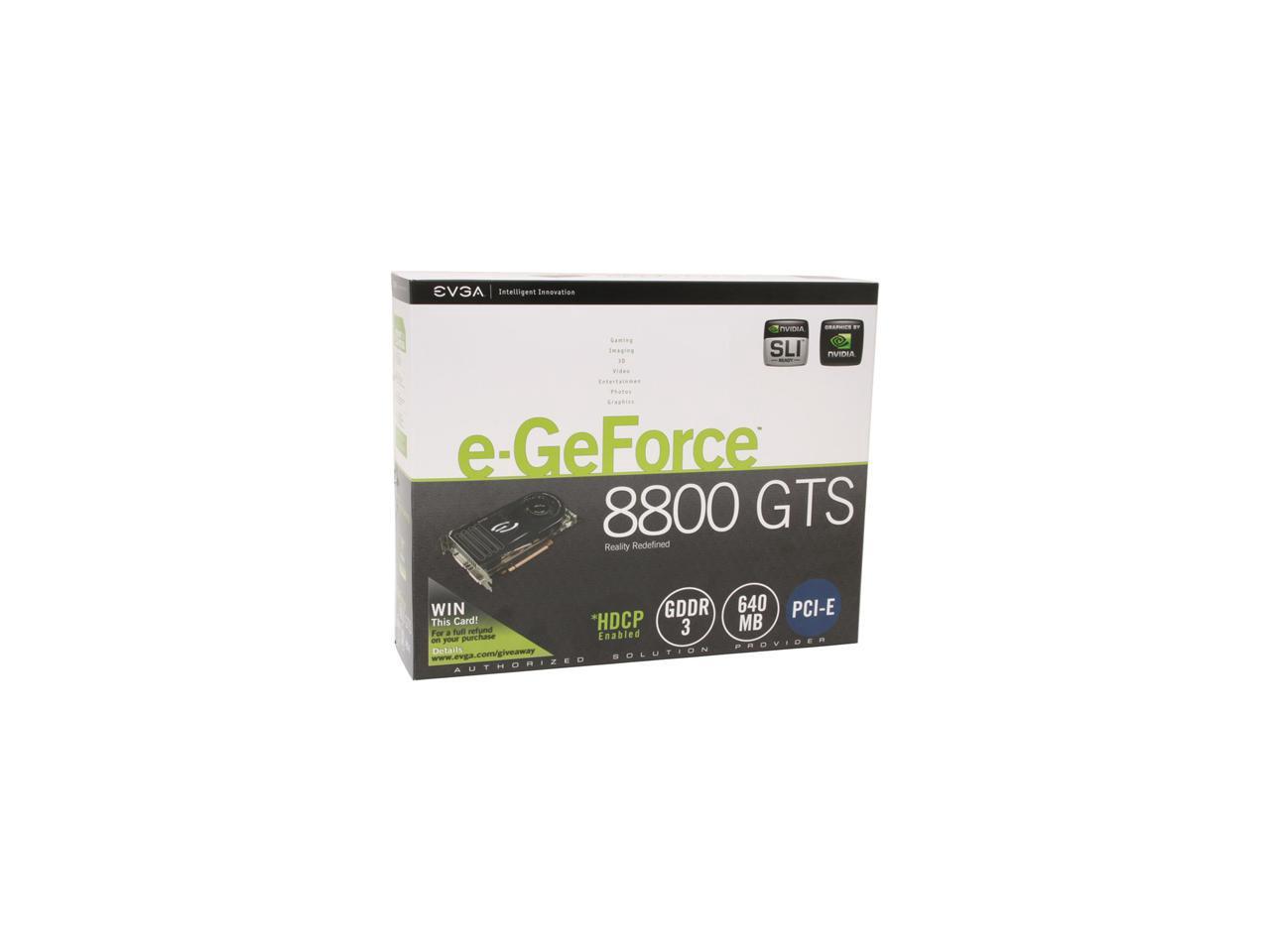 (1,040) Write a Review
OUT OF STOCK.
Overview
Specs
Reviews
Designed to levitate your gaming experience to stratospheric heights, the EVGA 640-P2-N821-AR represents the latest in graphic technology. Built around NVIDIA's latest GPU core (GeForce 8800GTS), this PCI-E graphic card redefines the term "gaming". Encompassing the revolutionary new NVIDIA unified architecture (with GigaThread technology); this graphic card simultaneously processes multi-threaded shader instructions to reproduce rich 3D graphics details in real-time.
Its 640 MB 320-Bit GDDR3 memory has a clock speed of 1600 MHz, and as such lets this advanced card run the richest games at their highest settings. Featuring full DirectX 10 support, this card is fully geared for the inevitable onslaught of the next-generation Microsoft Windows Vista. The NVIDIA PureVideo HD Technology offers high-definition video decoding and delivers videos with unprecedented clarity to convert your PC into a high-end home-theater system.
The NVIDIA Lumenex Engine delivers spectacular image quality and high floating point accuracy at ultra-high frame rates, and their Quantum Effects Technology results in a new level of gaming performance, as it lets the major physics computation to be done by the GPU itself, freeing the core CPU for other tasks. The EVGA 640-P2-N821-AR is SLI enabled, and as such you can connect two of these behemoths to get the penultimate gaming system.

Pros: 640MB of video memory! Overclocks to (almost) 8800GTX performance and is a solid match for the 2900XT when overclocked.

Overall Review: I upgraded to this after 3 months with my 320MB 8800GTS and boy am I happy. Oblivion ran well before, but now it runs amazingly smooth on higher settings. Surprisingly, this runs 5 or 6 degrees Celsius cooler than my 320MB version. That, I figure, is due to the lower clock and memory settings. This makes me happy since I'm not even overclocking it and getting better performance. However, I did test it overclocked and the temps did get upwards of 70 degrees Celsius. For the price, can't beat the results. Drivers are finally coming around and I'm definitely seeing better performance. Who knows what it does in DX10, but, frankly, at this point, I don't care.

Pros: Setup exclusively for OBLIVION. Have 2 of these running in SLI since last two months. I use them in AFR1 mode, and have seen/felt reduction in temps. on both of them, compared to when they were when used individually. I guess each processes an Alternate Frame, so the load has reduced. BEFORE each gaming session, I use Riva*Tuner to set the FANs @80% and clocks @ 621/918,otherwise I leave them at defaults. No issues. Max temps each has ever touched is 71 deg C. Also, the nVIDIA driver i'm using 158.19 allows me to set Anistropic Filtering = 16x, Antialiasing Mode = Override application setting, AA Transparency =Multisampling AND THE CREAM setting Antialiasing = SLI16x or SLI32xQ (max). Monitor res is 1680 x 1050 and at SLI32xQ, its as close to reality as I can get !The framerate does drop down to around 20-24 fps (SLI32xQ) in the forests, but for the awesome quality I get, its acceptable. Hmmm..it does come down to around 15 fps in Eshme's Boutique due to the hi-res models and clothes

Overall Review: They replaced a 7900 GS. I uninstalled the 7900 drivers thru XP control panel and for the first one week the 8800s were clamped at 256 MB RAM limit. Then came across some blogs to clean out the 7900 drivers. Did a fresh 97.92 (now updated to 158.19) install and the 8800s now operate in 400 -620 MB range. I did remove one card's heatsink and replace the GPU thermal paste with ArcticSilver5, but saw only 2-3 deg C reduction in temps. Nothing to be excited about. Best to leave them alone and let the EVGA warranty handle it. I did contact EVGA once for a techincal question, and was surprised at their quick and to the point response. Really gives me a good sense of security over my investment. I'm no millionaire..this is just addiction !!

Pros: This is the latest and greatest (aside from the GTX) and only requires one power input. I thought it would be loud but it is much quieter than the 7600GT BFG that I had in previously. Amazing performance, runs CoH on high and ULTRA settings 1280x1024 88fps avg, 42 min, 225max according to internal game test.

Cons: Smaller than the GTX "skateboard" but still rather large considering it's the length of my ASUS, goes all the way to the drives. Price, not a midrange card but you pay for it. May be $400 in 3 months buy why wait!?

Pros: Blazing fast, polished drivers and game compatibility considering the G80/8800 is so new. Fan is extremely quiet for a card that runs relatively hot (82C under load). I mainly run an older game (FFXI), but it brought my old rig and 2 video cards (9700pro and 6800GS) to their knees in some situations. I'm running at a constant 29 FPS (max) @1280x1024 in all situations now with only a few frame drops due to spell effects, and I can FRAPs it all up as well. Still pricey but dropped ~$30 in the week or two since I bought mine... definitely worth it and I may get a 2nd for SLI in the future.

Cons: Still has some game compatibility issues. FFXI has a small but annoying problem with the GUI overlay menus. Not game-stopping, but definitely noticeable and annoying. Looked through the driver notes and there seem to be some problems still with other popular titles. SLI mode still seems to have problems as well, so if you're buying this card strictly for SLI, may want to do some research first or wait a bit and let them work out the bugs. Lots of people are going to mention price, but you get what you pay for in performance++++ with this card so no complaints here.

Overall Review: I rarely buy top-of-the-line video cards, but when I read the reviews about the G80 and 8800 series cards, I knew we were looking at a gaming breakthrough similar to the R300 (9700pro). The next DX10 ATI GPU may be comparable or faster, but the 8800 series is hands-down the fastest card available today. The sheer size of the GPU and raw power of this card (faster than 2 of the previous flagship cards in SLI) will have you ready for any game today and as well as the next generation of DX10 titles.

Pros: Very quiet for how big it is. My old ATI X800XL was much, much louder. This thing averages 45-50 fps in FEAR running at 1680x1050 with everything cranked and vsync on!! Haven't tried it with vsync off, but I'd imagine I'd average almost 60 fps with it disabled. My minimum framerate at these settings in FEAR is 30 fps. Sweet. DirectX 10 compliant. If you want to play Crysis in all it's glory next year this card is a must. This card truly is "vista ready."

Cons: It's not the 8800 GTX. Get's hot. My CPU (AMD Athlon X2 4800) runs 3 degrees hotter with this card in my system. This card is long, though not as long as it's big brother. I had to take out one of my drive bays in my Aspire X navigator case so I could plug in the PCI-E power cable. This can be a problem with some cases if you have three HDD's plus a media reader\floppy. Shouldn't have too much trouble getting it to fit though.

Overall Review: This card is faster than any other card besides the 8800 GTX and will probably beat most SLI/Crossfire setups as well. The price of it is only going to go down making it even more attractive.

Cons: Drains a lot of power. A good 550-600w power supply should do it, but I really wouldn't go lower - my 480w is barely doing it as it is, and I really need to get a new one for this card. The card itself seems to run a little warm.

Overall Review: Price is a bit high, but it will be until the ATi equivalent is out. If you have the cash and don't want to wait for ATi, get one of these bad boys now, you won't be disappointed.

Cons: Barely fit in the case with the extra case fan attached.

Pros: Upgraded from 7900GS to to maximize Oblivian settings and man does it fly at 1280x1024. Will soon upgrade from 19" to 24" LCD and expect game to play at high if not highest settings. Card is very quiet when gaming although I have a well ventilated case with 4 120mm fans. Perhaps those who complained about fan noise have not so well ventlated cases.

Cons: card is large although not quite as long as the GTX. Both fit my P160 case. Card requires minimum 26A on 12v rail. My OCZ Modstream has 28A but I upgraded to a Corsair 620 for future expansion.

Overall Review: I bought eVGA fot their good rep, lifetime warranty and step up program. I don't believe I'll have to 'step up' to the GTX. Also I wanted the 'Dark Messiah' game anyway. Found out if you register with evga within 30 days you can also buy "free" RMA mailing and crosship for $x should you ever need it.