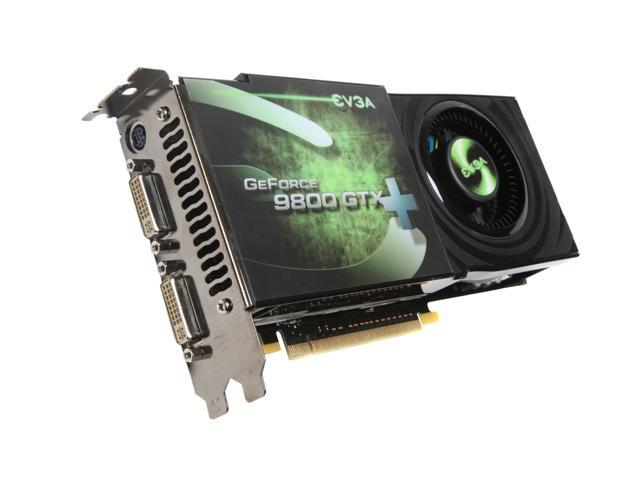 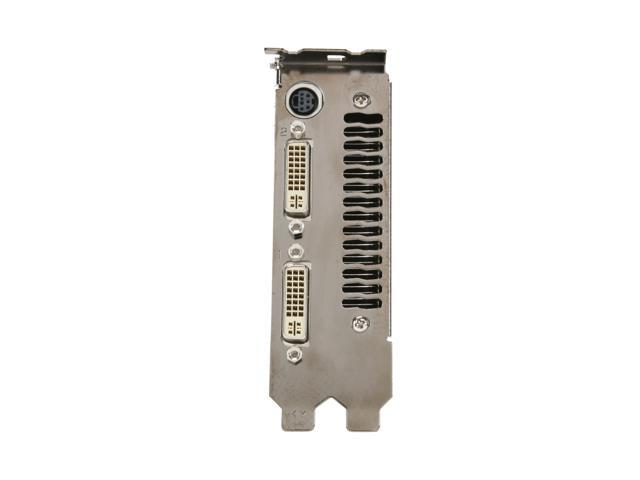 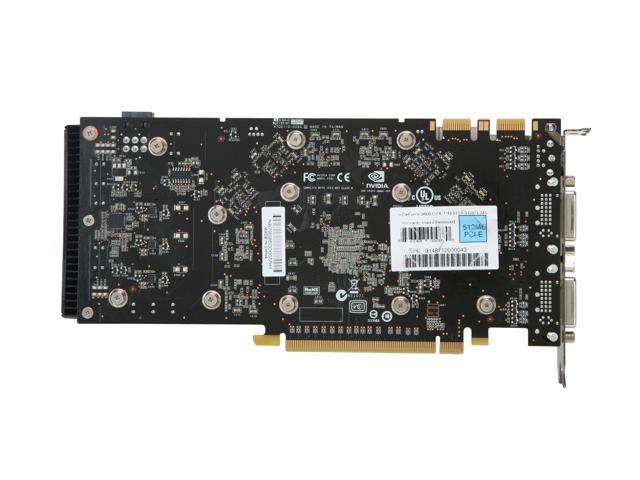 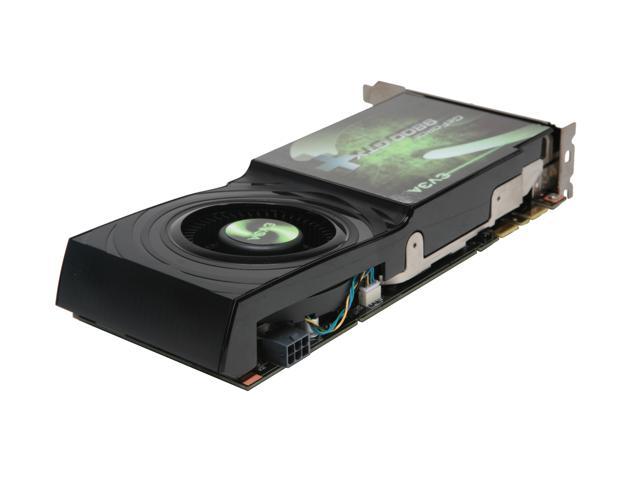 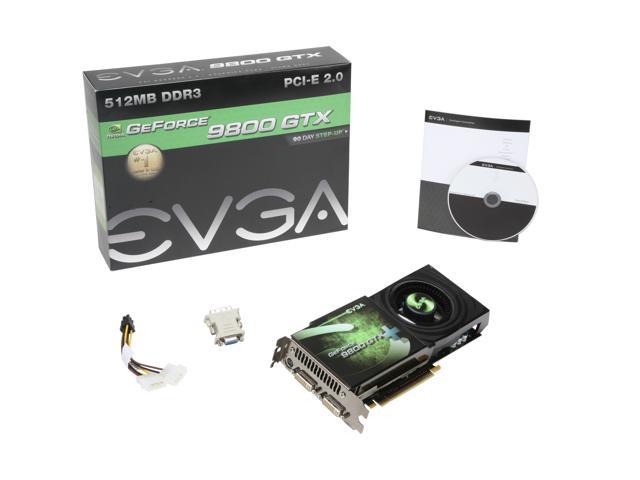 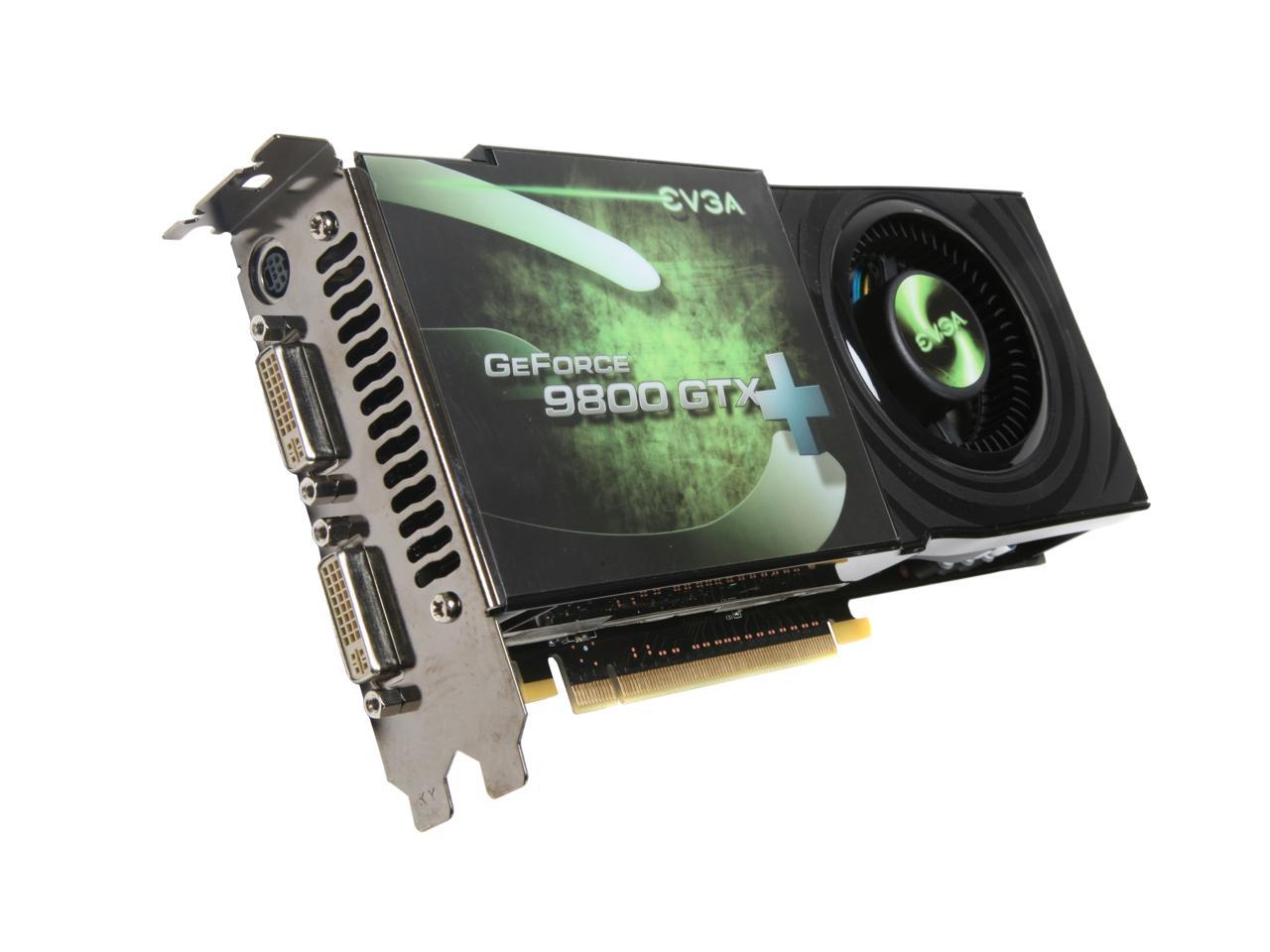 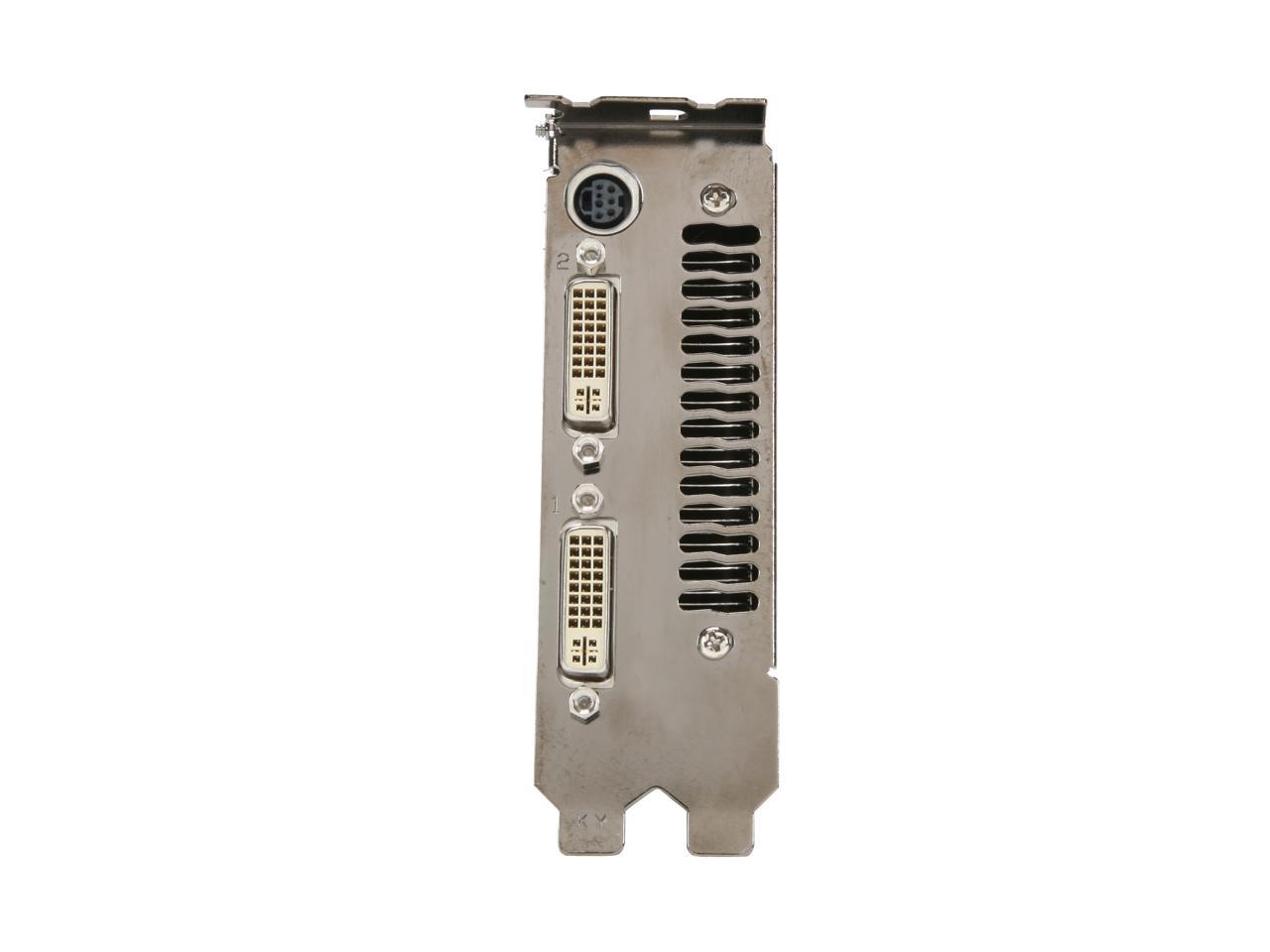 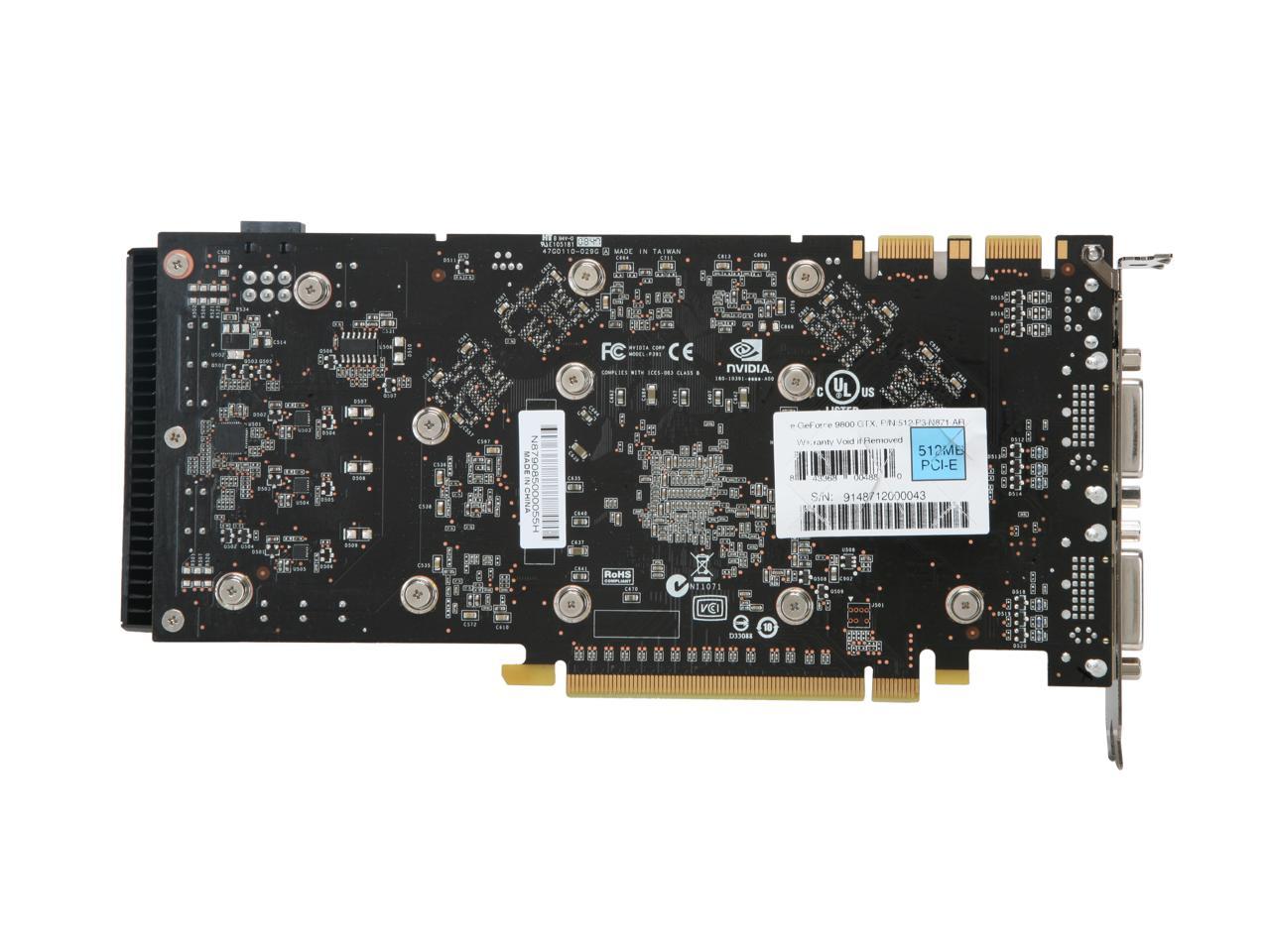 (1,129) Write a Review
OUT OF STOCK.
Overview
Specs
Reviews
NVIDIA's ninth generation series of graphics cards brings cutting edge technology and advanced capabilities together for best-in-class performance. The 9800GTX is a balanced solution for all your graphic needs. It’s Microsoft Vista ready and equipped with a PCI-Express 2.0 interface for the most up-to-date system. The 9800 supports Quad SLI which more than doubles your performance by running up to four graphics cards for insane flow rates.
The card's core clock runs at 675MHz relieving your CPU of pixel crunching duty. Data surges through the 9800's 128 stream processors which are fed by 512MB of 256-bit 2200MHz GDDR3 memory. Support for DirectX 10, Shader Model 4.0, OpenGL 2.0 and NVIDIA's PureVideoHD render even the most intense environmental effects, heavy shading, multiple light sources, or HD DVD video with brilliant clarity.
Twin dual-linked DVI and 400 MHz RAMDAC lets you display 2560 x 1600 resolution video and graphics on even the largest monitors, or output to other video displays via the S-Video and HDTV connectors for maximum flexibility. The 9800 delivers fluid frame rates and HD video with solid performance at a price that'll still leave money in your pocket.

Cons: Possible quirky drivers as with all new cards. Length of card is easily 10-11 inches. When other reviews say you need a modified mid-size or a full case...you really need that. Plently of room in a CMS830. Heat without proper air flow or cooling.

Overall Review: Erratic rants and raves of 8xxx series owners leaves a bad taste. Review your own cards. I understand the need for most people to be on the bleeding edge of technology. But if you continue on that "trend" you are going to be broke and never see any performance increase from XX framerate to XX framerate. If you are smart you will compare your current VGA setup to this and decide if its the right upgrade for you. First time builders/buyers you have nothing to lose. **COOLERMASTER Stacker 830, ASUS M2n-Sli 570, FX-62 @ 3.0, 2GB Ballistix PC2-6400, CORSAIR HX620PSU, 350 WD Caviar, 200 SG Barracuda**

Pros: A dramatic improvement over my EVGA 8600gt, mostly in terms of gaming speed (enormous FPS improvement), but also noticable graphics improvement (clearly better shading and physics handling). Runs everything I throw at it on highest settings, no problem. Not running SLI but glad to know I can someday. Easy installation. As always, fast NewEgg delivery. This card may not be top-of-the-line anymore, but even if you're a hardcore gamer, as of this writing, it should do absolutely everything you want it to, and the price is right, especially compared to the newer stuff coming out, which can be double or triple this price. Stays about as cool (or even cooler??) as my 8600gt.

Cons: Requires more power than my 8600gt did. Actually blew my 500 watt power supply out within two days of install. Not good. Box says 450 watt is required. I say make that 550 to be on the safe side. Go much higher (650+ watt) if you intend to SLI. This card is a beast. Not just in terms of power, but also sheer size. As has been said numerous times before - make sure this is gonna fit in your case. I have a really large case and still had to maneuver some stuff around to get it to fit. I have absolutely no idea how I'd SLI two of these monsters. I just don't know where the room would be for it, even in a big case. Runs slightly louder than my 8600gt, I can actually hear this one working, which isn't the biggest deal in the world, since my gaming audio is usually cranked up as well.

Overall Review: For the price, I think this card will deservedly remain at the top of the list for a while yet. It's a powerhouse and it makes games, especially the newer ones, look just righteous. You will be amazed at the frames-per-second you achieve with this thing, even at super high settings. I no longer have to worry whether or not my rig can "handle" new games. With the 8600gt, running games on high settings was becoming a thing of the past. Many of the newer games were running in slow motion or I'd have to crank them down. No longer. Now I can do it all again, and for the price, I don't mind if I only use it a few years before upgrading. This should handle everything for a long while. Win 7 64 bit works great, and going from 8600gt to 9800gtx+ meant (as of this writing), I didn't even have to update the driver. I will stay with EVGA, GeForce, and NewEgg. It's a truly winning combo. Get this card. It wins awards and is at the top of the ratings list for a reason.

Pros: This card blew me away. Crysis runs smooth as silk at the very highest settings on DX10 with 4xAA. Overclocks wonderfully, and it's as quiet as a mouse.

Cons: It doesn't cook my breakfast yet.

Overall Review: This card is gigantic, and getting it to fit inside my case was.. an insteresting expierence. Ended up moving my hard drives (most people seem to have to do the same thing.) If the new line due out over summer is shows any significant improvements, I may use the step up plan. I don't see this card becoming outdated anytime soon though.

Pros: I installed it today. It was as easy as putting it into the PCI slot, turning on the computer, and installing the drivers from the CD. L4D looks awesome on the highest graphics settings, and I get a constant 60 fps (which might be what it's capped at). Quiet fan. Less noticeable than the 6600GT I had. To clear it up for new buyers, this is a 9800 GTX+. The box you get will have a '+' on it. GPU-Z confirms that it has the 55nm core. The only accessories it comes with are a a DVI-to-VGA converter and the adapter to turn two 4-pin molex connectors into a 6-pin PCI connector. Also, this card only requires one 6-pin power connector. Newegg has it mistakenly listed as "2 x 6 Pin."

Cons: Size, but my mid-size ATX case has enough room in between the graphics card and the hard drives for the SATA power cables. The card is also perfectly offset from my hard drives so I can still use straight SATA data cables. This may not be the case for everybody. I, however, didn't have to move any hard drives to make it fit. No stickers, despite the fact that the little folder inside says "This folder contains: EVGA Case Stickers."

Cons: Turn the fan up to 100% and is sounds like a jet is taking off inside my computer. Can't complain about the cooling though. Only went as high as 56c overclocked. Maybe I will look at aftermarket coolers when they come out. Or just use headphones when gaming.

Overall Review: New system is outstanding. No problems with any games. I can't stop smiling.

Pros: After carefully reviewing my PSU specs and room, I decided that this card was a nice leap forward in performance VS power needs for my "stock" system. For those of you who have a Dell XPS 410 system, this *WILL* fit your system (if you have the 375w / 30 amp) PSU just fine. That was the biggest factor for me - not so much the added power draw. Upgrade from a 7900GS to this and the results are amazing. All games are fluid and also remain fluid at higher settings I wouldn't (or couldn't) play on before. For example, 7900GS would play Crysis Warhead comfortably on Medium but struggle on high or very high. This new GTX+ plays it comfortably on high and decently well on very high - wow! The other note is that it is backwards compatible with PCIe 1.0 / 1.1 so it still works just fine on my "old" Dell board which isn't PCIe 2.0. Amazing if in reality if I'm only using half of the power of this card!

Cons: None! As mentioned, it's a good-sized card though. Will just barely fit in a Dell XPS 410 case.

Overall Review: Fan and black front housing practically touch the black heatsink casing on the system (like 1mm apart). Fan is very slightly blocked by the plastic housing but even still, this card remains fairly cool. 35C idle and at max, 65 under load. Not sure what my 7900GS ran at but I recalled from the Nvidia tools that it was likewise, always in the 60s if it didn't rev down. More good news - startup with fan running is only at 50% power. Rev-down control drops it to 35% and is thus nearly silent! Never had the fan go above 50% yet despite any game or setting used so far. Wow. It's even quiet (if manually set via EVGA controls) to 100%. How about that - a card far more powerful than my old one but that which is still quieter and (generally) consumes equal or slightly more power. Great job EVGA!! Got the + model of course. One six-pin power connector (which my 7900GS had needed anyway) is all you need. Works great so far - no issues. Tripled my 3dMark06 score.

Pros: Got this today (September 11, 2008). I was attracted to the low price. EVGA is a pretty good company. The 9800GTX has a black pcb with black DVI inputs in the back. Installed real easy. Same length as the 8800GTX, just a little bit thicker, though. I think it is the same weight too. I inspected the card for fingerprints, wear and tear, loose integrated circuits etc. to make sure I didn't get a used/refurbished one. Everything looks good. Nice solid construction, nothing looked or felt cheap. No driver issues. Doesn't seem to run hot, although I have 9 loud fans.

Cons: None. The top long/large EVGA logo sticker is coming undone in the middle, it doesn't bother me though, I'm just saying. I think it would have been cooler to have blue on the card instead of green. That's ok, though.

Overall Review: I am replacing an EVGA 8800GTX that I had for a year. I am not expecting great leaps in performance with the 9800GTX. I just wanted something with low cost and pretty good performance. I don't want to get too far behind in grapics cards. I also didn't want to spend the money on a GTX 280. I prefer to spend a lot less for last generation graphics card rather than spend a lot of money to be "current." My next card will most likely be the GTX280 within the next 6-12 months or whenever the price gets low enough that I feel comfortable paying for it. I believe the difference between a 9800GTX and a 9800GTX+,besides the speeds, is that the 9800GTX+ uses 55nm technology and the 9800GTX uses 65nm technology. Intel Core 2 Duo 2.66/EVGA 680i/8GB G.Skill DDR2 800/ /EVGA 9800GTX/Thermaltake 700W/Thermaltake Armor/ Western Digital Raptor 74GB 10,000/Windows Vista Ultimate x64/

Cons: frikin no cons! its worth every penny.

Overall Review: I wouldnt upgrade this card if you are already running a 8800 GTX,GTS (g92).. but i'm upgrading from a radeon x1600xt..I'm gonna order another in few weeks to SLI in my 680i mobo. I recommend atleast a 550W PSU..that way you know everything will get the power it needs.. I hope my review has helped anyone that needed help making a decision on clicking the buyout.