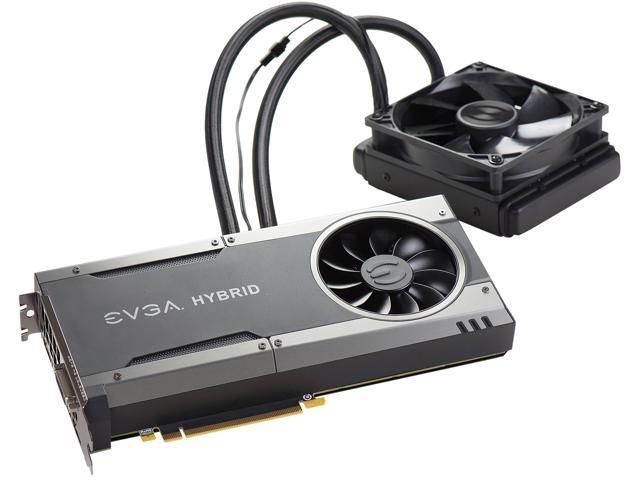 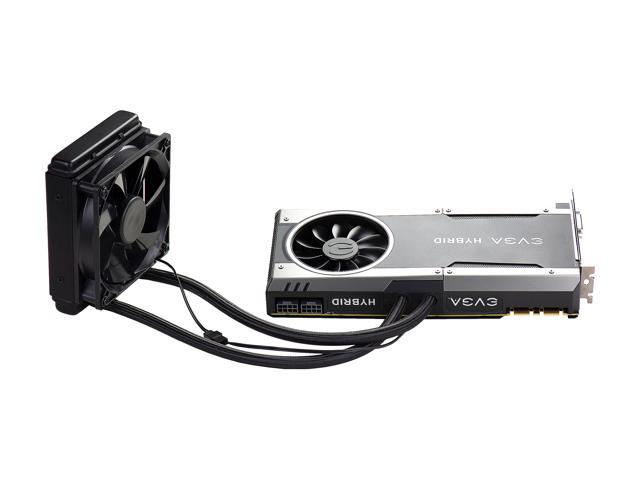 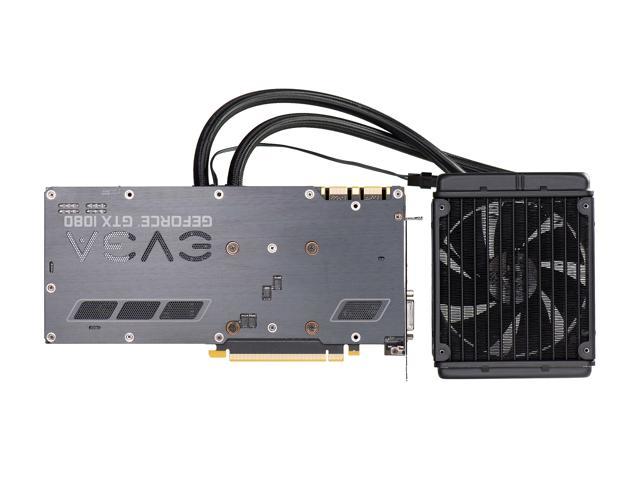 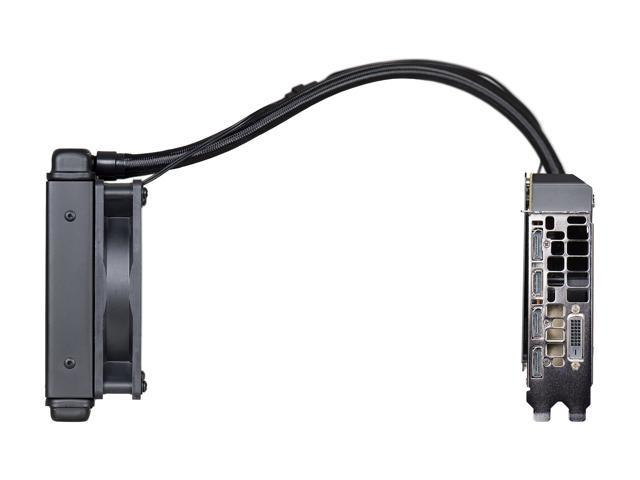 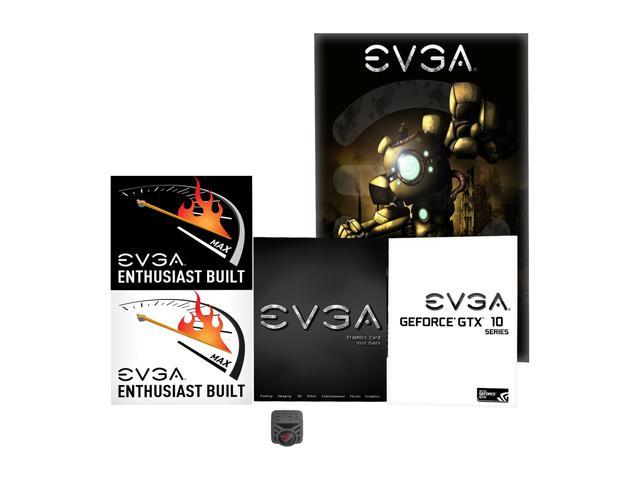 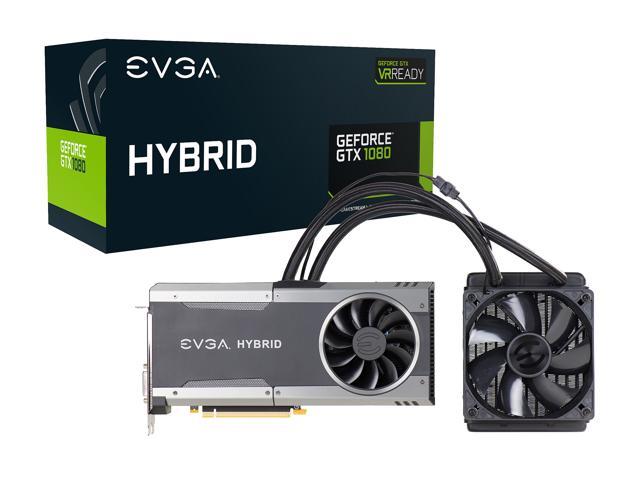 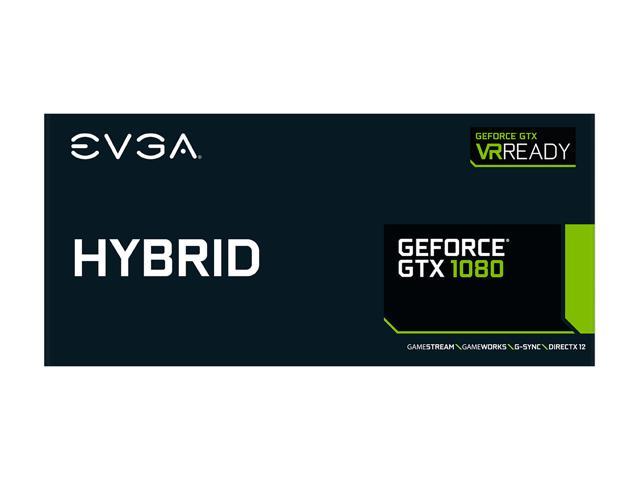 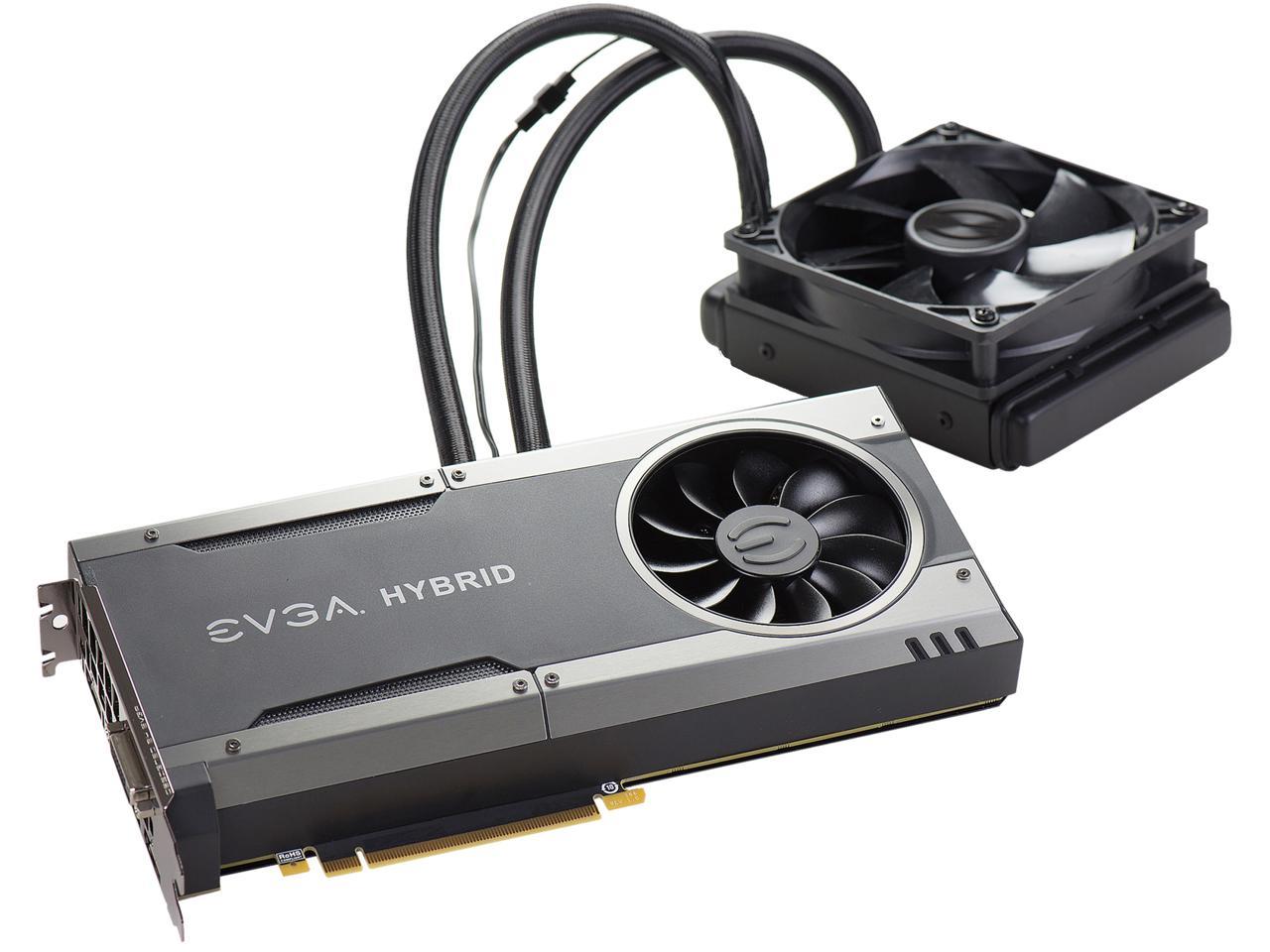 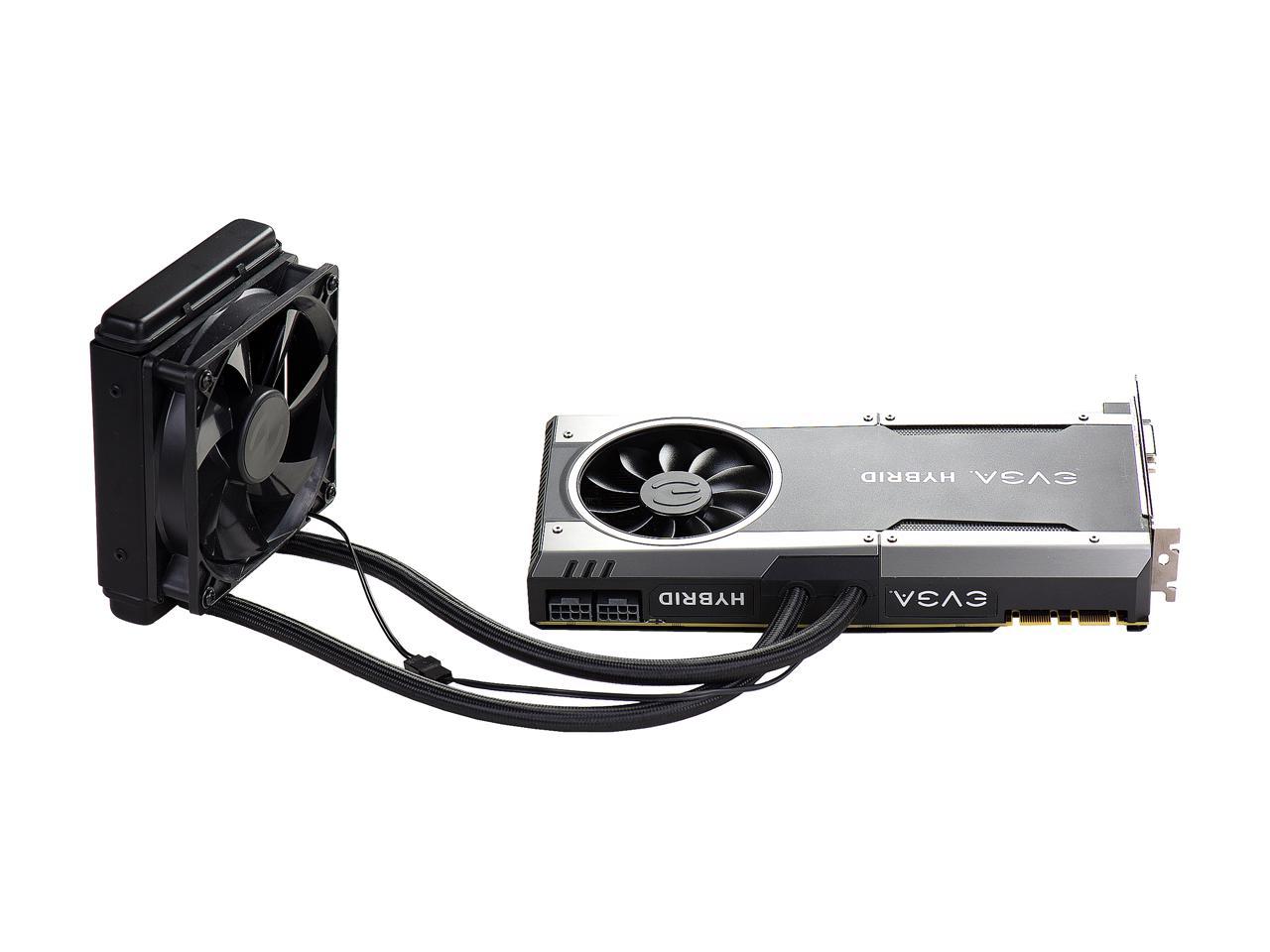 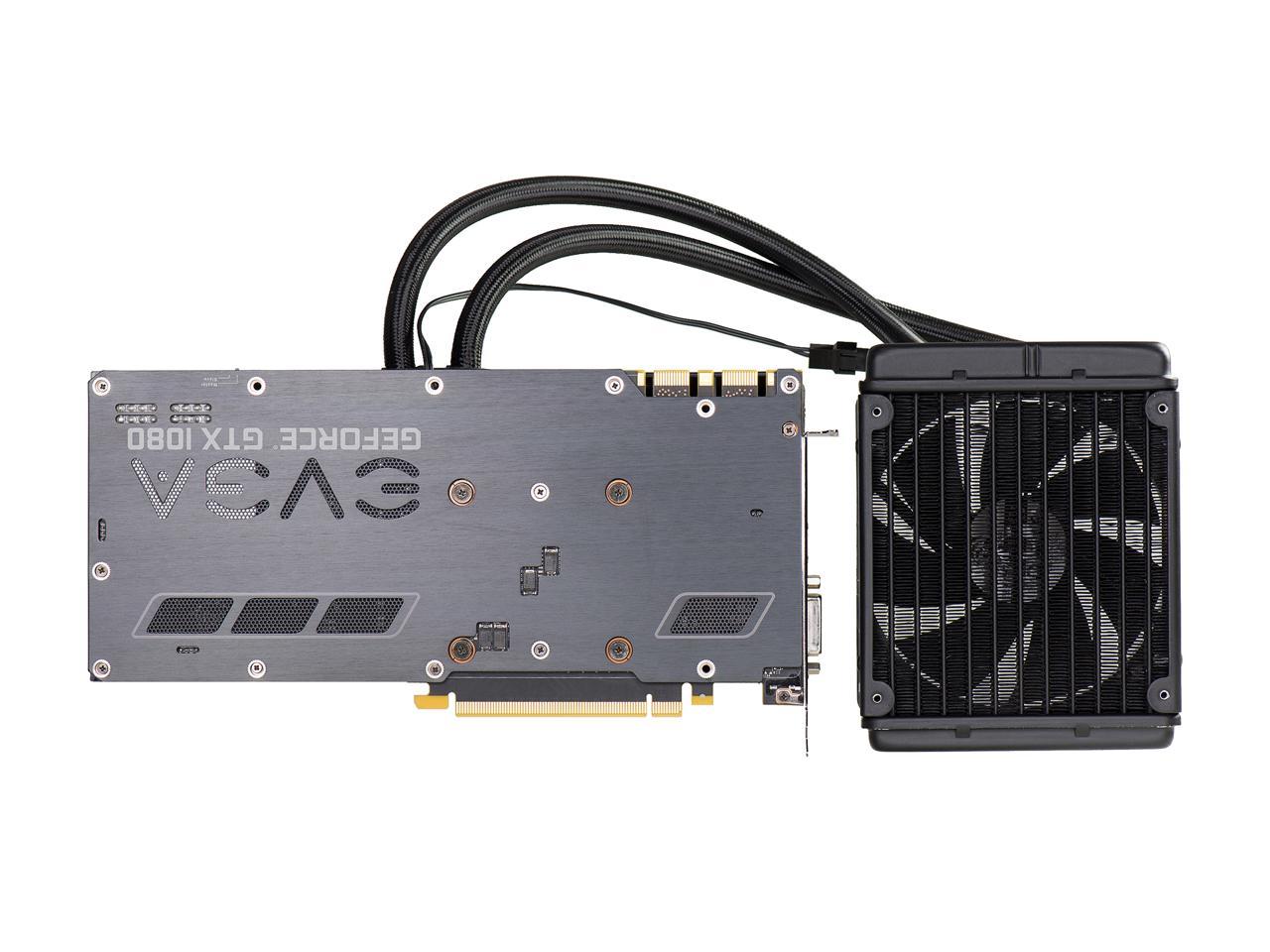 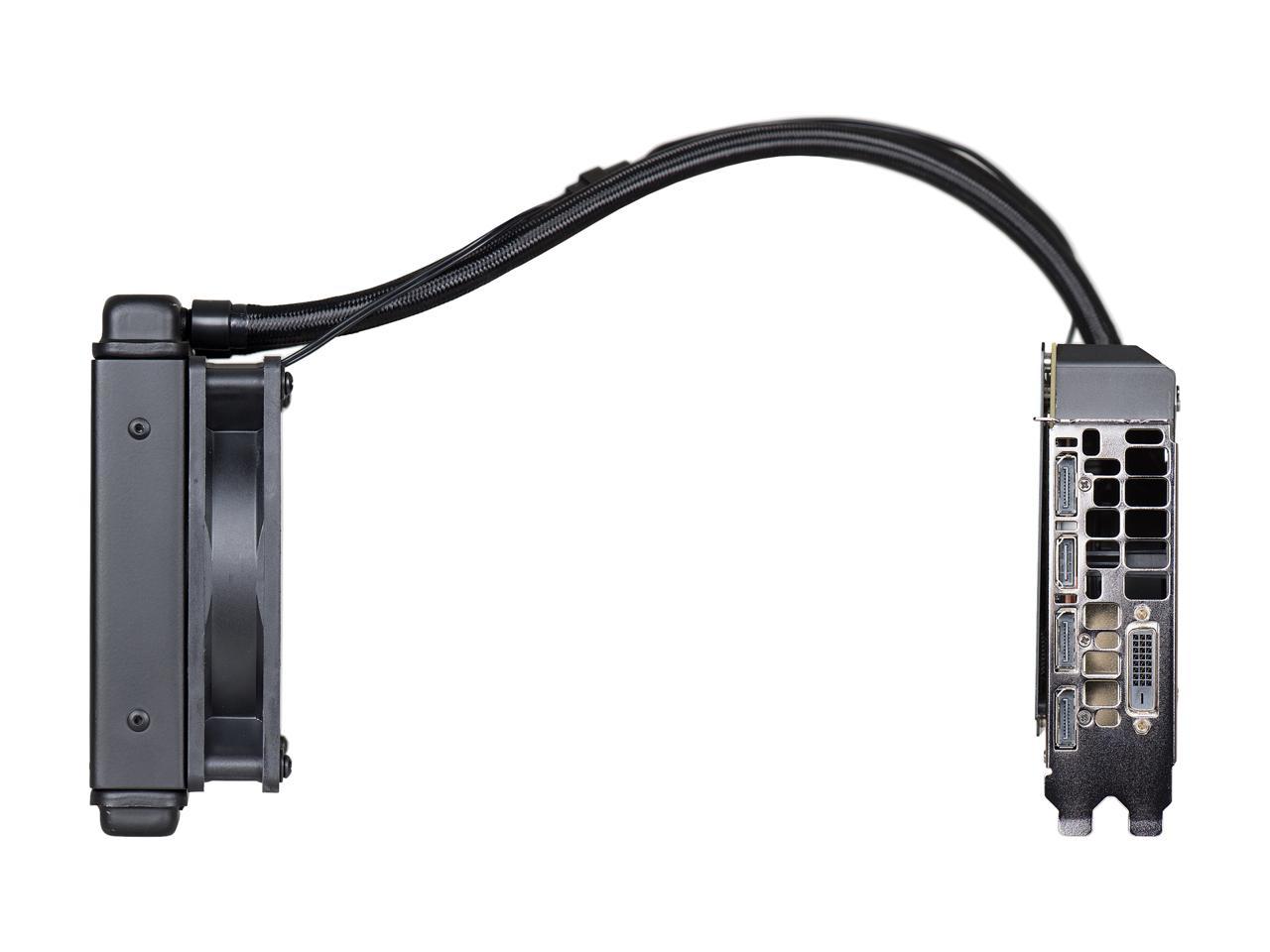 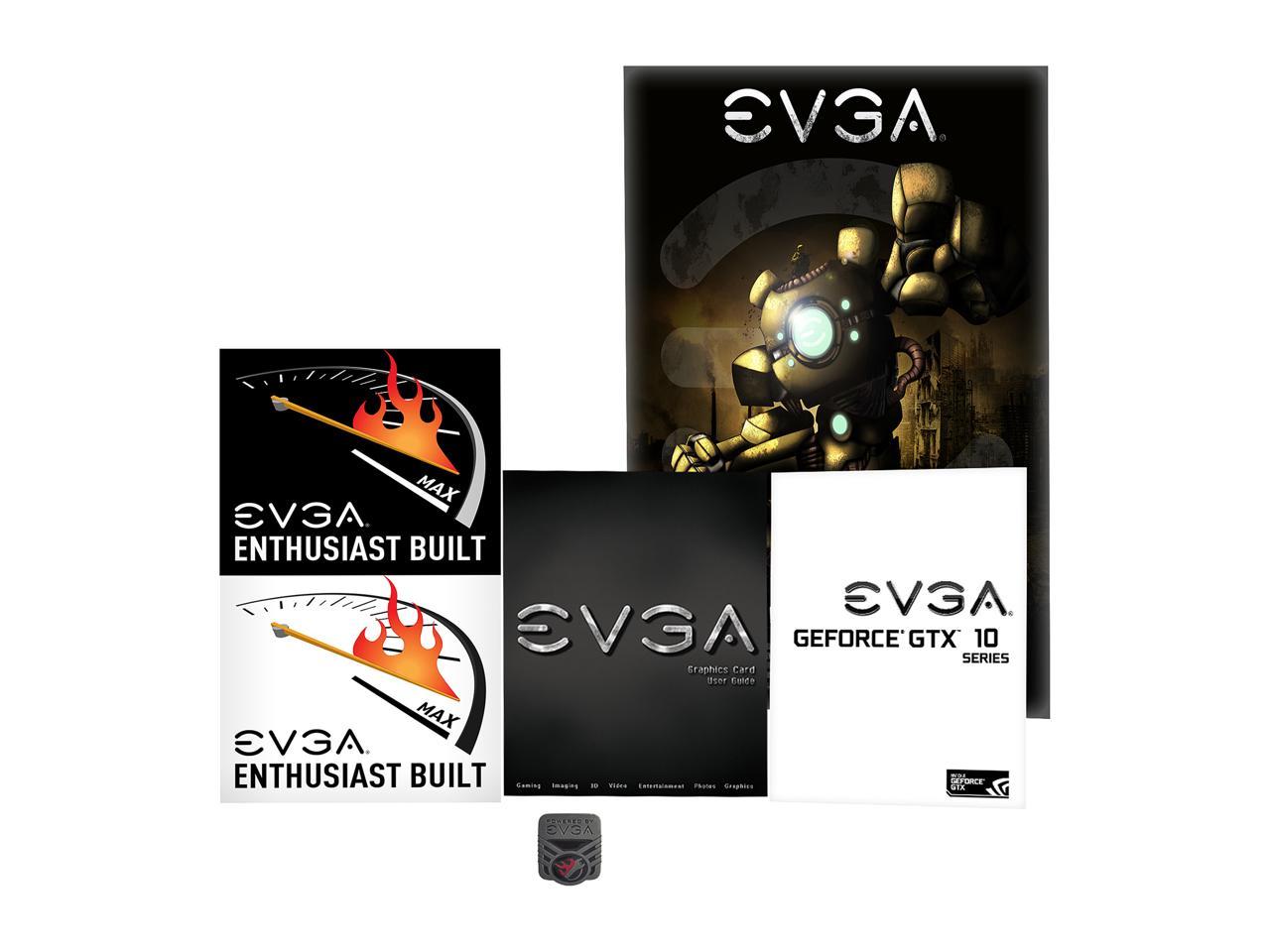 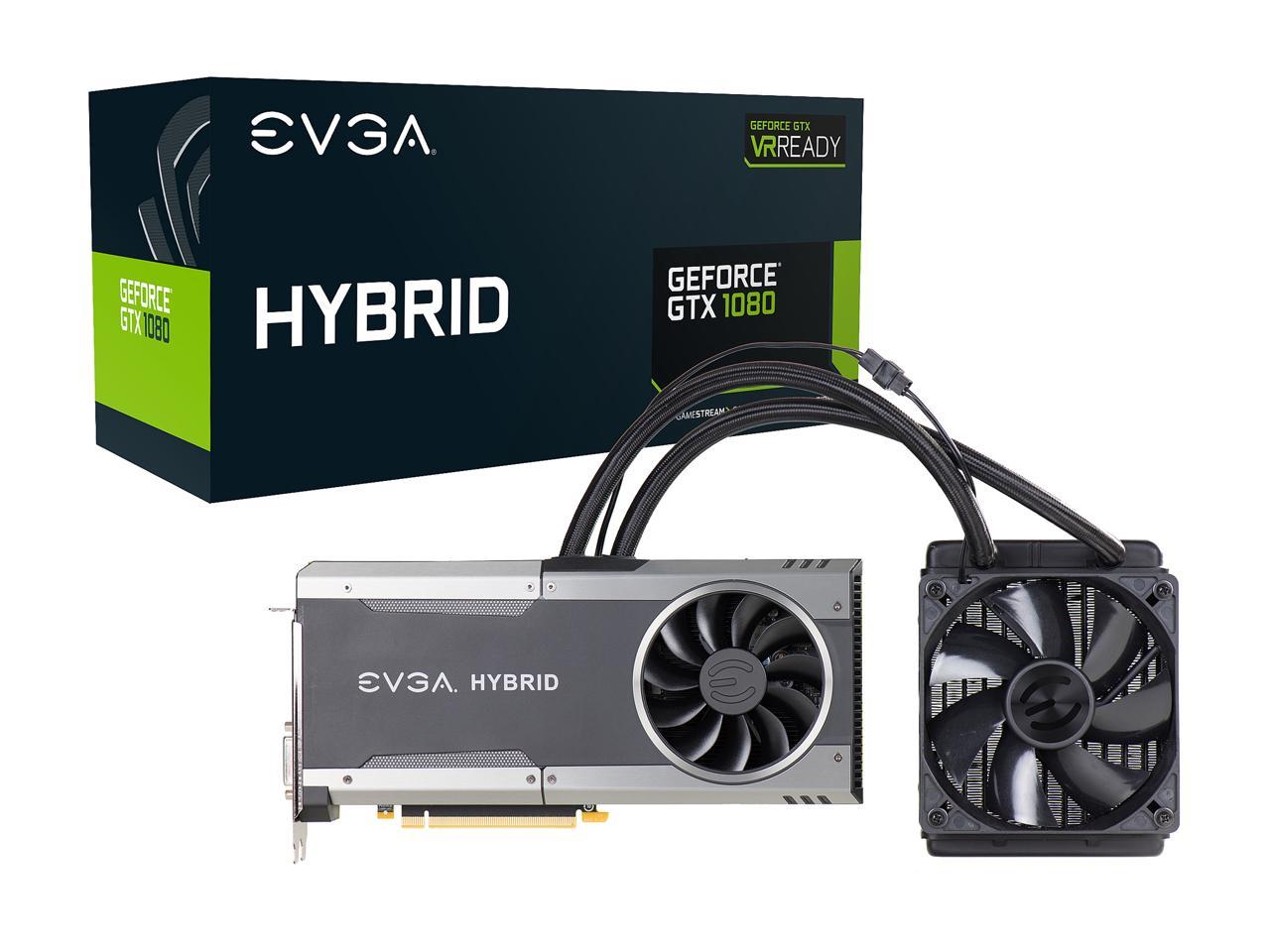 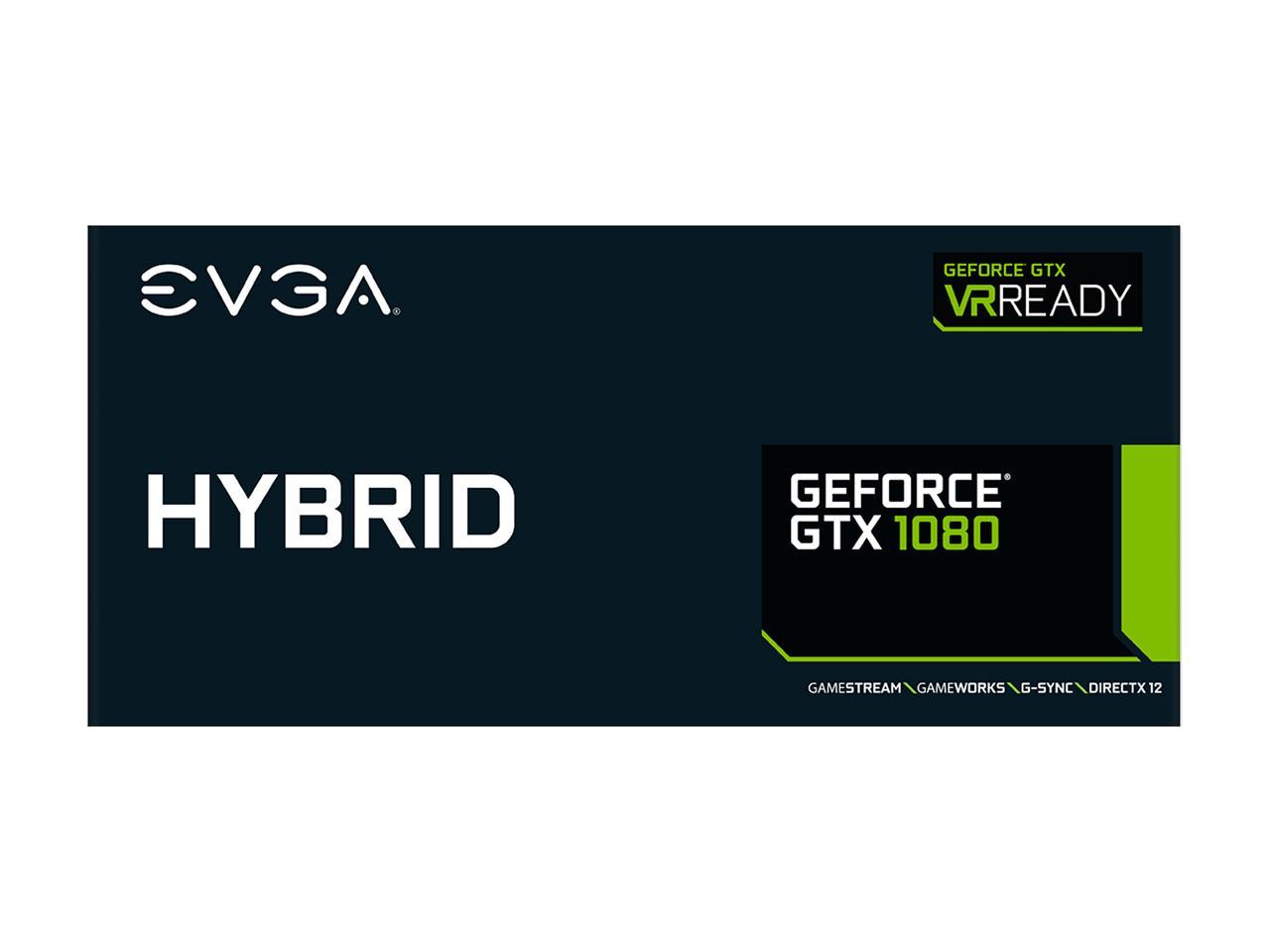 The already incredibly performing GTX 1080 just got better, it now comes with a maintenance free, self-contained water cooler. This can keep the GPU 20-30c cooler under load than heatsink/fan based coolers, and do so at a substantially reduced noise level. Allows for crystal clear 4k video, smooth gaming, and great overclocks!

The EVGA GeForce® GTX™ 1080 HYBRID features the most advanced GPU architecture ever made, designed to be the engine of next-generation gaming.

Intelligent wiring system and sleeved tubing make this on sleek cooler without the messy wires.

The next generation of EVGA PrecisionX has arrived with EVGA PresisionX OC. This new version of Presion is built for the NVIDIA Pascal architecture and combines the best of EVGA Precision and EVGA OC Scanner to give you never before seen overclocking features and built in automatic overclock tuning. An RGB LED that allows complete control of the color through EVGA Precision XOC.

Cons: - The stock fan isn't great but I didn't think it was a big deal, like others mentioned just buy a better 120 mm fan for less then $25

Overall Review: I went from a 780 to this card along with a 1440p monitor and I don't think I have ever noticed such a large visual improvement in any of my previous PC upgrades. The screen is gorgeous and I'm still getting >90 fps with the 1080 FTW. Honestly one of the things I was most impressed with was how quiet the card is. I know it's a little silly to stress that point but after years of 55-80 mm fans the difference is substantial. I really can't imagine going back to a none hybrid all-in-one card. I did purchase a Noctua NF-F12, which I would also recommend, to replace the stock fan so that helps a little too I'm sure. It's a 4 pin fan (the card takes 3 pin) which I plugged into a auxiliary fan input on my motherboard. Besides the larger fan, the constant speed also makes a big difference. I am using SpeedFan to keep it running at 1,500 rpm and it makes very little noise. The temperature of the gpu never exceeds 65 C under stress and there is no fan ramp so it's a constant sound which makes it less noticeable. The 65 C is slightly higher then what other reviewers are posting so it might need some tweaking but definitely manageable. I have a HAF X case so I secured the radiator into the case's 140 mm exhaust fan slot with the Noctua pushing air over the radiator and out the back of the case. I then moved the case 140 mm fan to the front above the hard drives (the expansion bays) and secured it with zip ties to push air over the ram and towards the CPU fan. It's probably not the most elegant solution but it works well in case anyone is looking for suggestions.

Pros: First and foremost, this card has the horsepower needed to drive large UHD and QUHD monitors WITHOUT SLI. Easily. It's super quiet. The fan that came included was meh so I just upgraded the fan to a Noctua NF-F12 Industrial PPC-3000 PWM. Probably a little overkill as you probably can get away with the standard 2000 but for about the exact same price you get a fan that knocks up the fan to 3000 should you need it. Probably won't until I OC this card, but for now, easy peezy. There's a lot of hubbub out there concerning what AMD is going to release in 2017. So much smack talk. For now, the 1080 is the BEST card, dollar for dollar, you can buy to run UHD and QUHD rigs. No half guessing. It rocks. Dual 390s won't do what this ONE card can do. I just upgraded from dual Sapphire Tri-X R9 290s in Xfire and the difference is night and day. I also went down from a triple monitor Eyefinity setup to a single LG 34UC88-B 34-Inch 21:9 Curved UltraWide QHD IPS Monitor at 3440x1440 and a normal 1080p IPS monitor for older games. I tested it with my dual 290s and then with the 1080 Hybrid. At full resolution, playing games like Tomb Raider 20 year, DOOM and Elite Dangerous I was getting, in Xfire with 290s, around 30fps. Max resolution everything on Ultra. With 1 1080 I get (the monitor has Freesync too which was meh with the 290s) 60fps solid and usually can get upwards of 80fps if the monitor is in game mode to 75hz. Granted, I don't play twitch shooters so if you're looking for that magic 120fps, 120hz, you'll have to go with a different monitor or wait until AMD actually has a great card available again (Summer 2017). I couldn't be happier with my purchase. I actually have another Hybrid on order to have these bad boys running in SLI and can't wait to see what numbers I get with those paired up. Pound for pound, the 1080 FTW HYbrid is the BEST 1080 card you can buy. OCs well, has liquid cooling built in (3 year warranty built in, upgradeable) and will run UHD and QUHD monitors with EASE. The card is big but no bigger than the 290s or 390s or even the older AMD 69XXs series or the Nvidia 9XX series or even the 8800s. I'm also running this card with an AMD FX 8350 BE. I haven't seen any bottlenecking at all so far and am pleasantly surprised. My Mobo is the Asus Sabertooth 990FX Gen 2 card, 16GB Gskill Ripjaw@2133, 1 WD Velociraptor 1TB and 1 Seagate Firecude Hybrid SSHD 1 TB, Win10-64 and Logitech G510, Logitech G502 .

Cons: The only con I have with the card is the fan is meh. However, if you're dropping $699 on a card you should be able to drop the extra $25 on that Noctua I got. Plug it into your mobo and run the 3000 PWM from your own settings without the Nvidia card OCX that comes with it. You'll get better fan speeds and controllable fan speeds.

Overall Review: If you're a graphic freak like I am, like to see all the eye candy on your UHD or QUHD (think 4k) monitors and are not seeing the numbers you want or the graphics like you want, you HAVE to see this card in action. It is blazing fast, monitorable, super nice OC abilities and comes pre-amped with a boost. Dollar for dollar, and I did my homework for about 3 weeks before upgrading (I'm a.n.a.l. like that) this is the BEST card on the market for your dollar. Easily. When AMD comes out with their new Vega 10 and 11 lines maybe I'll take a look at them. However, AMDs new line will NOT be coming out before summer 2017 probably and surely no non-reference boards to actually be able to buy. There's a lot of hype for AMDs new Vega line supposedly running at Titan X performance, however, if you think AMD won't have a premium price tag on those bad buys you'll still probably be better off running a 1080 or even have them in SLI. It's a no brainer. Listen, I ran Tomb Raider with everything, and I mean everything on ULTRA or as high as it would go, Nvidia hair on, and 4x AA and STILL got 60fps. These cards rock.

Cons: - Does not come with any adapters

Overall Review: Bought this card since I could not find a 1080Ti anywhere. This was an upgrade from a HD7950 I have had for years. Man, the difference is night and day! I paired this with a 144hz monitor @ 1080p and this thing handles every game at that resolution on ultra settings well above 60fps. Generally it's quite easy to get well over 100fps in any game I play with this setup. Have read a couple of reviews that complained about the stock fan. Gladly, I have had zero issues and it runs very quietly. Although the pump is louder now than when I first installed the card. Not sure what that's all about. But I should say that it is not distracting in the least as on a whole it is much quieter than the fans on my old HD7950 card. I'm not disappointed at all by my decision to get this instead of waiting on the Ti. At this price, I paid $589, it's an incredible value for the serious gamer.

Pros: This is a great card, I can easily run any game on ultra settings.

Cons: Card died about 2 months in. No biggie, I didn't do a warranty through NewEgg so they were unable to help. Called EVGA and was able to get a replacement in about a week. No issues with the second card as of about 3 months.

Overall Review: I would definitely recommend this.

Pros: - You can't go wrong with EVGA. This card never goes above 55 degrees C ever, no matter what you're throwing at it. Mine stays around 45-50 under 100% load because i connected the fan to the MB and i don't mind the noise of high rpms. - Looks incredible, the rgb logos, the back plate, everything... Besides the quality of the products EVGA customer service is the best i've ever seen. I bought a card that started having issues after multiple power outages and having no UPS protection at that time and they answered within 2-3 hours to my email and started the RMA process. They returned it in no time, working again. Don't use electronics of value without UPS.

Cons: You can't detach the entire fan cable from the card. You end up with a small cable hanging from the card if you wanna connect the fan directly to the MB.

Pros: -Fast -runs games at ultra no problem -no coil whine with mine -liquid cooled

Cons: -bit pricey but so far worth it

Cons: Only if you have a tight case, I could see someone having difficulty situating the stiff pump lines.

Pros: The Water Cooling ensures for very cold temperatures. (Max I have seen is 43C load on 2164 MHz.) Very quiet, but I do recommend picking up a slightly better fan than the stock GeForce one. Very overclock able, probably one of the best overclock able 1080's on the market. So far I have obtained up to 2164 MHz overclocked (Not accounting for the Ti in any forms). RGB Lighting is always a nice touch. Workhorse at any task and game, even on resolutions up to decent settings on 4k. Built on the FTW's PCB Chassis. Dual 8 Pin PCIE Power Connectors basically allow you to push out to the max of what the card is capable of, overclocking wise.

Cons: No known Cons as of 1 month of running it.

Overall Review: The 1080 Ti has just released for purchase, and this is of course something to think about. Personally I have decided to stay with the Hybrid because the stock 1080 Ti or Founders will run extremely loud, and you will get nothing near the temperatures of the Hybrid without a custom loop. The 1080 Ti apparently has up to 35% better performance than the stock 1080 but has not been compared to this or the FTW PCB cards yet. Personally since the price has gone down since the 1080 Ti's release. I would probably go with SLI Hybrid's over the 1080 Ti if you have the case room for the second radiator. Why I say this is because the optional Pro's of the Hybrid in my opinion seem like a better choice for enthusiasts that cant do a custom loop over the 1080 Ti.