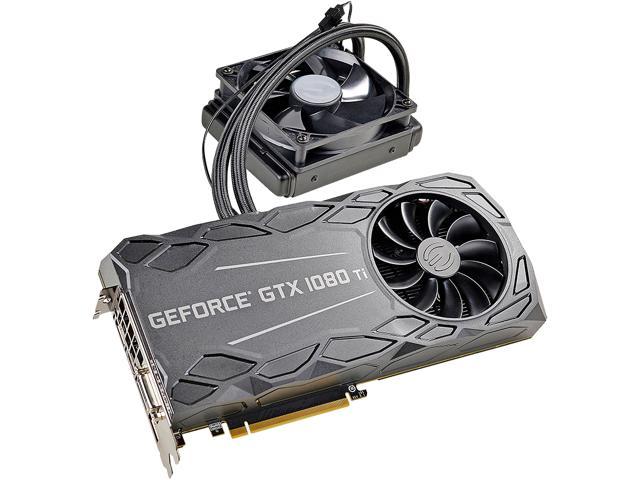 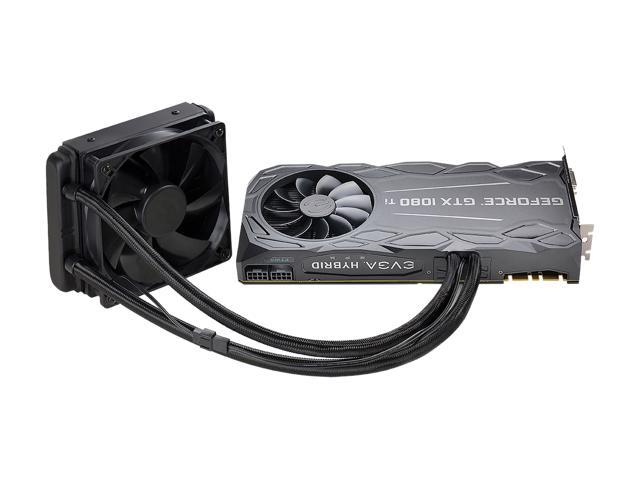 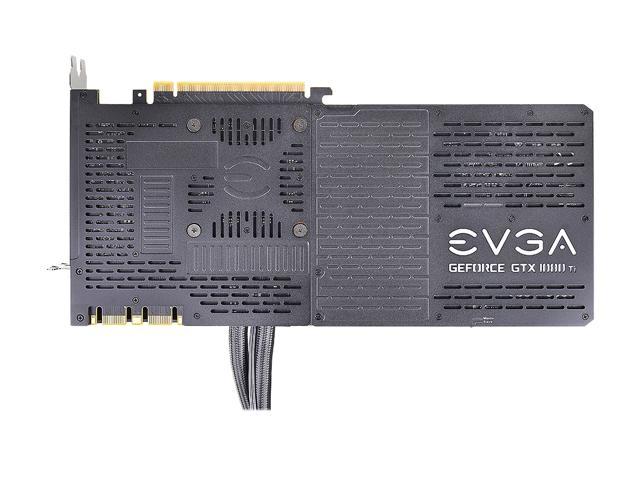 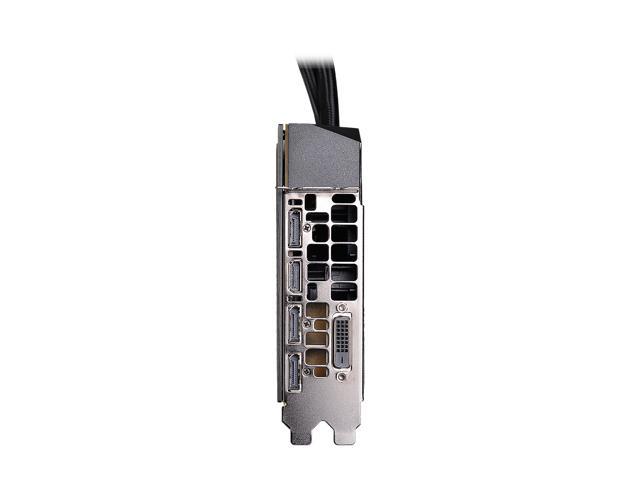 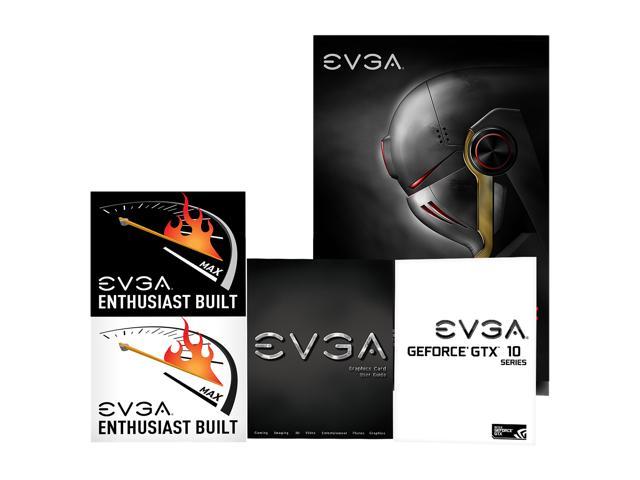 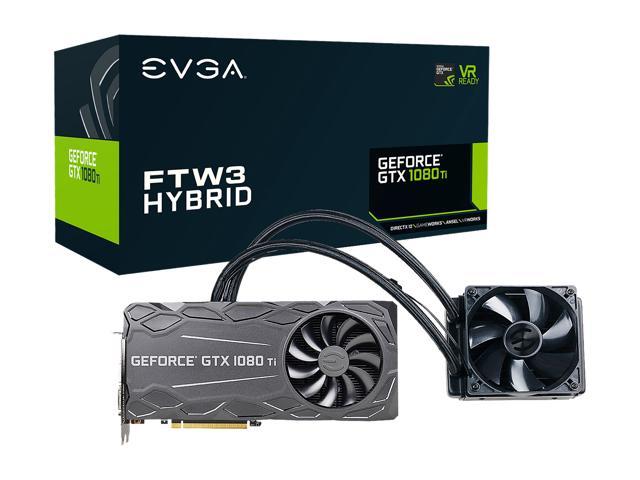 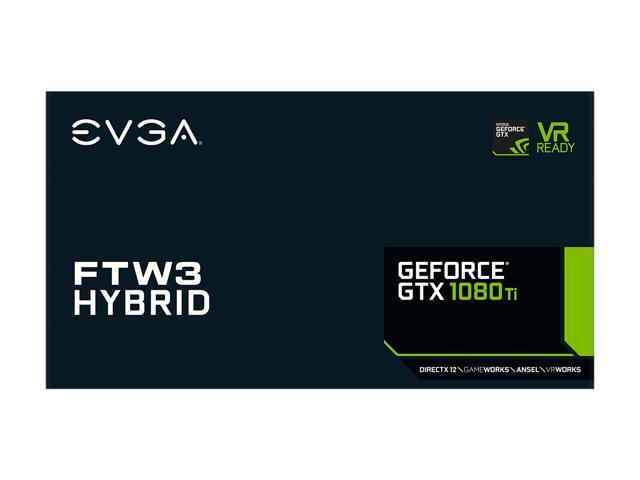 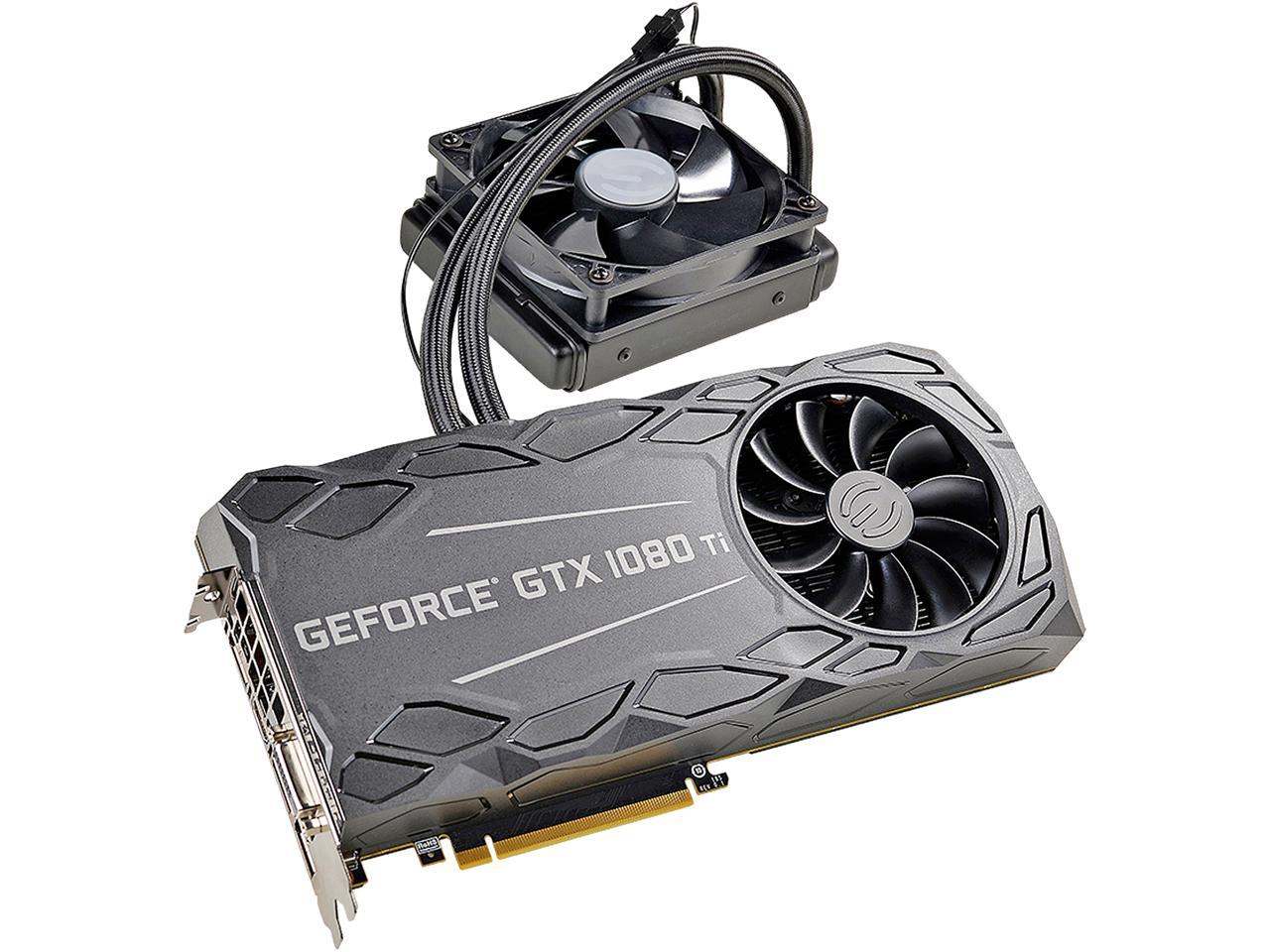 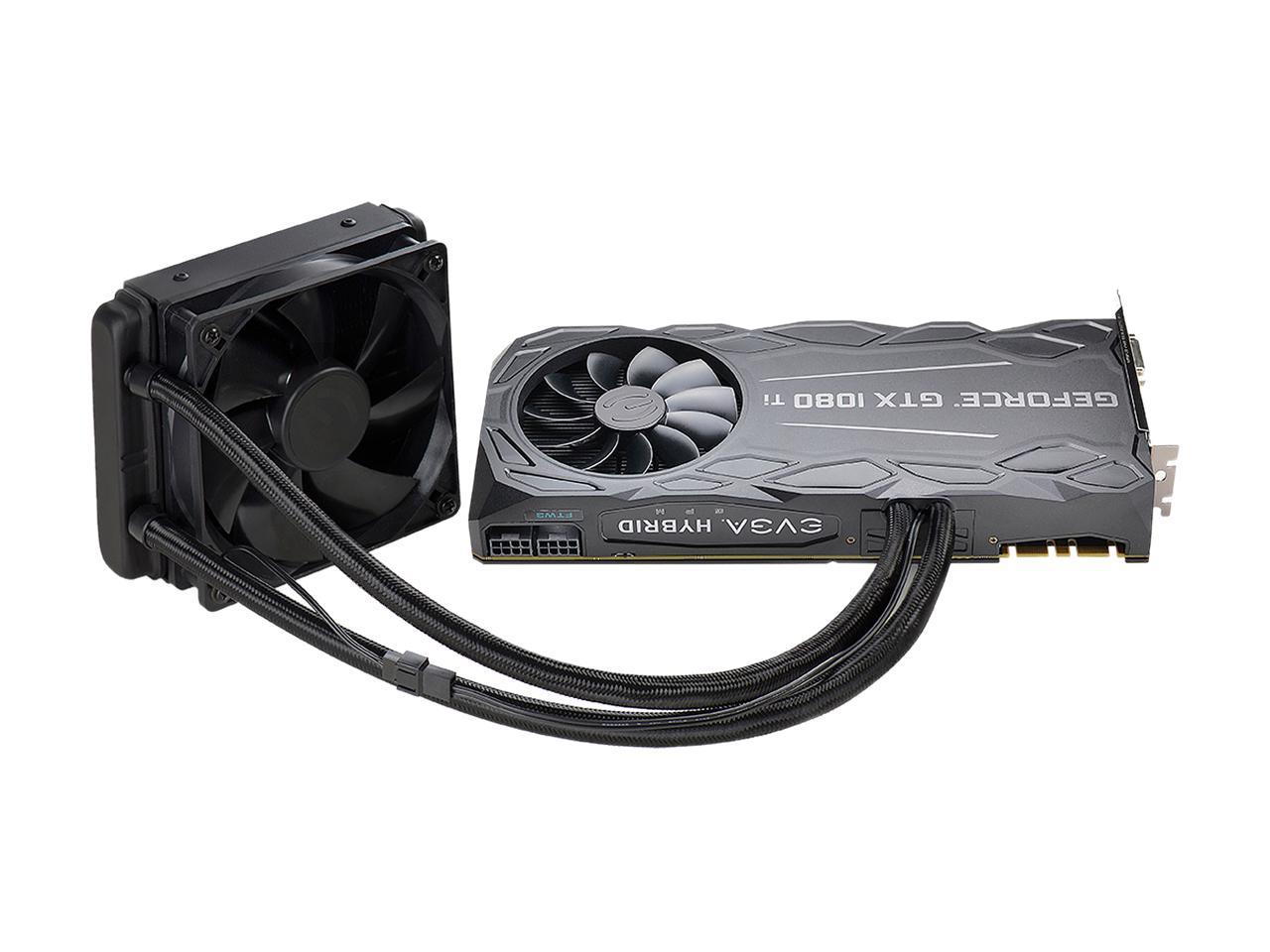 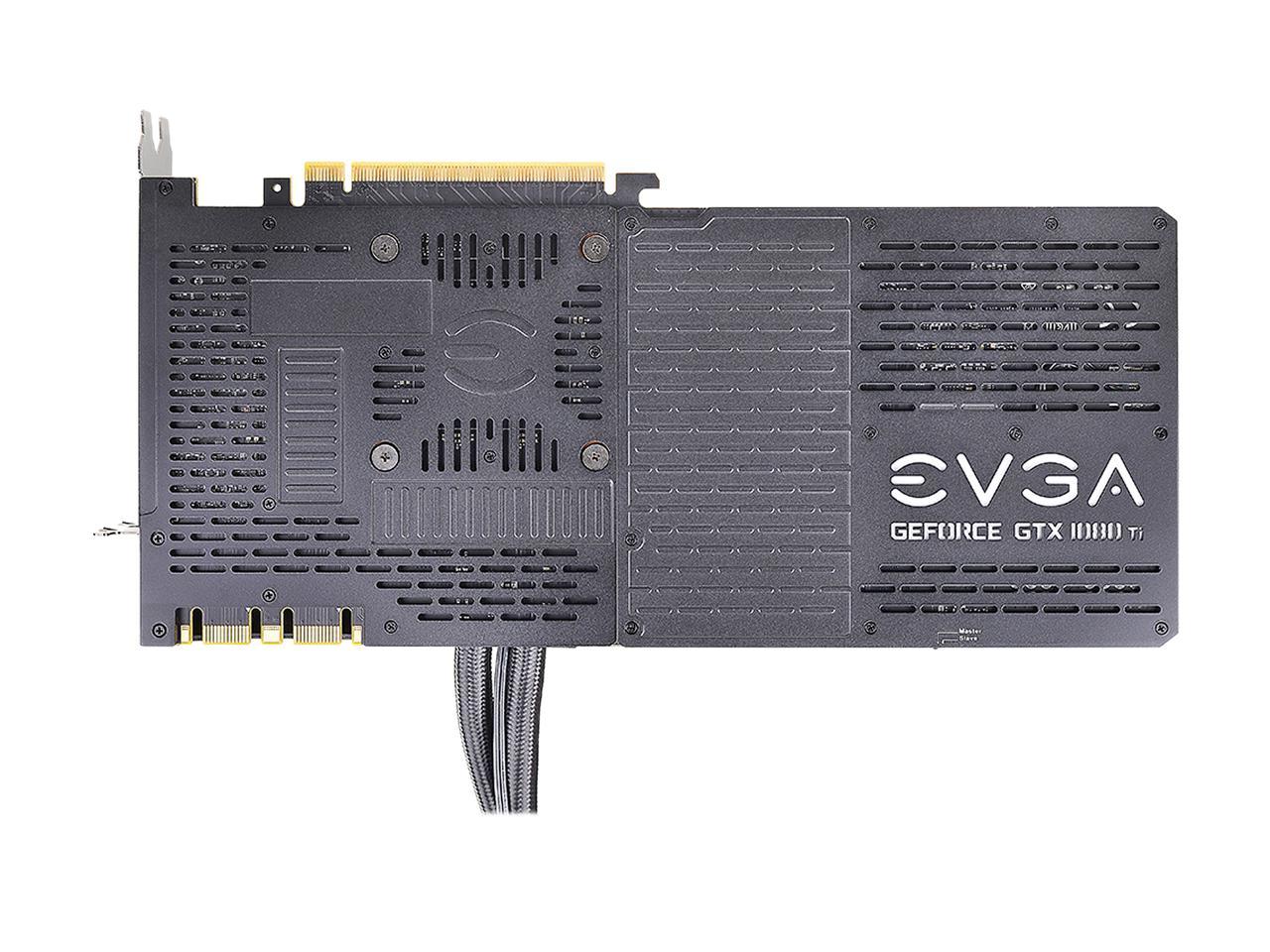 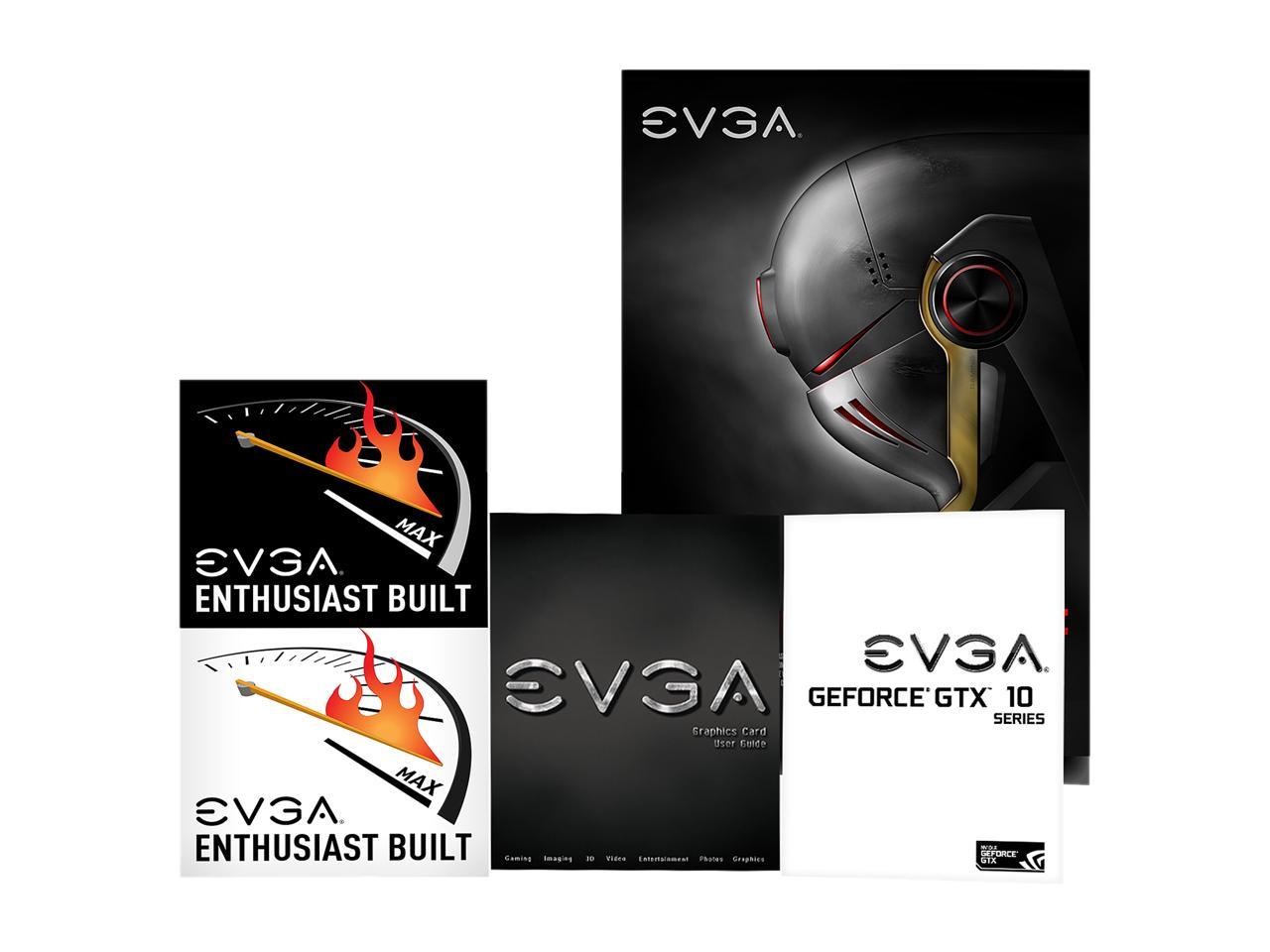 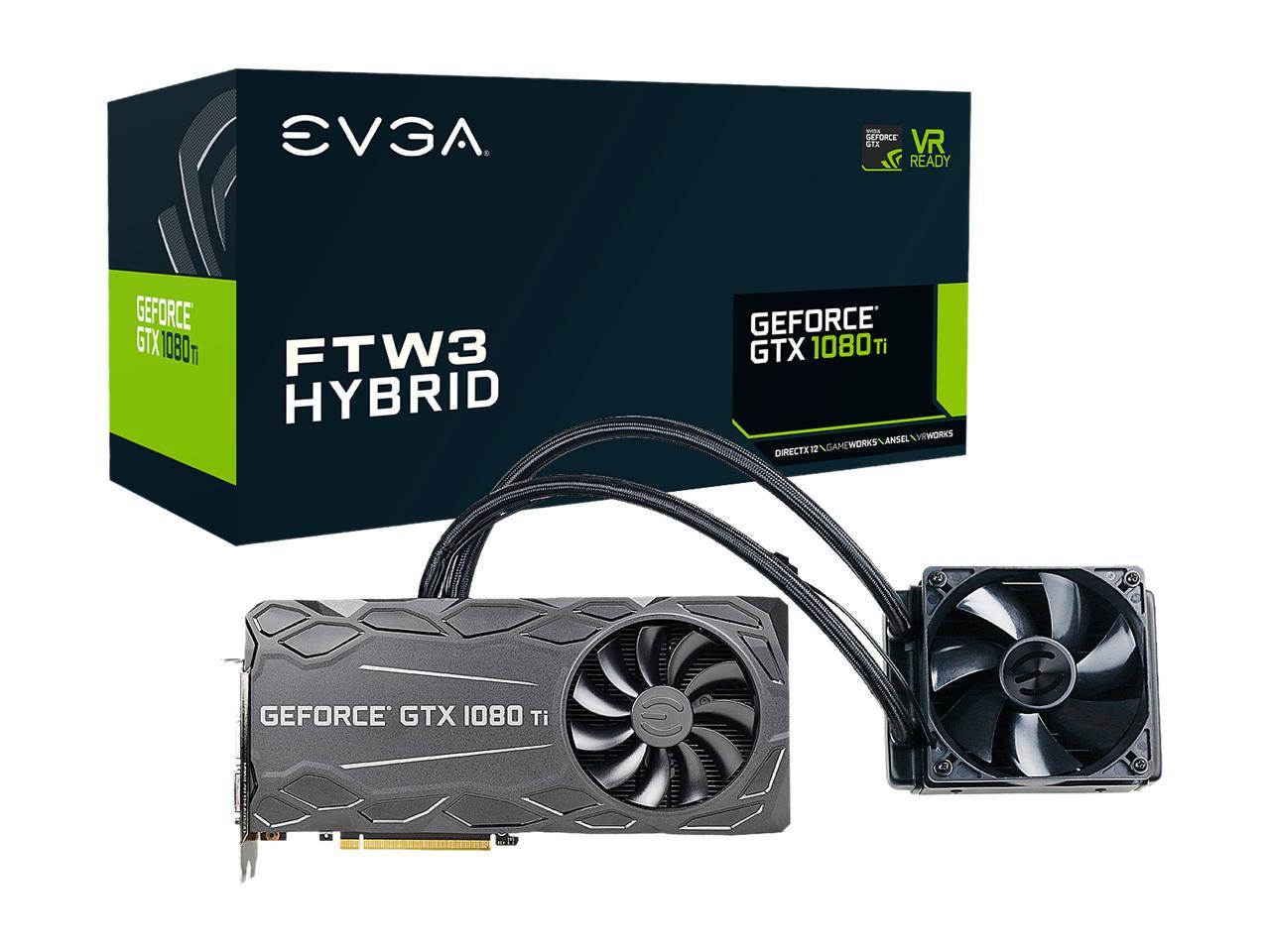 On top of that, we took our award-winning HYBRID solution and cranked it up a notch by including a dedicated memory cooling plate that makes direct contact with the cooling block. The VRM area of the card is covered by a dedicated heatsink/fan that keeps the power areas of the card cool, even during a long gaming session. Of course, the HYBRID water cooling solution gives you unbelievable GPU temperatures, sometimes cutting your GPU load temperatures in half! Best of all? The water cooler is completely self-contained, with an included 120mm radiator and fan, no filling, no custom tubing, and no maintenance. Just plug and play! All backed by EVGA's legendary Warranty. The choice is simple: EVGA HYBRID products are truly water-cooled perfection.

EVGA iCX Technology is not JUST a Cooler

It is a combination of new PCB, Thermal Modules, and Precision XOC.

WITH EVGA iCX TECHNOLOGY, A NEW ERA OF PC GAMING IS COMING!

Pros: Super high clock rates - way above advertised specs - 100% stable at 2088mhz Excellent cooling - at 2088mhz extended gaming sesh middle of summer it's at 55-56 degrees Extraordinary build quality - it's just really well built (compared to anything from Asus or Gigabyte it's light years ahead) High quality tubing GOOD fan - perhaps not the best but it doesn't need to be any better On that note - easily replaceable fan on radiator with connection point easily accessible EVGA software - I'm now a fan - it's on par with afterbuner for sure Great looks and lighting

Cons: Power cable location - same as most other cards out there but really wish they came off the end of the card vs the side. THAT SAID you can of course spend $30 and get the EVGA power link (worth every penny to me) to make the install look as clean as it gets.

Overall Review: Absolutely recommend this card, you get what you pay for. End of the day, are you going to miss a few extra dollars a few months from now? Yes, buy something else. No, buy this card. I could have purchased anything I wanted, including the KingPin if I wanted, but this is where I landed and I'm glad I did. Also to note, had TWO Gigabyte AORUS cards that eventually we figured out were incompatible with the ASUS Maximus VIII boards. They are garbage by comparison in build quality and overall appearance. Glad they were incompatible and that I ended up with EVGA. Can't see purchasing another brand of GPU anytime soon, if ever as long as the products they are producing are of this quality.

Pros: Worth every penny.

Cons: I still get my but kicked by all the teenagers, but now I at least give them a fight.

Cons: So far the only con is that I now have to upgrade my monitor and I can't find one I like.

Overall Review: The only real concern I have is if other player's realize how incredible the experience is with this card and upgrade to it... I will have lost my advantage at that point. I see things that were not there before - the detail is now utterly amazing. I upgraded to a new rig with EVGA Z270 FTW K motherboard, i7 7700K, and this GPU. The old one had 1366, i7 960 with 2 GTX 570 in SLI. Massive upgrade overall, but the graphics now absolutely blow me away. Next upgrade - looking for a 4k monitor with G-Sync... Did i say cool? Fast? Runs PUBG at 75 fps in ULTRA at 40 degrees. My monitor is 1980x1200. Totally insane graphics! BF4 is a snap. CSGO is so old... but the detail!! Easy to install. Plug and Play, with a few screws to twist in. Turn it on and install graphics drivers. BAM!! YOU'RE toast.

Pros: It's extremely powerful, quiet, and cool. This has to be the most power I've ever held in my hands. It also survived the gauntlet that is Canada Post so I'm impressed. I'm very happy with it, regardless of the price. I don't see the cost of this card as a downside because it has a ridiculously high thrust to weight ratio.

Cons: Not sure what kind of LOX this takes as it isn't listed in the manual.

Overall Review: I highly recommend this card to anyone, as I believe it to be one of the best 1080ti cards there is. EVGA has never let me down.

Pros: The build is extremely solid and it was very easy to install; Just make sure you have enough room in your case for the radiator. The included Velcro straps are nice for keeping the tubing and fan cable together. My card is extremely silent. The loudest part of my system when this card hits full load is my PSU fan. I have a Corsair HX750W so I'm not sure if a 1000W would have less fan noise at the same power draw or a different brand would just have less fan noise. Either way the card is extremely silent and efficient. The FTW might seem like a bit of overkill compared to the SC but I like the peace of mind with all the temperature sensors and the extra power phases for reliable power delivery for overclocking. I mostly game on a 34" ultra wide G-sync monitor and it is buttery smooth. I've also used this card directly attached to a 4k TV and it works well on that as well. Great card overall.

Cons: The color of the FTW3 on the side can't be changed or turned off. RGB isn't a big selling point for me when it comes to hardware but it would be nice to be able change the color of all of the lights or at least turn them off.

Overall Review: As a matter of preference the card aesthetics are okay. The color at least makes it fit in with most builds where you won't see the underside of the card. You have to use EVGA Precision X OC to control your RGBs and see the temperature sensors but it works better than other graphics cards interfaces I've used in the past.

Pros: - 1950Mhz out of the box - have had no need to overclock as games pretty stable at 60hz and 4K. - upgraded from SLI 980Ti's and it's a considerable improvement that did surprise me! - cooling is impressive 35c Ambient = 55C GPU with Noctua Industrial fans in push pull at 1000rpm = Pure Silence stress testing for 2 hours. VRM cooling is also excellent due to design - EVGA support and Warrenty is the best. I have absolute confidence in the rare event I need to use it. - I had some audible pump noise on startup, but it disappeared almost immediately. I can only hear the pump now if I put my ear against the card with the side of the case off! - 5 eggs for product but minus one for newegg (see cons)

Cons: - Standard fan is a bit budget for my taste. Only 3pin as well. For a top of the line card that's a bit of a shame. - 120mm radiator is technically insufficient. Why cannot someone make a hybrid with a 240mm?! - Minus one egg (being generous) due to Newegg. This was shipped to Australia priority egg saver and it arrived in 5 business days which I think is excellent. But upon opening it only had two very small air inflated bags for packaging support. The inner GPU box was crushed on one side slightly even though the outer box was ok. Reason being it would have been sliding round loose inside with insufficient support. If you're offering to ship electronic items worth over $1000+ (or any value really) half way round the world PLEASE spend another 10cents and put in more packaging support! Credit to FEDEX who were very helpful and made notes, and were willing to submit a shipping damage claim if necessary. However after FedEx instructed to open the inner box the card itself was undamaged (EVGA packaging is excellent). Over the event still made me a bit nervous due to Neweggs fine print policy on shipping damage.

Overall Review: This card was not available in Australia and it actually worked out much cheaper and better value for money. SC hybrids were $1350 Aus compared to this at $1240 (inclusive of taxes & shipping). A much better card twin bios, cooling and non reference PCB. The risk was worth the reward I believe.

Pros: This card is really fast and completely silent. I haven't had any of the pump noise some people have complained about. I keep the radiator fan low and the card peaks at maybe 50C when playing games on max settings. I'm still running the card on stock settings because I haven't found a need for more power from it. That being said, though, this card is meant for someone who wants to overclock and get as much power as they can from the card without having to invest in custom water cooling loop.

Overall Review: I wasn't sure when shopping for a new GPU whether to just stick with an air-cooled card, or go for this hybrid. The price for this card was hard to stomach when you could save $200 and buy the air-cooled equivalent. Eventually I decided the price was worth it for the longevity of this card and the silence I'll get from it during that time. Even when software starts to push the limits of this card, I know that I can make use of the cooling system to OC the card and that through overclocking the card will continue to stay relevant, cool, and quiet longer than its air-cooled equivalent.

Pros: -Out of box clocking 1964mhz -Doesn't go above °55C while gaming -Unlike others who said they have a "pump noise" or a fan noise, I have neither. -Fit in my small Themaltake mini ATX cube on a B350-M motherboard -CRUSHING games (as expected with any TI)

Cons: -Radiator fan that is included is very cheap for this expensive of a card.

Overall Review: I am running a push pull top mount setup with a 120mm Noctua to get those temperatures.