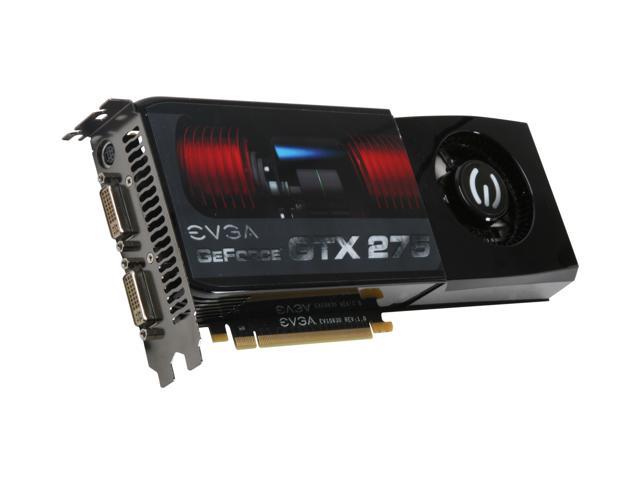 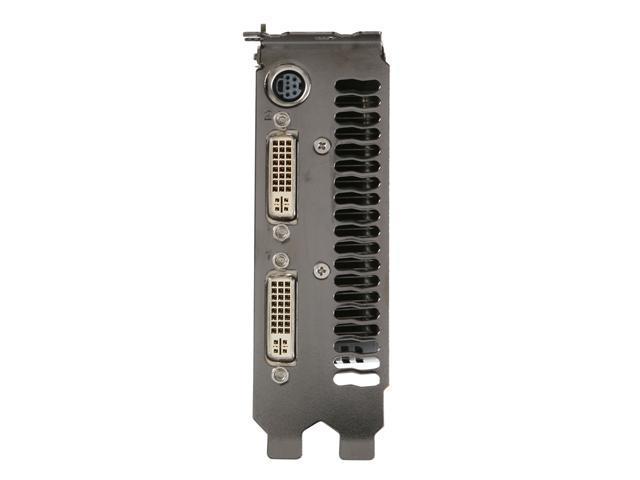 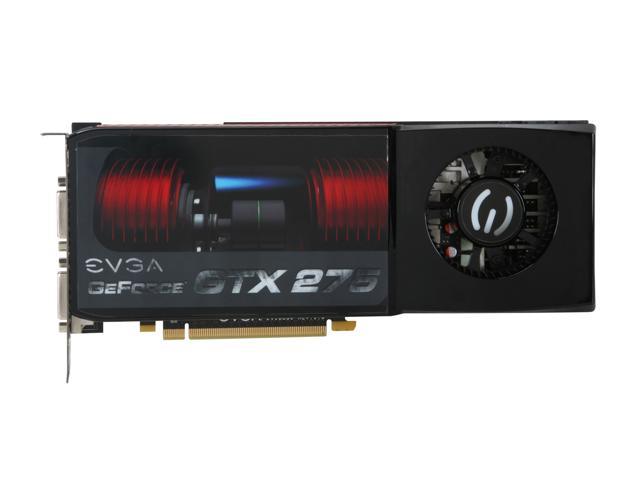 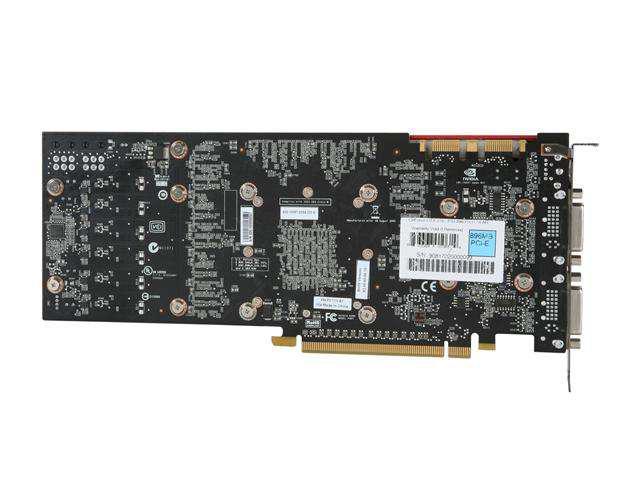 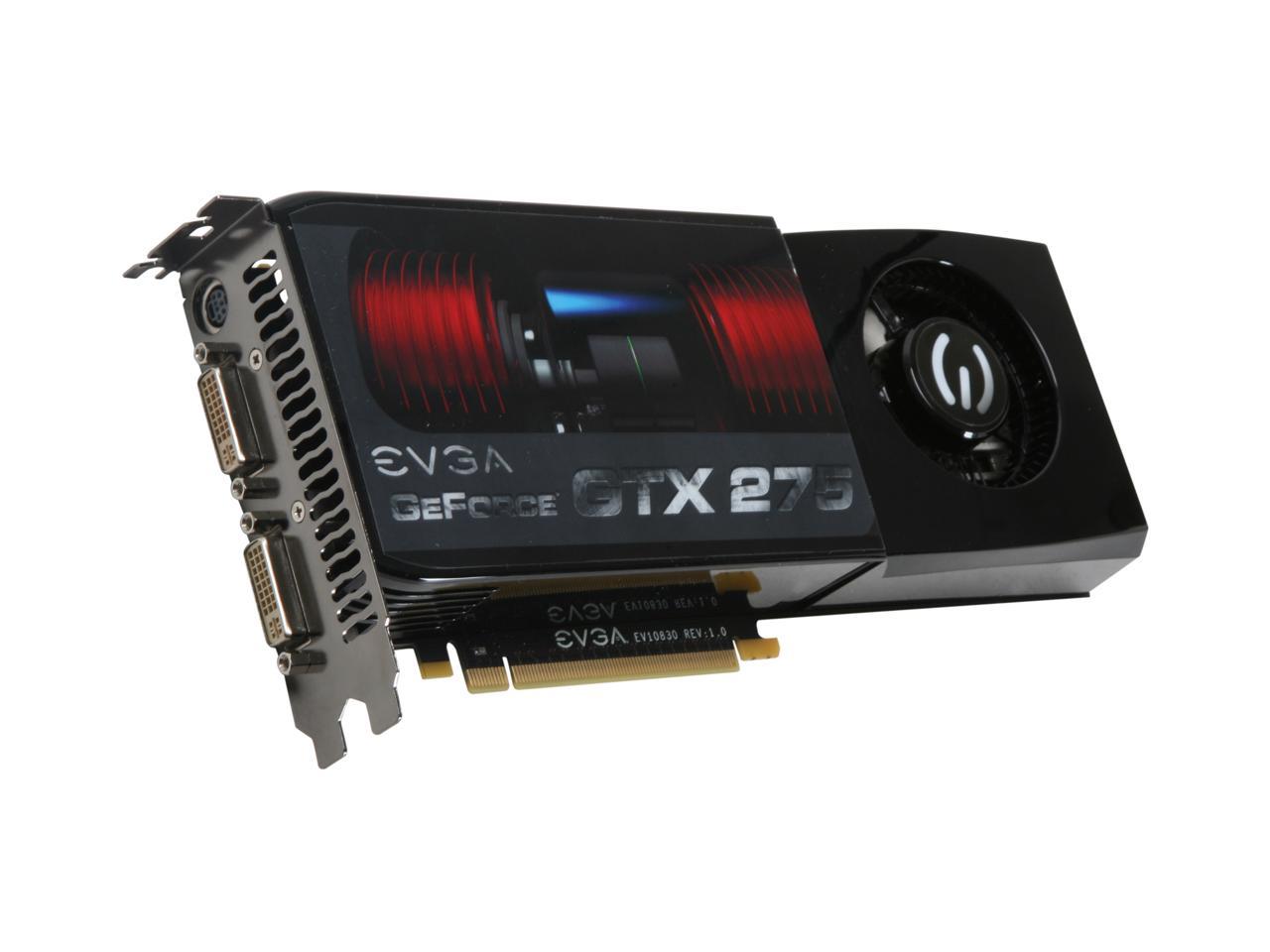 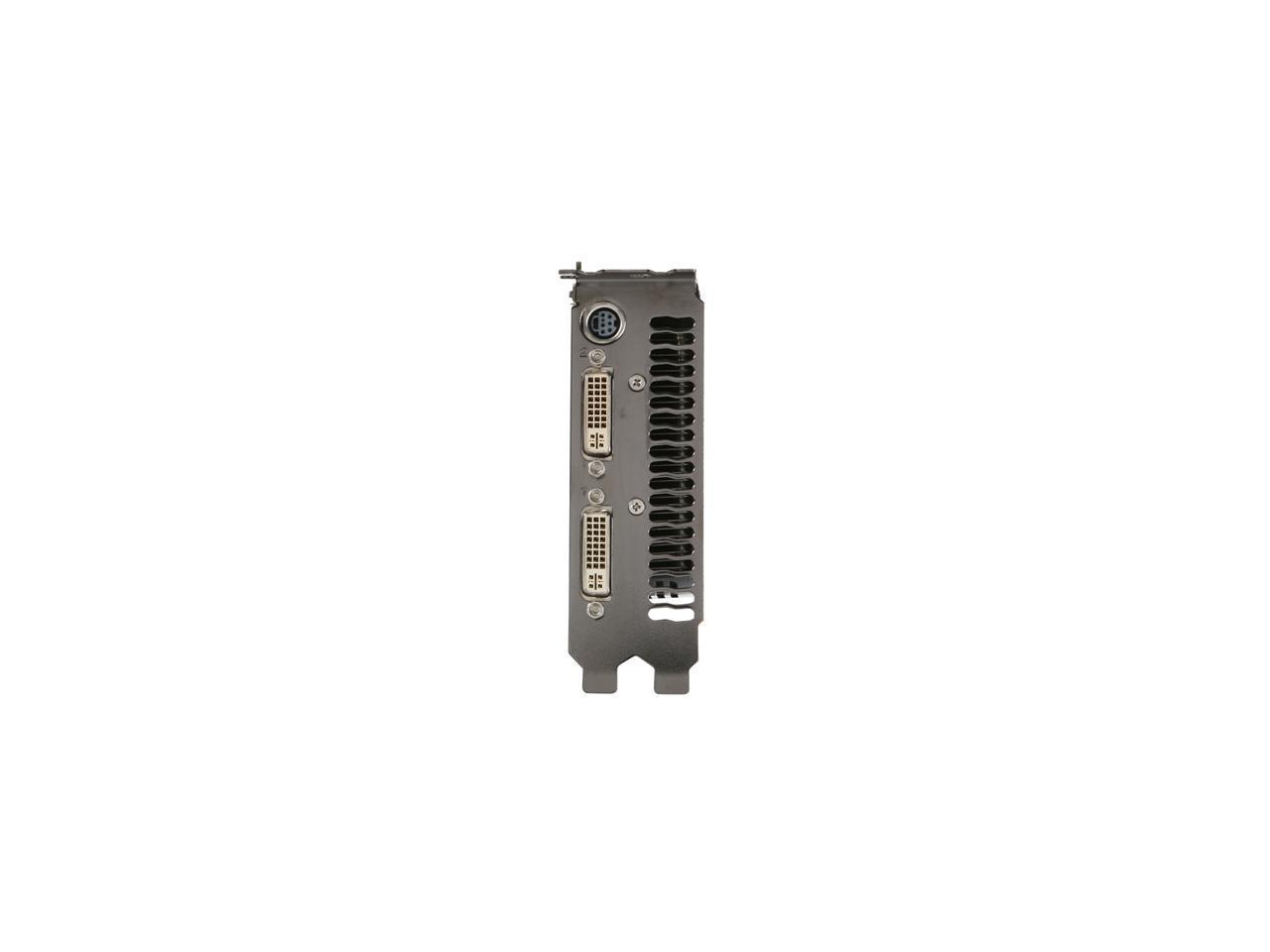 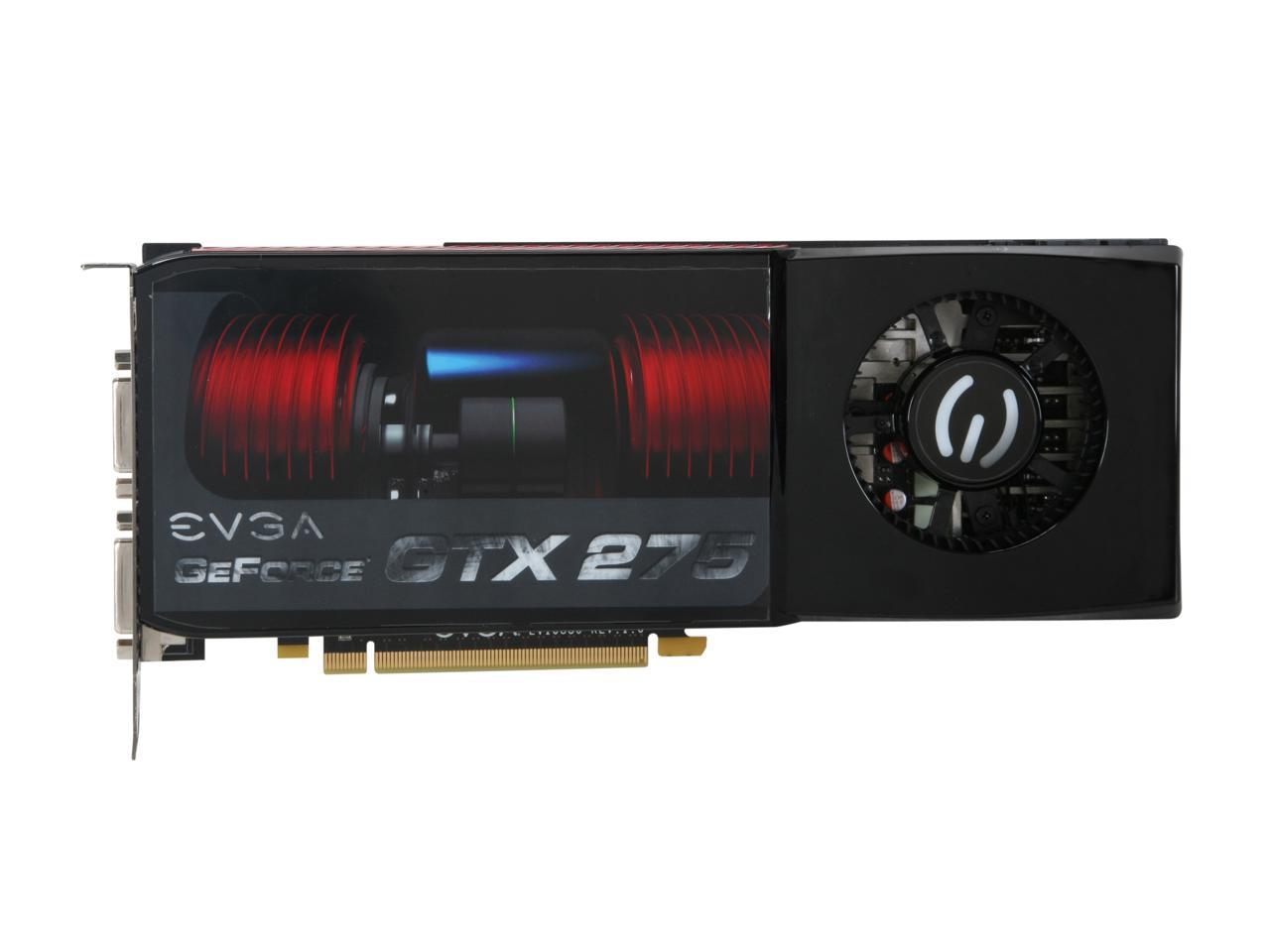 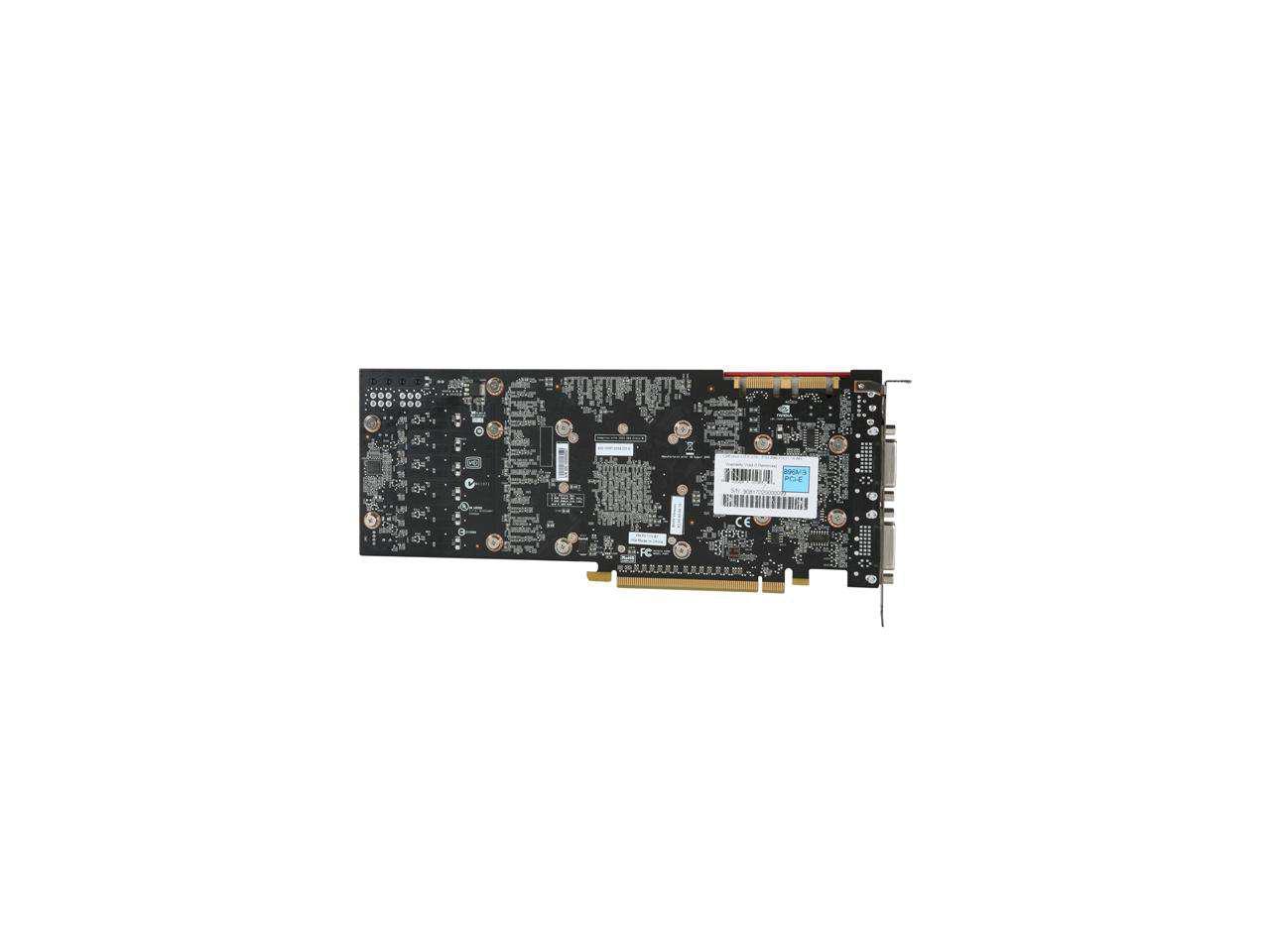 (271) Write a Review
OUT OF STOCK.
Specs
Reviews

Pros: This was an upgrade from 2x 8800GT's in SLI. Threw this in there, , got better performance with the stock clocks than with my old ones OC'd. Never had an EVGA before, but I will probably stick with them from now on, if only for the EVGA Precision software. Makes OC and card control really easy. Right now I have the card OC'd to 720MHz core, 1160 memory. It seems perfectly stable (ran several benchmarks and looped crysis benchmarks for a while) and I could probably go higher. At those clocks, I run the fan at 100% (noisy but I can't hear it when gaming anyway) and, even after a while, it only got to 67C. In Call of Duty 4, with alll settings maxed at 1680x1050, it gets a constant 60fps (the v-sync rate). In the crysis GPU benchmark, at 1440x900 with 8x MSAA and everything very high except shadows and shaders (which are high) the FPS averages about 40. All in all, an excellent card, great deal, and probably the best OCing GPU I have encountered.

Cons: The thing totally said "informatino, software, and case stickers" or something like that, BUT THERE WERE NO CASE STICKERS!. I really wanted one, too. Got no complaints about the card though. Some people mention length, but its standard length for a preformance card (and no issue in a Full Tower anyway).

Pros: This card handles everything I toss at it. Everything at maxed settings, AA and AF at 1920x1080 w/ awesome framerates. Currently overclocked to 686 core, 1521 shader and 2476 memory (can go higher but decided to keep things modest). Chose this over the 4890 since you get PhysX and CUDA (Badaboom is incredible) out of the deal.

Pros: I had been contemplating a video card upgrade for about four months. I was running a BFG 8800 GTS 512 (G92) and was still very pleased with it's performance even in today's software. It was a tough call to upgrade only made easier by the option of using the 8800 in a budget system I built for my father.... so I did some research and pulled the trigger on this GTX 275. My System: Core2Quad Q6600 @3.2 GHz / 8 GB GSkill 1066@1066 Following are comparison benchmarks: 3DMark Vantage 8800 GTS: P7758 3DMark Vantage GTX 275: P13952 Far Cry 2 runs almost twice as fast. I had the benchmark numbers for both but forgot to back them up when I just did a clean format... doh! Sorry. In any case the Vantage results show the Pro's of this card since the days of cheating via drivers are long gone. As a baseline test comparison it's totally valid. I can also actually play Fallout 3 with AF as well as AA (tested 8x, didn't test any higher). It runs like butter at 1680x1050 (my monitor's n

Cons: I just ate a bunch of Triscuit crackers topped with Jalapeno's and Pepperjack cheese and my mouth is on FIRE. Oh... and rebates are a marketing scam that companies only offer to snag consumers into a purchase with the statistical expectation that the majority will forget to send them in, so DON'T FORGET.

Overall Review: Excellent mid to high end performance and a perfect card for the average user (I'm more than average but don't feel a need for a 30" monitor) using common LCD's with native resolutions of 1680x1050 and 1920x1200. My card runs relatively cool and doesn't get insanely hot. I increased the fan speed with Riva_tuner from the default of 40% to 55% and it is not loud by any means in my Antec 900. I am much happier with this card than I expected to be and wouldn't hesitate to recommend that you pick this bad boy up. Do it now. :)

Pros: Great card that can run any games on highest. It was bigger than I first expected, but fit snugly in my P182. I'm convinced that my GPU folds more than my i7 at 100% usage, although I need to test it a bit more throughly. Has great overclocking ability with some very easy tools. Quiet and low profile fan too. EVGA is an awesome company and I must say that I've turned into a bit of a fanboy when it comes to their products now.

Cons: Runs at around 80C under full stress (40% fan). This is pretty good for graphics cards in general, but I'd prefer cooler!

Overall Review: First 275 available on Newegg, and I couldn't be happier with EVGA.

Pros: Great performance, not loud. Another great product by EVGA.

Overall Review: This thing is a monster, if your house ever gets robbed and you have no weapon on hand pull this thing from your case to defend yourself with. One good hit to the head and the person will most likely be dead.

Pros: This thing is a monster! Runs great on Windows 7 x64 RC, playing COD4 with 200+ fps. I have bought EVGA cards for years now, and I am continually impressed. Very beautiful card and it's a shame that I have to mount it face down. The fan is crazy powerful.

Cons: Only one. The fan would not go past 40% for some reason which put the temp up to 85°C in-game. Easily fixed by using custom fan profiles with a utility that I apparently can't list here.

Pros: This card was a replacement of my HD3870. I have been a long time ATI consumer and have finally become sick of their garbage cards and software that have issues with just about every game I play. The GTX 275 was easy to install (my cab still has 4" of space with this card but its a big one) and the drivers and software were painless. I also purchased the ASUS 25.5" wide screen monitor and I was completely floored. At 19200X1200 this video card makes my games come alive. I felt this was the best bang for the buck against the three other higher cards.

Cons: Not being free is the only con I have right now.

Pros: Great price considering what you get, got a mail-in-rebate with mine and they got me my money in less than 3 weeks. That's blazin fast compared to some companies. Crazy-stable too, so much potential for overclocking. Buy the standard clocked version and save $50 cause they give you a program that any monkey could operate. I've got mine at 713core/1520shader/1260mem and it hasn't crashed once or gotten over 70deg, and thats with the fan at 55%. With 2 or 3 of these and waterblocks, who knows how fast they could go.

Cons: Don't use the toolless clips on your case. They may look and feel sturdy, but you don't want to risk such a heavy card with little pieces of plastic. You should have a billion screws lyin around anyway, right?

Overall Review: EVGA customer service is unprecedented. I called at 4:30 pacific time, and I got a human on the phone who actually knew what he was talking about. My question was pretty dumb in retrospect, but he helped me through it wonderfully. I'll keep buying EVGA if it means I can talk to a human being when stuff hits the fan. The Step-up program is pretty cool too, though I haven't used it yet.