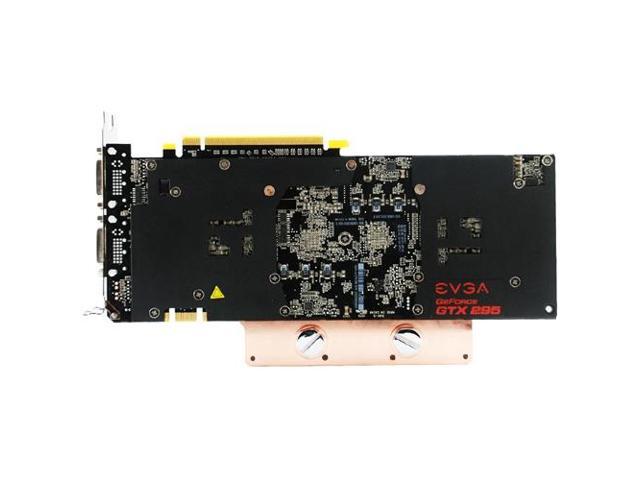 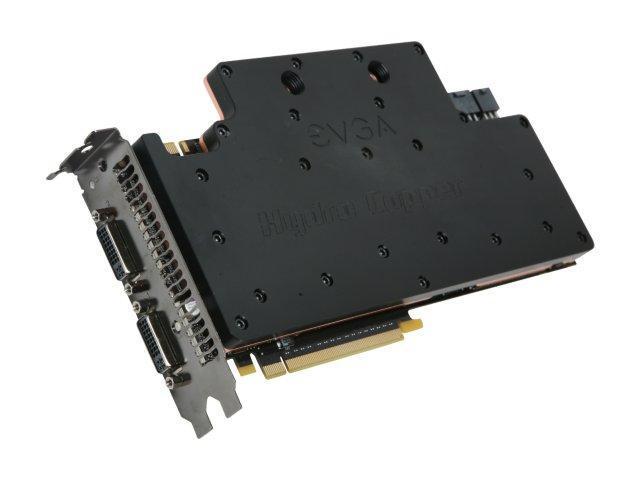 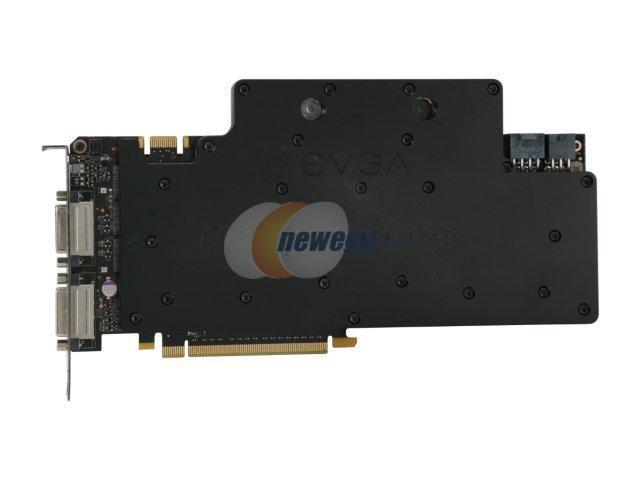 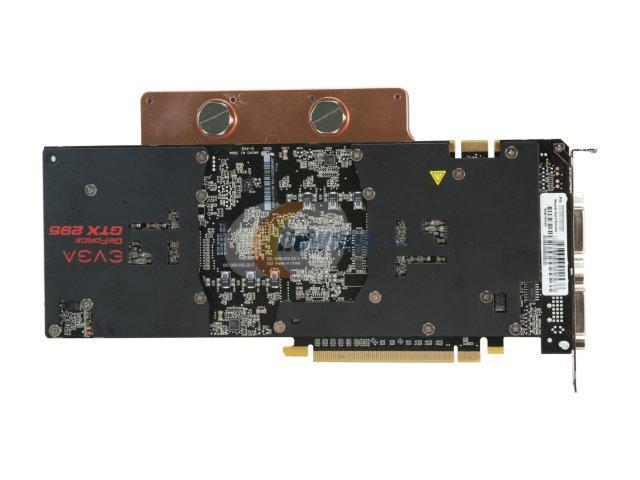 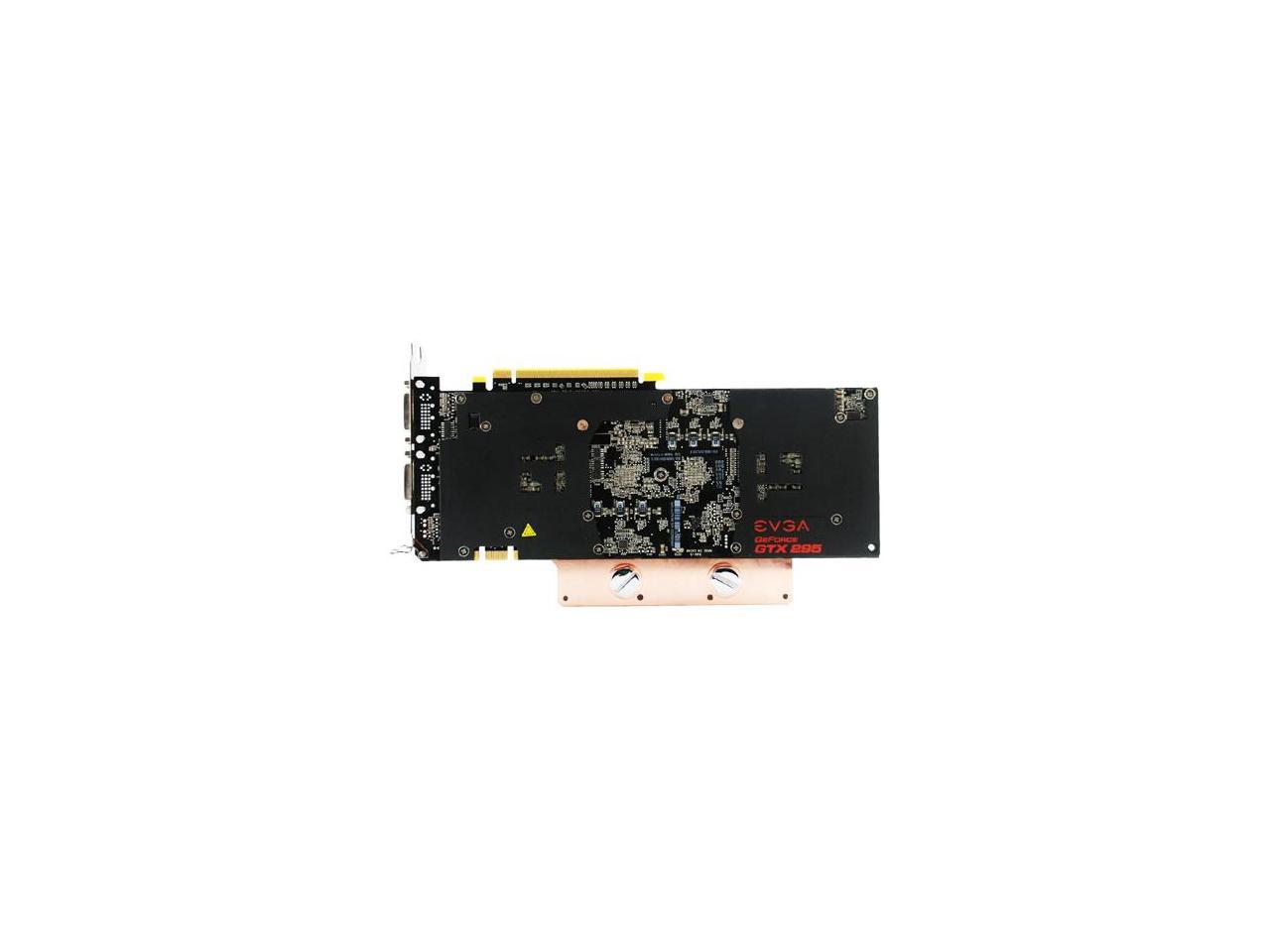 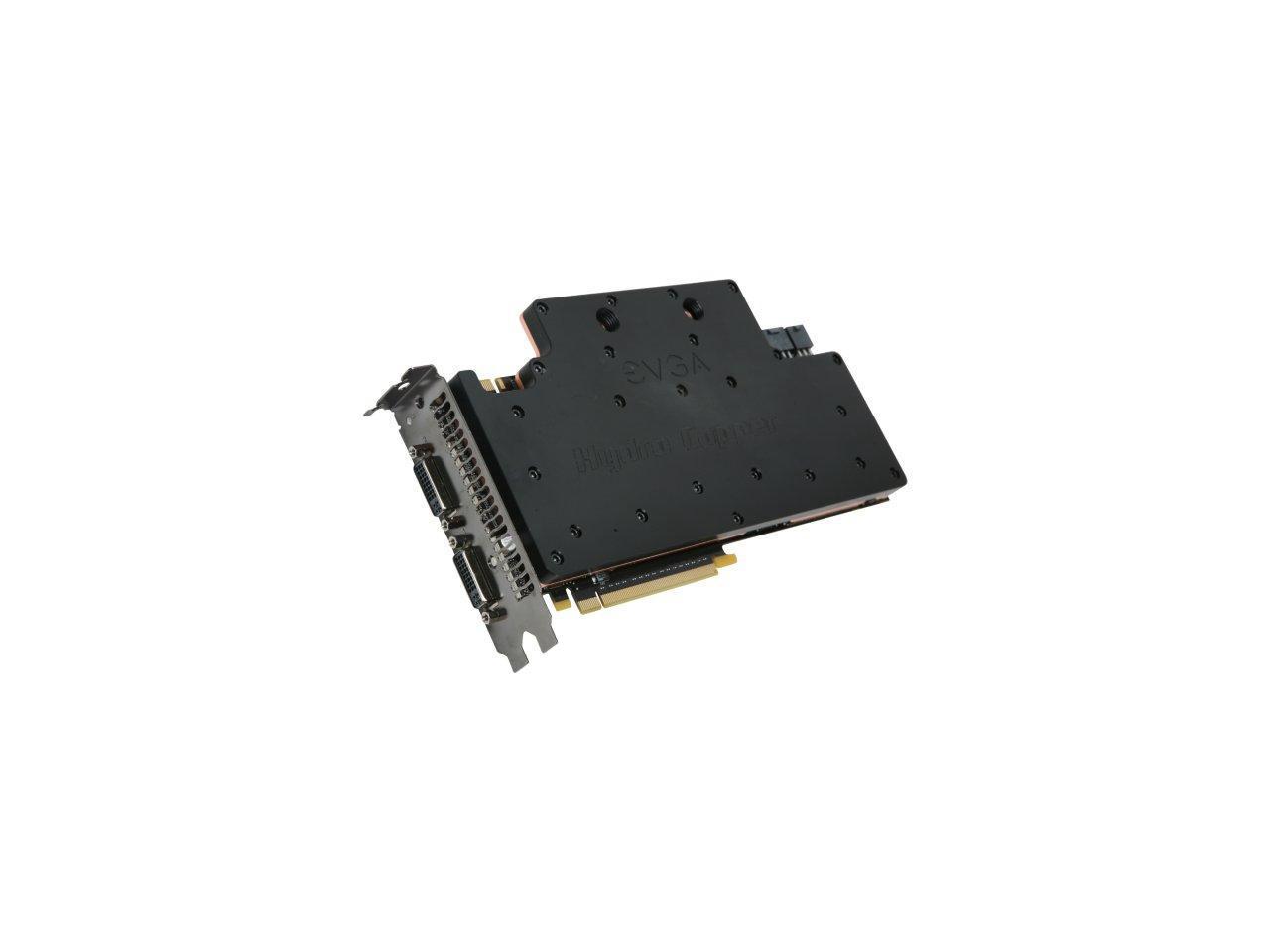 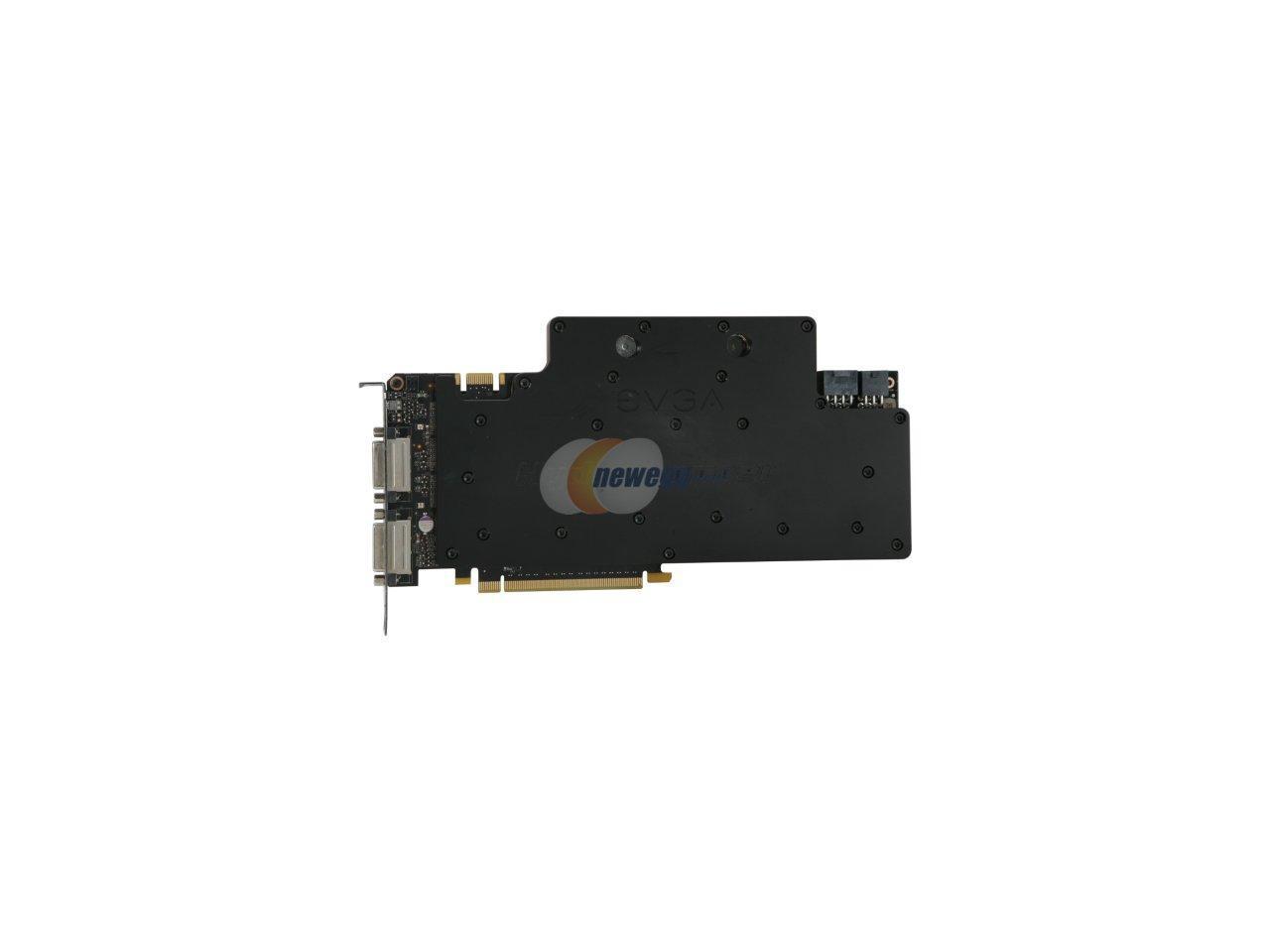 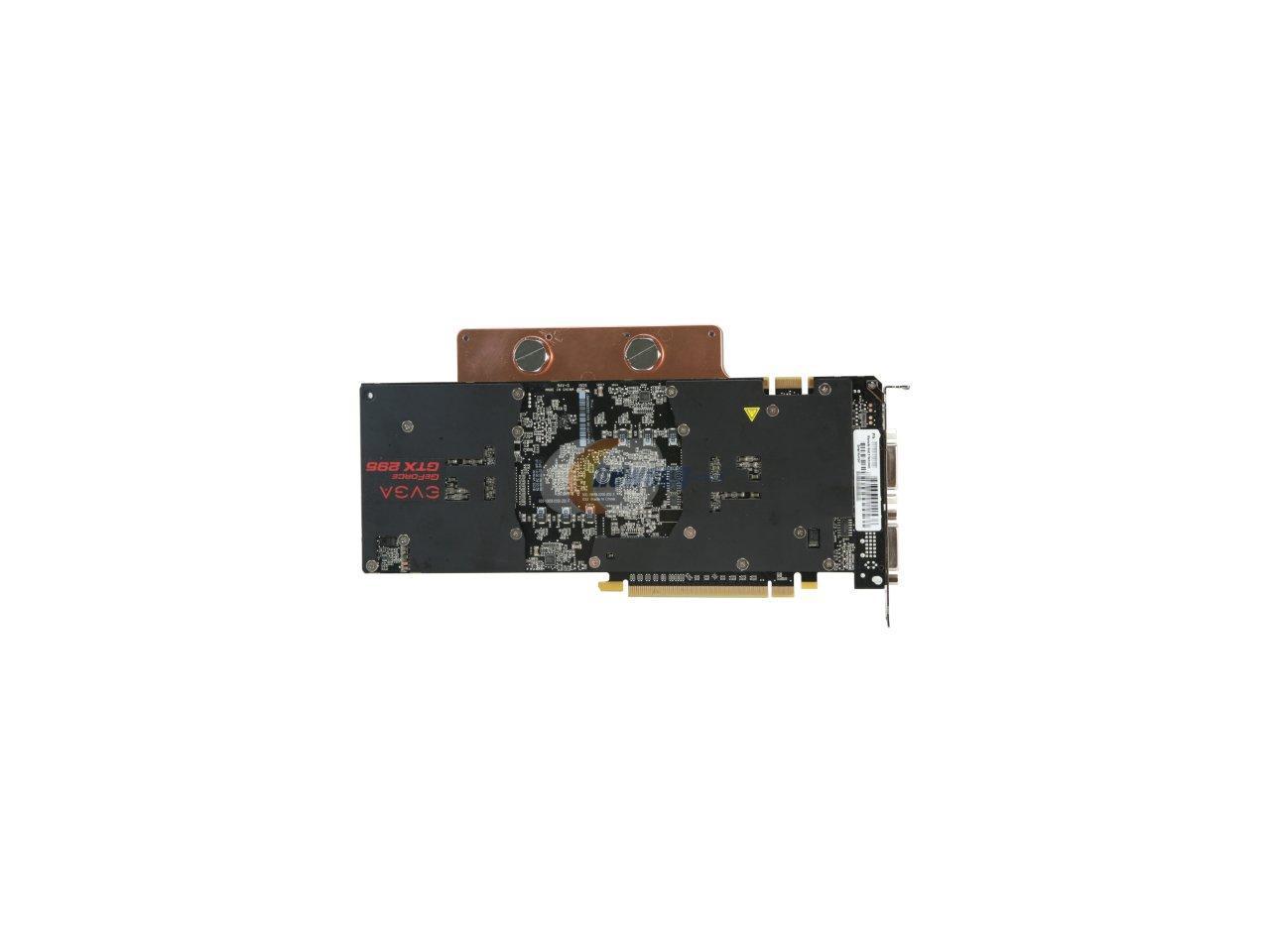 Pros: Very high frame rates, if it does not fail due to very poor assembly quality. Great graphics quality.

Cons: Complete failure to correctly install waterblock. Loose screws. Thermal compound only covering a small part of GPU surface. Very poor quality barbs & plastic clamps provided. Water block is really clunky just plain ugly. Customer service was poor! Wanted pictures sent to them. I demanded a replacement, 5 days later still not shipped, I told em "Don't bother" & purchased a high quality waterblock to rebuild the card. EVGA would have been better off not to offer a water cooled option with such poor quality followed-up with resistance & poor customer service when the customer refuses to be jerked around.

Overall Review: Dont waste your money as I did, I recommend buying an air cooled version & seperate waterblock from another manufacturer. Dont believe EVGA repling to other reviews, it appears to be lip service only, my experence was very dissatisfing, frankly I feel ripped off for the price of the water block! Shame on you EVGA!

Manufacturer Response:
Hello, Thank you for the feedback. I apologize for the issues you are experiencing with our product. We stand behind out products and would like to support you with the issues you are having. Please email the serial number of your product so that I can further assist you. My email address is ksabine@evga.com. Thank you, Kyle Sabine
Anonymous
Ownership: 1 day to 1 week
Verified Owner
poor quality control7/10/2009 10:10:55 AM

Pros: EVGA warranty with cross shipping is reason I buy evga...though you are sent a rebuilt used card...it is still a great deal if your card is used, but a bad deal if your new card is defective. So rma'ing to newegg, as I should be able to start with a new working card.

Cons: I bought a pre-assembled waterblock assuming it would be correctly assembled and tested, and no chance of finger pointing if card was defective....so much for that.. I install the card and temps are 90-100C. I contact EVGA and they say some cards were sent without tightening screws. All screws on one side were tight except one that did not tighten, it was obviously stripped, and one screw missing ? fell out, or ? after they stripped one they thought screw it and left? All screws on other side were very loose. I tightened the screws that I could, and temps came down to 50s but later that day shot back up to 90's quickly on one of gpus. What angers me is the employee at evga who assembled the WB clearly knew he stripped the threads, but sent the block on anyways, probably hoping the end customer would get blamed for it. I own a business myself with 70 employees, sometimes they disappoint...hard to blame the company...but it's ridiculous nonetheless.

Overall Review: DO NOT BUY THIS PRODUCT PREASSEMBLED. EVGA is fine, but buy the wb and card separately, then assemble yourself. Also not sure if the evga WB design is defective or not, as the thick pads on vrm etc, seem to prevent good contact with gpus. So perhaps buy a different brand WB, but I will reserve final judgement until I get a new one. I was a "victim" of employee assembly line mentality, ie its not my block, stripped screw, loose screws, sloppy job...who cares, I just want to get done, it is not going in my computer... Buy the components separately and do it yourself, you are the only one who cares about your own components, and evga obviously can not control their quality.

Manufacturer Response:
Hi, We identified a very small number of cards that are affected by this. We have already corrected it, and I would like to offer you a replacement card shipped to you, can you please contact me directly at jacobf@evga.com so we can correct this immediately. Thanks, Jacob
Jesse L.
Ownership: 1 day to 1 week
Verified Owner
Best manufacturer, hands down!8/10/2009 8:43:04 PM

Pros: Great build, great waterblock, great everything! I've been a fan of EVGA for only a couple of years (I used to use ASUS, but after the Striker Extreme debacle of a couple of years ago...), and yet I'm extremely impressed with their products and customer support (I've only need to call them twice!). This card is blisteringly fast! SLI in one card! Quad SLI with two cards! What more can I say?

Cons: I always check my hardware when I get it (number one to make sure that it didn't get damaged in shipment, number two to show off my new kit to my co-workers!), and noticed that one of my cards didn't come with 1/2" barbs. I immediately contacted EVGA and they got me squared right away! As always, top notch service!

Overall Review: The only other thing that most people might not think about when ordering this card is just how heavy they are. They weigh approx. 3.5 lbs and that is probably just a tad conservative. This isn't really a problem, you should just know that if you plan on running anything above them, just make sure that it doesn't rest on the card.

Cons: Heavy. This thing weighs 10lbs! It's a LONG card. Barely left me with room for my double rad with fans inside my HAF932. No more Call of Duty. Cost but it is is a warrantied hydro card. What else do you need? Addictive... I am getting a second one with a 9800GTX for PhysX later.

Overall Review: Didn't have my DVI-to-HDMI adapter or SPDIF cable but EVGA is sending them. I read the reviews before I bought this and when it came I just tightened every screw possible on it just in case and haven't had any issues. i7 920 @4.312Ghz 6GB Dominator RAM 1600 Rampage II Extreme MOBO

Pros: WOW. The egg ships this bad boys sans box and is strapped down with 4 cable ties each an inch thick. Weighs a ton probably as much as your motherboard with CPU, heatsink and memory installed. Gorgeous piece of hardware that oozes with quality. Pure copper heat sink runs at 40 C on an exos 2 in series with a CPU at stock speeds with the exos at the lowest settings under load.

Cons: Doesn't 800 bucks buy you an instruction manual? Any experienced should know his way around this product but it would be nice to know if the flow is directional or not (its not). The price is high but the same if you bought the components separately and this way you get to keep your warranty. Oh yeah and it will give you a hernia.

Overall Review: If you are wondering way a single slot card has a double bracket its because its so heavy you need the extra reinforcement.

Pros: its the best card out there and with a water block pre-installed, you can't ask for more

Cons: something wrong with the card when multi gpu enabled. price.

Overall Review: EVGA is taking their time with the advance rma. i hope to get a good replacement the first round, ive read a lot of reviews where the rma cycle went up to 4x before they got a good card.

Pros: So far I'm able to max all my games without the slightest hiccup (except Arma 2 which needs patches). This includes LOTRO, L4D, and Fallout 3 - haven't tried Crysis yet but my FPS is soaring in all those games

Cons: I was a bit dissapointed that right after I ordered this card they decided to add the Call of Duty game for free. Also the card is idling around 93-95 degrees which seems hot, when I run arma 2 it got up to 135 degrees! But I placed a spot cool fan on top of the card and now it maxes out at 109... still seems like it shouldn't be that hot. I'd recommend a fan blowing across the top of the card even with the watercooling

Manufacturer Response:
Hi, Please contact me directly at jacobf@evga.com Your card should idle around 40c, and 55c under load. I know what the issue is and I can correct it. Thanks Jacob
John N.
Ownership: 1 day to 1 week
Verified Owner
Few tips6/27/2009 1:27:39 PM

Pros: Waterblock looks very nice and fits well. Card is noticeable faster then my 280GTX in Fallout 3 and Warcraft, only games i have tried it with so far. Card came well packaged from EVGA for the shipping to avoid damage during transit.

Cons: Still runs warm, i tested it with the case open but no case fans blowing over it, with my Koolance Exos2 LX the waterblock and bottom of the card are staying cool (115F) with stock clock speeds but the top of the video card is getting up near 150F after a few minutes of gaming. Some air flow over the top of the card is ideal.

Overall Review: The stock water barbs are nothing to write home about, i swapped them with Compression fittings from Koolance, it uses G 1/4 threading. Make sure to use some plumbers tape on the threads to avoid leaks. Newegg is the best!

Manufacturer Response:
Hi, You should be seeing around 40c, can you please contact me directly at jacobf@evga.com as I have some ideas on why you may be seeing a tad bit higher temps than expected. -Jacob