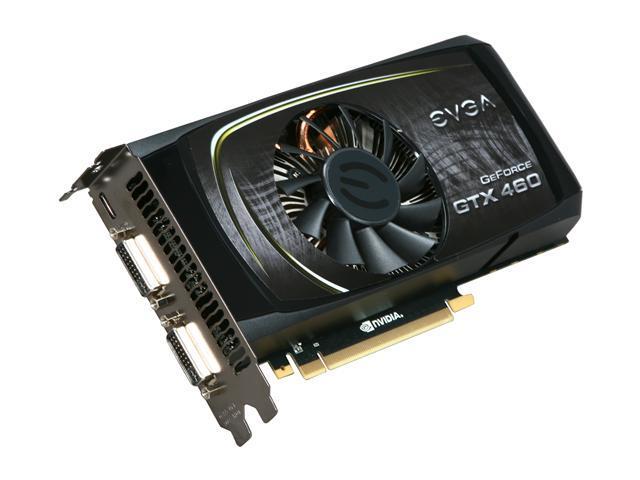 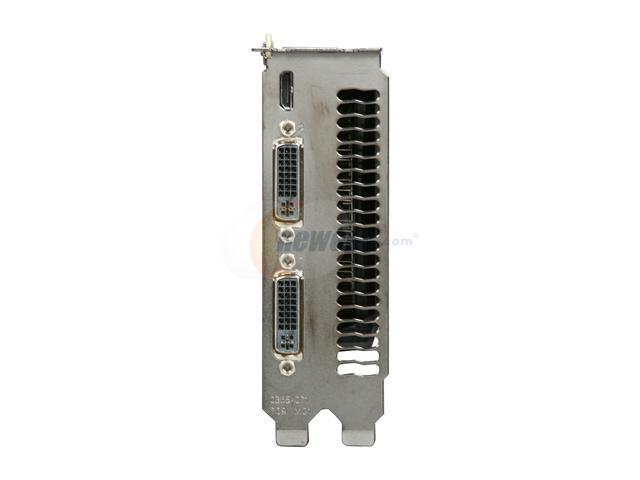 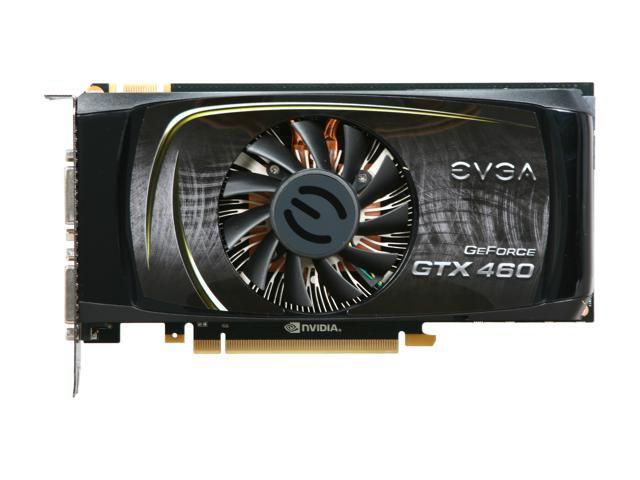 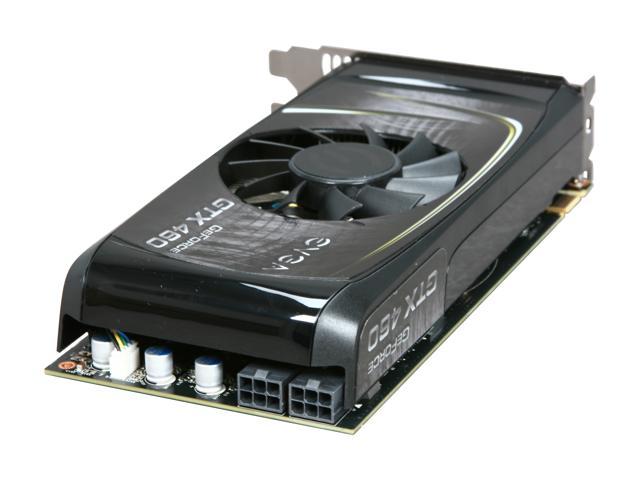 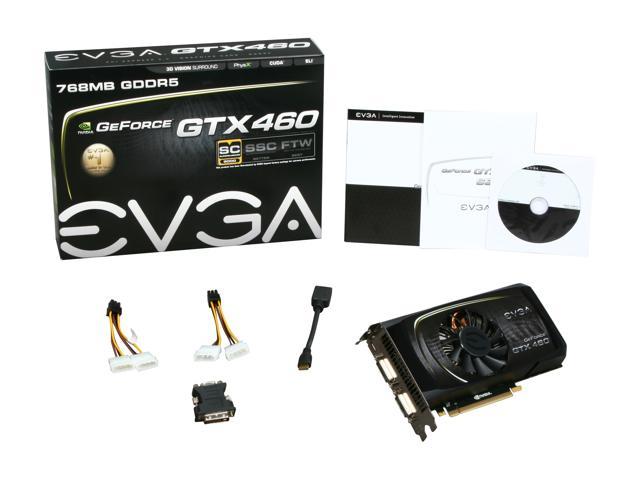 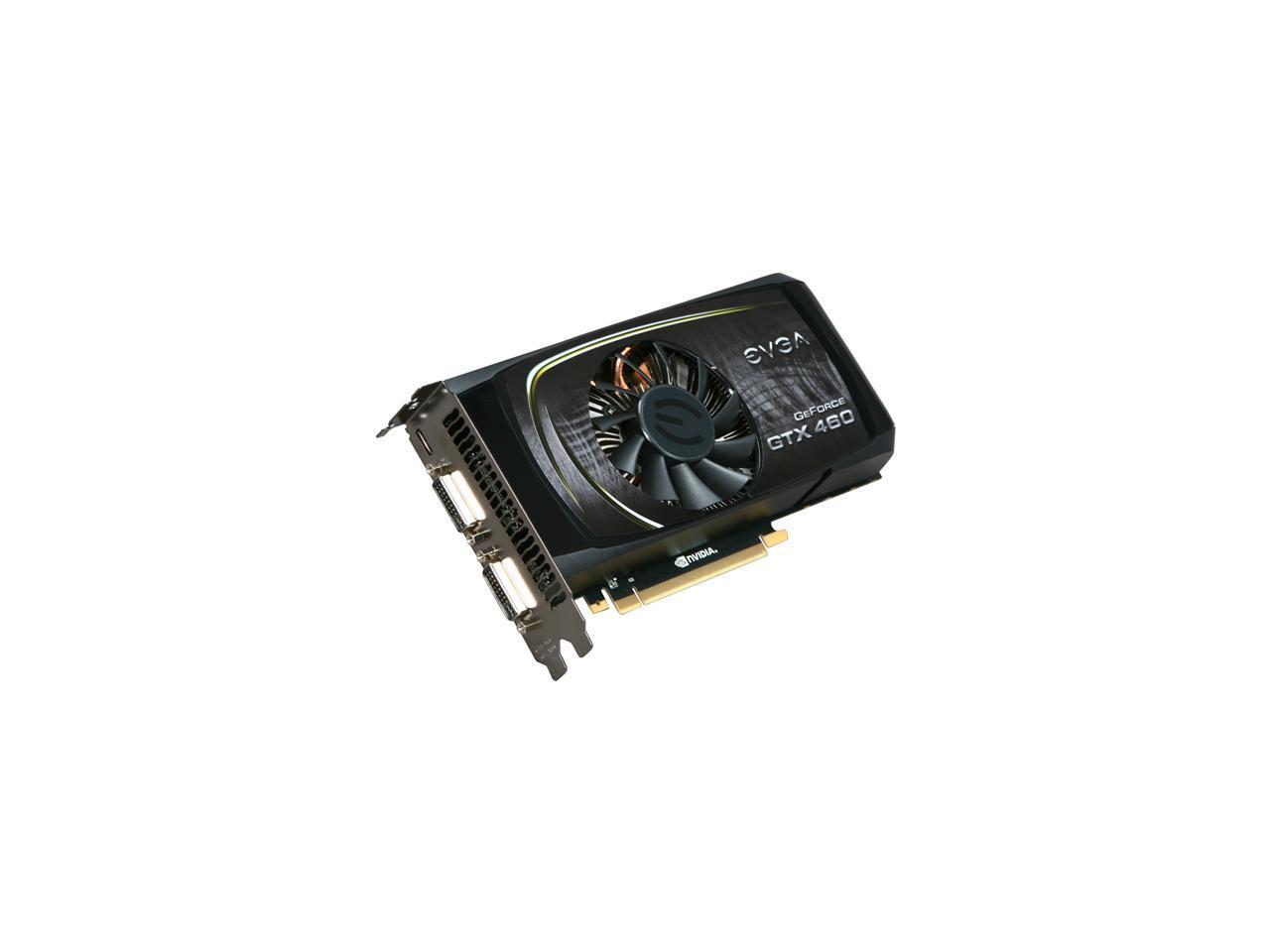 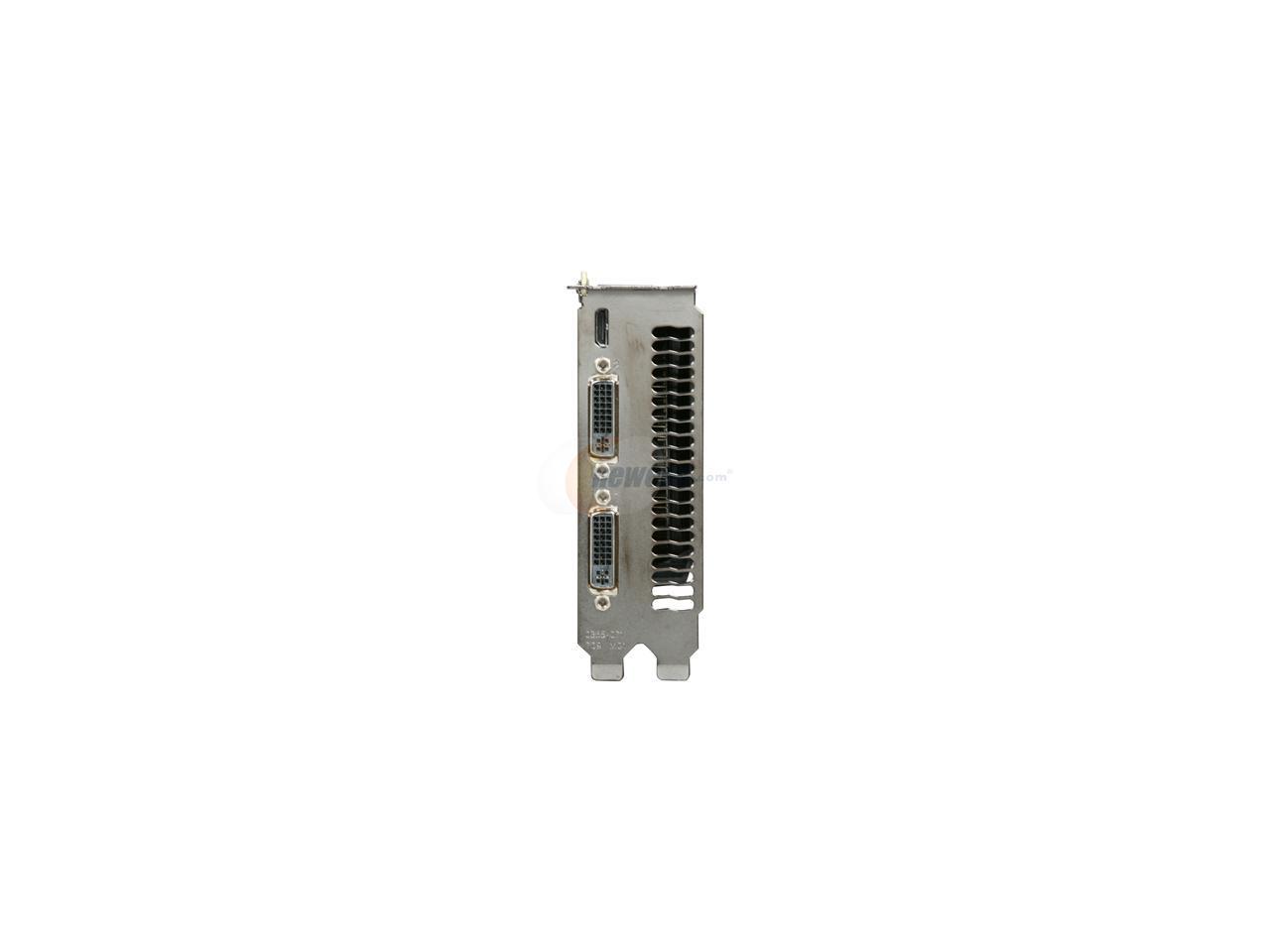 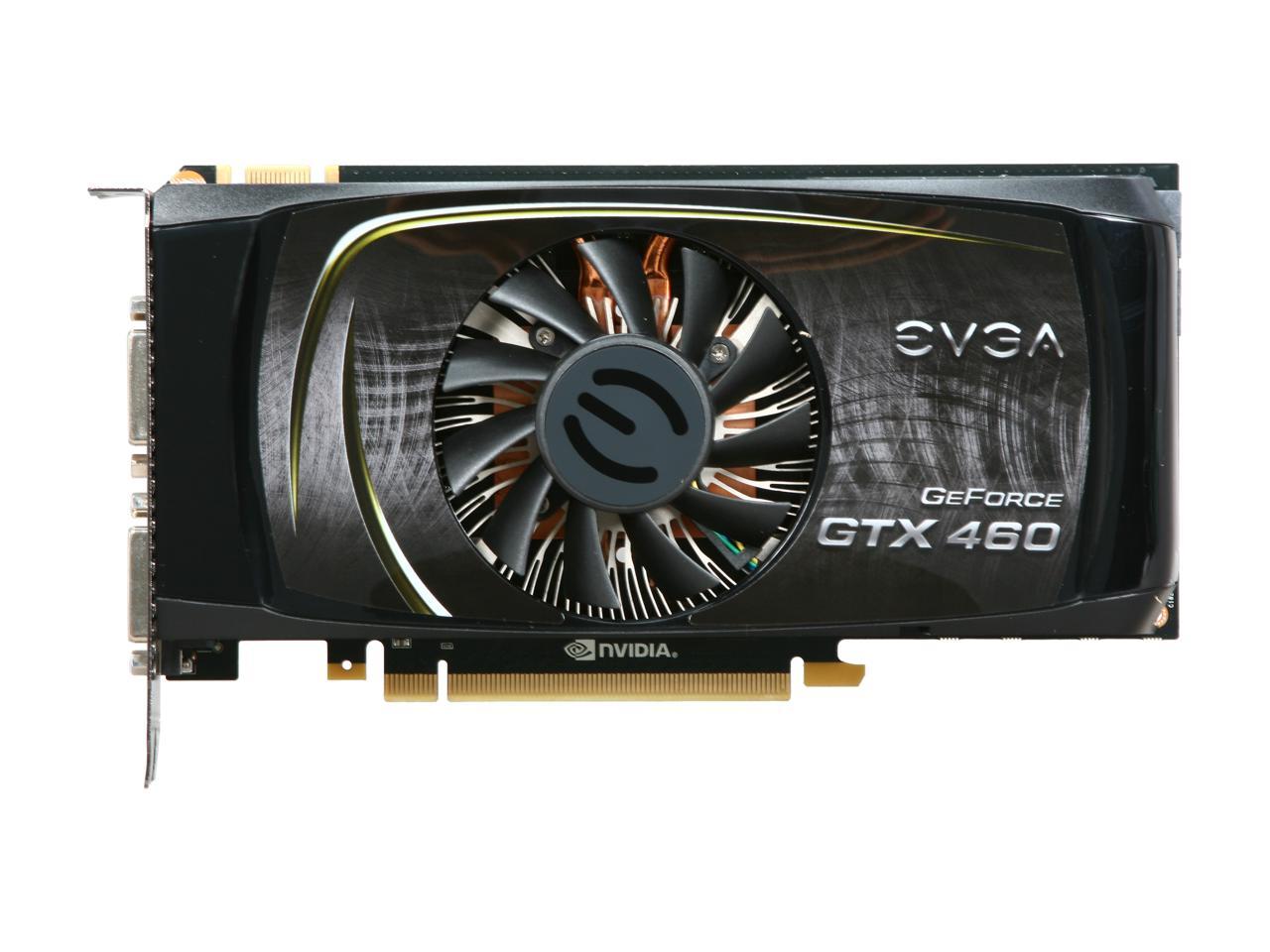 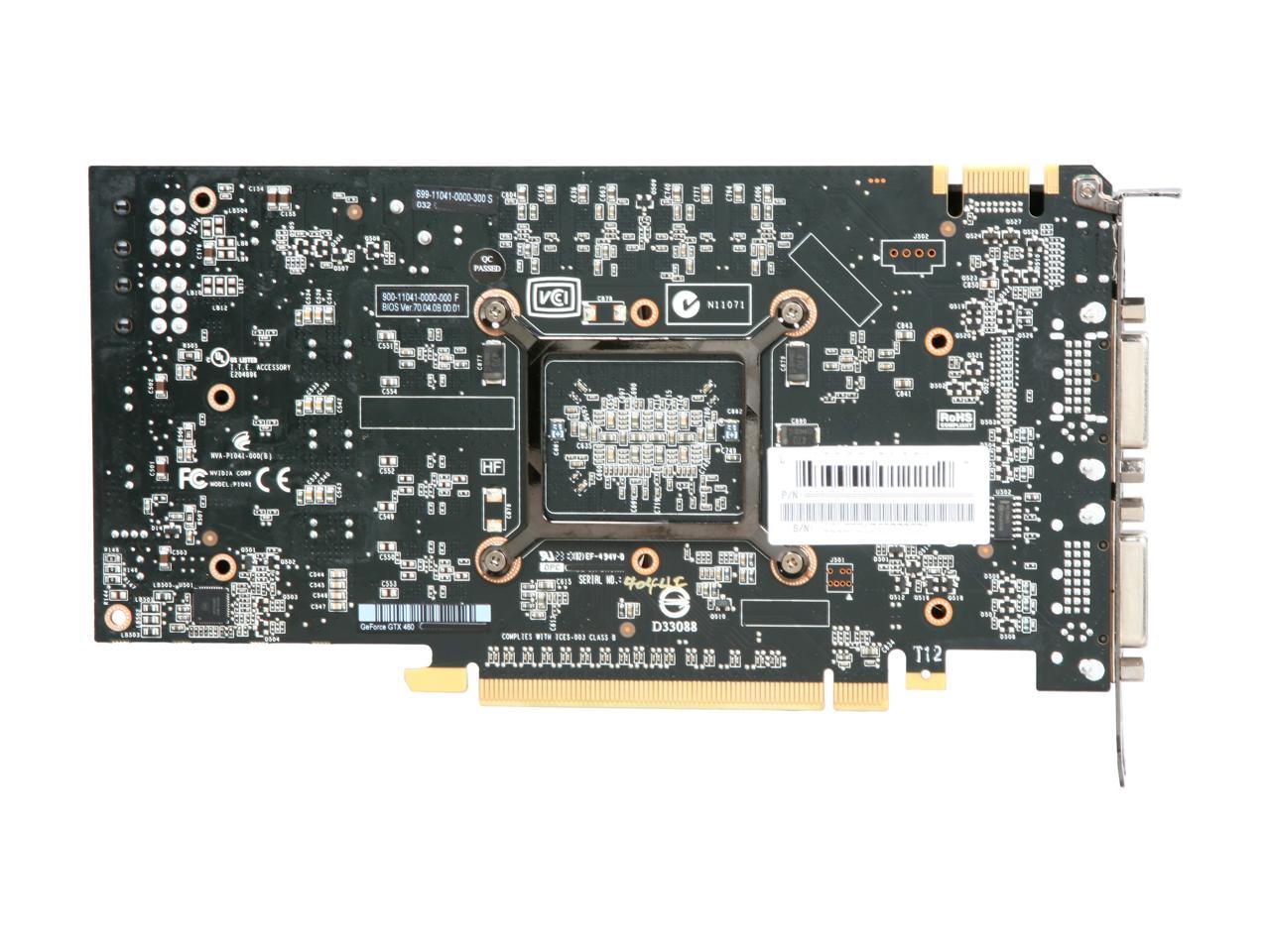 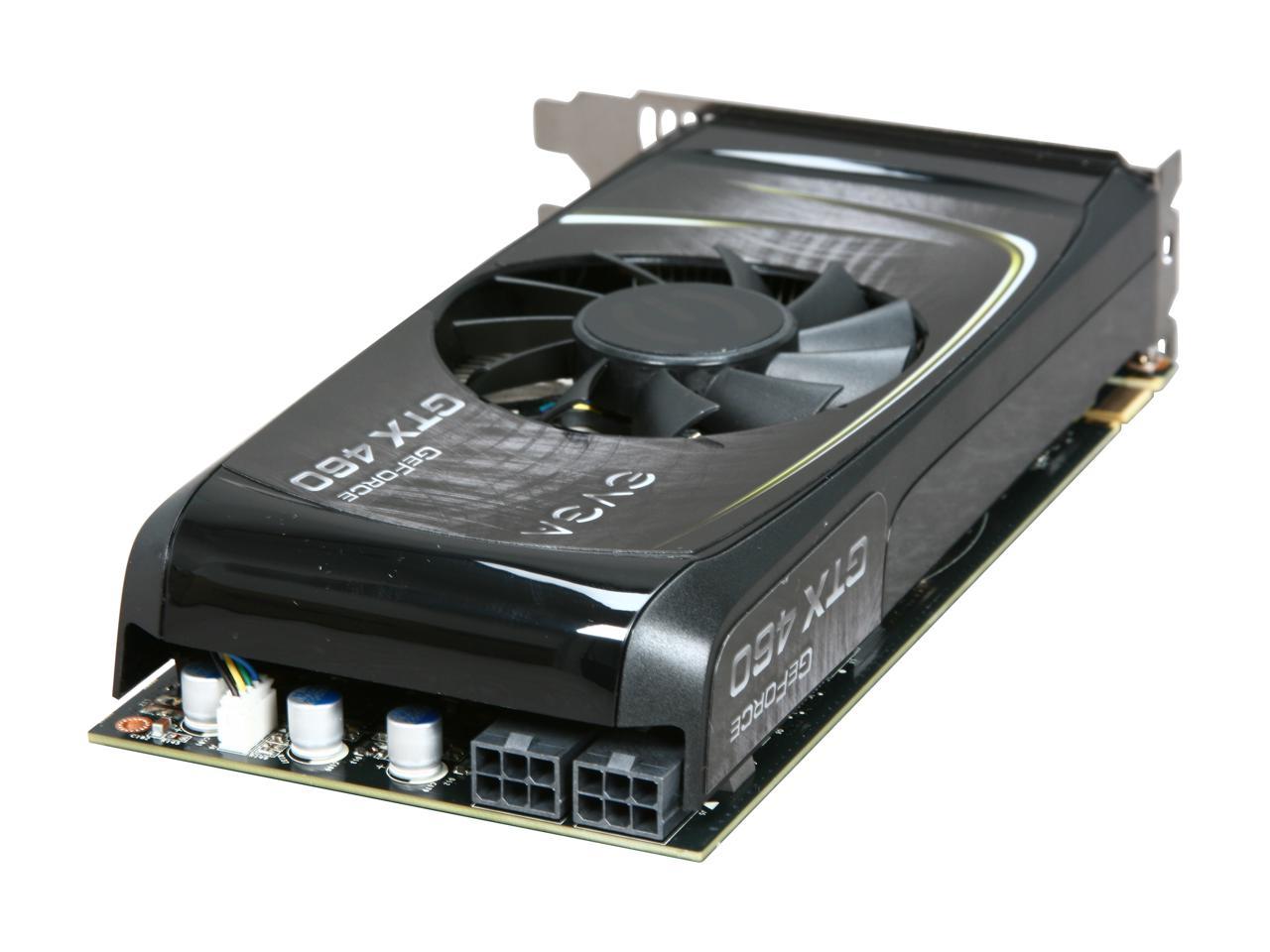 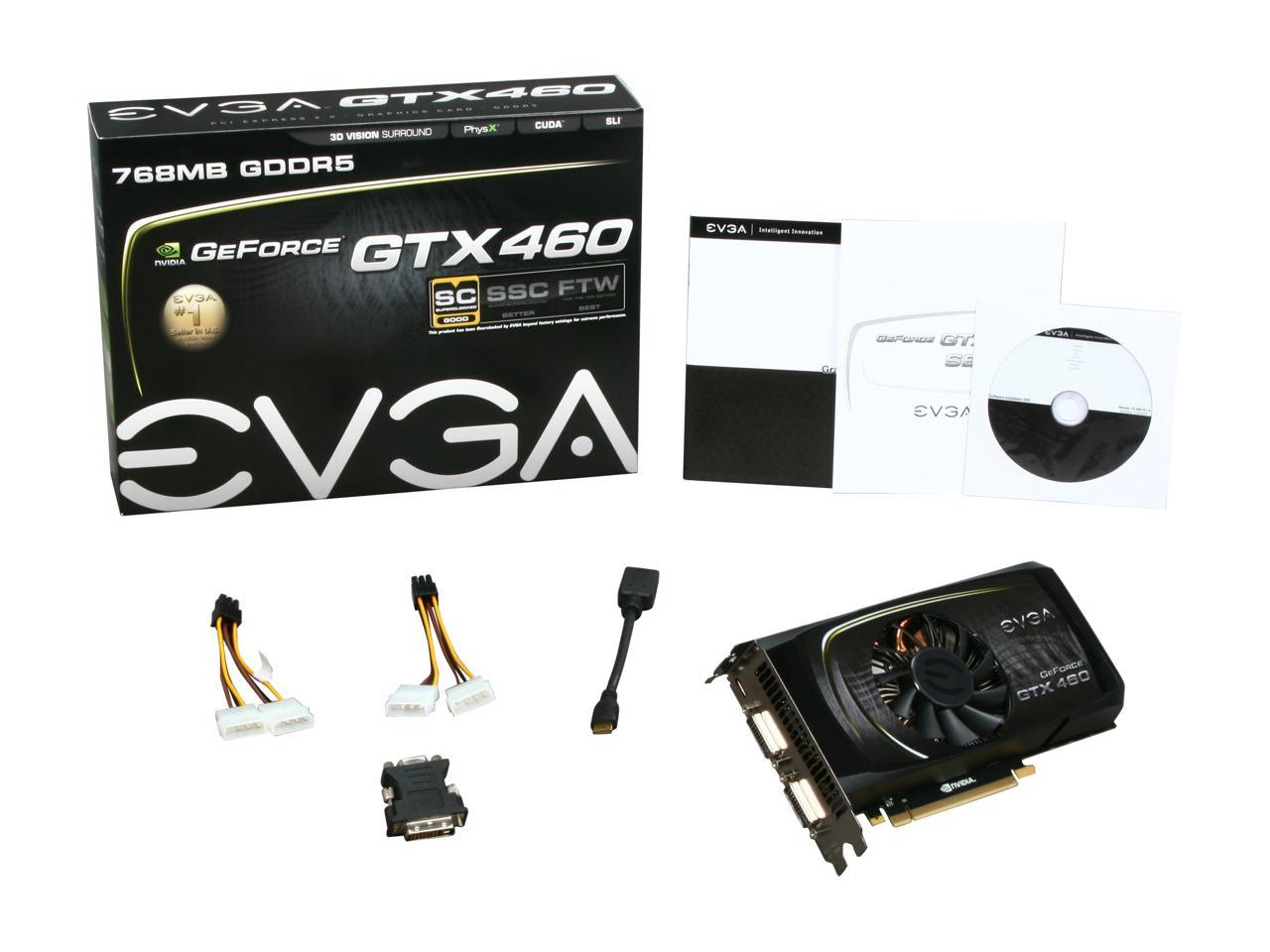 Pros: Since i am perhaps the first to make this review, i will make it clear as possible what to know. What i did not know was that after installing the card, using EVGA Precision, it reads my card with underclocked values however the temperature inexchange was extremely low when idle (34 degrees wow). When playing a game, it reverts this underclocked settings to your normal clock rates. This way when idling, you save energy and temperature. This card overclocks like mad, i am talking i acually hit 900 mhtz core clock. Unlike the other GTX cards, the 460 acually overclocks better. Another thing people should know is that the minimum fan speed is set to 40% while maximum is 70%. Even if you set yours to 100% its really set to 70% because of nvidia's forceware. However the fan speeds are still amazingly quiet and performs very very well for the price. if i had to say how good the card is, its between the HD 5830 and 5850. And this card is cheaper lol.

Cons: The original card i had was the 9600 GT (yes i know its old) and i thought it was time to upgrade and i am glad i made the right choice. So in comparison to my 9600 GT... -The GTX 460 temperature is lower idle and max load -The GTX 460 has higher clock rates -The GTX 460 is fantastic to overclock -The GTX 460 is acually quieter Comparison to the other GTX 470 and 480, it consumes less power and releases less heat.

Overall Review: If there was anything else i had to say, its the size of the card. Its small compared to the HD radeon cards i seen and its almost exactly the same size as my old graphics card. So a midsize case is more than enough room. Just make sure you have two 6-pin power connector with minimum 450 watts of power (24 amps on +12v rail).

Pros: Coolest running GPU yet. Idles at 28c to 30c. At full load looping Heaven 2.1, temp has not gone higher than 68c, with an ambient room temp of 77F. And, that's at a full bore overclock! Physically shorter than the 200 series by 2". Overclocking headroom is insane. I'm rock solid at 840, 1680 and 2090...that's a solid 24% overclock over the defaults. Tessellation goodness is awesome. Price to performance ratio just can't be beat. I purchased 2 of these and configured them in SLI, and they are out performing a single GTX 480 by an average of 10% to 15%, and cost $100 less!

Cons: Useless as a fishing partner.

Overall Review: I hear a lot of people saying that you need to spend the extra money to buy this card with 1GB of memory. In my opinion, as long as you are running a single screen, and your resolution is 1920x1200 or less, the 768mb version is perfect. The 1GB card will gain perhaps 2 to 8 fps more in most apps which is meaningless. If you intend to run higher resolutions, or multiple panels then of course the extra memory is very important.

Pros: i feel this card maximizes one's HTPC that may also double as a gaming box. i play dirt2, dragon age, bfcb2, and l4d2 at 1920x1080 with settings marked up very high. the card stays cool during gameplay and stays quiet while idle so i can enjoy movies and tv in the living room.

Cons: it has some power req's that may force some users to upgrade their psu's

Overall Review: it beats the snot out of my old hd5770 and is priced the same after the rebate. this is a recommended buy if you are thinking about it.

Overall Review: Great card, currently ruuning 900, 1800, 2000 rock solid. Runs at 30c idle and never exceeds 50c under load. I was impressed with rhe accesories in box as well, the unit came with two molex to 6 pin adapters, one dvi to vga and a mini hdmi to hdmi. The evga warrenty could have been better (three years with registration os good but I would have liked the lifetime one that is attached to higher end evga cards). Some would cote the lower ram as a con but as I only game a 1600X900 it dose not affect me much. Over all a solid gpu with lots of overclocking head room. I would reccomend to any budget gamer looking for an upgrade.

Pros: This card cannot be stopped. Civilization 5, Crysis, COD Black Ops, Far Cry 2, Company of Heroes in a major multiplayer battle... nothing slows it down. This card is simply banging. It's also short in length relative to other cards in its class, extremely quiet and isn't too power hungry.

Cons: It fits snuggly into my MATX board and case, but hey you can't have it all.

Pros: - Have not found a game yet it can't handle - Works like a charm - Relatively quiet - Moderately overclocked out of the box

Pros: The card makes the images on my screen look great. easy to install drivers. i also noticed how quite the fan was when i started up FFXIV....and then..

Cons: i realized why it was so quite. fan isnt working. so my GPU over heats in about 3mins of playing games, and then shuts off. i looked around the forums on the EVGA website, and notice that ALOT of people are having this problem. so i have to get a replacement from them. And that might not even work. according to some people on the forums, they went through 3 cards before they got one that worked. I notice to that most of them claim they got their cards from this site. I'm not saying don't buy the card, but Iam telling you to do the research at EVGA forums about this card. THERE ARE ALOT OF PEOPLE WHO ARE GETTING BAD CARDS.

Overall Review: I really don't have alot of money to just buy another card, so i'm forced to sit here and wait almost 2 weeks for my replacement. I wish the people at Newegg would look into reading the forums at EVGA so they can get a better understanding of whats is happening to this product.

Overall Review: this is for the people with questions like mine that i couldnt find answers 2, this will work on a 550w psu it will fit in a antec 600 with room 2 spare -i have a 19" screen and its resolution is 1360 x 768 i have maxed out bfbc2,resident evil 5,singularity,medal of honor,cod waw,cod mw2,prototype,far cry 2, cod black ops