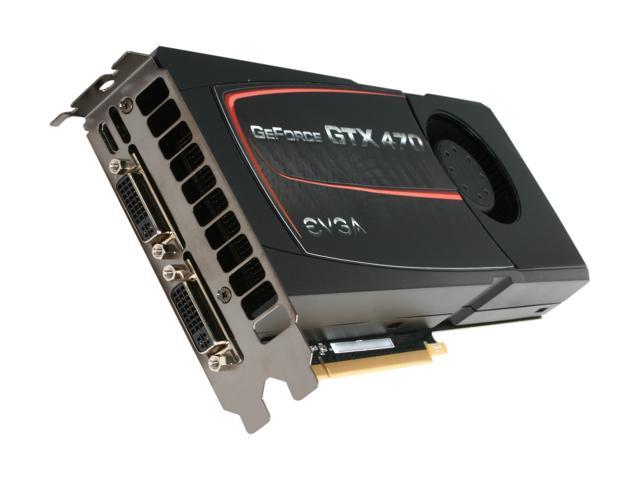 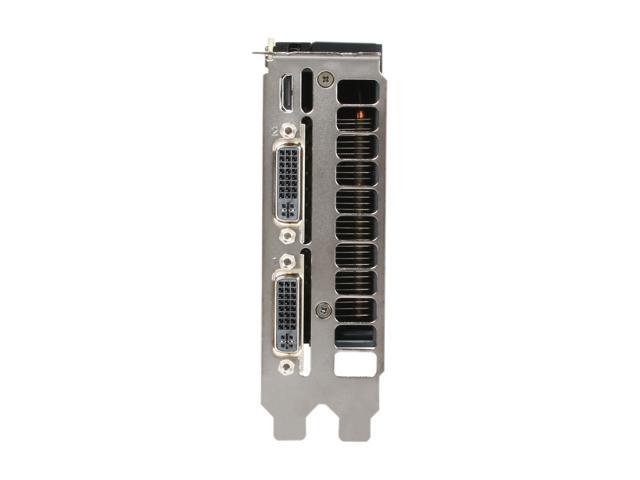 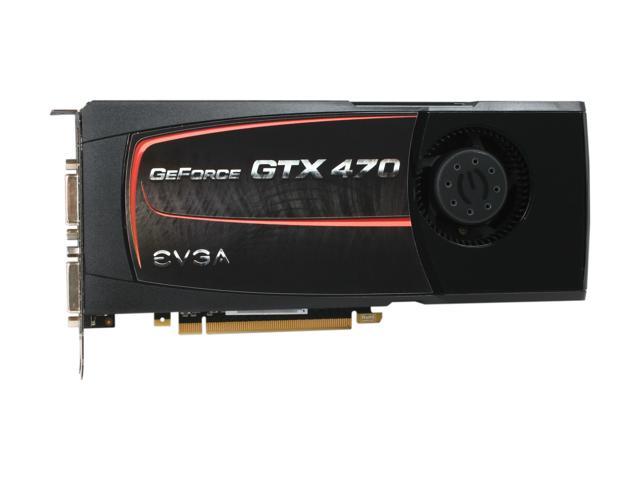 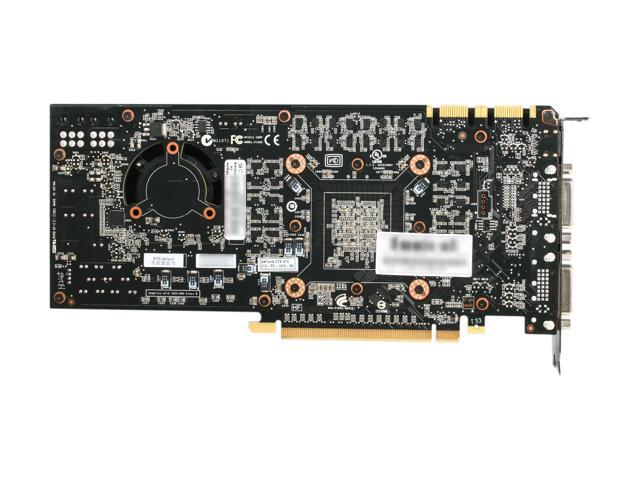 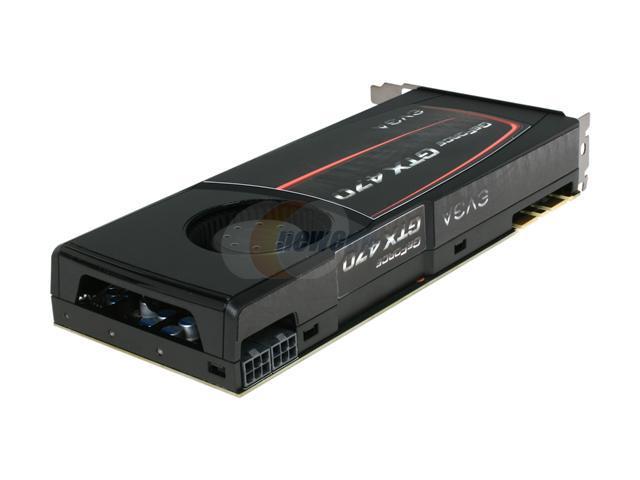 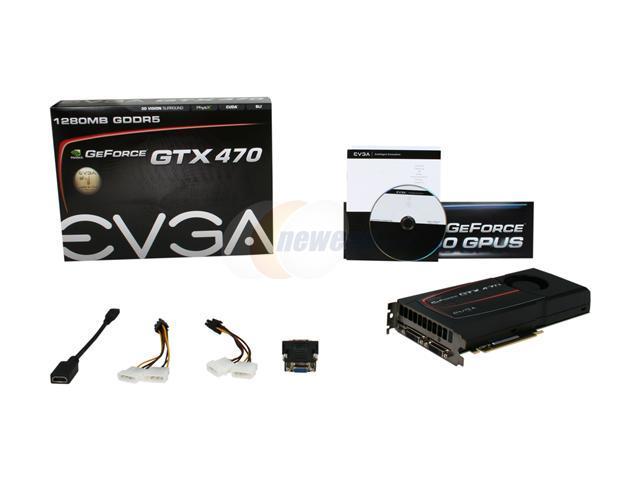 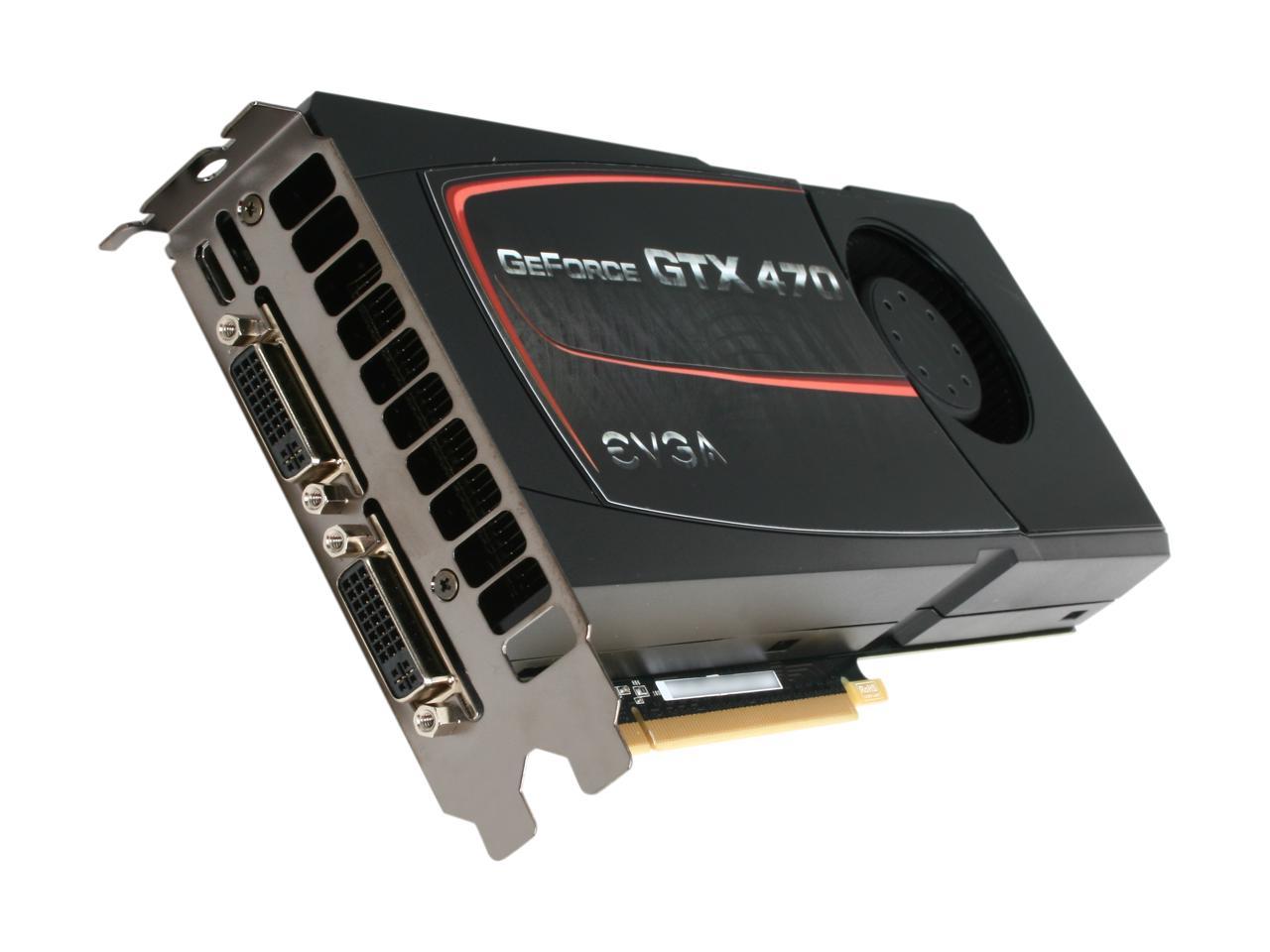 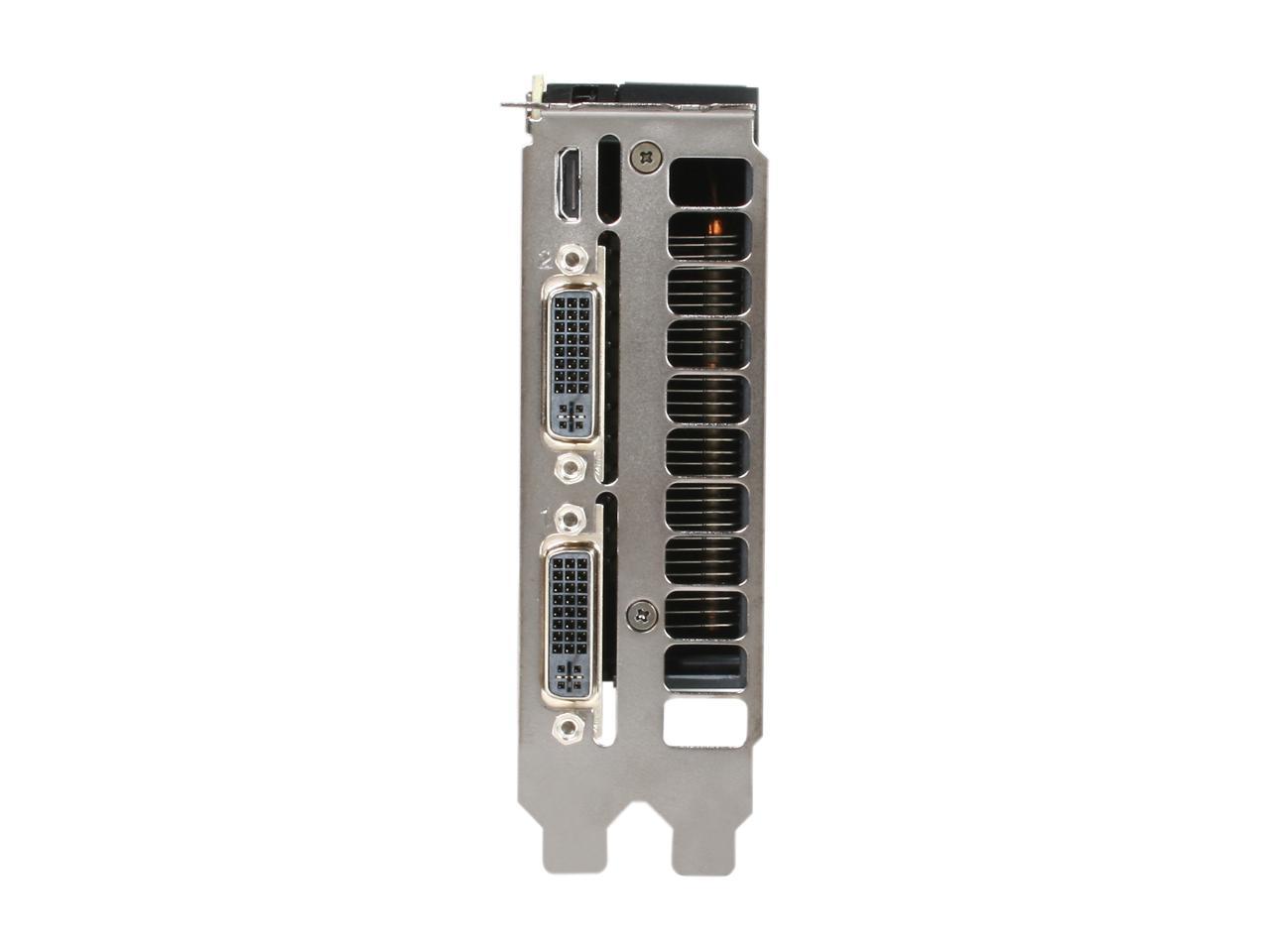 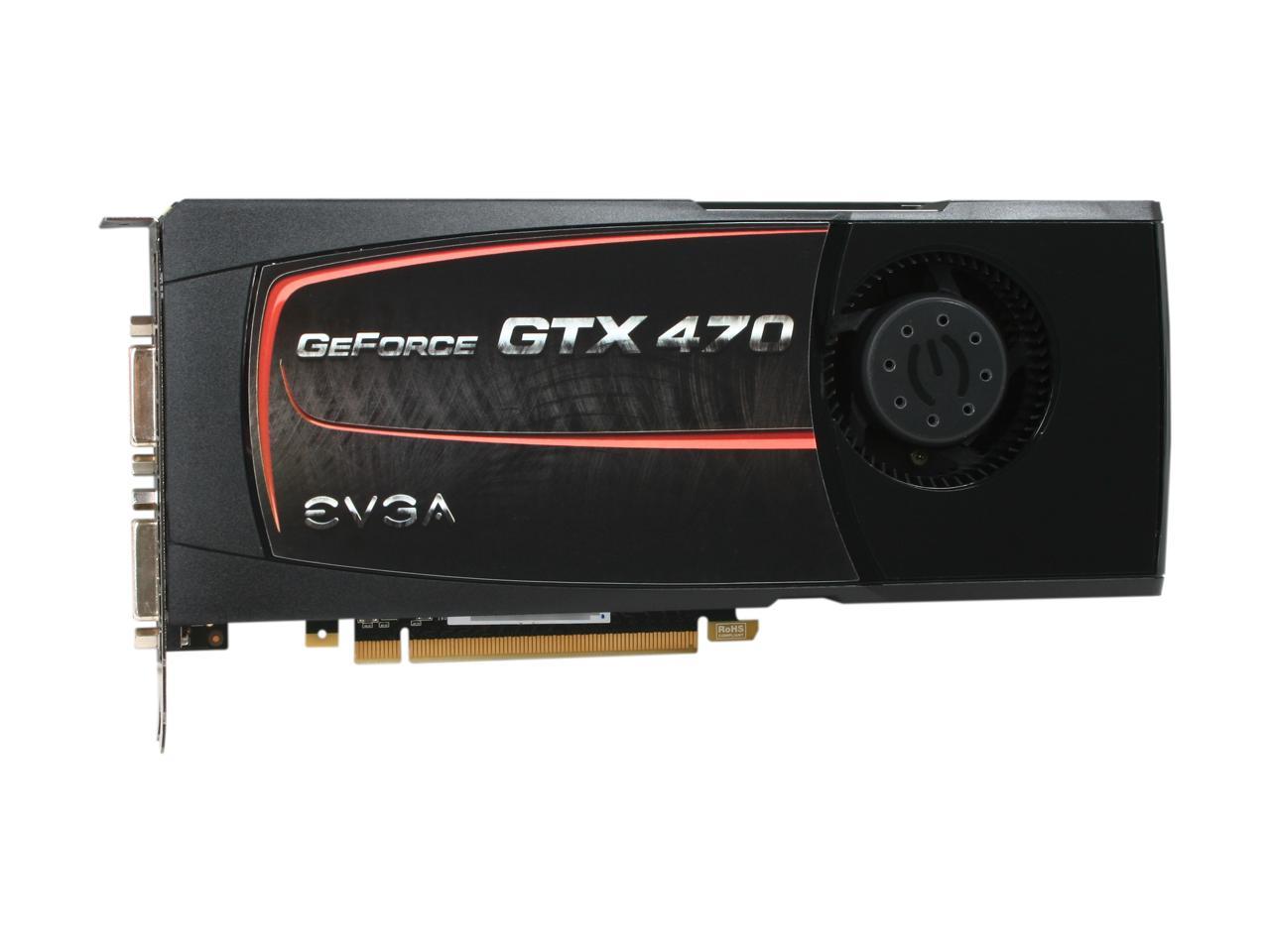 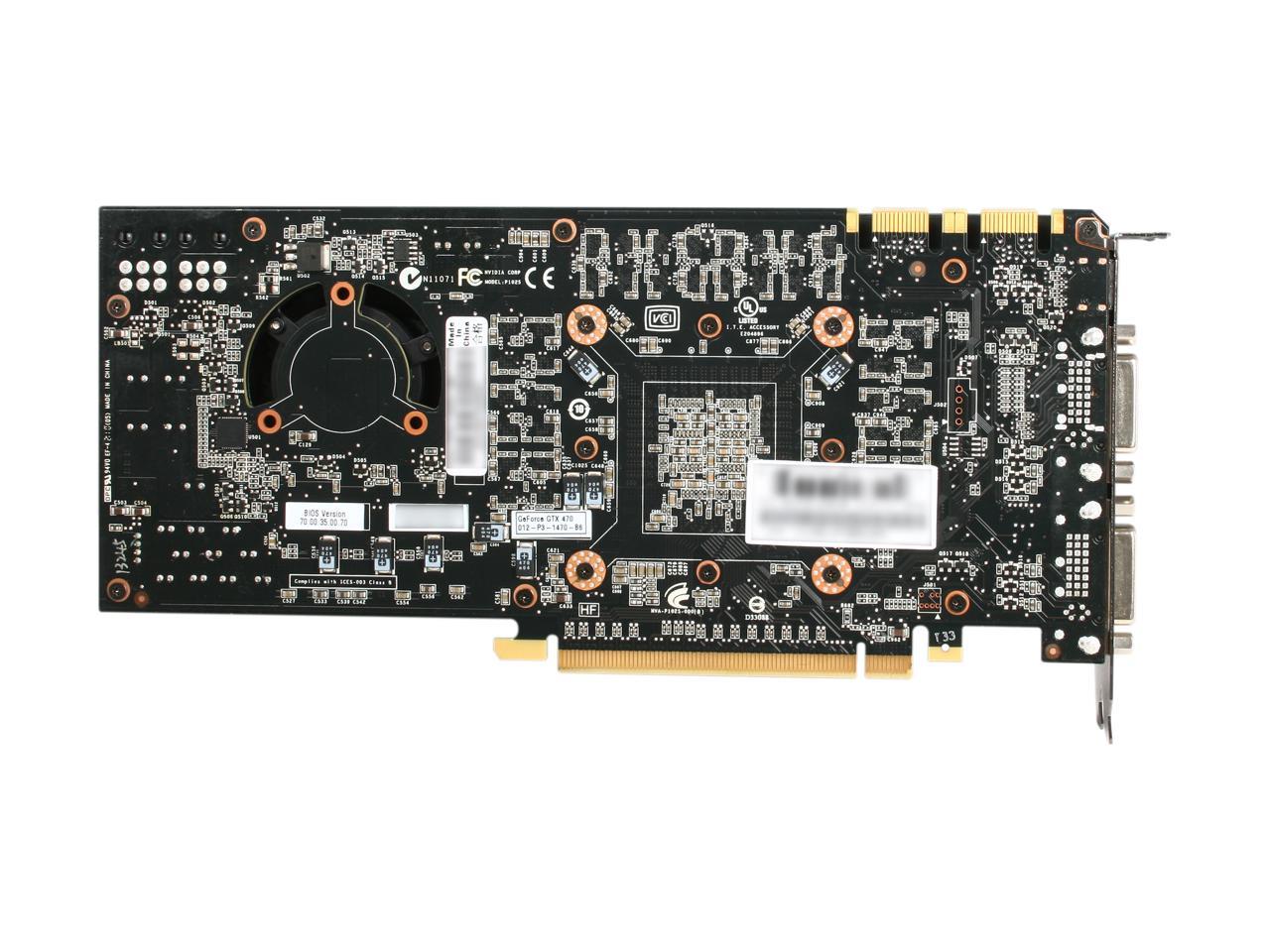 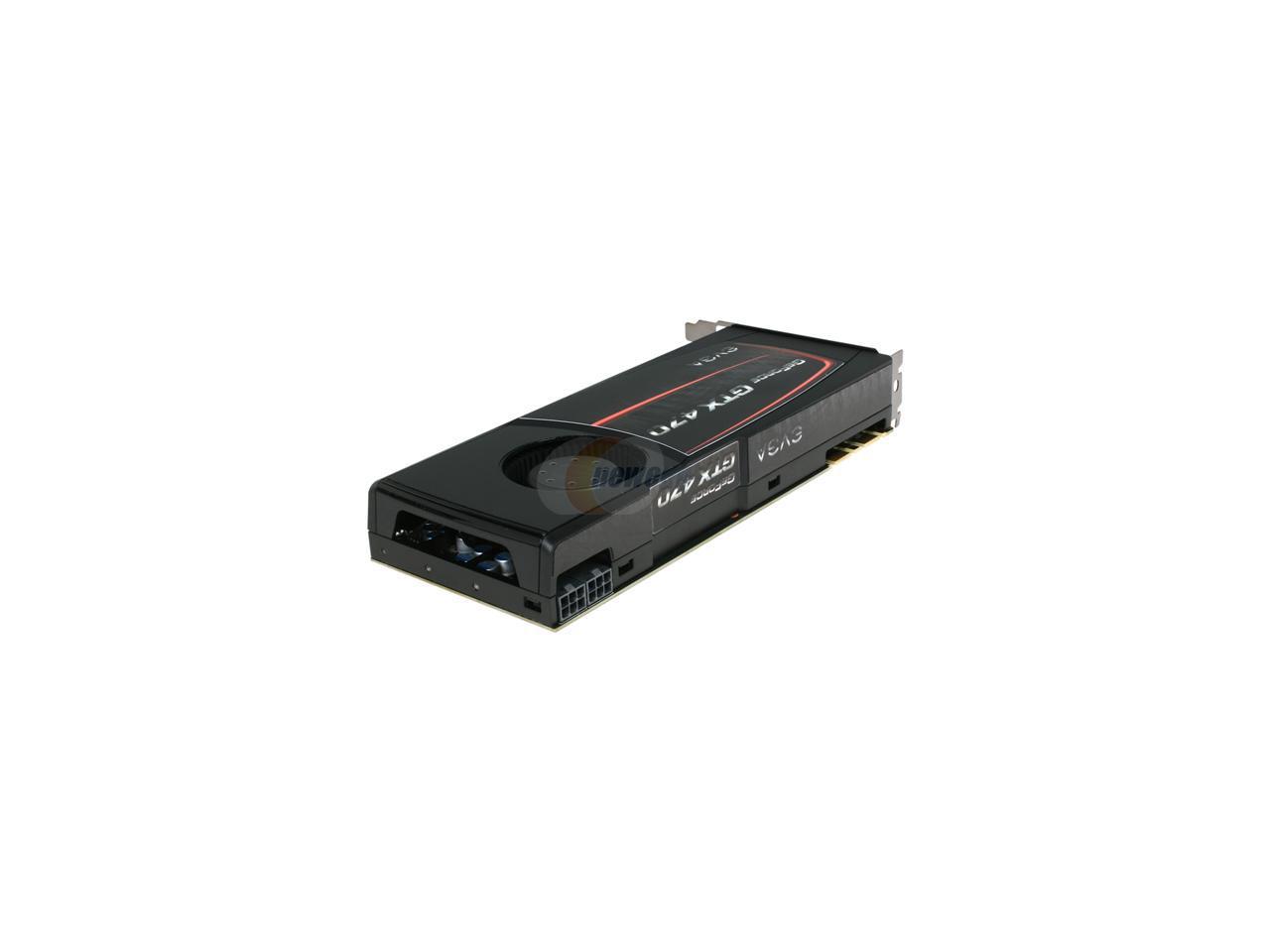 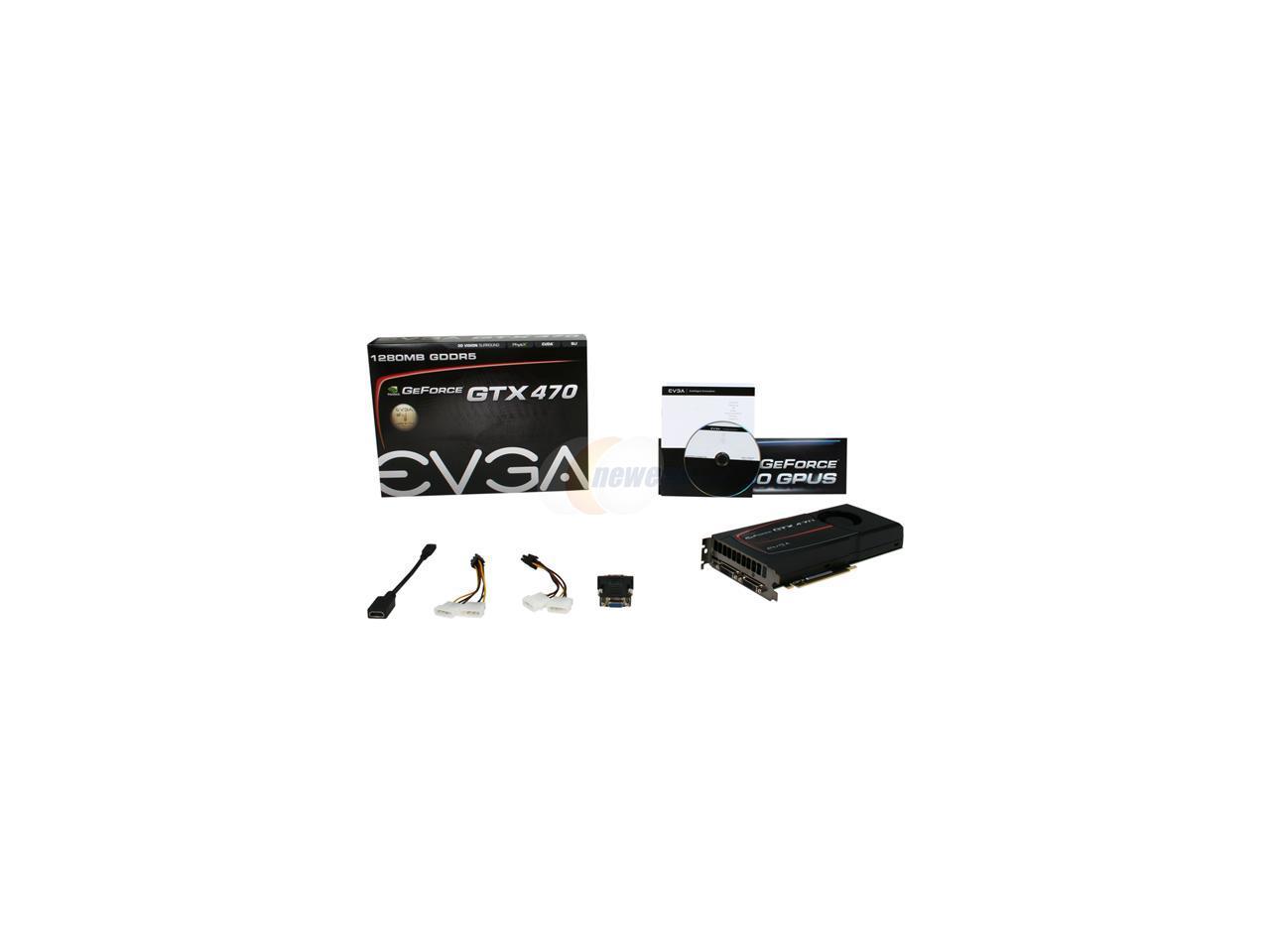 (400) Write a Review
OUT OF STOCK.
Specs
Reviews

Pros: One card alone, performs very well in 95% of games I have. The only ones that gives this card a challenge are the "graphically intense / open world" games. Those are games like Crysis, Metro 2033 , Fallout 3 with graphics/texture mods, Grand Theft Auto 4, and etc. All other games this card smokes them drastically. BTW this card does run Dirt2 very well on Maxed Dx11 settings. Now TWO of these cards in SLI, that is pure graphical bliss. Right now I can run Crysis in Maxed out DX10 mode, full screen @ 1920 x 1080, with 16x Anti-Aliasing with 50+ frames per second. 2 480's however run it at 60ish. So depending on how many graphic intense games u have, you can pull it off with one 470. But if u have some harsh games, then 470's in SLI mode is the answer.

Cons: Okay, everybody's favorite debate here, is the heat. In my PERSONAL experience, this card does run hot. However, the temps I get on this card are EXACTLY THE SAME that I have gotten with previous graphics cards ( 8800gs / HD4850 / Gtx 275). So personally, I think it's blown way out of proportion because 90% of "High Perfomance" cards produce alot of heat, so that is nothing new. Also certain games put alot of pressure on this card. Depends on how much work it has to process, which goes back to those "Graphically Intense" games. My experience as right now with SLI cards, is 87 degrees consitstently. Remeber that's TWO cards running. One card will be a little less, but at the most I havent broken 87 and that's gaming for an hour atleast. Lower end / older games didnt "Burn" as much. Besides, that's why you register the lifetime warranty with EVGA, youll be covered. Finally, these cards are actually made to handle temps up to 100 degrees, so I promise you guys.....it will be okay.

Overall Review: As of 7-20-2010 there is a promotion on this card for $50 dollar discount AND a free Just Game. So this is a huge steal, because most stores sell THIS card for $369 or a little more, and it's not even the superclocked version. And on top of that, if you're debating on this or a GTX480, you COULD spend $100 more than a single GTX480 and get 2 of these cards. That total's out to $600 470 sli setup Vs $1000 480 sli setup, for $100 more than a single 480! Finally, with all due respect to those that say they don't see a difference between this card and an 8800 series card......... REALLY????? Then you guys must be playing OLDER games, because newer games (2008 and up) and the "Graphically Intense games" have a night and day difference. Anything 2007 and earlier, will have a minimal difference. But beyond that, come on. I had an 8800 series card so I know this from experience. Either way whatever you decide, just enjoy and have fun!!!!!

Pros: This card is amazing it doesn't even run as hot as some people say. with fan at 60 percent the card goes down to 38C. I can overclock the heck out of this thing and it stays running perfectly stable.

Cons: * Had a tough time resolving freeze ups and black screens with this card. Took me several weeks of tweaking settings and trying different things. With the help of various forums, I was able to get it fixed. 470driver issues with audio driver incompatibility.

Overall Review: * The 5850 can be OC'd to levels passing the 5870. I don't have a lot of gaming benchmarks; but both 470 and 5850 cards are very similar. I'm sure the 470 can be OC'd much higher but heat starts skyrocketing. You'd need water cooling to take full advantage of the 470. You can drop a little heat by adding a special backplate but then your costs start rising. The Cinebench11.5 score is interesting; 5850 really pulls ahead. 470 takes leads in in Heaven 2.1. * Noise is the difference for me. To keep the 470 cool; you really need the fan cranked up. I have to give it up to Asus on the EAH5850, they really got the heat under control even with a massive OC I can keep fan low and not worry about heat. Not so with the 470. Heat is a concern along with power. *My Rig: Gigabyte MA785G-UD3H motherboard Phenom II X4 965 @ 4.03GHz WEI-7.5 4G ADATA DDR2 800MHz RAM WEI-7.5 (2) WD 640GB cavair black hard drives Windows 7 Pro CM Scout case Hyper 212 plus cpu cooler in with push/pull fans

Pros: It works hard! At first I was a little disappointed that when I initially maxed out all AA, AF and settings in BC2 it wasn't smooth as butter, but I run it at everything high, 8xCSAA, 16xAF and it runs well at that. I would guess it averages around 45 fps with those settings in a 32 person full server. It overclocks very well. I have been using EVGA Precision and have easily OC'ed it to 750 core/888 memory. In EVGA Precision, it lists these values as double (1500/1775). I like the look, feel, and layout of the card. My last card was a 4870 and the PCI-E power connectors stuck out the end of the card, interfering with the bays in the front of my case. This card's power pins face the side of the case, which made it incredibly easy to connect and just better cable management. Using EVGA Precision's manual fan control at 80%, the temps stay very low during extended BC2 play. They don't seem to get above 60 celsius at that fan speed. Idles on auto at 49 celsius.

Cons: When you do get the fan going higher on manual, it's quite loud, but I really don't care considering it's only loud while I am playing a demanding game. When I have it on auto during everyday use, it's inaudible. This should speak pretty well for the card that this is really the only con I can come up with.

Overall Review: I haven't had any issues so far with drivers or anything. Everything seems to run smoothly and the way it's supposed to. I'll admit I wasn't wow'ed the first day or two that I had this card, but it works hard and pumps out good performance. After some extended use, I've seen I can have the settings on high and AA pretty much maxed and it pumps out pretty much the same performance as 4xAA, for example. I would recommend this card for anyone who wants to play the best games out there, and I hope to pick another one up in the future for SLI (although I need to get an SLI mobo first :-D). I think it's a little pricey though at the moment. Not sure why you would spend 30 extra bucks on the superclocked version when you can overclock it yourself for free. Maybe I'm missing something here. Antec 900 Two Case Gigabyte MA790X-UD4P AM2+/AM3 mobo Phenom II x4 940 OC'ed at 3.4 GHz 2 x 2 GB Corsair Dominator RAM 1066 MHz 60 GB OCZ Vertex SSD 650 Watt Corsair PSU EVGA GTX 470

Pros: Dx11, 1.2Gb of ram and 440 cores. Runs Unigine like a dream tesselation is very cool but you definitaly need a 700plus power supply with at least 40amps on the 12volt rail either combined or total.

Cons: Fan does get very loud at higher speeds, although it replaced two 8800gt's which i could literealy cook eggs with. Also with a $360 price this is no cheap card.

Pros: Excellent graphics card. I upgraded from 2x 9600GT in SLI mode and this card was a cosmic leap forward. I maxed out all Crysis settings at the highest resolution w/ no problems at all (could only go "high" with a few "medium" on the old setup).

Cons: My system locked up a couple times while loading COD MW2 on the first night. I'll ensure I have the latest drivers (vice what came on the CD) in case that's the issue. This wasn't a huge snag given the great overall performance, but it was enough to prevent a five egg rating.

Pros: Amazing performance from this thing. It is destroying every game I have thrown at it at the highest settings, 1920x1080. I see no reason to get anything more powerful than this unless you have an extreme hatred for jagged edges and require 124x AA. Also very pleased with the temps and fan noise of the card. After reading the reviews you would think this thing was as hot as a George Foreman and as loud as a 747. People REALLY need to stop exaggerating. I am using a mediocre case (antec 300) and getting idle temps of 37-41C and peaked this card at 79C in Crysis. All while the fan spun at a lazy 40%, completely silent.

Cons: The reviewers. I almost didn't buy this based on all the complaints. Either these people previously used on-board video in a passively cooled case or they are putting the fan at 100%, only way this could be considered "loud". The cards fan is silent and cools perfectly fine with the fan on the factory setting.

Overall Review: Buy one! you won't regret it. :)

Pros: Huge performance improvement over the 8800GT. Maxes out any game thrown at it. The card does struggle on a few (metro 2033) when fully maxed. Fan provides excellent cooling.

Cons: None really, other then it struggles on a few games when completely maxed in DX11. Also, I can't seem to overclock this card that well. But I believe my PSU just can't supply the power needed for it (530 watt, not really up for the task - but works fine on stock)

Overall Review: I went from a 8800GT to this card. HUGE performance difference. Despite what everyone here is saying the fan provides excellent cooling. If they say otherwise, either A: the case they have has no airflow. or B: Ambient temperatures are high. My room is around 69F-72F and I have a lot of airflow. The graphic card maxes at around 80C with the fan on the graphics card at 46%-50%. 80C is not high for a graphic card. High is over 100C (for graphic cards) - in other words ignore the complainers who understand nothing about graphic cards.