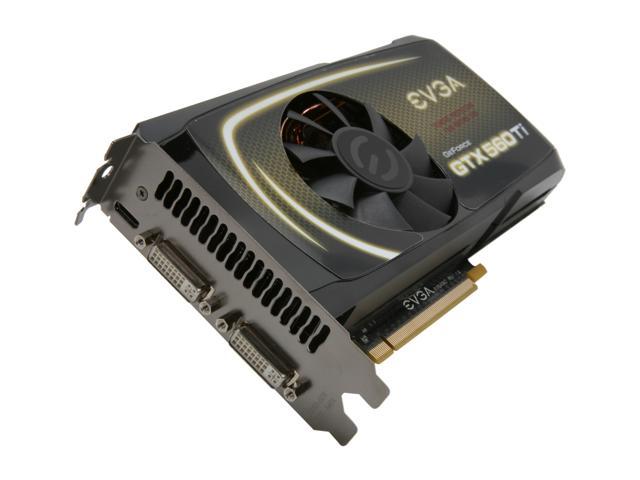 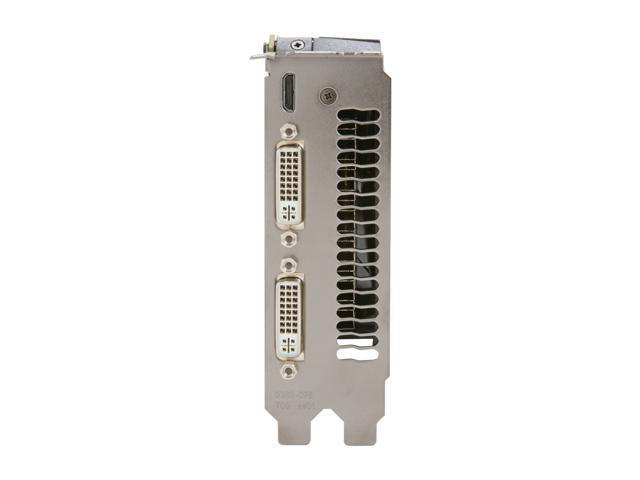 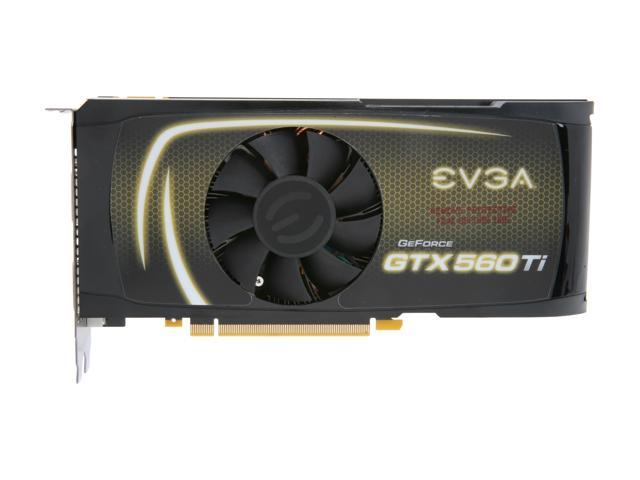 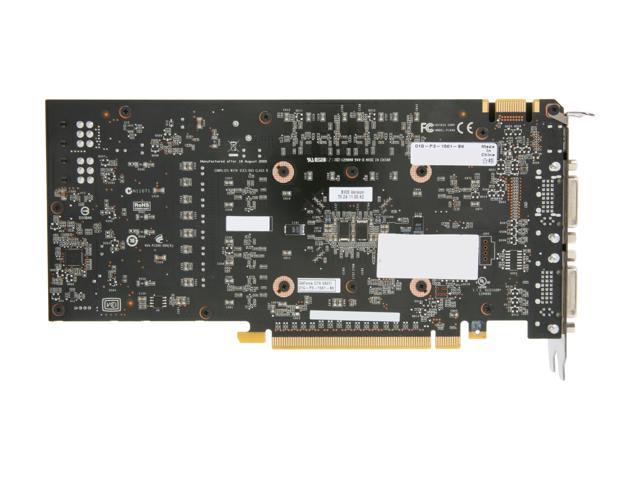 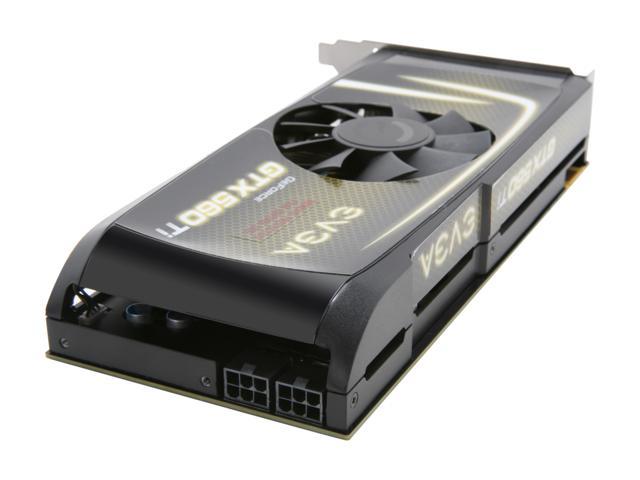 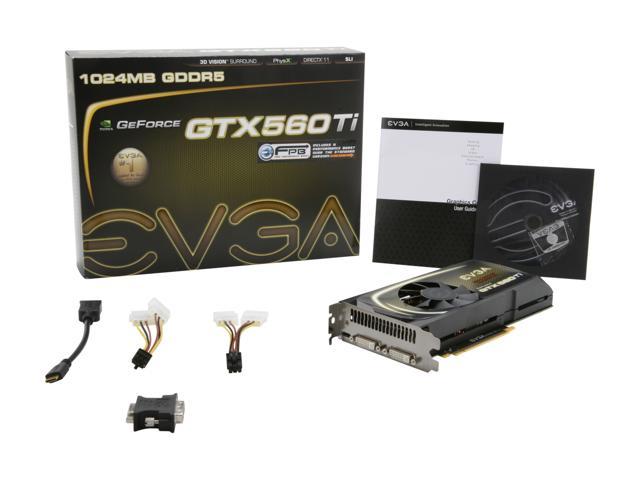 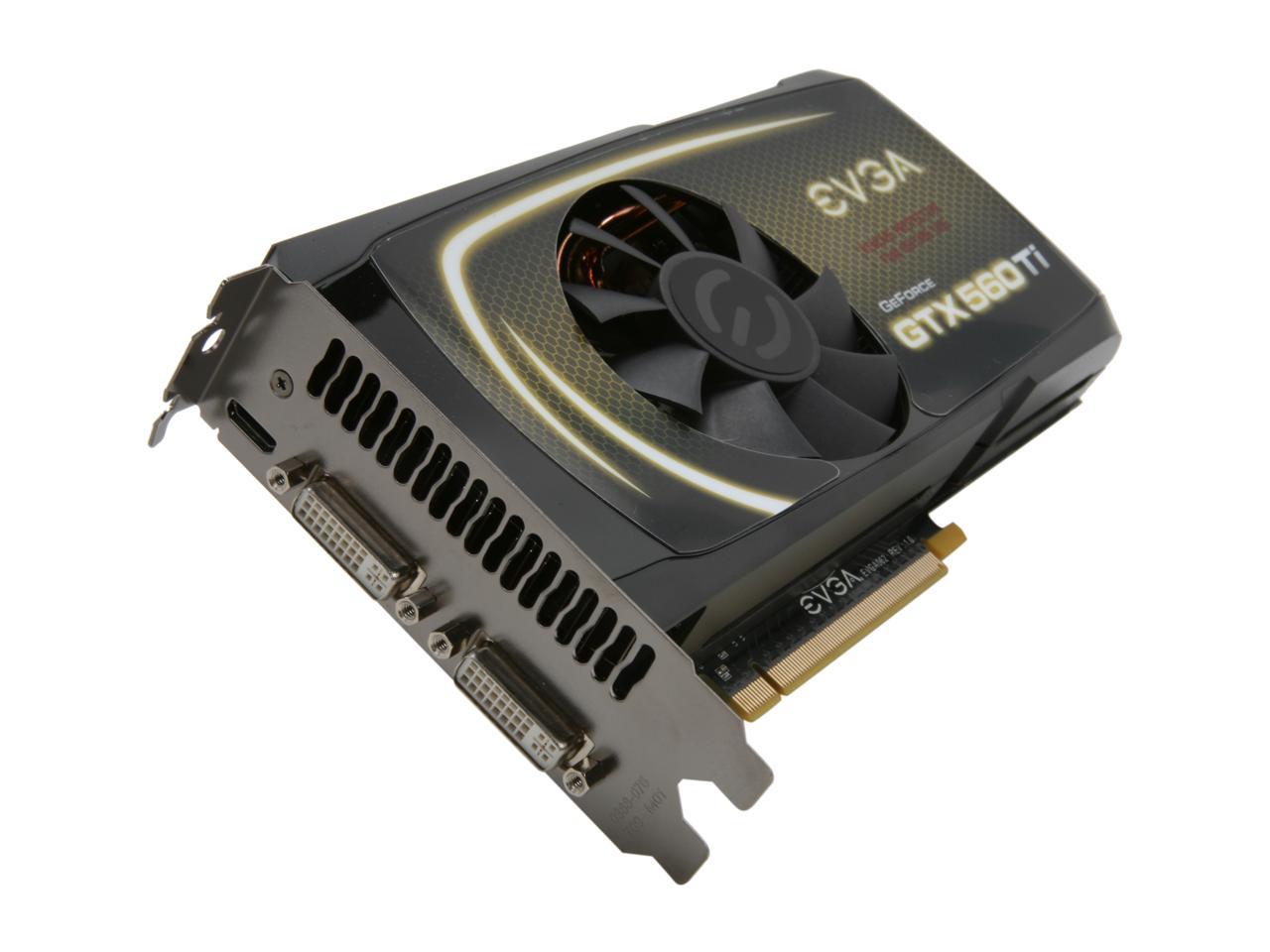 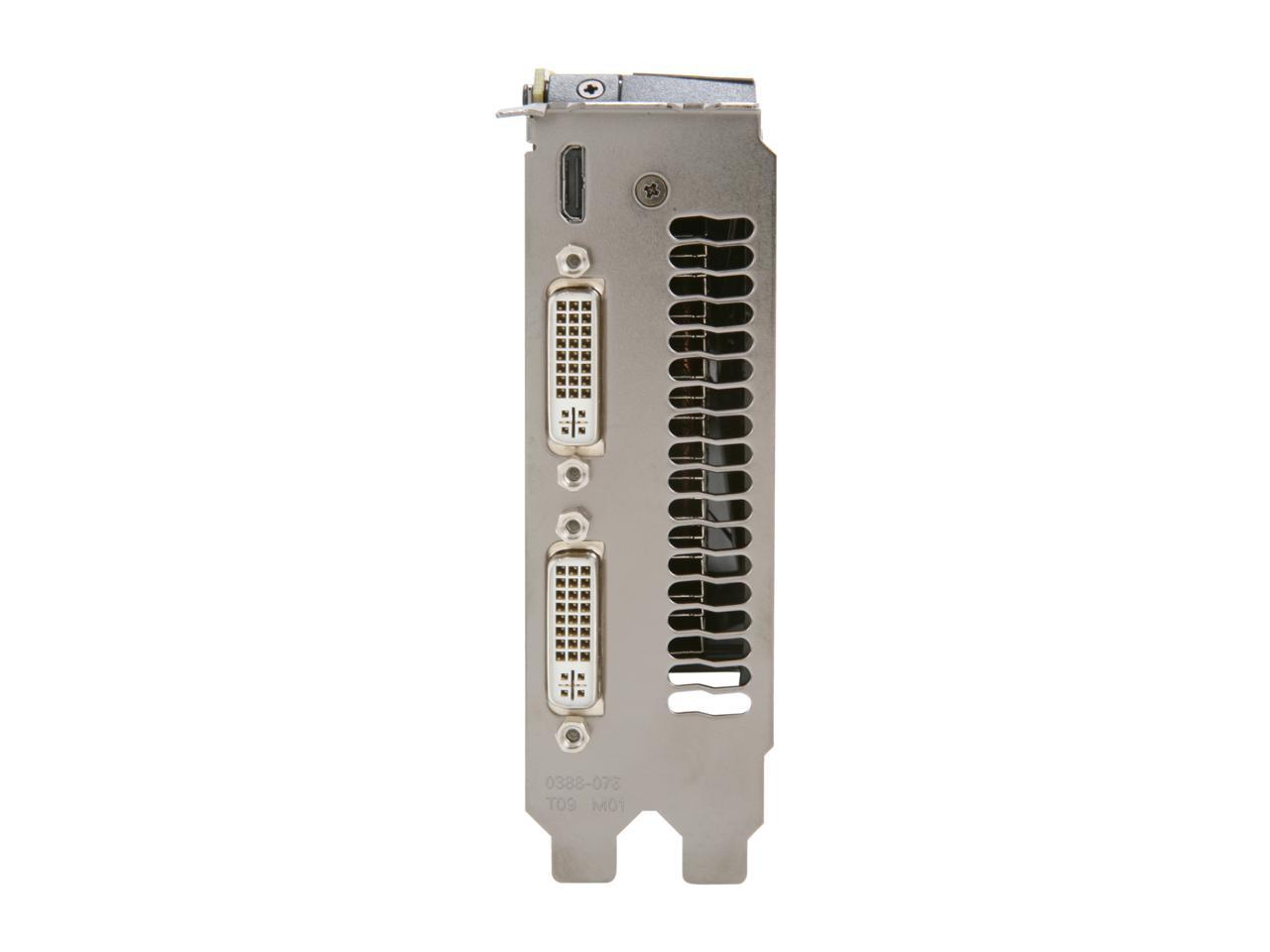 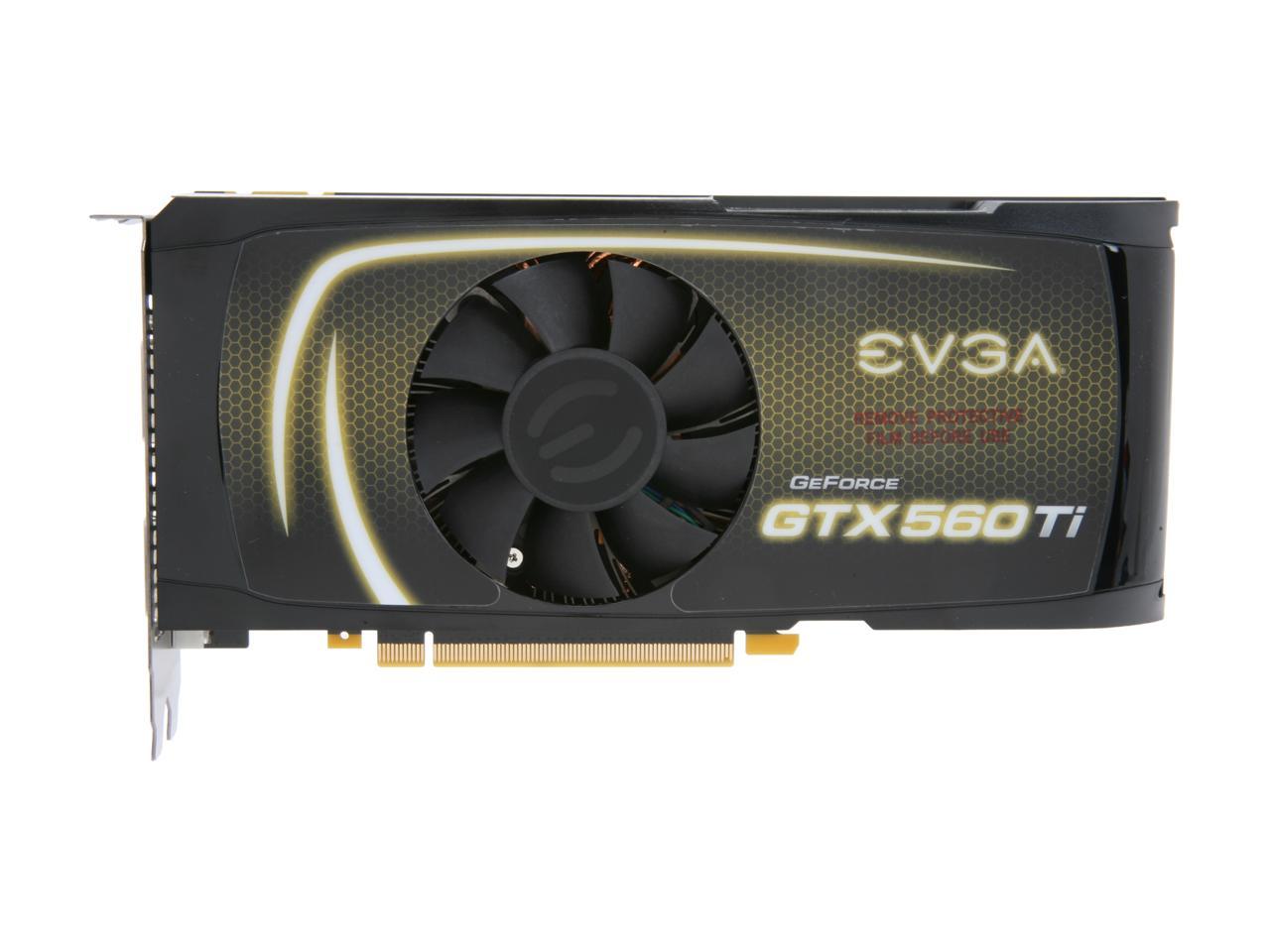 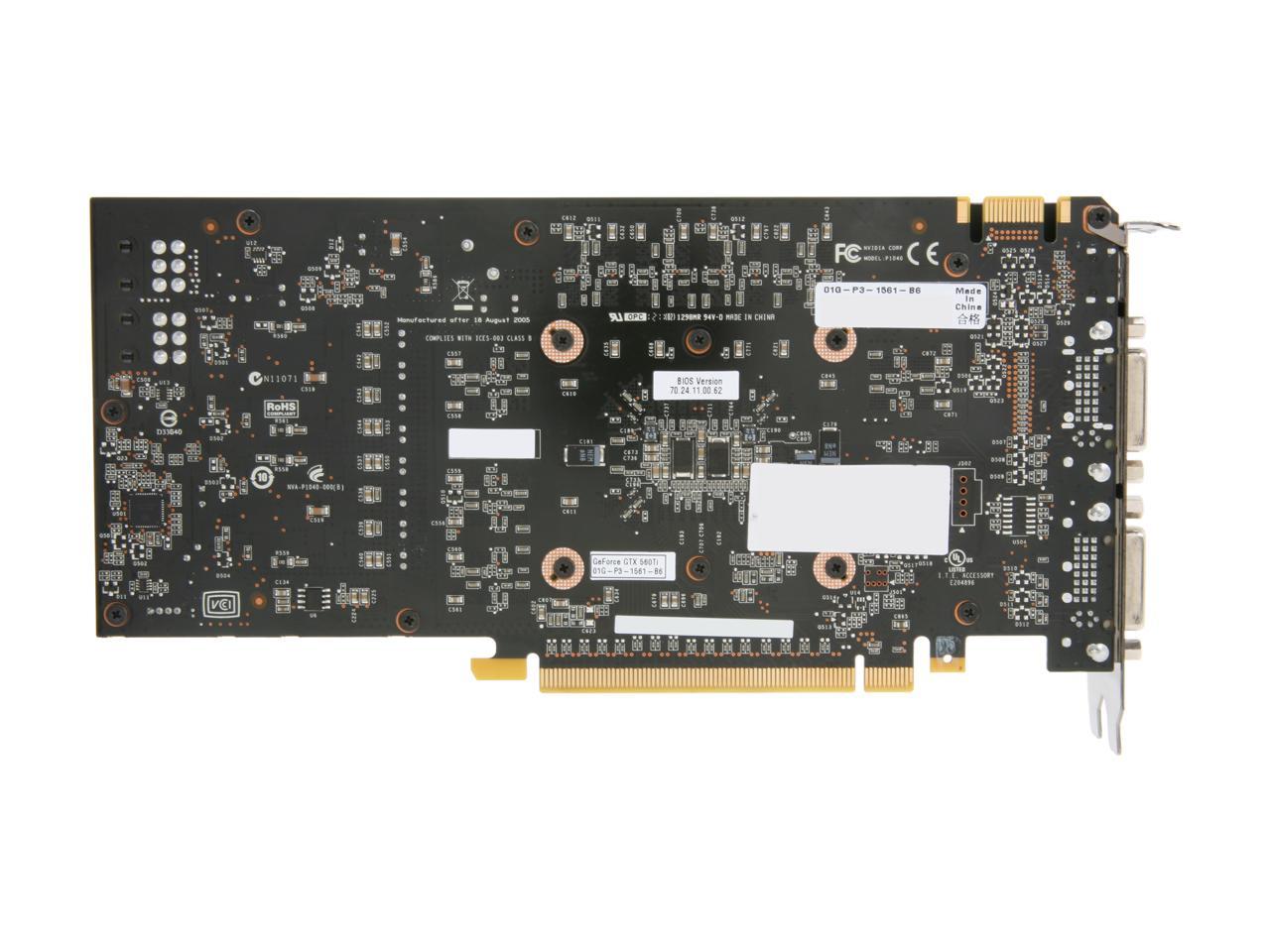 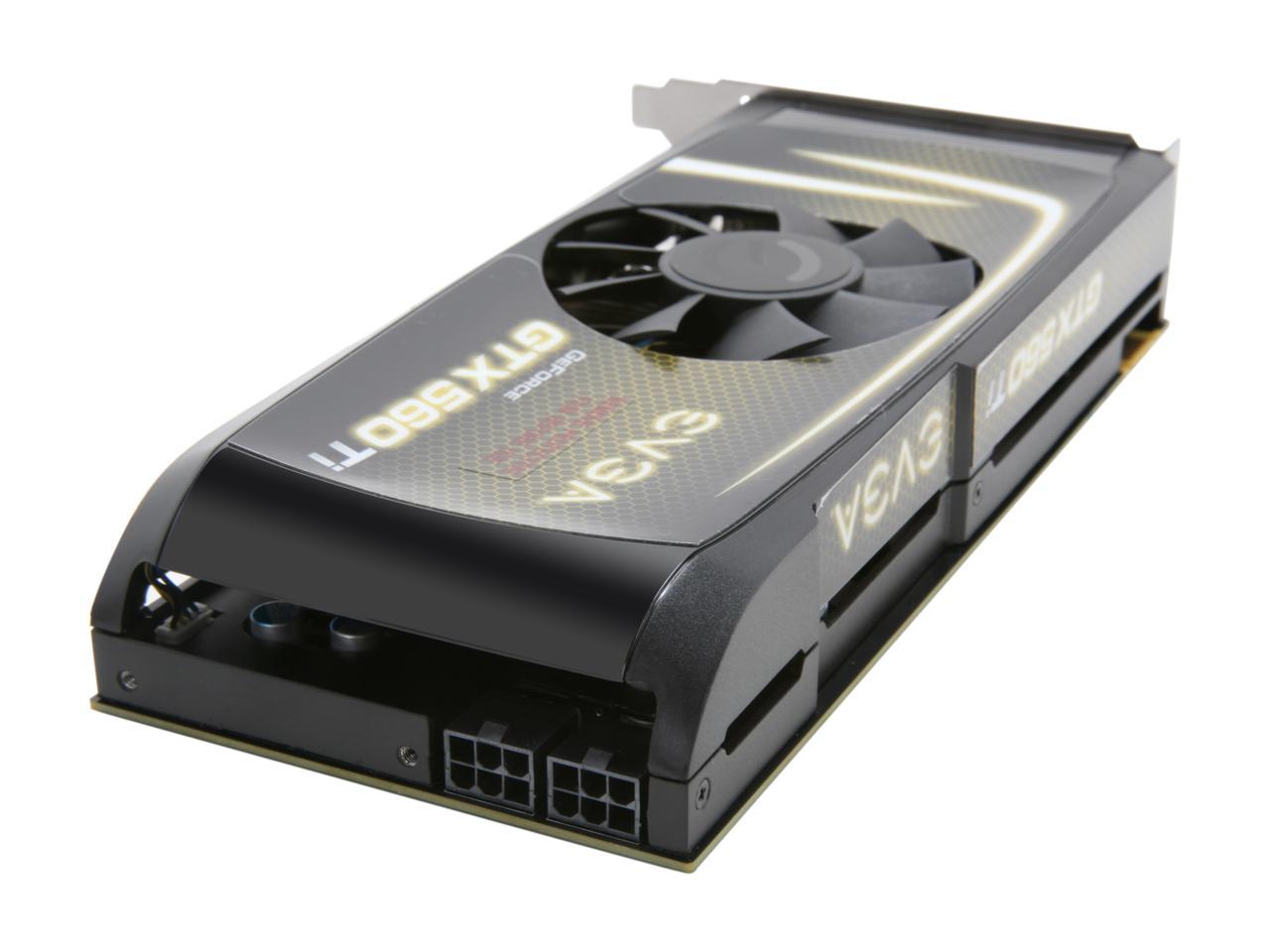 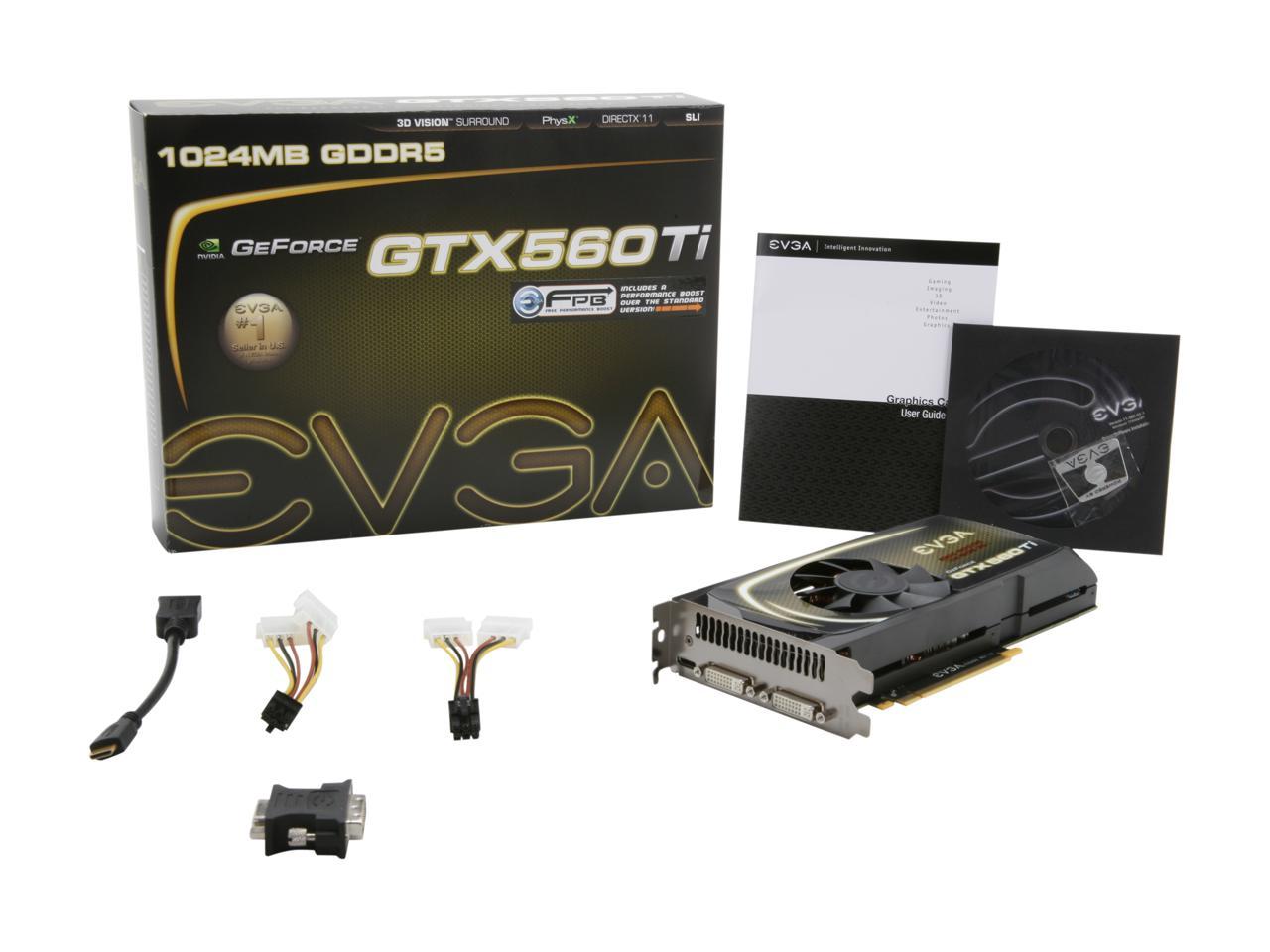 (77) Write a Review
OUT OF STOCK.
Overview
Specs
Reviews
Introducing the latest in high performance graphics accelerators, the EVGA GeForce GTX 560 Ti. This card allows you to discover incredibly detailed DirectX 11 worlds with tessellation performance that destroys the competition. Not to mention it also offers general performance increases of over 3x the performance of previous generations. It’s isn’t just all about speed though, the EVGA GeForce GTX 560 Ti gives you NVIDIA Surround, 3D Vision, PhysX, SLI and more.

Jesse B.
Ownership: 1 week to 1 month

Cons: It does seem a little expensive. But I think it is worth every penny.

Overall Review: Well, I went from an HD 6950 to this (sold my old setup and rebuilt). The HD 6950 did seem to have a slight performance edge over this card and cost me the exact same amount. This card does have some advantages over the 6950 though: it draws less power (by a good amount from what I have seen so far), It runs quite a bit cooler, and it is much quieter. Honestly, considering the performance difference is so very slight I think the pros out-weigh the cons in this comparison. My experience is based on gaming mostly, I don't do much else for graphic intensive tasks to compare the cards. For reference, my old card was the XFX HD 6950 ZNFC.

Pros: -Runs cool -Is able to play any game I've thrown at it, including BF3 Beta all on ultra 60 frames stable. -Quiet -Affordable -EVGA. I prefer EVGA for reliability. MSI Twin Frozr II may be the "best" 560 ti, but it isn't nearly as reliable in my opinion.

Cons: Can't really think of any. Drivers installed easily off the EVGA site and all has been well. No artifacting or overheating.

Overall Review: This is the KR model of this certain EVGA 560 Ti. you can purchase the AR model, which comes with a lifetime warranty for 10 more bucks. Up to you. Personally I doubt you'd need that, but hey. Also, the EVGA poster that comes with their cards is really lame.. make a new one EVGA!

Pros: Fast, easy to install, not too big, stays pretty cool for a GPU. I play all games at Max settings; The Witcher 2, Battlefield 3, Batman Arkham City, Portal 2, Crysis 2, WoW, and Diablo III. Those are the biggest ones I can think of. I play them ALL on highest settings at 1920x1080 on a 1080p 32" Sony Bravia. The only thing I turn off sometimes is Vertical Sync, other than that with 2 of these they kill every game. Oh and I play GTA on highest settings without any lag too. Has MINI HDMI ports instead of normal size. A pro AND a con because they provide a HDMI to Mini HDMI adapter.

Cons: MINI HDMI ports instead of normal size. Fortunately, they supplied an adapter for it. Unfortunately, the plugs are impossible to plug in, so I had to shave like 5mm off. Not a big enough deal to knock off an egg. Just a pain. They take 2 6 pin power plugs. Didn't come with any free games

Overall Review: $240 when I bought them. Still worth more than that! I put Arctic Silver on the GPU and they sit at 38c and 34c idle. I think they only get to 48c under load. Not bad at all!

Pros: It runs SWTOR at max settings everything enabled 57-60 average fps with vsynch enabled as well. It's an extremely silent card.

Cons: Seems to run a bit hot in my case, I have alot! of airflow too. 2x120mm 3000rpm maxed fans for top outtake. 1 antec 620 waterpump and a pull/pull config pushing out air at the top of the case as well for my cpu. 2x bottom front 120mm intake fans @ 2000rpm. Lastly one huge 140mm side intake intaking air right on the card at 1200rpm. Yet when gaming this card his high 60's to 70's. I have yet to set the fan to max though. This seems rather high to me but who knows.

Overall Review: I'd by a second one for sli if they'd lower the cose to $170 and if the temps stayed safe.

Pros: Here are the frequencies where my card crashes =) Core: 953MHz Memory: 2550MHz I used MSI Afterburner and Kombuster to OC to 925 & 2250, and it runs like a champ (even with only a 500W PSU, also driving my 3.0GHz 65nm C2D). That SW is also great, since it lets you set the temp vs fan speed curve. The card's fan is sufficiently quiet; when it speeds up to support 3D stuff, it becomes audible in a quiet room, but chances are you're playing a game and the game sound easily takes over.

Cons: Not necessarily a card issue, but a driver issue. Crashes almost every day 1-2 times. Driver stops responding, then recovers. Not a big deal as it recovers in 3 sec, just FYI.

Cons: None so far. Computer has been on for a week straight without an issue.

Pros: I've had 3 eVGA 280 GTX SLI'd since the day it came out. The performance was awesome. But I knew it was time for an upgrade due to few issues I've had with the 280s. It took me about 2 months of reading countless reviews on these 560s before I bought one. I needed cards that will blow any graphics apps without having to overclock the frequency and fan speed and at the same time not break the bank. I've considered the high end cards but I thought it was way too much for one card -- no offense to the high-end folks and more power to y'all. But really, if you're in a budget and not having to sacrifice performance, this card is the it. After a week of heavy-heavy usage, this card is still screaming which made me feel very accomplish for taking the time before purchasing. In fact i feel happy about the results, so I thought I'd get a 2nd card for the SLI setup. It's been a month now, both cards are still screaming strong.

Overall Review: You don't have to take my word for it, just try it out. Anyways, you don't have anything to worry about because those kool kats at Newegg will take care of you. Cheers!