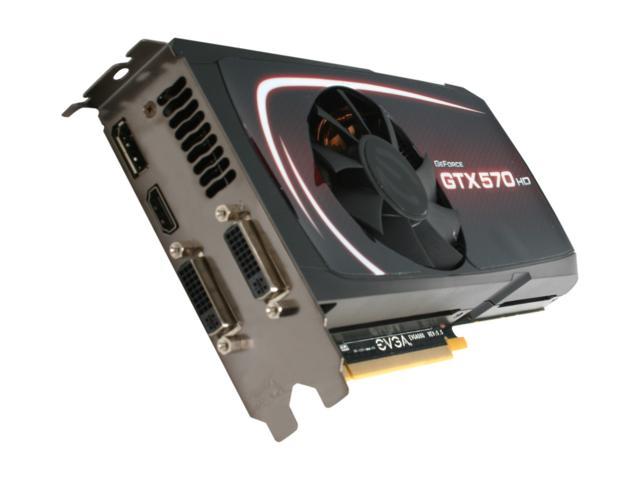 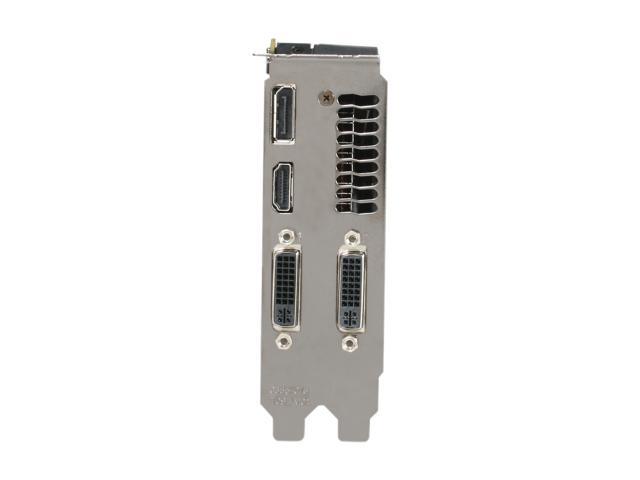 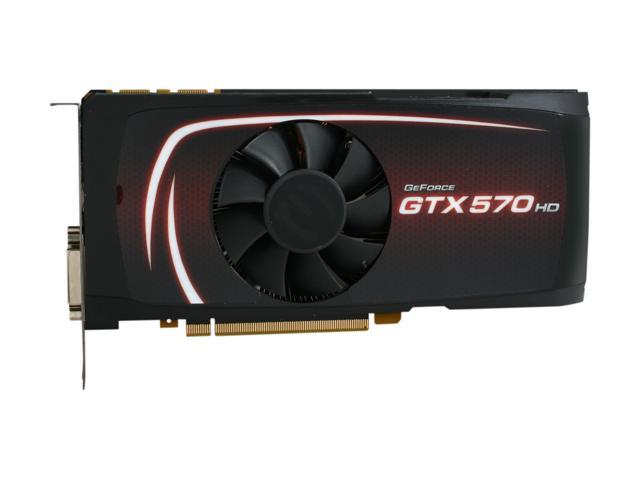 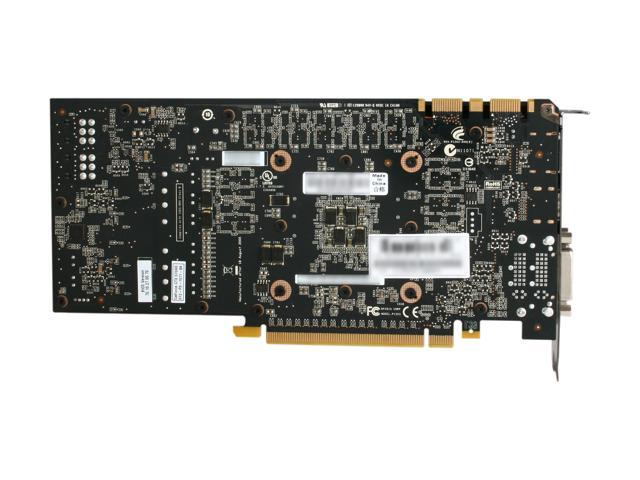 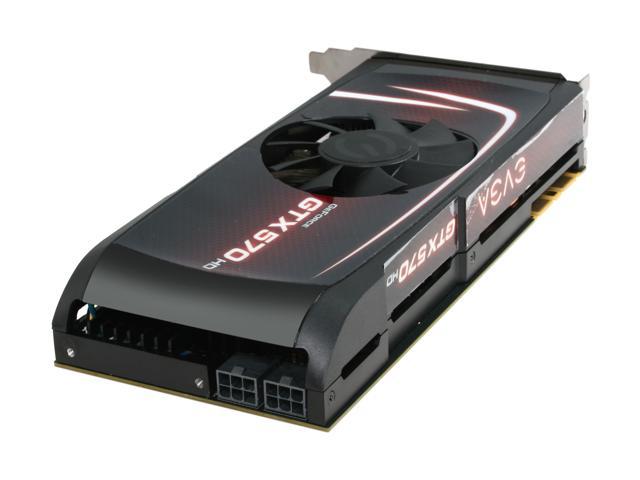 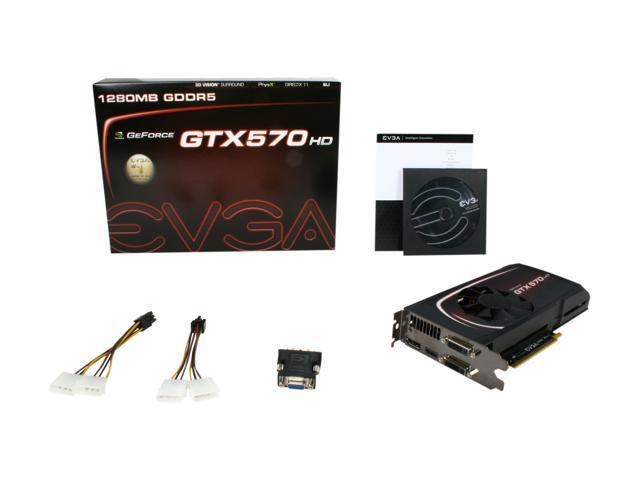 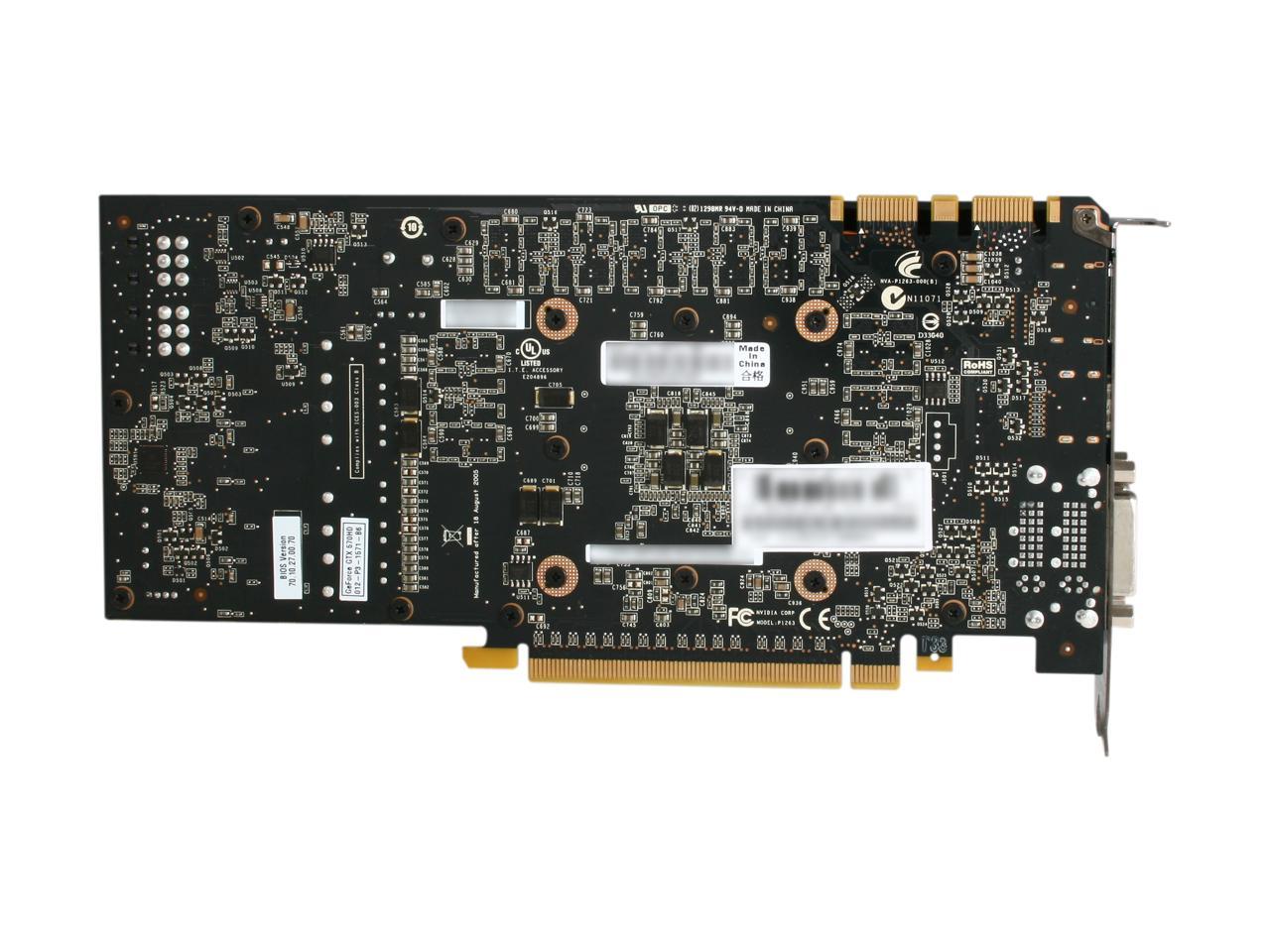 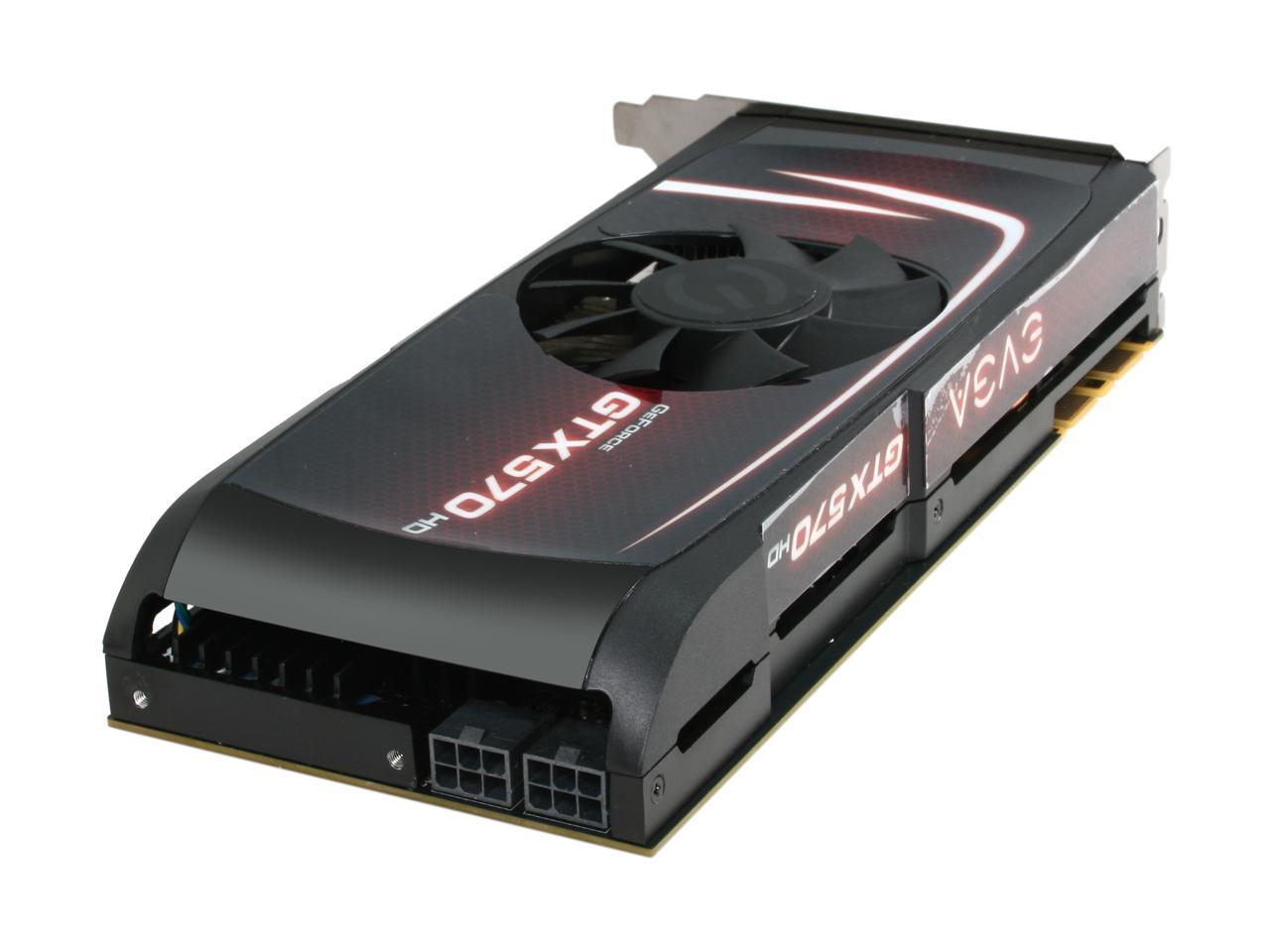 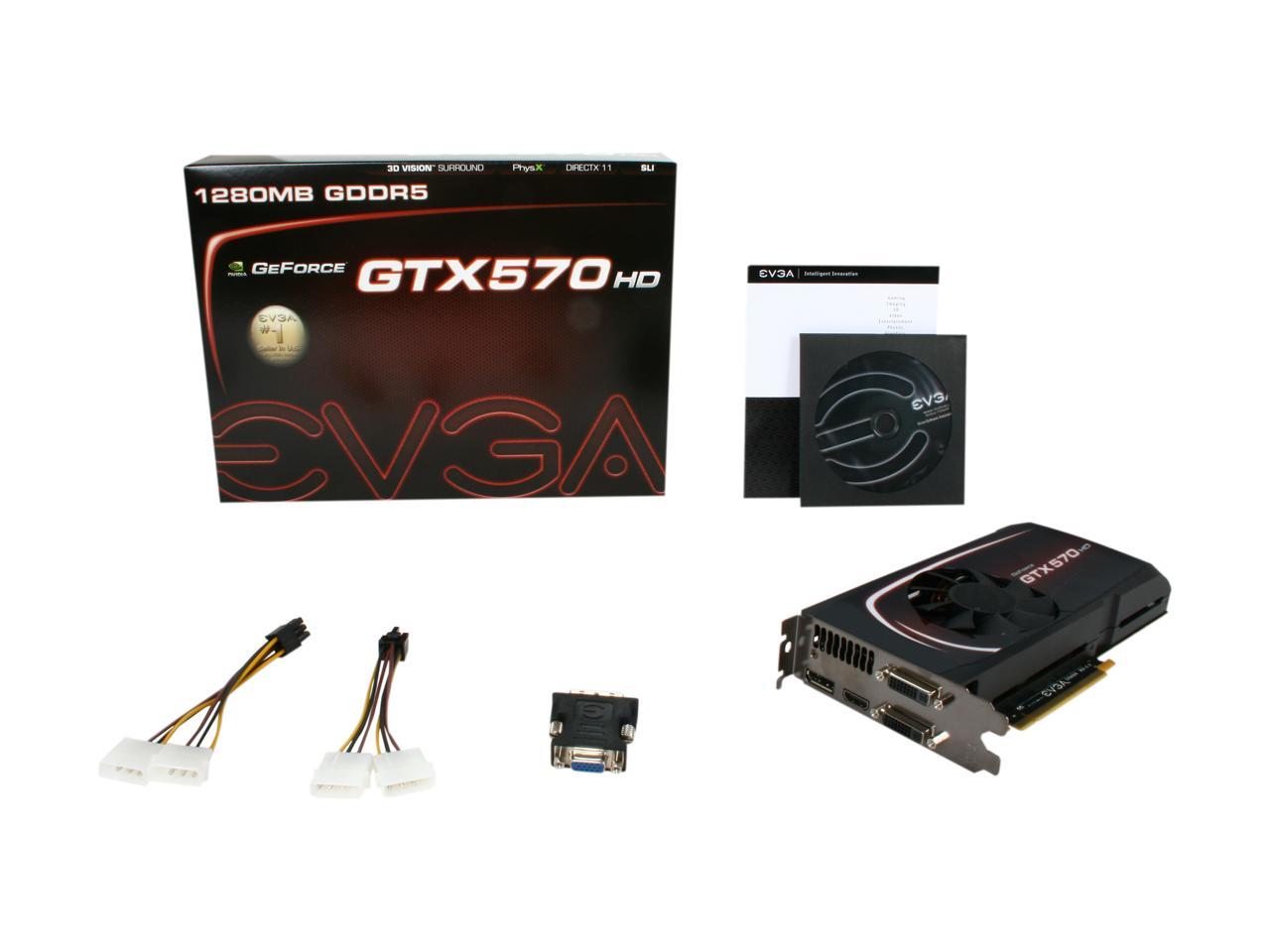 Pros: An excellent high-end card from the 2011 year, the performance will reign sufficient for at least the next 3 or 4 years. Practically a steal now that the Kepler series of cards is out (GTX 670, GTX 680). Though Kepler is much much better, there is no Kepler card that delivers the performance level of the GTX 570 (yet, at least). Unlike the EVGA GTX 560, the shroud on this one feels very solid. It has a heat spreader applied to the RAM and VRMs. Power consumption is high, but it feels lots better than the original Fermi parts (GTX 470, 480). Power scaling is in full-force, and the chip scales up and down depending on how bad the load is. For example, when playing Torchlight the GPU does not run at full-speed and basically sips power. Playing Battlefield, on the other hand, will push things up several notches. In short, it is not all-or-nothing, and is very smart about power use. Fan is quiet and effective.

Cons: The Kepler series is significantly faster and consumes much less power than this card. However, these 570 cards are priced with this information taken into account. If you think that the current price for the GTX 670 is too high, then this card wil get you 80% of the way there for 150 bucks less. However, the GTX 670 is considerably better than this in almost every way, so grab that one if budget is not an issue. Gets quite toasty, but it is nowhere near as bad as the GTX 470/GTX 480 cards. I've measured temperatures in the low 80s during heavy gaming stress. I have not measured during stress tests like Furmark -- I am of the opinion that those tests can damage hardware.

Overall Review: Nvidia is launching a GTX 660 Ti soon, presumably with a Kepler part. This will likely be priced around 350 or so, and will probably equal the GTX 570 in performance and surpass it in efficiency. At the current pricing for the GTX 570s, it seems like retailers are trying to liquidate them. Pick one up before they get sold out! We are talking tip top performance that was worth 350 bucks just a few months ago, and the cards are selling for 100 off right now. Get one before they are gone for good!

Pros: Great power, perfect for gaming. I was able to play games at max without any issues. The Witcher 2/Deux Ex both played perfectly well at max performance, no framerate issues or anything. It connected easy, fit in my case well enough, and generally had no issues getting it to work/start up.

Cons: Within 3 days, it started fading. My perfect performance/framerate issued tumbled down, and I had framerate issues, the AA was screwing up horribly, texture pop-in and lighting-pop-in abundant, basically every graphical issue one might expect happend/progressively got worse over the course of 5 days or so. I had to RMA it. The reason I'm giving 5 stars is because the graphics card itself is amazing, and 5 star quality. Sometimes you get a part and it doesn't work, that happens, you can't expect to always get a part that works perfectly when it comes to computer hardware. I won't dock a point (or more) simply because the specific one I got was faulty, when the product itself is very, very good.

Overall Review: I purchased a whole new computer (processor, mobo, ram, monitor, case, everything) when I ordered this card, and this is the only piece that was faulty. It is to be expected when ordering so many things, how many times have you ordered a stock pile to find a bad egg? It's nothing new and not the product/Neweggs fault, it just happens.

Pros: I purchased parts for a new i7 build but the motherboard hasn't arrived yet, so in the meantime I replaced my older build's (E8400@3.6GHz) EVGA 8800GTS G92 with this GTX 570. Every single one of my games now runs so much better (except Black Ops is still inconsistent, but that's down to Treyarch). CS Source (orangebox engine) went from 60-100 fps to over 250 consistently, BFBC2 now runs flawlessly maxed. I can't stress enough how limited by gfx card games are these days, if you have a decent enough CPU (and the E8400 is still doing OK with a mild overclock). Other notes: These tests were done at 1680x1050 res as I only have a 22" monitor.

Cons: The KR part was the only available on Newegg when I bought it, and as stated in another review only comes with 3 year coverage and no step-up unless you purchase a separate warranty. However this is an administrative thing and in no way detracts from the quality of the card itself. Plus, I refresh every three years so will surely buy another EVGA card then.

Overall Review: Will consider getting another for SLI.

Pros: Support, support, support. I wrote several members of EVGA's product team. I expressed to each one what I wanted to do with my card (Photoshop extensively, but have a great gaming experience in between). I received detailed honest answers about what to expect from my card from each person I contacted. The notable thing about these contacts was that each person's answer mirrored the others. I am glad when a company's employees all share a similar belief and level of tech knowledge rather than a collection of waring factions spouting slogans and marketing speak. Matt responded to me personally as he does here on the Newegg feedback section. I am only one customer but he made me feel important, as if my one purchase meant something to EVGA

Cons: The card only has 1.2 gigs of memory. If this card had two, I am sure it would extend the card's life but a year or more.

Overall Review: This card provides beautiful in-game graphics. Batman Arkham City and Arkham Asylum both look tremendous. With my Radeon 5850, it looks more like water color painting, but with the EVGA 570, it has a more detailed appearance and depth. This card has given me ZERO issues. Read the EVGA forums, make a list of others' issues and the ensuing solutions and you could save yourself some configuration issues. Most are caused by people simply not reading the documentation included with the product and its utilities.

Pros: Great performance for the price. The fans are quiet and overheating is not an issue at all. you dont need to OC, runs games fine on ultra settings. NVidia control panel>ATI's CCC

Pros: It's an amazing card, Got it for my new pc build. It runs all my games on max settings with no lag at all, Crysis 2, MW2, BFBC2, etc.

Overall Review: Might end up getting another to sli. Main reason for buying this card is to play BF3. Buy it.

Overall Review: This is going to my video card for a while. Might add another one for SLI depending on how prices are in the future. In some games, this card scales almost 100% in SLI. Also, if lifetime warranty + step-up is important to you, go for the 571-AR, not this model (571-KR). EVGA is a great manufacturer. I used to have their GeForce 6800 GS back in the day, and that thing performed valiantly!