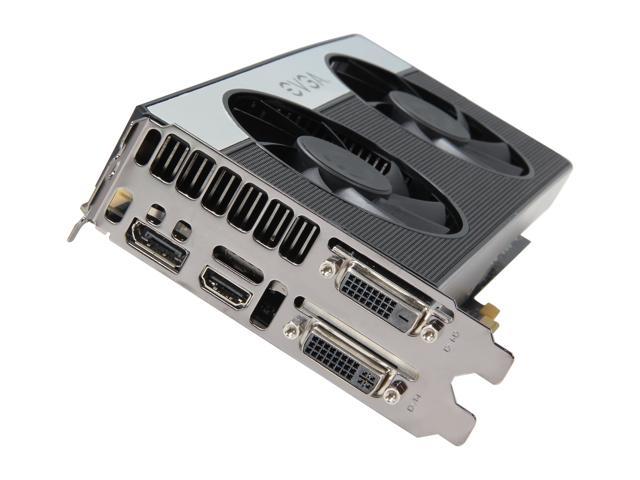 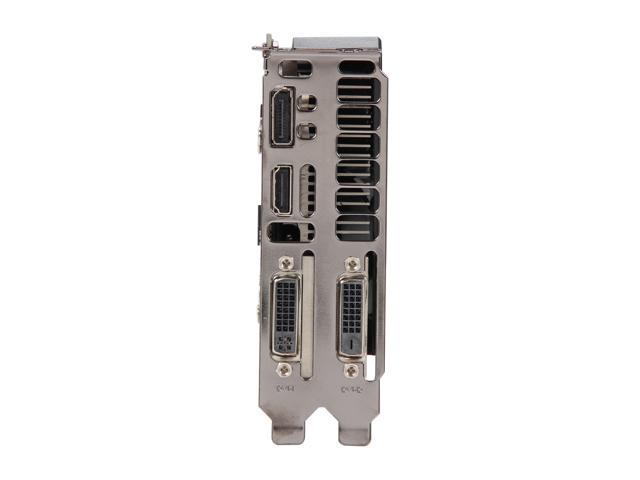 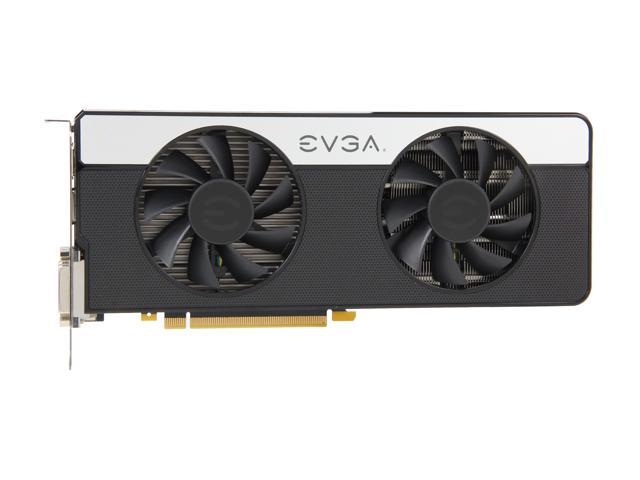 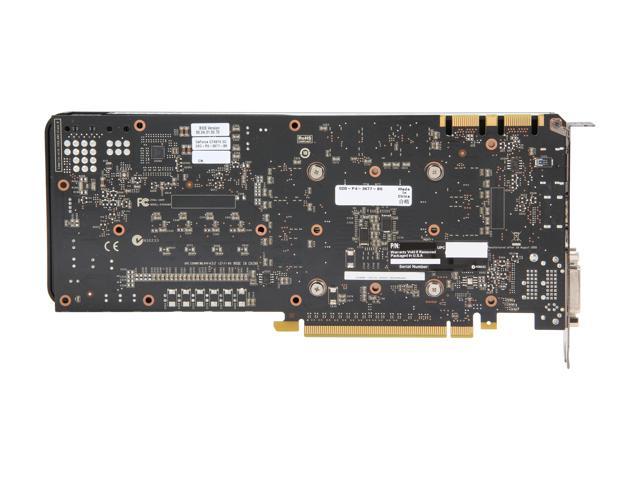 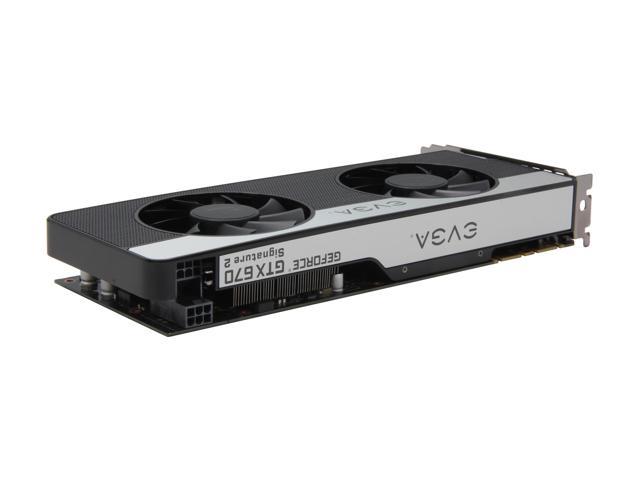 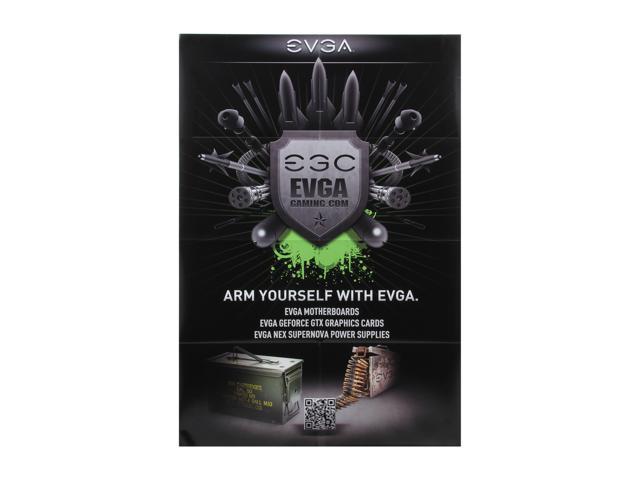 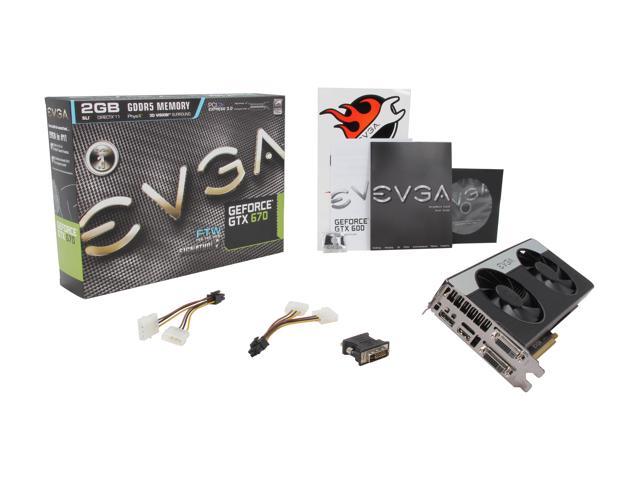 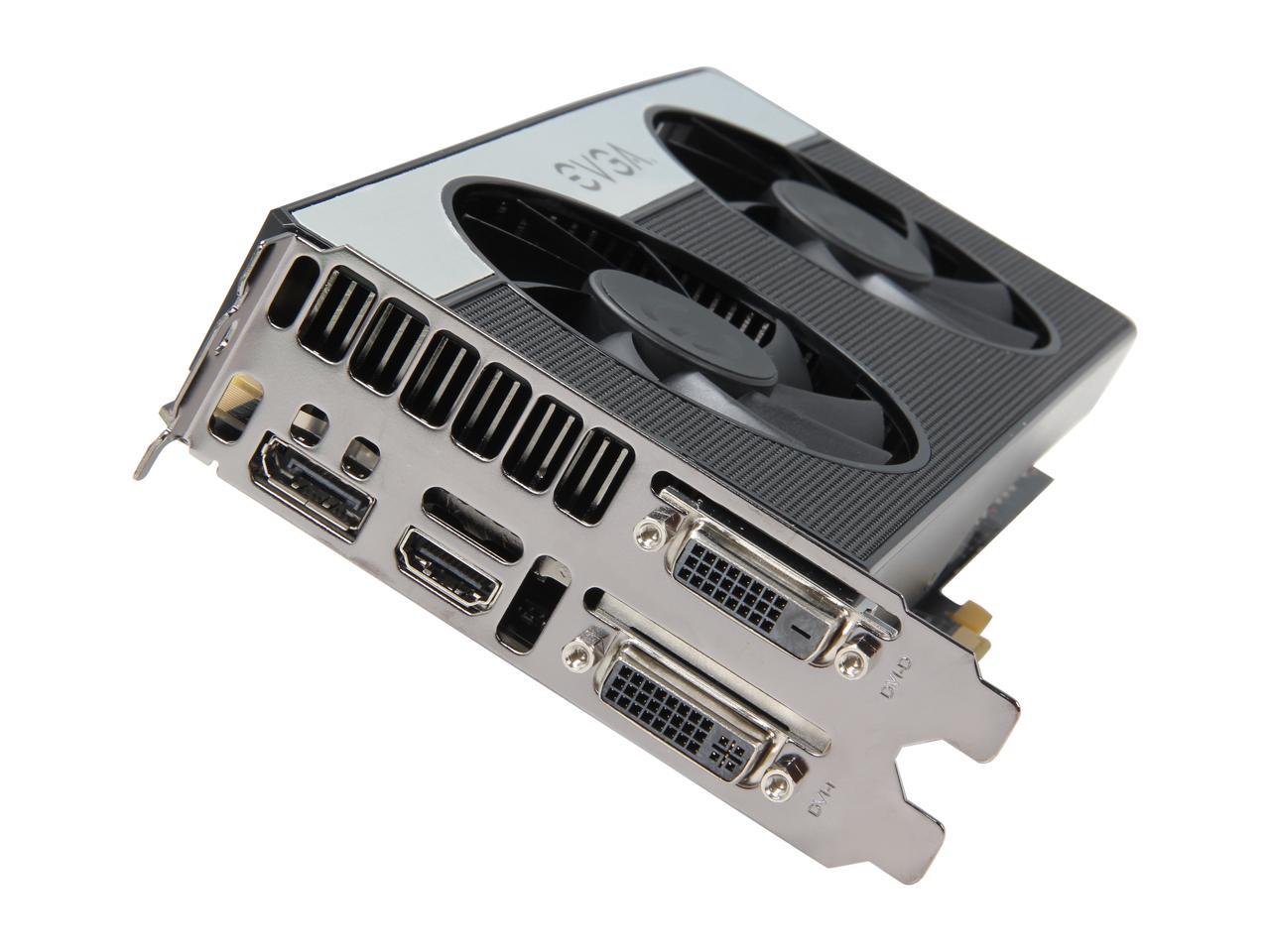 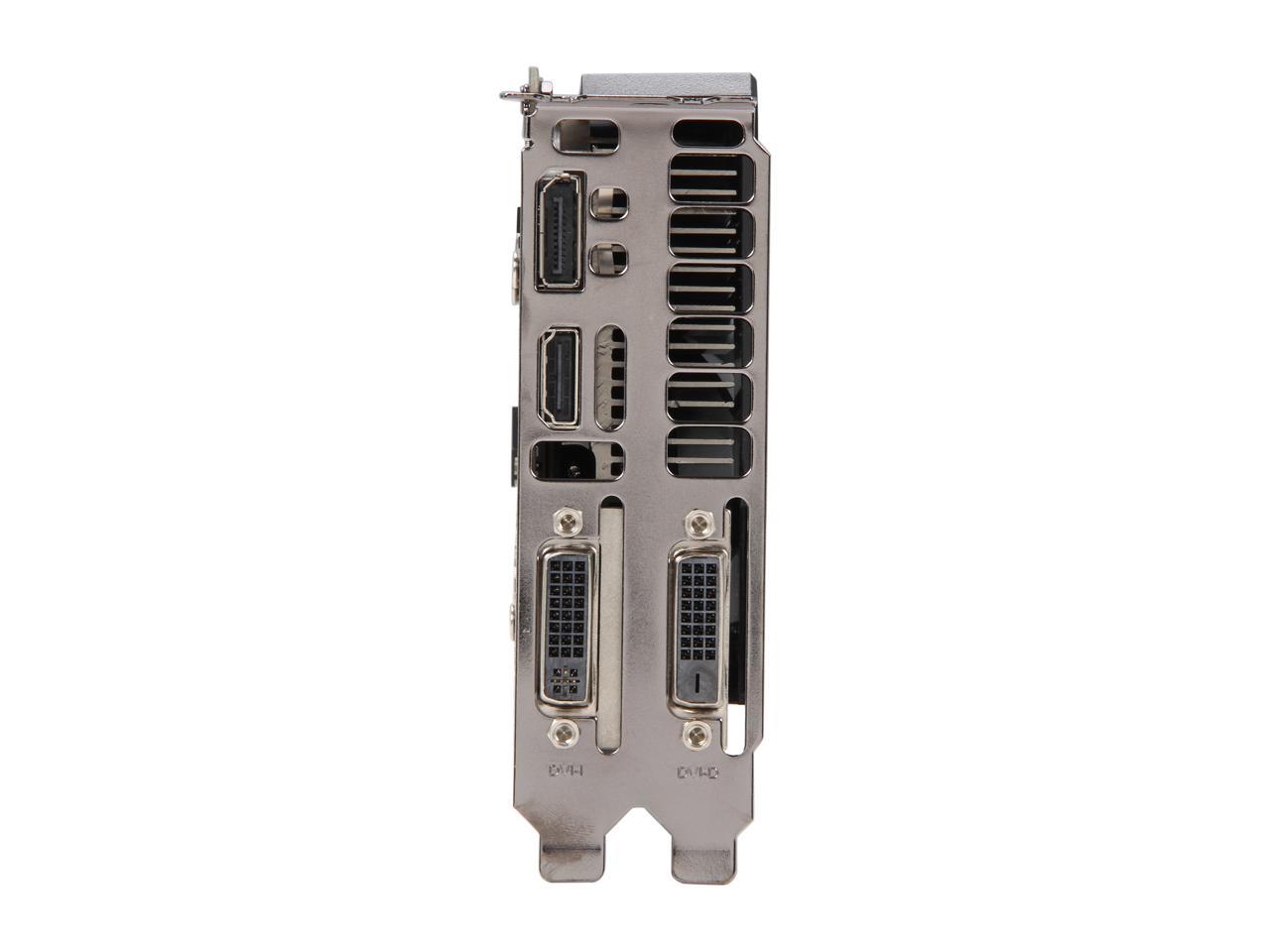 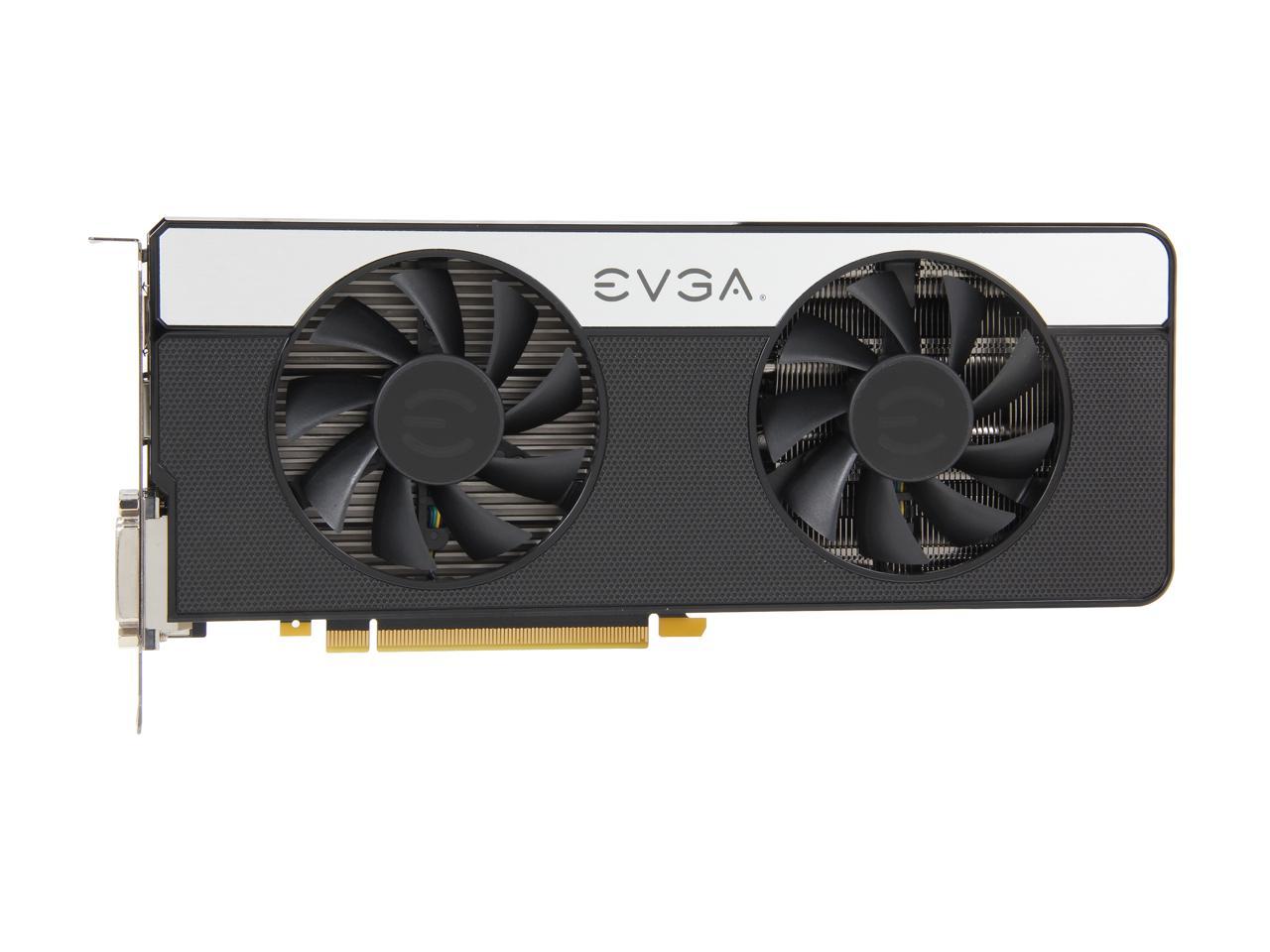 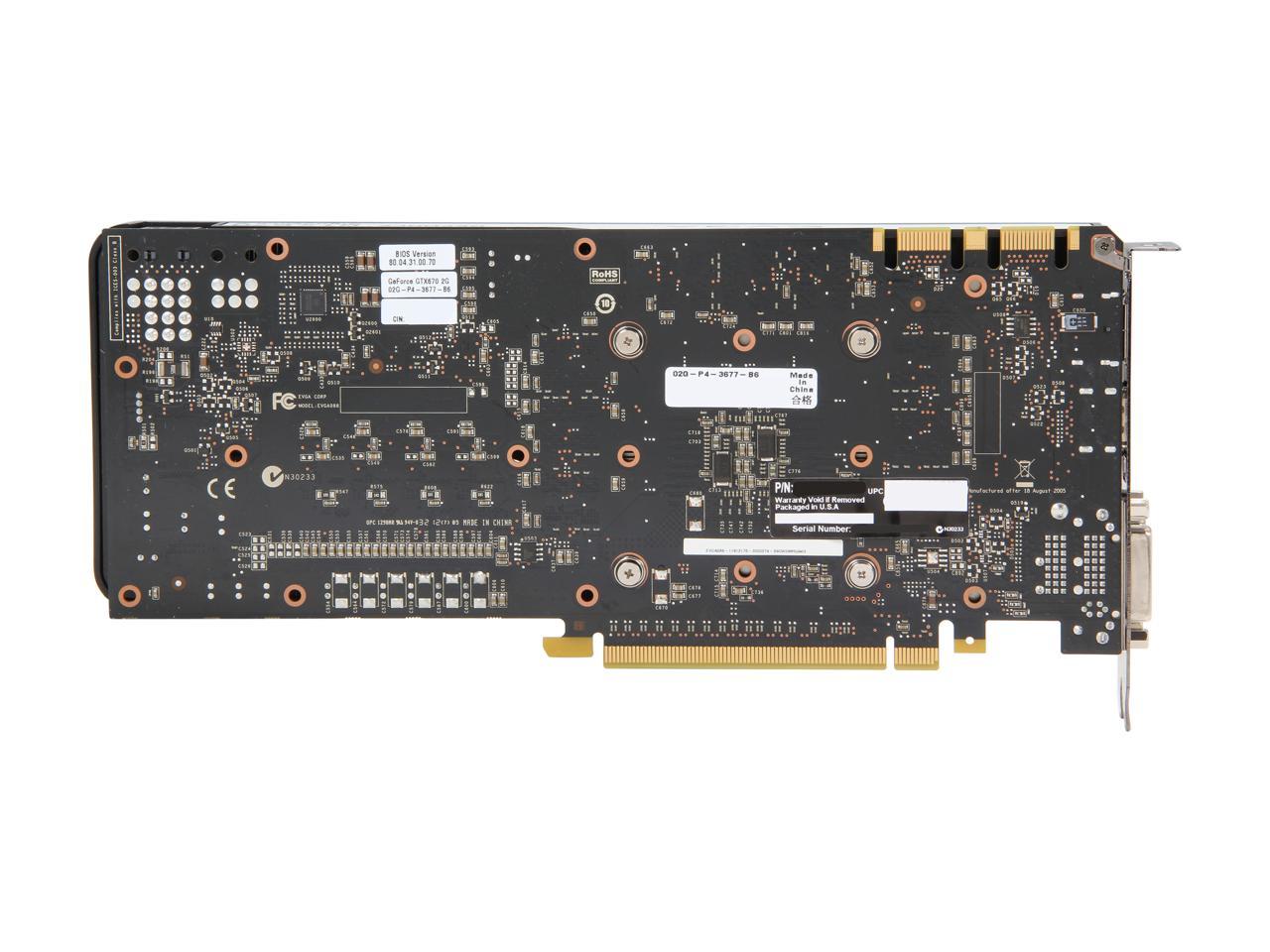 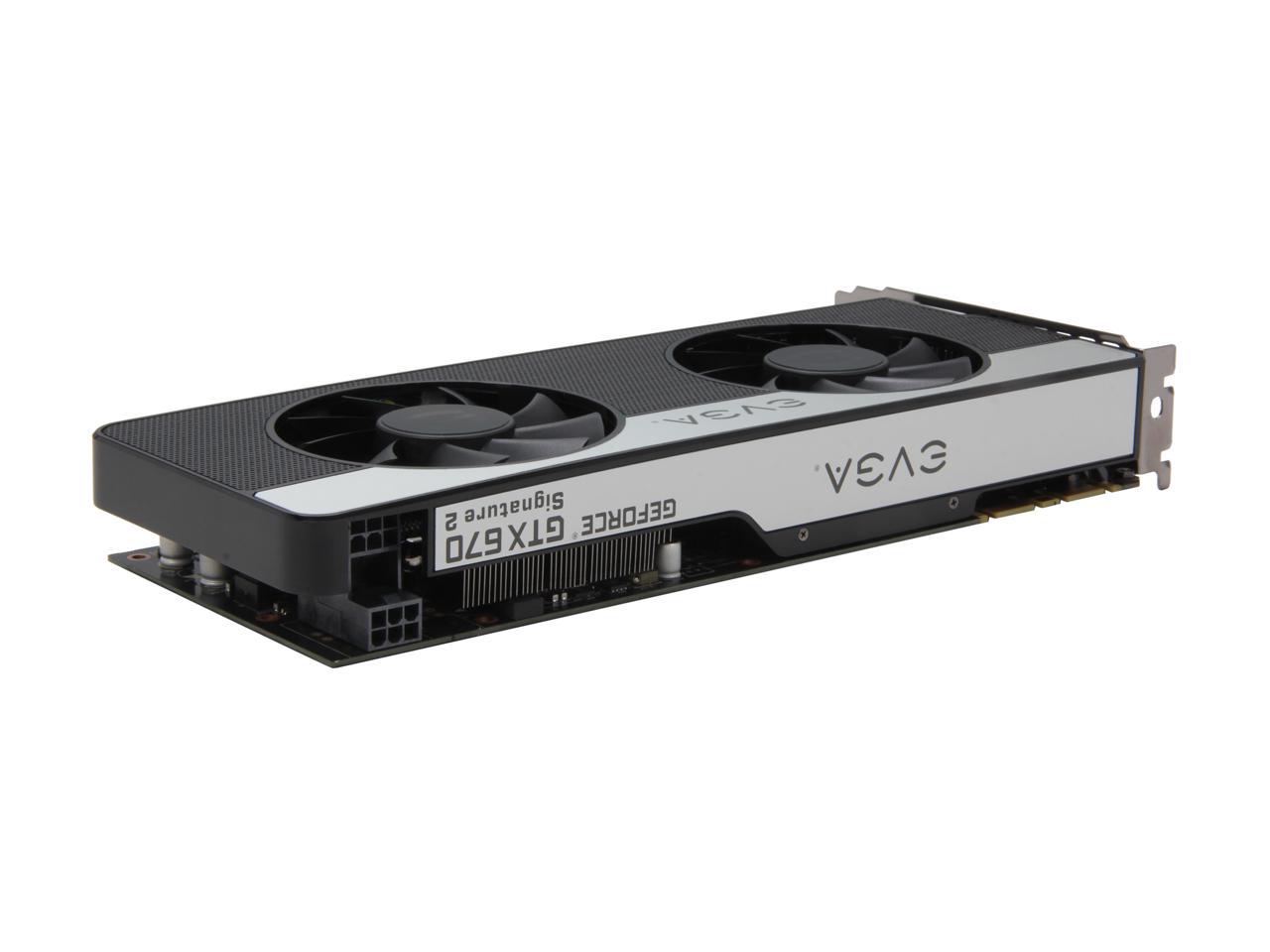 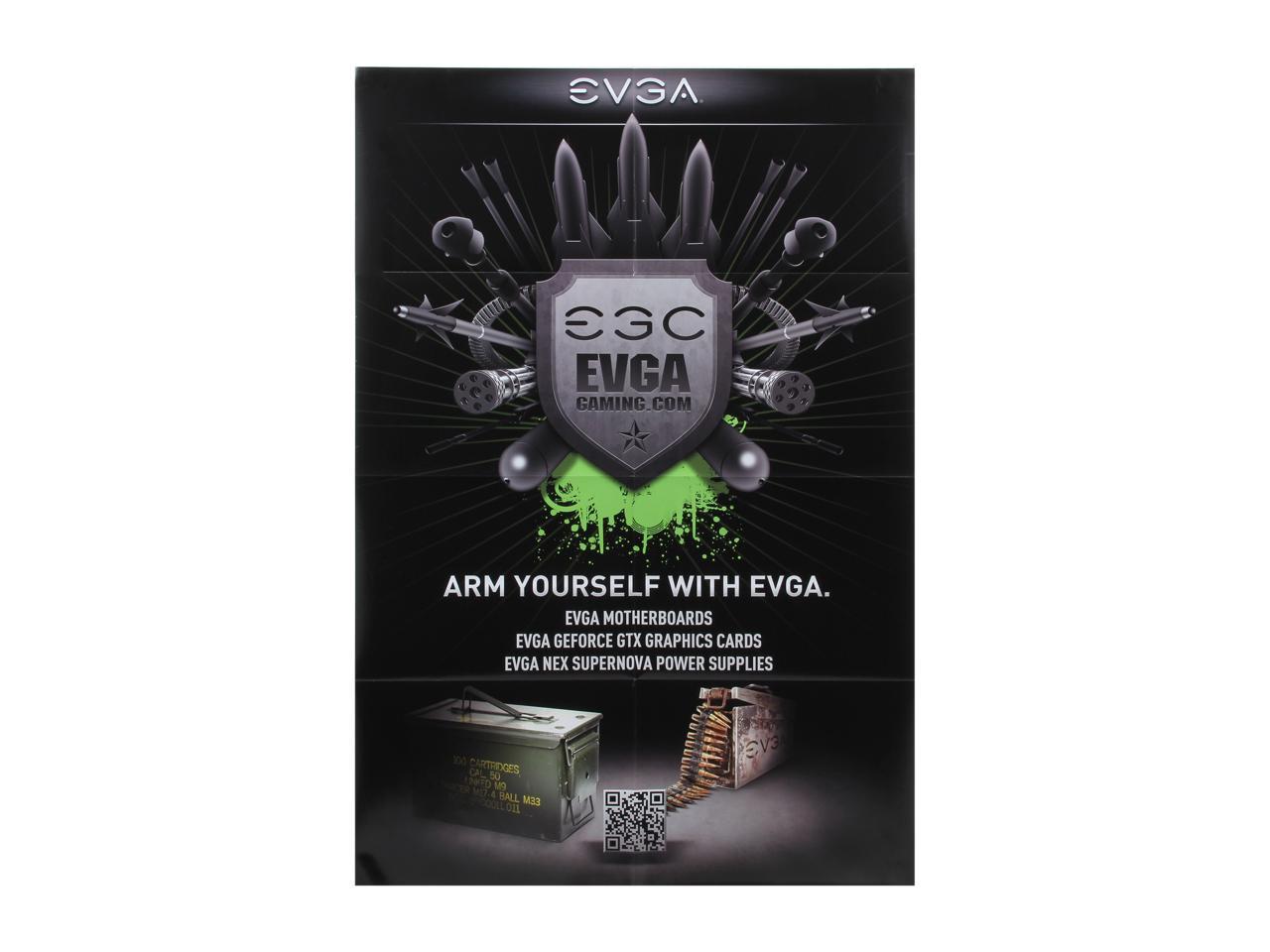 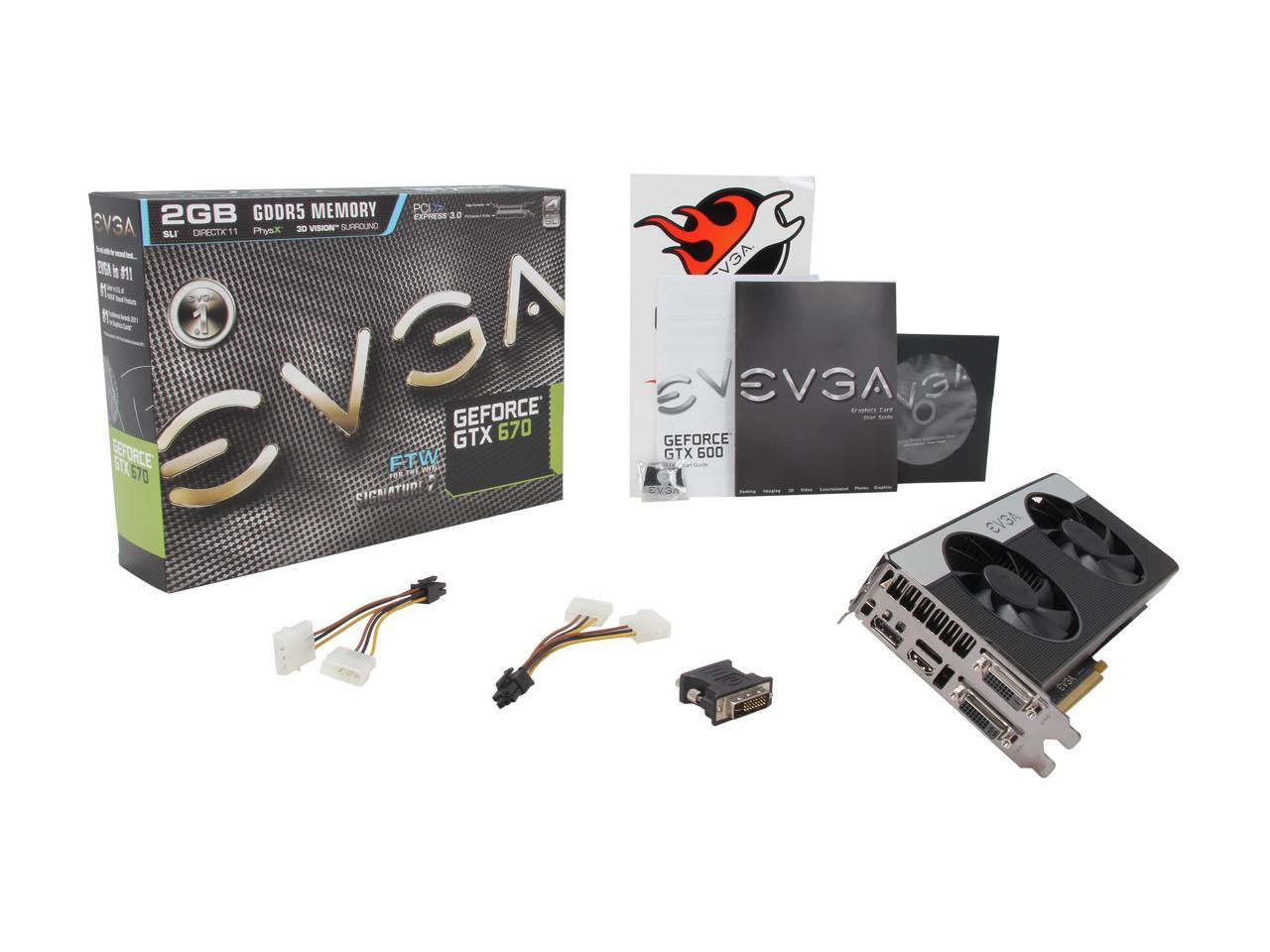 Pros: his card is replacing another outstanding EVGA video card, mainly because my son's old 8800gts decided it was time to retire after 7 years running games almost daily. I figured what better time to upgrade MY system as well as my son's...though this 670 is now in an i7-3820 system vs. the Phenom II X4 965 system the 570 was in. I'm good for another 2 years, at least. This card doesn't disappoint. I'm now running BF3 on Ultra settings, 2xAA @ 1920x1080 (no motion blur), and getting mid to high 70s on heavily populated vehicle maps. My 570 system averaged mid 40s on High settings. Keep in mind the 570 also had the Phenom vs. the i7 I've paired the 670 with, so it's not quite that dramatic of a performance increase between the two cards, but it's definitely faster. Significant temperature decrease over the old card, too. By about half. Even cooler than my older gtx 260 which is installed alongside this 670. I'm looking at 31 degrees for the 670 and the 260 is at 49 degrees (via EVGA Precision), and the HDTV I've connected to the 260 for video streaming isn't even on right now. My 570 topped out at 100 degrees in BF3 a couple times though mid 80s was more the norm...60 is average for the 670, hitting as high as 62 on occasion. Less power consumption. It's still up there, but uses less than the 570 it's replacing. Not sure about the 260 though, probably not, I'll have to look it up. EVGA has outstanding support. I've RMA'd two cards with them during ~8 years of doing business with them. Never had a problem. Fast, knowledgeable staff. You don't even need to call them, no hassle, no wasted time. Fill out an online form describing the problem. Wait less than 24 hour, and you're all taken care of. Experiencing that outstanding customer service, I don't even think of buying a different brand.

Cons: Let's be honest. It's expensive. Even if you're well off, 400 bucks for a video card is, well, 400 bucks. (For the record, the Diamond Monster 3D 3dfx Voodoo 1 video card I bought in the early 90s, initially for the sole purpose of playing just ONE single solitary game at that time....GLQuake...was 325 bucks...just to look at it from another angle.) Oh and it doesn't run BF3 @ 200 fps w/ Ultra settings. Google it if you're skeptical. Though that's not really a con, as it doesn't even break a sweat running everything you throw at it.

Overall Review: I noticed some slight exaggerations in some reviews, (one of which is the reason for the 200 fps reference in the Con section. I don't understand why people do that. Saying it isn't going to make it so. The number one reason I upgrade every two years or less is due my Battlefield series addiction. There is no way this card by itself is going to give you 150-200 fps in that game on Ultra settings. It's possible with a 690, NOT with a single 670, and that's if you settle for a 1680x1050 resolution. A 680 can't even do that. You can expect about half of that figure above, and that's at 1920x1080 NO AA, Ultra. I doubt even 2 670s in Sli will hit 200 fps at those settings.

Pros: This card is eating up anything I throw at it and laughing back in my face. The extra fan is keeping it extra cool as well. I don't even hear this thing, although my computer fans are cranked up, so it wouldn't matter anyway. All in all, I couldn't be happier with this choice. Came with 2 free games (Borderlands 2 and Assassin's Creed 3) and $20 rebate, so even better.

Pros: The capabilities this card can perform are remarkable, the sheer speed and quality is remarkable especially at the price. It may be a bit of a higher end card but at the price it surely allows you to be the Enthusiast you want to be! performance with this, an I-7-3770k, and an SSD is just beautiful. The computer I made with these specs and more, literally boots up from power press to posting. I have an Asus motherboard with a 3 Second delay timer, and my computer Still boots up in 6-11 Seconds. The interface for the software that EVGA gives you is amazing as well. They keep their software very updated. Every time a new game gets released there is a performance update for the graphics card. Also makes over-clocking easy. I highly recommend you get this product if you're an enthusiast looking for some high end gaming!

Cons: Absolutely no cons that I have come across yet. I guess the only con is that it does not come with a cookie...

Overall Review: I recommend this if you're looking to do any kind of, Graphic editing, Game Dev, Programming, High end gaming, and more...

Pros: This is my first build, so you have to understand that I'm upgrading from 8 year old console hardware to a high-end monster like this. -Absolutely decimates any game coming out of the console market, graphics-wise -2GB is more than enough. I'm able to max out GTA IV with ENB at 60fps using only 1200MB! -Maxes out pretty much any game I throw at it. -GPU boost is helpful to a newcomer like me who doesn't know how to overclock

Cons: -Really big, but that's just as much do with your case size.

Overall Review: I'm glad I finally made the jump from consoles to PC. I absolutely adore this card and don't see myself really needing any big upgrades for a few more years.

Overall Review: My old GTX 275 had the same cables. It was merely unscrew the old card and insert the new! Too easy! Newegg gets an extra egg. I ordered the card on Thursday. Friday morning my email received order tracking. I clicked and it already showed out for delivery. The surprising part is that I chose the basic free 4-5 shipping! Newegg rocks!

Pros: This card allows one to play games at their highest settings.

Overall Review: Running a couple of these in sli. Unbelievable. After years of severely lowering settings and resolutions in order to play games from the last few years at barely playable framerates...well, I am not disappointed in this purchase.

Pros: i haven't overclocked this card at all and it still plays all my games maxed out i couldn't ask anything else from it right now i also like the design compared to reference i was stuck between the 670 and 680 im happy with my choice and the money i saved

Pros: What's Up Yall!!? Got my hands on this EVGA card and figured it is good enough to write a review here where I purchased it! Pros: * High quality build * Adapters are even sleeved * Extremely High performance Boost Clock 1333Mhz * EVGA has the best customer service in the industry! I have been testing many different GTX 670s and after getting a refund from the manufacturer of the last 670 I tested I decided I'd give EVGA a try. So far it has been the most powerful out of the box boosting up to 1215Mhz without any overclock. This thing also overclocked higher than most 670s / 680s I've tested pushing 1333Mhz on boost.. EVGA has put a contender out on the market and it is begging to be noticed. Great Product EVGA - I can't wait to see your 700 series version of this card ;) ~ Now That's What's Up!!! ~ IamApropos

Overall Review: I'm a computer parts and build consultant and I've had the ability to test quite a few different 670s on the market. I have and will be recommending this card to anyone in the market for a 670. Not just because this card is one of the best performing 670s I've ever seen but because its coupled with a company that provides the best customer service in the industry. Great job EVGA and thank you!