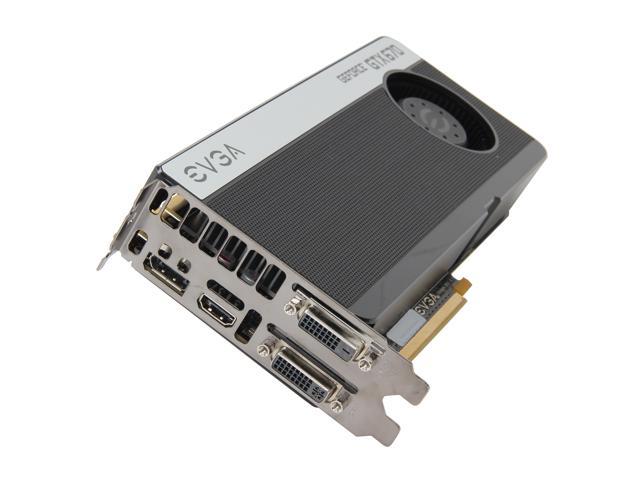 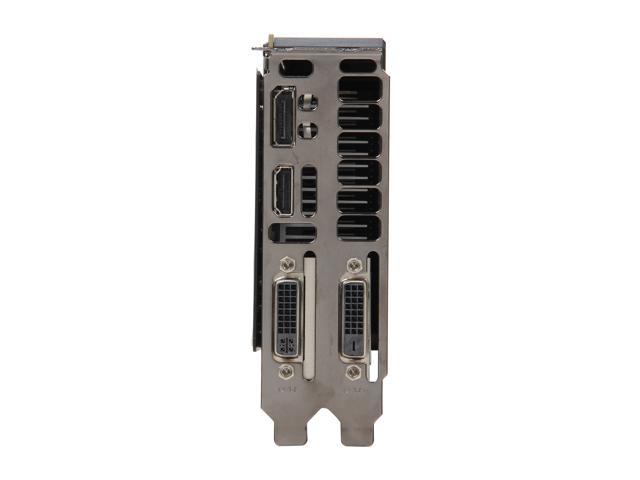 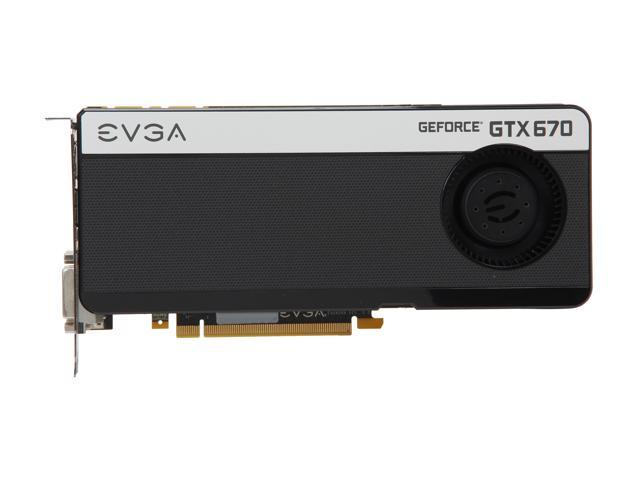 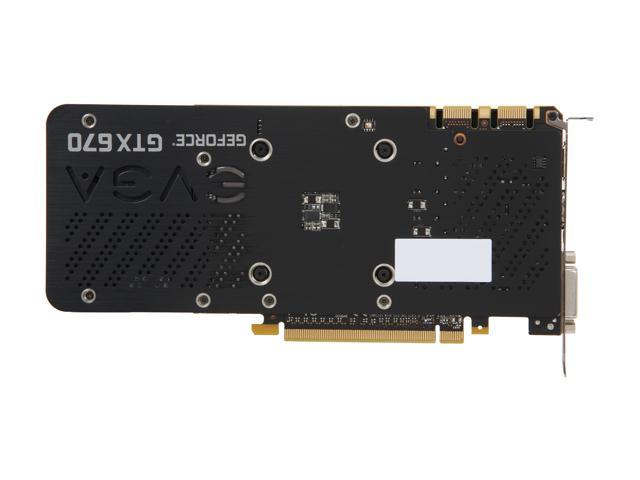 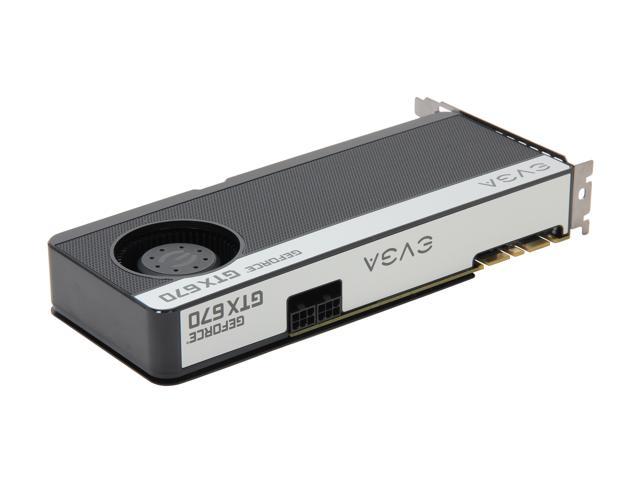 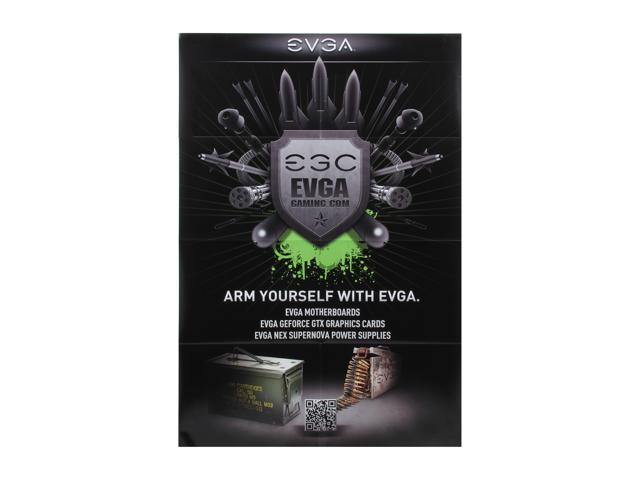 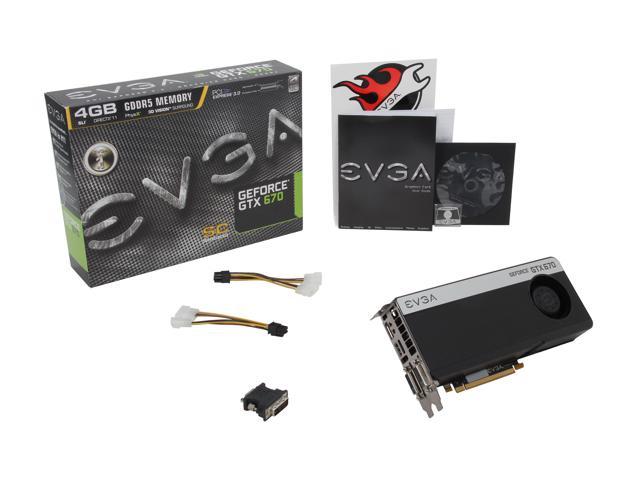 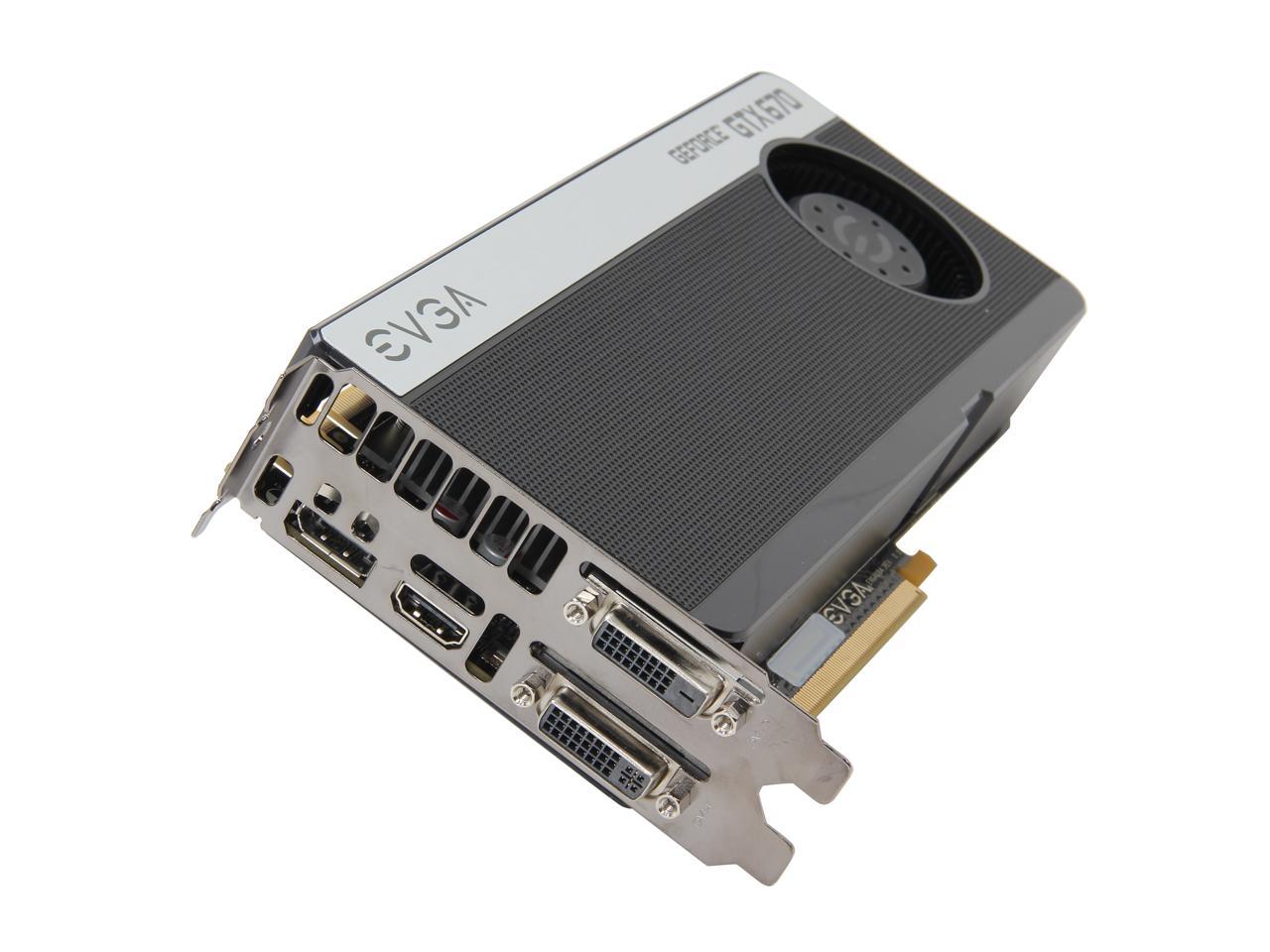 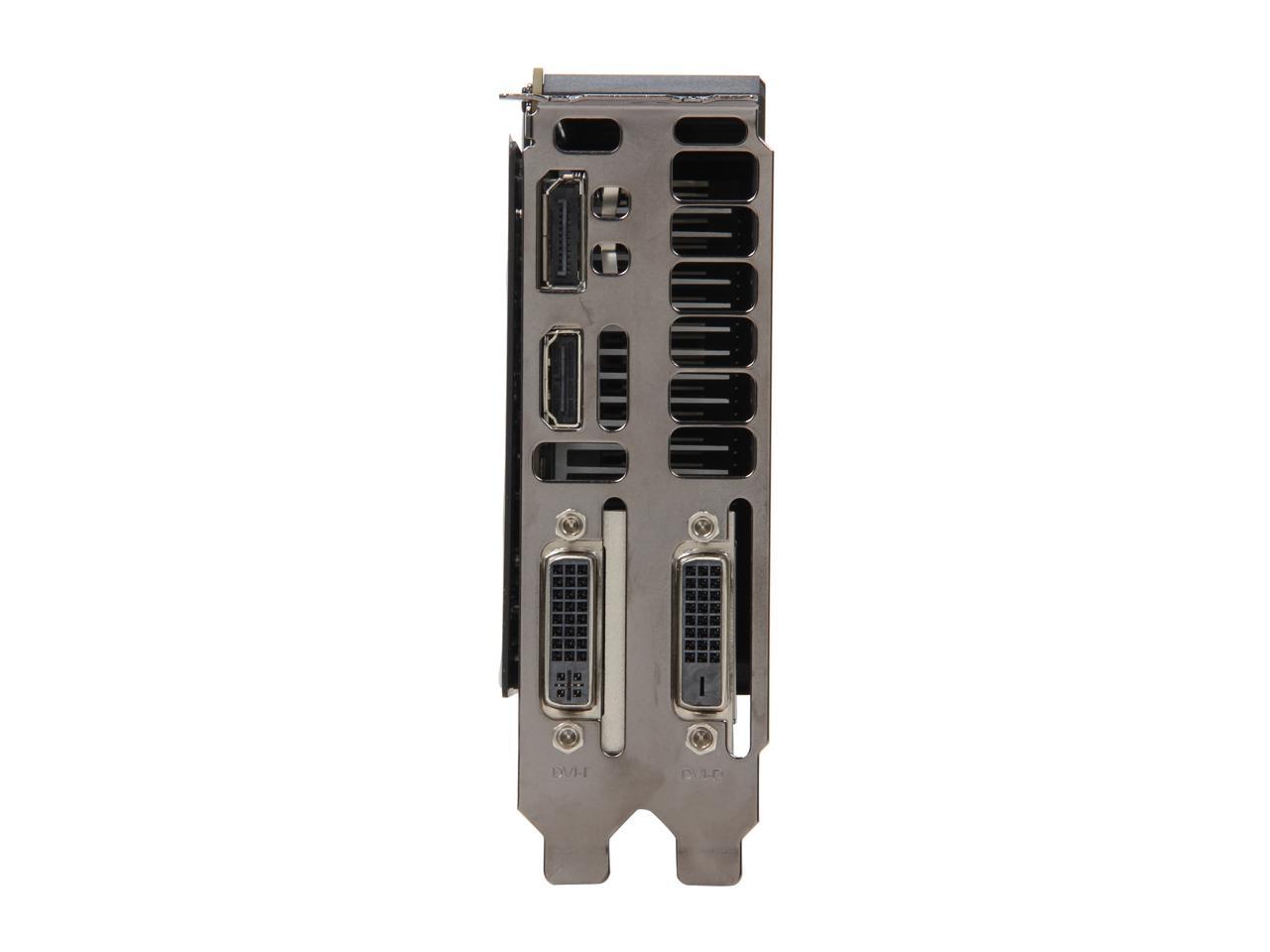 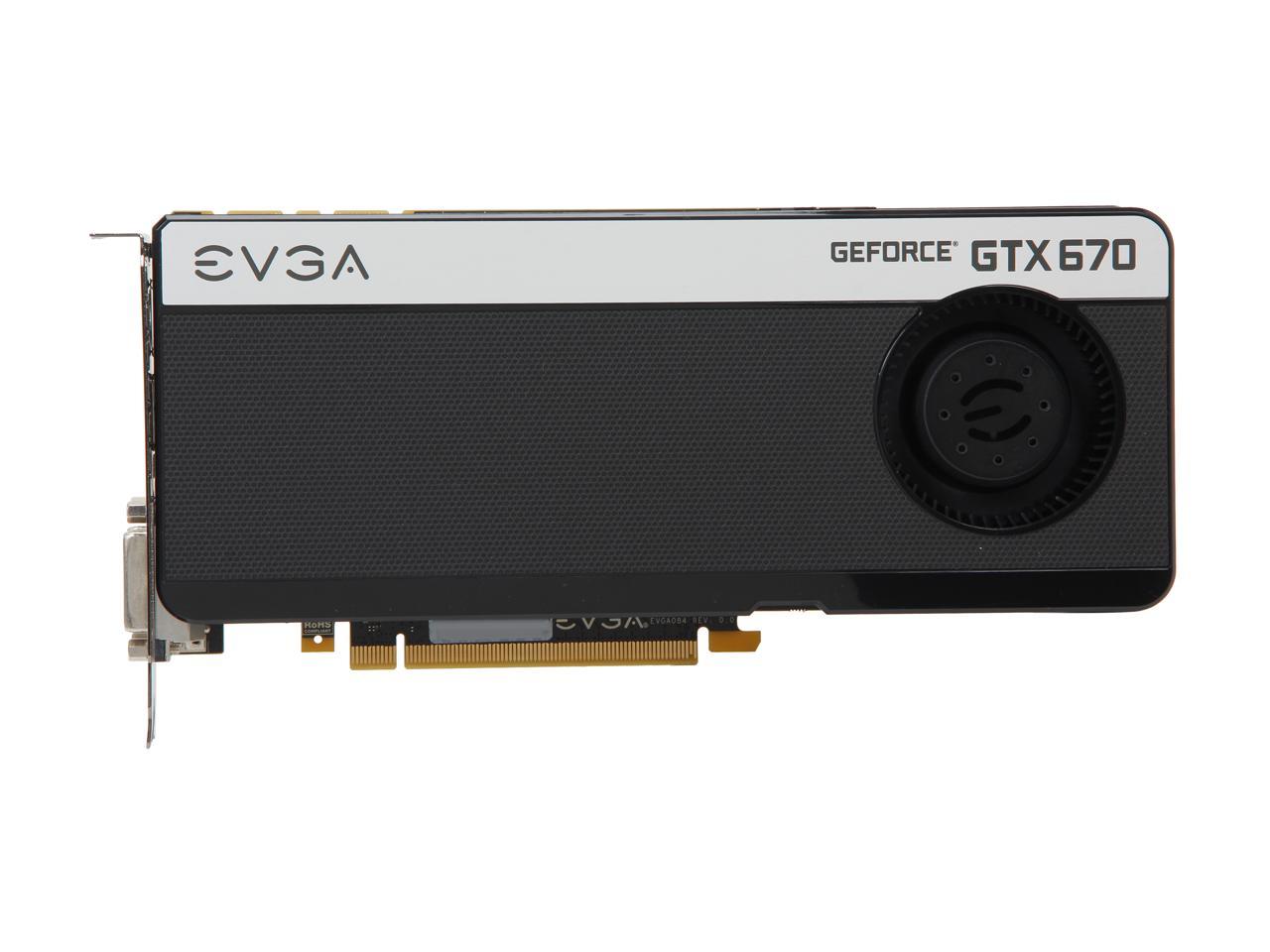 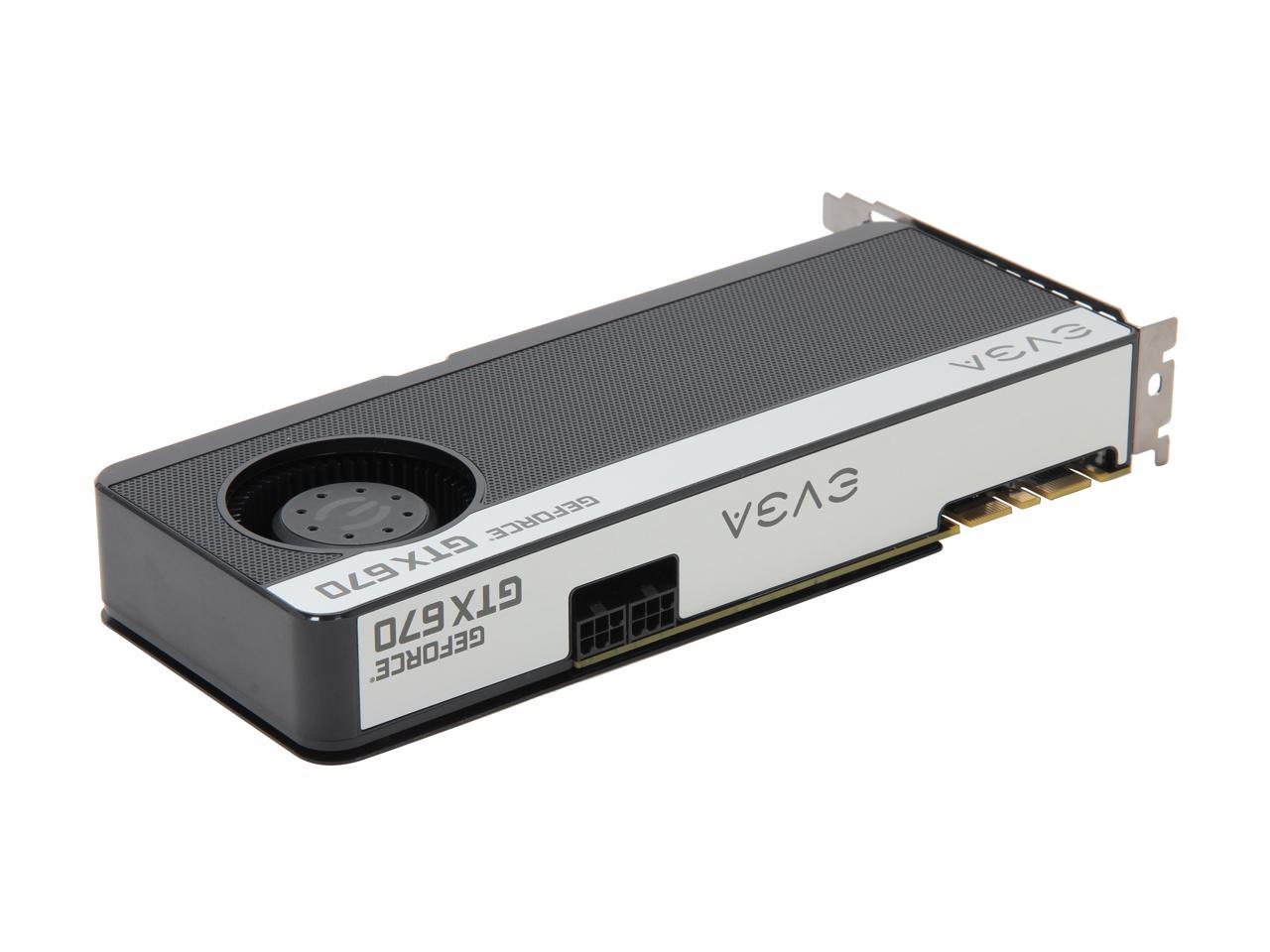 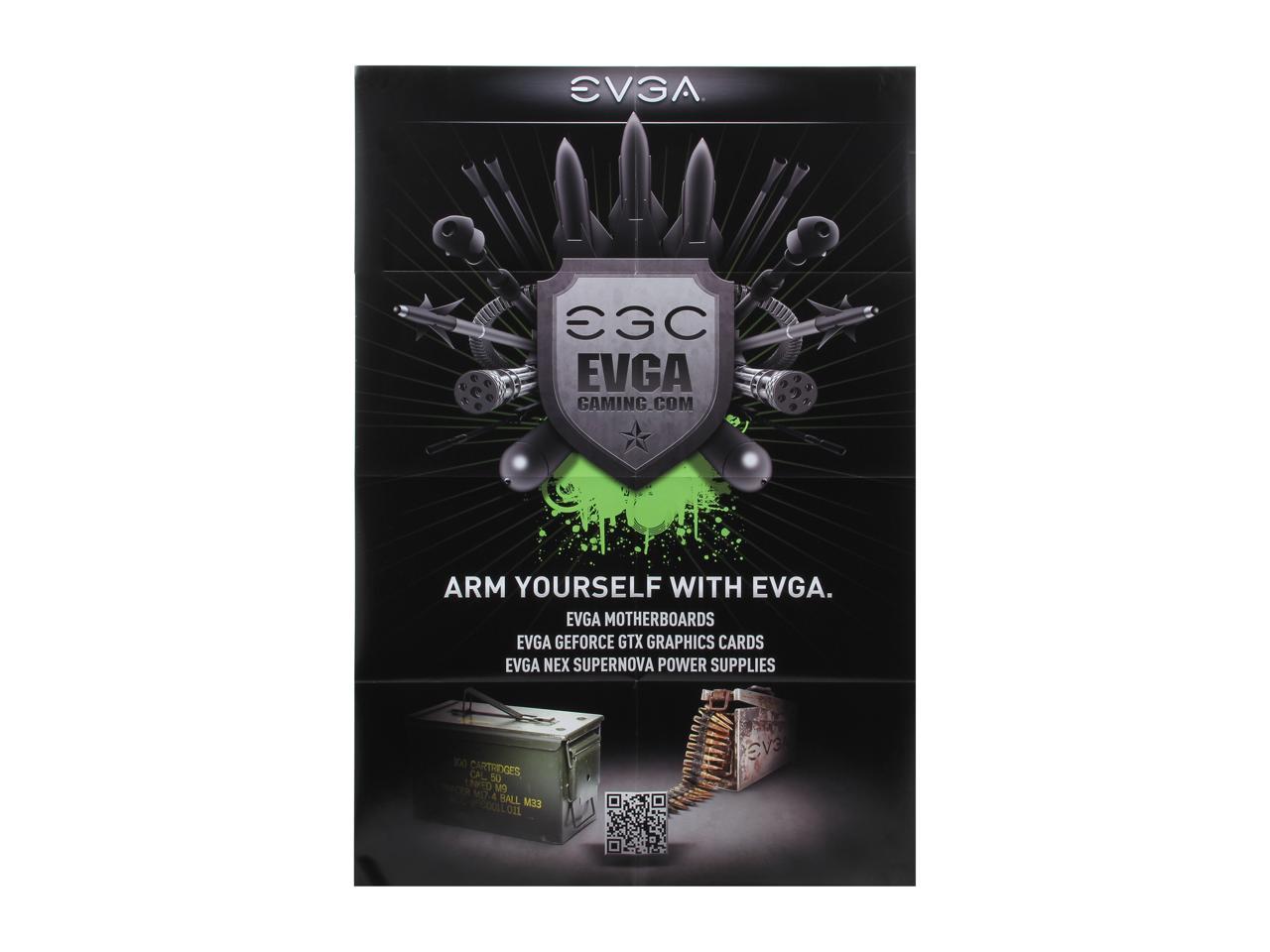 Get to the next level with the EVGA GeForce GTX 670. This card delivers truly game-changing performance that taps into the powerful new GeForce architecture to redefine smooth, seamless, lifelike gaming. It offers some newest features to redefine the way you think about performance graphics cards. Expect more from your graphics card than just state-of-the-art features and technology; get a faster, smoother and richer gaming experience with the EVGA GeForce GTX 670.

Pros: Overall this is a great card with just a few flaws. This card is quite powerful. I replaced two EVGA GTX 560 Ti 2GB cards for this single card. It is so nice being able to support my three monitors off of just one card, instead of two. It was definitely an improvement. The performance is so close to the GTX 680, that it's not worth buying the GTX 680. The temp range is normally 33-46C with a fan speed of 30-40%. Supports up to four monitors. External exhaust setup for this video card gives lower GPU and system temps. The backplate not only looks great, but is used as an additional heatsink. There are thermal pads between the the PCB and backplate to transfer heat from the PCB to the backplate. 4GB is great for maxing out display settings in some of the current and upcoming games and for larger displays. 24/7 tech support.

Cons: The fan noise is down right annoying. It's not so much that it makes noise as it is the type of noise that it makes. It's hard to describe it, but it's a bit of an oscillating sound that you start to hear once the fan is over its minimum speed of 30%. The picture quality is lower through the HDMI than it is through the DVI. The color using HDMI looks faded. I tested three different HDMI cables on all three of my monitors. I had the same faded color result each time. The power connection placements are in an odd spot. If you have a side case fan, you will need to make sure the cables don't hit the fan. EVGA's tech support just isn't what it used to be. When I called with some questions in regards to this card, they were just clueless. An example of this was the tech telling me this card only supports a max of two monitors, when it actually supports up to four. Confusing warranty programs. EVGA has different warranty programs and options that seem to constantly chang

Pros: Great looking cards, Have not experienced any of the fan noises that others noted. I burnt in the cards with Kombustor and they have remained stable at stock speeds. No fan adjustments or overclocking yet. The fans are set to auto and they remain around 35 at idle, while gaming they climb up to 80 but fans have not kicked in over 50% so, I am sure if I adjusted fan they would be a lot cooler. I am benchmarking at stock setting, will tweak when I have more time to miss around with them.

Cons: Hmm of course price ouch, but you get what you pay for wanted the extra memory to run at 5760x1080

Pros: I have two of these cards in SLI and performance is great. I can fun Battlefield 3 on max settings in 5760*1080 and maintain 60 fps nearly all the time. I am glad I went with the 4GB cards as I have already experienced multiple instances where more than 2GB of vram was used. On a single 1920*1080 screen I have used up to 2.7 GB in Skyrim and Battlefield 3 in surround has been about 2.5 GB. Temps on the cards have never gone above 68 Celsius even without any space between the cards. I could not be more pleased with these cards.

Cons: The cards that I received don't overclock very well beyond the factory speeds, but it does not really matter because the card are already so fast and overclocking made an unnoticeable difference for game play.

Pros: I purchased 2 of these to run in SLI for surround. I'm running everything at 60+ FPS with all settings on Ultra/Maximum and anti aliasing maxed across 3 1080p monitors for a total resolution of 5760 x 1080. Metro 2033 is literally the only game that will dip down in framerate at times to around 26-28fps, but thats at 5760 x 1080 with everything maxed; however, on average its running about 40-45fps and is very playable even with the intermittent dips. On one monitor though, these cards can run it like Usain Bolt runs the 100M. Crysis 2, the DayZ mod for ArmaII, Battlefield 3, League of Legends, Diablo3, Skyrim, you name it, they will run it like a champ. I have not noticed ANY microstutter whatsoever. These cards are truly beasts, and I haven't had any temp issues either. I highly recommend them.

Overall Review: It would be cool if there were some waterblocks made for these cards, I'd be interested in doing a custom liquid cooling loop.

Cons: The heatsink on the card actually extends about 2 inches past the PCB of the card so if you have a smaller case this might be an issue, but then why are you buying this card. The rubber they use to keep the Backplate from touching the PCB leaks an oil upon getting hot. I'm not sure if this is dangerous but was quite surprised when I removed the plate to see the rubber there. Not necessarily a con but most 32bit games can't even use all of your VRAM*.

Overall Review: *I went from SLI GTX 460 1GB 256bit to this card and I have to say that SLI has a few problems. I wanted to get away from it and bought this card. Texture sizes in many modded games(ie, S.T.A.L.K.E.R., Crysis, Crysis 2, MaldoHD3.0) all exceeded my VRAM capacity and my system suffered from performance hits when I used my 460s because they lacked enough allocatable space to have the textures for the game on the buffer. But another problem has presented itself, VRAM allocation by the operating system. Windows can only allocate 3.75GB of RAM to any 32bit application at once, this presents an issue. The RAM is shared in the allocation space so that means if the game is using up 1GB of RAM then only 2.5GB of VRAM is allocatable. So in games like Crysis 2 MaldoHD3.0 many textures were missing because Crysis 2 was using so much allocated space that it exceeded what windows could allocate and stopped some textures from being put on the buffer thus making the texture not appear. This is only a problem in games that are 32bit and require more than 3.75GB of RAM/VRAM. It's an interesting concept but 64 bit programs are supposably the future, and with consoles slugging down the industry at large the only real games to use as benchmarks that are actually fun have been Crysis. Don't get me wrong but Metro 2033 just rubbed me the wrong way. I'm not here to review the games in question but it's merely attempting to present use of the 4GB of VRAM that this card has to offer in a passive way.

Pros: Upgraded from a 570GTX and couldn't be happier. While the 570 is a very good card it does struggle on Ultra settings in Crysis 2 and Metro 2033. And with Planetside 2 coming our way I felt like the rig needed a boost. All of my games run 60+ fps on Ultra/Max settings now.

Overall Review: Also, the card is much quieter than the 570GTX.

Pros: Runs BF3 on ultra on a 24" trip monitor setup ON ONE CARD!!! Amazing! No stuttering no lag no delay!! Getting a second one could almost be a waste of money, almost. ;)

Cons: Card Is a little Heavy on the PCI Slot, could weigh down and bend over time.

Overall Review: Why bother getting a gtx680? This thing is almost the same card, 5-10% deference maybe. Even then You wouldn't notice something like that in game.

Pros: As I stated on my previous review. The card runs a dual monitor setup with ease. With the PrecisionX program the card does not run hotter than 80 degrees during the summer months.

Overall Review: I stated that the card kept crashing on my while playing Guild Wars 2 for extended periods of time. Apparently my issue was a motherboard bios issue. My motherboard has 3 mods for the processor. Energy saver, normal, and turbo boost. Seems when I updated the bios it set the processor to easy save without my knowing. Which caused my video card to bottleneck and crash. Since my friend helped me find this and yes I feel with my pc knowledge I should have known this. Well since then the card has worked as intended and I have been more than happy with it. Just wish I could edit or delete my previous review. Sorry EVGA. Planning to get another one down the line for a SLI config.