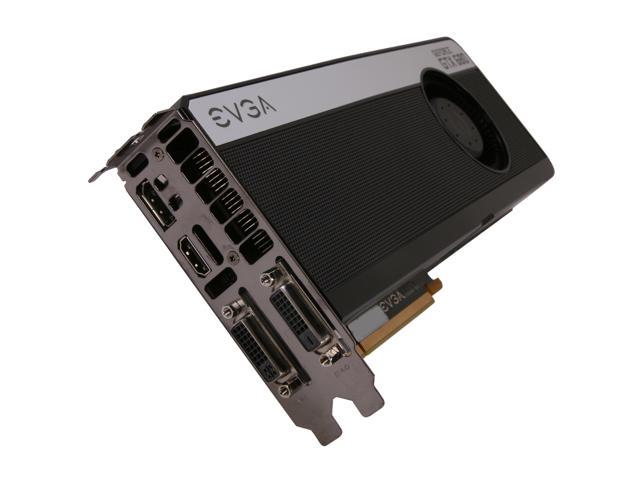 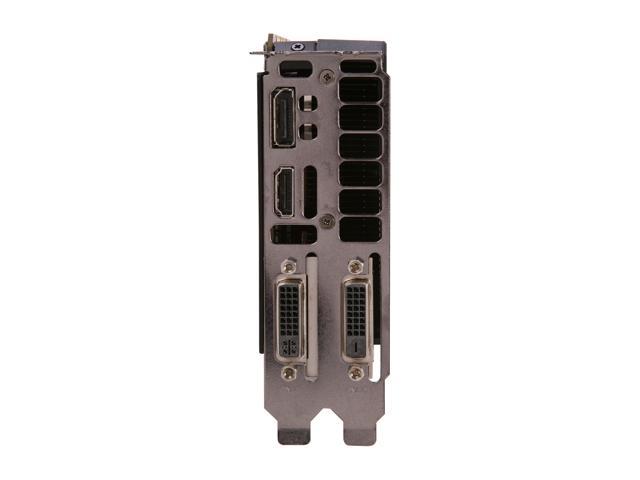 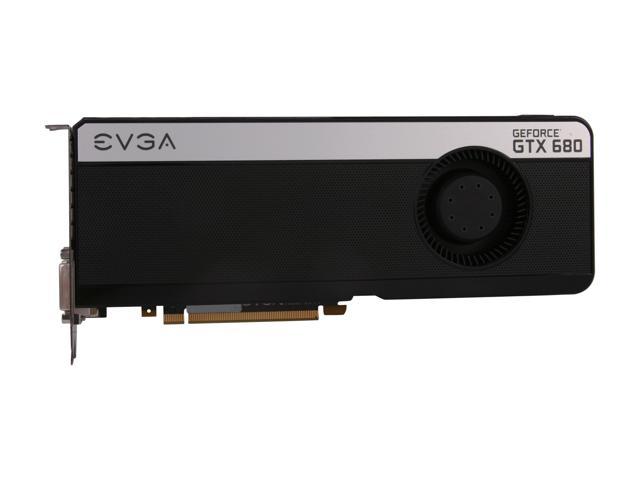 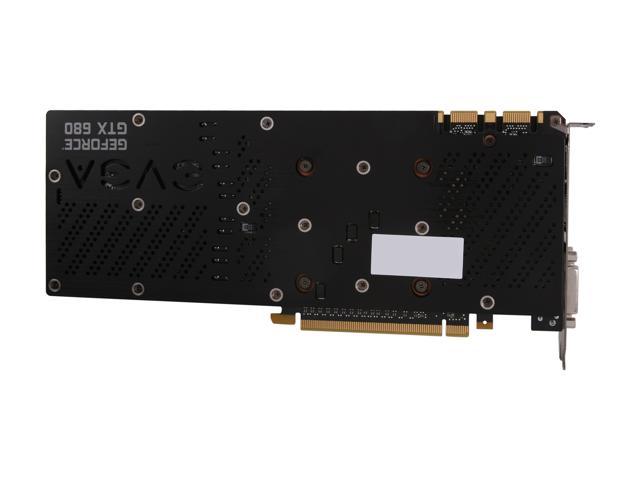 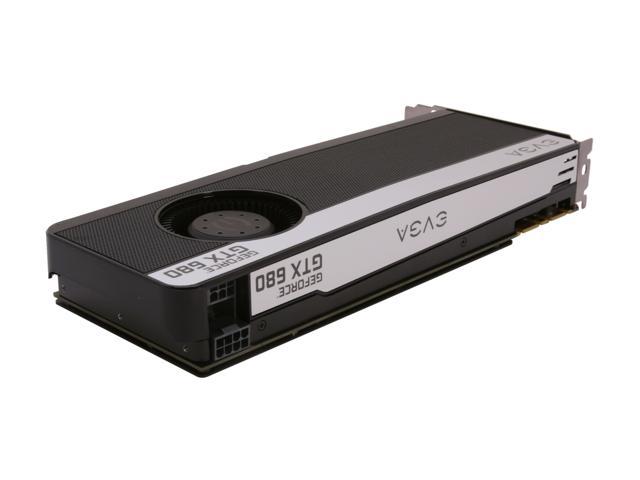 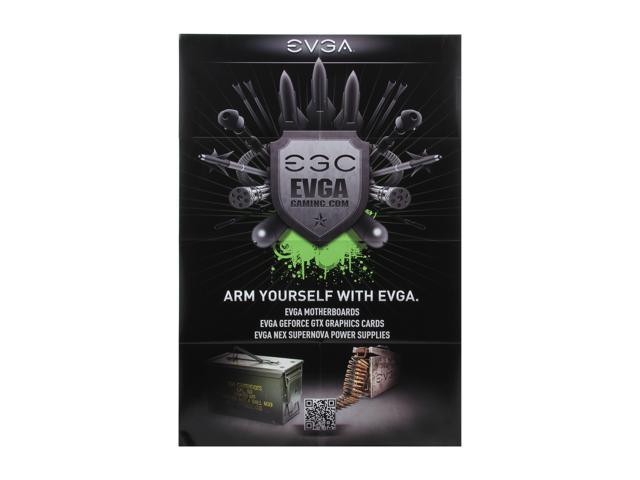 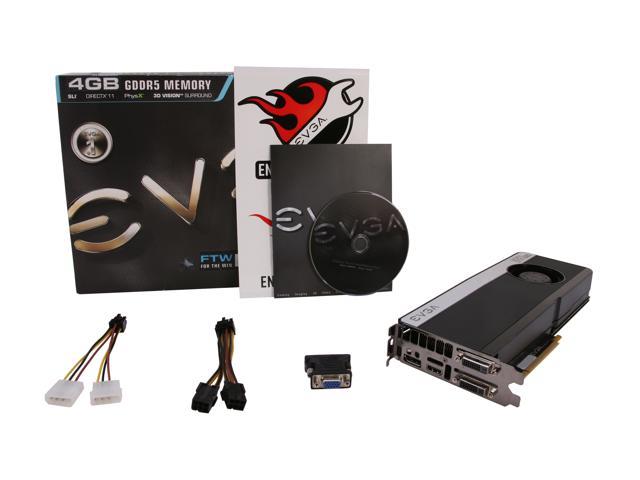 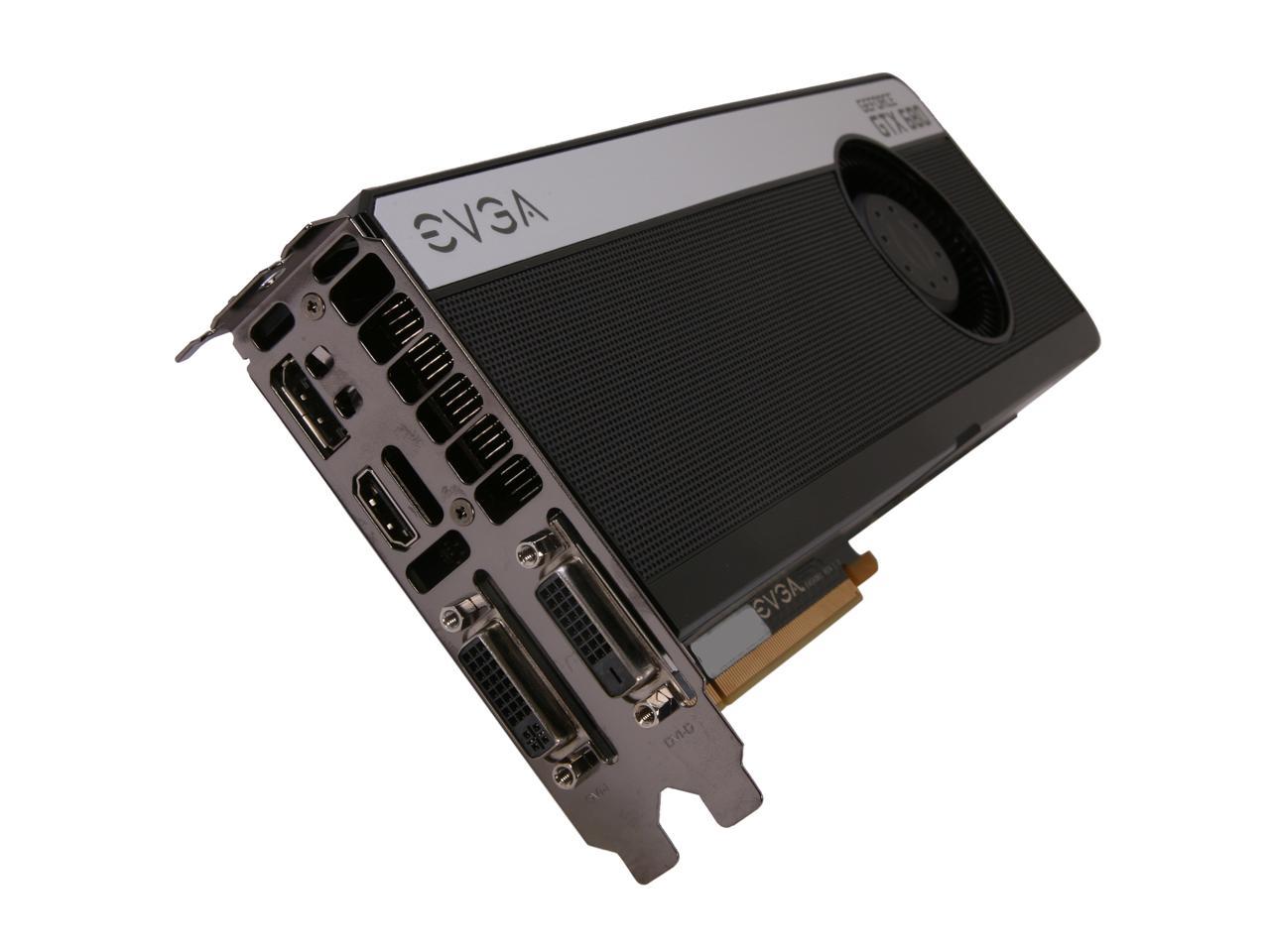 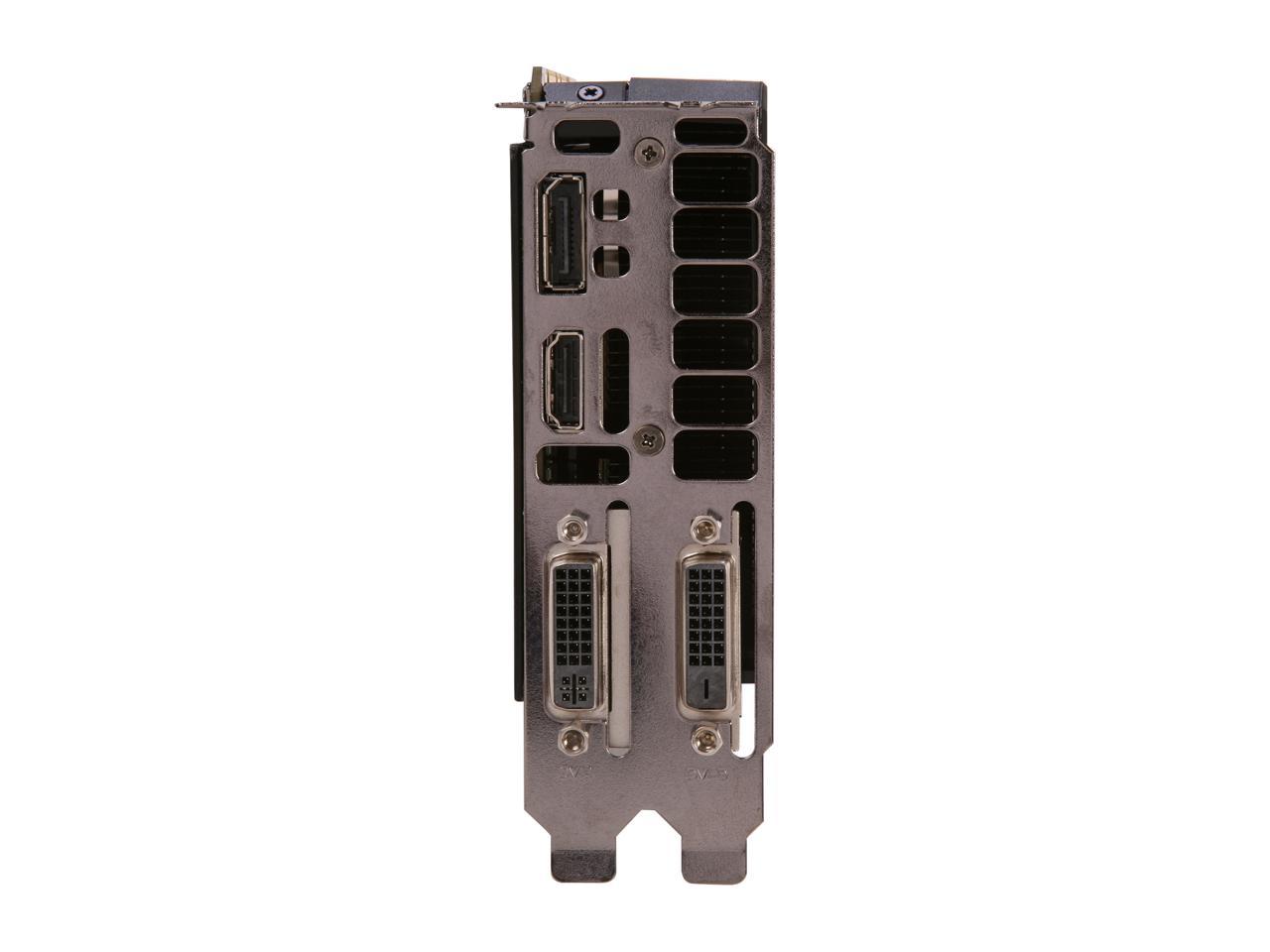 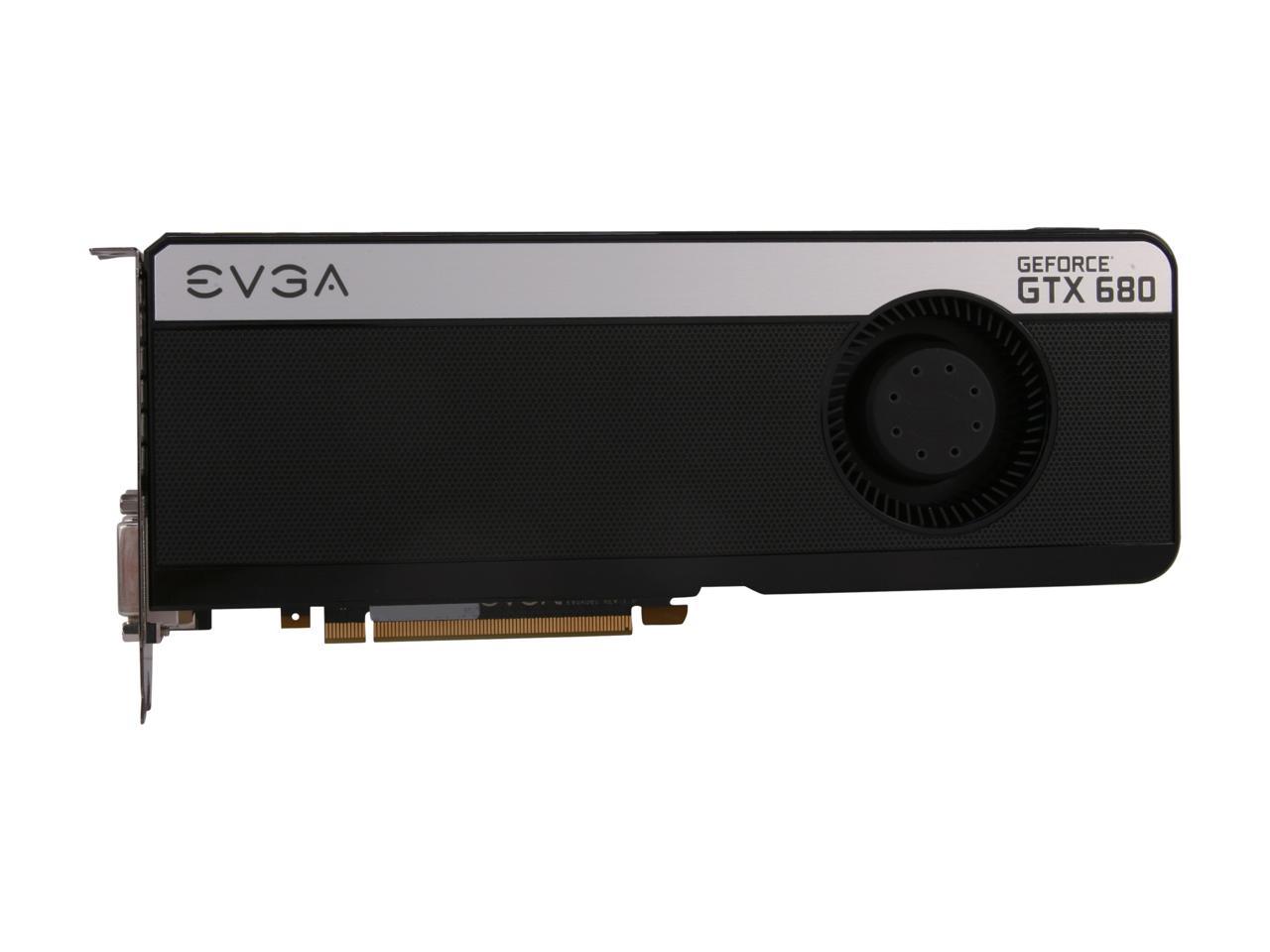 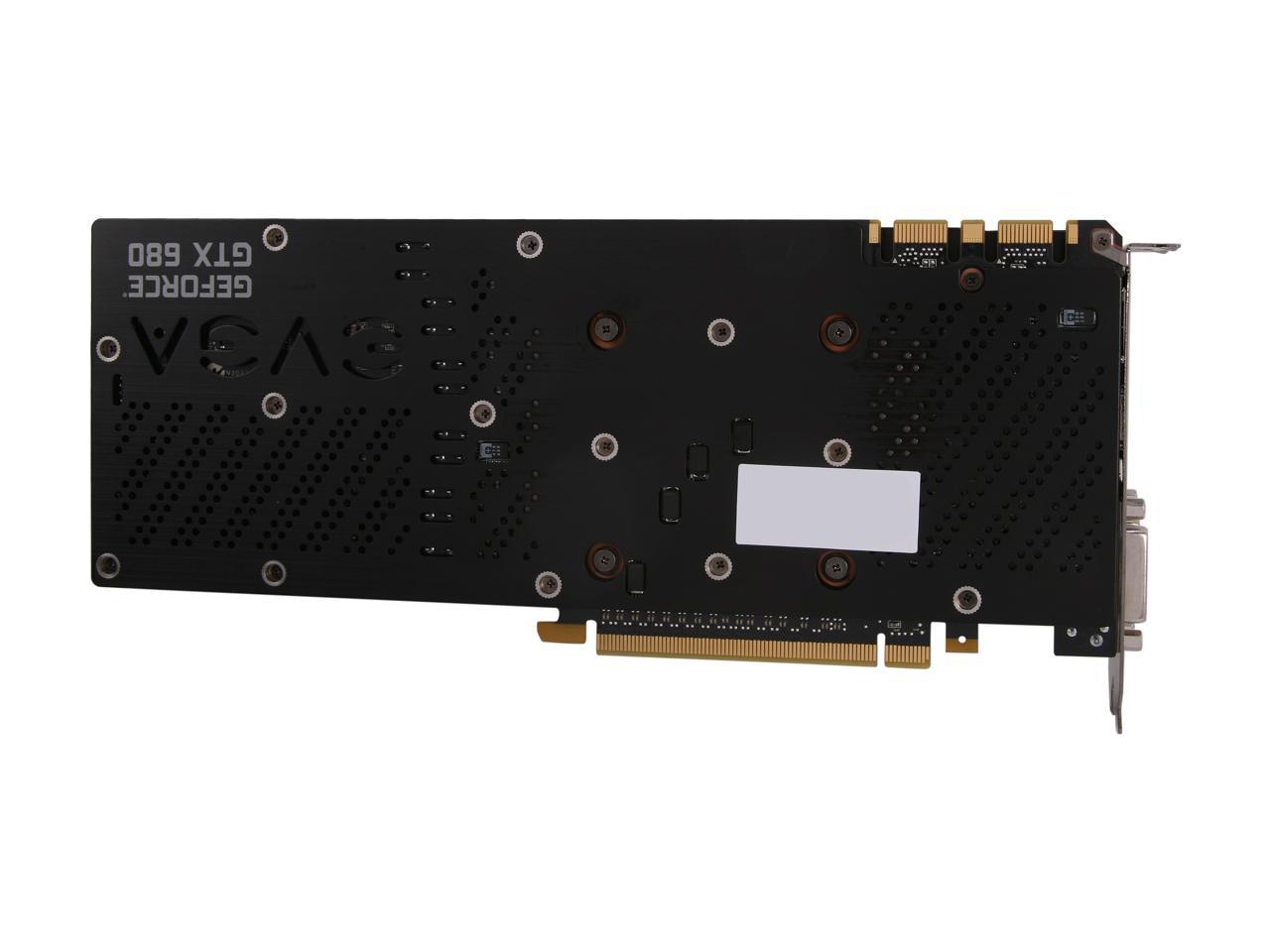 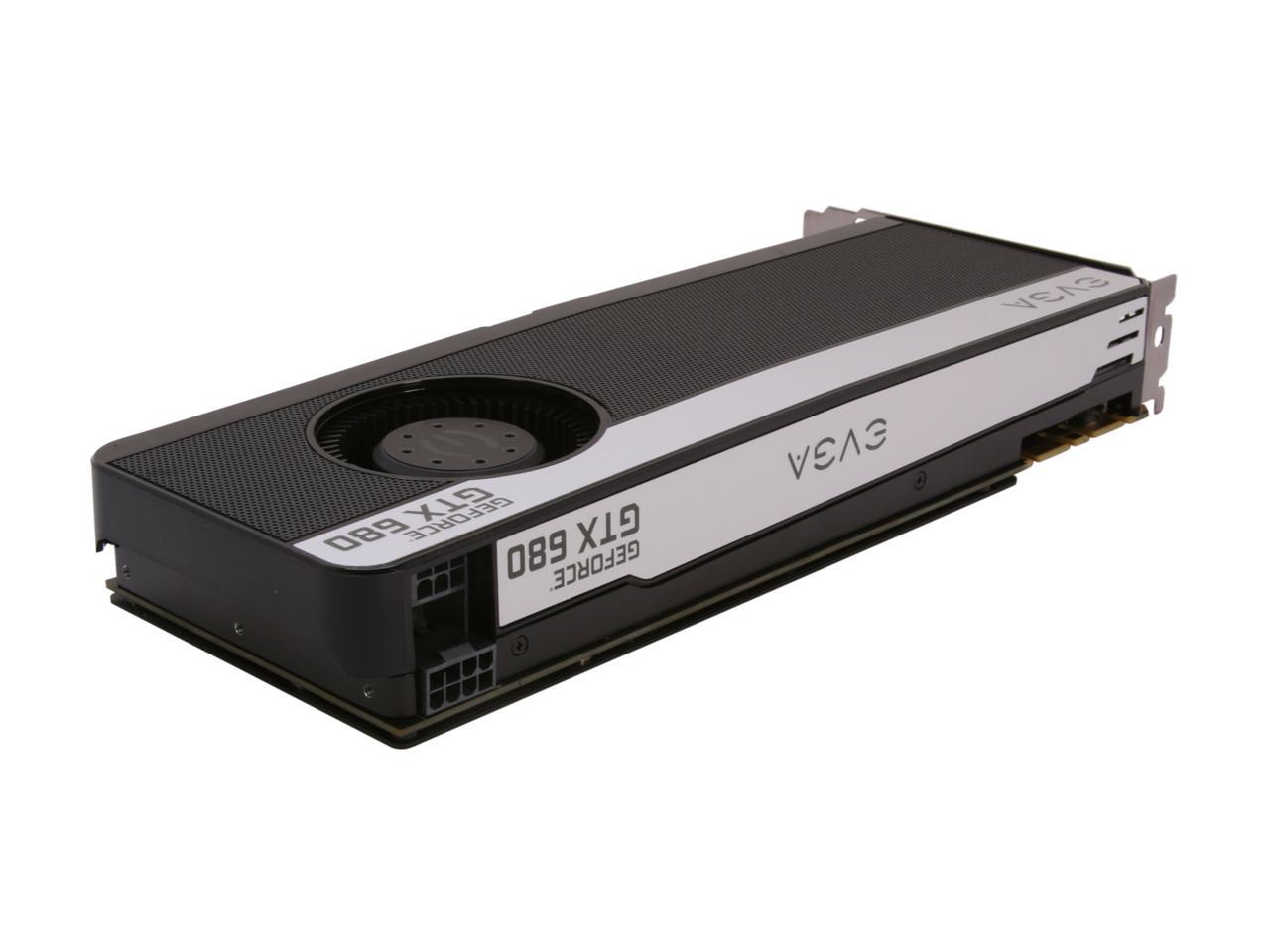 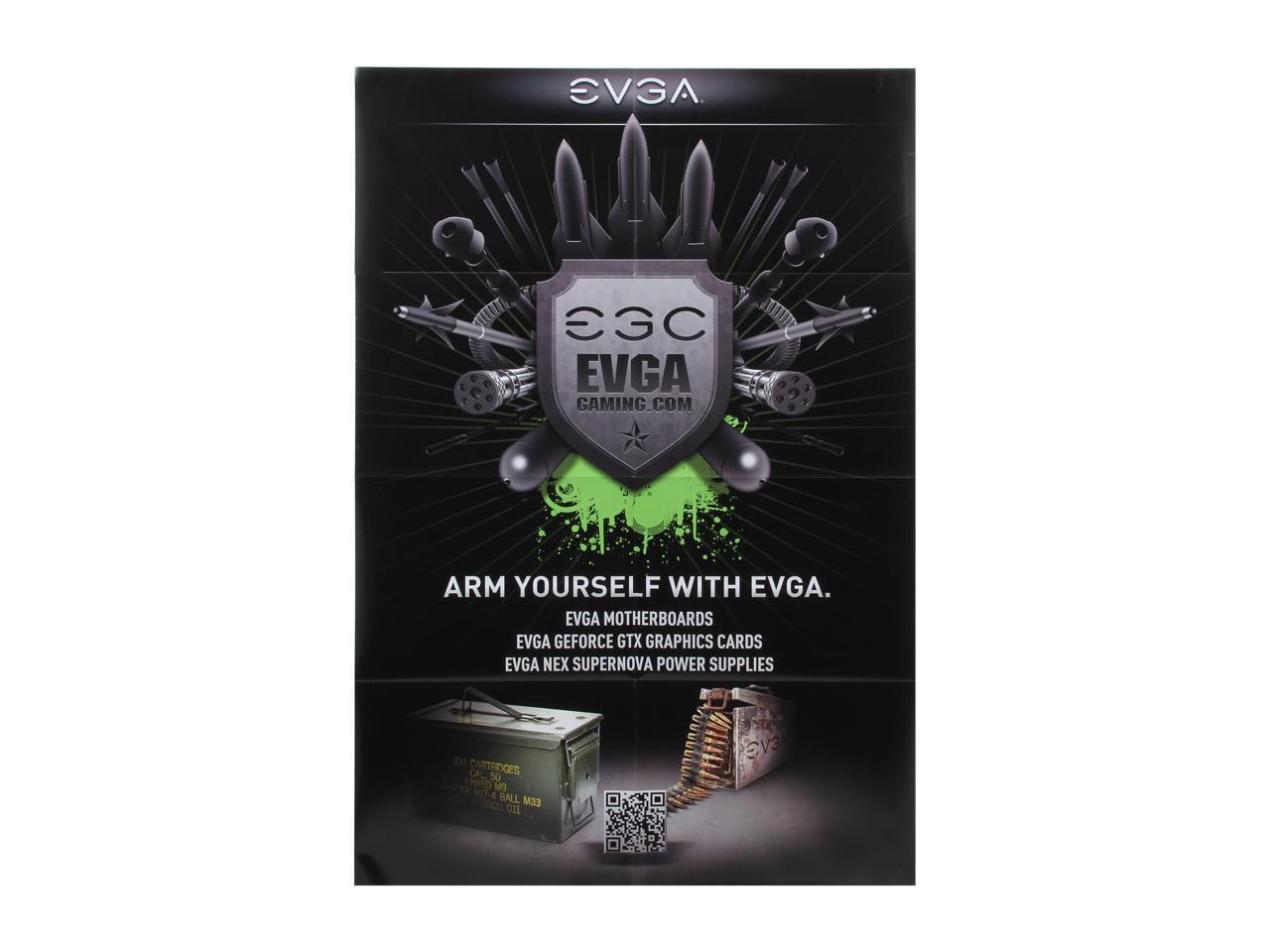 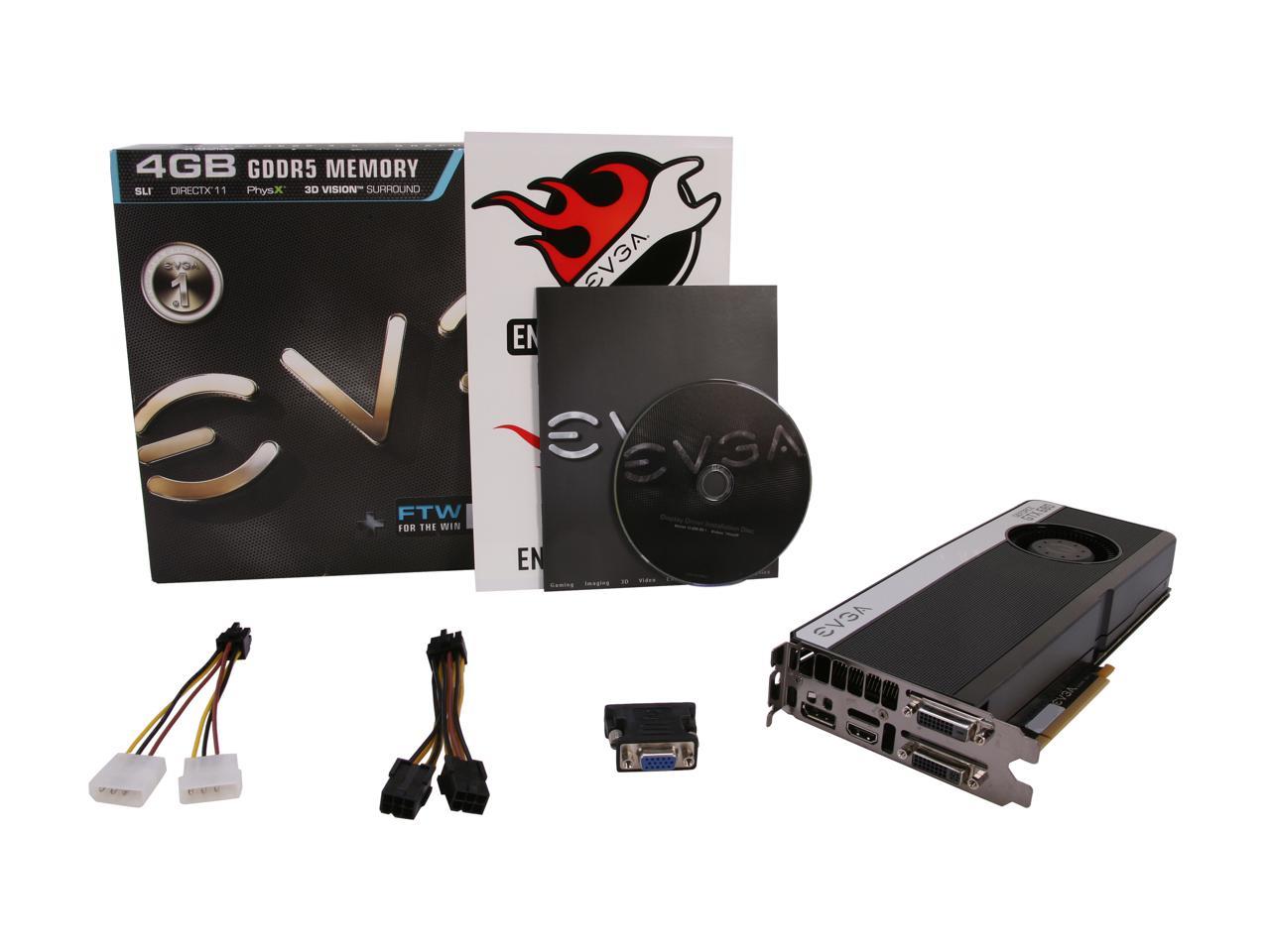 Transform your games with a new level of realism and environmental interaction with the EVGA GeForce GTX 680 FTW Standard. Based on the state-of-the-art 28nm Kepler architecture, the EVGA GeForce GTX 680 FTW Standard is built around 1536 CUDA Cores and 4GB/256-bit GDDR5 memory, delivering reality-redefining performance for your to enjoy faster, smoother and a richer HD game in the latest FPS, RTS, MMORPG and RACING games. This card also supports full set of NVIDIA GTX technology, such as NVIDIA GPU Boost, NVIDIA Adaptive Vertical Sync, NVIDIA Surround and NVIDIA PhysX Technology. These sophisticated technologies offer you more than one way to elevate your experience.

Pros: This card runs great, OCs good, plays games like a champ, and runs 3 monitors in surround w/o having to use an adapter (2xdvi 1xhdmi)

Cons: Didn't come with an extra one in the box.

Overall Review: One thing I did notice is I had to set the fan curve a little higher when running on 3 monitors, no matter the clock settings, or load setting. running a game with ultra/full graphics, gpu overclocked on one monitor = no heat problems (40°c-60°c) low graphics, standard clock, 3 monitors = card runs quite warm (80°c+)

Pros: Shreds every game on Earth. You want 60fps in BF3 ultra at 1920x1080 with insane Anti aliasing? Meh, thats only a 81% load for this card. 4gb buffer is great for second monitor in DCS world, using ~2.9gb with a-10c and tgp screen on second monitor. EVGA Warranty! EVGA Precision X software is the absolute BEST gpu control software I have seen bar none.

Cons: Did not come with a free puppy.

Pros: A powerful single-card solution, delivers smooth frame rates at high detail with a relatively low power draw, which means you get all this performance without obnoxious heat or fan noise. The card looks great, has clean lines and the backplate really does look good. See "Other Thoughts" for some info.

Cons: The 4GB VRAM may be a bit overkill for most users... The card is pretty long... it overhangs my SATA ports by about an inch, or, just enough to make it really tricky to add drives after the card is installed. Item description pitches it as "Standard" edition, but it comes with a sticker marking it as "LE" - so far as I have been able to find, when it comes to 680s the terms "Standard" and "LE" are interchangeable and the cards purporting to be one or the other have the same SKU and specs.

Overall Review: I bought this to replace a pair of GTX 470s in SLI, and so far I have been very happy with that decision. In a very common benchmark, the 470s scored a 2292 @ 91fps while the 680 scored a 2877 @ 114 fps. That 25% performance increase was delivered in near-silence, and at nearly 160W less draw than the 470s. I don't have a thermometer in my office, but the difference between the heat thrown off a 680 under load and the 470s under load is incredible. You could bake a cake in 5 minutes behind the 470s, whereas with the 680, you might be able to melt butter after a while, if you tried hard. It really is that much of a difference. As far as the 4GB VRAM buffer goes, there aren't many practical reasons to go with 4GB over 2GB, with the notable exception that game mods are trending towards the gigantic. You can get a card with half the VRAM and a 10% overclock for about the same money, but, I figured the number of times I'd notice an extra 3 or 4 fps would be one day dwarfed by the number of times I wished for more VRAM. That's more of a "when" than an "if" thing.

Cons: Doesn't make me a better aim in BF3 Doesn't have a waterblock included :D

Overall Review: Despite the nay saying, I got a 4GB card even though I run a single display at 1920x1200. When I bought my GTX580 I got the 1.5GB version and regretted not getting the 3GB version ever since. It's future proofing man. I try to get every millimeter I can out of hardware before upgrading, and like another guy said, it may not be used in most games besides Metro 2033 and Skyrim heavily modded, but it's there and the price premium over a 2GB card was really negligable. I bought this card to round out an Ivy Bridge build, i5 3570k under a XSPC Raystorm with RX360 rad and D5 pump, with 16GB Corsair Vengeance, all on an Asus Maximus V Formula board also water cooled. Powered by an AX1200. I didn't want to rob the 580 from my Core 2 Quad system.

Pros: Runs everything on ultra. Very very smooth. I play bf3 and I am looking forward to running bf4 and new medal of honor. This card runs bf3 like butter, its beautiful... just beautiful. Well worth it.

Cons: Loud gpu fan when RPM speeds are at 85%. But well worth performance. Why does it say FTW LE on the box??

Overall Review: I am running, i7 3770k, z77 FTW mobo, 16GB 2133 Gskill, 1000 watt coolermaster psu, 240GB Corsair SSD, in a HAF X case. My email is jm.3330@gmail.com, email if you have questions or problems with this card or have questions on building a new rig. I originally bought a GTX 670 4GB FTW SC and was getting red screens during BF3 and tried contacting evga, nvidia, and anyone else who could explain this but no one had an answer... it ended up being that GTX 670 was bad. Email me if you have problems with this card! Games are fun on PC, the technical problems shouldn't discourage future gamers from playing PC games.

Pros: Upgraded from SLI'd 560 Ti's and there is a huge difference in frames. I'm able to play on high settings while frapsing with decent fps. Without frapsing I can run triple A title games with high or near ultra graphics with 50-70 fps. Other games it runs 120+ FPS. Games I've played recently that I can run between high and ultra are crysis 3. 50-70FPS. If I bump AA up to 4x+ frames significantly decrease. While playing PS2 my CPU (2600k) was bottlenecking my gpu. I OC'd to 4.4 ghz and it switchs between both cpu and gpu for bottlenecking so I hit the sweet spot. Definitely increased performance on PS2. Haven't tried Crysis 3 yet with OC'd CPU. Fans run pretty quiet but I don't notice them because I have a headset on. Also runs games on my 42" LCD/Plasma T.V. at pretty similiar frames to my 24" Monitor. GPU looks pretty sweet as well I'd have to say, nice and clean structure. Plays perfect for following games. Borderlands 2, Deadspace 3, crysis 3, Planetside 2, Batman Arkham Asylum. And a multitude of other games that don't have near as high system requirements as the games I listed above.

Cons: Price is pretty steep, but the 4gb definitely worth it if you plan on playing games with huge resolution. IE 42" T.V's. Almost didn't fit in my medium tower, had to push wires aside connecting to my power supply to fit the bad boy in.

Overall Review: Worth it for the price if you like the eye candy for recently released games.

Pros: The card is fast and runs cool under load (never above 70 C with a slightly tweaked fan curve). eVGA's included software is very intuitive and useful for tweaking the video card to you preferences. I have an older system (i7 920 overclocked to 3.8 Ghz), and bought this to replace two 560ti cards in SLI. I can now run Battlefield 3 on Ultra (maxed out everything - 1920 x 1080 on a 55" LED HDTV) with the frame rate never dipping below 45 fps. My 560ti cards could never handle the Ultra setting at a playable level.

Cons: I suppose price may be a con, but it's the top of the line (as of this review), so I would expect it to be a bit pricey. I have no regrets with purchasing this card. Also, the card can get a little on the warm side on the stock fan curve. It doesn't overheat, but it does get near the 80 C mark in my Coolermaster 932 HAF case. A simple tweak of the fan curve using eVGA's excellent Precision software will keep the card running nice and cool. This does make the fan a bit loud under load, whereas the stock fan curve kept it relatively quiet.

Overall Review: I was surprised at how much smoother this made all my games run compared to my 560ti SLI setup. I was not absolutely sure that the 680 would give me the bump in performance I was looking for, but it certainly did. I am very happy with this purchase.

Pros: AWESOME!!! I absolutely LOVE the non-reference design of this card! Insanely high 4GB VRAM, vapor-chambor cooling, modified PCB, sick metal backplate, awesome aesthetic design and great overclockability. Haven't pushed it too far yet but it holds up like a champ so far @1100MHz. Will try for more once I get some games installed. EVGA makes the best VGA cards, par none. This was totally worth the extra cost over a stock-design GTX 680. It wasn't even that expensive compared to other 4GB GTX 680's either.

Cons: Haven't tested out any games on it yet because I'm still getting my new Windows 7 install configured but it OC's well so far so there's no reason to believe that game performance will lack in any way. Been using MSI Afterburner to OC, not sure if there's any compelling reason to switch to Precision X but I'll give it a try...