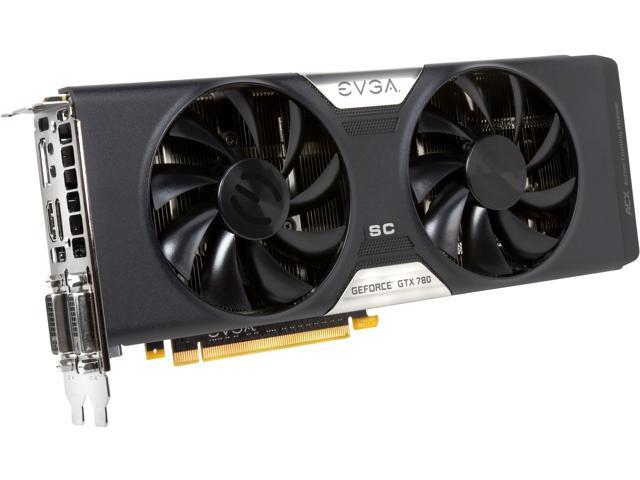 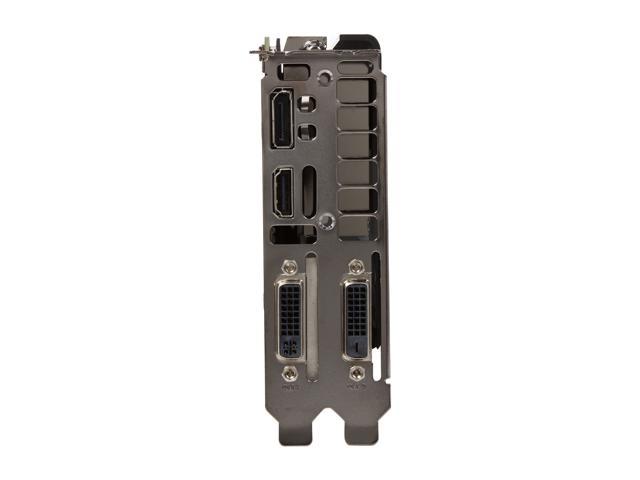 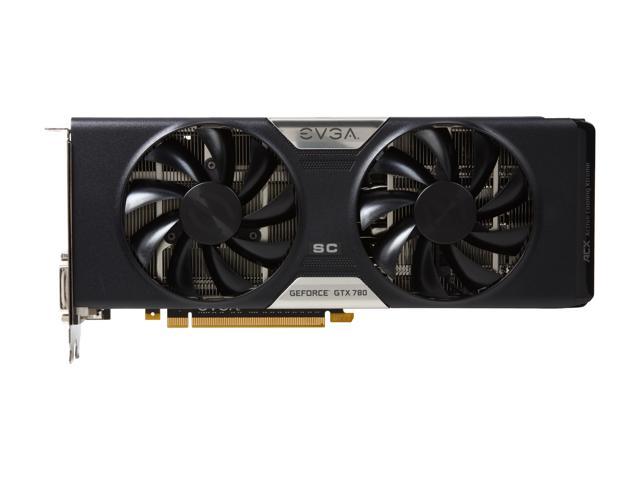 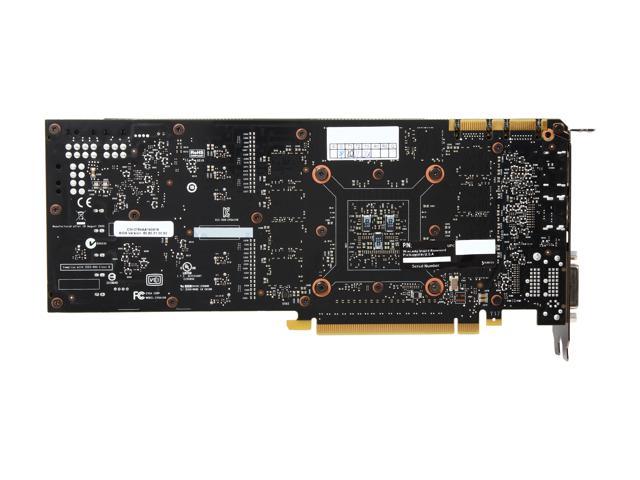 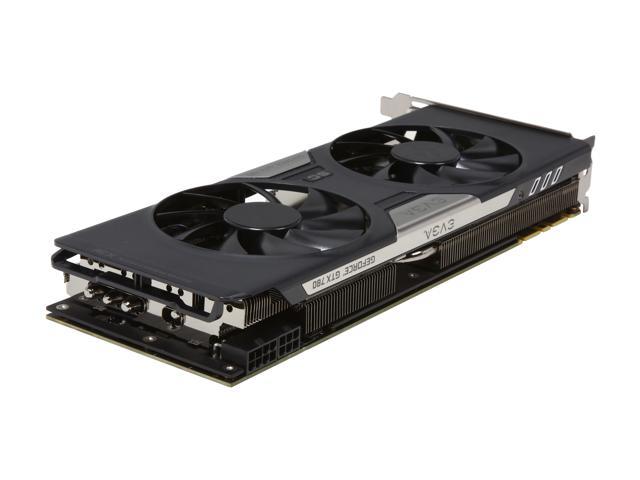 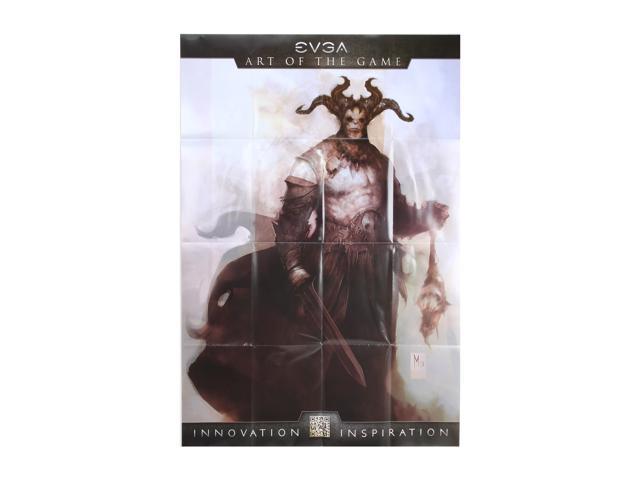 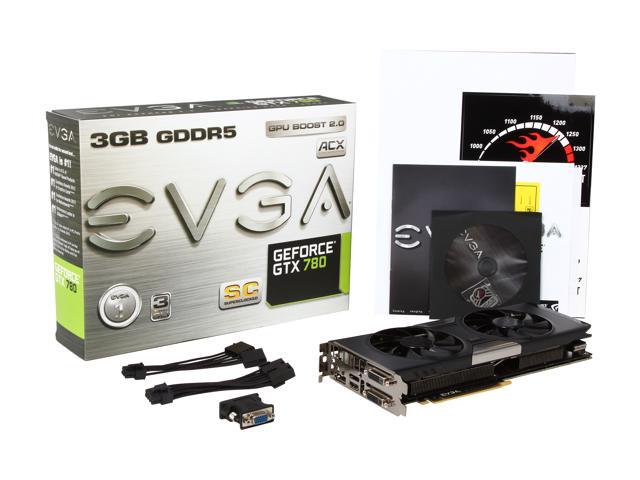 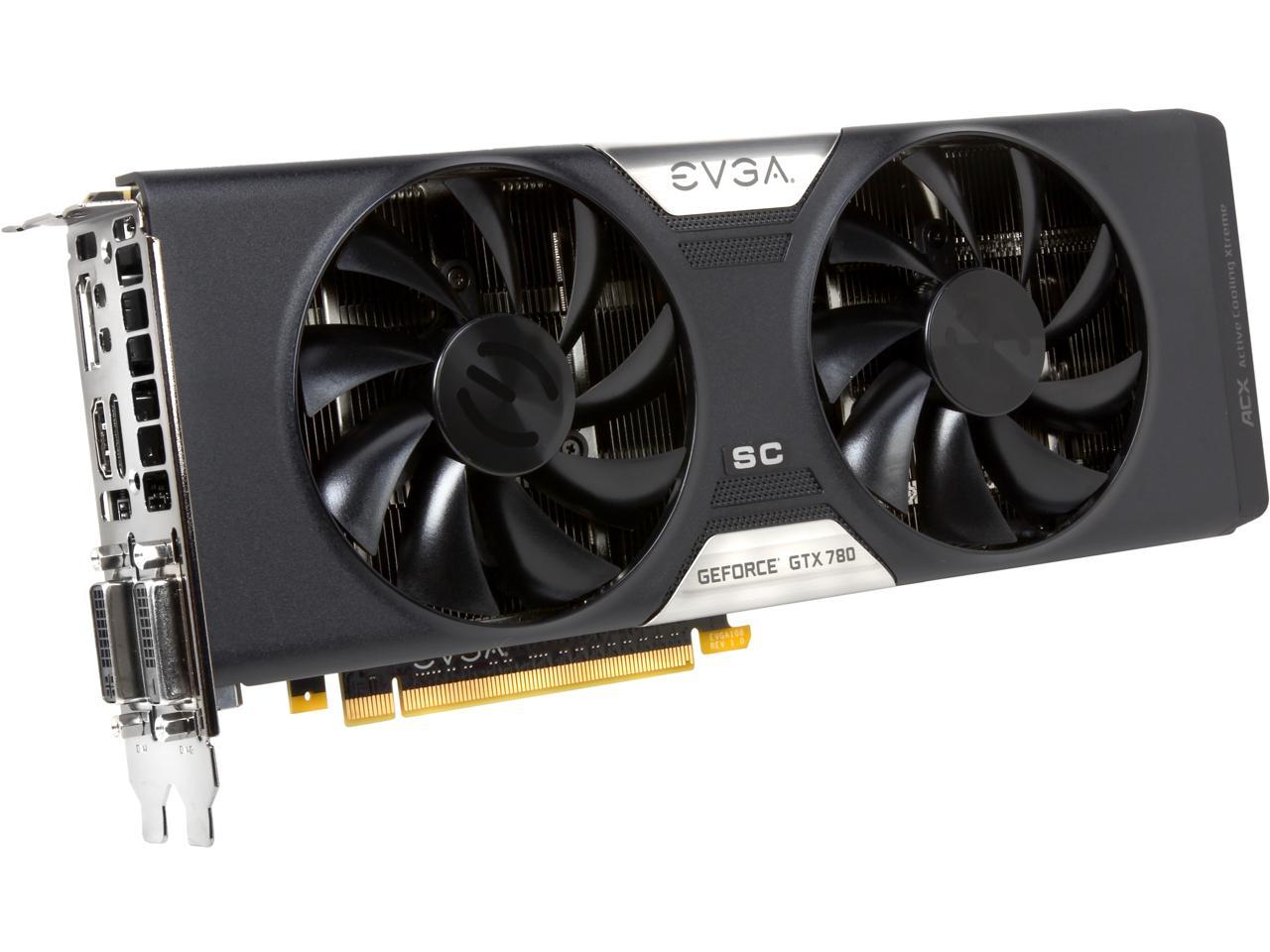 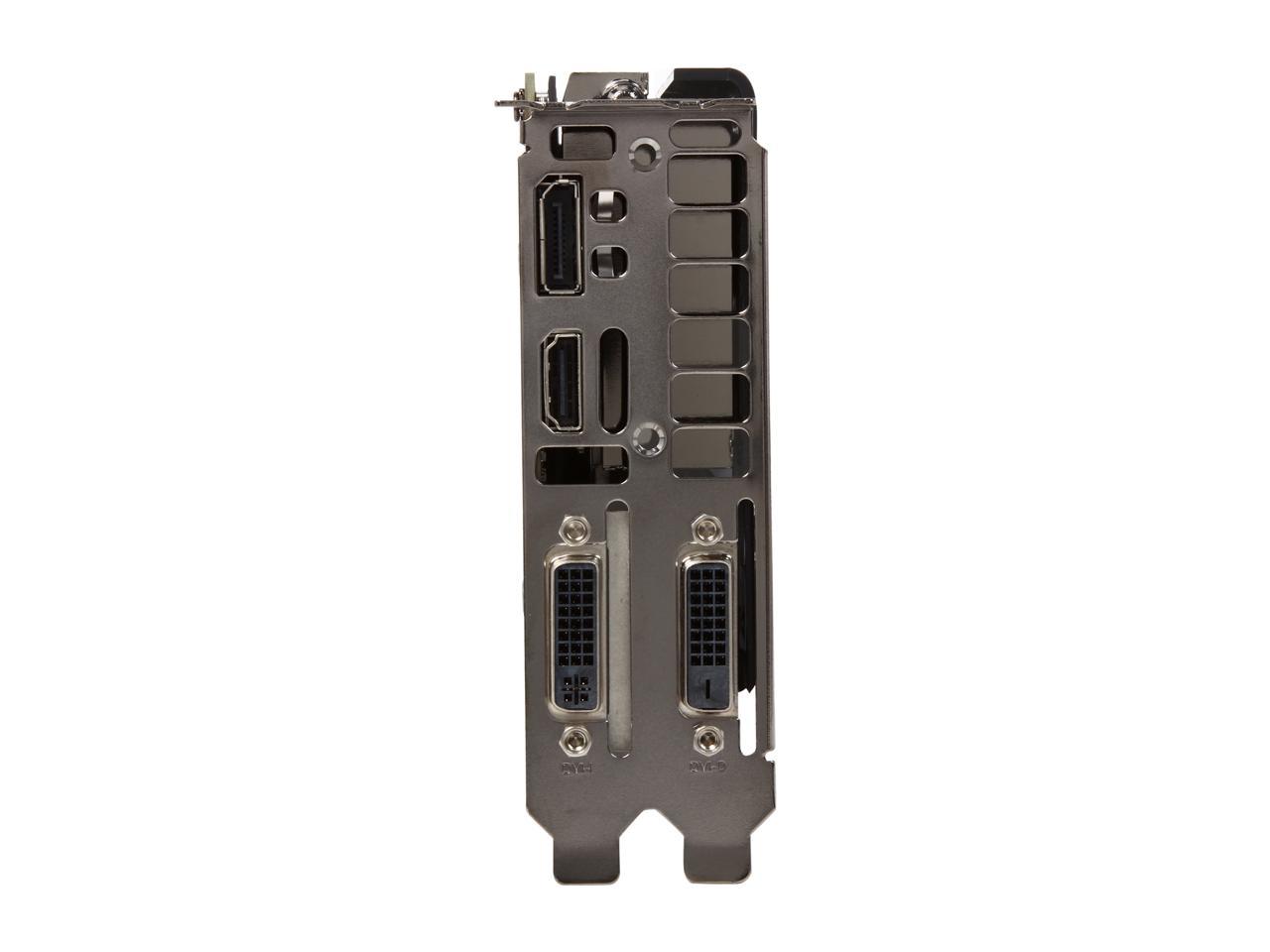 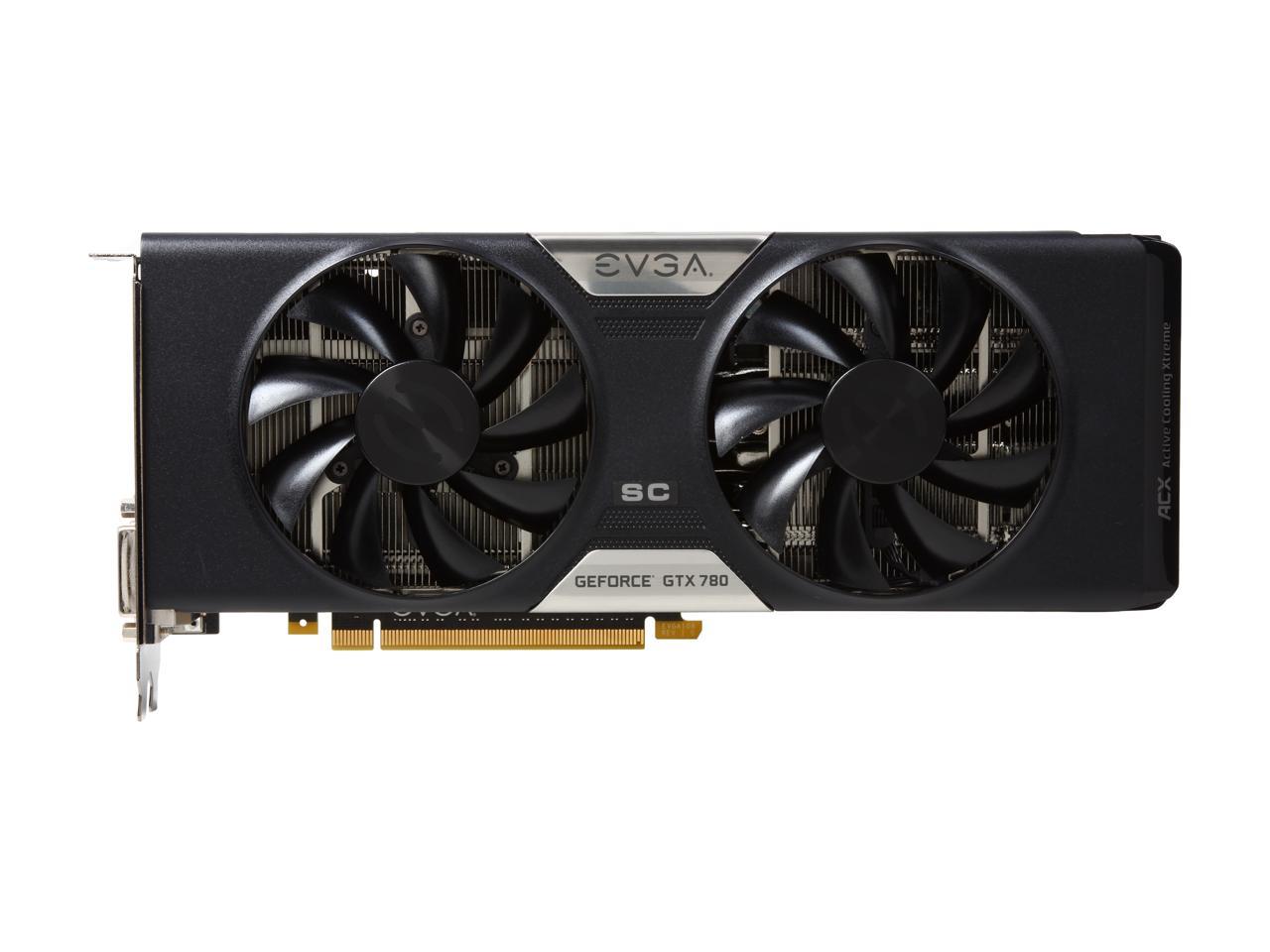 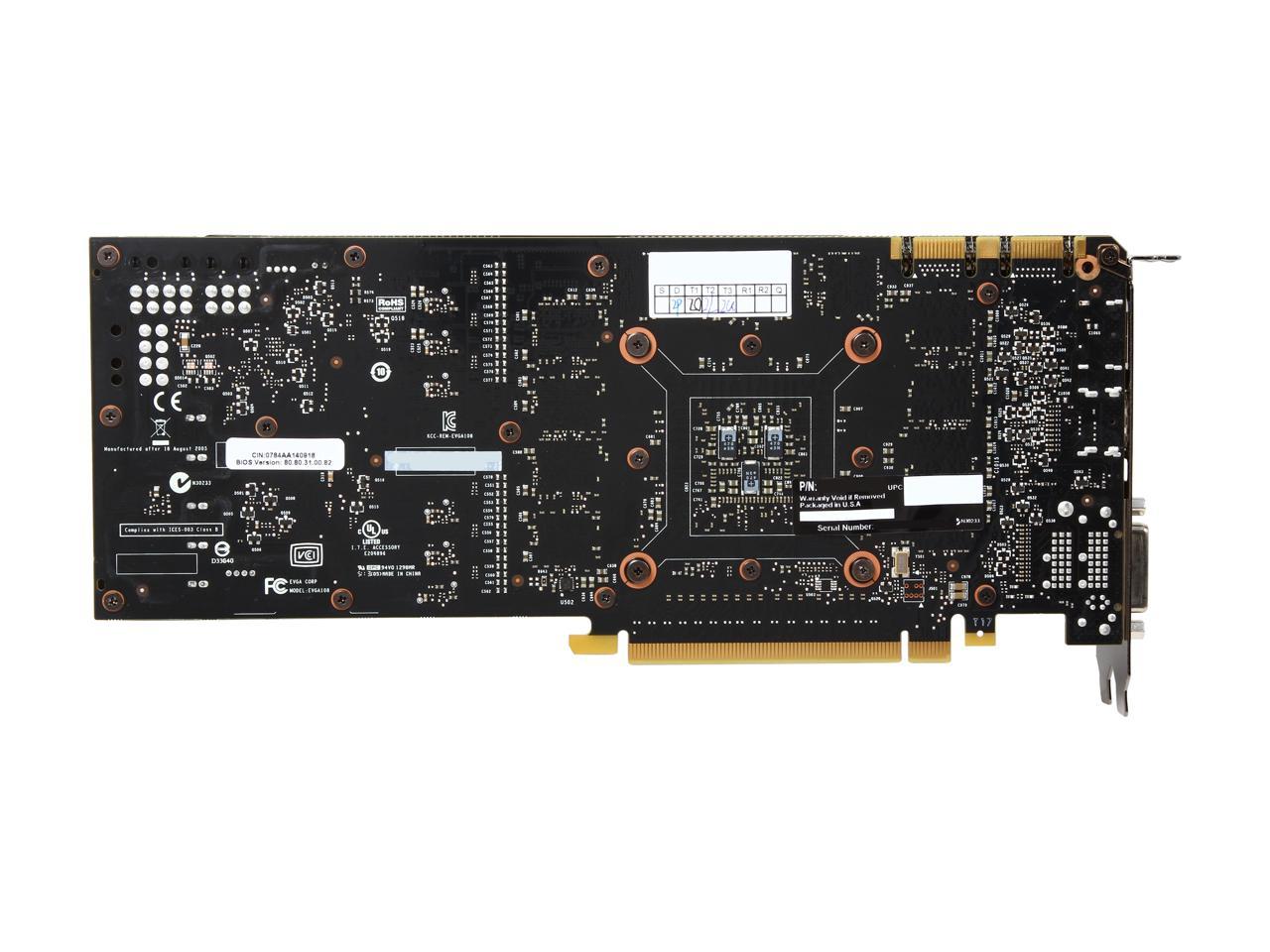 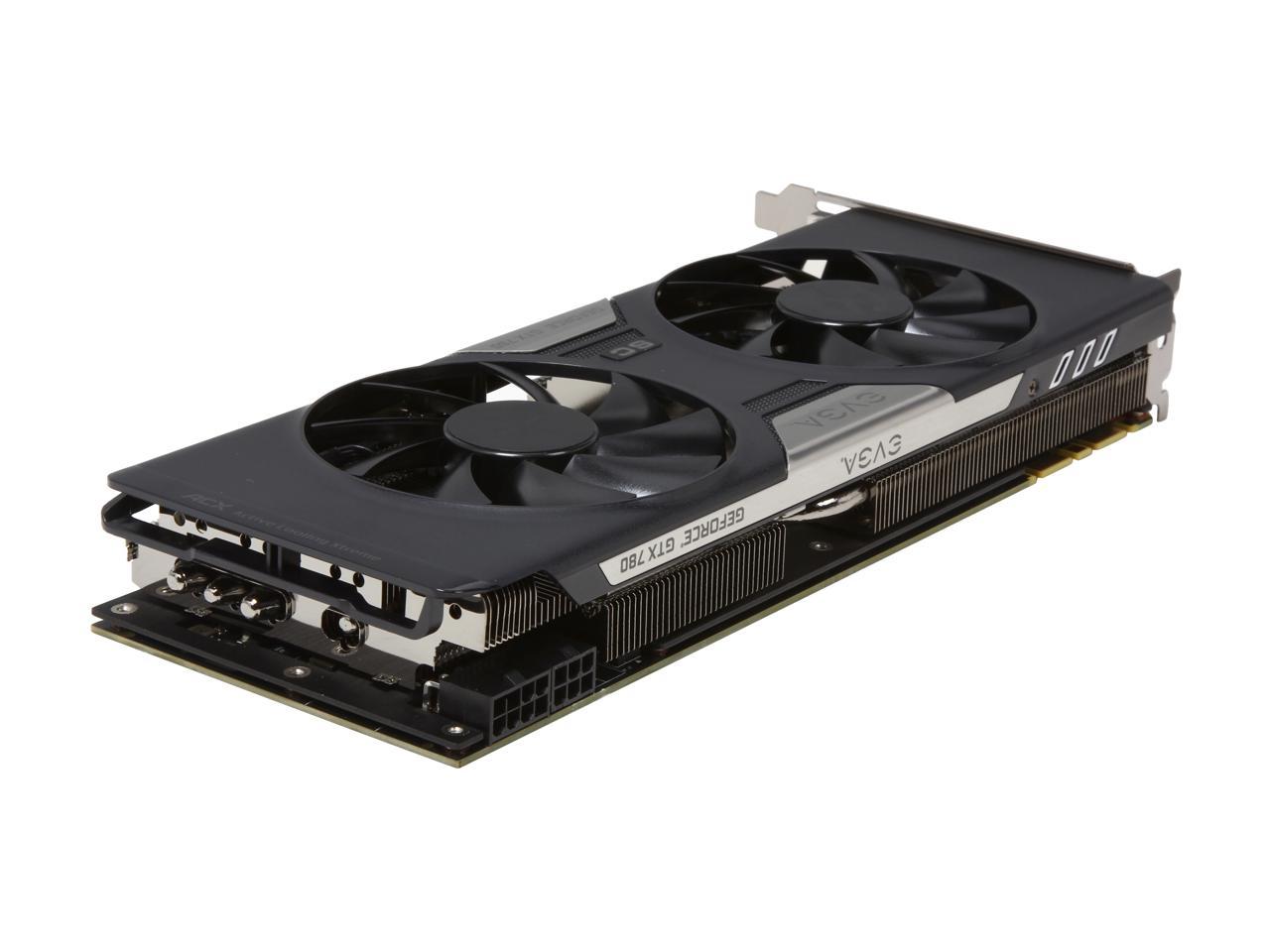 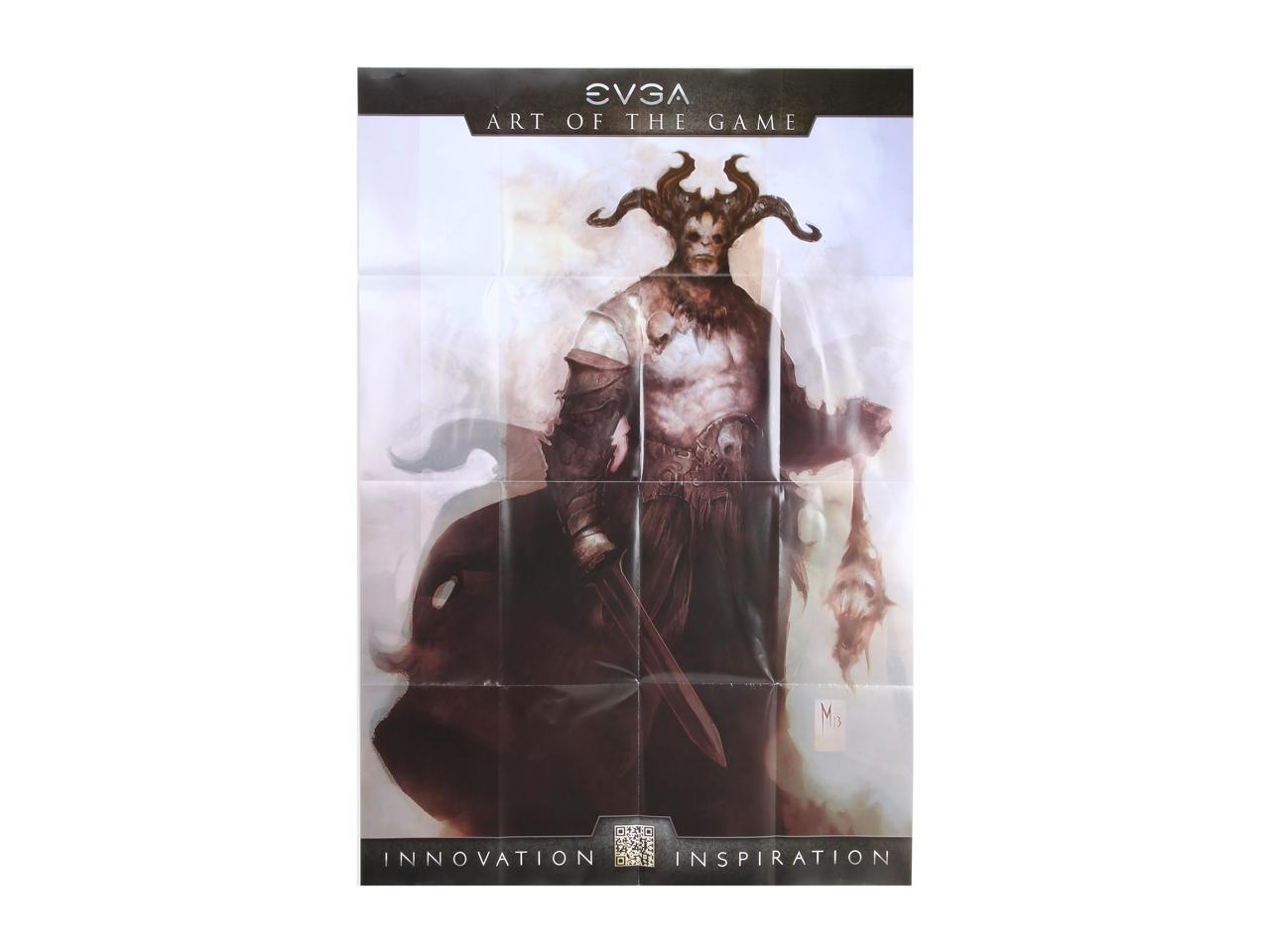 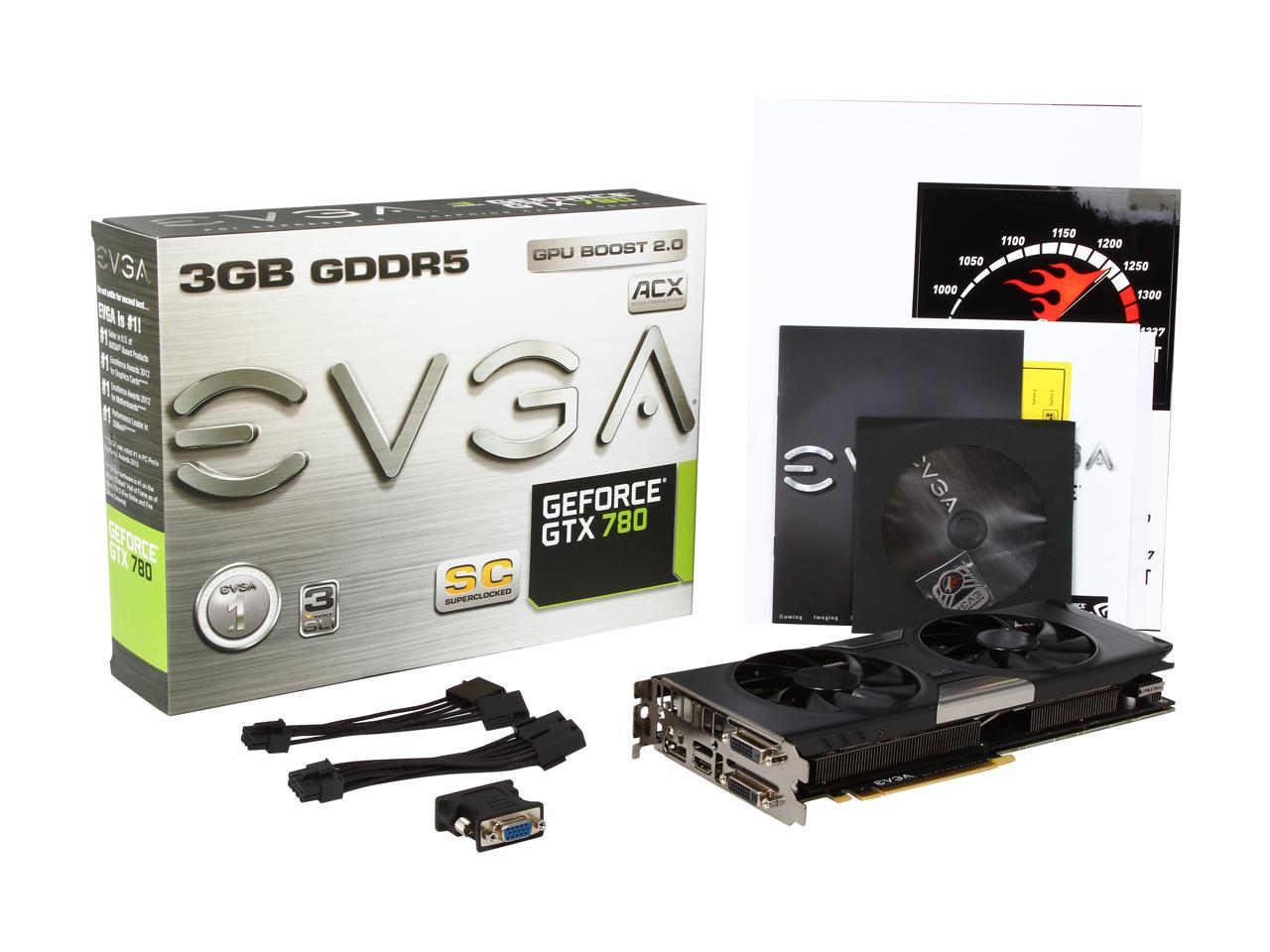 EVGA ACX Cooling – This card includes the EVGA ACX Cooler with double ball bearing fans. With a 40% increase in heatsink volume, the EVGA ACX is more efficient at dissipating heat, with 15% lower GPU temperatures. A reinforcement baseplate maintains a straight PCB, and helps lower mosfet temperatures by 7% and memory by 15%. Pros: Build quality all the way. This by far is the best built GPU I have owned. The metal accents, finish and heat sink appear to be quality all the way. Sitting next to my reference 7950 it makes that card look like a toy. BF4 plays like butter. Temps are 73c without even turning any case fans up. I had trouble keeping my 7950 cool. Not this card

Cons: Cant really think of any

Overall Review: As far as I'm concerned this is the sweet spot for GPU prices right now. With used cards going for to much and the new cards still to high in price this is the card to get. At stock clocks Fire Strike score was 9170.

Pros: Build quality is very good for this cooler and I like the aesthetics better than even the stock Titan cooler. This card is stupidly fast. I'm using two of them in SLI at 2560x1440 and they absolutely chew through everything out there. I'm even getting 60fps in Crysis 3 campaign maxed out with 2xSMAA which is just incredible to behold. Metro:LL, Battlefield 3, Arkham City, Witcher 2... nothing challenges 780 SLI on a single monitor. This card is just a tiny bit faster than a Titan for $660. The cooler is fantastic! Keeps both cards in SLI well under 80C, so there's no throttling back of the clock speeds due to temperatures, and it's VERY quiet. I barely ever hear the cards. tl; dr --> This card is faster than the Titan for 2/3rds the price and dead silent even when you overclock it. It's a no brainer purchase if you are gaming above 1080p and have the money.

Cons: Just a couple things to mention here, and they're not that big a deal overall: 1) The build quality, while good, could be better. In particular, I wish the card had a back plate. It doesn't flex a lot when installed in the PCI-e slot, but it flexes a little bit and a backplate would help 2) The bundle, if you want to call it that, is utter junk. I mean come on... a DVI-->VGA adapter? Molex to PCI-e PSU cables? 6 pin to 8 pin PSU cables? Let me put it simply: None of those things belong in the box with a $600+ card. If you need any of those things, you have no business buying a card like this. EVGA should put in something useful instead. Also the price is a bit high, but you already knew that if you're reading this. At the time of this writing there's about a $100-150 "lulz AMD can't touch this" tax that you pay for this card. I'm OK with that on this particular model since it's faster than the Titan out of the box.

Overall Review: I "upgraded" from a pair of 7970 Lightning cards because I was tired of how loud the Lightnings were under load even at stock and I was tired of having to work around all the microsttuter problems that crossfire has. Couldn't be happier with my purchase. Very quiet and absolutely dominates the most demanding game released in Crysis 3... I'm thinking I'll be set with these for many years to come. My other system specs: i7-2600k @ 4.8 GHz ASRock z68 extreme7 gen3 16GB DDR3-2133 Corsair AX1200 CM Storm Trooper

Pros: Solid performance boost over the MSI 7970 TwinFroz IV this card replaced. Much quieter as well. Card is good all-around and encroaches the performance of reference Titan cards. Installed in an MSI Z77A-GD65 Gaming Motherboard and running Windows 8 Professional.

Cons: I encountered no cons whatsoever.

Overall Review: I only installed the base Nvidia Driver and Physx Driver from the Nvidia website, the 320.49 version. I did not install the Nvidia GeForce Experience or the EVGA Precision software. I have an H100i from Corsair installed and I the Corsair Link software to control the card fans in tandem with the 5 case fans. Makes things simpler. Also, I did this to limit potential problems that I had read with regards to Nvidia driver conflicts and EVGA Precision conflicts. My recommendation is to keep it simple at first before adding the onslaught of unessential applications.

Pros: This is an update from my previous review. I did and RMA with EVGA and have just got the NEW card back. It works just fine. No problems in Skyrim that I had with the first card.

Cons: With the first card I had a problem in the game Skyrim where it would hang for 10-20 seconds. I installed EVGAs OC Scanner II software and was running it when the PC abruptly died. I tried to restart it put it would not start. I tried the card in several other PC's and same thing, they would not start either. So I'm thinking the BIOS probably got messed up some how.

Overall Review: To open and RMA with EVGA you first have to send an email to their Support Team. Then they tell you if you can open an RMA. I sent the email and got a response back within 12 hours telling me to open an RMA. I did this and got a response back again within 12 hours saying that it was approved. This was all on a weekend. The instructions for sending the card back said to just send the "product" no packaging or parts. I thought that I'm probably going to get a refurbished card. Which was ok if it worked. I just got the GTX780 back and was pleasantly surprised that it was a new one in the cellophane wrapped box with all the parts inside. I have installed it and did not have the problem in Skyrim that I had with the first card so I'm very happy. I can't say enough about EVGA customer service. Their Support Team did and excellent job in my case and I would buy another EVGA product anytime.

Pros: This card is without a doubt the best investment I've ever made in my computer. I was unsure of how well this card would push my system because I am still using an old AMD 965 @ 3.9, however I have been nothing but impressed since the first time I fired it up. For sake of reference, on BF4 I went from around 30 fps on med/high settings, to around 75 on max! I couldn't believe the performance of this thing! Every single game I throw at it runs at 60fps+ with almost no issues. The one game that has failed to do this for me so far is Rome 2, but in that case I think we can blame poor optimization. On top of the cards amazing performance, the thing stays quiet-and-cool with no problems at all. Even with all the power, this card is much quieter than the AMD 6870 that it replaced. Even at the maximum load I can push this to, the card is still barely audible, which may speak negatively about the rest of my cooling setup.

Cons: There is a very slight coil whine to the card. For perspective, if I run a demanding game for 6 straight hours, the coil whine occurs for maybe 5 minutes of that. Not a big deal to me at all and a short amount of research says that the coil whine usually goes away over time with use. Honestly isn't a big enough deal to me to subtract an egg off of this amazing card.

Overall Review: Power, noise, cooling, this card excels in every single aspect. It is a bit expensive, but if you are looking to upgrade and have the cash to spend, BUY THIS CARD. I guarantee you won't be disappointed.

Pros: Chews-up any game thrown at it. You can literally run anything as long as you have a CPU that won't bottleneck this beast and the HD space for your installed software. EVGA has set the benchmark for super quality with this card.

Cons: The price. That old saying "You get what you pay for" is really applicable in this case. Also, make sure your case can support this beast as it is almost a foot long and does require ample space for proper installation and cooling.

Overall Review: My PC is a Puget custom built gaming rig. I'm running the following specs: AMD 8350 FX unlocked CPU @ 4.0 Ghz 8 gig Kingston DDR3 1600mhz EVGA Geforce GTX 780 This card is an upgrade to my ASUS Geforce GTX 660 OC'd and I must say, the difference is noticeable right away. Playing games such as Skyrim, Shogun 2, Rome 2, WoW, Assassins Creed Black Flag, etc. is smooth as silk using this monster. To give you an example: In Skyrim, I'm using over 139 mods including Sharpshooters ENB graphics preset, 1768x992 resolution (my old eyes can't see well as of now) and in battles, with more than 5-12 enemies on screen I'm still getting 55-60fps steady (my game is capped to not go over 60fps as Skyrim doesn't like running much faster than that). Using the mod "Deadly Dragons", with 3 dragons on screen, 2 giants, 4 mammoths and 2 followers along with 3 wolves...55 fps. BEAST!!

Pros: Outperforms my old 570 SLi setup. Running 3 monitors: 5760X1080p ( sweet ) Runs on HIGH settings. Crashing on Ultra. Should be able to tweak to run a bit better. Good tips on evga Forums, under GTX 780 and/or BF3. Will use half the power of SLi, and deliver more FPS on higher settings, than my old 570 SLI setup. Saves $. ACX Cooled SuperClocked version may beat a stock Titan!

Cons: Needed to convert my existing Motherboard's BIOS, from the old ".ROM" format to the new ".CAP" bios system, as used for Windows 8. Card did not run at all, under the old motherboard BIOS. ( Notice in card's box warns of this. ) Had to Convert the old BIOS via ASUS software, then update the Mobo bios, and then this Geforce card's Bios. So lots of mucking about. Runs great now. - Expensive card. Hard to justify it, but hey ... I'm worth it. - Tech knowledge definitely required in these cases

Overall Review: WARNING:I had to update the motherboard BIOS, before this GTX 780 card would boot, Check to see that your motherboard has, or may be updated to, the newer .CAP format of BIOS, or you may not be able to run this card. That was my experience anyways, on an Asus P9X79 Pro motherboard.

Pros: Wow. I've tested the GTX Titan before and there is such a small difference I don't know why you'd buy one when this 780 exists. It will consistently do 54.9 FPS on Heaven Bench 4.0 (Maxed). Still maintains temps and low noise levels at load. If you're on 1080P, even with 120Hz 3D monitors, you only need one of these cards. It's finally the card than can handle every game I've thrown at it (Skyrim, New Vegas, BF3, Crysis 3) at max settings for 1080P. It will do 2560*1600 too but then you lose out of the buttery smooth frames. Just buy it, it's the best all in one solution, and the card isn't even that long.

Cons: I would say power draw but the truth is this is an enthusiast level product so that's to be expected. Maybe there will be some later but for now, This card is perfect.

Overall Review: I'm considering buying a second when the price drops $50. Only because I want to start gaming at 2560*1600. At 1080P, there really is no reason to buy a second. This card is the most amazing one I've owned. It makes my old SLI 570's look like a joke.