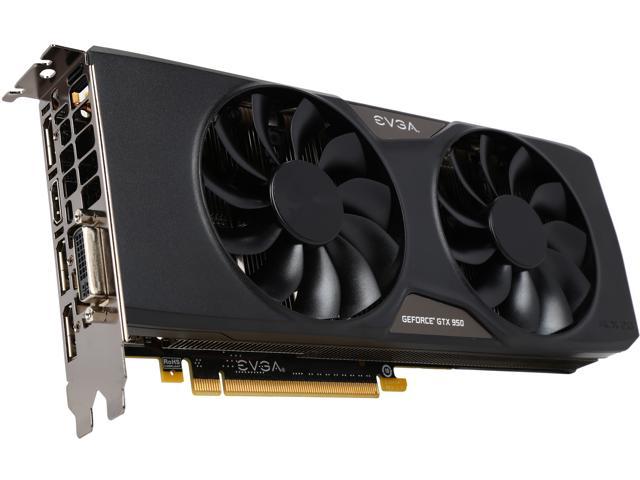 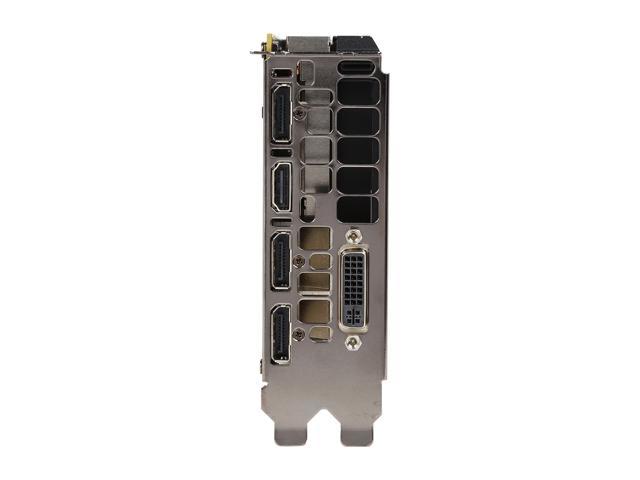 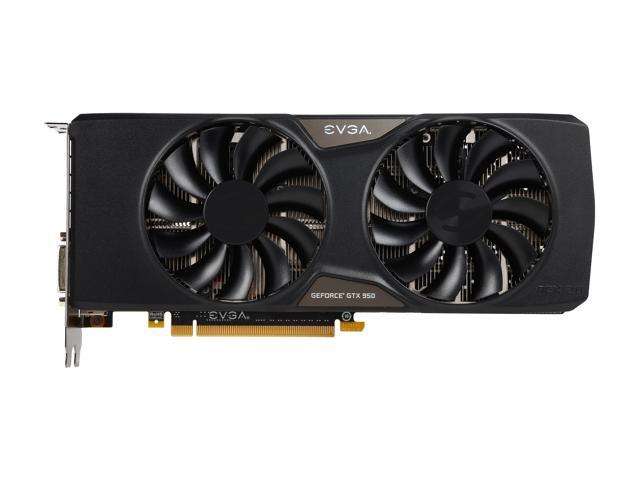 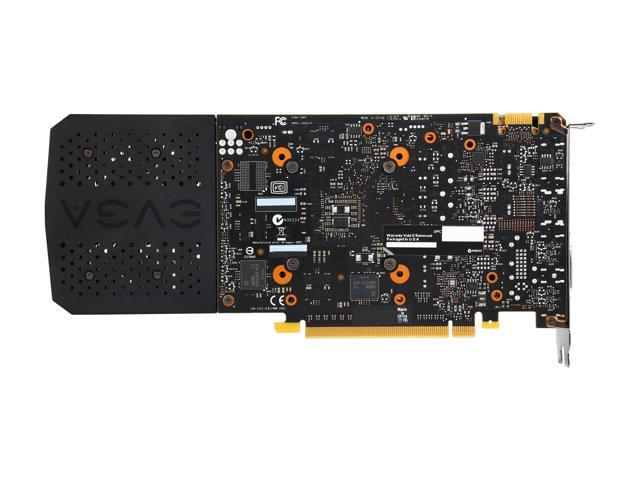 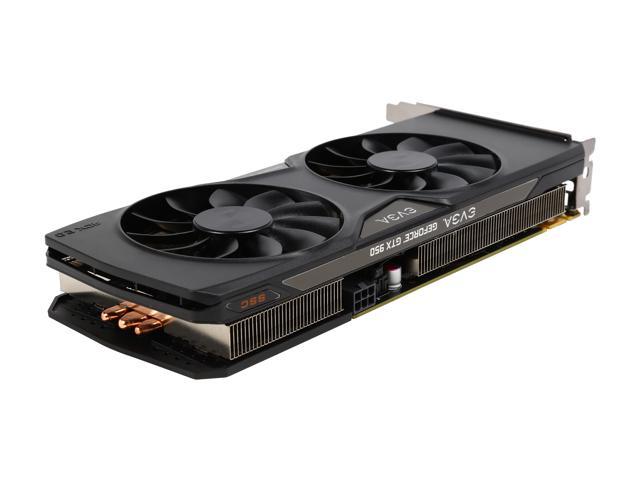 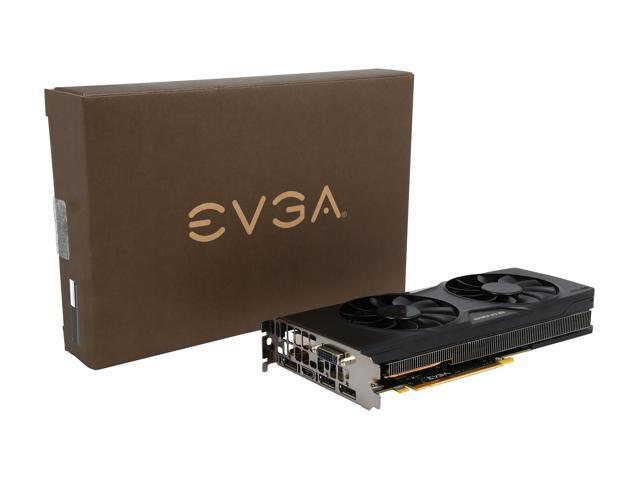 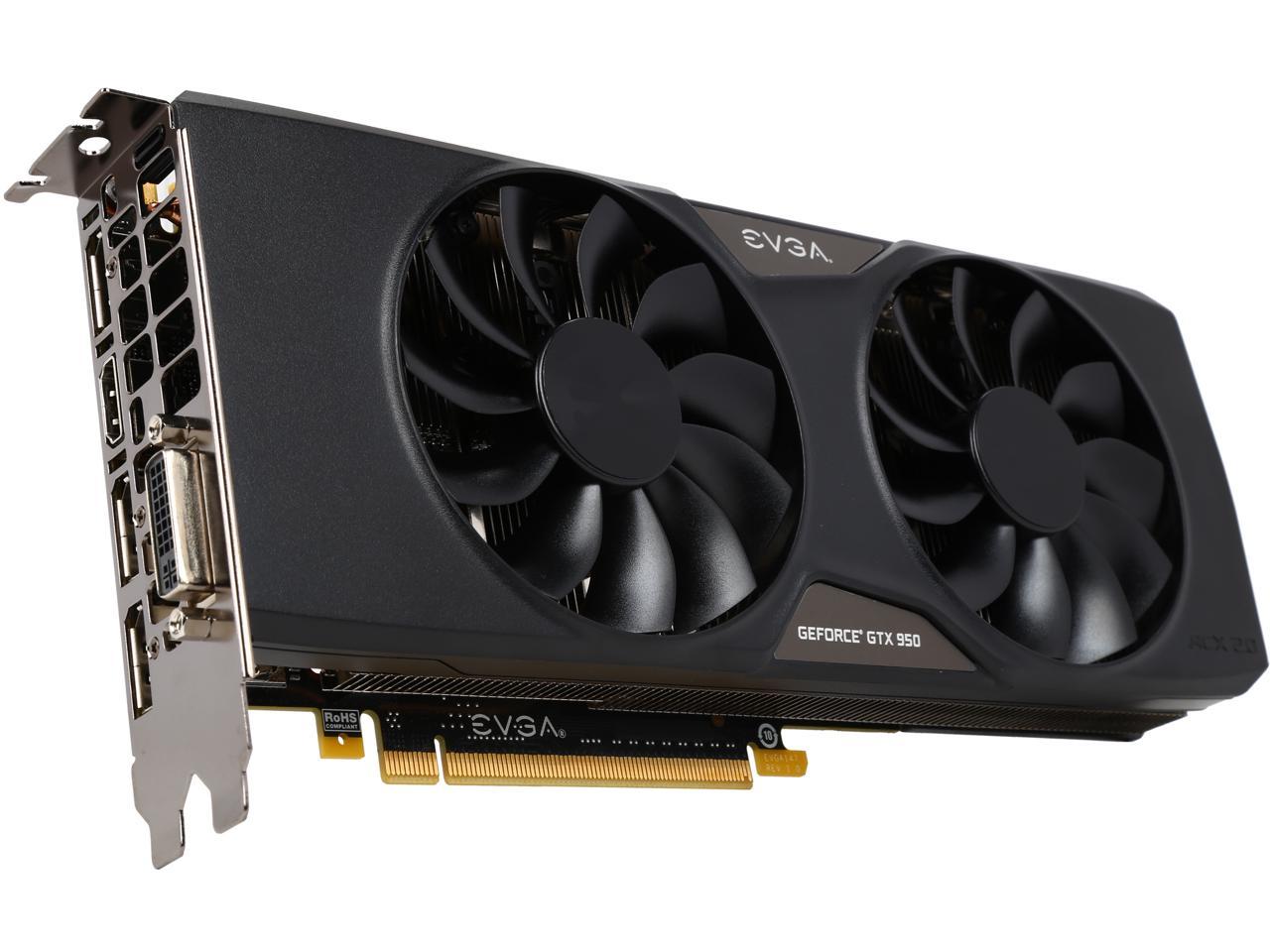 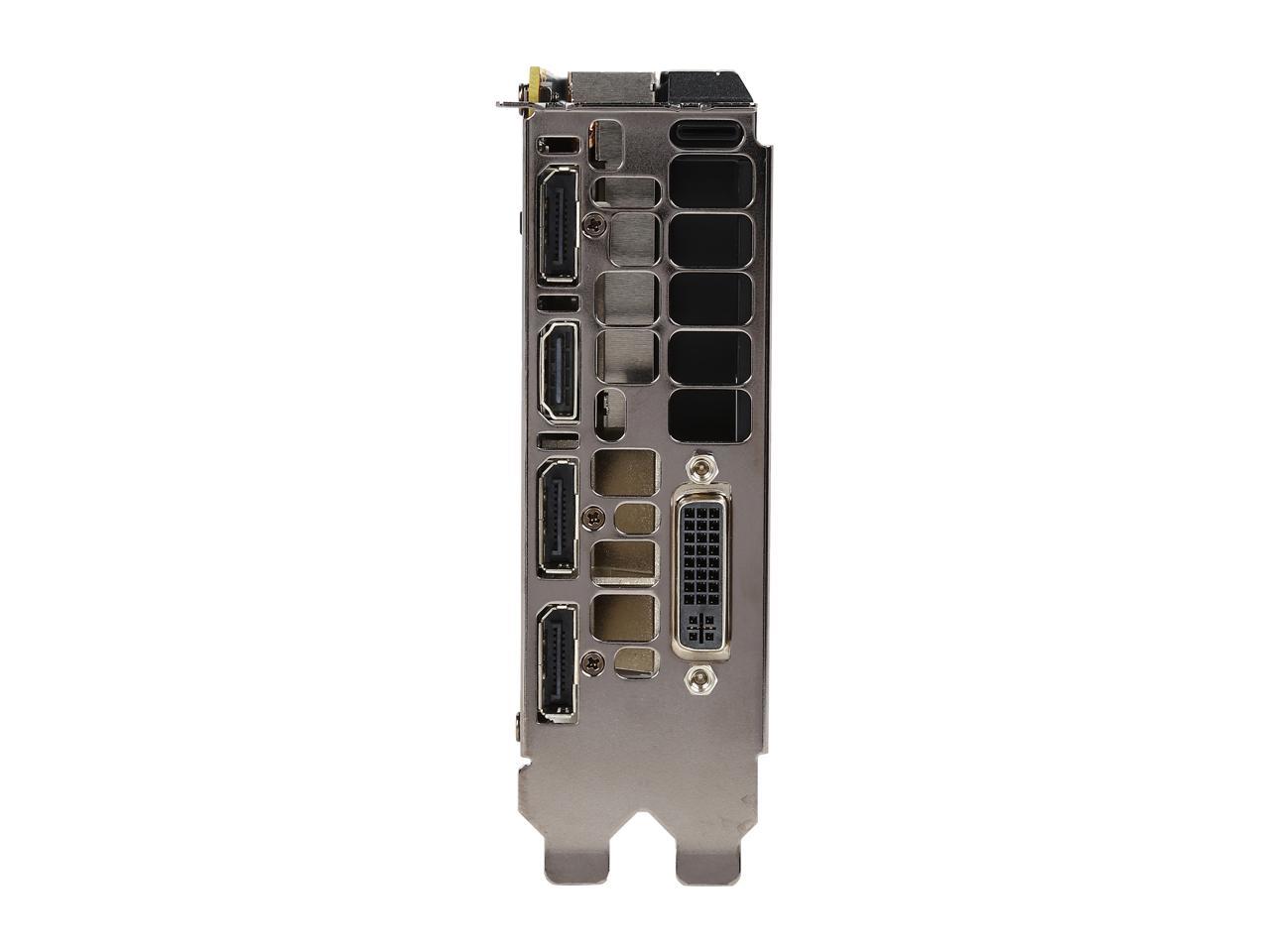 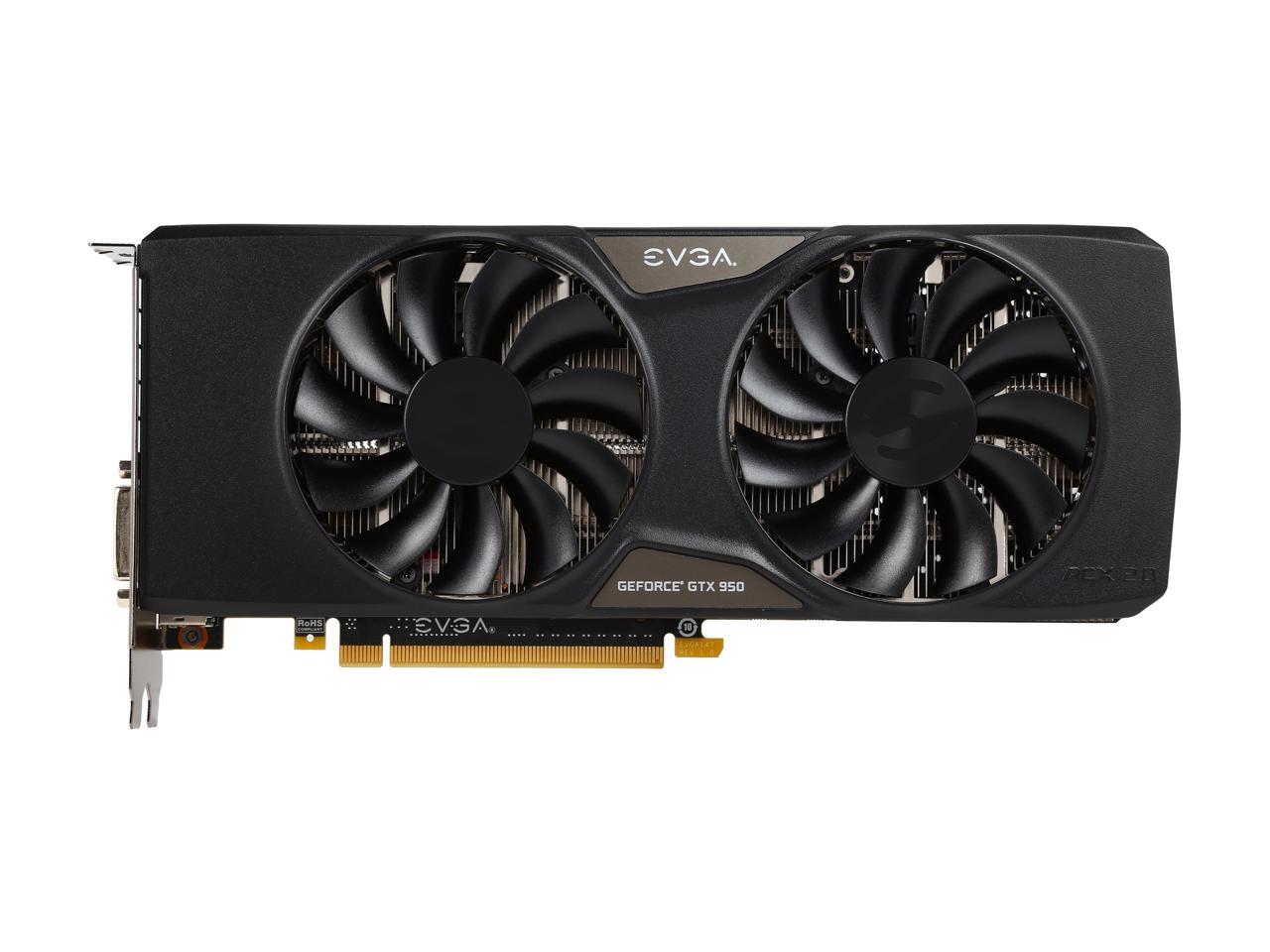 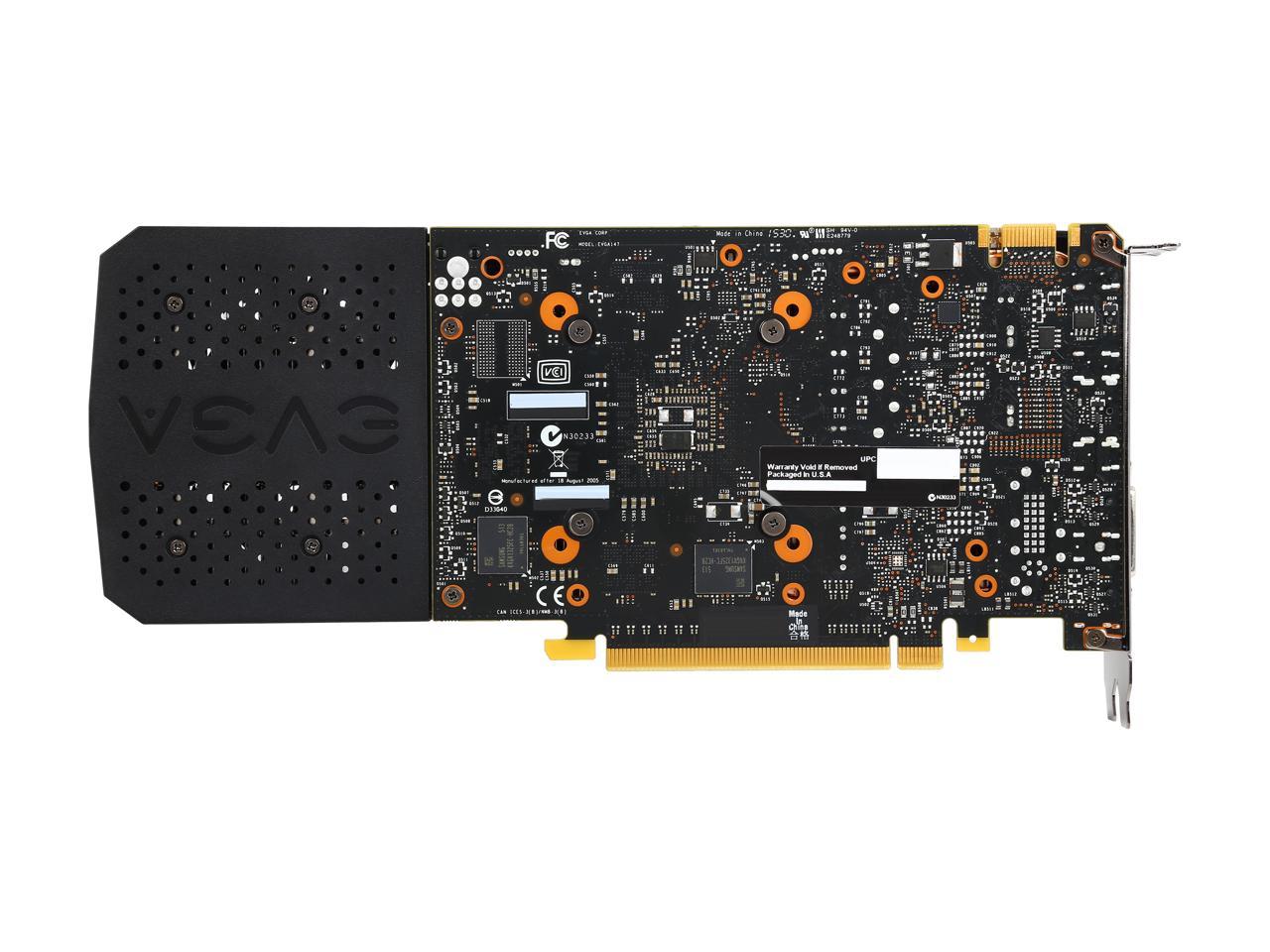 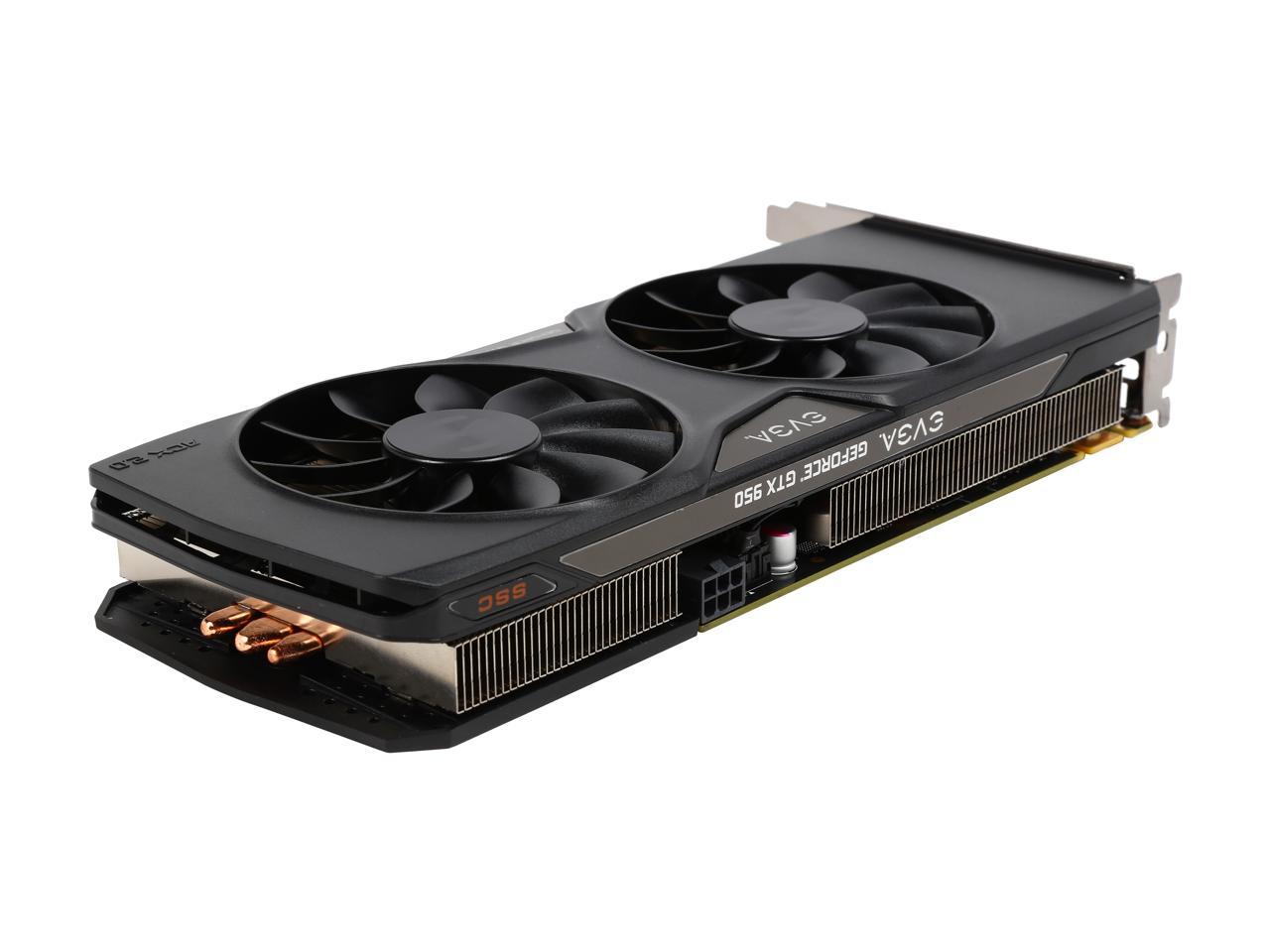 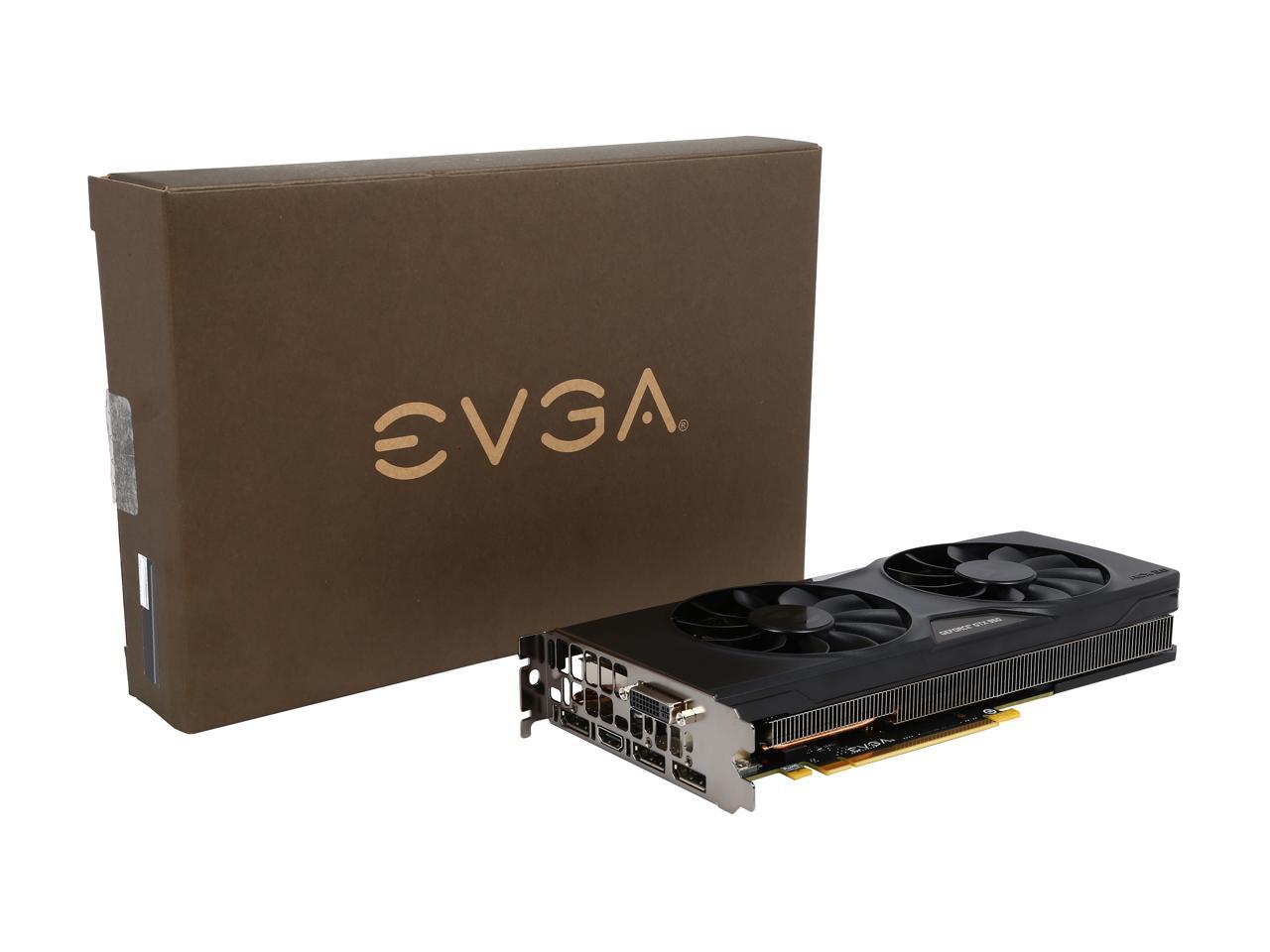 This means the product was tested and repaired as required to meet the standards of the refurbisher, which may or may not be the original manufacturer. Any exceptions to the condition of the item outside the manufacturer’s information should be provided in the listing, up to and including warranty details.
(29) Write a Review
See more "nvidia gtx 950"
In stock.
Ships from United States.
Most customers receive within 2-6 days.
Overview
Specs
Reviews
GeForce GTX 950 SC+ ACX 2.0 Advanced Gaming

The EVGA GeForce GTX950 is a true gaming GPU designed for every PC gamer. It's built to the exact specifications of the GeForce GTX family and powered by NVIDIA Maxwell - the most advanced GPU architecture ever created - to deliver 3x the performance of previous-generation cards. *More powerful than any console, this card delivers a truly interactive, cinematic experience in the latest games with advanced effects driven by NVIDIA GameWorks and DirectX 12.

Ready to get real about gaming? Experience the performance of the new EVGA GeForce GTX 950 today.

Maxwell's exceptional performance and efficiency means you can transform your basic PC into a modern gaming rig that can play the latest games at 1080p. Pros: + The GTX 950 is a great value card.<br>+ It's an even better value when refurbished.<br>+ It has a 1-year warranty.<br>+ The fans do not spin at idle, and barely make any noise when under load.

Cons: - Have experienced some screen flickering at idle, not entirely sure the card is at fault at this point. (Update: It wasn't the card, it was my motherboard)

Overall Review: I've got this in a Dell Precision 690 with two dual core Xeon 5160s. This motherboard has a single PCIe 1.1 x16 slot, and was made in 2006. It's rather impressive to me that this modern card will still work with it.

Pros: A better card than I originally set out to purchase. I was looking at 2gb 750 Ti series. Couldn't find a better price for any 9 series card. Nice performance boost over my old 1gb MSI GTX 750. Fits fine in my micro ATX mid-tower.

Cons: I suppose the one con is that it is "refurbished" but I have used refurbished items in the past with incident. My current motherboard made by Asus in a refurb, never had an issue.

Pros: - 20 bucks cheaper without rebate than the same model. - ran, it actually worked out of the box - one year warranty from evga - clocks pretty well i got about 80 extra on the offset and stable - temps, 65 is average with the default fan curve , mine about 63 and it is dead silent game list: -tomb raider 2013( ultimate settings) the benchmark gave me a average of 55 fps.(1080p) -league of legends 4k with dsr no issues at all 60fps maxed out( i run all my games at 1440p that arent intense) -csgo 1440p- 100 fps average maxed out -fallout 4 auto set to ultra and it feels smooth.(never watched fps) -just cause 3 ran at medium with geforce experience, not bad considering the game eats up everything(friend has a 980 and can barely run high- max) -all the metros ran auto at max settings -bf4 ultra- smooth cant say fps but smooth - smite 4k dsr maxed out, no issues and scales great unlike other games.

Cons: - the price, sometimes you can find it cheaper but not often -its a 6 pin pci-e card with the ssc logo which is a 8pin pcie card, i feel cheated here but what can i do complain tilli get a ftw version free ? not worth it . the ssc cooler on a sc+ is my only gripe oh and that no leds but geforce still gives the options of leds.

Overall Review: no issues and i plan to sli in a few months to give my self a even better gaming experience. my rig: core i7-2600 n520 cpu cooler rog maximus gene v 8 gbs of ram gtx 950 2 hard drives 700w thermal take psu(complete overkill used it for a 6990 which i upgraded from.) coolermaster n300 case

Pros: This is a great GPU. Plugged it in, plugged in hdmi monitor and started up. Had to change Display properties to 1920x1080 as default on install was 1024x768. No big deal. I actually had it overclocked using EVGA Precision X 16 overclocking software (ONLY a tiny bit... It's already OC'd from factory), and had to just put it back down to 100%. I did however throw the fan curve into Aggressive since I have a 500w psu. You do have to go to the EVGA website and download the new driver from this year for it, and after that's done, I had to enable vsync and play my World of Warcraft in 32-bit mode instead of 64, but that's a Blizz issue/workaround with better cards. I decided to test it hardcore with a PS2 emulator, G.. of War@60fps in 1080, and it was amazing (despite the PS2 graphics). Heaven Benchmark on Ultra went at 30-40fps, World of Warcraft: Legion - 60+fps on Ultra with Vsync on, FFIX (PC) - 60fps, Kingdom Hearts2 - 60+fps on Ultra using PCsx2 with all highest settings and highest audio buffer. I only have an I3-6100 and 16GB RAM, but it works wonderfully. And for barely over 100 bucks, this thing is DEFINITELY worth it.

Cons: This thing is HUGE. Had to do some cable rerouting in my ATX tower. Uses to back panel slots and covers up one of my PCIe ports (I have my wifi adapter on the bottom 2nd port), and I had to do some cable re-arranging so that the PSU cord wouldn't hit my side panel fan, but otherwise so far there aren't any. I highly recommend this for anyone wanting to make a budget gaming PC that will blow the smoke out of the water on most consoles.

Overall Review: After gaming with a retail HP Pavilion (I usually am a big HP fan), I realize I've been missing out by playing on retail computers. Throw this bad boy in there and you've got a mini powerhouse that can make MANY AAA titles run smooth as butter. And when EVGA refurbishes them, they take pride in their work. There are no issues so far with this Gfx card. End with the build, everything's upgradeable. To see the build I'm using: https://pcpartpicker.com/list/4tpYhq

Cons: Had a small piece of loose plastic in one of the fans that was causing some noise occasionally, it was easily removed and have had no problems since.

Cons: Does not come with any adaptors for VGA or DVI or Display port to DVI...

Overall Review: 3 Monitor or more compatibility. 1 HDMI to HDMI to monitor 2 DVI to HDMI to monitors I used this adapter for Display port to DVI: Tripp Lite DisplayPort to DVI Cable Adapter, DP to DVI (M/F), DP2DVI, 6 in. (P134-000) You do not need an active adapter unless you are up-scaling past 1920x1200 e.g 4k. Otherwise passive is all you need. This information is strangely very hard to come by. Also this is 3 monitors in extended desktop mode e.g all independent displays. I have not gamed with this card yet, don't expect massive performance with newer games. But for a 3-5 monitor config you cant beat the performance or price. I hope this helps someone.

Pros: I got this on sale when it was 30% off i believe and it was $94, This GPU works like a charm, No problems at all. Great budget GPU, Would Highly Suggest to anyone who is going to be gaming on a budget

Cons: Just alittle Beefy and covers one PCIE Slot which isnt a big problem for me

Pros: Made a low end system run smooth. Runs 4 monitors for FSX perfectly. Surround view on 2 of the monitors.

Overall Review: I would recommend, perfect solution for multi-monitors.