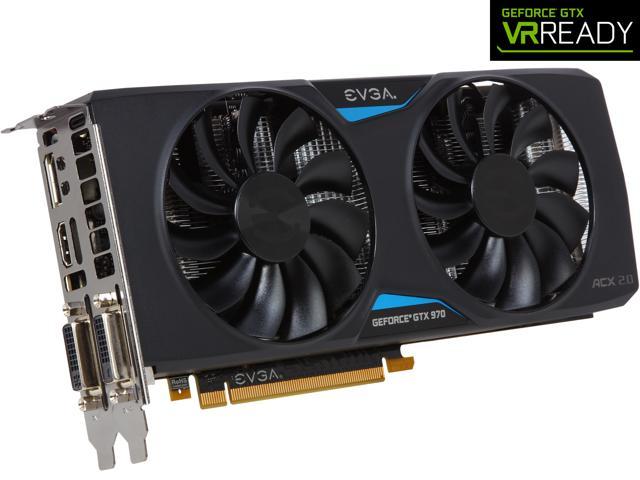 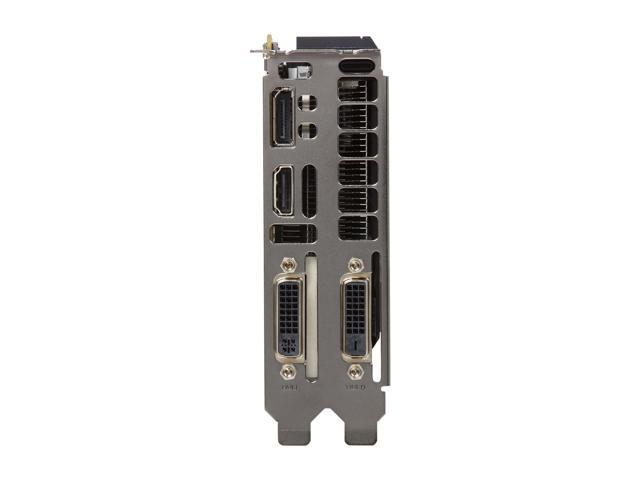 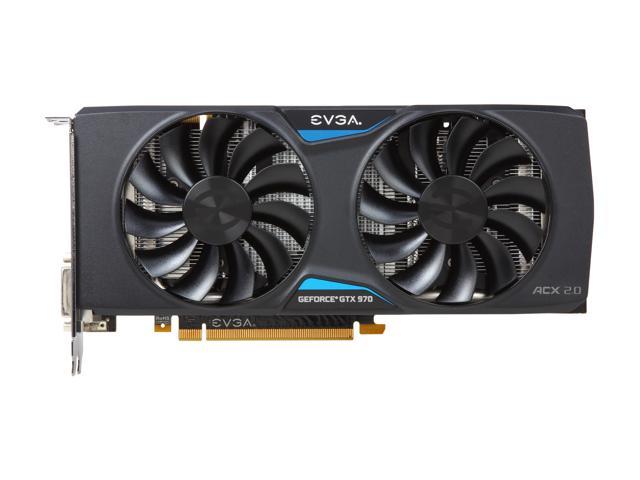 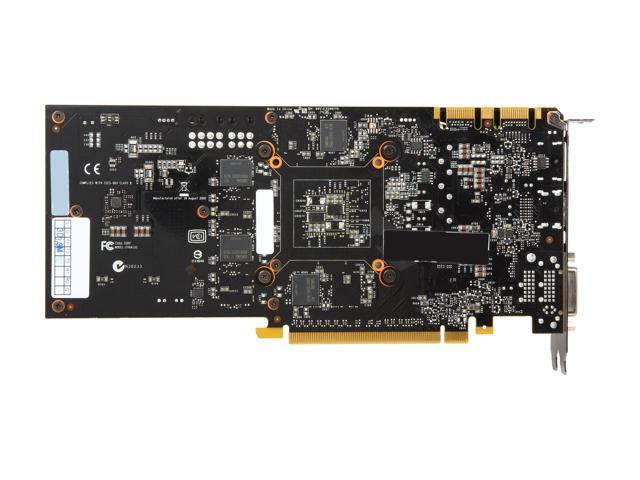 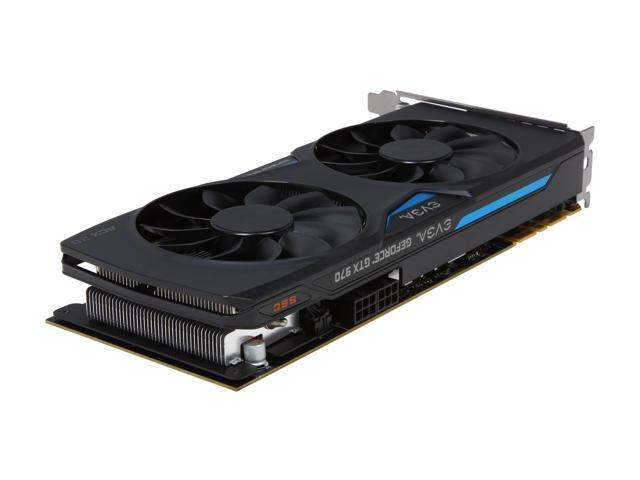 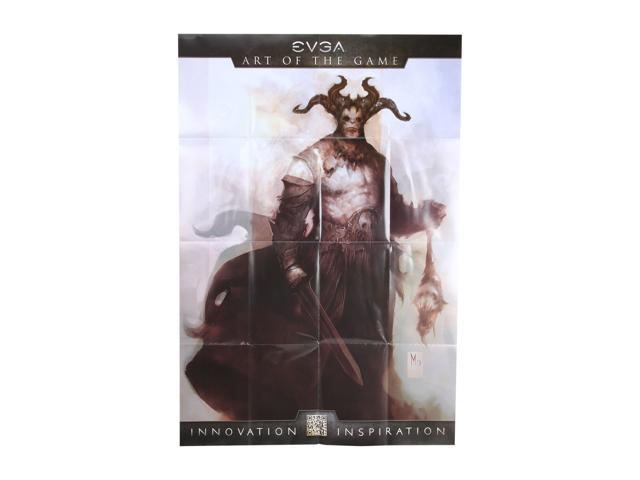 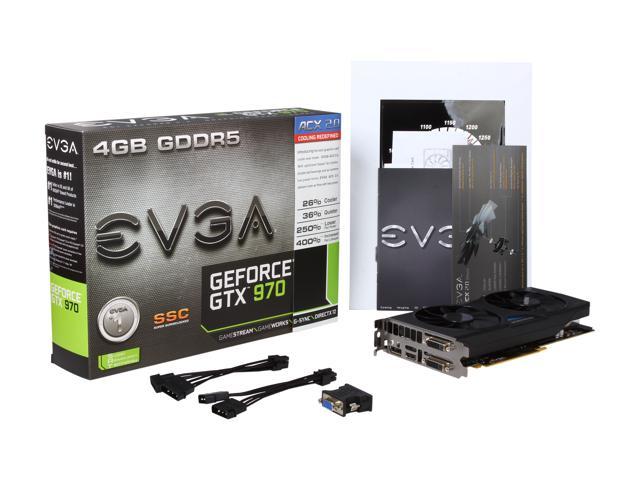 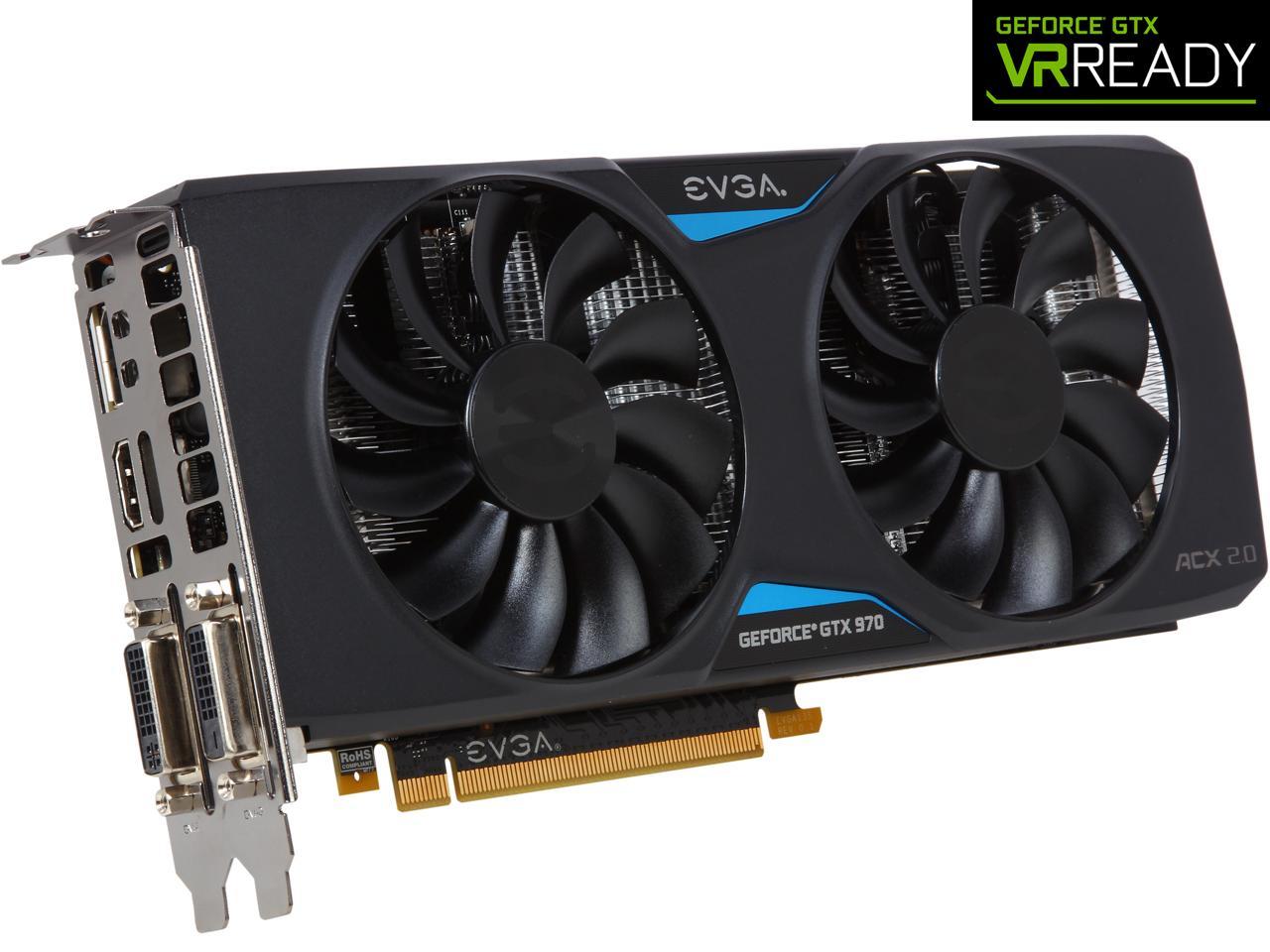 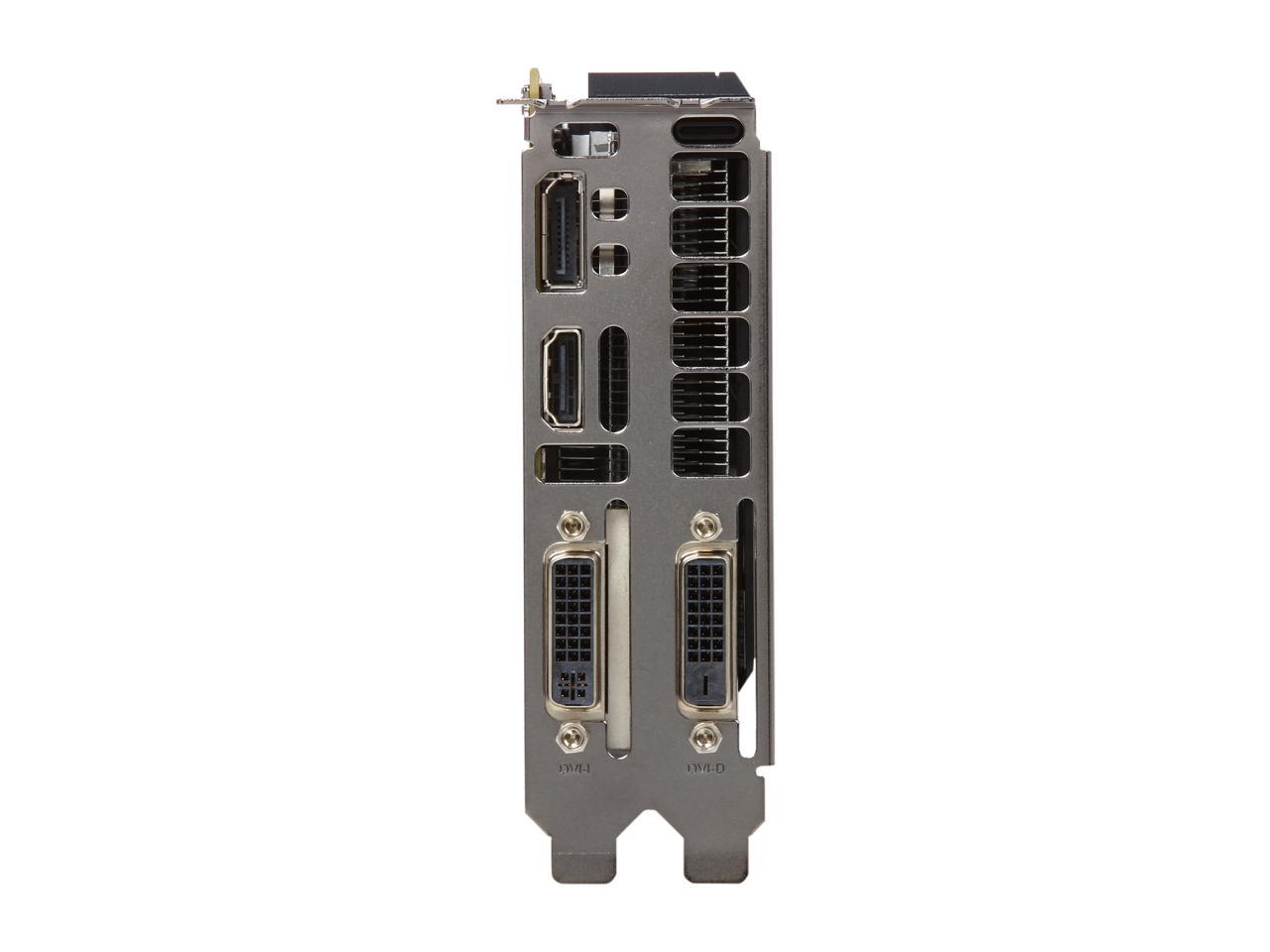 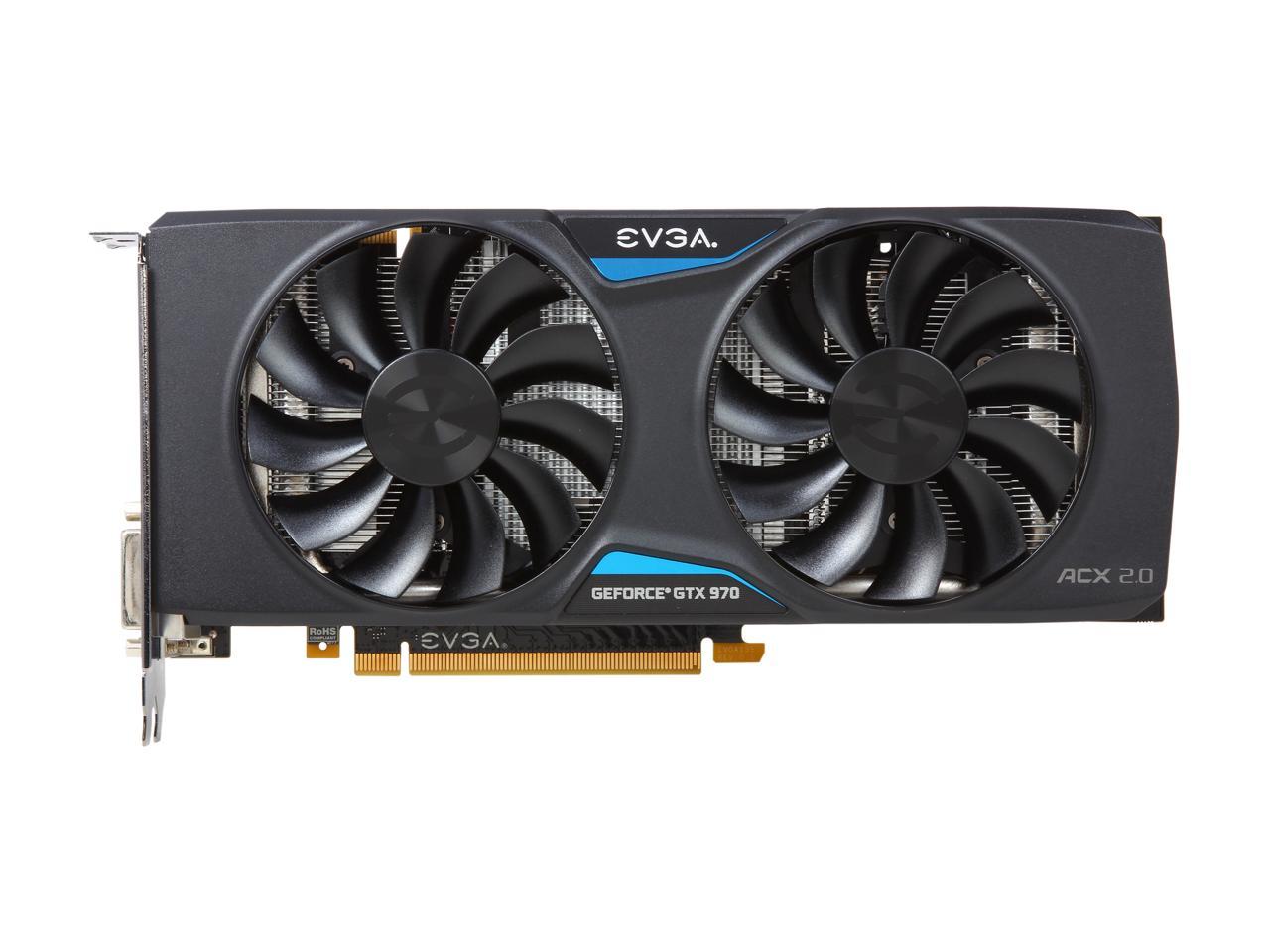 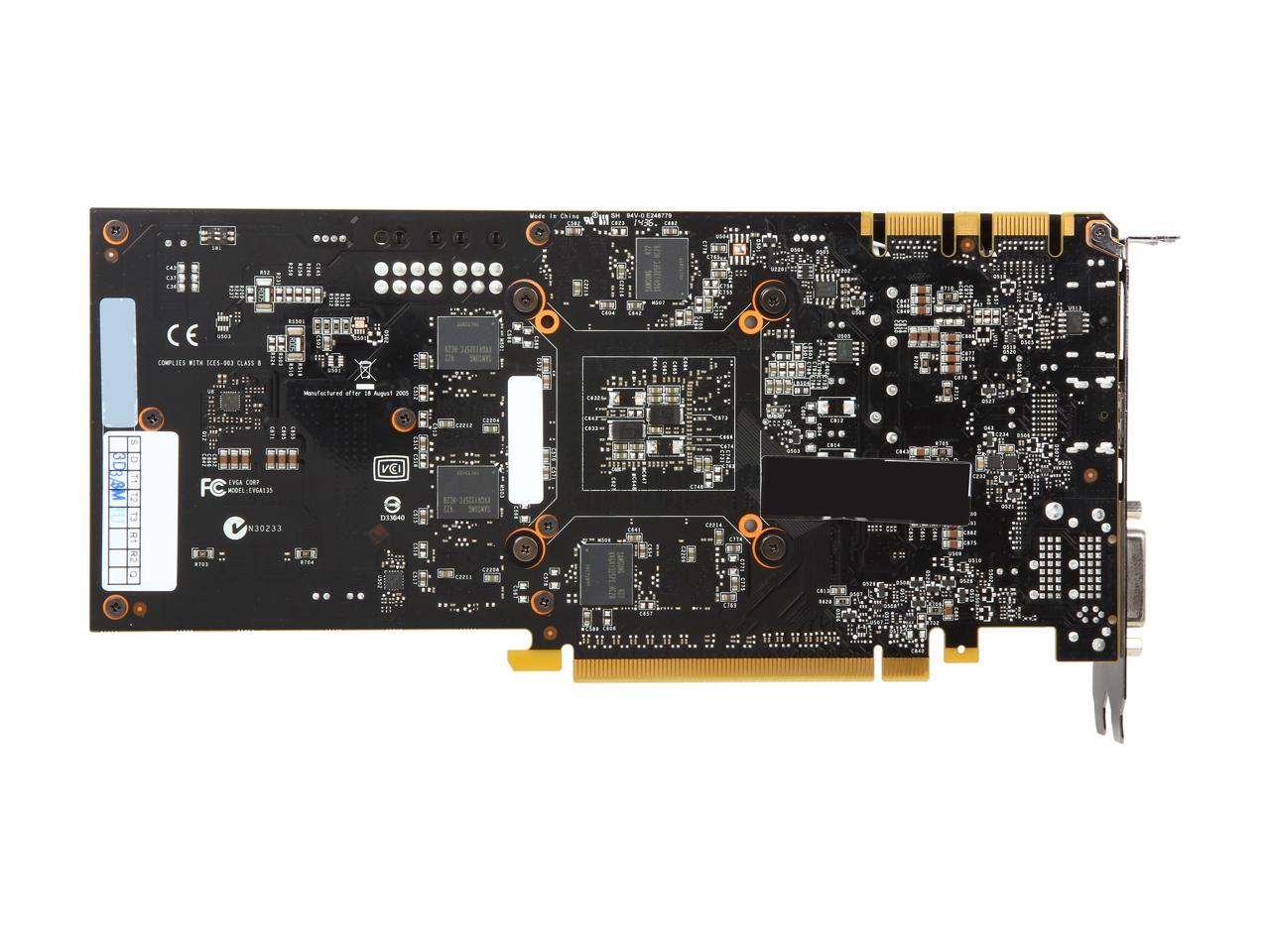 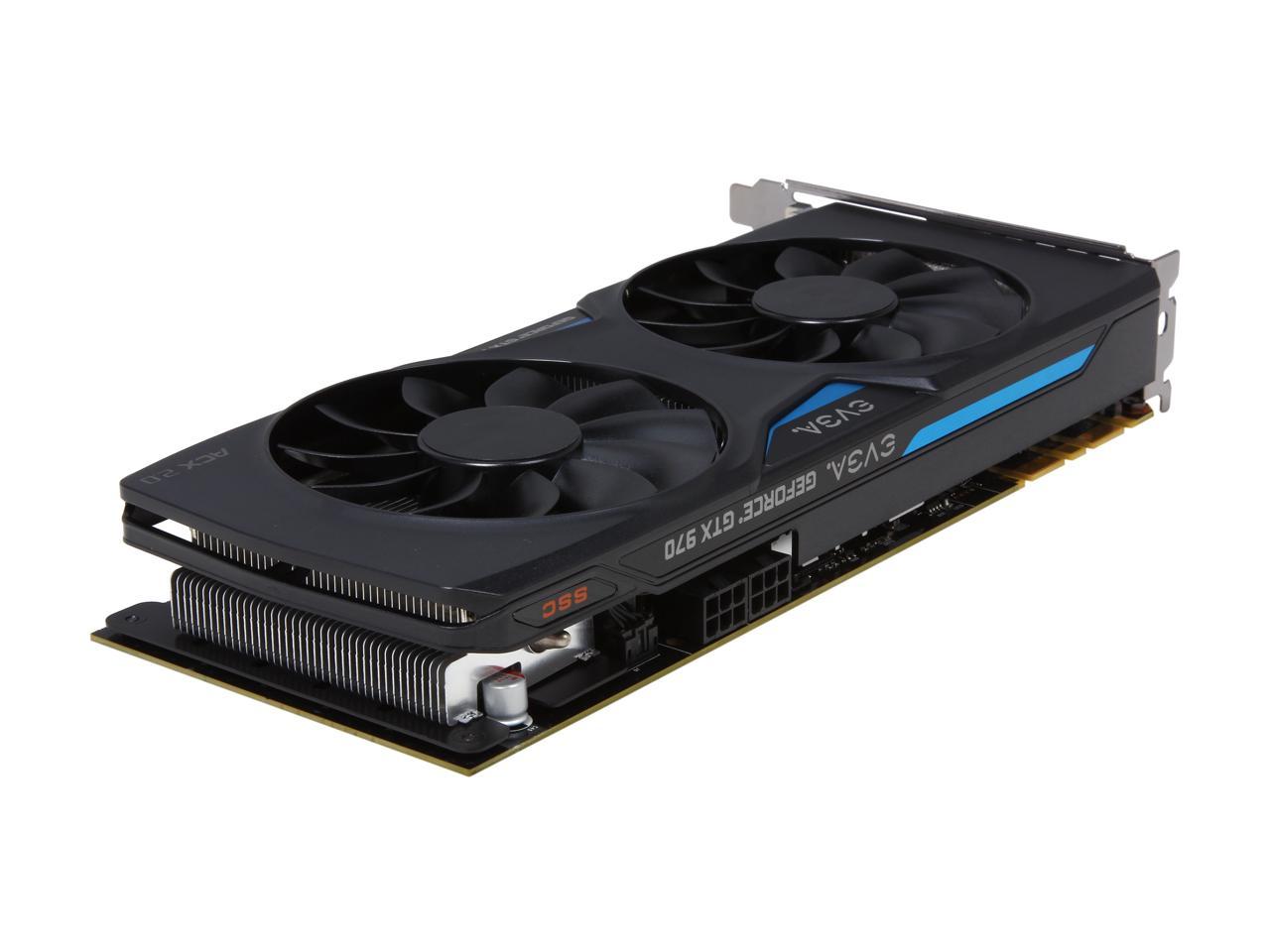 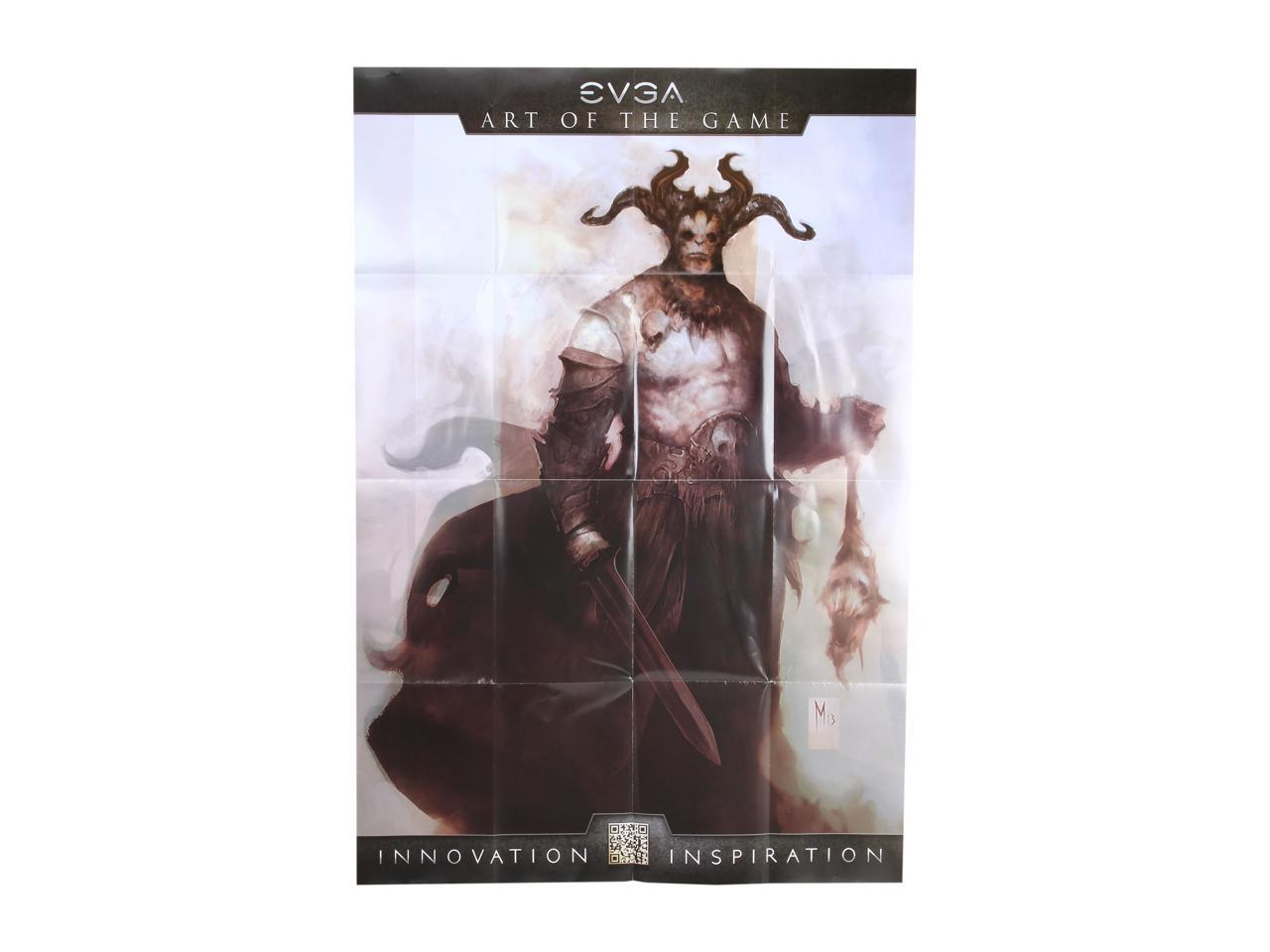 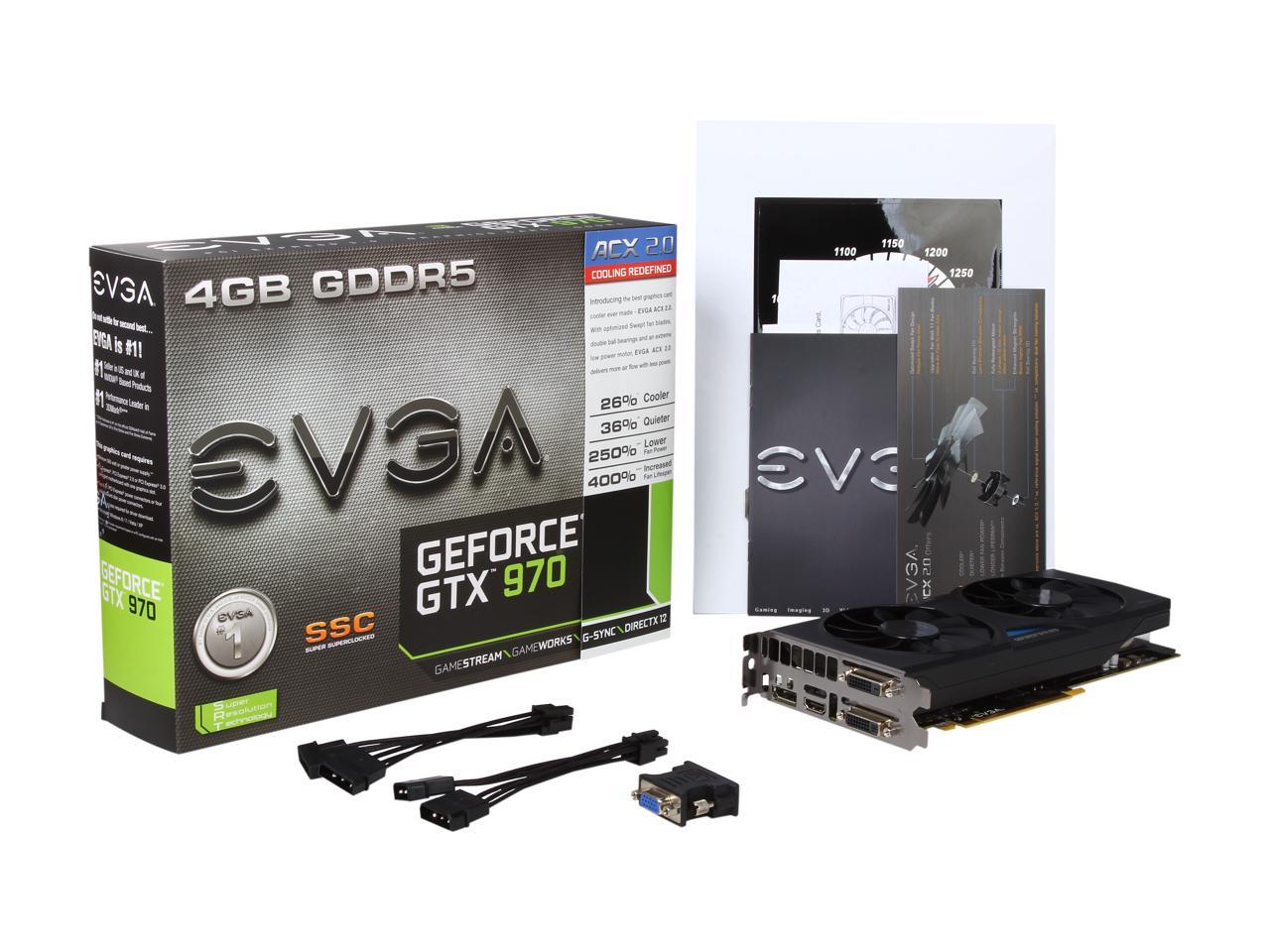 Supercharge your gaming experience with the NVIDIA GeForce GTX 970 video card. The GeForce GTX 970 GPU is powered by the next-generation NVIDIA Maxwell architecture, delivering unmatched performance at incredibly lower power consumption when compared to the previous generation. 1664 CUDA Cores and a 4GB GDDR5 memory in 256-bit width work side by side for game redefining performance. You can play today's hottest titles at max resolutions on today's highest-definition displays, all at ultra settings.

Performance is just part of the story. The Maxwell architecture is engineered with the new VXGI (Voxel Global Illumination) technology to solve some of the most complex lighting and graphics challenges in visual computing. Scenes are significantly more lifelike as light interacts more realistically in the game environment. Super Resolution technology lets you enjoy the detail and brilliance of 4K gaming even on 1080p displays. The G-Sync technology ensures smooth, tear-free images by synchronizing the display frame rate to the GPU (requires displays that support G-Sync). An array of NVIDIA GTX technologies are also built in, like GPU Boost, NVIDIA 3D Vision, NVIDIA Surround, NVIDIA PhysX, and GeForce Experience. These technologies together provide the most immersive and competitive gaming experience possible.

Pros: For those of us with a single 1080p monitor that want an affordable high performance card that will run games well for the next 4 years, this is the one. Incredible performance, low temps. If the fans even make noise, I can't hear it over all my case fans. For those of you worried about the EVGA cooler issues, don't, it's not a problem, especially with this ACX 2.0 model. If you are having problems you can easily modify the fan settings, no big deal. I previously owned the gtx 570 Fermi, the 970 is the perfect upgrade. 10/10 would splurge again.

Cons: I can no longer use my case to warm my house in the winter because my gtx 970 won't go above 60 degrees at full load. Seriously though, I know there's been some criticism of the "cheap" cooler design, which is mostly because it's made of plastic I guess. This is also not a big deal. If you're like me and you only look in your case every 2 weeks to dust, you don't care if your fan's cooling shroud isn't made from stealth fighter looking aluminum. If you like to show off your case, or stare at it all day, then I guess this is a con considering the other options out there.

Pros: Can't beat the performance for the price! Smaller then my Ice-Q 7870 it replaced while having around double the performance and using less power. It's quiet as far as i can tell sitting my my ancient Antec 300 with the side cover off. All in all no complaints...time to game!

Overall Review: This card is right up there with the 8800gt's and 5870's of their day...A great card with a low price point that completely upsets the entire market hierarchy. Theres a reason they are sold out everywhere and this card seems to be built solid with a nice cooler and above average clocks.

Pros: This card uses about 10W at idle w/fans@30%, which is minimum idle per the BIOS. It comes factory OC'ed by a sweet ~14% (~140Mhz over the stock speed of 1050MHz), and the default fan curve in the BIOS is pretty aggressive, so it spins the fans up to loud much sooner than it actually needs to. The ACX 2 cooler is an open-air design, and noticeably lighter than my last card, which was an eVGA 670 FTW. That used more like 16W to 18W, with a blower fan and sealed exhaust ducting to the outside. The 670 was a bit noisier at it's 40% min idle speed than the 970 is, although the 970 fans do have a higher pitch. But yeah, once the fans spin up, they move serious air and get really loud. A BIOS update should be able to improve this by tweaking the default fan curve, and hopefully permitting zero-fan-at-idle. (In the meantime, use the eVGA Precision software, hit "fan curve", choose preset "Quiet" and you're good to go. Or at least wander by the generic nVidia control panel and choose G-Sync (if you've got the right monitor) or "adaptive VSync" otherwise.

Cons: This ACX 2.0 cooler design distributes more thermal load inside the case than the blower designs do. If you've got a good rear case fan and/or PSU fan, you should be good-- otherwise consider going with something a little closer to the blower/sealed exhaust design. If you're doing 4k rez, consider getting the 980 instead. Although these 970s still have most of the advantages of the 980 at a really sweet price/performance point. Maybe you get a backplate if you ask for one?

Overall Review: The nVidia 970 is a boomstick. I just switched up to 2560x1440 rez from 1920x1200. My 670 was a champ at the lower rez, and was doing OK for some things at the higher rez but it was also running at ~75+C and the 2GB of VRAM was starting to get tight for Skyrim+mods, much less Shadow of Mordor or Witcher 3 coming up. I wasn't expecting to see a change in rendering quality in Skyrim, but there's a big difference in water translucency & reflections, and the banding effect / stippling of shadows cast from objects sometimes seems to be fixed. Better texture compression? Tweaks to ambient occlusion? Dunno, but I like it. Tried enabling DynamicSuperResolution with 2x; that worked OK in Skyrim, but the performance hit was enough to drop FPS into the 40s. But DSR looked very nice in Batman:AOrigins, X-Com, and in Space Run, nicely cleaning up and sharpening minor textures, and they all were able to run at 2560x1440@60Hz. I ran Heaven Extreme in a loop (great music, BTW). Set the fan curve to 30% all the way out to 79C, and then to 50% at 81C. The card went right up to 78-79C and sat there just shy of the thermal point without its fans speeding up for over 70 mins. My CPU fan and PSU fan spun up some (the first was normal with the 670, but my PSU fan usually never leaves idle). System power went from 100W idle up to peaks of 350W, although ~300W was more usual. Eventually, the whole case warmed up enough that the GPU fans needed to speed up by a notch, and then it stabilized there for longer than I was willing to test. I'm pretty sure that if you wanted to run this at stock 1050MHz speed, rather than the factory-overclock 140MHz, then you could leave the fans at 30% forever. I was going to give the card 4 stars because of the loud fans, but this card seems perfectly willing to run the fans quietly and back off the GPU overclock by a bit to stay just within the 80C thermal limit if that's what you prefer.

Overall Review: There was a lot of controversy regarding the cooler, power delivery design and how this card runs louder and hotter than the competition. Since I ordered on release date, I didn't know about these potential issues. I probably would have gone with a different brand such as Asus or MSI, but I have to say, so far, the only annoying issue is the slight coil whine when I run FAH. Other than that, this card is pretty solid.

Pros: This is a follow-up from a review I wrote when I first got the card. The coil whine issue is fixable with a little self-education. During gaming cutscenes and menus, the FPS can reach up to a crazy amount...I'm talking thousands of frames per second. This is what's causing the coil whine. The fix is to use something like nVidia Inspector, and set a limit on your FPS that covers all segments, which Vsync does not do. Ever since I used nVidia Inspector, I've had no issues with coil whine. Out of the box, this came at 1404 Mhz. Every game runs flawlessly, and fan volumes are just fine.

Pros: Low power consumption with 2 6-pin connectors, benched on Heaven well without going over 46 Celsius. Not too big, easy fit in most cases. 2 in SLI the budget way to run Anything at high settings.

Cons: One star off for fan noise, quiet at idle but really cranks up when running, not a problem if u use loud surround or headphones, Ive heard worse.

Overall Review: Beat my GTX580 handily, no worries about getting a new power supply with this, grab 2 if you can afford it, you don't need the performance boost of the 980's unless you want bragging rights lol

Pros: This is a great card with exceptional value and performance. I immediately fired up The Witcher 2 on max settings, including ubersampling, and the GTX 970 handled it with ease. Same story for Grid Autosport, Crysis 3, and anything else. I look forward to the next few years with this baby!

Cons: I had frequent BSODs upon first installing the card. It took a bit of debugging and a call to EVGA tech support to get things working properly. The issue was that my motherboard BIOS needed to be updated. Since then it's had no issues.

Pros: Coil whine is caused by not using a frame limiter, main menu's of games can tend to have up to 1500fps and beyond. Older games when ran may have a really high frame output rate. If your monitor is 60hz, use a frame rate limiter set it to 60fps, and avoid vsync (creates mouse input lag). 144hz gaming monitor, set limiter to 144hz. A free program is EVGA Precision X, and it has a frame rate limiter that you can adjust. Coil whine exists on any card when an excessive frame rate gets created.

Cons: No cons. Half the temperature on GPU when idle in my case compared to a GTX 570. More performance than GTX 570 2.5GB SLI, draws much less wattage, produces less heat. 100% pleased.