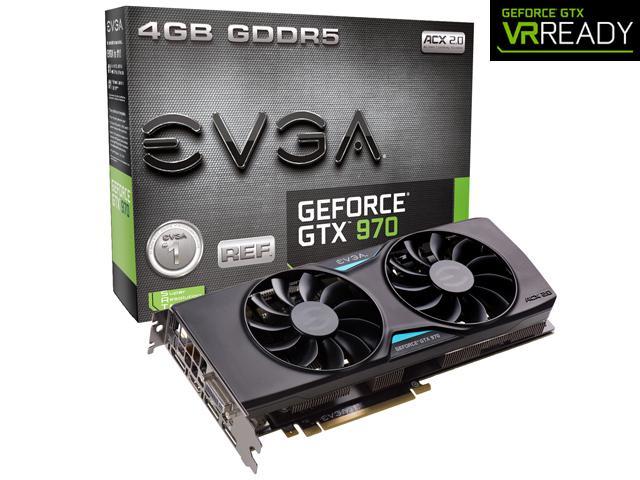 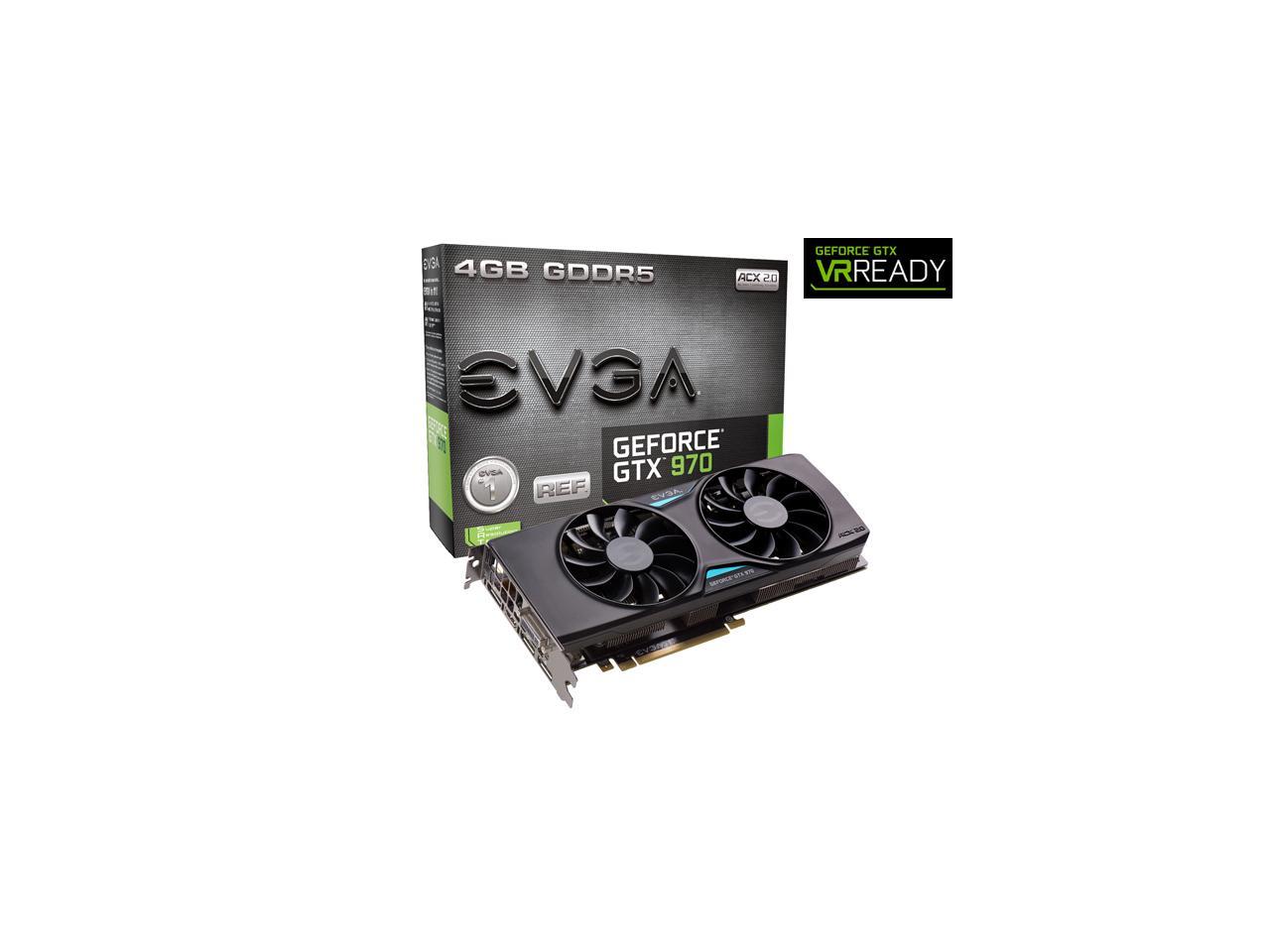 The EVGA GeForce GTX 970 04G-P4-3973-KR Video Card is the new weapon of choice for gamers. Based on the next-gen NVIDIA Maxwell architecture, it is built around 1664 CUDA cores with 4 GB of high speed GDDR5 memory, and comes with support for Microsoft DirectX 12, giving you higher texture qualities and better 4K performance. This enhanced model also offers six power phases for robust overclocking support, and two separate BIOS's that you can switch with the flick of a switch. This innovative feature can deliver 4K fidelity to 1080P displays for exceptional detail and image quality.

Dynamically maximizes clock speeds based on workload and allows enthusiast-class controls such as temperature target and fan controls, extra over-voltage headroom, and optimizations for water-cooling solutions. This allows gamers to push performance to new levels.

With a single card you can expand your PC games across three displays in full stereoscopic 3D for the ultimate "inside the game" experience. Add in a fourth accessory display to get access to your email, web, or other applications while you game.

MFAA delivers a 30% performance boost while maintaining smooth, high-quality edges by alternativing sample calculations across each frame and each pixel.

Dynamically enable vertical sync based on your current frame rates for the smoothest gaming experience.

This card is designed for the PCI Express 3.0 bus architecture, offering the highest data transfer speeds for the most bandwidth-hungry games and 3D applications. It also maintains backwards compatibility with existing PCI Express motherboards for the broadest support. Complete with HDMI 2.0, DisplayPort 1.2 and Dual-link DVI ports, it supports up to four concurrent monitors.

Pros: Runs everything I've thrown at it on ultra settings no problem, from GTA V to modded Fallout 4 to Assassins Creed Syndicate. Had it running on an amd fx-6100 overclocked to 4.5 ghz and the cpu would bottleneck before the card reached it's full potential. Now running it with an intel i7 5820k and it's even more amazing. Overclocks well, though I don't run it overclocked other than benchmarking (no need to).

Cons: Runs warmer than I'd like on the default fan settings. Thankfully with EVGA precision you can set your own fan profiles. Fans can be noisy above about 2500 rpm but they do work well.

Overall Review: I've been happy with every EVGA product I've purchased and this card is no different. Running 3 monitors on windows 10. If I run it with 2 monitors then plug the third one back in sometimes I have to unplug one of the monitors and plug it back in to get it to recognize all 3 again. Not really a con since most people don't add and remove monitors very often and it's a simple fix.

Pros: Upgraded from a GTX 670, and what a difference! Much smoother running two HD screens! Playing games in Borderless-windowed mode on one screen while surfing, skyping on the other just got a lot nicer and a lot smoother!

Overall Review: The fans don't even turn on if you're just sitting at the desktop, or surfing the web. When they do, they're not very loud, even running 3DMark on it didn't seem to excite it much, and even though it did turn the fans on, and spin them up pretty good, they weren't loud at all!

Pros: Works like any other 970, nice looks with dust plugs for every port. Great gaming performance and runs cool. Love this thing. Price was a bargain at 289.99!!

Cons: None, except for the slight coil whine, closed up in my case is no noise problem!

Overall Review: Got this to replace my GTX 760 in my ITX build, works great, fits perfectly and runs cool. Would definitely

Pros: - Easy to install (Plug and Play) - Kills every game I own even GTA V and Fallout 4 - Super Quiet - Came with a ton of free stuff

Cons: - Honestly none so far

Overall Review: If you are in need of a good GPU for a lower price this thing rocks. It can run almost any game in Ultra (as of 2016) and it looks sweet! Also if you are into video editing this thing runs anything that uses OpenGL like a dream.

Pros: I've only benched a few games with this card, but I was able to play GTA V, Battlefront and Battlefield 4 on the highest settings available. Works great for any kind of other visual work you're doing.

Cons: I don't have any complaints other than it is very large. Make sure to check the dimensions. I had about 1/2 of an inch of space in my mATX case between the drive bay and the GPU when I put it in. I had bought a new case as I thought it wasn't really conducive to airflow.

Overall Review: I would like to note to others that the GPU is in passive mode (meaning the fans don't spin) until it hits 65c. I've read on a few other sites that people were trashing the cards thinking the fans weren't working. Don't make that mistake. I also don't think the fans are particularly noisier than other cards. I'm coming from an HD 7850 which made just about as much noise as this card.

Pros: Runs cool under intense gaming and graphic uses! Keeps clean no dust even after month or more with out cleaning Runs any game as long as your set up matches the beast strength of the 970 :)

Cons: don't have any other than the fans being unbelievably loud when above 50, but since that's never happened with my afterburner settings how can I complain?

Pros: in gta v i got 20 fps on the lowest settings with my old 740 now i play on the highest settings and get 120 ish. didn't have any problems with it.