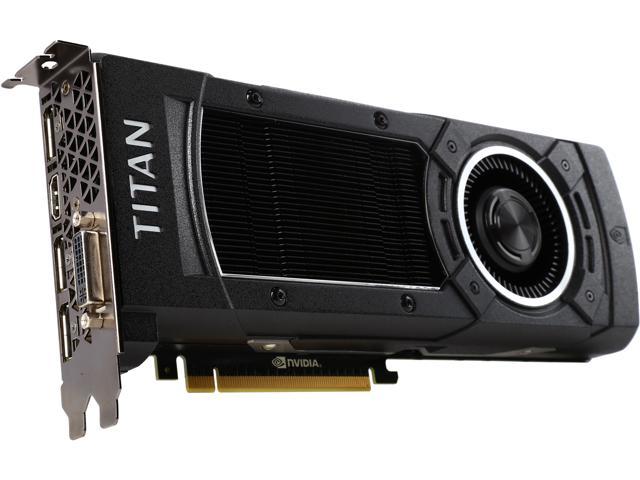 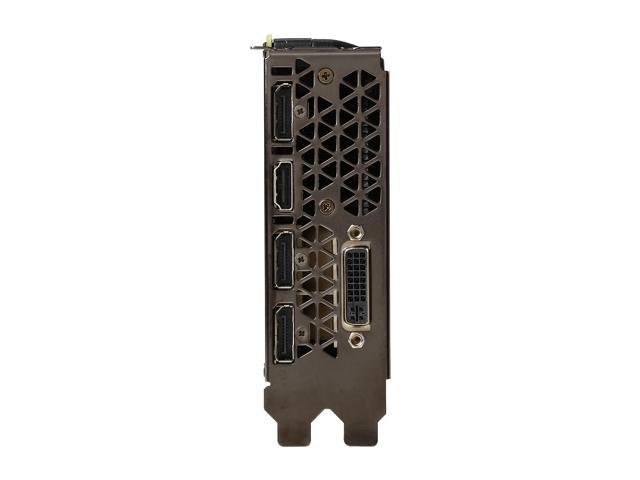 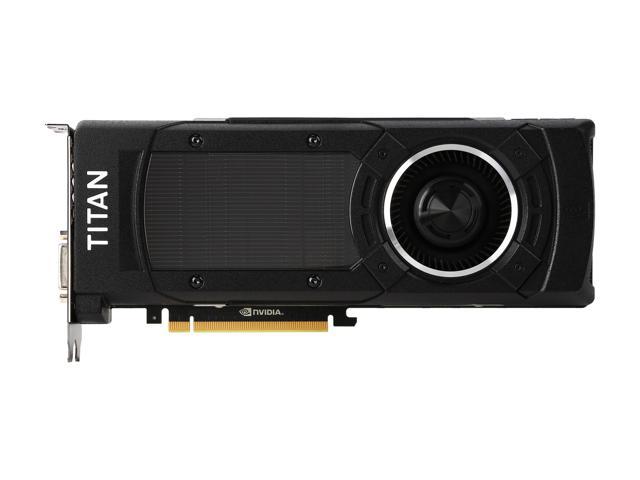 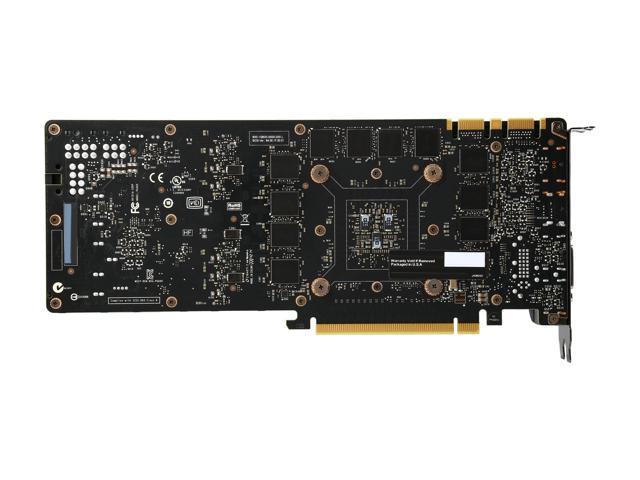 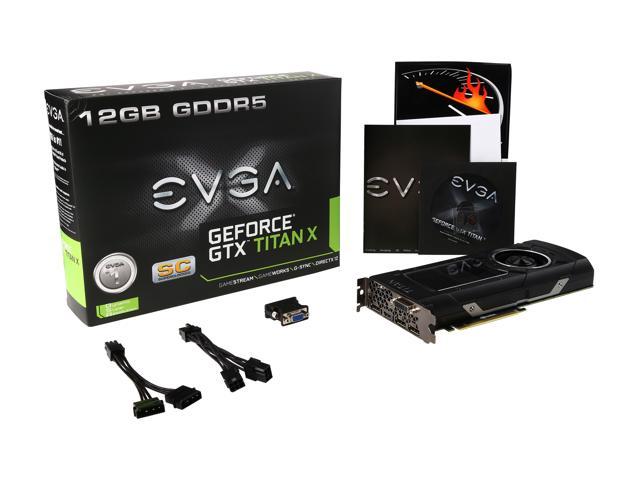 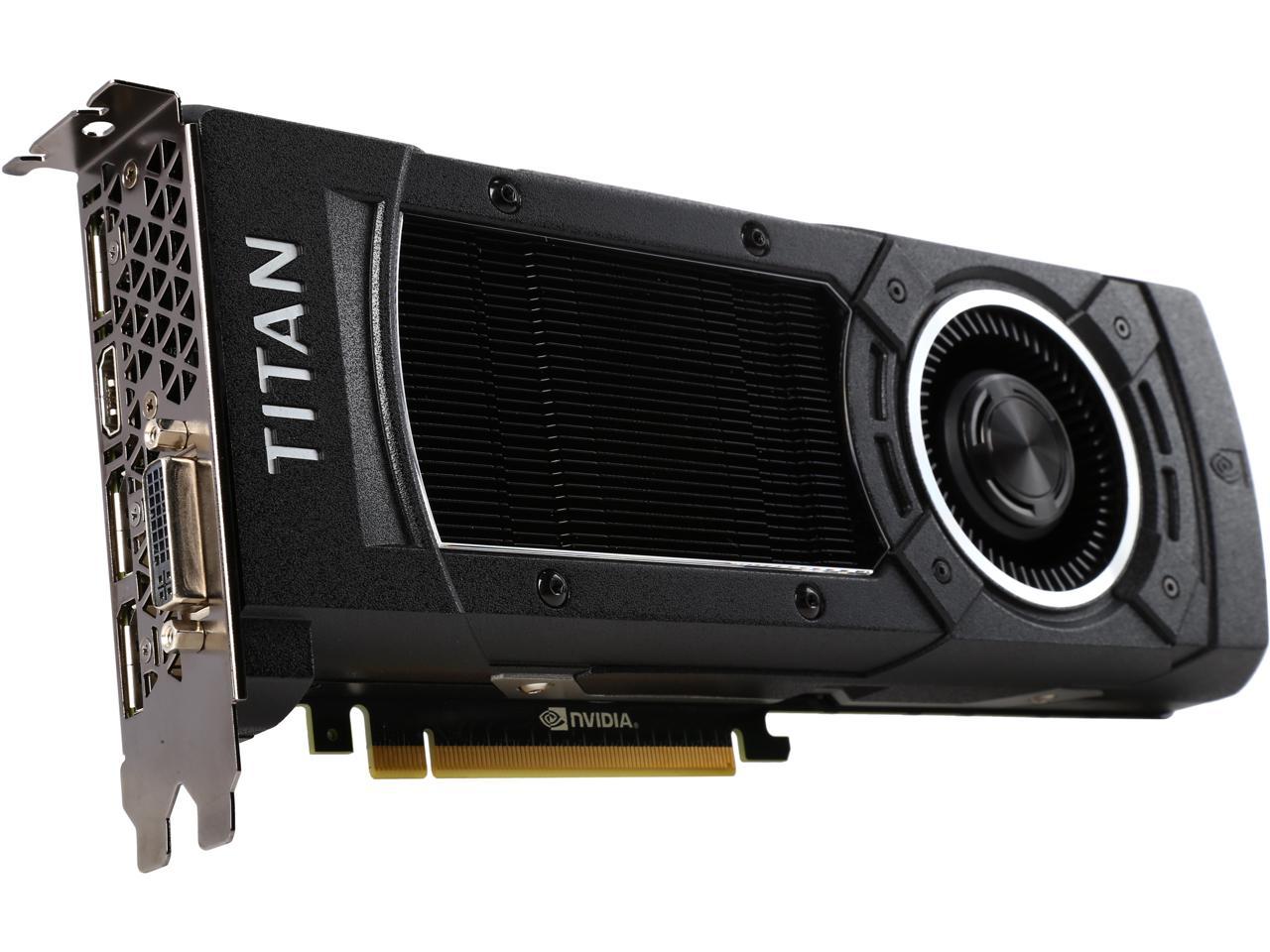 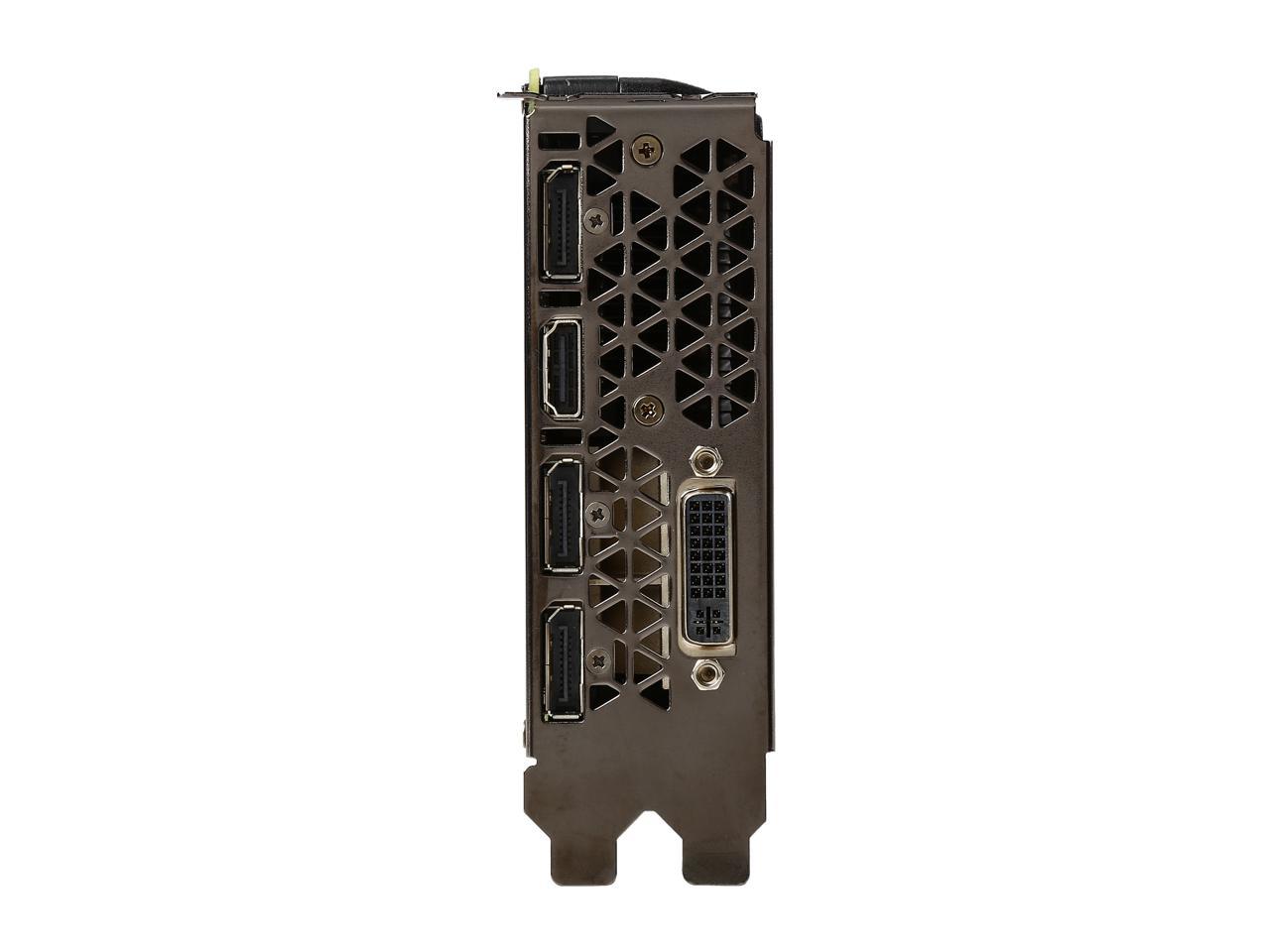 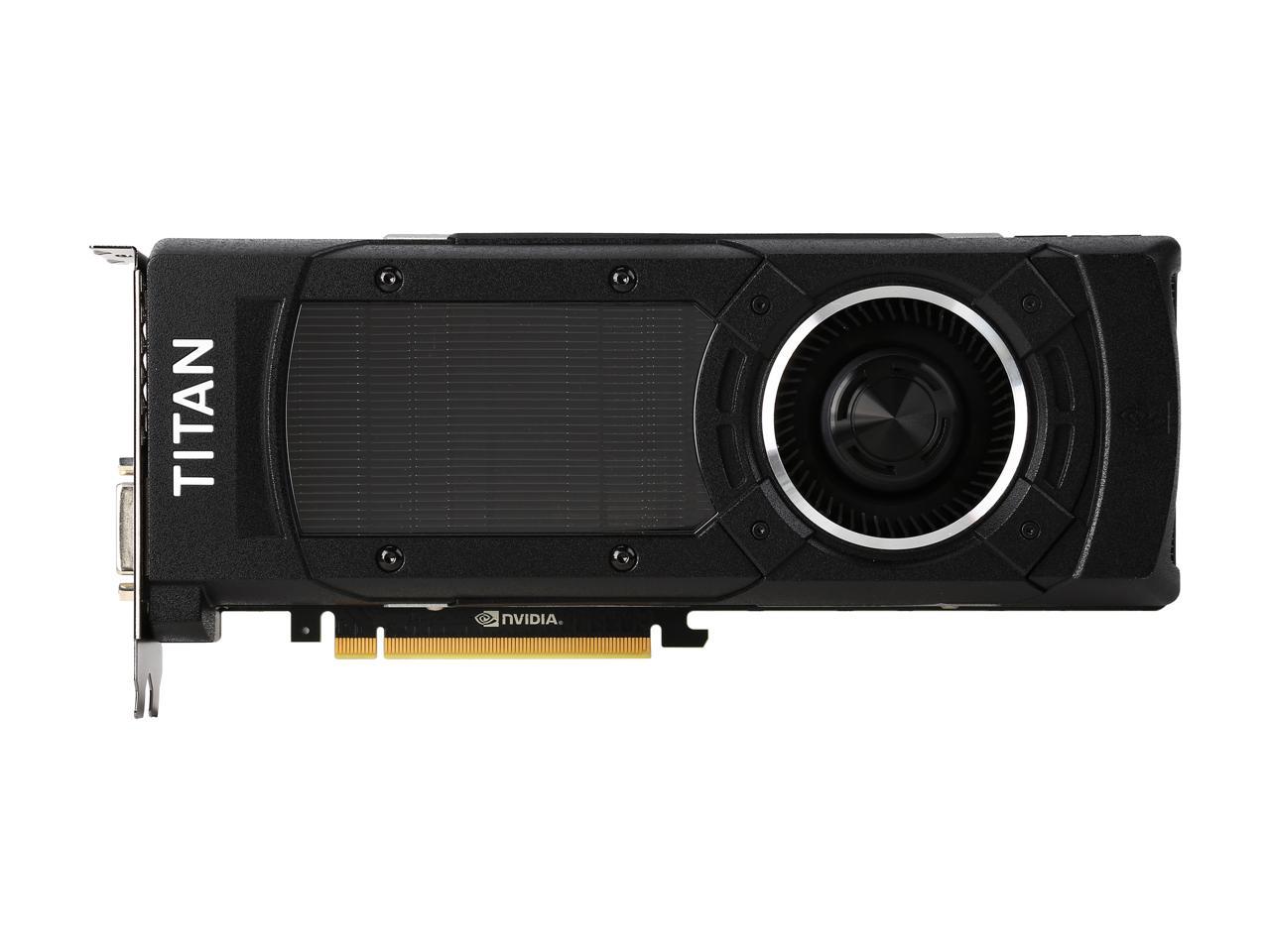 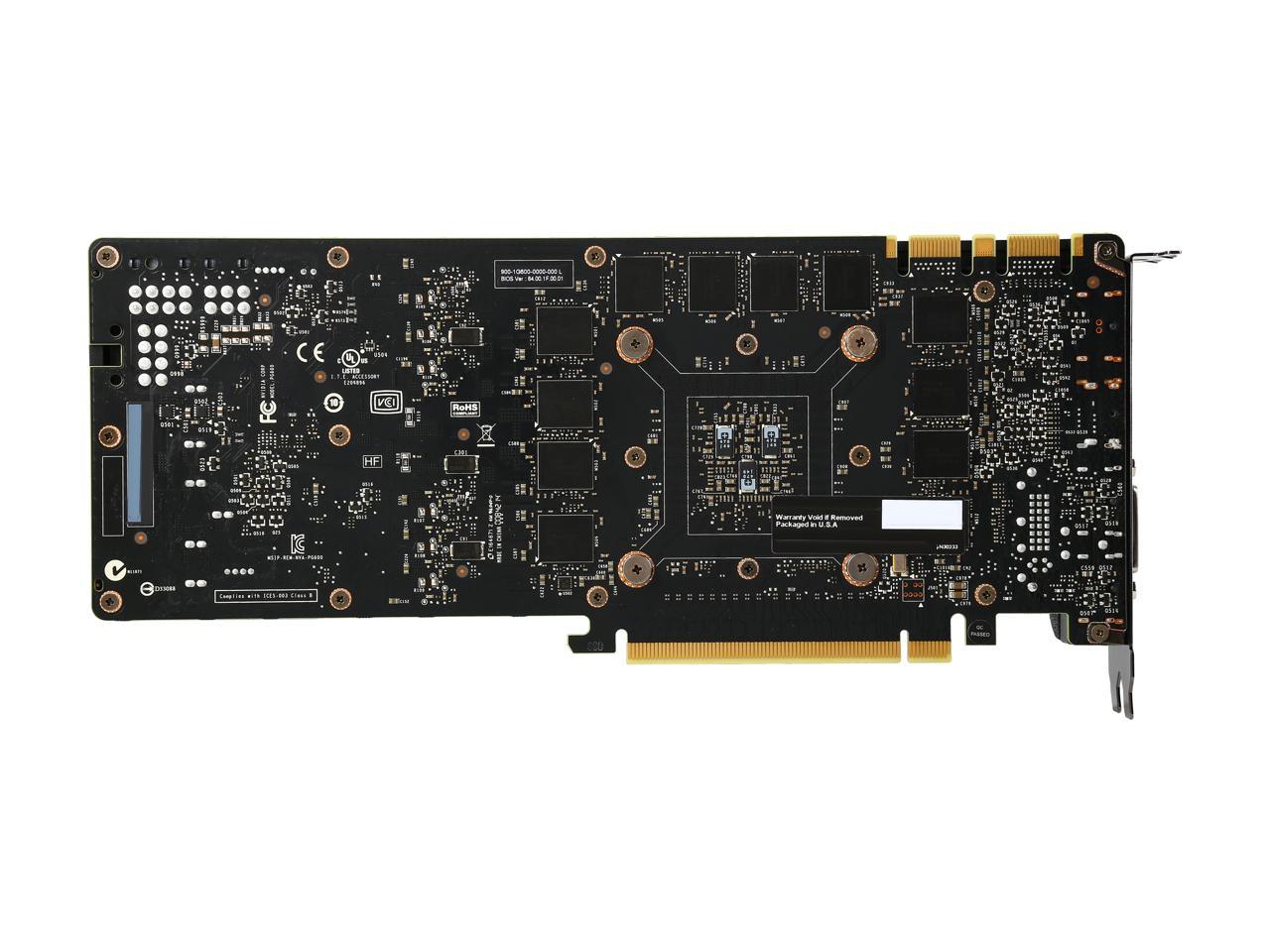 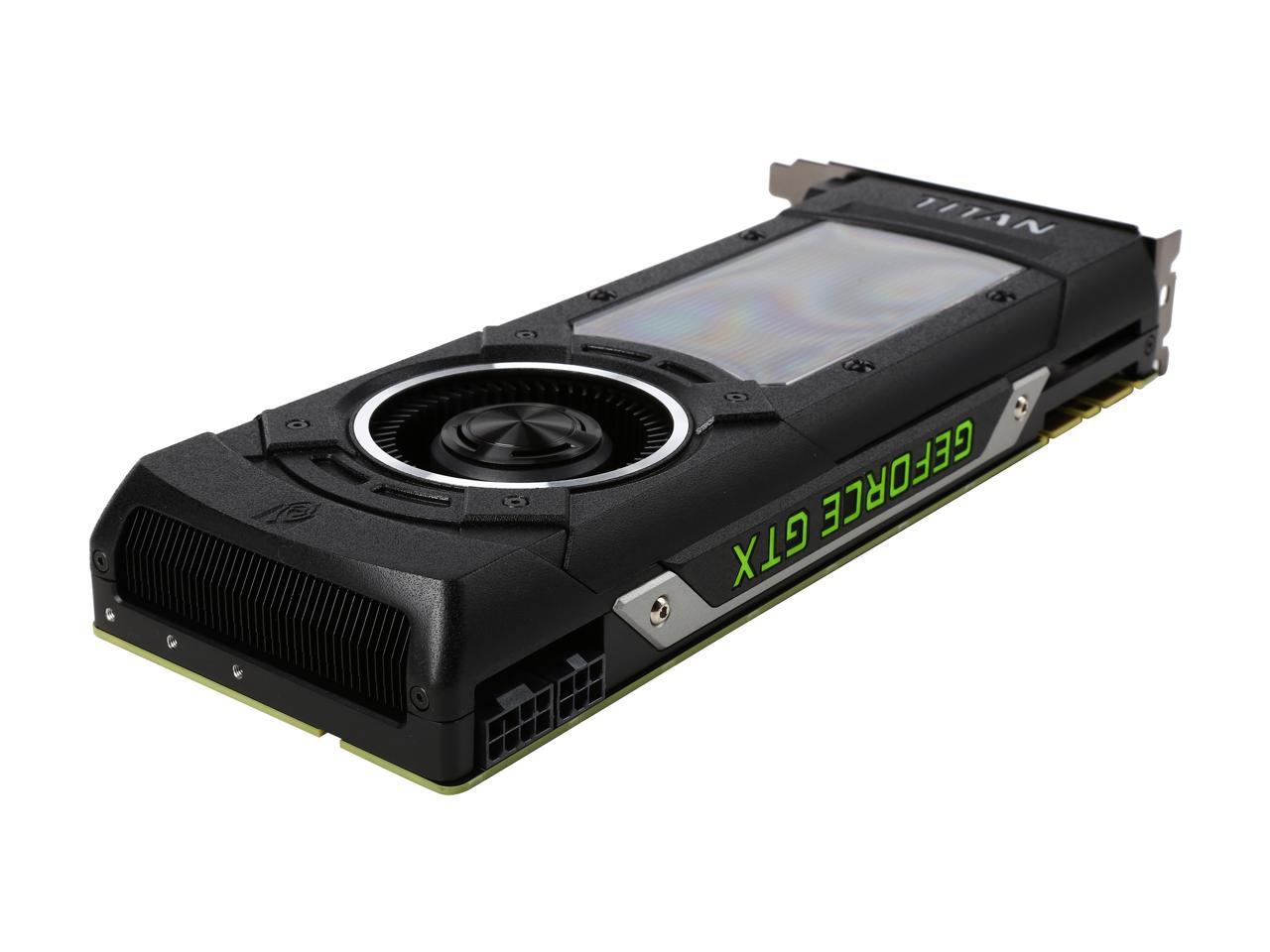 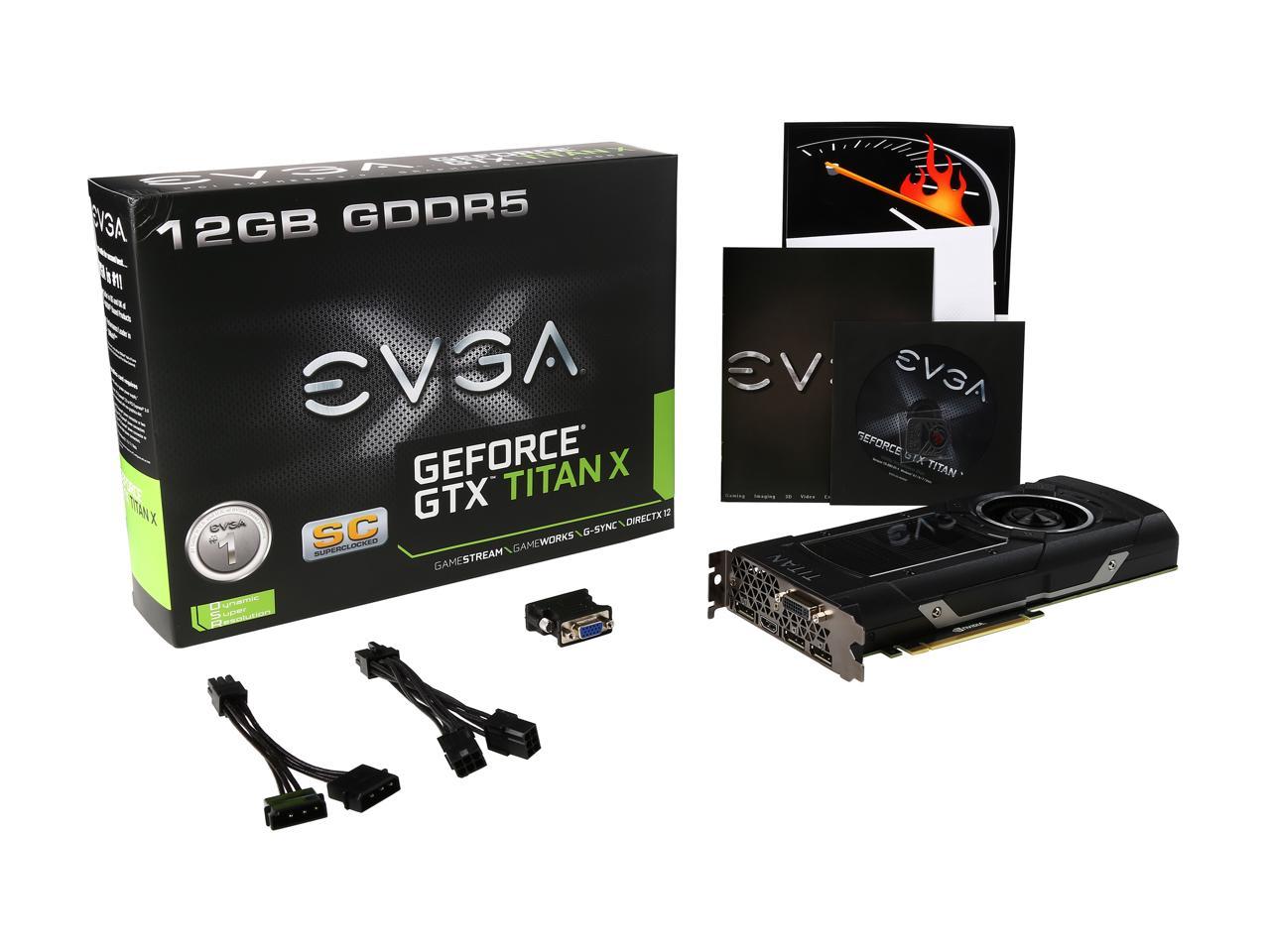 The EVGA GeForce GTX TITAN X combines the technologies and performance of the new NVIDIA Maxwell architecture in the fastest and most advanced graphics card on the planet.

This incredible GPU delivers unrivaled graphics, acoustic, thermal and power-efficient performance. The most demanding enthusiast can now experience extreme resolutions up to 4K-and beyond.

Enjoy hyper-realistic, real-time lighting with advanced NVIDIA VXGI, as well as NVIDIA G-SYNC display technology for smooth, tear-free gaming. Plus, you get DSR technology that delivers a brilliant 4K experience, even on a 1080p display. The Ultimate GPU
An unbelievable 3,072 CUDA Cores give you performance in thelatest games at extreme resolutions. Unrivaled Design
TITAN X is engineered with the highest-grade components and meticulous craftsmanship, offering a massive leap in performance while maintaining unbelievable acoustic and thermal efficiency. 12GB of GDDR5 Memory
12GB of GDD5 memory gives you the ultimate performance for 4K gaming..and beyond. Extreme Gaming
TITAN X is the only single GPU that can take on 4K gaming at high settings with ease. EVGA PrecisionX – Redesigned to harness the power of GPU Boost 2.0, EVGA PrecisionX sets another baseline for what overclocking software should be. Learn more and download it below! EVGA OC Scanner X – Featuring a brand new look and layout, this popular application has been updated to show all of the GeForce GTX TITAN X vitals. Learn more and download it here.

Pros: I came into picking up this card with hopeful but realistic expectations and so far, I have been quite impressed. I've not seen an Earth-shattering difference, coming from an original Titan SC to this X SC, but the differences are still quite substantial and I feel, worthwhile. On benchmarks and games where on the Titan I could be hovering around 60 FPS or a tad higher, this card pushes 90-120+. I'm still putting the card through my own suite of benchmarking and gaming tests but on average I'm finding it to be 20-50% faster than the full Kepler chip in the original Titan, which is pretty awesome. Not sure if that would equate it to the same figures above and beyond a 980 but I'm trying to compare apples to apples. My card has been fantastic. Arrived from Newegg and EVGA in perfect condition. No issues installing. Grabbed the GTA V 350 driver and away it went. Immediately set up a manual fan profile to 65% and that is more than sufficient for lighter games such as WoW or FFXIV. Games more akin to BF3 or 4, Rift, GW2, or those that push the GPU a little harder can easily be handled by the stock cooler at about 65-70% fan, which, while not quiet, is not really any louder than the original Titan's fan. For benchmarking, 85% fan works well, and on a rare case, 90% is fine. No need to really push 100% as at that point it's moderately loud. But again, it's just the woosh of air - not coil whine or whirring or anything - just the brush of moving air. The highest I can test this card on my monitor is at 1200p, even though I do plan to move to 4K in the future. I've certainly had some high enough frame rates on games and tasks to where yes, I can agree with review assessments that this is the first 4K-capable single GPU card where you can get sufficient frame rates out of it for gaming. It may not happen in every game, but it seems like the power is there. 12 GB of RAM just because it's the X! You probably won't use all of it any time soon though. Have not pushed the card beyond stock at all in testing but again, have heard good things. For now it's very fast and fantastic and for the most part obliterates any scores or such I could achieve on an original Titan. If you want arguably the best single GPU out at the moment, this is it. Sure SLI models that are a notch lower can equal or beat it but if you don't want to deal with dual GPUs, this is the limit for the moment. For Folders, should score 2-3x as many PPD than the original Titan. For 3DMark, you'll see ~50% more points on GPU tests compared to the original Titan. Keep in mind this card does not have any specialty compute built in. FP is back to 1/32 so if you need a cheap scientific card, you're probably better served by the other Nvidia cards or an original Titan. Roughly the same size, power use, etc., as the original Titan while being more powerful. Can't go wrong with that. Great card!

Cons: Price isn't so much a "con" as just par for the course at this level. It's not the most efficient Dollar to price card out there but at least as far as I'm aware, is a better value than the original Titan.

Overall Review: I've put the majority of my review in the good section, and with good reason! The fit and finish on this card is superb, with a great powder coated black metal body, same clear window, green GTX logo, and same fan style that made the original Titan impressive - stepped up a notch. A solidly built beast of a GPU. Only one 6 pin and one 8 pin needed for supplemental power. If you want the best, now, get one and enjoy. Sure, eventually there'll be something better down the road - that's just how tech goes, but for now this is the king and I'd imagine anyone coming from Kepler architecture or prior to Maxwell period, will be impressed. Hopefully once DX12 brings greater fidelity to game detail or we see engines continue to advance, that cards like this can be more thoroughly pushed. While some would argue this is a waste for me even at 1200p, I do a lot of other graphics / photo / video work where I can see improvement as well. It's all about gauging needs, and for me at the moment and for the future, I think the X will certainly fill it.

Pros: Ever since I started building computers in the mid 90s I always had to build budget gaming rigs but I would look at the top tier hardware and dream about building something amazing. 20 years later I finally got the chance and went for it, I bought this card and love it so far. I'm a poor guy and 8 grew up in a poor household. We never had a computer, I had to wait till I was an adult and had to get one with my own money. The card is not as big as I thought it was going to be but it's the heaviest card I'd ever held in my hands. it just looks and feels like it was built with high quality as it's focus. I have only owned it for a few days but it rips any game I play apart.

Cons: It's over a thousand dollars. You are getting something amazing for the money but still it's a thousand bucks. Would have been nice to get a EVGA Titan sticker to put in my case as well. Most cards come with one so I was a little surprised this expensive monster of a gpu didn't have a sticker.

Overall Review: Sorry for the not so technical review I'm usually not the type to write how I feel about things I've purchased online but I was so happy with this video card I figured I'd have to say something. There are great gpu options for way less money so for most people this is not the best option. Just wanted to experience the absolute best for one time in my life and so far it's been great. I will never be able to do this again most likely so I'm going to enjoy it while it's fresh. My PC: Mobo- Msi Z170A Gaming M7 Cpu- i7-6700k LGA 1151 4.0 Ghz Cpu cooling- Cooler Master Hyper 212 Evo Ram- 32gb Vengeance DDR4 3000Mhz Memory- 1x 500gb m.2, 2x Seagate 2 tb 7200 Rpm Video- 1x EVGA Titan X SC Case- Corsair Carbide Air 540

Pros: Absolutely Amazing. Couldn't be more impressed or more happy with this card. I switched over from a 7970 3GB Running Eyefinity from one card. I've always been much more fond of Nvidia, my last card was the first AMD I owned and I wanted to switch back to Nvidia and upgrade to something I could still run a 5760x1080 resolution on from one card. I originally was looking at SLI'ing two 980's but went with the Titan X instead so I could stick with one card and I have been extremely impressed thus far. And hats off to EVGA for not only making a solid card, but making me feel like it was worth the money alone just from the way the dang thing was packaged, It felt epic just getting the thing out of the box. (specs and benchmarks in other thoughts)

Cons: Not a single one.

Pros: +12GB VRAM +Overclocks like a champ +Best single GPU out there (don't compare this to dual GPU cards) +Great warranty and service from EVGA +Does not depend on SLI profiles +Easily handles 4K gaming on my Acer 4K G-Sync monitor +Looks sexy in black

Cons: -Doesn't come with a backplate.

Pros: 1. Fast 2. Efficient 3. Powerful 4. Great design (asthetics) 5. Run your games maxed out with all the smoothness in the world

Cons: 1. Can be loud (good fan profile required) 2. With all the confusion around the 24gb ram required it had me worried. BUT no worries, i can assign 6gbvram +/- with only 16gb ram so it doesn't really matters. All you have to do is let windows manage your paging file automaticly.

Overall Review: It is a very nice product and i'm having a HARD time trying to max out vram since it FREAKIN 12GB. I would've waited for the 980ti BUT with only 6gb/8gb rumored specs, i thought the titan x was more suited for my setup 2k/4k resolutions. I coupled it with a Asus RoG Swift and it's smooth as butter with gsync.. :D

Pros: Its the fastest GPU out there. I use it mainly for gaming. I can play every game in max, 1440p res and I get 60+ FPS. No need to overclock it anymore than it is since nothing really challenges this GPU yet. Boosts at 1271mhz right off the box. Love the all black design.

Cons: It would've been nice to see a change in the cooler since it gets a little noisy when it goes past 50%

Pros: Nothing to say that others haven't. I'm enjoying the huge amount of memory that my 780 Ti didn't have.

Cons: It didn't come with The Witcher 3/Arkham Knight bundle that the lesser 900 series does. >:(

Pros: Tried two 980 in SLI, even the K|ngp|n edition graphics cards were not enough to push a 4K monitor. But two of the TX in SLI were more than sufficient, giving me more than 60 fps in AAA title games like Dying Light. After testing, I installed water blocks and now the GPU boosts to 1278MHz on default settings. I can also overclock them close to 1500MHz with no changes to voltage. The ASIC quality score was 64.4 and 66.6 respectively, which I do not rely on for overclocking potential. I believe I just have good cards to play with. In addition, the 12GB of VRAM is a nice buffer for some of the latest games at higher resolutions or surround.

Cons: Unlike the original Titan, this card is ideal for gaming and only gaming. If AMD had better driver support, I would be all over their products. But since NVIDIA is in their A game, I will continue to buy EVGA, etc.

Overall Review: I received this item in less than three business days after ordering which shipped from their CA warehouse. Newegg rocks!