OUT OF STOCK
Sold by: Newegg
Shipped by Newegg
This item is currently out of stock and it may or may not be restocked.
Out of Stock
Add To Wish ListFound on 9 wish lists 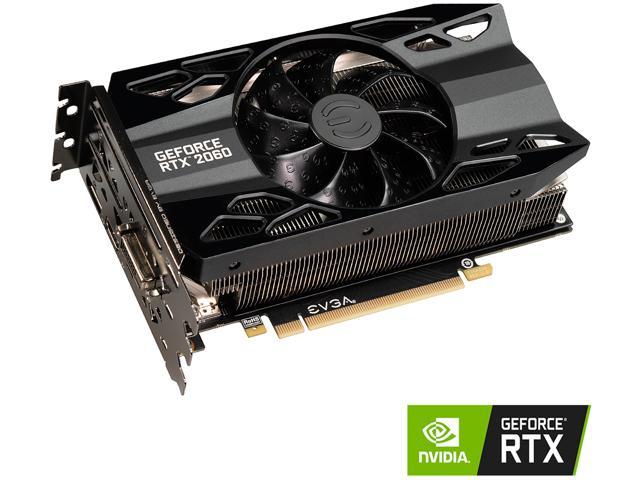 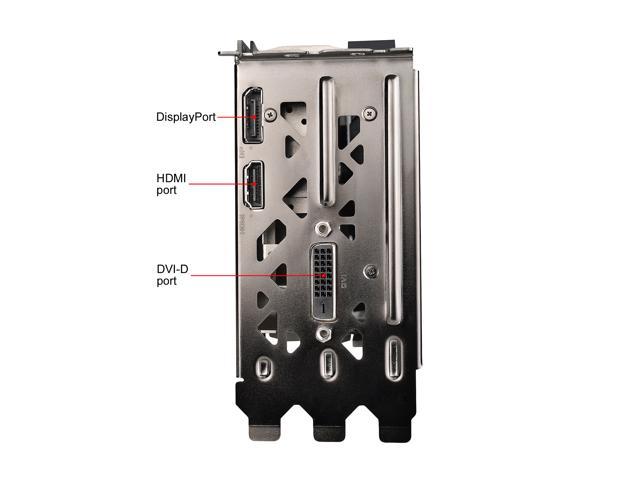 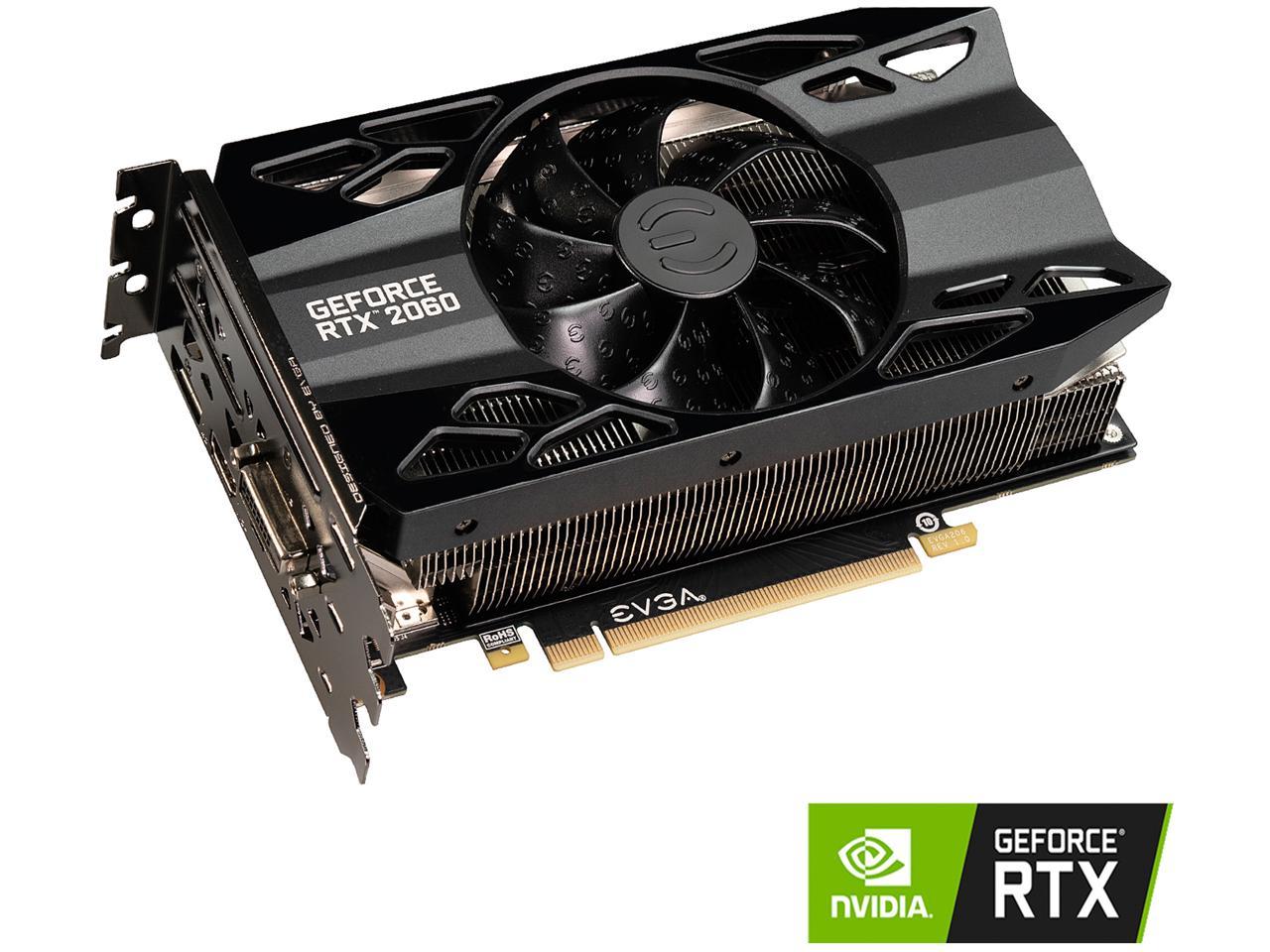 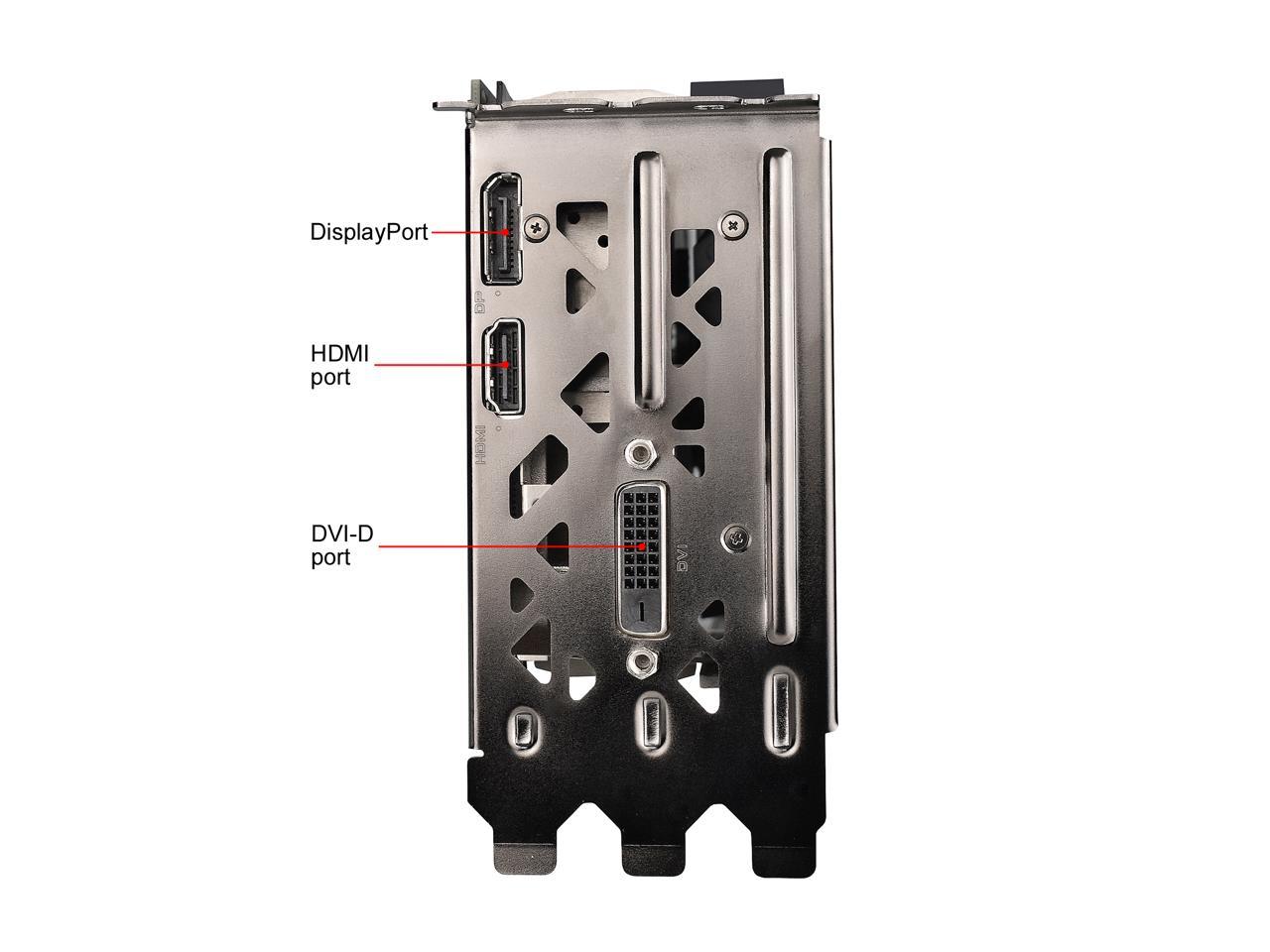 Completely Redesigned from the Ground Up: The EVGA GeForce® RTX™ 2060 Gaming Cards are powered by the all-new NVIDIA Turing architecture to give you incredible new levels of gaming realism, speed, power efficiency and immersion.

GeForce® RTX™ graphics cards are powered by the Turing GPU architecture and the all-new RTX platform. This gives you higher performance compared to previous-generation graphics cards while bringing the power of real-time ray tracing and AI to games.

The first HDB fan on an NVIDIA graphics card that optimizes airflow, increases cooling performance and reduces fan noise by 15%, compared to more commonly-used sleeve-bearing fans on graphics cards. The special upraised 'E' pattern on the enlarged fan allows for further reduction in noise level by 4%.

With a brand-new layout, completely new codebase, new features and more, the new EVGA Precision X1 software is faster, easier and better than ever.
www.evga.com/px1

EVGA GeForce® RTX™ 2060 graphics cards offer you more ways to keep your system cool than ever before. Offering a variety of fan choices, heatsink sizes and cooling technologies. You can select the card that fits your system perfectly. Pros: Works great. No screen taring. Super smooth. 60 fps consistently on max settings Usage doesn't go above 60% under load in my system Installation was easy(surprising for me) Nice, thick heat sink makes this thing look like a brick!

Cons: None so far. The card takes up 3 slots in the back, instead of your typical two. No big deal for me.

Overall Review: I had an Asus R9 270 that was struggling with new games. When I decided to upgrade, this entry was just added to the new 20 series. It fit the budget and offered a lot for my money. Card works great in my 5 year old AMD build. I run the FX 8320, liquid cooled, with 16 gb of ram. Some articles claim that the 2060 is a horrible pairing... I understand there will be limits to a degree, but that degree in my opinion is pretty high. I noticed the improvements IMMEDIATELY! I used DDU to remove the old drivers. Installation was a breeze. Fits well, looks good, runs good.

Pros: Extremely good performance overall. I have a 1440p monitor and a 50 inch 1080 tv and this thing eats up Anthem, Assassins Creed Origins, Shadow of the Tomb Raider and Metro Exodus on ultra/high settings. Beautiful performance hitting 90-100 fps on my monitor. If you turn down some of the more heavy settings a tiny bit you could definitely get well over 100 frames. Have to turn on Vsync on my tv to keep it at 60 frames because this thing blows past that mark at 1080p. This card benchmarks almost identical to a 1070ti and I would say it is spot on. Got a free game with it too making an even better deal.

Cons: Runs almost exactly 83 degrees no matter what I did for AAA titles. Installed a side case fan and the temps plummeted but it is still something to think about if you have a small micro or mini atx case without a side panel fan. (83 is still well within safe temps so not gonna knock an egg off for that.) Idles at 32 degrees C now and under load rarely goes over 70.

Overall Review: Pretty well documented but the ray tracing and dlss are kind of pointless right now. Still, nothing wrong with future proofing your tech in the pc gaming world.

Cons: No backplate or lights

Overall Review: This card performs very well and works silently. I can play the newest games at ultra settings. I got this to replace a GTX 1060 6 gb because my pc was bottleneck due to it. Now with my Ryzen 2700X and this gpu , no more bottleneck. It is not a big size but does takes 3 slots. It will fit most cases compared to many cards out here that have 2 or 3 fans and that are very long. EVGA is also a great brand and the card looks very solid. I would highly recommend it. The only small things i could put in the cons is that it does not have a backplate or fancy lights but it dont affect performance. This is a great card. Dont listen to the anonymous guy who has an outdated pc with old parts that has problems with it. For sure an old cpu will be bottleneck with this card and it can cause problems also with other old parts. My pc specs = Ryzen 2700x cpu Asus TUF B350 motherboard 16 gb ddr 4 Gskill ram M.2 ssd 256 gb drive sata 2 tb hard drive sata 1 gb hard drive 600 watts Thermaltake power supply Rosewill atx mid tower case Windows 10

Overall Review: The only con could be the height of the card, though for my build this was a non issue, and overall I am very pleased with the cards performance.

Pros: Great video card for the price. I tend to get the entry level card from a new series of cards and can play all games with great quality. This one did not disappoint upgrading from a 2GB ATI card.

Cons: Downsides is that it isn’t the next version up of the card. There are better cards out there but not worth the price increase for the cost.

Overall Review: Overall this is a great card. Great to get into the RTX 20xx series.

Cons: While overclocked to +60 core clock +700 on momory, the card began to run hot. Hitting 80c under a full load. So I replaced all the cheap fans in my cheap case with noctua pwm fans, then made the curve on the mobo and video card fans fairly aggressive, and saw a drop to 70-75c under 100% load. It is loud,(mainly the 5 case fans running at 2krpm)but I game with headphones on and noise isn't an issue for me.

Pros: Upgrade from a 1060 6g,almost double the fps in some games. Fan are very quiet even at full speed and do the job t very well to keep the card under 64 degree in game. 1850mhz out of the box. Easy overclock

Pros: Pros: Pretty much everything. Temp, noise (lack thereof), performance in games all are top notch and somewhere between 1070 Ti and 1080, but with ray tracing, although the only game I have that can use that is Battlefield 5.

Cons: Cons: There are only 2 cons I can think of. One is that they could have added one more HDMI, DP, or DVI connector for 4 total. Probably will not affect me unless I try VR someday. I use 2 monitors and so right now only the display port is free. Not sure that is enough for a VR headset. Second con is no back plate. A nice metal EVGA back plate would really have added to the looks of this card. I would be willing to buy one in the future should it ever become available.

Overall Review: It is pretty big (width wise), taking up 3 slots. It is extremely quiet. I do not hear it over my 5 120mm case fans, not even after 5 hours of gaming. Highest temp in HW Monitor was 79 C. Usually when I look it is high 60's, low 70's. This is the beefiest single fan gpu cooler I have ever seen! I have not over clocked, as for my setup at 1080p I see no need too. Battlefield 5 which came with the card looks and plays incredible! Just amazing graphics. All my games, from World of Warcraft to FarCry 5 I now play maxed out on Ultra, except for some texture settings which are on high. And not only did I get Battlefield 5, EVGA also has a promotion that gave me GRIP, a combat racing game. I am terrible at it, but was very nice of them to do it! Thanks EVGA. All in all an awesome card that I look forward to using for many years to come! Edit: I forgot to write my systems specs, as I am sure some of you may be interested. They are as follows: Case: Cooler Master Storm Scout Advanced 2 Ryzen 5 1600 with stock heat sink and fan Asrock X370 Gaming X, Bios 4.90 Adata XPG DDR4 2666 16gb (2 x 8) EVGA RTX 2060 XC Black Samsung 850 EVO 250gb boot drive WD Black 500gb and 1tb hard drives EVGA 750w G2 Power Supply Windows 10 Pro, 1809 Nvidia 419.67 Driver 1080p 60hz Resolution Nothing is overclocked. I am running Battlefield 5 with ray tracing on medium and textures on high and it is as smooth as can be (and looks amazing). All other settings are on ultra, although I run TAA on low. This is in single player. In multiplayer, I turn off ray tracing and have a mixture of high and ultra settings. Things still look awesome while I am laying dead on the ground enjoying the view, although I am improving a little now and sometimes I actually live! Update 3/28/19: The longer I have this video card the more impressive it is. On latest Nvidia drivers playing WoW, BFV, FC4,5, and other games with zero problems and fantastic graphics. Card stays cool in the 70's, and I guess my computer case with good air flow helps that. Can't hear a sound over my case fans, which have a pleasant sound anyway. You would not believe how good FarCry 4 and 5 look using this video card, everything ultra, at 1080p!