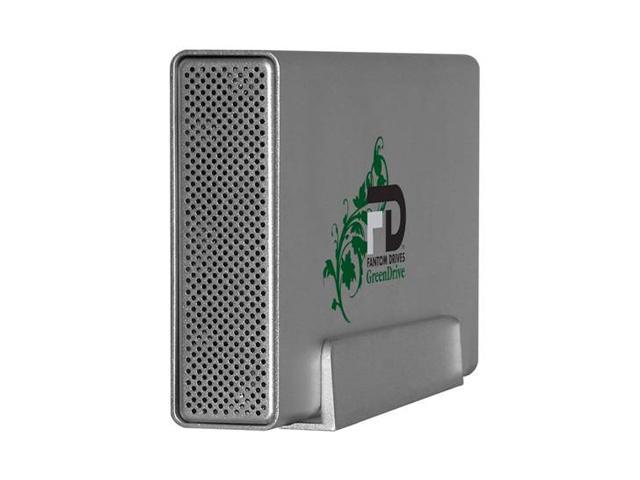 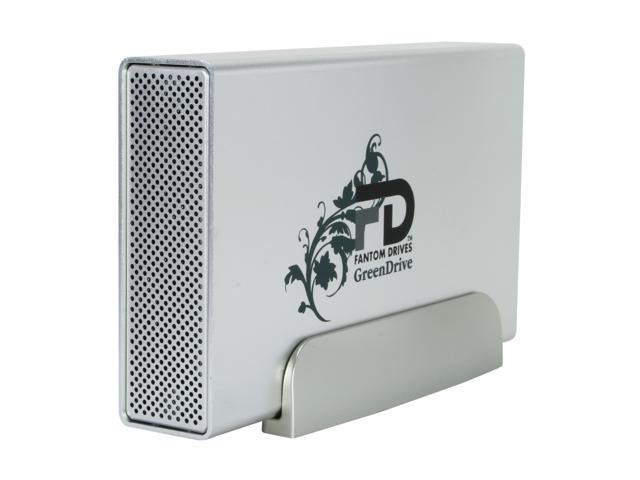 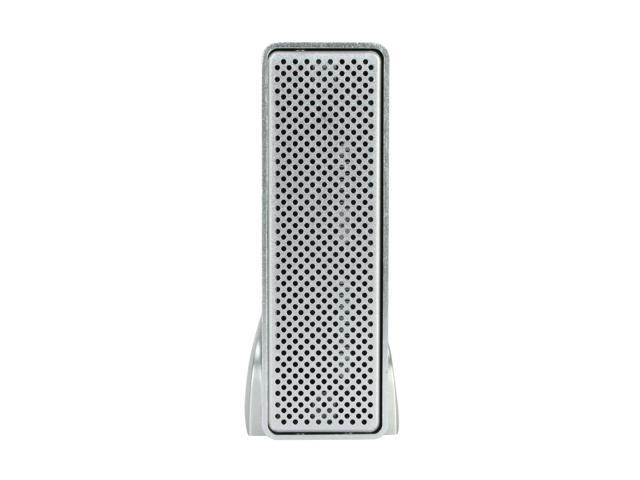 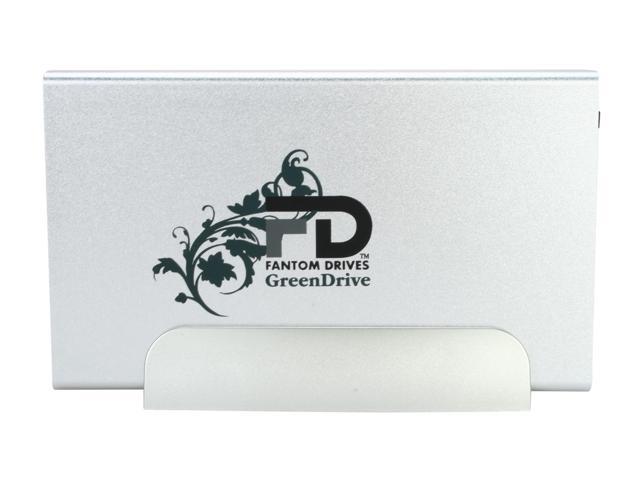 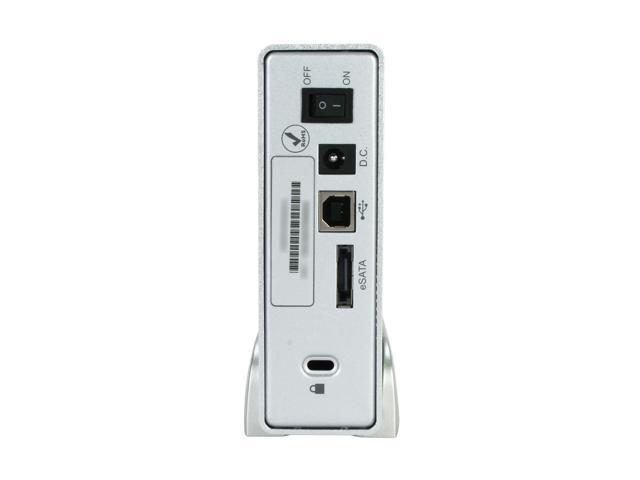 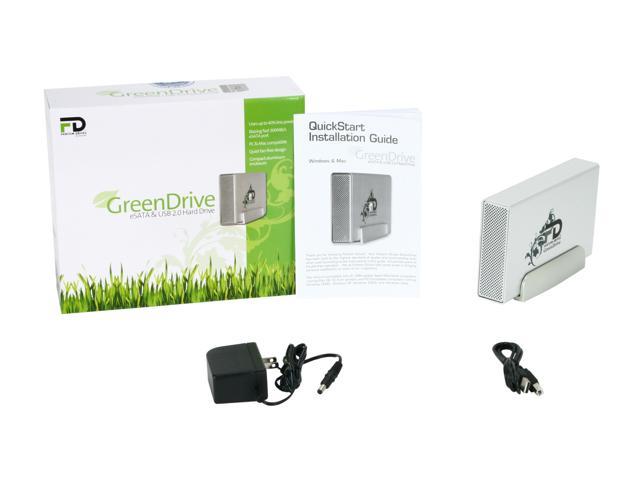 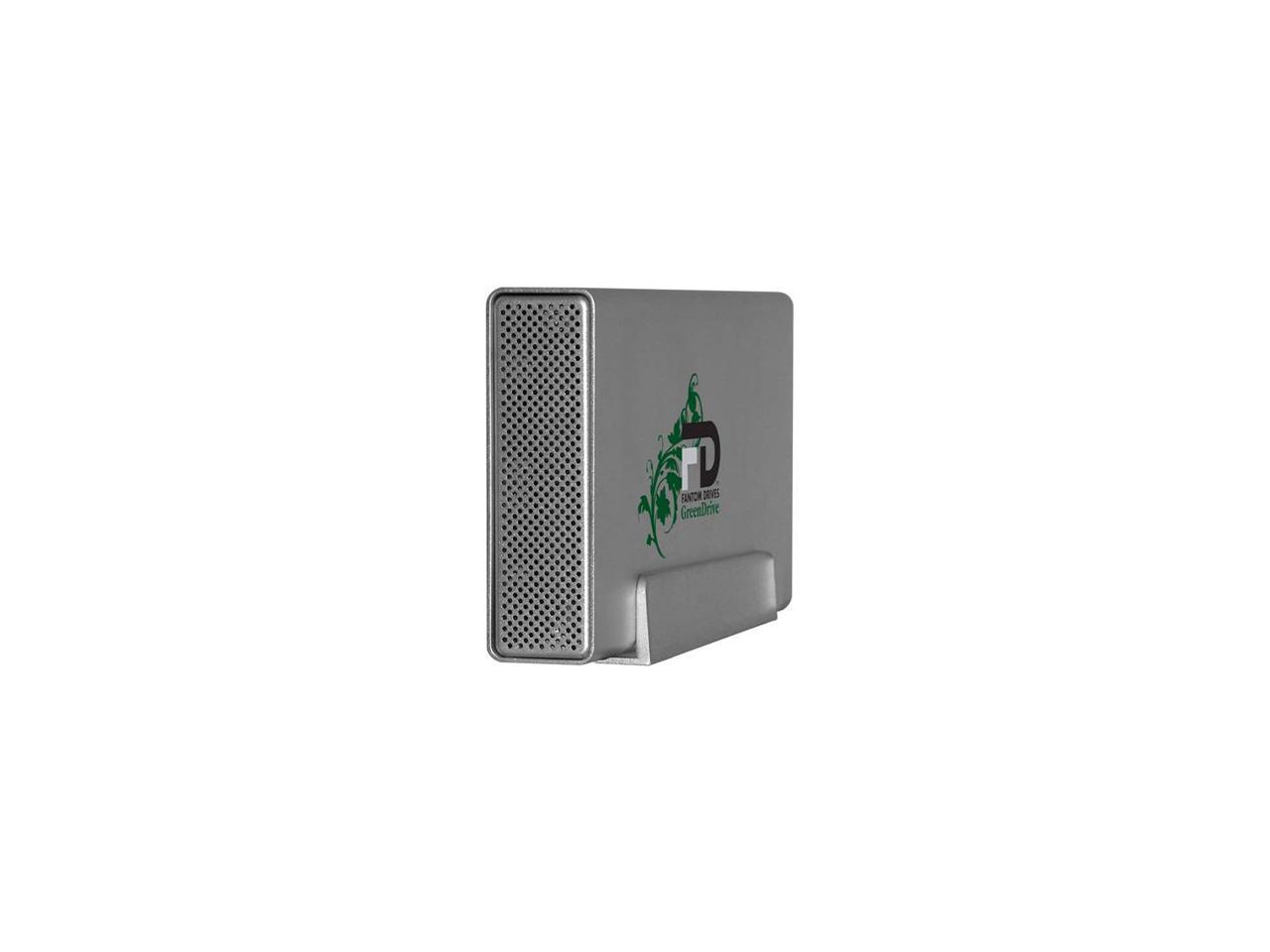 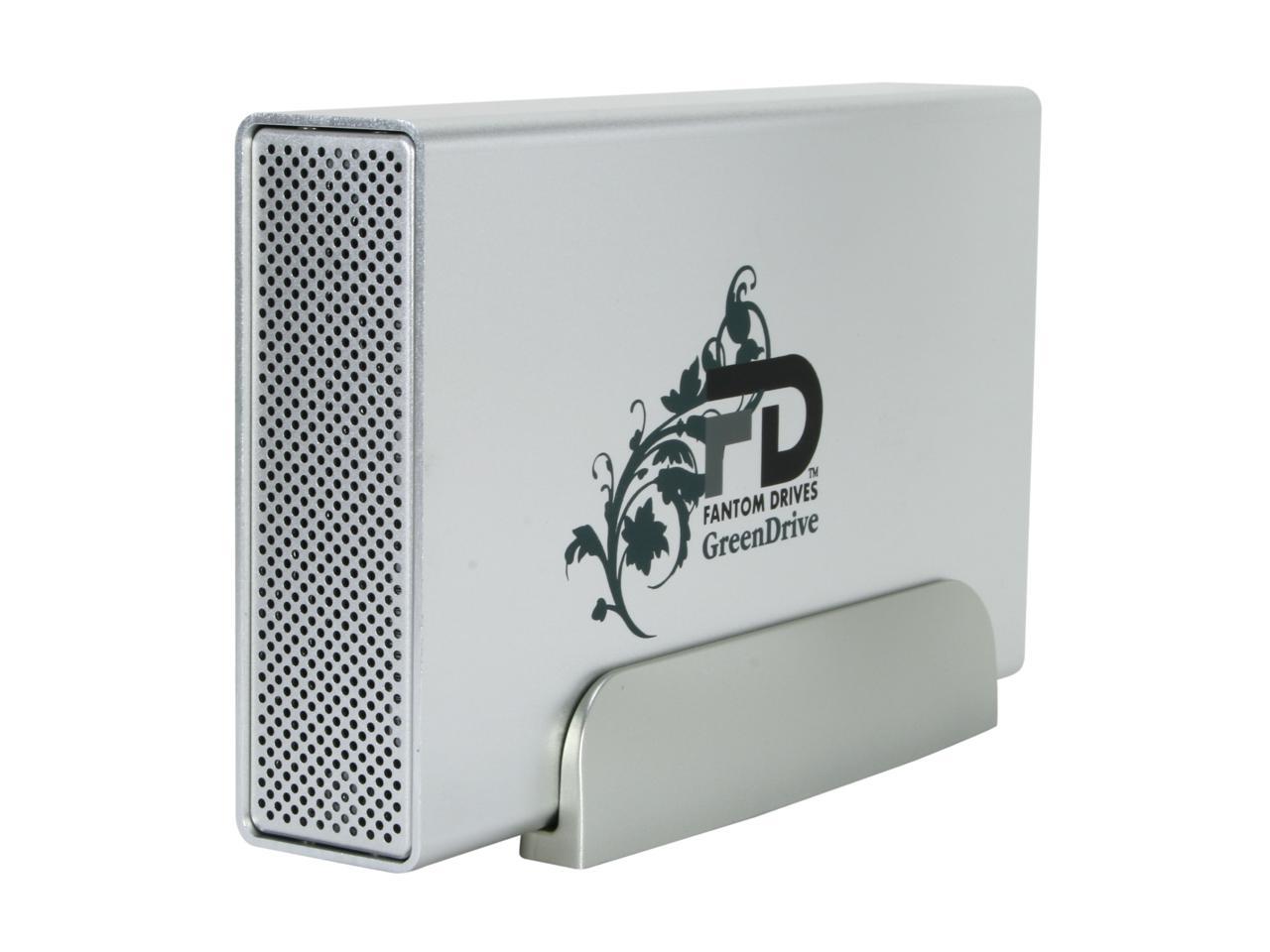 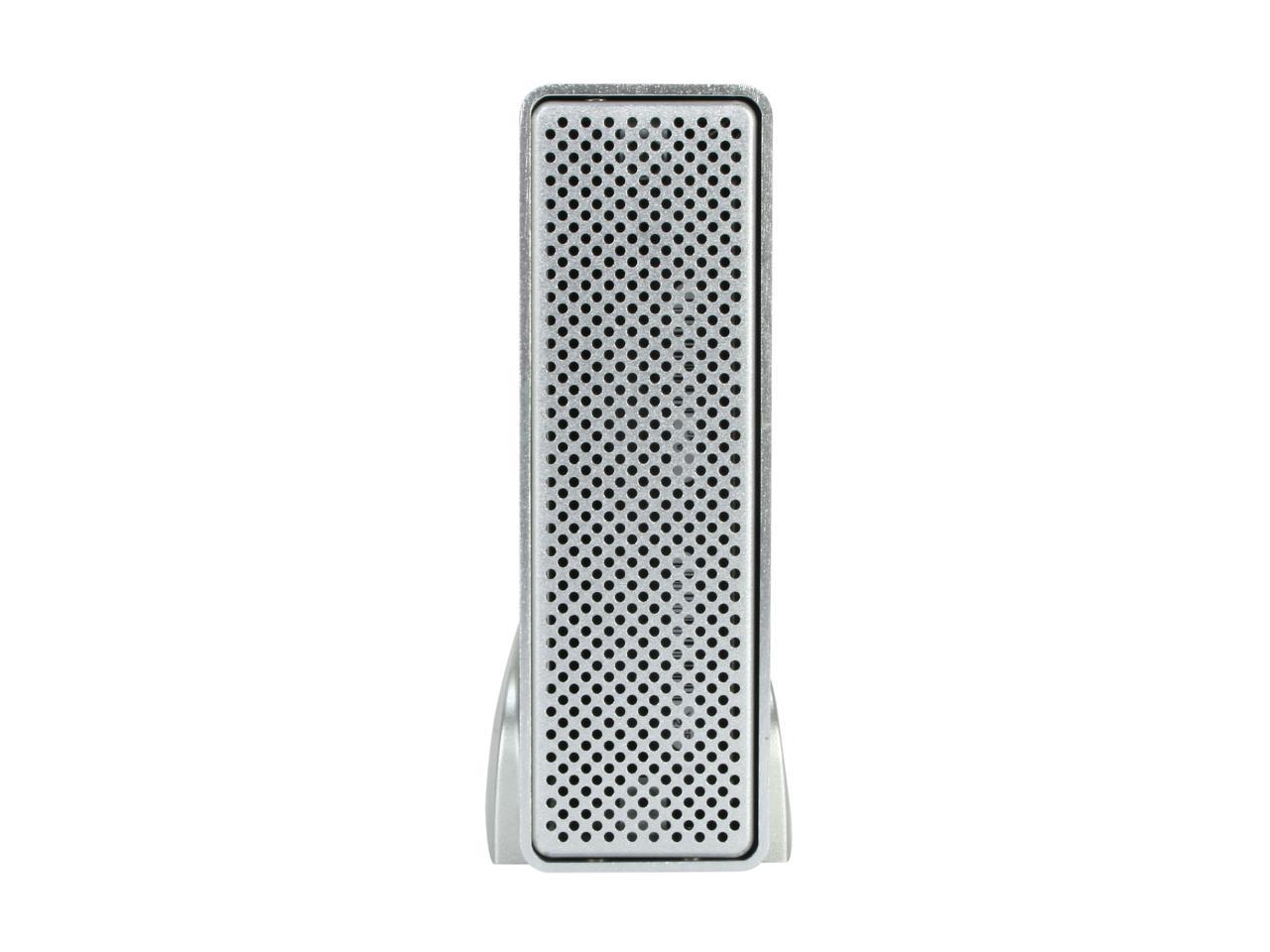 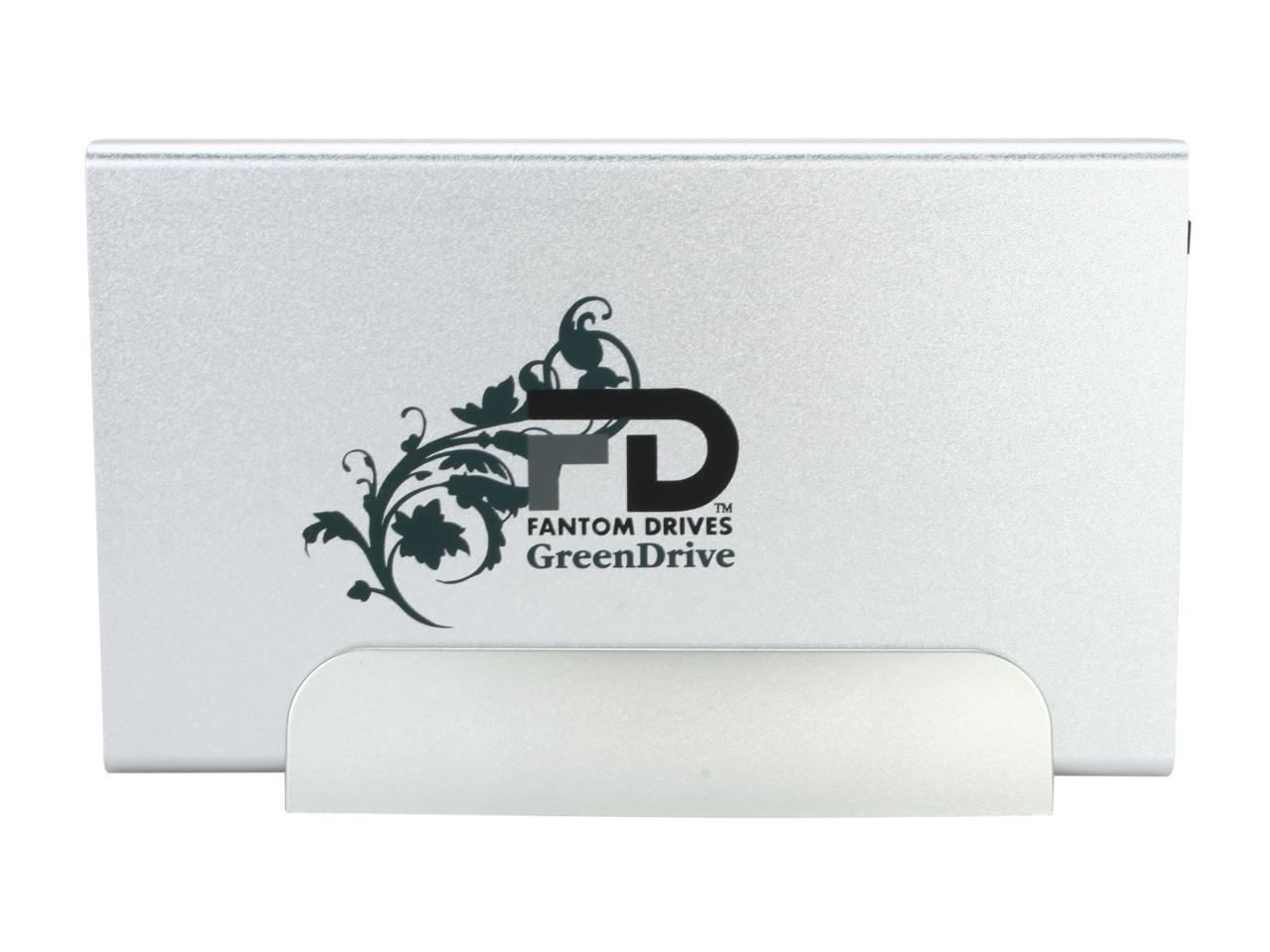 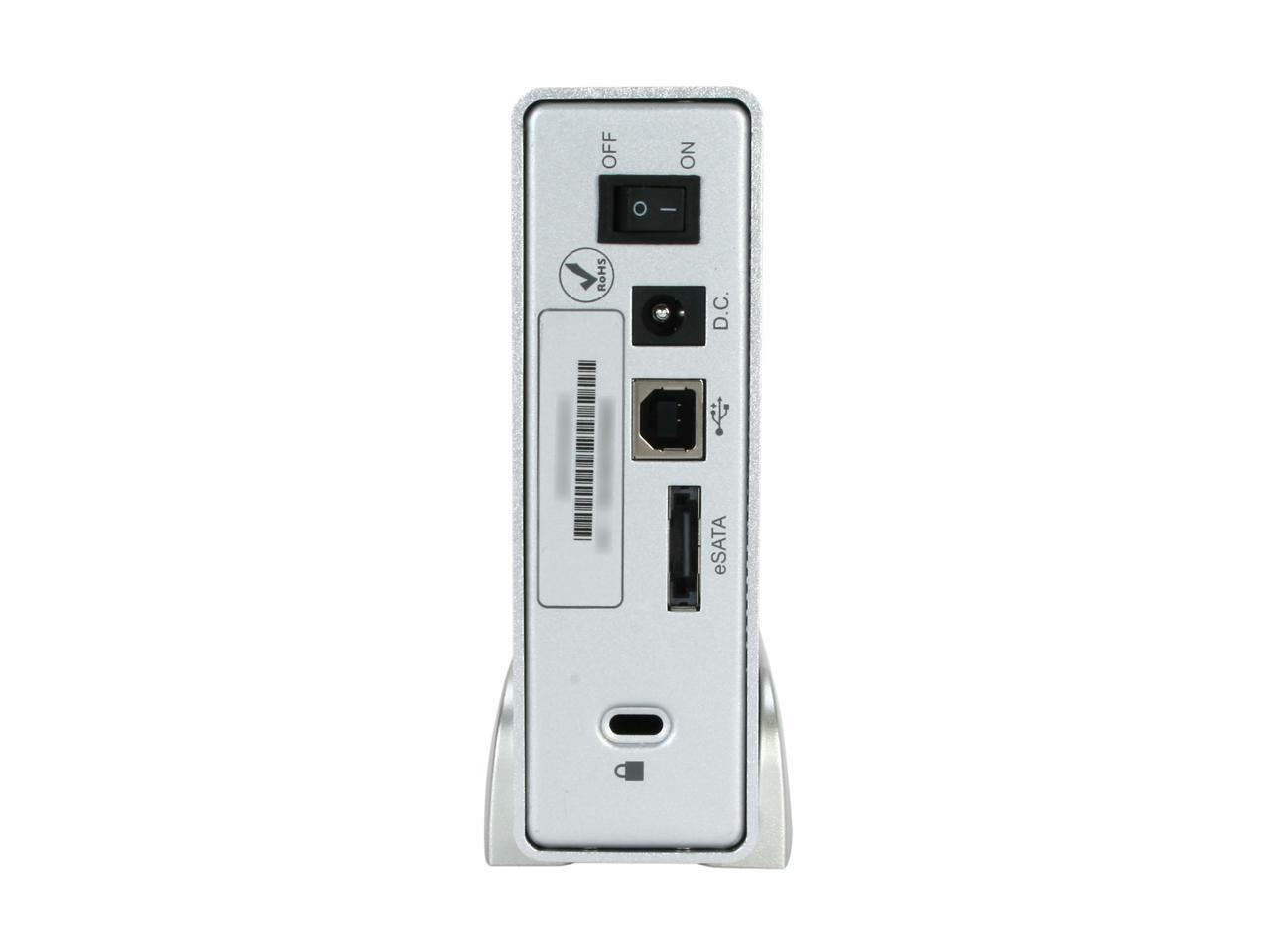 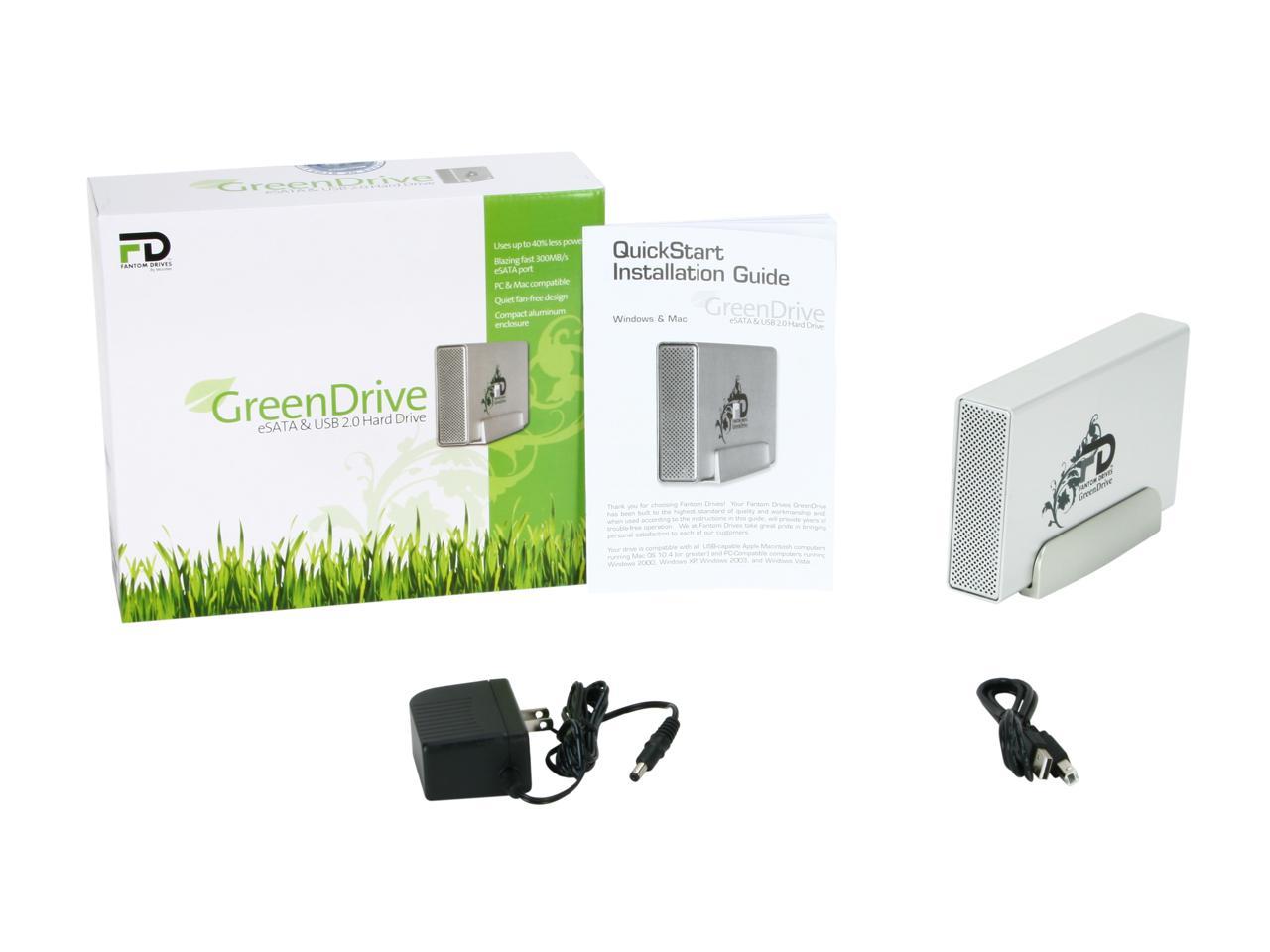 (176) Write a Review
OUT OF STOCK.
Overview
Specs
Reviews

Fantom Drives’ GreenDrive Pro USB 2.0 and eSATA disk drive is a great storage solution for protecting all your photos, music, videos, and documents in one safe, convenient place. It features the latest advances in power saving technology and RoHS (Restriction of Hazardous Substances Directive) compliant materials and process. The GreenDrive comes with a sturdy aluminum casing for maximum durability, fan-free design for silent operation, and can be placed horizontally or vertically to maximize your desktop space. This external disk drive has been pre-formatted with the NTFS file system so all you have to do is plug it in.

Pros: Dollar for dollar, this drive has got to be the best performing 2TB external to be had. Solidly-built, attractive aluminum enclosure with an exceptionally small footprint. Fanless design is effective at cooling and very quiet. LED activity light is not as obscenely bright as on other Fantom drives.

Cons: Not the fastest drive ever, but speeds are acceptable with eSATA. eSATA cable is not included, but USB is (I'll add it to my box of 50 USB cables I've never used...).

Overall Review: This is my fifth Fantom Drive of this basic design, they are my go-to for storing backups and archived project files (I deal with video). I have never had one fail or arrive DOA. The enclosures are great, the drives are brand-name, and the price is right. I wouldn't want to work off this drive, but under eSATA it's certainly quick enough for backups. I transferred 1.25TB to this thing yesterday without a hiccup, and it stayed reasonably cool. I couldn't ask for more for the price. Mac users should note that the drive comes pre-formatted NTFS, if reformatting Mac OS extended be sure to select a GUID partition table.

Cons: Reliability, Customer service. I have been trying for almost a week to get an RMA for this drive. They do not read the doc provided, but keep asking me questions previously answered, stalling, will not actually issue an RMA or return any phone calls.

Overall Review: This is the worst customer service I have ever seen for a hard drive. I have rougly 40 drive running from several vendors and have had bad drives before, but never a vendor like this that refused to back up their products.

Cons: I have 1/2 dozen of these drives. 1) I spent 2+ weeks trying to get their customer service to issue an RMA, They wasted significant amounts of my time asking what really were stupid questions, such as what power supply are you using in your Computer. (These units come with a fantom power supply, so that question is only appropriate to an internal drive.) Also, the drive failure is on multiple different machines, so tehy wanted me to describe all machines that the drive does not work on?? They just did not want to admit the drive was bad. I sent it back a month ago and they still have not sent back a replacement drive. Also, they get pretty hot. Heat is the major destroyer of hard drives. I recommend throwing away the case and replacing with a case that has a cooling fan if your data is valuable.

Overall Review: Just buy a bare drive and then get a good quality active cooling enclosure. It ie\s cheaper and easier in the long run.

Pros: 2TB, USB2, eSATA (which is the reason I got it over an external WD with the same capacity), no pesky software trying to back up what I don't want to backup, quiet fanless enclosure (as in no fans to clean), and a great price.

Cons: No eSATA cable, would have liked to be able to sit the drive flat (I'm not sure which way is up on this one and I don't want to open it and void the warranty), the stand doesn't really lock in place so DO NOT grab it from the stand or you'll surely drop it. Also, this is not so much a con but if you like your external drives really quiet this might not be for you, it's kinda noisy, it's not really the drive itself but the enclosure that enhances the noise.

Overall Review: I've been using it for 3 weeks, so far so good, I bought a eSATA cable and an eSATA bracket, works like a charm, I'm not gonna say it's just as fast as my internal drive but it sure beats USB, and my computer recognizes the drive in a flash (as in no waiting for autoplay to finish reading the contents of the drive). Also, I've read reviews about the enclosure getting too hot, I've gotta tell you that unless you're using it in a busy kitchen or in a tropical environment I don't see how it can get so warm, mine was barely warm and I had it working for 2 hours the first time I connected it, if it gets too hot contact the manufacturer as there might be something wrong with the enclosure. I got it fast, got it working fast, and that's what counts, so far I've had no problems with it and I really recommend it, for the price and the performance I don't see why I wouldn't get another one in the future.

Pros: -At first, it worked. -2TB with an eSata interface when I bought it in early 2010 was rare at this price point.

Cons: -The drive failed after very minimal use. -Customer service terrible -Fantom won't stand by their products -Warranty expired just before multiple drives failed -Even with eSata, transfer speeds were often 40-50MB/s, slower than many comparable Western Digital, LaCie, etc... products. Terrible customer service, both inconsistent and far below the bar for the industry (which is saying a lot)

Overall Review: We put ~100 of these to pilot at my company; our IT department used them to store images of high value machines offsite. Initially I was excited with these drives, but after 2 years I have to drop my review from 3 eggs to 1. Many of the drives failed within weeks or 2-3 months of the warranty's expiry. In the period we tested these drives, we typically stored one image each for 10 computers on each drive, with a new image replacing the old 3 times per year. Overall usage of the drives on average was storing ~1 TB of data for 2 years in a secure location. We would image 10 machines over a week, each machine with a 75-100GB image, and then store the drive for 3-4 months in an offsite safe, then repeat the process. So we wrote approximately 1TB to the drives once every 3-4 months. We rarely needed to restore the image, maybe once per year per drive. In short, we cycled the drive very little, and put very little wear on it relative to most external drives we use. Despite the fact we were generally using less than 5% of the drive's capacity, and were putting it through minimal start/stop cycles, several of the drives failed just past 2 years (just past the warranty). When I contacted customer service about the failures, and let them know I considered customer service to be equal to product quality in importance, they responded violently. They tried to break down my support message into questions/answers, and provided insulting answers - first explaining that "all mechanical devices fail" and then stating that the fact I would factor their customer service into my rating of their product was an unreasonable threat. I explained that my current preferred vendors - Western Digital, HP - always stood by their product and replace it even when the warranty has just expired, or offer a low cost replacement. After acknowledging that all drives fail eventually since their mechanic, Fantom explained you should not rely on their drives for any longer than their warranty period. When I said other companies customer service would typically make an exception and either cover it or offer a low cost replacement, Fantom's exact words in response were that I considered "the requisite service to be above average for companies you wish to patronize- I couldn't agree more." So, be aware that Fantom doesn't expect their products to last beyond warranty, won't do anything if they die within weeks of the warranty's end, and openly say that if you want better customer service, go elsewhere. If you only need a drive for 1-2 years for light use, this can work for you. If you need it for heavier or longer use, I would recommend Western Digital, LaCie, Seagate or even Iomega - they stand behind their products more and in our experience we have much lower failure rates with heavier usage.

Overall Review: Drive has crashed twice now. Second time I was able to recover some data (took 3 days to get off 80% of it). Windows will not format the drive now, tried to RMA told them the story above, they never responded again. Waited a week tried RMA again no response. So after having 4 months I have a dead drive and no customer support.

Manufacturer Response:
Thank you for your feedback. We are sorry to hear you're having trouble with your unit. If you haven't already done so please go to our website to obtain an RMA# for repair/replacement. If you have any questions please contact our support department at 1(800)800-DISK(3475) select option #2 for Technical Support or email us at support@micronet.com
BENJAMIN B.
Ownership: 1 day to 1 week
Verified Owner
Poor eSata9/4/2011 11:12:53 AM

Pros: Worked after I used the USB adapter instead of the eSata.

Cons: Could not detect the drive using the eSata adapter. I have another 2TB Fantom drive (GF2000EU) that works fine using eSata and is on the same adapter card.

Overall Review: This is the 2nd GDP2000EU drive I've received. The first one I had to RMA because it actually DID get detected using the same eSata cable. But after a couple of minutes, it would bring my computer to a crawl. I received another GDP2000EU in it's place and eSata doesn't work at all on it. But I can live with the USB. I would've preferred eSata since that is what I was aiming for. I may still RMA this back after a bit more testing. Last thing I need is a backup drive to have problems with connections.