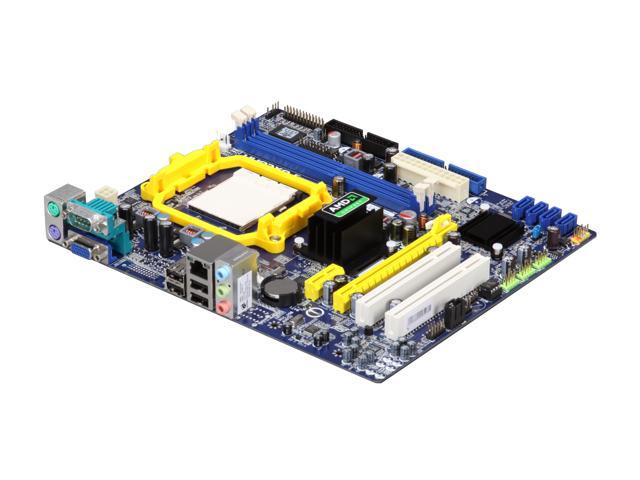 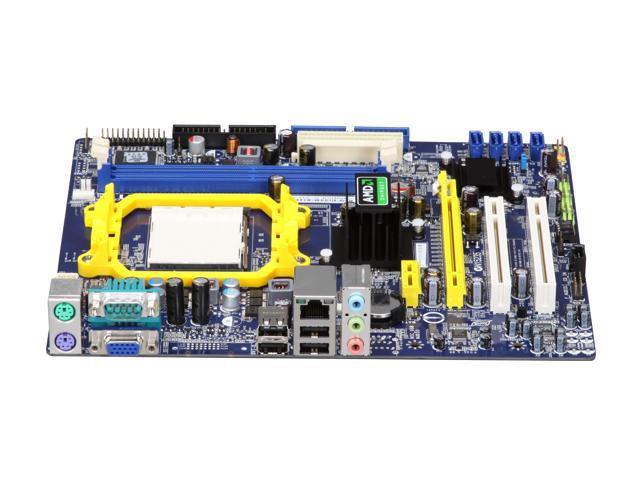 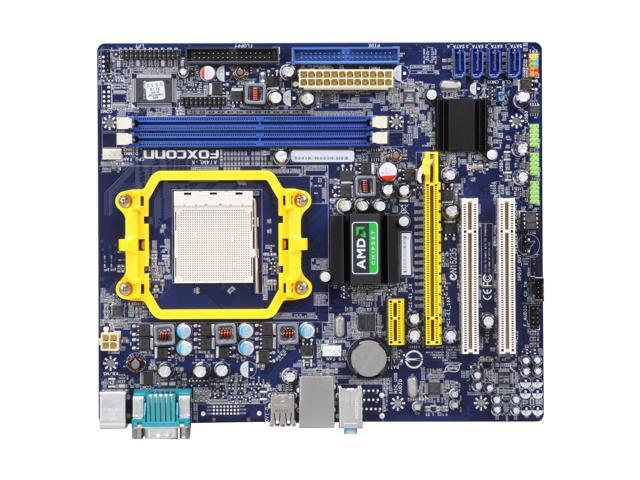 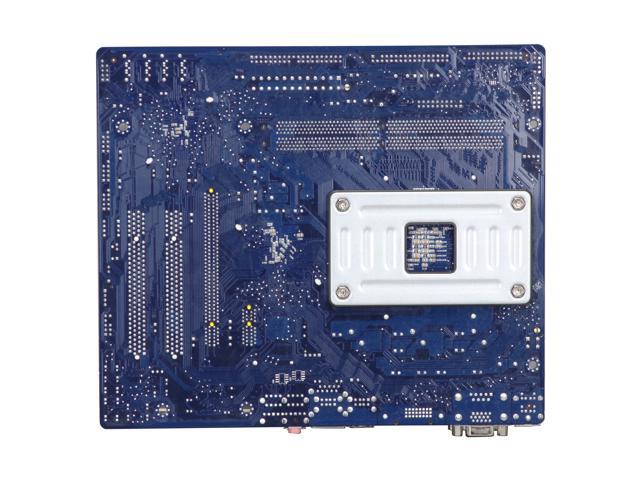 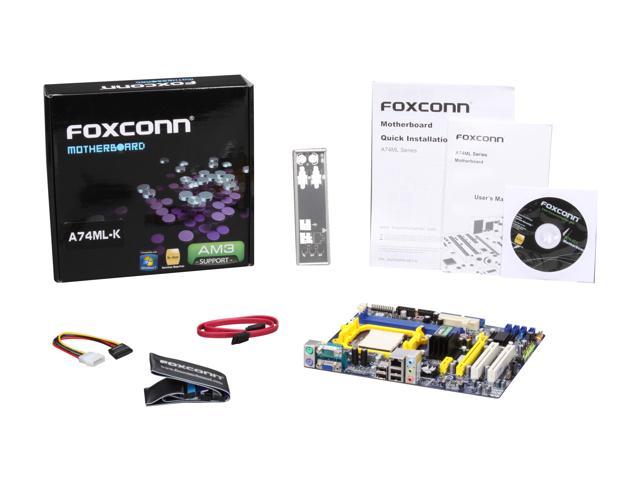 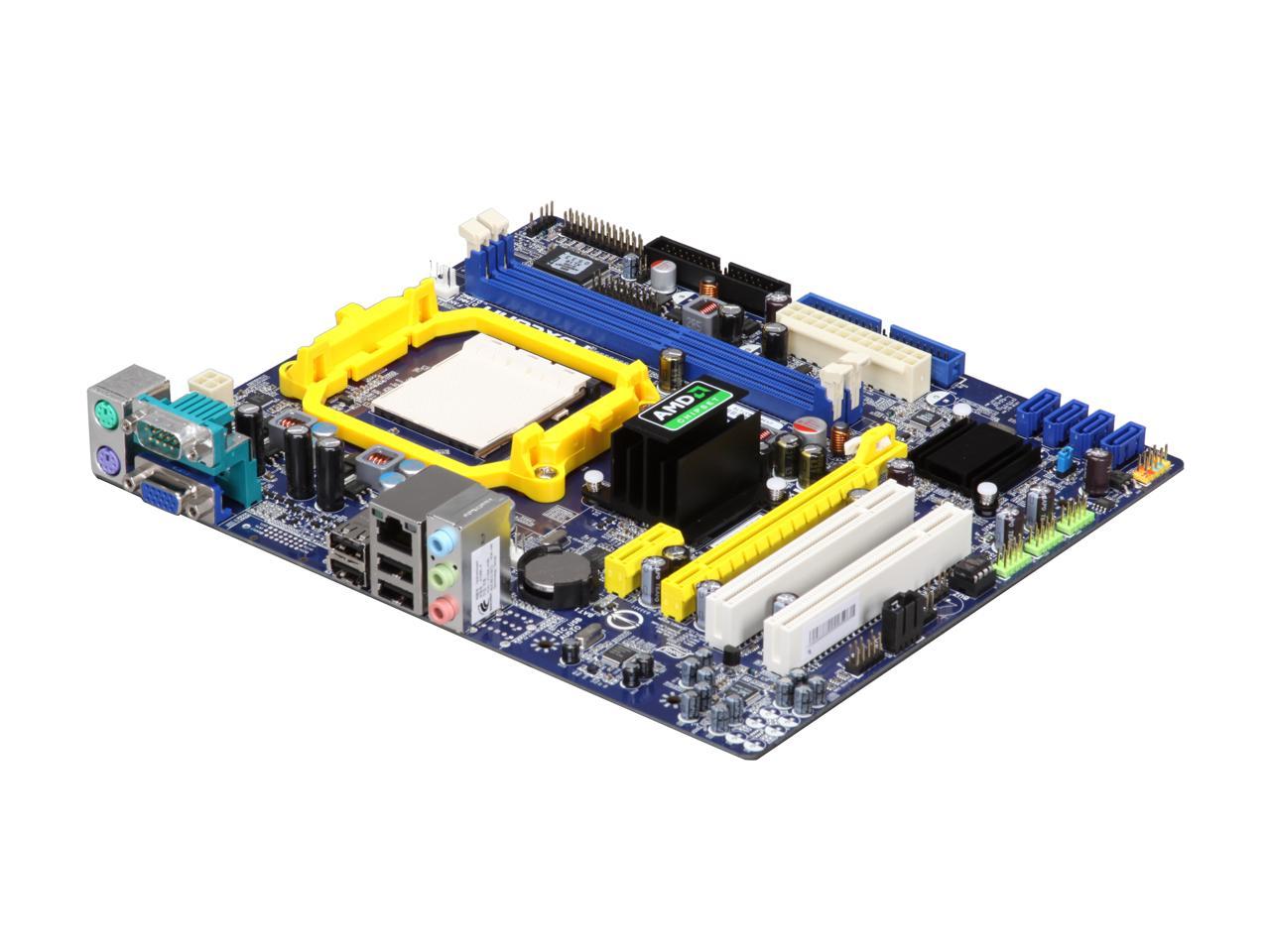 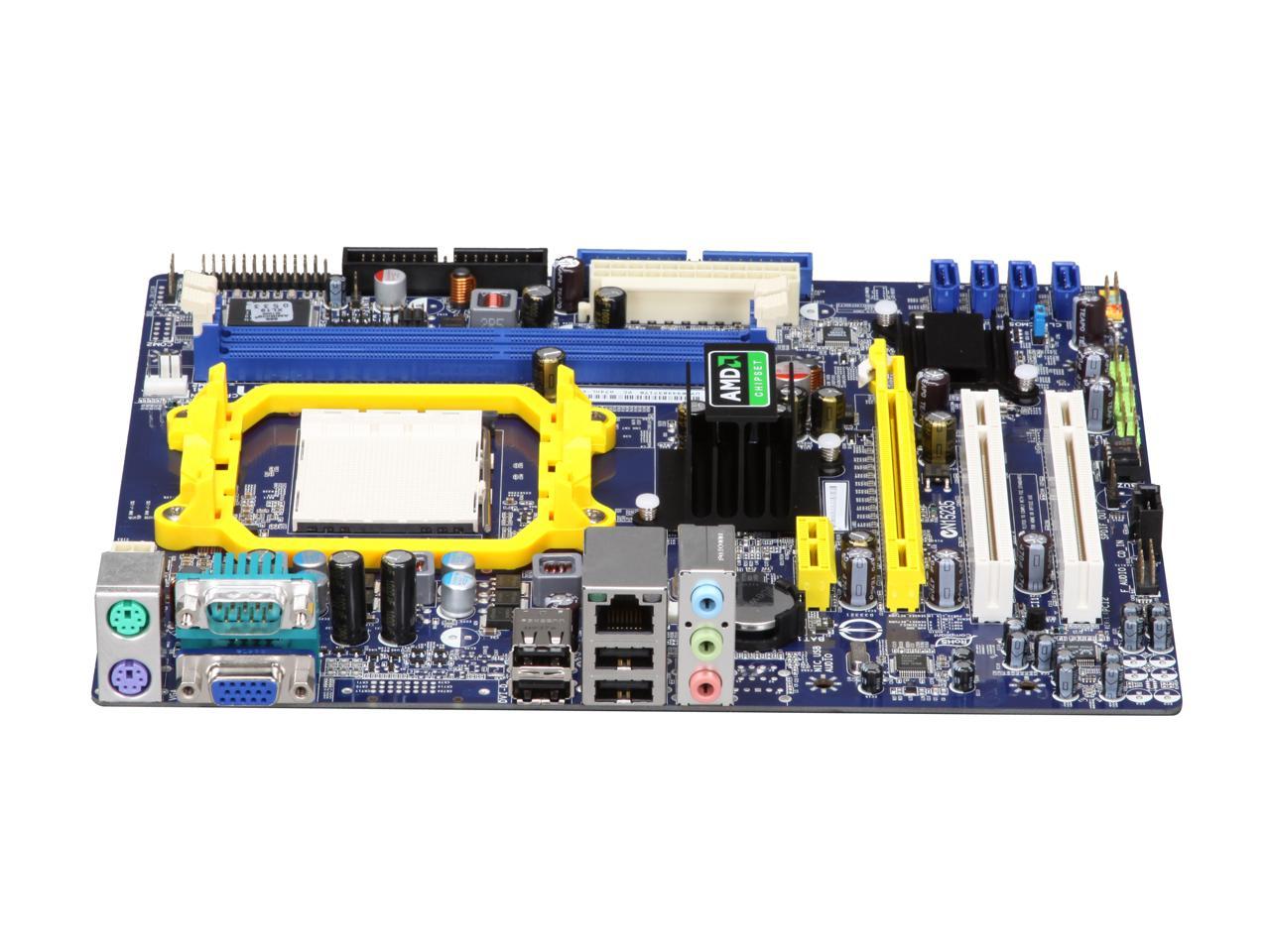 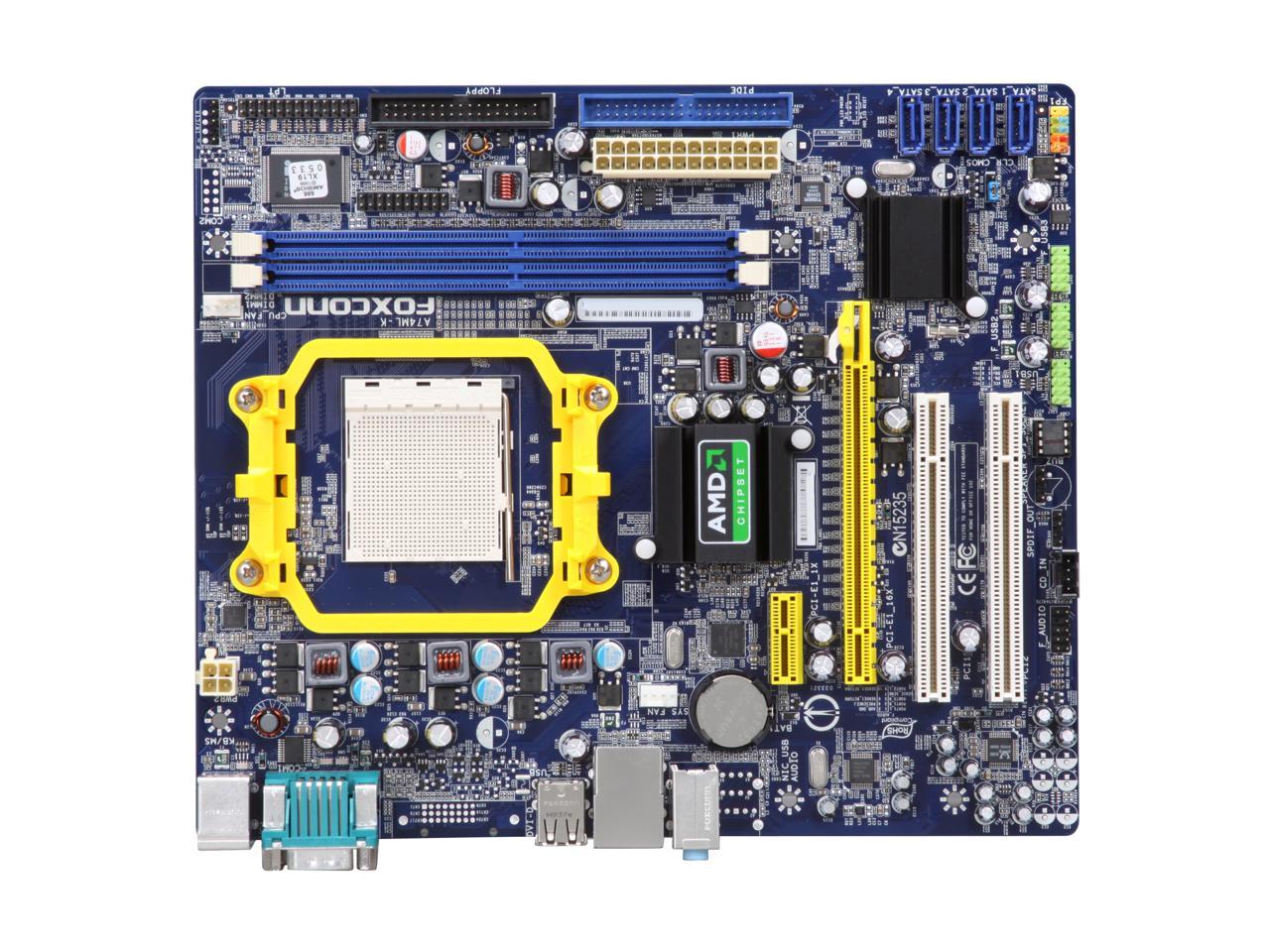 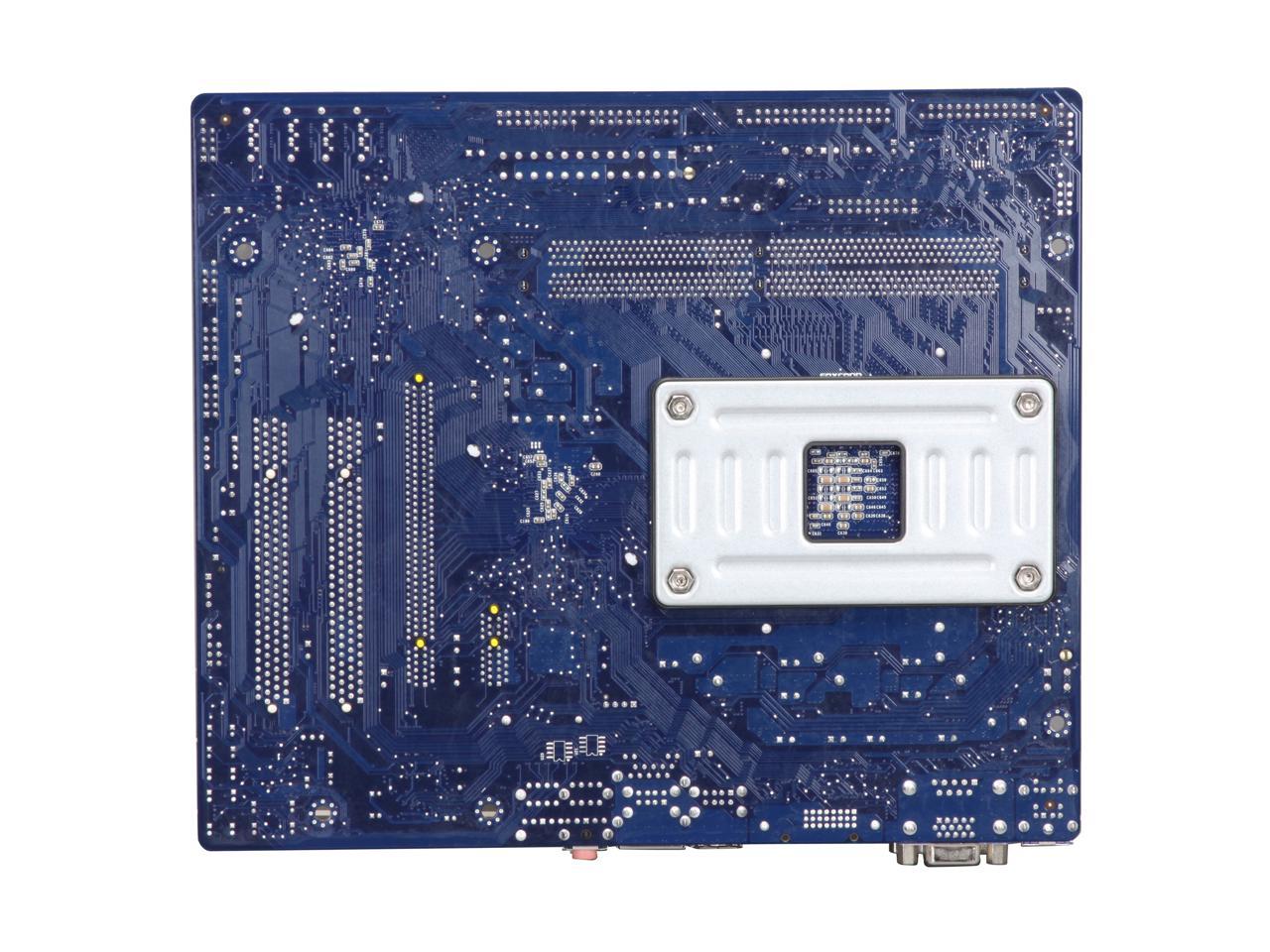 (127) Write a Review
OUT OF STOCK.
Overview
Specs
Reviews
Foxconn's A74ML-K is a micro-ATX motherboard based on the AMD 740G chipset. This affordable board supports AMD's AM3 AM2+ and AM2 processors including the Phenom II, Phenom, Athlon and Sempron CPUs with a 1000Mhz front side bus. It can fit up to 4GB of DDR2 memory into the two 240-pin slots for best performance with dual channel support and 1Ghz HyperTransport technology accelerates communication between the CPU and the other components.
The ATI Radeon 2100 onboard video chipset delivers excellent performance and the PCI-Express x16 port adds extra capabilities along with the two PCI and single PCI-E x1 slots. Accompany the video with 6 channels of sound generated by the Realtek audio chipset. Control up to four SATA-2 devices and ten USB 2.0 connections means never having to disconnect a peripheral to attach a new one.
Connect at broadband speeds with the Gigabit Ethernet LAN and hook up to a flatscreen monitor with the D-Sub output making the A74ML-K ideal for use in an on-the-go gaming box.

Learn more about the Foxconn A74ML-K

Pros: Price/Performance is outstanding. Stable, great bios features, you can't ask more out of a budget board.

Cons: I had originally bought the board to build a Linux box for my niece (teach them young people!). The ATI 2100 has built in drivers for Ubuntu 9.10, but performance (obviously) is lacking. I wouldn't mind so much but I wanted her to at least be able to play tux racer extreme..

Overall Review: I bought a ATI 4850 (which has great drivers from ATI and the open source community) to go with the board, and even at that it pushed my total system cost to only $350. It'll be a great system for her.

Cons: No DVI port, No PCI Express 2.0. Built-in graphics are just shy of playing decent HDTV. If you are looking for an HTPC setup, there are easier boards around. the extra 10-20 bucks will be worth it to you (unless you have an extra HDTV capable graphics card laying around)

Overall Review: For my uses, this is replacing an Intel Atom 330 D945GCLF2 board. Now I have the option of putting in more hard drives, RAID, add-in cards for TV tuners and such. Great little board for the price you pay! This plus a Regor 240 will cost you only 20 bucks more than the Intel Atom board, but does a heck of a lot more!

Pros: A very solid motherboard for the price and performance. I bought this Board to replace a fried one. I coupled this board with an Amd Rana 945 and it runs like a beauty while on the stock cooler it has never reached 40 C so its a pretty good combination. Another pro of this board is the multiple Sata Connectors and the use of DDR2 memory which is a little outdated but its good if you are on a budget like I am.

Overall Review: A very nice Board for the price.

Cons: - Only supports a max of 4GB's of RAM - Terrible SATA placement. (Any decent video card will obscure all but 2 of the SATA connectors. - Died on me in less than a year.

Overall Review: It was a good Mobo while it lasted. Sadly, I turned it of before bed last week, and woke up to power my PC on? Nothing. First hunch was it was the Power Supply (Even though it was still powering everything just fine), until I replaced it. Only to find out it wasn't the PSU. I then tried stripping everything, and testing only with the fans, CPU, and RAM in the Mobo, and the monitor hooked up to the Onboard Video Card. (I also tried this with my actual card)... Still nothing. Monitor works fine, as it's being used with my netbook right now. So by process of elimination, it could really only be this board. The sad thing is; I don't know WHY it just started doing this out of nowhere. That's the most annoying part of it all. Not that it died - that it showed no symptoms. (Never went over 110 degrees farenheit, in my case. And that was under load.) Again; Good while it lasted, but now I'm stuck without my PC, and searching for a new Mobo.

Pros: Cheap. Worked out of the box. Great overclocking features, especially for a board this cheap. Has multiplier setting option for black edition CPUs.

Cons: From my expirience with it, the onboard HD 2100 is somewhat appauling. At least with the on-CD drivers ,and single channel DDR2 667, the onboard HD 2100 played my test game (Call of Duty UO, on the map "Cassino") worse than my other athlon x2 that also has single channel DDR2 667, and a geforce 7025. the 7025 is in the 60s-70s FPS on medium GFX, 800x600, the 2100 was all over the place from 10-30 on low GFX, @ 640x480. These frames were tested with the on-CD drivers, which may accout for the framerates, as it seems that manufacuturers always seem to put the worst possible drivers on CD. I cannot remember what version they were, as this motherboard is being used in a webserver across town.

Overall Review: CPU's voltage regulator mosfets are nikos brand. Nikos mosfets are famous for their room temperature "max operating temperature", and high unreliability when they operate above said max operating temperature. However, after a couple of hours of prime95 with an old 65W AM2 athlon x2 4000+, the mosfets didnt really heat up at all, they stayed about luke warm.. This board has a good array of OC settings, but I would be very cautious about using them, especially with anything that is rated for more than a 65W TDP. Conclusion: if you have an old 65W cpu laying about that you need a motherboard for, this is a great choice.

Pros: Cheap cost. Works good and had no problems installing Windows 7 64 bit ult on it. Fit in my low end case with no problem. Nice instructions for installation. If you need them. I bought this to build a tower for my son to get him off mine by using left over parts i had acquired through out the years. HE LOVES IT.

Pros: For the price it's hard to beat. Runs my Phenom II just perfectly. Works great with Linux & Windows. Doesn't have built in DVI but toss in a PCIx video card and you're rocking. Exceptional performance for a budget board. This will be my 1st foxconn board and would buy again. Thanks NewEgg for a day early shipping. A+++

Cons: First board was DOA, no video from onboard or from a video card I had. Second board was exactly the same.

Overall Review: Another reviewer stated how their box wasn't sealed. Same deal with mine, though the motherboard itself was wrapped in an anti-static bag. I won't be purchasing FOXCONN again.

Manufacturer Response:
Dear Valued Customer, We apologize for the experience you had with your Foxconn product. First,please refer to FAQ:http://www.foxconnchannel.com/en%2Dus/support/faq_detail.aspx?ID=en-gb0000079 If it can not fix your issue ,lease contact officiate warranty via RMA center in US,Please dail below tel number and ask for RMA. Tel: 1.909.978.6556 (8:30am - 5:30pm PST; excludes national holidays) Best Regards Foxconn Technical Support