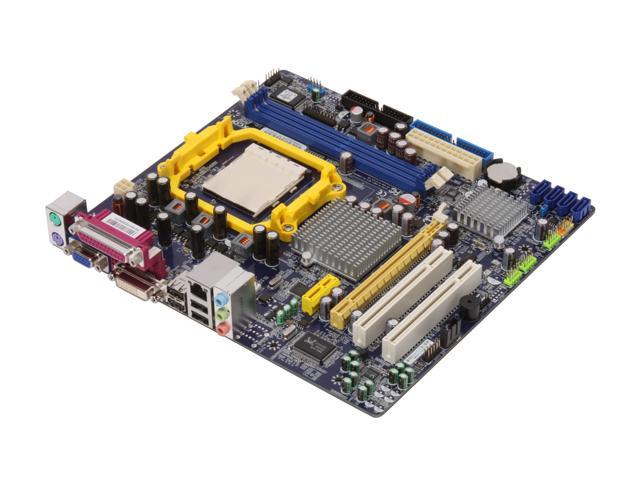 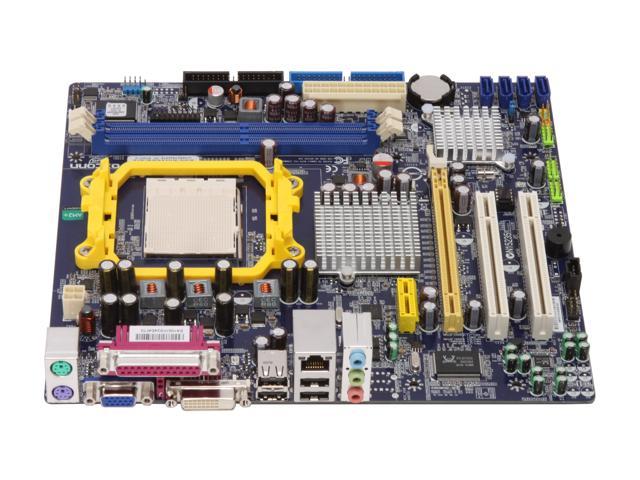 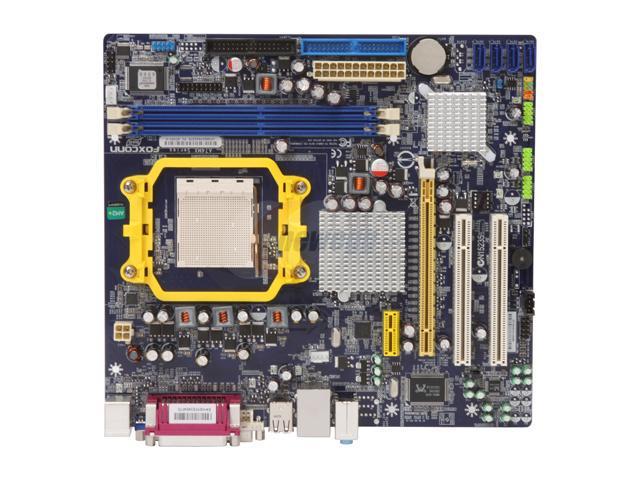 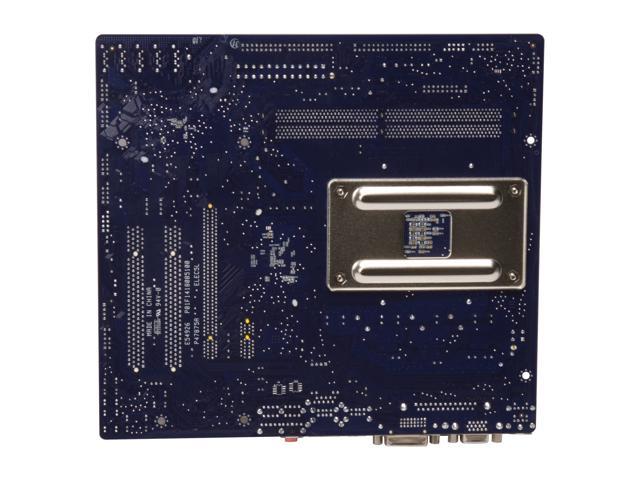 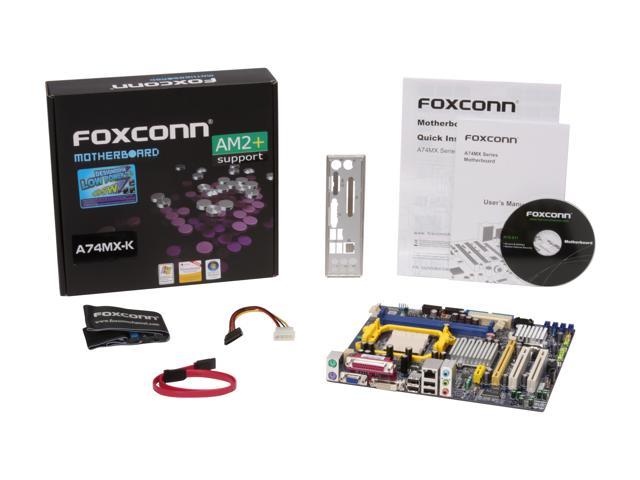 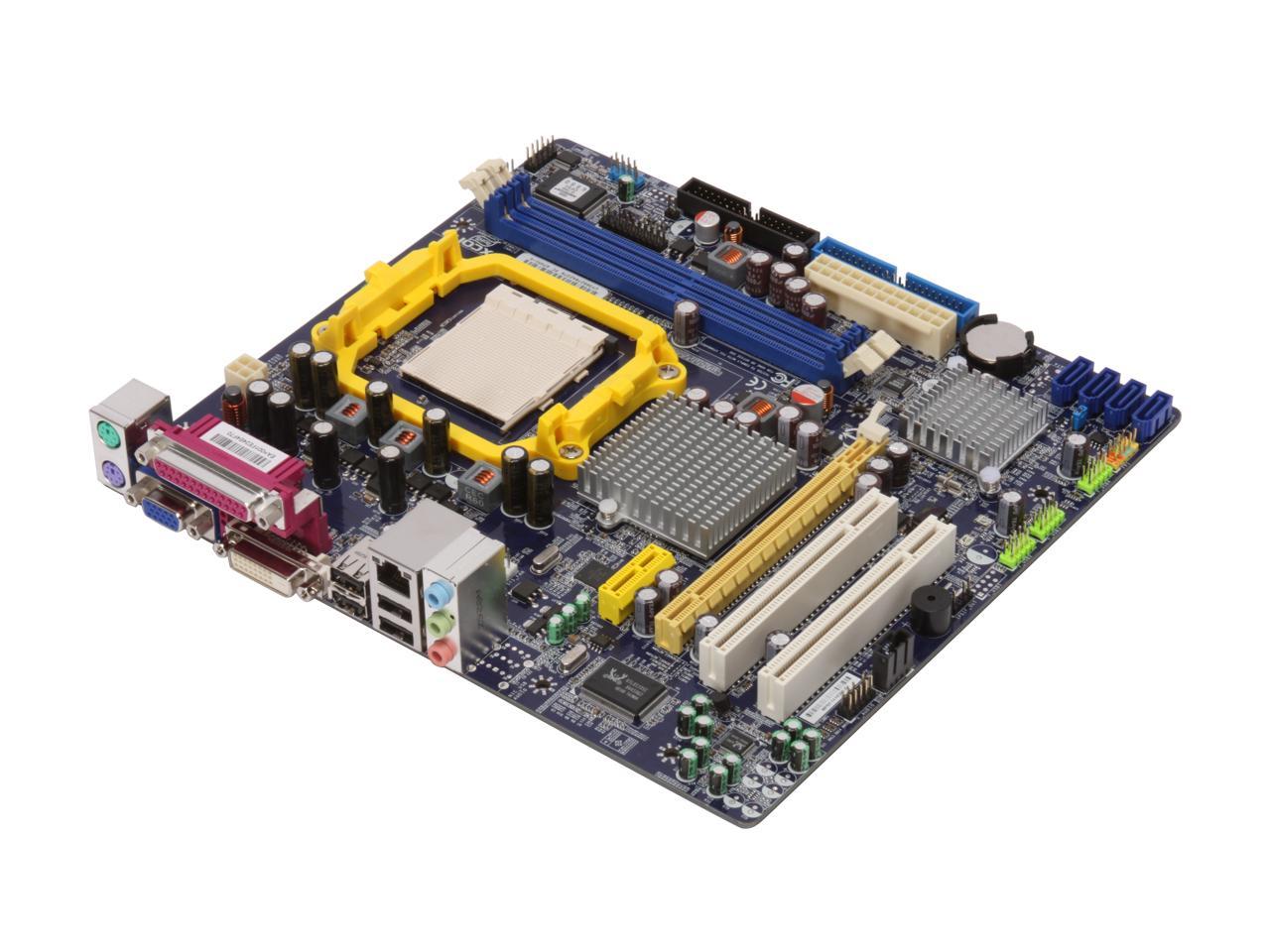 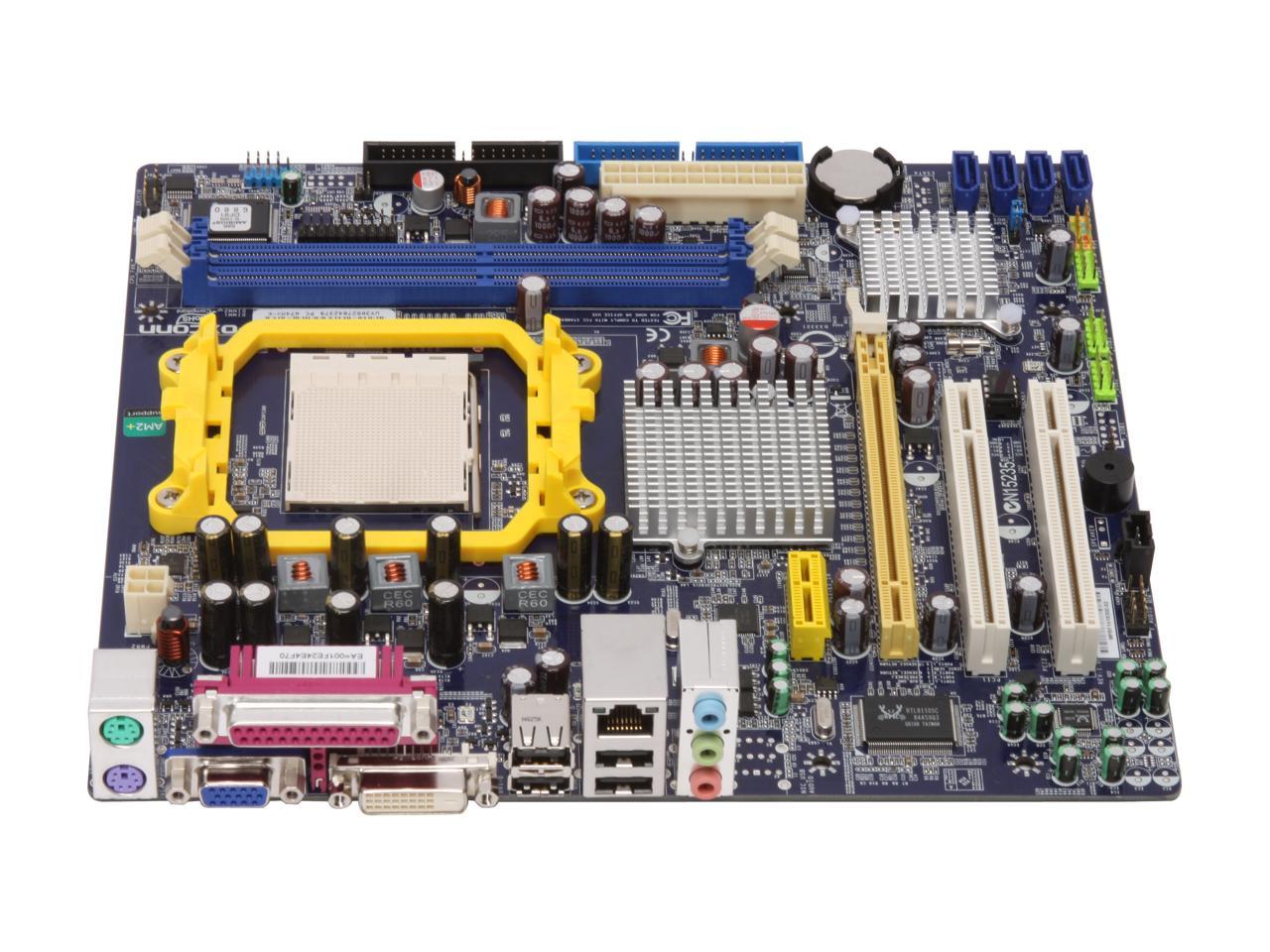 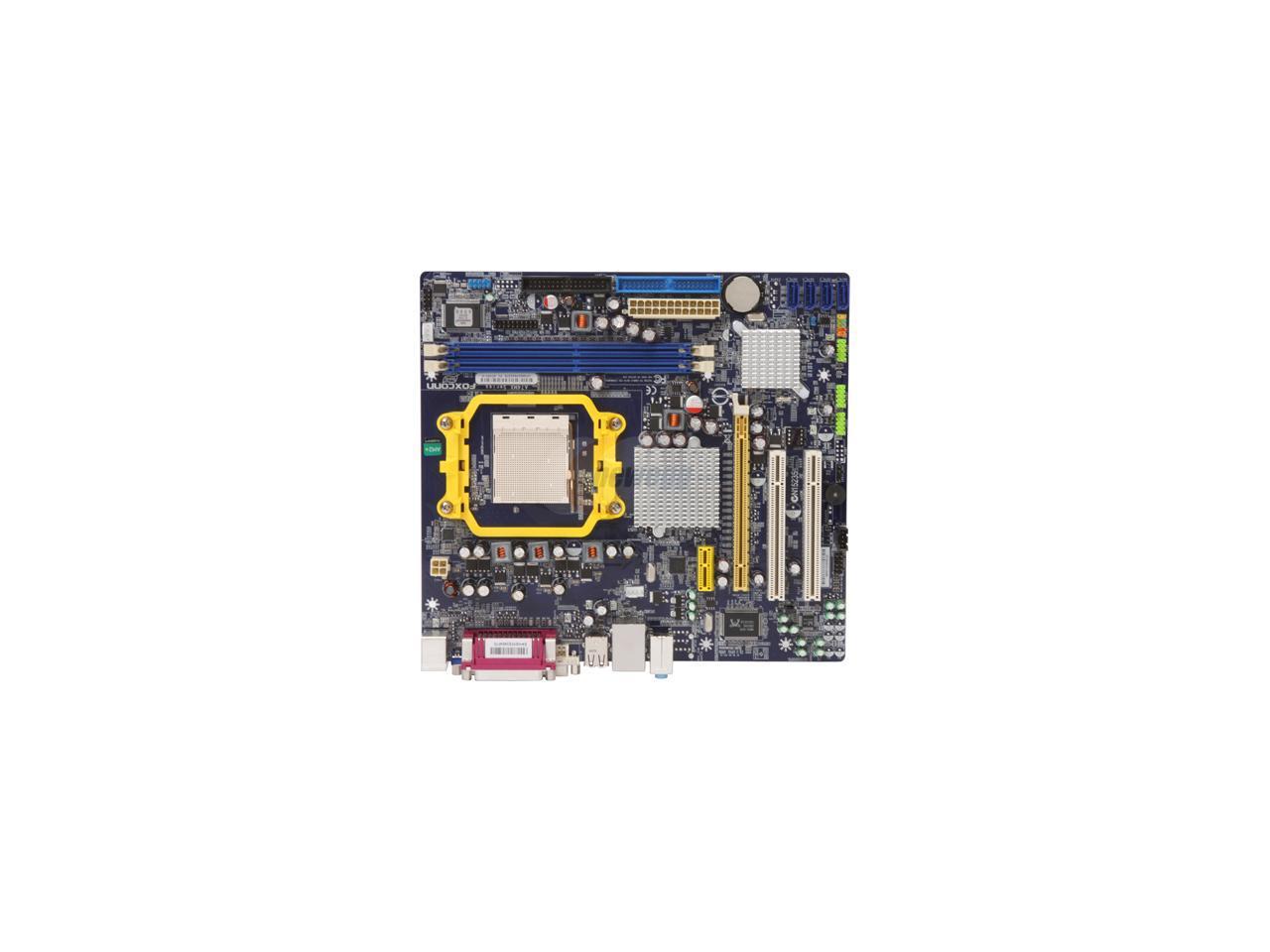 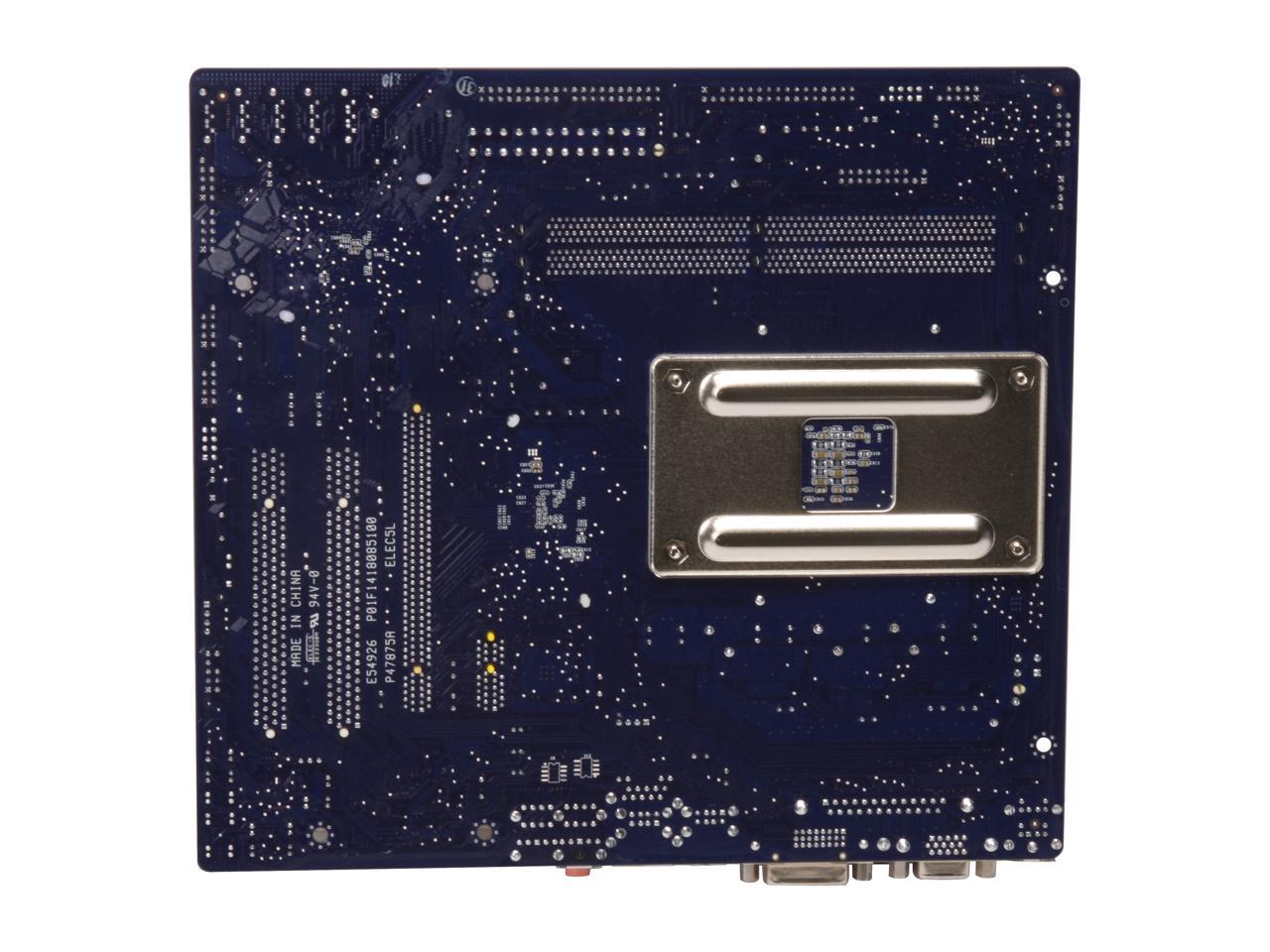 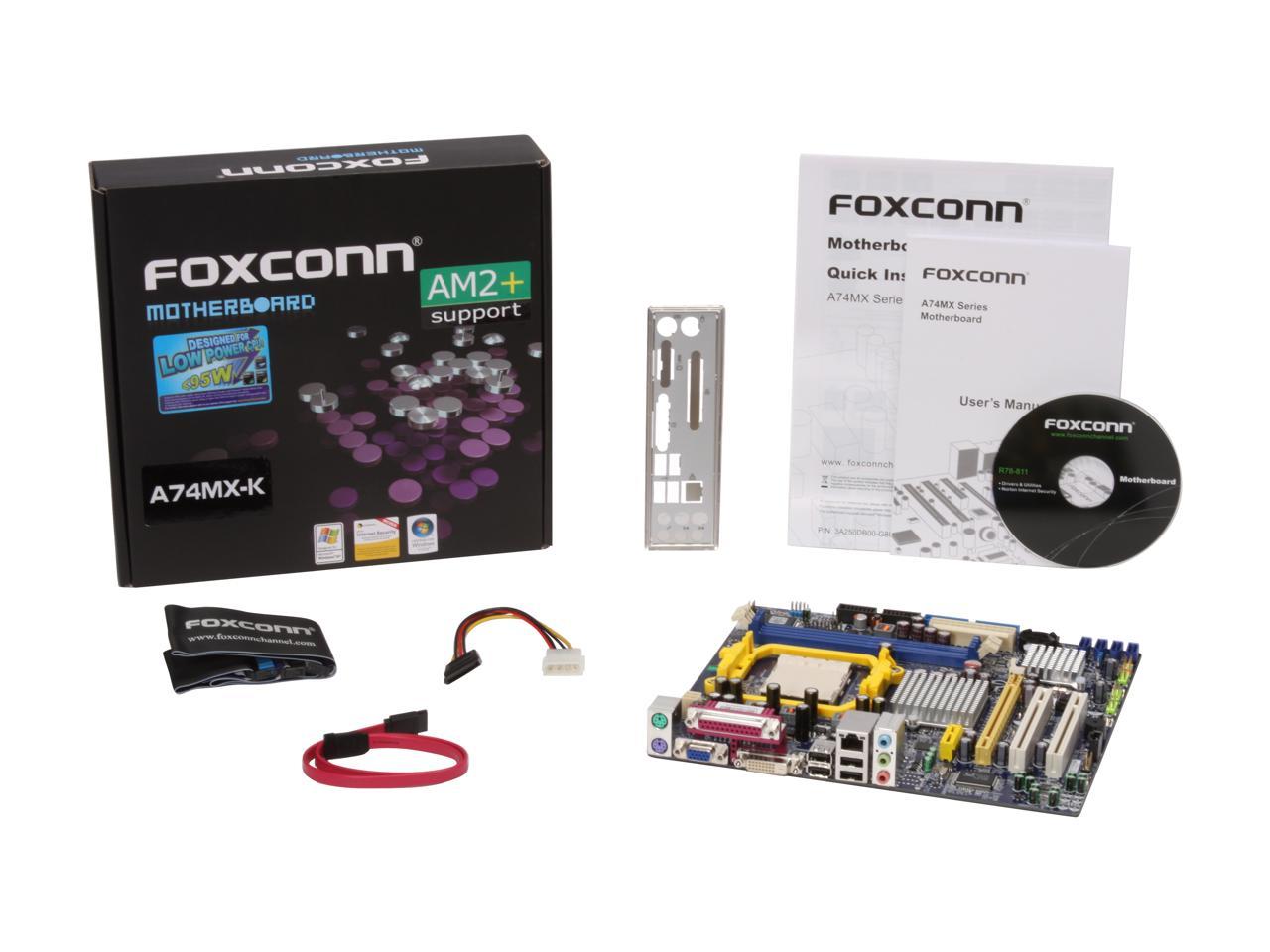 (215) Write a Review
OUT OF STOCK.
Overview
Specs
Reviews
Foxconn's A74MX-K is a micro-ATX motherboard based on the AMD 740G chipset. This affordable board supports AMD's AM2+ and AM2 processors including the Phenom FX, Phenom, Athlon and Sempron CPU's with a 1000Mhz front side bus. It is Windows Vista certified and can fit up to 4GB of DDR2 memory into the two 240-pin slots for best performance with dual channel support and 1Ghz HyperTransport technology accelerates communication between the CPU and the other components.
The ATI Radeon 2100 onboard video chipset delivers excellent performance and the PCI-Express x16 port adds extra capabilities along with the two PCI and single PCI-E x1 slots. Accompany the video with 6 channels of sound generated by the Realtek ALC662 audio chipset. Control up to four SATA-2 devices and a dozen USB 2.0 connections means never having to disconnect a peripheral to attach a new one.
Connect at broadband speeds with the Gigabit Ethernet LAN and hook up to a flatscreen monitor with the DVI output making the A74MX-K ideal for use in an on-the-go gaming box.

Learn more about the Foxconn A74MX-K

Pros: Can't say much because I got this for my sister to replace the old original motherboard in her already budget-class Compaq desktop. Runs well with an AMD Athlon 64 X2 2.6GHz 45W 65nm CPU, 4GB of DDR2, and Windows XP. The onboard graphics is plenty powerful for what they (sis and hubbie) do in Win XP, which is mostly just surf the web, upload pictures from digital camera of baby, and occasionally rip a DVD. It has good features for being a budget, micro-ATX motherboard, and again runs well.

Cons: 740G chipset isn't awe-inspiring, but it does what it is designed to do.

Overall Review: This is a good motherboard if you need something very cheap, small, and reliable. If you are looking to play games, you'll want to upgrade to discrete graphics or get a 780G or 790GX motherboard. Power users should avoid this motherboard as it won't satisfy their heart's content (for what? power, of course!). Consider that AM3 motherboards are now available and soon AMD 800-series chipsets, so this is falling behind on the tech curve.

Pros: I have this mated with a AMD Sempron 64 3400+ Manila and it is working great. I am about to put Windows Home Server on it so I can mess around with the home network/server thing.

Pros: With the current rebate it is DIRT cheap. The 740g w/ ati2100HD onboard video is a decent choice for a mid performance HDPC or basic+ system. After updates this Foxcann micro gets the job done.

Cons: There is NO option in bios settings to adjust the ram timings such as 444 12, you can only increase the voltage for the ram. You need to use FoxOne to online update your bios and utilities as well as drivers for lan & audio but let me highly advise that you go directly to AMD.com for chipset and video drivers.

Overall Review: Being a hardware enthusiest I just love the smell of new electronics. Just built 2 dual-core hdcp's with this board they fly right after a bunch of tweeking.

Cons: Wish it had 4 memory dimms

Overall Review: I bought this motherboard for a low power/green budget system to have in my room and it works flawless. I have it paired with an AMD Sempron LE-1100 Sparta 1.9GHz CPU, 1GB Kingston DDR2-667, Seagate 7200.10 250GB Harddrive, Samsung 22x DVD-Burner, Antec Earthwatts 380W PSU, Antec NSK Case

Pros: Used board for system for 6-yr old granddaughter. Setup was very easy, everything worked perfectly. Excellent bios options and Utility software is outstanding. Their live update worked flawlessly to update bios and drivers. The Fox One utility is the best hardware monitor I have seen. The Fox logo utility is a very nice feature - made screen to personalize boot-up and it worked perfectly. Video is very good, handles children's games very well.

Overall Review: My first experience with FoxConn and I'm blown away with their combination of price, utility and innovation. I didn't have great expectations, but this board exceeds anything you'd expect for the price. I considered it just for a mid to low end purpose, but it will handle much more.

Pros: Worked out of the box, still working. Drivers loaded right up.

Overall Review: I wish they would do away with rebates or make them instant rebates!

Pros: Installed fast. Loaded Windows 7 Beta 32 bit very fast and worked fine. Windows 7 seemed to install all the drivers needed automatically. Manual had good drawings and instructions. Recognized SATA hard drive without any extra drivers during Windows installation. This was my first Foxconn and I would purchase this one again.

Cons: This board is limited to 95 Watt AMD processors so the high end quadcores at 125 and 140 Watt would not be an option.

Pros: Everything on board. GigE LAN, Audio, VGA HD 2100, all works fine. On board graphic chip gets 3.0 Vista Experience Score and drags down all others (5+) but sufficient for office apps. Tons of options to adjust settings in BIOS or with software utility. BIOS was up to date. I checked out the layout in manual and had NO problem with setup (connecting front panel). Comes with real printed manual explaining all options like in the good old days. Lots of settings for multiplier, CPU voltage, mem voltage and timings, FSB, etc. This board screams for a black edition CPU. Cheap!

Cons: It was not free and I still had to pay $40 AR. ;-) Graphic chip not like a real card for gaming, but good enough for else. 3.0 Vista score for gaming and 3.6 for multimedia. Live Update works but slow. Chipset update of 90 MB from Foxconn servers were super slow and updates trickled in at 15 kbps like in the old days. Had to have coffee in between.