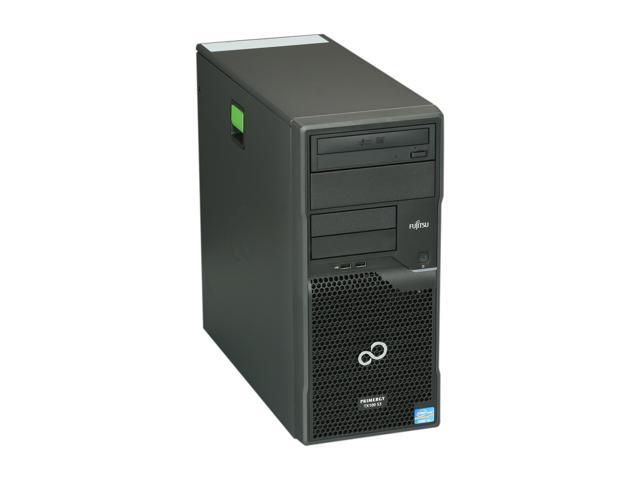 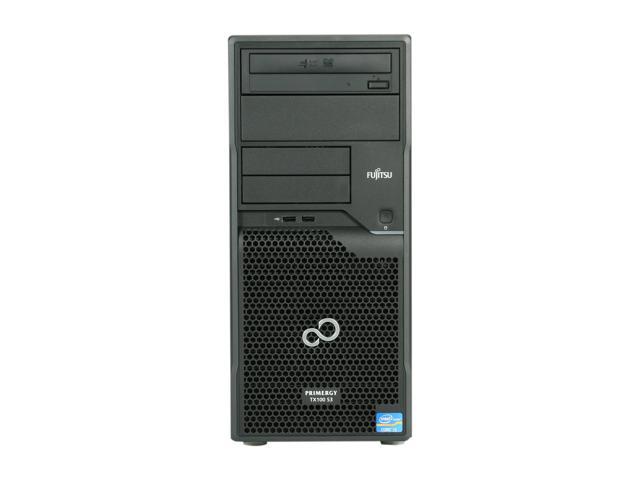 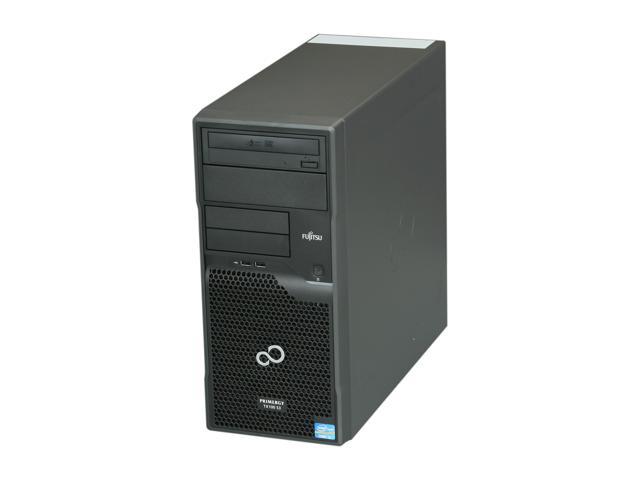 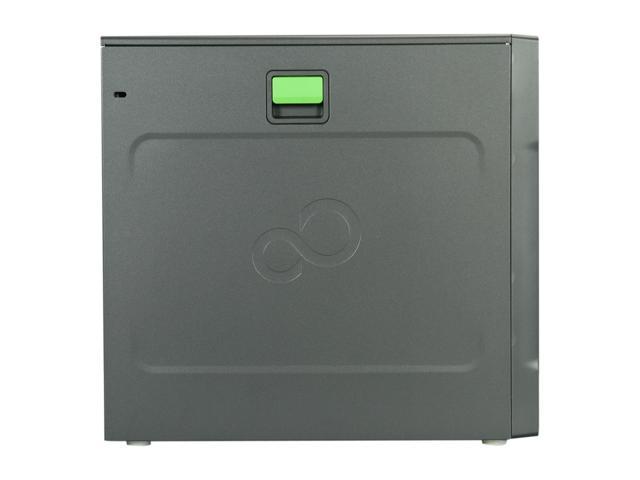 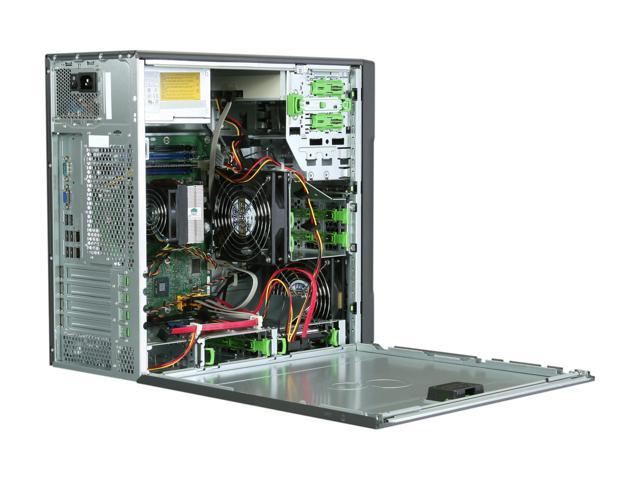 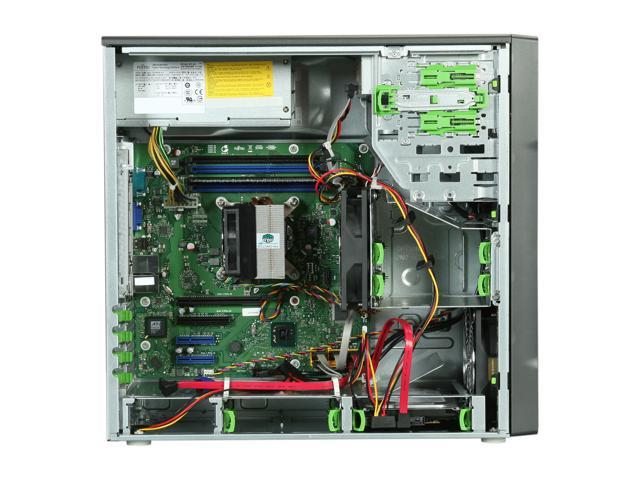 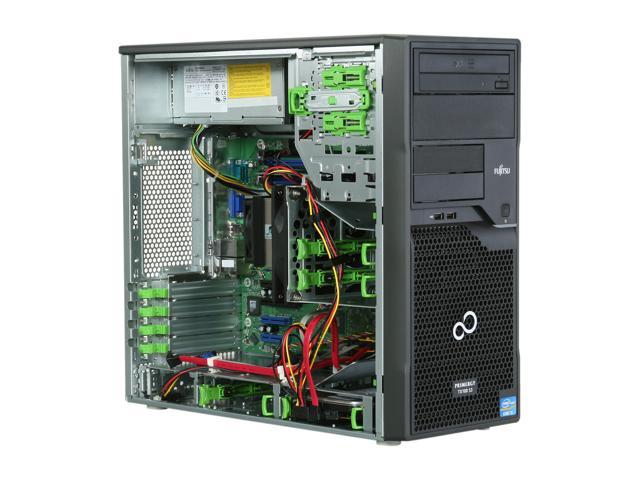 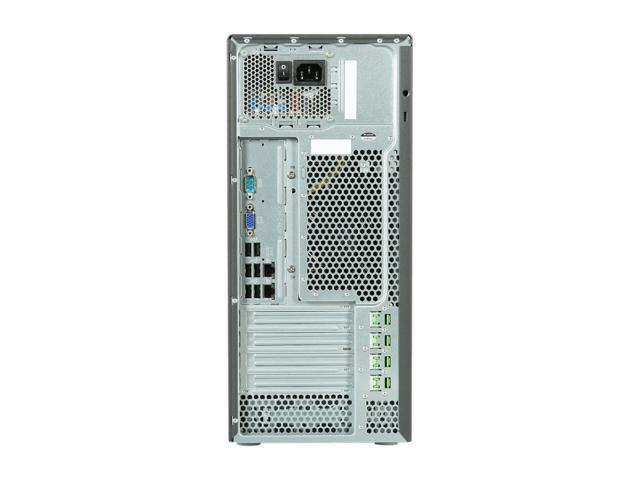 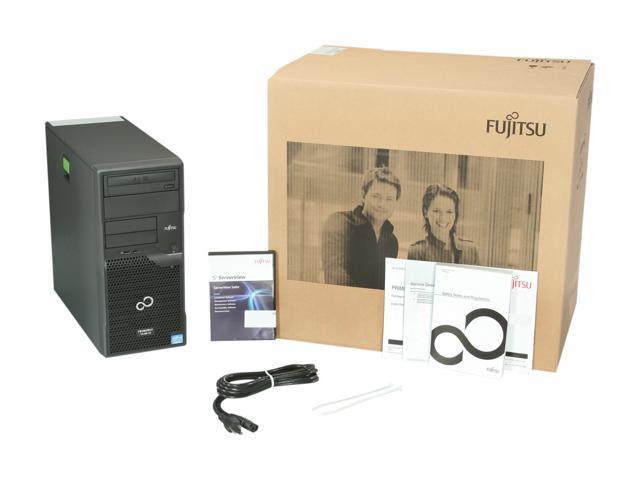 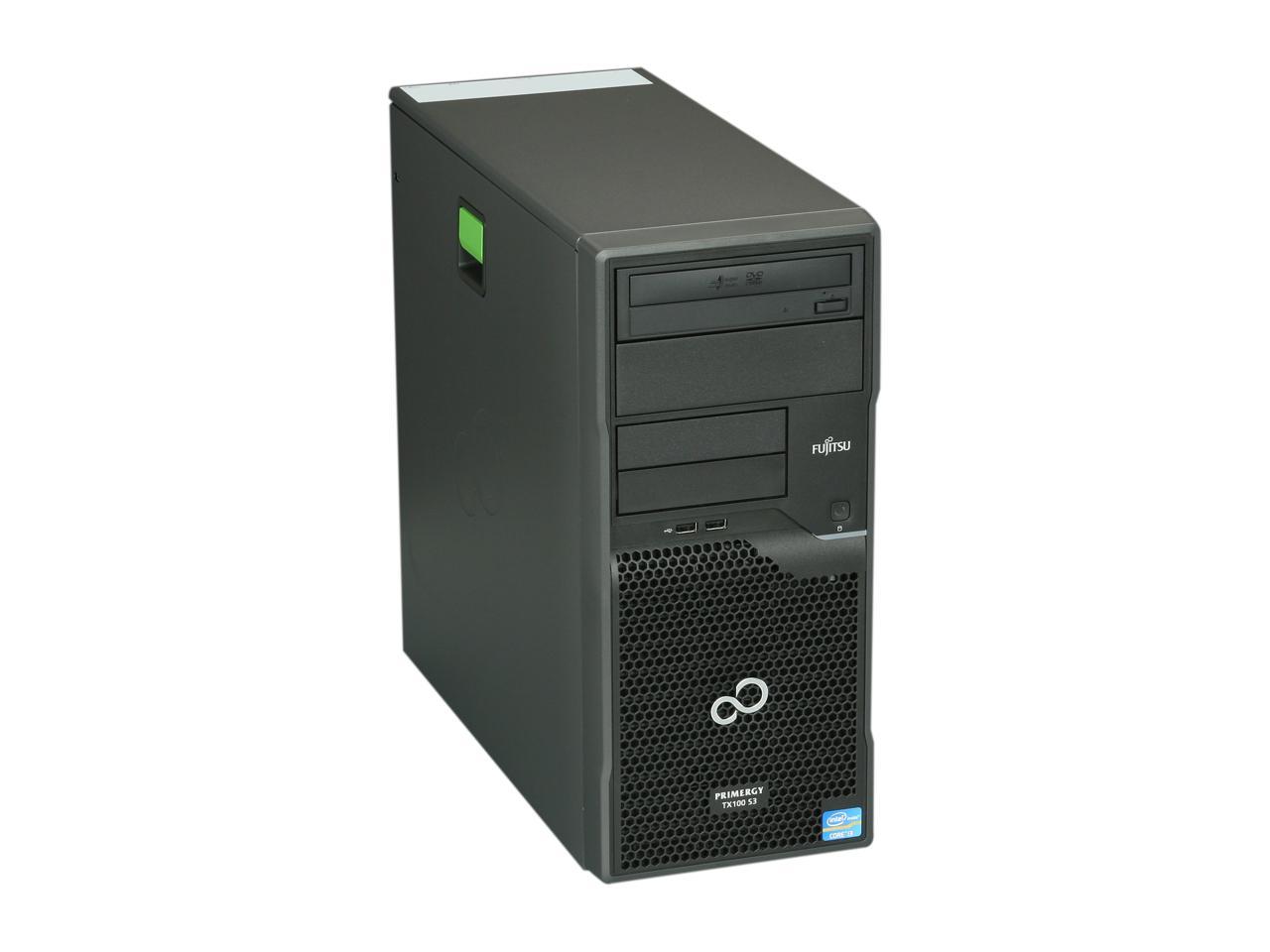 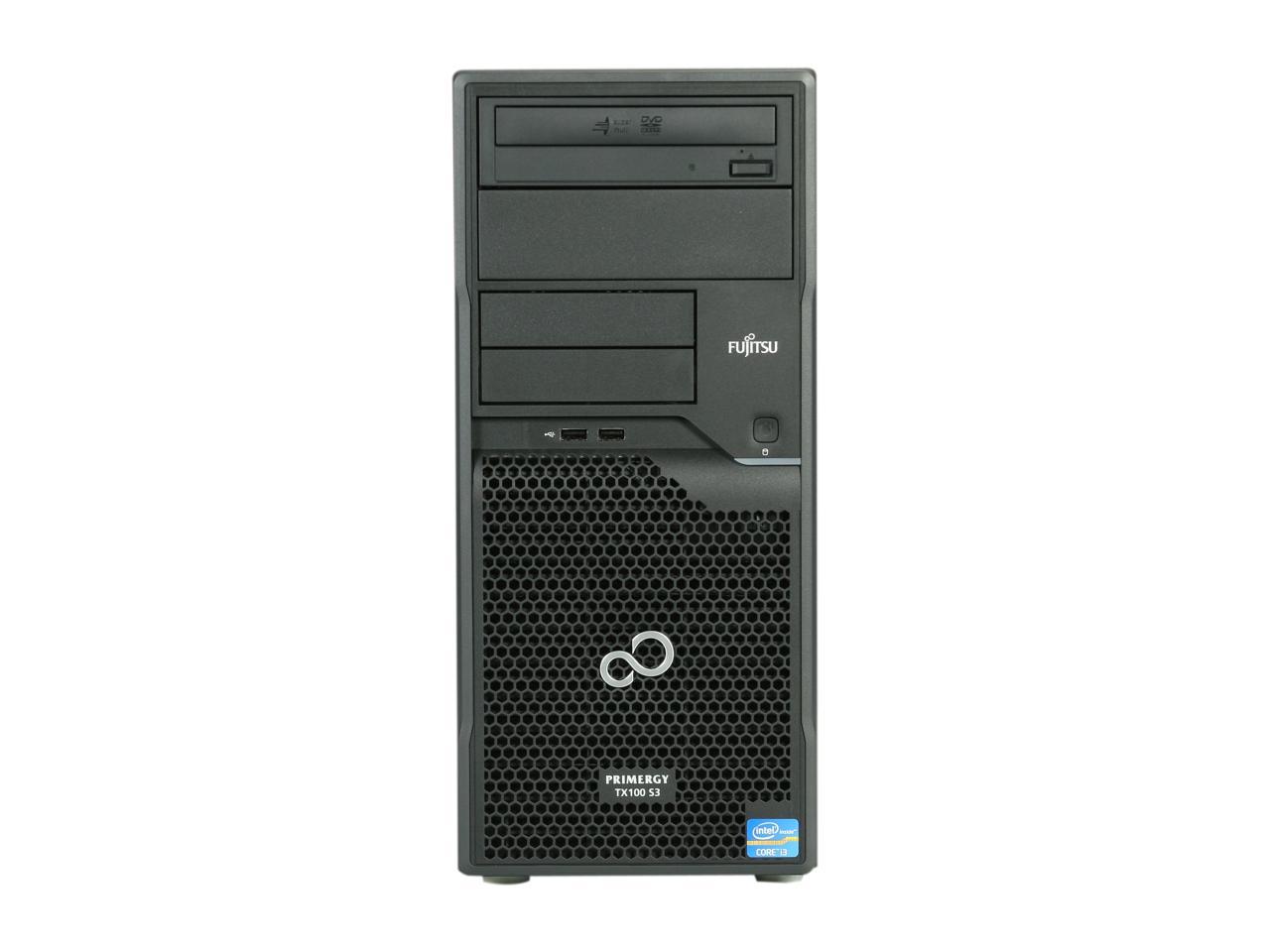 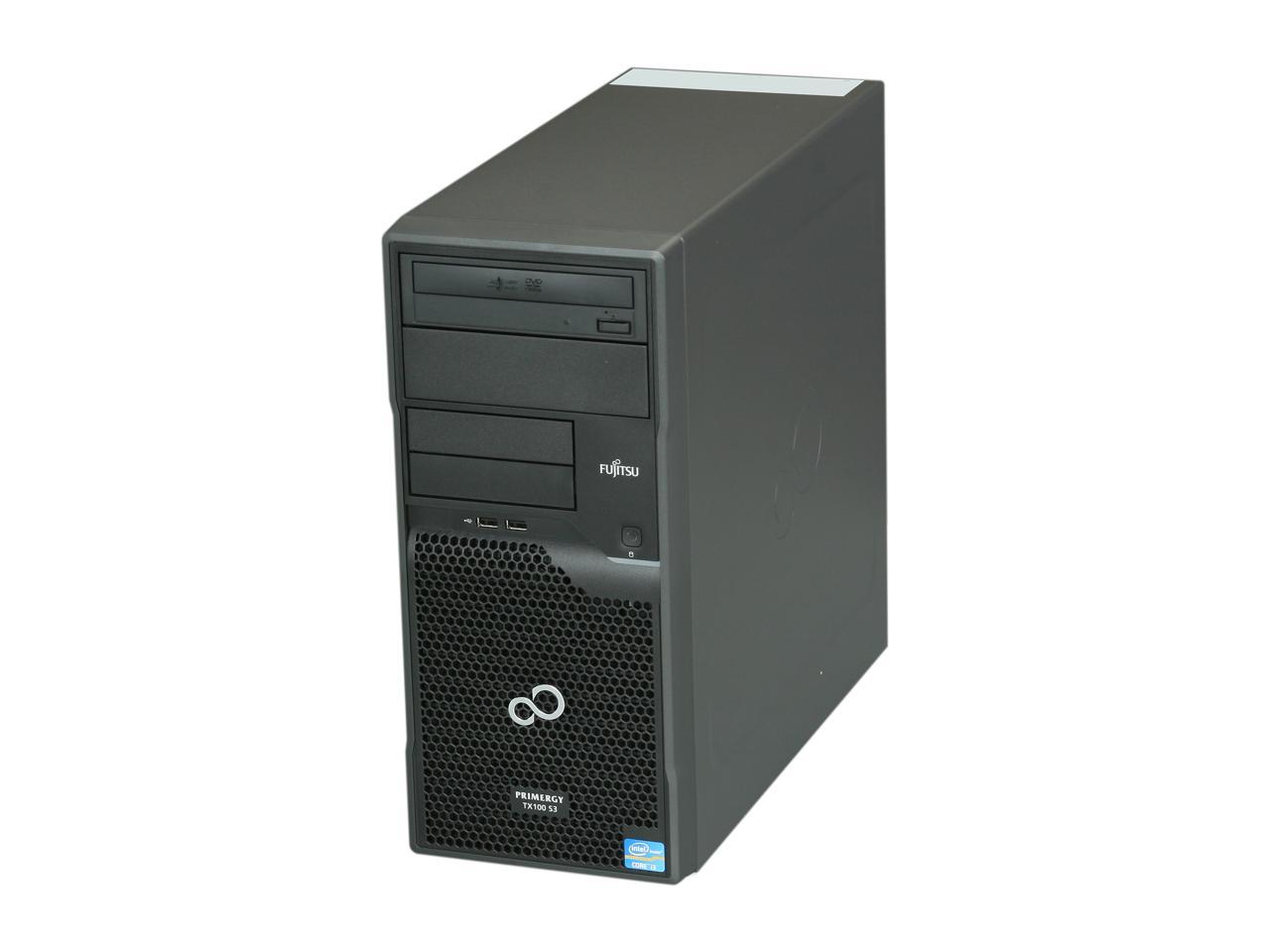 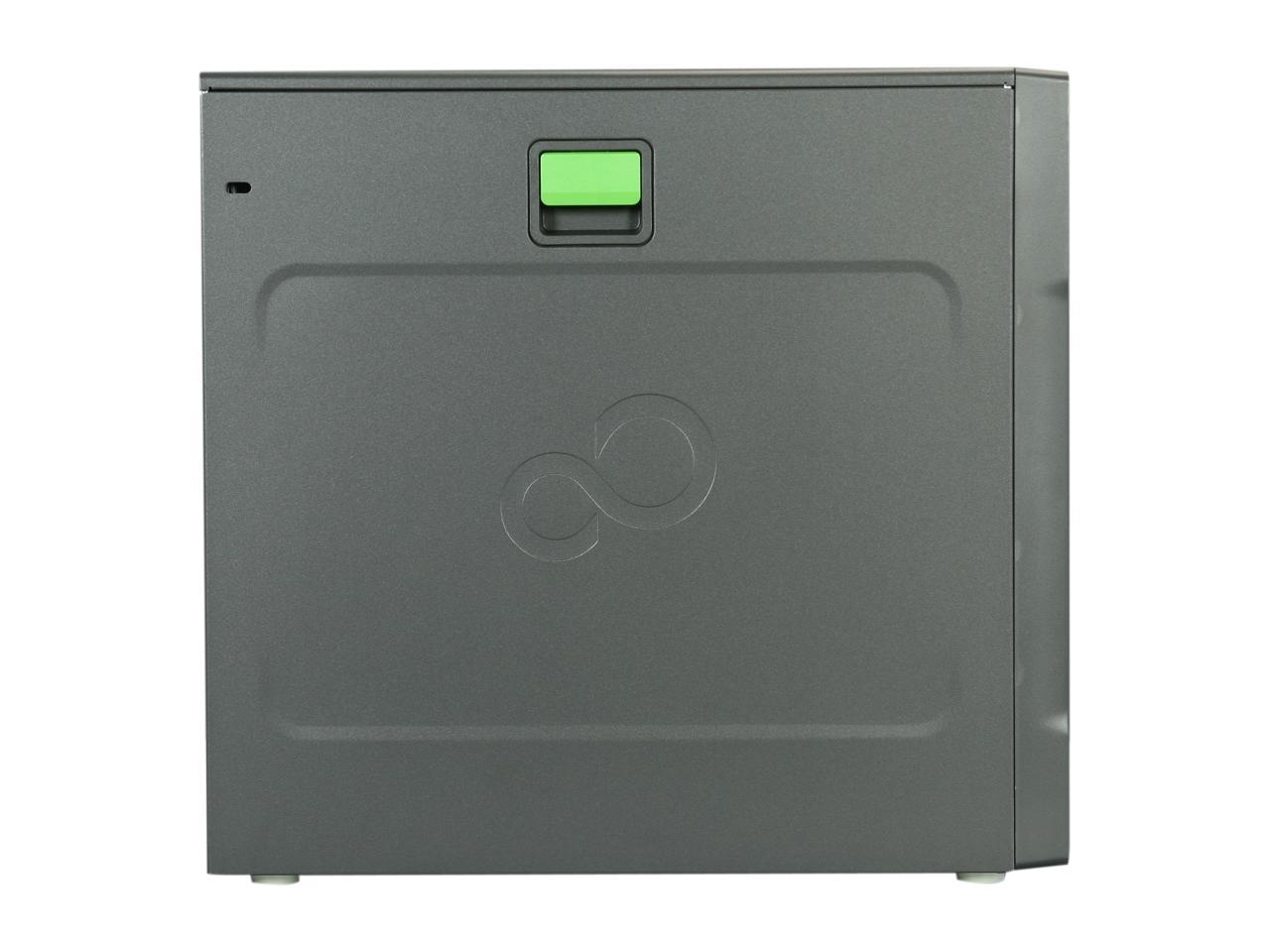 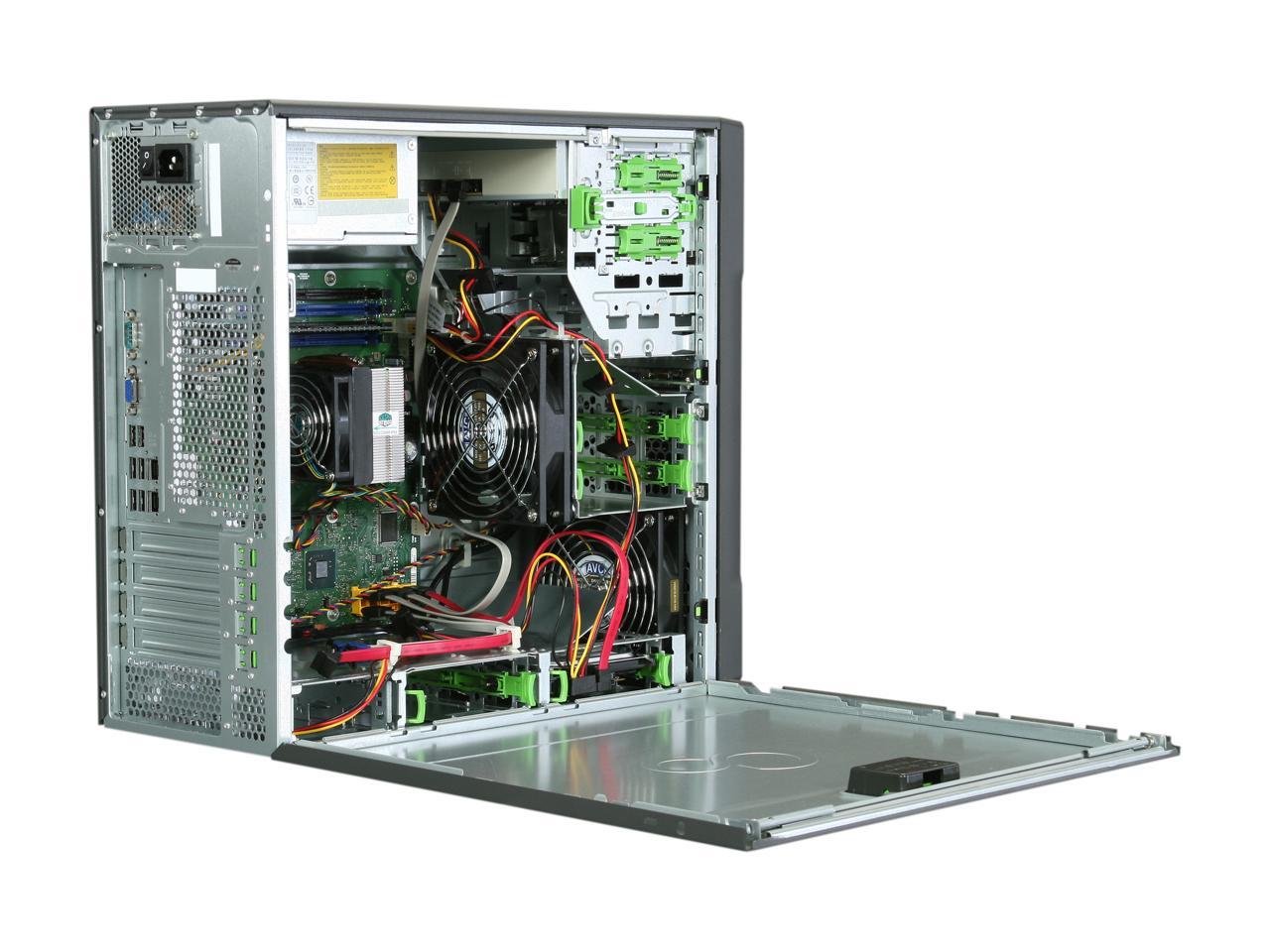 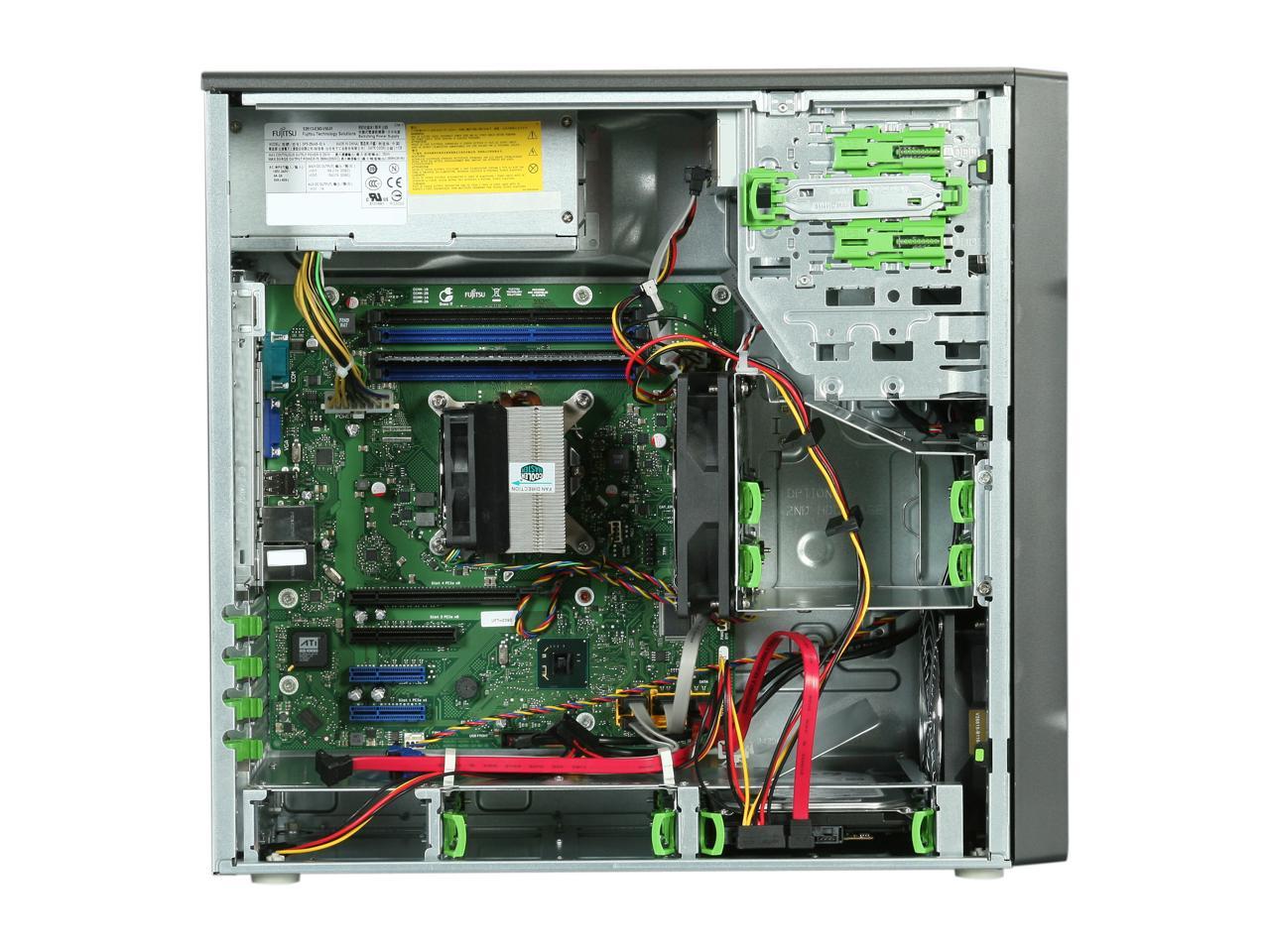 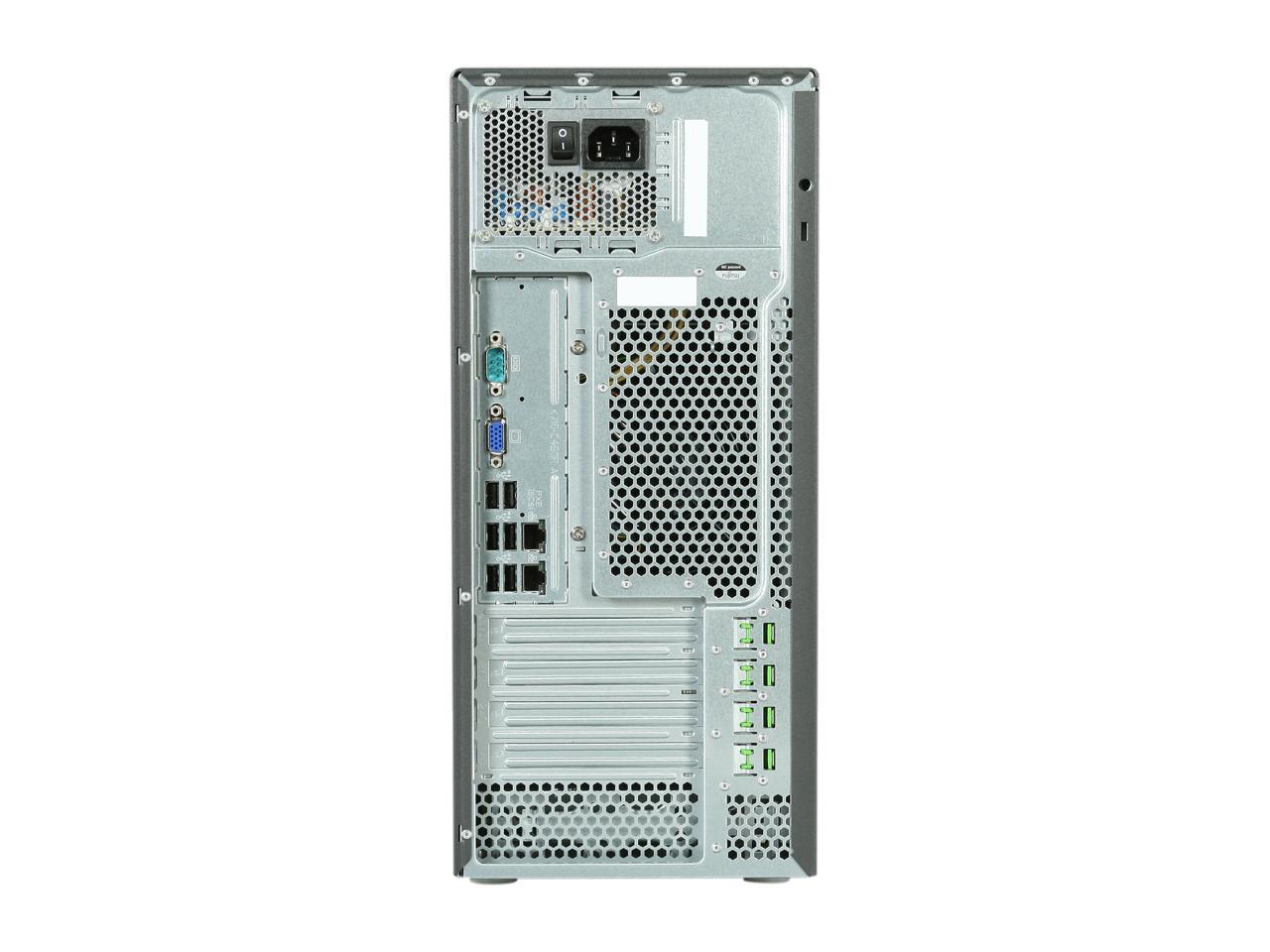 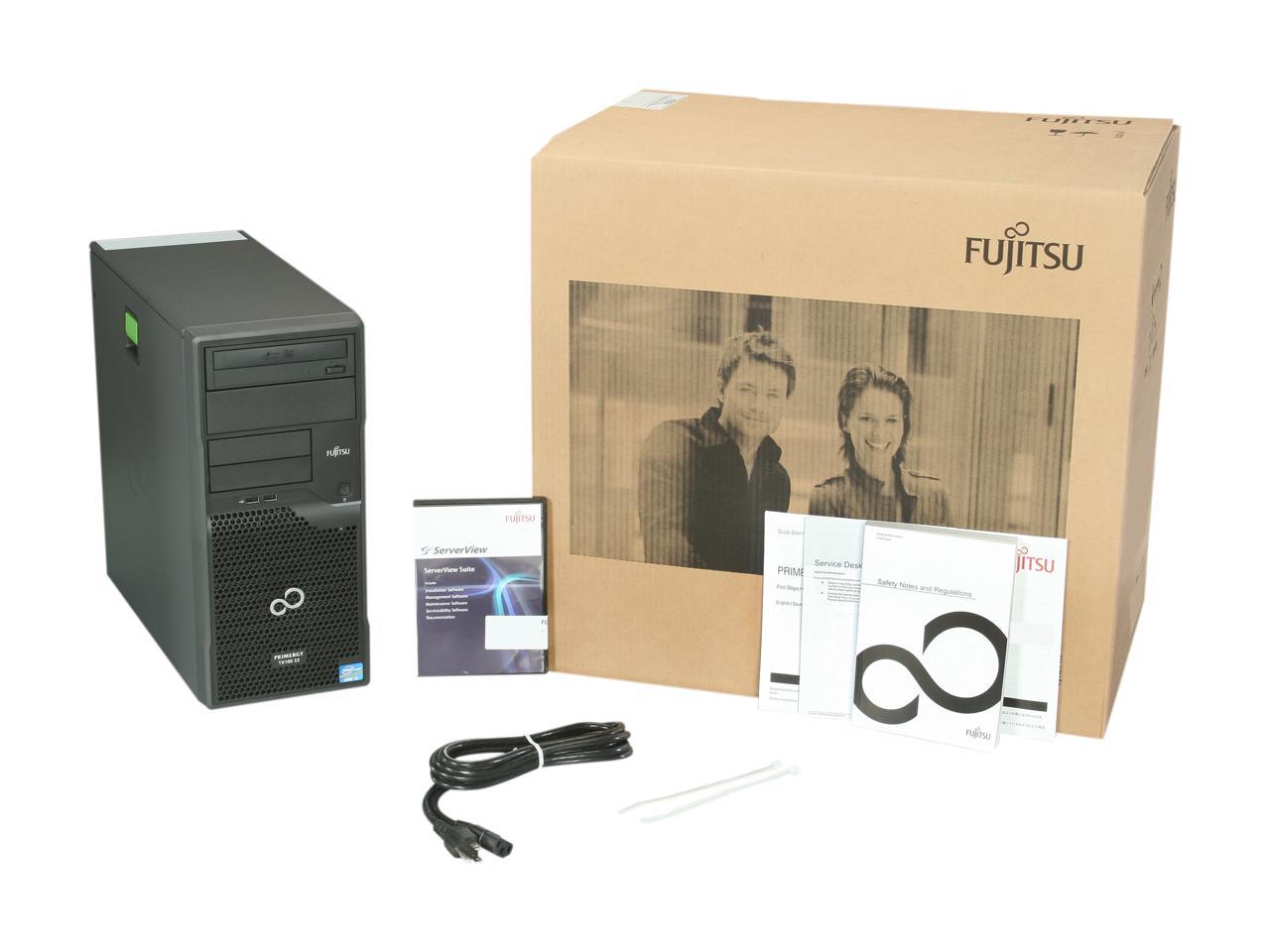 The PRIMERGY TX100 S3 is ideal for SMEs, looking for a first server with Intel Xeon support. With a maximum of 32GB of RAM, and excellent processor performance, it offers more than enough performance for all classic server tasks, such as file, print, web or office applications. The dual onboard gigabit LAN, makes it easier to do business 24x7. Moreover, the TX100 S3 is incredibly silent making it an excellent choice for any office environment. With its optional zero Watt functionality and a choice of two highly efficient power supply units, the TX100 S3 minimizes costs and the environmental impact.

Learn more about the Fujitsu VFY:T1003SX010US

Pros: It's effin quiet. If I weren't watching the boot screen or didn't notice the green power light I would have assumed it was off! It's fairly easy to get into the case and add/remove devices. I have rails to use all four slots included. The i3 is VT enabled for baremetal virtulization (ESX, ESXi, OpenNode, HyperV).

Cons: It's not a *con* per say but mine came with a single 4GB stick of ram instead of 2x2GB as described in the details. I'm glad they did this actually as it makes upgrading easier and I won't have any spare ram just sitting around. The specs say 9 usb ports 2 front 6 back 1 internal. The internal is a USB DAT connector for tape drive backup #not# for USB booting :(

Overall Review: The server actually DOES take 32GB of RAM per the fujitsu website (google "fujitsu tx100 s3 ") *awesome* I'm pretty sure this will fit most of my needs currently. I don't need redundant power supplies as this is just a test box. It has a console/COM connection which is nice as some low end servers don't have that (I'm looking at you HP). Overall it's a pretty decent server that will work just fine for me. Maxing out the RAM allows me to easily run an entire lab off this one box.

Pros: Great little server. It's small, quiet, and very easy to work on. It comes with "rails" for 4 drives and they install with zero tools. Works great with Windows Server 2008 R2 and Hyper-V. Max RAM of 32GB.

Cons: I wish it had hardware RAID, but for the price, that's just crazy talk.

Pros: Small. Nearly completely silent. Insanely cool (one CPU core at 39C is the max, even under significant database load). Plenty of room inside. Thoughtfully designed chassis. Decent expandability. Very fast ECC memory. Core i3 is more than sufficient for most tasks. 6 onboard SATA headers. RAID and plenty of options built in to the BIOS.

Cons: Limited to 16 GB of memory. Only two sets of driverails included despite cage accommodating four drives. Only a single GbE NIC. No USB3. Slot options are a bit confusing (even though you have everything you probably need). Native video is pretty poor by today's standards. Driver disc was a bit obtuse and Fujitsu's website craps out >50% of the time when you try and download drivers.

Overall Review: If you're putting a video card in, it has to go in Slot 4 (the blue slot). Even though most PCIe cards are x16, the card itself *will* fit into the slot. It'll just use the first x4 lanes or whatever. A cheapo passive-cooled $20 card took my Windows Experience Index from 1.0 to 3.9 Aero / 5.9 gaming. I installed an SSD, USB3 HBA, and extra 8GB of memory, and this thing screams as a database server. For the money, this is as solid and dependable a server as you can build, especially if you get it as part of a sale or combo deal. I'm running Win7 on it using mainly the WS2008R2 drivers and between the OOB driver disc and Windows Update, everything is running smoothly and great.

Cons: cannot get WHS 2011 (which was bundled) to install. It simply won't recognize the drive. Trying everything I can do to get support on this. I've downloaded every driver on the fujitsu site even remotely associated with this machine and nothing works

Pros: I got this server on sale for $299. This system is far more capable than any Atom server or AMD box at that price. The i3 is more that enough for most needs. The server exceeded my expectations. I'd buy another tomorrow if they come back in stock and go on sale. iSCSI booting from the onboard NIC is a nice bonus.

Cons: I managed to get my system to hang by changing my BIOS to use UEFI boot while the iSCSI boot feature was enabled. This renedered the system unusable until I upgraded to version 1.8 which addresses this bug.

Overall Review: I almost bought two, I wish I had. I plan on running Hyper-V 3.0 with Vyatta, Server 8 and CentOS runnnig as guests.

Pros: Quiet. Price. CPU. Spacious on the inside. 4GB RAM. DVD. Dual NICs! ESXi 5 installed onto 1GB USB easily. Plugged in one NIC and it got an IP fine. Installed Win7 and WHS 2011 as VM's with the 4GB included. Gave 1GB to the Win7 VM and 2GB to the WHS VM. Probably will need more memory if I'm to put this into production. But to just things up and running, I had the resources to see for my own eyes whether this would work.

Cons: Spacious on the inside, but I was comparing to the microserver, so it's big on the outside. I want it all. Documentation says it supports RAID 5 with BBU, but the only part # for a Fujitsu BBU comes in at over $200. So, I hunted down a PERC card with cables and accessories for around $75. Haven't received it yet - so I don't know how that's going to work out. I'm curious to see what happens with the 250GB drive I installed my test VM's on...if I can hook it up to the PERC and will it fly. Biggest Con to date is that I wanted to put a Hauppauge TV card into the unit and pass it through to the Windows 7 VM and have a single box record OTA shows and move them to the WHS. That way, I could have only one physical box running. However, when I go into the bios, VT-d is disabled and, as far as I can tell, cannot be set to enabled. The manual merely says, that this is where you enable / disable. The Intel page says the Core i3 doesn't support VT-d.

Overall Review: I suppose I can purchase a Silicondust Tuner to resolve the TV recording issue. But they aren't free. This was a Shell Shocker deal and pretty good, but am feeling a little buyers remorse because the HP Microserver was a Shell Shocker 1 or 2 days later - with a "free" 2GB hard drive whereas this came with a "free" copy of WHS. However, I think this server will be quieter and easier to work with than the HP. But on the other hand, once you're done with it, do you really have to go back in all that often? Now, everything is back to full price and out of stock so if I return it, I'd have to wait. Not to mention that all of the hard drives are still 1 1/2 to 2 times the price they were a year ago before the infamous floods. So, I still need to buy 4 2TB hard drives and do a RAID 5 on them. This will ultimately replace an EX470 with 2GB RAM and dual core upgrade. I wanted to go Hardware RAID rather than fake RAID - especially since I wanted to go the virtualization route.

Cons: Does not ship in a configuration that will permit installation of the (possibly) bundled OS

Overall Review: If you buy this from NewEgg in a bundle with Windows Home Server 2011 (Server 2008 R2 under the cover), the server does NOT ship in a configuration that permits installation of that operating system. You have to invoke the system BIOS (press F2 repeatedly while it is booting) and disable the onboard RAID subsystem. If you don't do this, Windows Home Server will fail to recognize the drive in the system, even if it is properly configured within the underlying RAID subsystem.

Pros: The same pro's as below. Very well designed. Sticker on top says made in Germany. I can tell.

Cons: The only con that I see so far is the power supply. It is proprietary and has unique plugs on the motherboard the way it moves power from one plug to another output plug that powers all the drives. The only thing that scares me when it goes out where do I get another and how much will it cost. Besides that it is a perfect design.