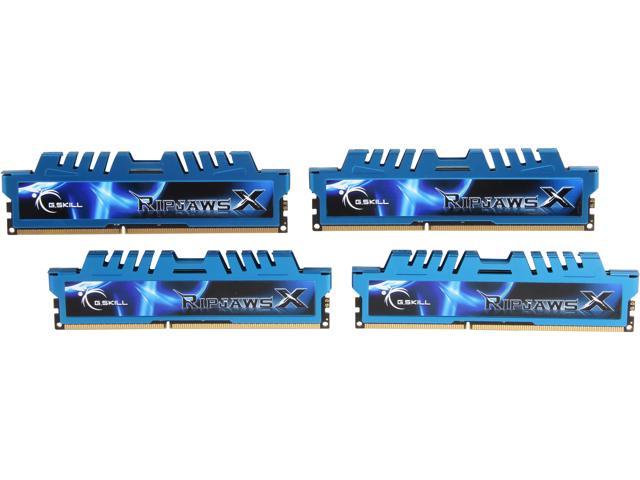 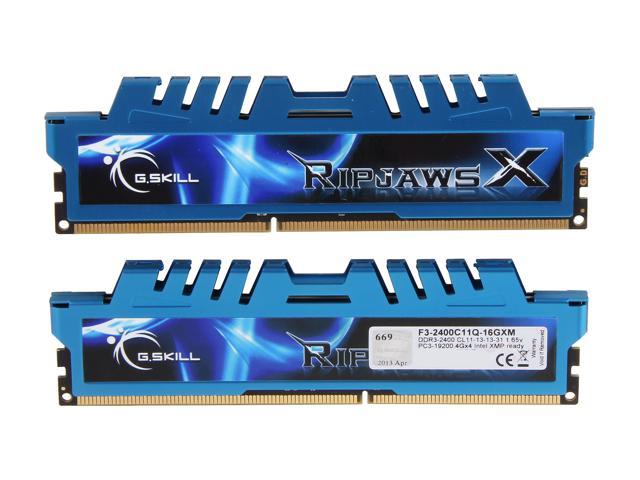 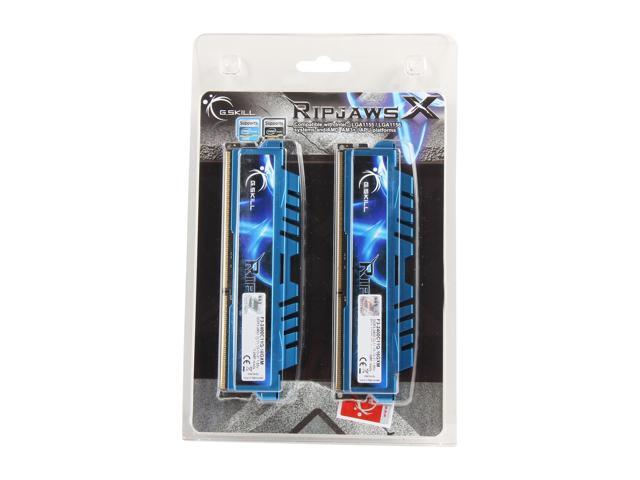 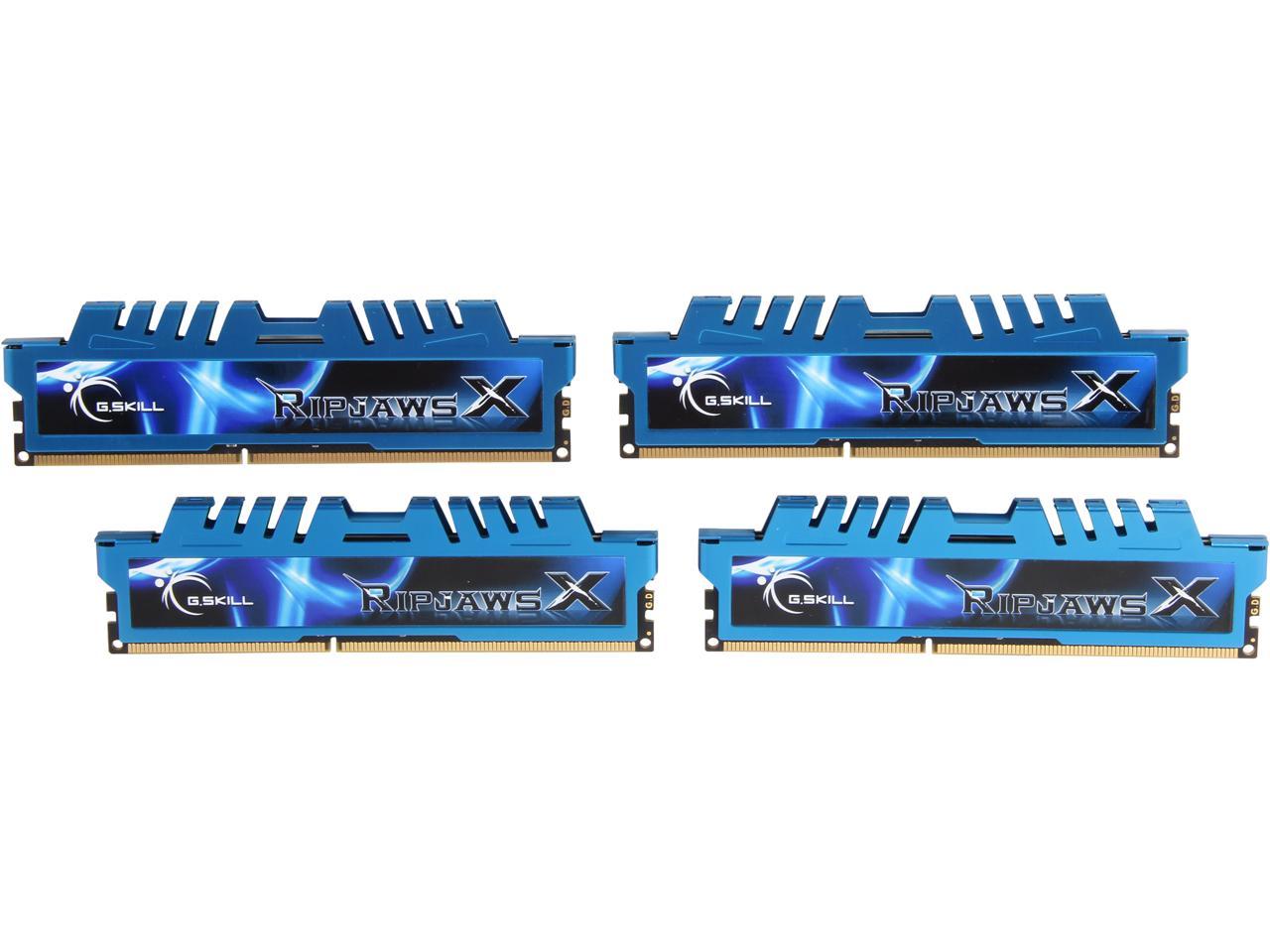 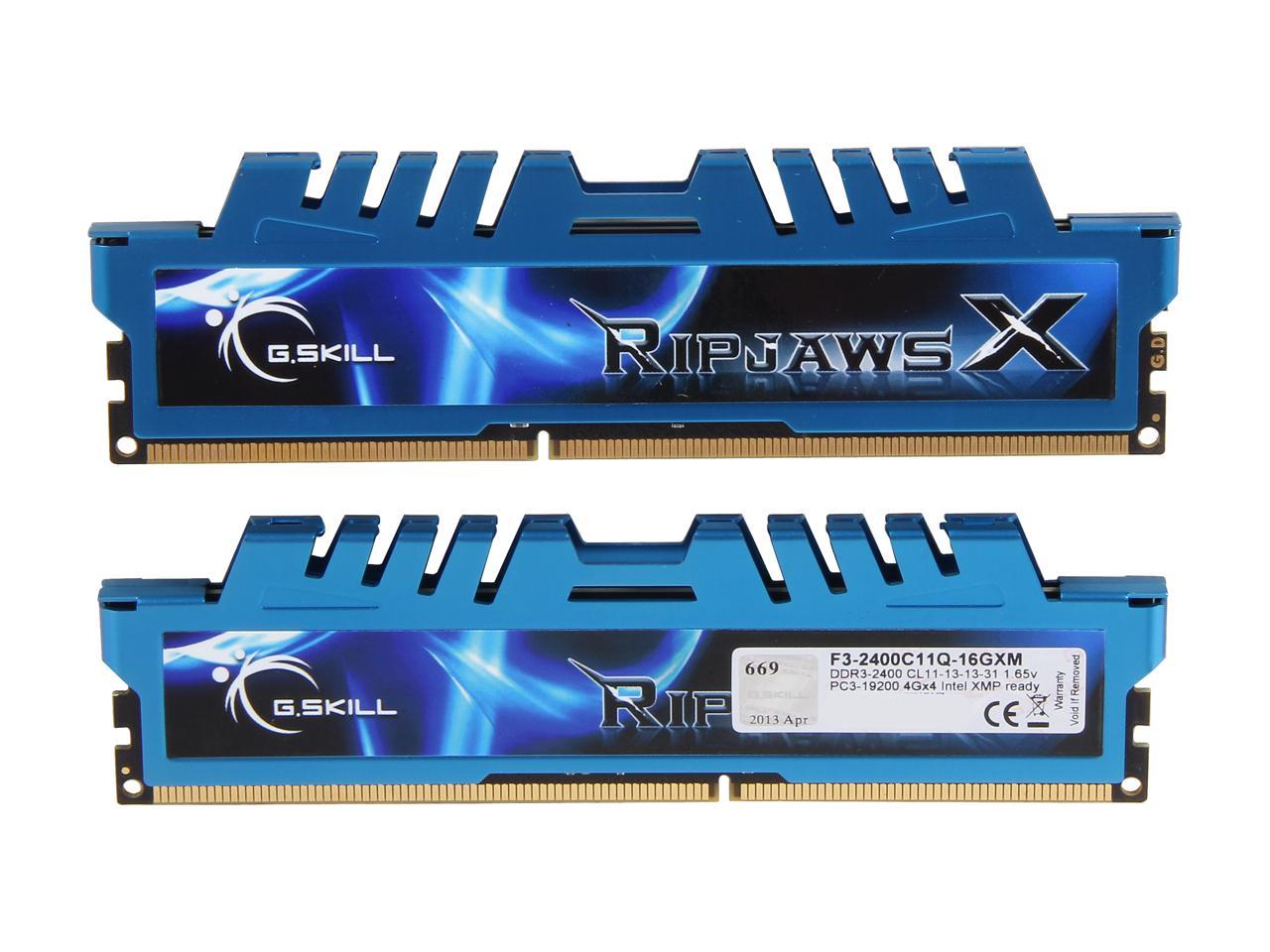 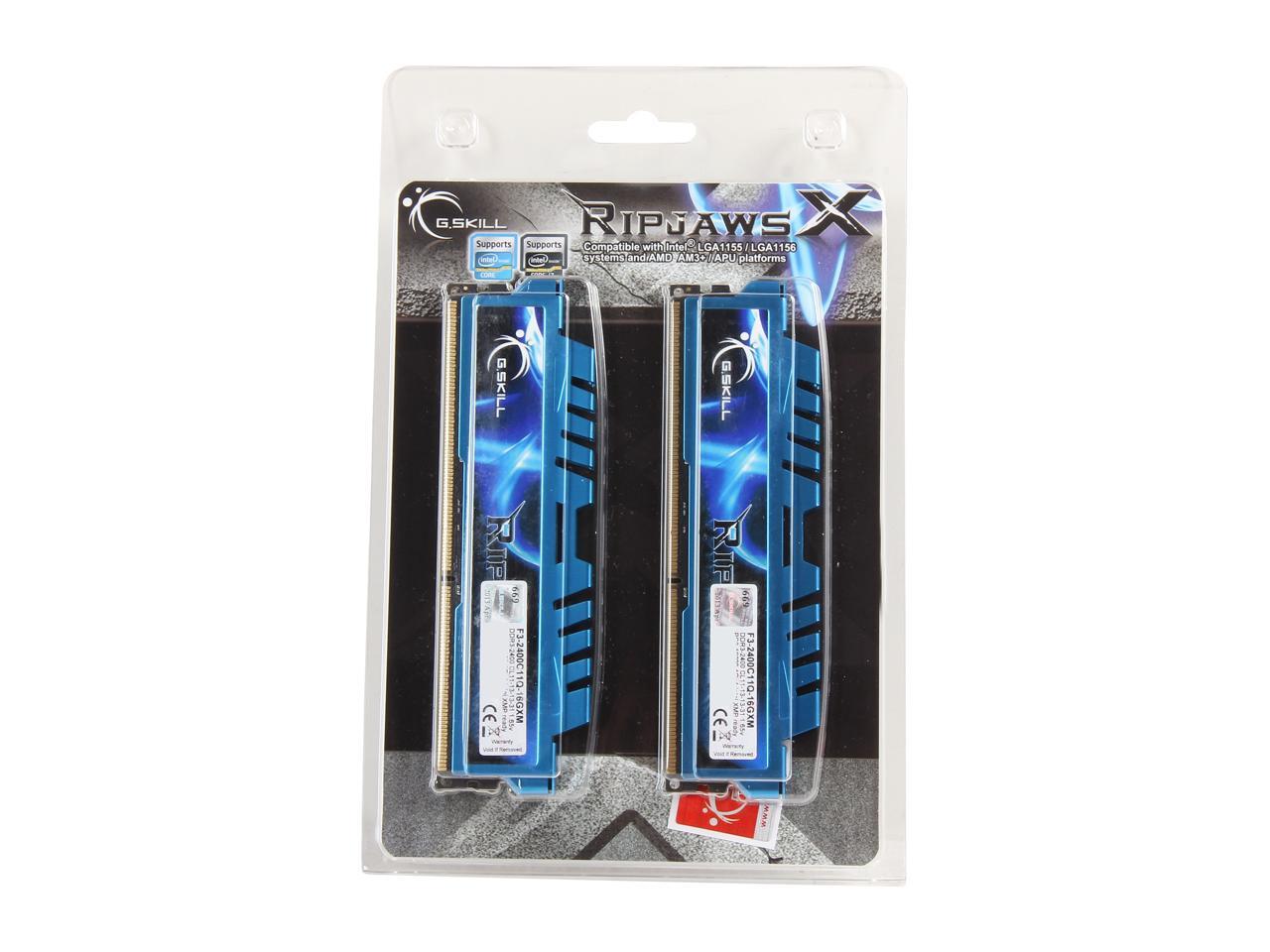 Optimized for speed, low latency, and high stability, Ripjaws X Series memory is the perfect solution for a more responsive system. Consider purchasing this Ripjaws X Series 16GB memory kit if you are upgrading your existing system; you’ll see an extraordinary boost in your PC’s performance and bandwidth.

Each Ripjaws X Series DIMM comes with an impressive heat spreader. These DIMMs also operate at a cool 1.65V for better internal temperature and compatibility.

Pros: Fast Stable Blue "heatsinks" actually look pretty nice in person. Simply works once you set it up properly within your motherboard settings. Downclocks well too and at slower speeds it runs at 1.50v stably. Highly recommended for AMD's unlocked Richland APUs for best gaming performance.

Cons: The "heatsinks" are unnecessarily large. "Higher end" versions have the option to remove the extra, and largely useless "spikes" so you can have the utmost compatibility with CPU heatsinks and other cooling options. It would be nice if that was present here. Timings are on the slower side but that's the price you pay to get these at a good value. Runs at 1.65 V at DDR3-2400 but that's more of a reality than con, but it's important to make sure your motherboard can handle that.

Overall Review: Here's the thing with most CPUs/APUs and DDR3-2400 speeds... You need to overclock in order to get those speeds, and even 2133 speeds. So, if you're running into stability issues it's 90% likely it has nothing to do with this RAM but rather your cooling setup for your CPU or your CPU itself or the motherboard settings. AMD's horrible stock cooler, for instance, could not keep up with cooling the APU at these speeds. I had no issue using this ram with a 6800k APU. Though, the APU did run a little warmer using it, because again, you're OVERCLOCKING to get that speed. The 5 series APUs don't support even 2133 speeds officially, going only up to 1866. The 6 series only supports 2133 speeds officially, but most 6 series unlocked APUs will run just fine at 2400. Intel's officially supported max speed is 1600. So again, it's not this RAM's fault but almost certainly it's your setup (CPU, Motherboard, Temps, etc.). Be absolutely certain that your motherboard can handle this memory, that you have the motherboard settings and timings correct and that your CPU can actually handle it.

3 out of 3 people found this review helpful. Did you?
joshua c.
Ownership: 1 day to 1 week

Pros: I have bought a lot of gskill ram and I have never had a bad module. I bought this for my girlfriend and I dropped it in it automatically set it's self to 2400 MHz 11-13-13-31 timing's....it was an awesome set of module's definetly worth the money and cheaply priced for 8 gb 2400 MHz ram

Pros: The RAM IC's are double sided Hynix CFR. This is quite an exception, as most cheaper Hynix are single sided (kinda like Dual channel vs single channel, but on the same stick of RAM) and thus perform poorly (about 400mhz worse vs double sided). You can easily hit 3ghz RAM on these sticks ( http://valid.canardpc.com/2871027 ) without even trying, although best 24/7 performance is going to be around 2600-2800mhz. I'm sure you could validate 3.2ghz if you tried. Be aware that RAM overclocking definitely makes a difference, you just need the right RAM IC. If you are smart, like buying this kit, which is basically the same price as the cheapest RAM ($56 after coupon at time of purchase), a 1ghz overclock of 1600 to 2600mhz will make a huge, noticeable, 5+ fps performance boost. Going from 1600 to 1866 won't make much of a difference, but this RAM, or any PSC, BBSE, Hynix, or Samsung ram overclocked over 1ghz, will. That's literally a larger difference than going from DDR2 to DDR3 (which makes sense, as DDR4 will be ~2133+ on launch). I'm currently running this RAM at 2666mhz CL11-14-13-27-105-1T for 24hours p95 stable. Setting WRRD_dr and dd to 1 with WRRD to 18 gave a huge copy speed boost (+2000mb/s). Copy/Read/Write/Latency speeds in Maxxmem of 33/25/27/44ns! I've also confirmed with Gskill that all kits are Hynix CFR, so you won't have the issue of some kits being a different IC. Note, what I mean by 'Hynix RAM IC' refers to the internals. Basically, there are only ~6 types of RAM, and a few subtypes. Which means all the hundreds of RAM kits, they all are one of these ~6 different types of RAM. This kit, happens to be one of the very coveted Hynix CFR kits, which you tend to see for extremely high prices, and is great for 24/7 overclocking. It's not as good as single-sided Hynix for reaching insanely high validations of 3ghz+, but it's the best for high 24/7 overclocks. As far as I know, this is the only Hynix CFR kit below ~$120. This is really the best RAM you'll find south of the $99 Gskill Trident Samsungs HCH9s (which are sometimes sold with HYK0s, the generic samsungs that are good but not great) and is 4GB density. PSC and BBSE will give it a run for it's money, but are out of date (gotta buy them used) and won't hit such high speeds without luck.

Cons: Doesn't tighten as well, so you need Haswell or golden IMC Ivy to make this kit shine.

Overall Review: You really need a Haswell chip to use this RAM. Even Ivy Bridge's IMC usually tops out around 2200mhz @ 8GB, and since Hynix doesn't tighten very well, you are better off with some PSC/BBSE from yesteryear (still some of the best 24/7 and benching RAM, definitely better than this RAM when binned well) and going with ~2200-2400 CL8 as opposed to the ~2800 CL12 of this kit. Even Haswell's IMC is going to be tested by this kit, as most Haswell's will not do 24/7 stable on 2800mhz. Ivy Bridge rarely can do 3ghz for validation and will likely not even be able to do 2400mhz stable 24/7, so unless you know your Ivy has a very strong IMC, you are better off going with PSC/BBSE than this kit. Sandy Bridge or AMD definitely should rather use PSC/BBSE than this kit.

Pros: The Ripjaws X were on sale and I picked this version because I liked the overclocked 2400 Mhz memory. When I first installed it, the bios had it at 1600 Mhz but I just used the XMP setting and in one click and a reboot it changed over to 2400 Mhz. It’s tall RAM but it fit even underneath my huge cooler.

Pros: Initial impression: look even better in person -on the back of the casing it states "lifetime warranty" -2400 speed for this price?!, XMP ready -heatspreaders are top notch -black PCB -Gskill <3, comes with a nice sticker for your case

Pros: I bought G. Skill because my staple memory brand is nearly 50 dollars more for the same speed, CL. If I want more, I'd have to pay twice that (which is ridiculous). For current memory, my favorite brand is way overpriced. Anyway I bought this for a game computer. I'm, 64 and I need every advantage I can get on kids 13 and older in Battlefield 3 and CoD. So far, I've improved in cowboy draws and grenade tosses in foot stomping situations. I have tried flying, so that's next. It's fast. I haven't overclocked my computer, yet.

Cons: None as of yet. They all fired up perfectly when I seated them into the Dim slots.

Overall Review: Being around electronics for most of life, for brand new components it's usually two weeks required for burn in time. If it doesn't stop or putter to it's death, it'll be fine. I almost through it.. . so here's to good things.

Cons: One of the sticks was DOA.

Overall Review: Doing RMA. We will see how it goes.

2 out of 2 people found this review helpful. Did you?
Manufacturer Response:
. Dear Customer We will be glad to help with this issue. All G.Skill memory kits are backed by a manufacturer lifetime warranty. At any time a module is not working properly or performing up to specification, we would be more than glad to replace it with ones that will. With G.Skill, the rated specification is exactly what you are guaranteed. If you have trouble reaching it, or the modules do not perform the same, simply let us know and we will be glad to help. The G.Skill support team will make sure you get exactly what you purchased. For a extreme frequency like DDR3-2400, not every CPU and motherboard can support it, but the support team can still help set it up for maximum performance. Visit the G.Skill website for complete RMA procedure. Once you receive the new RAM and set up BIOS, this memory kit should perform extremely well. Thank you GSKILL SUPPORT Quality and customer service are our top priorities. Tech Support Email: ustech@gskillusa.com RMA Dept Email: rma@gskillusa.com G.Skill Forum: http://www.gskill.us/forum/

Cons: XMP required. To use this (at 2400) with my i7 4790k I have to use XMP or extreme memory profile in BIOS. I seem to be having some stability issues when doing this. As the processor only recognizes DDR 3 1866. I feel like this should be announced in big bold letters on the product page. I did not knock an egg because it comes down to paying attention at the consumer end.