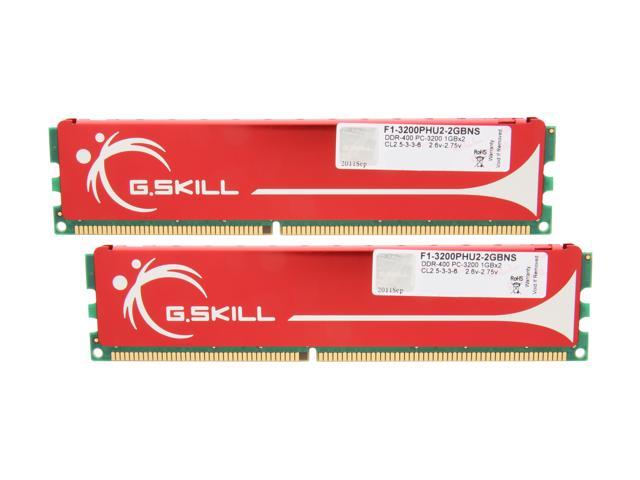 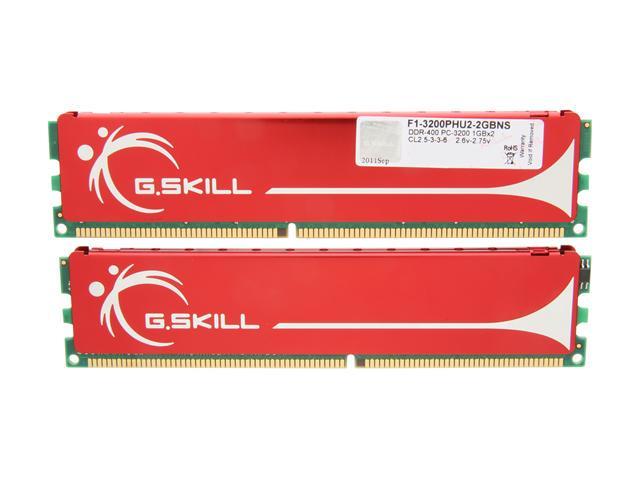 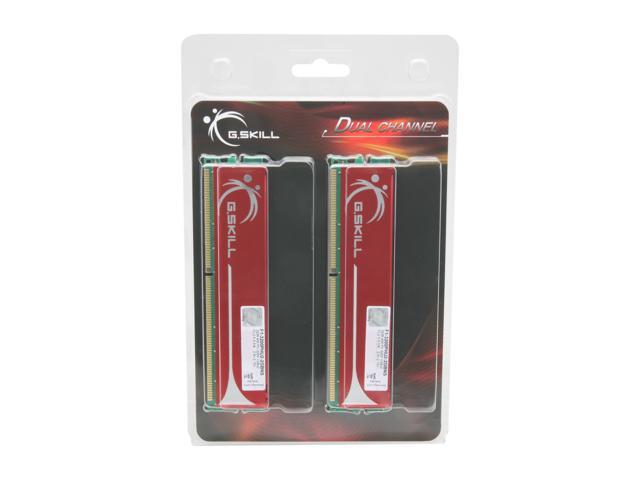 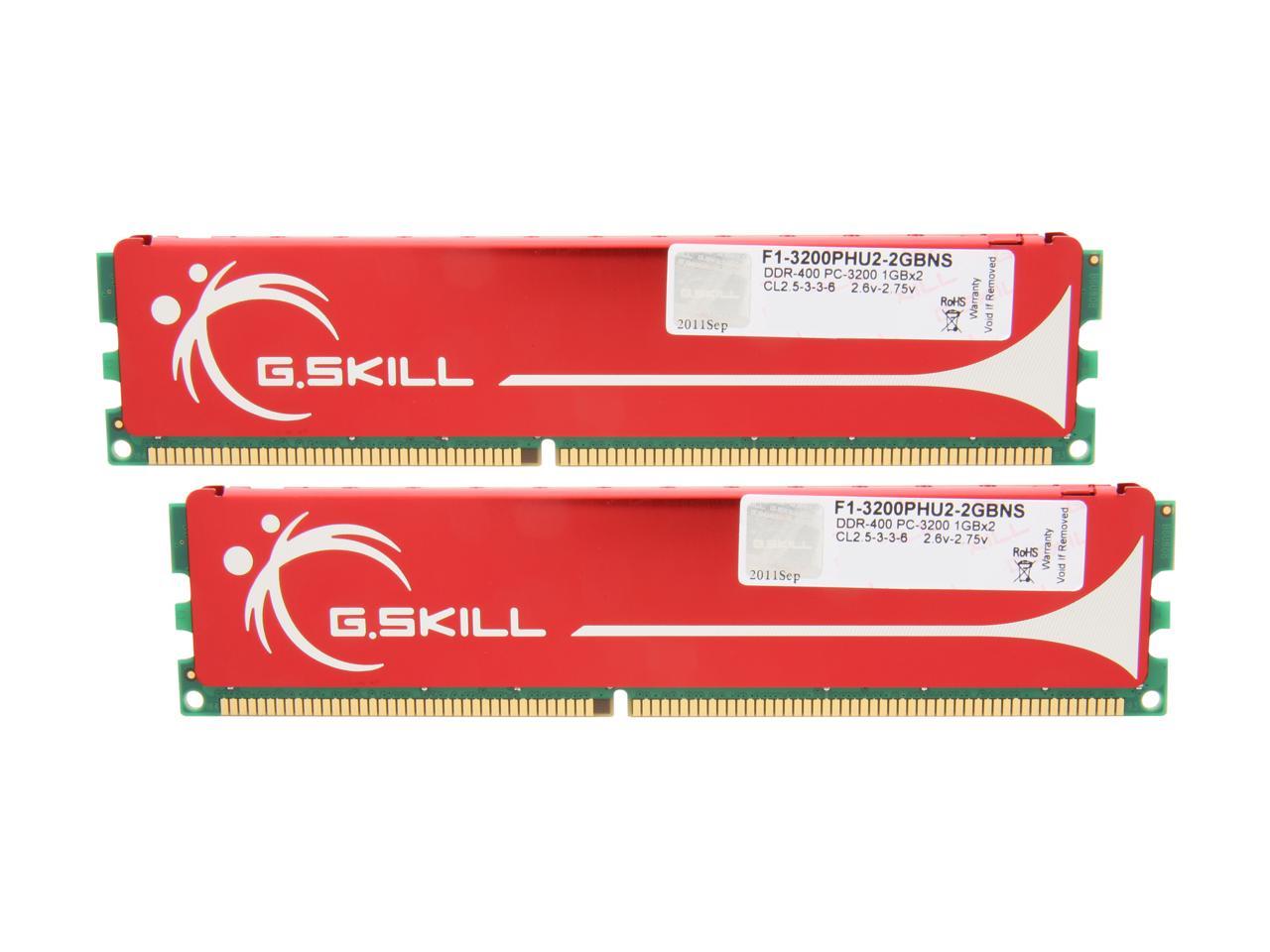 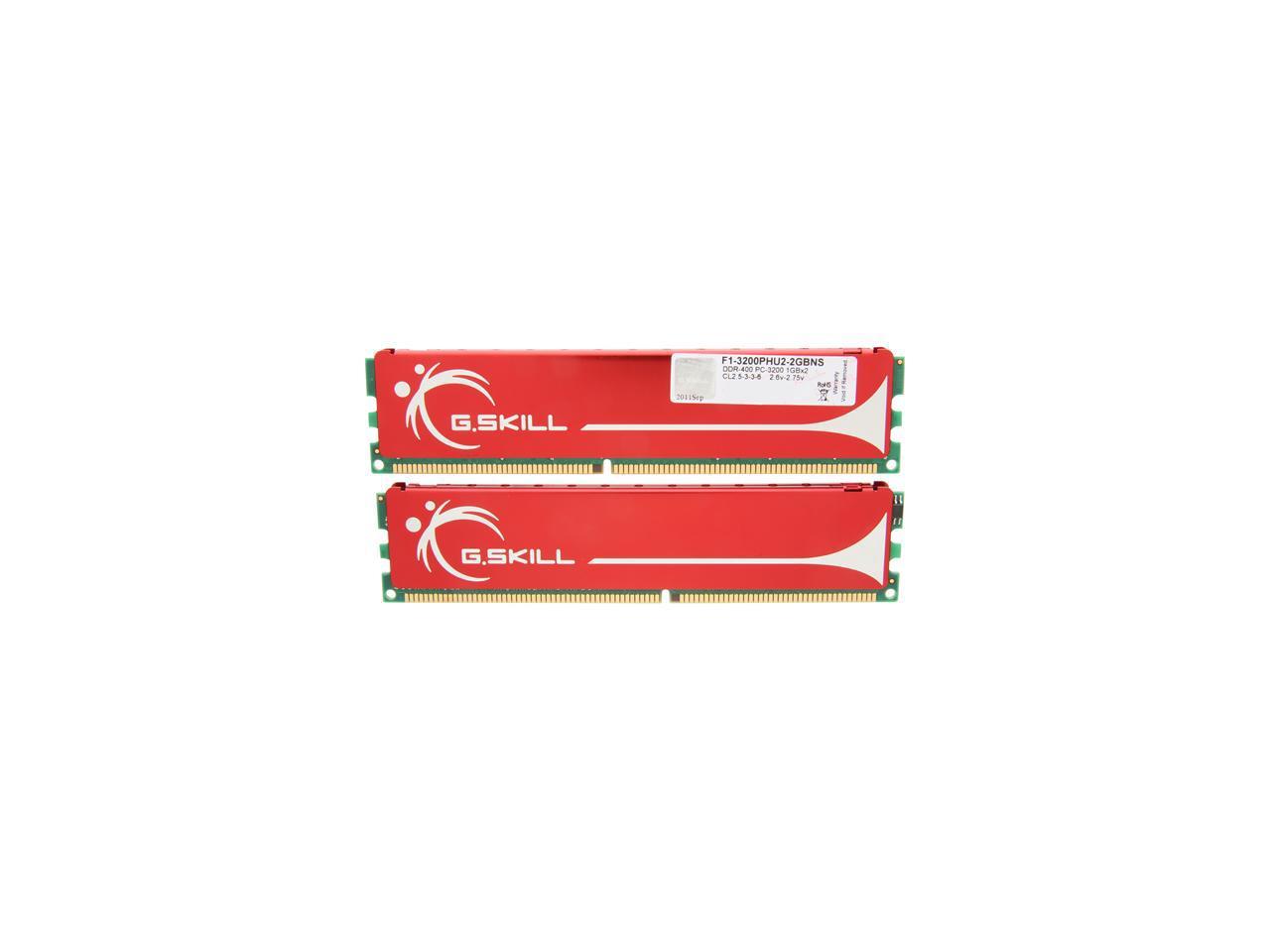 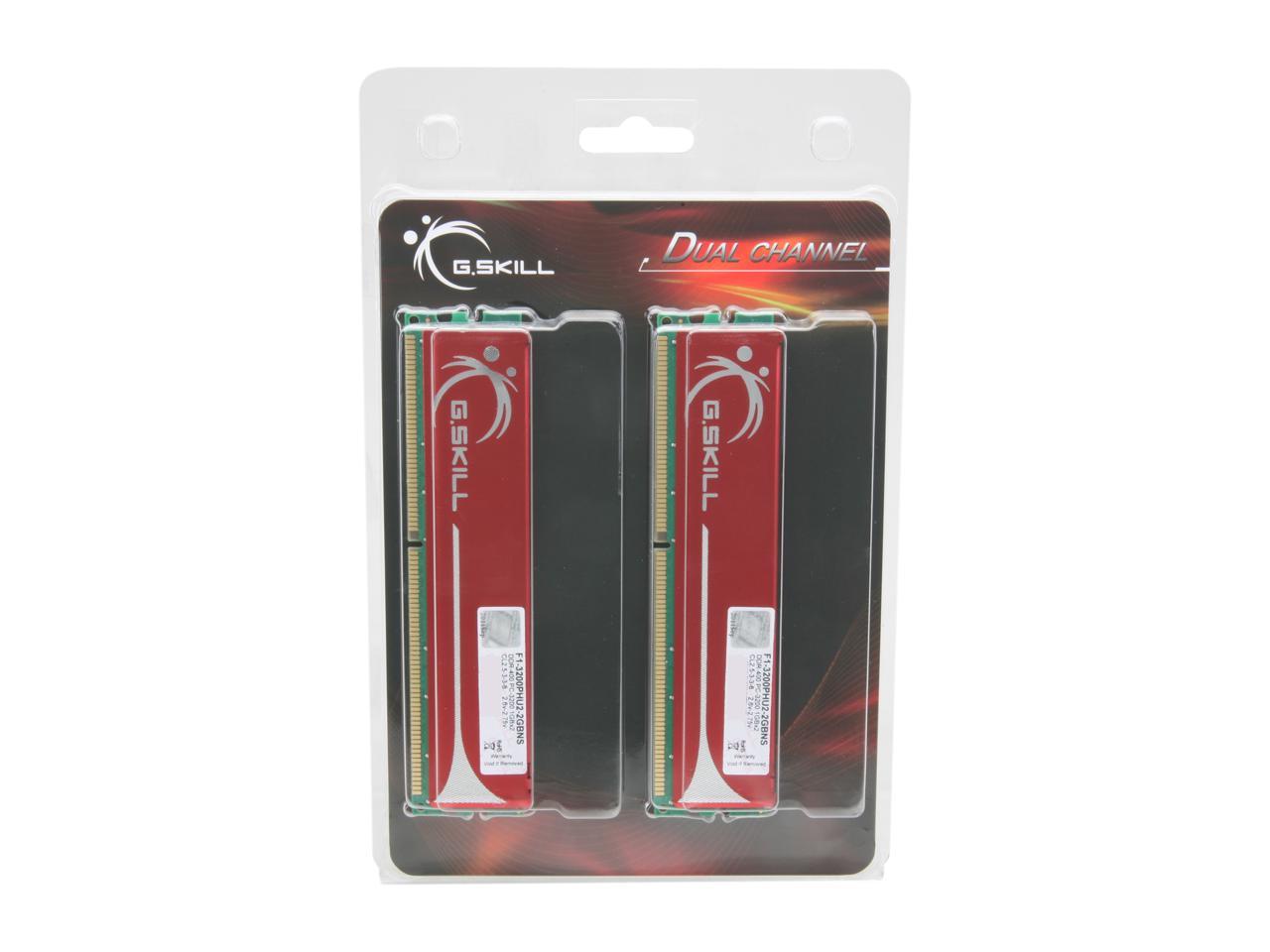 (1,773) Write a Review
OUT OF STOCK.
Overview
Specs
Reviews
Add some more horsepower to your system with the G.Skill 2GB (2 X 1GB) 400MHz DDR SDRAM dual-channel desktop memory kit. These crimson red sticks race at rate of 400 MHz and supply your system with a sizable 2-gig dose of DDR memory. Installation of these memory sticks is a breeze, and you’ll be all set to fly in no time.
A recipient of international awards and prestige, G.Skill thoughtfully crafted heat spreaders into these modules to deflect thermal energy away from their core. If you’re upgrading your existing system, consider the enormous savings of purchasing this 2GB kit instead. You will see an extraordinary boost in your PC’s performance and bandwidth, and still have plenty of change left for stocking up on more hi-tech gear!

Cons: At this price point, none, really.

Pros: After comparing prices with other memory and what Dell offered at twice the price I decided to try this memory. This memory works great and I am happy with my decision to purchase it.

Cons: This memory has a latency of 2.5 CAS. Which is good. I hadn't completly researched whether this memory would be compatable with the existing memory in my Dell 8300 before I purchased it. After I ordered it I read that I may have issiues with the latency being different than the Dell memory latency of CAS 3 and it may cause my computer to drop from 400mhz. to 333mhz. if I install it together which is exactly what it did. I removed the Dell memory and it went back up to 400mhz. so I ordered another matching dual channel 512m.b. pair to replace the Dell dual channel 512m.b. pair I had.

Overall Review: Dimension 8300 systems using DDR PC3200 memory operate with a memory bus speed of 400 Mhz. If you are upgrading your 8300 system with DDR PC3200 memory, only memory with Cas Latency 3 or CL3 rating should be used. DDR PC3200 memory from other manufacturers may work at the rated clock and memory bus speed so long as it is CL 3. Using memory with CL 2.5 or CL 2 may result in the memory bus slowing to 333Mhz If you completely removed the existing Dell ram, then you could install DDR PC3200 CL=2.5 and it would run at 400MHz. However, if you keep the existing Dell ram, then the additional ram must be DDR PC3200 CL=3 in order to get 400MHz speed. Here's the reason. The BIOS looks at the timing tables that are hardcoded into each stick of ram. It then tries to find a common CL rating, and chooses the maximum speed supported by each stick at that CL rating. So with Dell ram having a table that shows: 400MHz @ CL=3 ... 333MHz @ CL=2.5 ... 266MHz @

Pros: Have a 9 year old SOYO P4X400 Dragon Ultra Platinum motherboard that just needed more than the original 1 GIG that was installed way back when. Have finally hit the memory ceiling lately and it was time to add a little. This machine can only run cards max unless you use way slower memory so it wasn't too much problem to go with a 2 gig set. The mother board bios was able to take the memory settings for the G.SKILL set with no problems. I had 1 GIG of Corsair CMX512-3500C2PT installed for the last 9 years and it was fast and solid. Easy to install. Had no problems what so ever!

Overall Review: Almost bought some more Corsair memory. That was before I did a little more research. Turns out this seems to be a little better quality than what I almost bought and works just fine with the old SOYO motherboard. Should hold me now until I can fund a new gaming quality machine. This machine was built 9 years ago as a near bleeding, I mean cutting edge machine and is still strong with small upgrades and video cards and such. Cost wise it is approaching less than $200 a year now. The only thing that prevents playing newer games is the lack of a multi core processor. That will come in time.

Cons: DDR price is higher than the faster DDR2.

Overall Review: I decided to buy the last upgrade to my old A7N8X Asus mobo. I was running with 1 Gig. Upgrading to 2 Gigs gave new life to my equipment and so far the memory is working perfectly. Highly recommended.

Pros: This memory runs fine at the stated specifications (200 Mhz, 2.7V, 2.5-3-3-6). Popped in the memory and tested using Memtest86+ overnight with no errors at spec. When overclocking, it appears that milage will vary, and is probably a result of the specific environment created by the motherboard, processor, and memory. In my case, I am using this memory with the ASRock 775I65G R3.0 motherboard (865G Northbridge), and a Pentium Dual Core E5800. I have seen the following results: 1) When first testing memory settings with Memtest86+, using the "High" memory voltage setting (2.7V) and 2.5-3-3-6 timings in the Bios, I found that I started getting first pass errors at 227 mhz. I settled on 225 mhz to attempt to test using a Prime95 torture test in Windows XP. Prime 95 test failed within 10 min! I then restarted the Prime 95 test using 220 mhz and I ended it after it ran for over an hour with no problems. 2) I then checked to see if the timings could be tightened. Found out that the computer would not even POST when CAS is lowered to 2 at stock 200 mhz on the 2.7V setting. My motherboard cannot set the voltage higher than that, so I gave up on that project... 3) After playing with various iterations of timings and hi/low voltages, I settled with the 220 mhz speed (DDR 440, PC 3500) at stock 2.5-3-3-6 timings on the motherboard "High" (2.7V) setting. I had found that loosening timings did not allow me to run at higher frequencies without showing errors in Memtest86+. 4) My observation is the same as several others: That higher voltage doesn't appear to scale up the CAS or allow a huge overclock. It appears that the RAM is simply a quality, lower CAS DDR 400 RAM without much hope to go significantly faster than that. Again, I stress that this is MY experience on MY hardware combination. I have no doubts that other people with different hardware are seeing 233 mhz (DDR 466), 250 mhz (DDR 500), and higher stable overclocks.

Cons: If your memory runs fine at the stated specs, then how can there be any cons?

Overall Review: Chose this memory after deciding to build a new computer that could still run a Windows 9X operating system that I dubbed "Old Gamer". The idea for this project came as a result of my not being able to run old X-wing and Tie Fighter space combat simulation games in Windows XP or Windows 7. These games were improved ports of the DOS versions and specified Windows 95/98 as the required operating systems. Attempts to get them to run on higher Windows had failed, even when using the correct Windows compatibility settings. My goal was to build the most powerful system I could that would support Windows ME, and I stumbled on the ASRock 775I65G R3.0 motherboard (still offered by Newegg as of this date), which is a socket 775, 865G chipset motherboard supporting up to 2GB of DDR memory and is able to run most Wolfdale 800fsb/1066fsb processors as well as all the 800fsb/1066fsb Kentsfield and Conroe processors. To be able to run 1066 fsb processors, an AGP card must be used, as well as DDR 400 memory that MUST have a 2.5 or lower CAS latency. This was the only 2GB DDR memory set that fit the bill, so I purchased it. The result is a computer that screams when running any game produced between 1995 - 2005, and when using Dosbox, can effectively play 20 years' worth of old games! The computer specs: 1) ASRock 775I65G R3.0 Motherboard 2) Intel Pentium Dual Core E5800 (3.2Ghz, 800fsb, 2MB L2 Cache) 3) 2GB G.Skill DDR 400 CL2.5 (Model "F1-3200PHU2-2GBNS", sold at Newegg and requires higher voltage to run) 4) Nvidia Geforce 6800GS (the highest level video card officially supported with Windows 98/ME drivers that would work well with the motherboard) 5) LG DVD-RW SATA Optical Drive 6) 80 GB Samsung SATA HD 7) 160 GB Western Digital SATA HD 8) Generic Floppy Drive (still needed for installing Windows 98/ME) 9) Inland Gold 500W Power Supply 10) MSI S-8810 Case 11) Triple booting into Windows ME/ Windows XP SP3 / Windows 8.1 I hope I helped someone make a purchase decision.

Pros: Worked great in my ASUS A8N SLI Premium motherboard. Just make sure you set it to AUTO in the BIOS.

Cons: Should state outright that MUST be run @ 2.75v

Overall Review: I have an Asus A8R32-MVP Deluxe, which I was forced to buy open-box a year after my A8N-SLI Premium stopped posting and Socket 939 motherboards were extremely scarce, and bought this ram kit thinking I would be able to run Windows 7 x64 with 4GB of ram. Long story short, I updated multiple BIOS on board and realized that there was no way for the board to recognize all 4GB of ram (hardware memory hole nonsense will not load Windows), which I can deal with but I was getting BSOD all over the place. I assumed it was the $90 HDMI capture card and/or drivers but upon further inspection of mini-dumps WinDbg was blaming seemingly every driver. Ran Memtest for lest than an hour and got hundreds of errors. Finally saw a review here mentioning voltage being set @ 2.75 and all issues disappeared.

Pros: Purchased 2X1GB to augment existing 2X1GB; 4X1GB is the max supported by the 4600 mobo. Product arrived in two days via USPS. Installation was a breeze and it works fine. Excellent value for the money. Kudos, again, to NewEgg.

Overall Review: USPS tracking leaves much to be desired; however, delivery was very quick.

Manufacturer Response:
. Dear Customer Thank you for your G.Skill purchase and review. Glad to hear the memory is working well in your Dell computer. You will need to upgrade to a Windows 64 bit in order to recognize 4GB. Once you install it, the system will automatically show 4GB useable. If you have any further questions or issues, please feel free to let us know. Thank you GSKILL SUPPORT Quality and customer service are our top priorities. Tech Support Email: ustech@gskillusa.com RMA Dept Email: rma@gskillusa.com G.Skill Forum: http://www.gskill.us/forum/