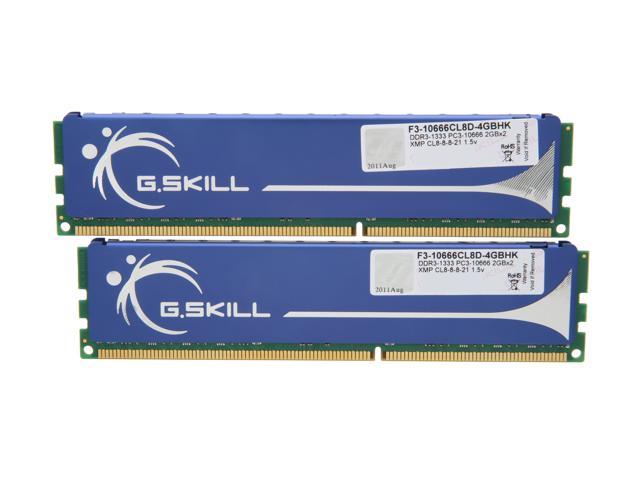 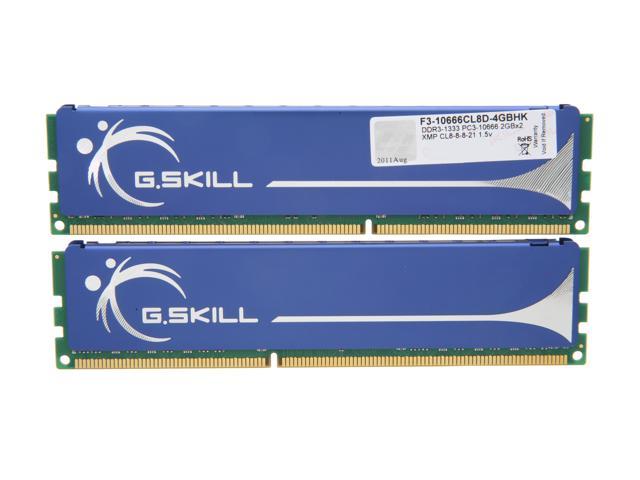 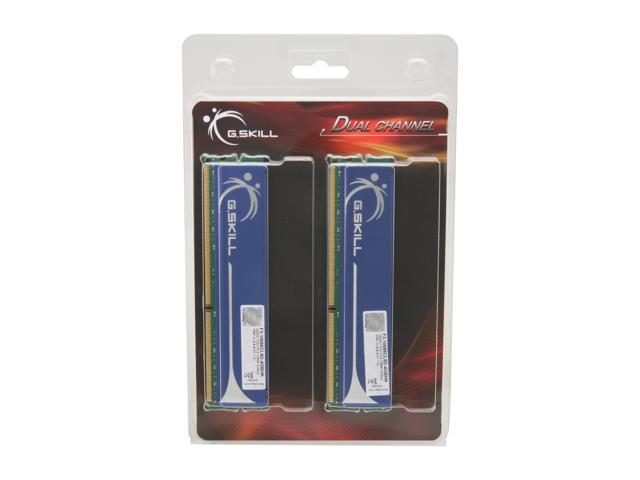 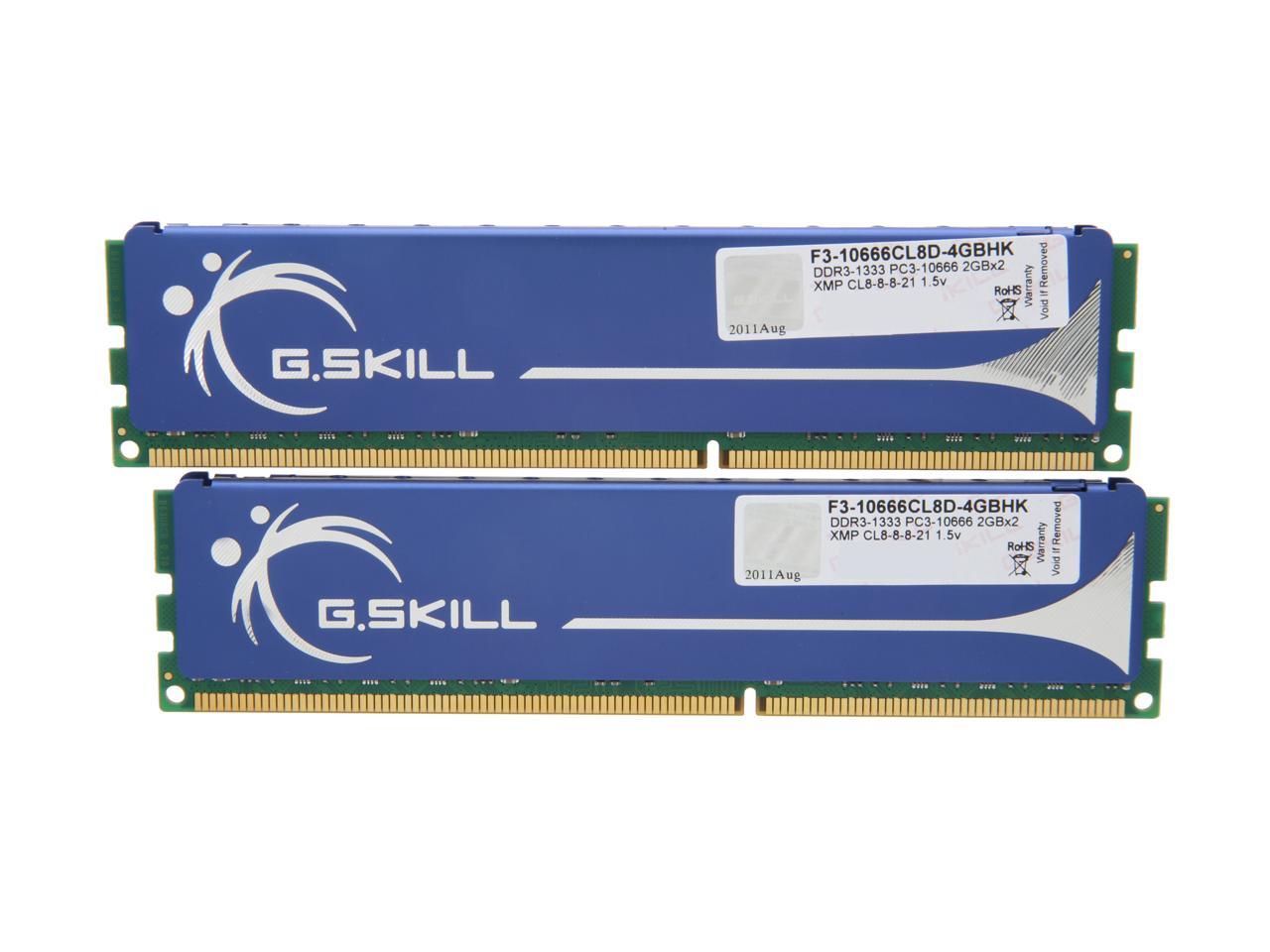 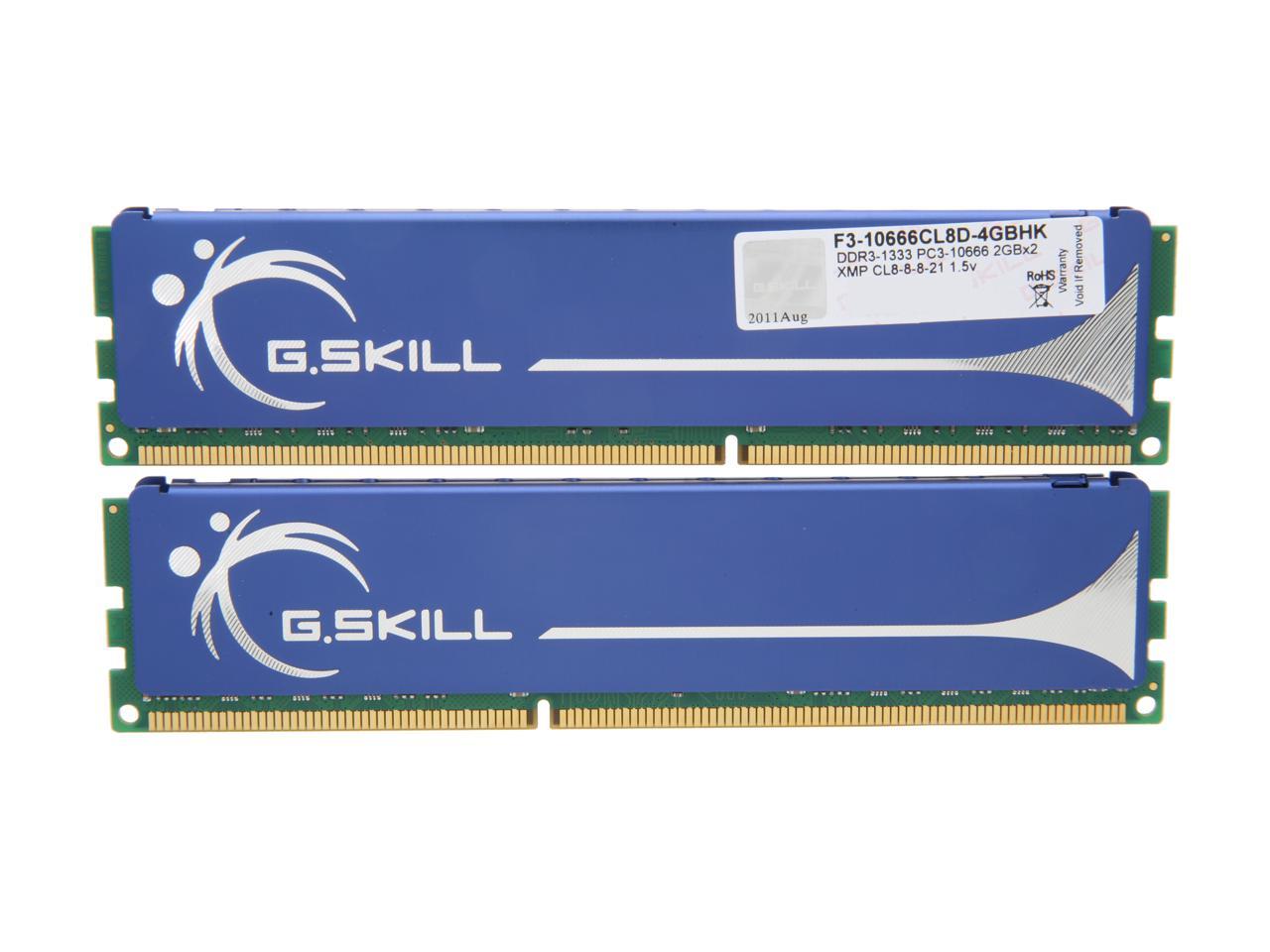 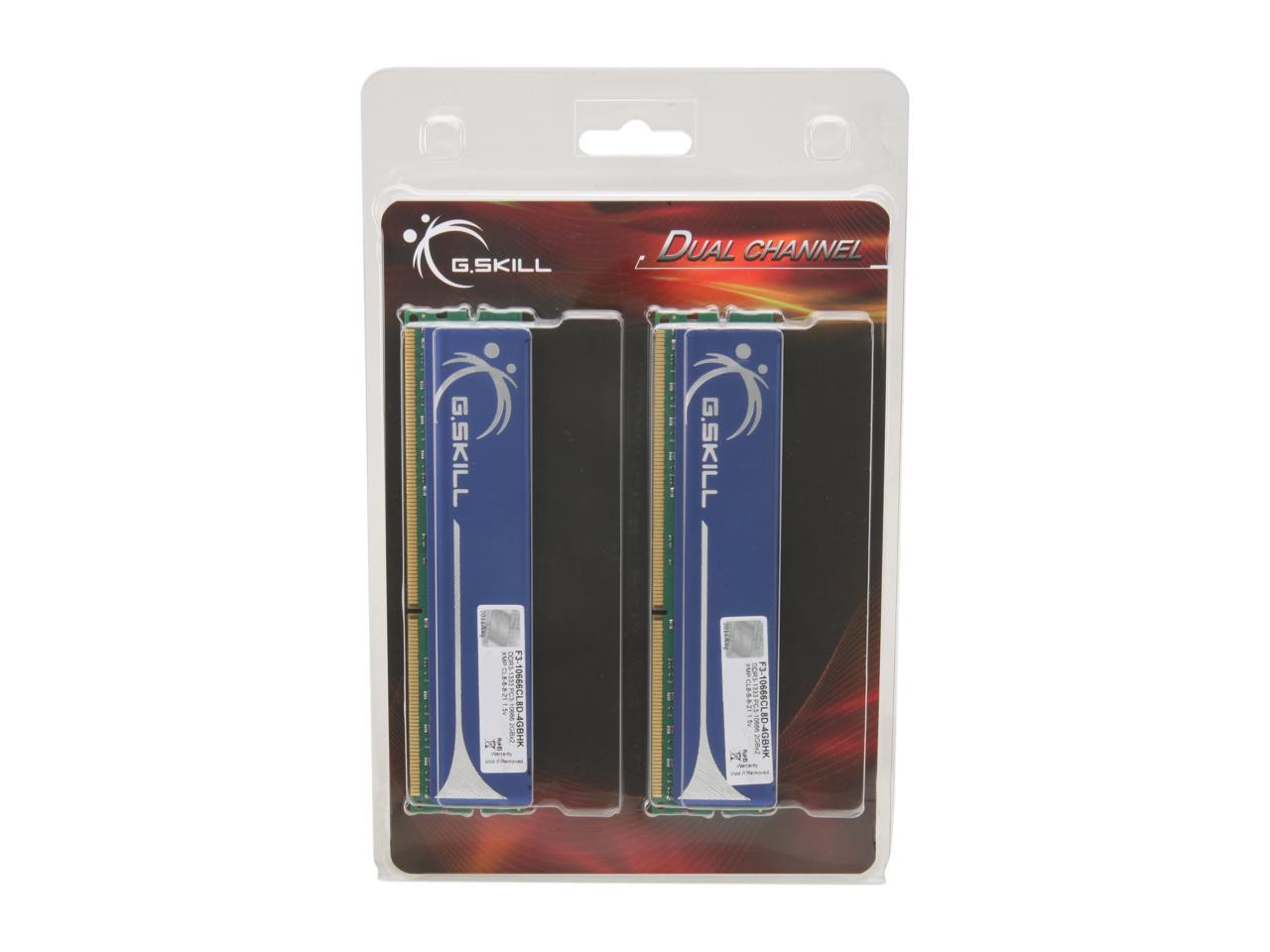 (436) Write a Review
OUT OF STOCK.
Overview
Specs
Reviews
Boost your system performance with this F3-10666CL8D-4GBHK kit from G.Skill. This 4GB (2x2GB) PC3-10666 kit will have your system screaming in no time. Included heat spreaders will keep your memory cool even when you're running your system flat out.
Tested and evaluated beyond most peoples' skills at tweaking, maybe you can be the one to push it to its 64-bit best! Rated at CL 8-8-8-21 standard timings, you'll find it hard to do better than G.Skill has managed to design for you!

Pros: A full 4096MB, stable, fast, blue, and G.SKILL make this RAM amazing. 4GB of RAM these days are still a great amount of RAM, for basic office work, to gaming (as long as you aren't trying to run maybe 3 copies of some demanding game at the same time). Also the RAM itself comes with nice looking, case-efficient heatsinks too (it's not the huge tall heatsinks some RAM has).

Cons: Heatinks won't easily come off, just in-case you were having the idea of taking them off and using thermal paste on them or something. Also, would of said hassle-free in the Pros box, but it was a hassle getting the RAM into the motherboard. Please note that this is probably not the RAM's fault at all, it could be the motherboard. For the best possible experience, I recommend installing your CPU, CPU cooler and paste, and RAM "before" putting the motherboard in your case.

Overall Review: Just wanted to share my experience with others, this is my 2nd review here. My platform is GA-55M-UD2 with 8GB of this memory, running Ubuntu 9.10. No overclocking and all voltages auto-set. The system with 8GB used to freeze unexpectedly. I was running Memtest for long hours - no errors. Switched to the 2x2GB mode and absolutely no freezes. With two other sticks (still 2x2GB) also no issues. Only 4x2GB did not work. Then I read (on gskill forums) about testing the sticks individually - that's how I found one of the sticks was bad. 4x2GB or even 2x2GB - no errors with memtest. Please test sticks individually placing them in slot 0. To get the most recent version of Memtest86 (ver 4.0) you could download the OpenSuse 11.2 Live CD. Other Linux distros still come with older versions. And even memtest's web page seems not to be up to date. It still great memory, I just was not that lucky. Already got a replacement set from newegg and the new sticks passed all tests fine

Cons: MoBo defaults to 8-8-8-24 timings. Memory threw errors in MemTest running at the 8-8-8 timings. G.Skill should include directions for how to update this, or at least a warning.

Overall Review: The very first thing you need to do when installing this memory is set the timings in your BIOS. Seems that every reviewer says the same thing. Their MOBO defaults this memory to the 8-8-8 timings. Why is that? The memory does not include any instructions or notification that this will happen. Once the timings are set, this memory is BLAZING fast! Ran MemTest for 3 hours with 0 errors. Another thing to keep in mind! This memory has the low profile heat spreaders. If I had gotten the other brand with the obnoxious tall heat spreaders, I could not have fit a Zalman CPU cooler into my machine. They would have hit each other. These fit just fine and leave about 1/2" of room between the ram and the fins of the cooler. I emailed G.Skill support and they responded in 3 days. Very friendly, very helpful. I'm confident in this memory and this company. Gigabyte GAMA785GMT-UD2H AMD Phenom II 550 BE Zalman 9700

Pros: It just works great so far. Easy install on my first complete build. After reading the other reviews I immidiately went into my bios and manually set timings to 8-8-8-21. Motherboard had set it to 9-9-9-24. Seams fast and no hickups yet. I'm happy.

Overall Review: Part of what sold me on G.Skill is the fact that they are concerned enough about customer satisfaction that they have a rep who hangs out here and responds to peoples problems. To me that say's a lot about this company. Thanks G.Skill.

Cons: I haven't been able to locate anything bad about the memory, the purchase process or RMA for this product. No Cons.

Overall Review: First Rev 1.1 4 GB pack I got was giving me an error with my ATI 48xx seriex video card. Uninstalling Catalyst Control Center & alternating the memory placement didn't help. Exchanging the memory did help, as did New Egg in their RMA Flash Gordon impersonation. This is just an FYI about this memory. Statistically speaking you're going to see a few mistakes slip the quality control from time to time. It happens. Well done.

Overall Review: I have to wonder about the post saying the this memory doesn't work in Gigabyte GA-MA790XT-UD4P motherboard. I have two of these boards with 8 gigs each and no problems!!!!!

Pros: Fast, much faster than i expected, even with just the one working stick. Works with my mobo (ecs a785gm-m). very nice looking.

Cons: computer ran like horrible until i noticed on bootup that the computer only saw 777 mb of ram so i took a stick out and it saw the 2 gigs, replaced that with the other stick and it wouldn't boot at all. plus i cant seem to get the timings to work but i don't think i have a clue what i'm doing so i'll just call their support and hopefully they can help. when i get the new ones.

Overall Review: Honestly when i first noticed the problem i was going to send it back for a refund and get some mushkin ram, but after using just the one stick for the weekend im pretty gosh darned impressed with this ram. If my returned set works i will definately be giving a 5 egg review

3 out of 3 people found this review helpful. Did you?
Manufacturer Response:
. Dear Customer We are sorry to hear one memory stick was defective. The new replacement should be much better. If you need assistance configuring the memory settings in BIOS, please feel free to contact our technical support department and they will be more than glad to assist you. We will make sure you our satisfied with not only our product, but also with our support and service. Thank you GSKILL SUPPORT Quality and customer service are our top priorities. Tech Support Email: ustech@gskill.com RMA Dept Email: rma@gskill.com G.SKILL Forum: http://www.gskill.com
Milo D.
Ownership: 1 week to 1 month
Verified Owner
Not the same memory for upgrades1/26/2016 2:54:30 PM

Cons: Bought because was matching numbers to what I had bought a few years ago. Same part # but not matching configuration, old modules were DS, new ones are SS and the bios won't even recognize the new memory. Too bad gskill is turning cheap. I've used their memory for years and not had compatibility issues using same part # modules for upgrades.

Overall Review: Guess its back to crucial.

2 out of 2 people found this review helpful. Did you?
Manufacturer Response:
. Hi Milo Glad to hear you like the appearance of the RAM. The sleek blue heat spreaders can add a nice look to any system. With regards to your compatibility issue, unfortunately older system may have a problem with the latest single sided RAM. With new DDR3 inventory, you will no longer find double sided 2GB modules, and very rarely 4GB modules. The old chips are no longer produced as technology has advanced quite a bit since the initial release of DDR3 RAM. This is the same for any memory brand, so you will encounter the same issue unless you look for some older production or used memory. For any further questions or concerns, please feel free to contact us directly. Thank you GSKILL SUPPORT Quality and customer service are our top priorities. Tech Support Email: ustech@gskillusa.com RMA Dept Email: rma@gskillusa.com G.Skill Forum: http://www.gskill.us/forum/