Feel 100% satisfied with your purchase -- with no restocking fees & no return shipping costs* within 30 days of delivery. Learn More
Newegg’s gift-wrap service is the ideal solution for making your gift special! Select your item as a gift, then add your message. Your gift will also be discreet with no prices being included on the packing slip.
Price Alert
Add To ListFound on 3 wish lists 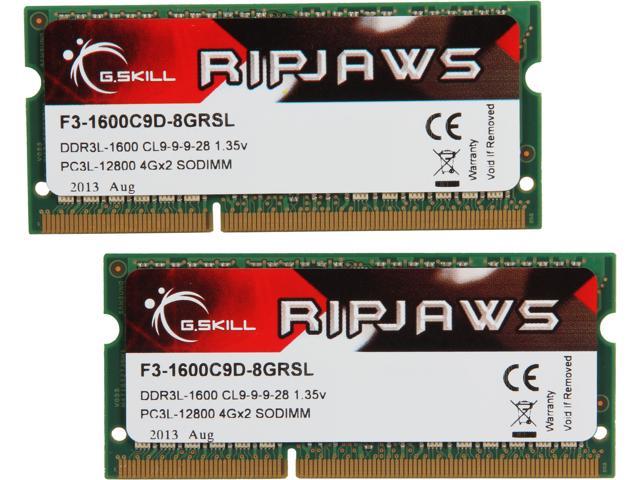 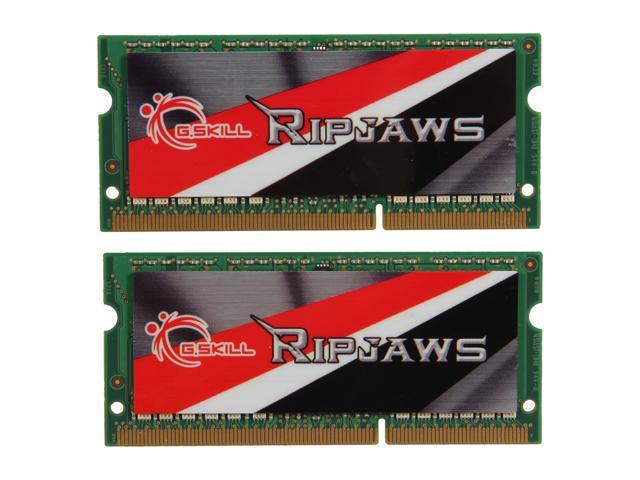 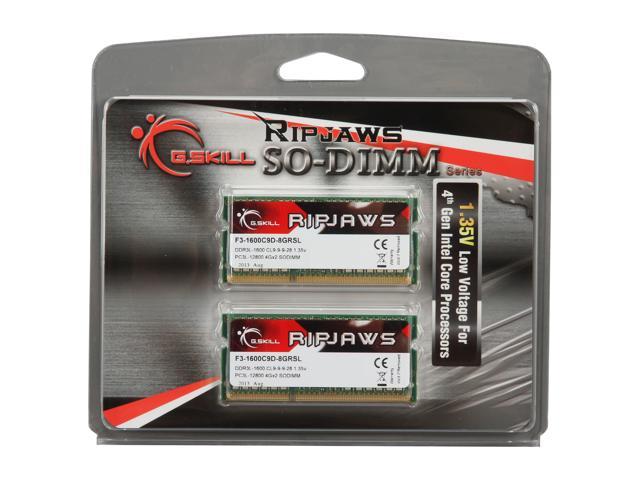 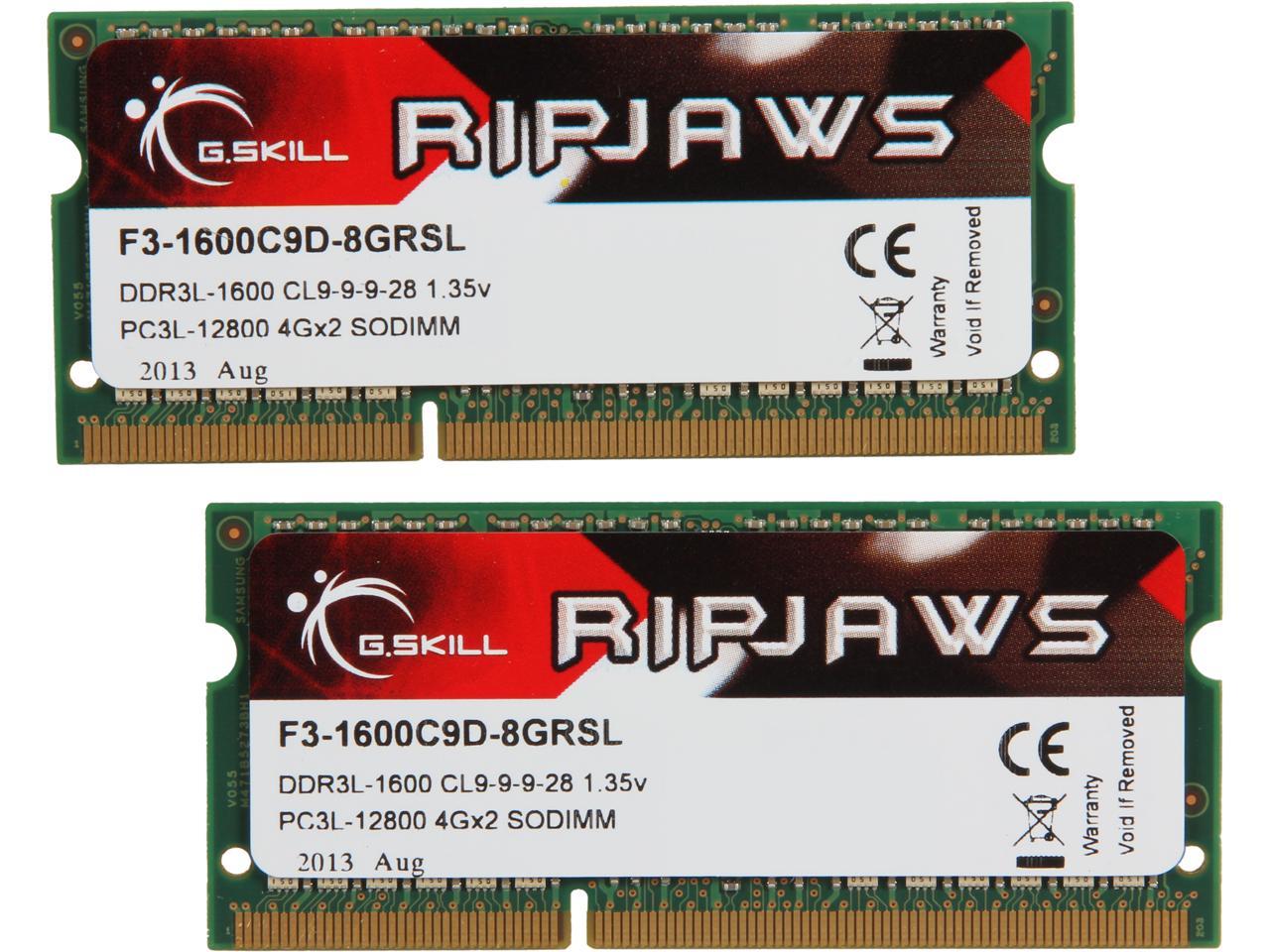 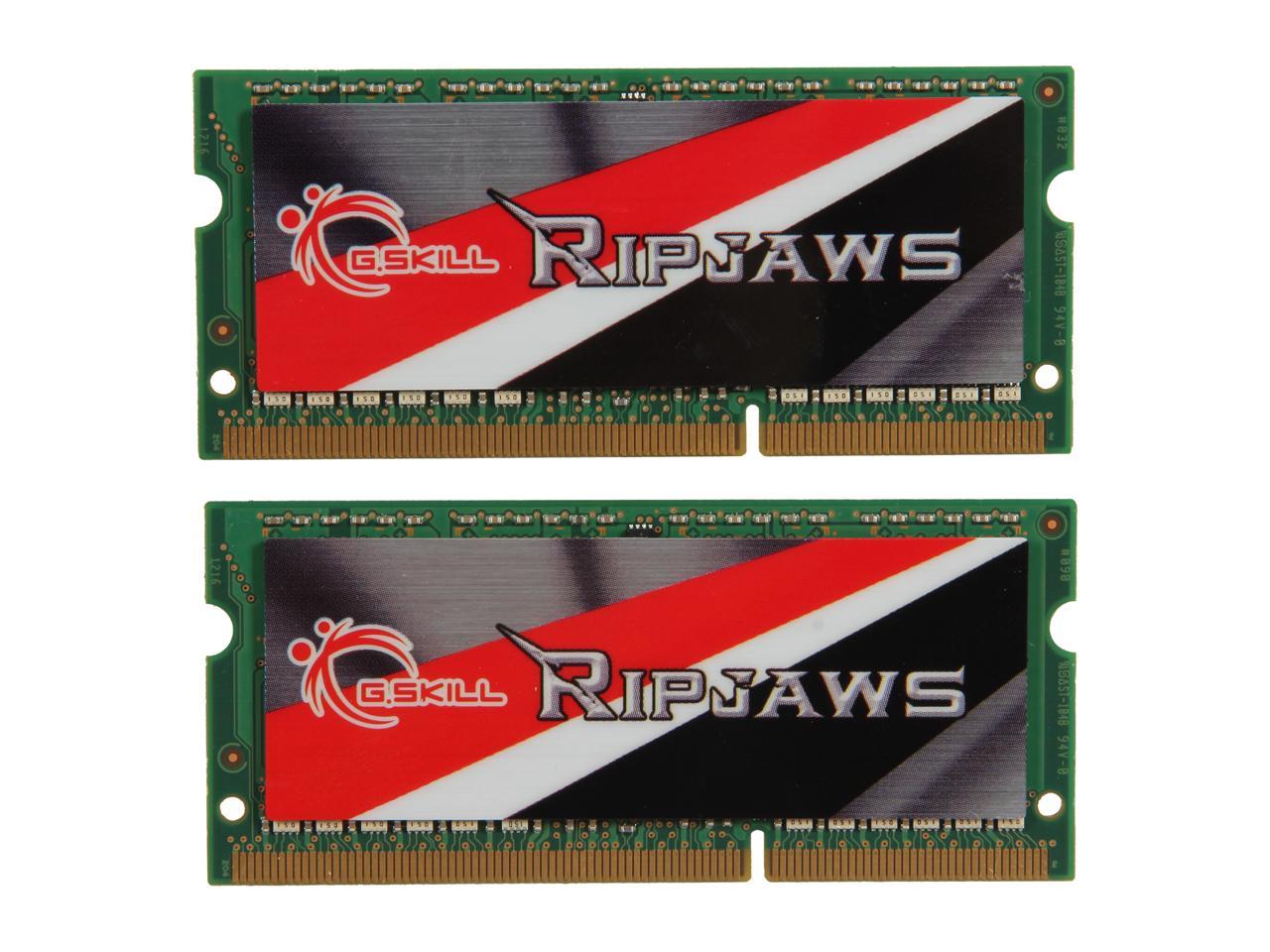 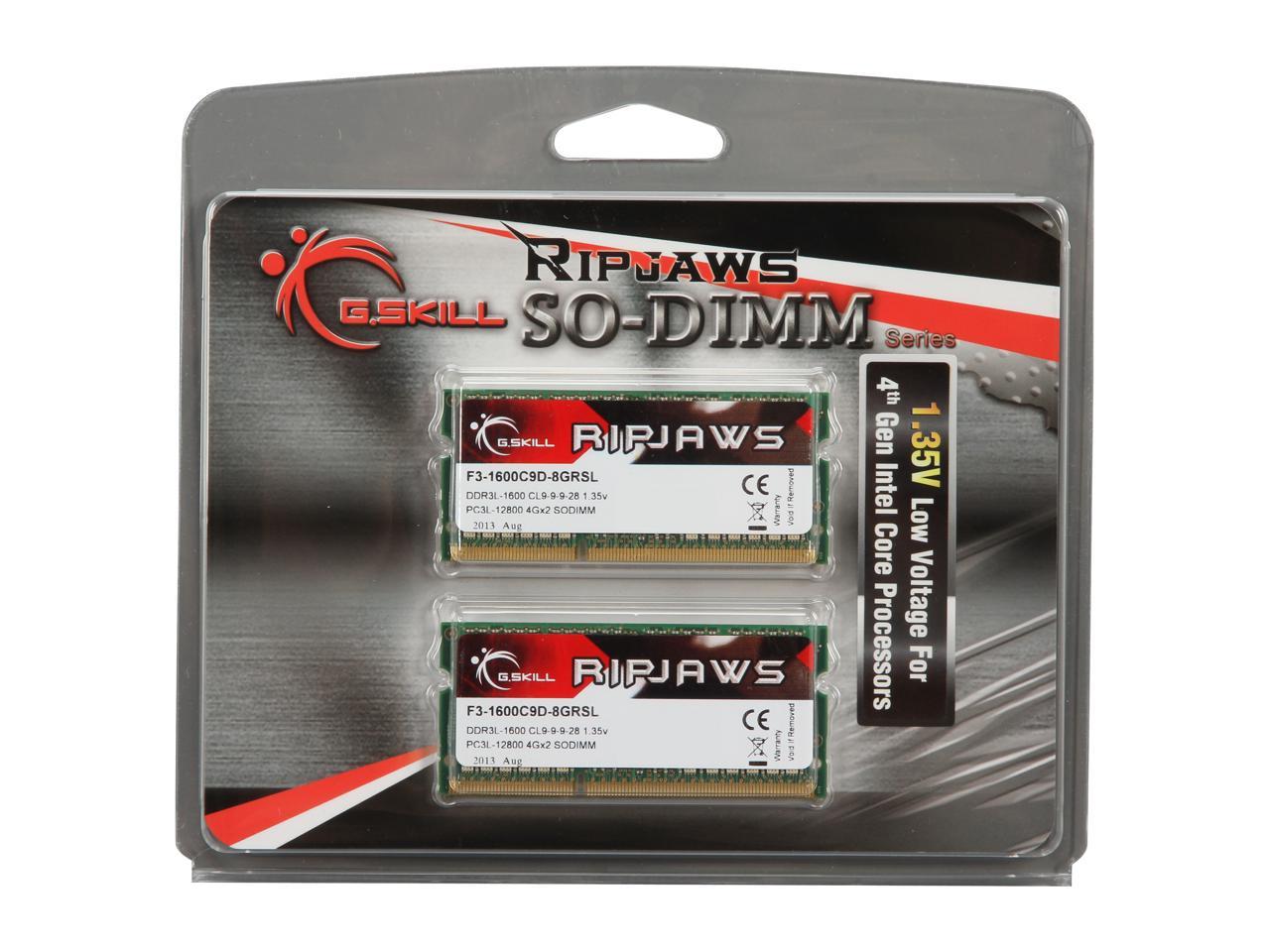 The G.SKILL Ripjaws Series memory kits help enhance your productivity and computing experience on your laptop. It works at an ultra low voltage of 1.35V, and delivers fast speed and low latency to address your daily needs in work and entertainment. Quality components and construction ensure stability and durability you can count on in demanding situations.

James A.
Ownership: 1 month to 1 year

Pros: I have a 2 year old I5 laptop that was starting to experience long load times and generally sluggish performance. It uses HD 4000 integrated on-chip graphics. My Windows Experience core for gaming and Aero was 3.6 and 3.5, respectively. After installing this set of RAM my score went up to 6.5 and there is an enormous boost in general performance. I thought I might get a little boost in performance, but, this is fantastic!

Overall Review: G.Skill will not let you down! I've never purchased a bad chip from them and I don't think I ever will.

Pros: Two sticks with 4GB each. They run at a nice speed of 1600 without raising the timings extremely high. The timings remain 9-9-9-28. Low Voltage 1.35v. This does not really help much to reduce power consumption, because it is a small amount, but it might add a few minutes over a few hours. Every little bit helps. Looks pretty good. Life Time Warranty Comes with G.Skill case sticker. Amazing deal on Black Friday. Paid a total of $45!

Cons: Only real con is that the heat spreaders are not what I expected. I honestly think that there is more metal in the case sticker, but they seem pretty similar. In other words, its more a sticker on the RAM to cool it, not any actually metal to help conduct heat away. Shipping took forever, but not Newegg or G.Skill's fault. It was USPS who I think lost the order temporarily.

Overall Review: I wish I have got to test this RAM a bit more. I have had it for a while, but with various things going on this time of year I have not used my laptop much. It has made the system feel a lot more comfortable in terms of performance. Its a lot closer to the performance of my desktop now whenever you are doing basic tasks like internet. I would highly recommend these RAM stick.s

Pros: This review is more about Gskill's support than about this particular product. I bought two sets of this memory back around the 2014 holidays for my Dell Latitude E6410s. This memory does not work properly in the Dell E6410. use G.Skill F3-8500CL7D-8GBSQ instead. I didn't get around to installing it until mid 2015. It seemed to work properly, but both laptops suffered what appeared to be hard drive failures (Windows OS corruption?) within a couple of weeks. When I installed a new hard drive, I found that the Windows 7 OS installer wouldn't run. After troubleshooting (different disk, different DVD module, etc, finally, put back old memory) I found that this memory doesn't actually work properly in my E6410. I contacted G.Skill and politely asked them if there was anything they could do for me. While it has a lifetime warranty, this isn't defective memory; I bought the wrong thing. I was well past the Newegg exchange period. Without any argument, they immediately told me to arrange for an RMA and which memory to request as a replacement. I submitted the RMA and within a brief period received the replacement memory, which is working properly.

Cons: I thought I did my research before purchasing. I thought that faster memory would just be run at slower speeds in an older computer, but apparently, the timing is just a little bit too far out of whack. My more recent research suggests something about CAS latency incompatibility. Anyway, the only reason this is a con is that Gskill's website does not have an easy RAM selection guide. However, if I had checked Newegg's "Memory Finder" it would not have recommended this Model F3-1600C9D-8GRSL memory. G.Skill does have a page on which you can list memory specifications to get a listing, which makes good sense, unfortunately, Dell doesn't make it easy to find such technical specifications on what is compatible and not compatible.

Overall Review: The quick summary is: 1) I bought the wrong thing and G.Skill fixed it for me fast and easy. 2) It was more difficult than I'd like to figure out what the right thing is, but with a little more care, I could probably have avoided the mistake. 3) In any case, kudos to G.Skill's support department.

Pros: Typical G.Skill quality and performance! Recognized by bios running advertised specs without any issues. Passed 1 hr of HCI Memtest running 96% memory load across four instances (250%). Replaced the factory 1x4GB stick of cas 11 1.35v with this 2x4GB cas 9 1.35v kit. In Windows 10 Pro x64 memory usage dropped from mid, to upper 40% with only one tab open in Firefox to a nice stable 23% with six tabs open. Could have opened many more and not noticed a thing. Next, a budget SSD (also from Newegg) was added and now this 6570b will be around for a long time to come. It simply flies!

Cons: Not a con but an observation. When shopping for Laptop memory if you use the Newegg Memory Finder you won't find this kit, or any G.Skill memory listed for a HP 6570b. If you use the G.Skill Ram Configurator you can only search by mobo which doesn't reliably help the novice with a laptop. If I wanted to sell my product I would make it easy to find for all systems (G.Skill), and cover most all the brands I carry (Newegg). I have to wonder if I'm the only one who notices this. Fortunately I know how to choose/locate memory. I think if this shopping process was upgraded there would be fewer negative reviews by consumers making an uneducated purchase than placing blame on the manufacture.

Overall Review: I have recommended both Newegg and G.Skill for many years and will continue to do so. Never had any issues with either. In the past 10 years I can only remember RMAing one memory kit with G.Skill and it was completely painless. (well over 30 kits)

Pros: The RMA process was fairly simple, and the replacement was prompt, if useless.

Cons: Both DIMM's failed memtest. And I don't mean they reported errors, I mean memtest hit some exception and couldn't even *start*. I tested them on another laptop (from a different manufacturer) to make sure that it wasn't something odd about mine, and the other laptop just ignored it, like it wasn't even plugged in. I got an RMA replacement, and the replacement fails with exactly the same behavior. I'd send it back again, but after a few rounds of this, the cost of shipping would exceed the cost of buying another brand.

Manufacturer Response:
. Hi Kyle We are sorry to hear you had such issues. Most likely the RAM was not defective. This performance memory kit is not fully supported for any laptop. When experiencing strange issues, first make sure you have the latest BIOS. Then test one module at a time to see if a stick performs differently than the other. There are two memory modules and the likelihood of both being defective is extremely rare. So if both modules cause the same exact problem, it may be a compatibility issue. If one works fine and the other does not, then you know it is simply a defective stick. In the future, for any issues like this, please don't hesitate to contact us directly. The G.Skill support team is readily available to make sure your laptop is upgraded and working flawlessly with G.Skill RAM. Thank you GSKILL SUPPORT Quality and customer service are our top priorities. Tech Support Email: ustech@gskillusa.com RMA Dept Email: rma@gskillusa.com G.Skill Forum: http://www.gskill.us/forum/
Odena R.
Ownership: 1 day to 1 week
Verified Owner
Works Great in my QNAP12/3/2014 5:23:25 PM

Pros: Fast, up-to-date on voltage, super fast. Lifetime warranty. I replaced a client's laptop that had 4Gb ram with this 8GB and wow what a difference. My client is very happy! I have used many brands in the past and I will only buy G.SKILL now. For the past 2 years they have yet to let me down on any of their products.

Overall Review: I build computers and have used many brands, G.SKILL has been the only brand that I have yet to do an RMA on. I know why they offer lifetime warranty, because you won't have to use it.

Pros: My windows 8 memory score went from 5.2 to 6.9 by replacing my old 4gig stick of pc1333 ram that came with my laptop with these bad boys, and now my laptop runs wayyy faster!